The storms’ silver lining: MIBEL registered the lowest price of 2020 thanks to the wind energy

AleaSoft, March 2, 2020. The storms that hit the Iberian Peninsula brought great wind energy production in the windiest days. The increase of the wind energy, together with a decrease in electricity demand due to the rising temperatures, made the MIBEL market register the lowest daily price so far this year. At AleaSoft, the price is expected to increase in the main European markets for the rest of the week.

Unlike the widespread rise in solar energy production during the week of February 17, last week was marked by its decrease in most European electricity markets. The German market had the only increase of the week, of 13%. The most important falls were registered in the markets of France and Portugal, of 25% and 19% respectively. For the cases of Spain and Italy, the decreases were 3.2% and 7.4%.

At AleaSoft it is expected that during the course of this week the solar energy production will be lower than last week in Spain and Italy, but higher in Germany. 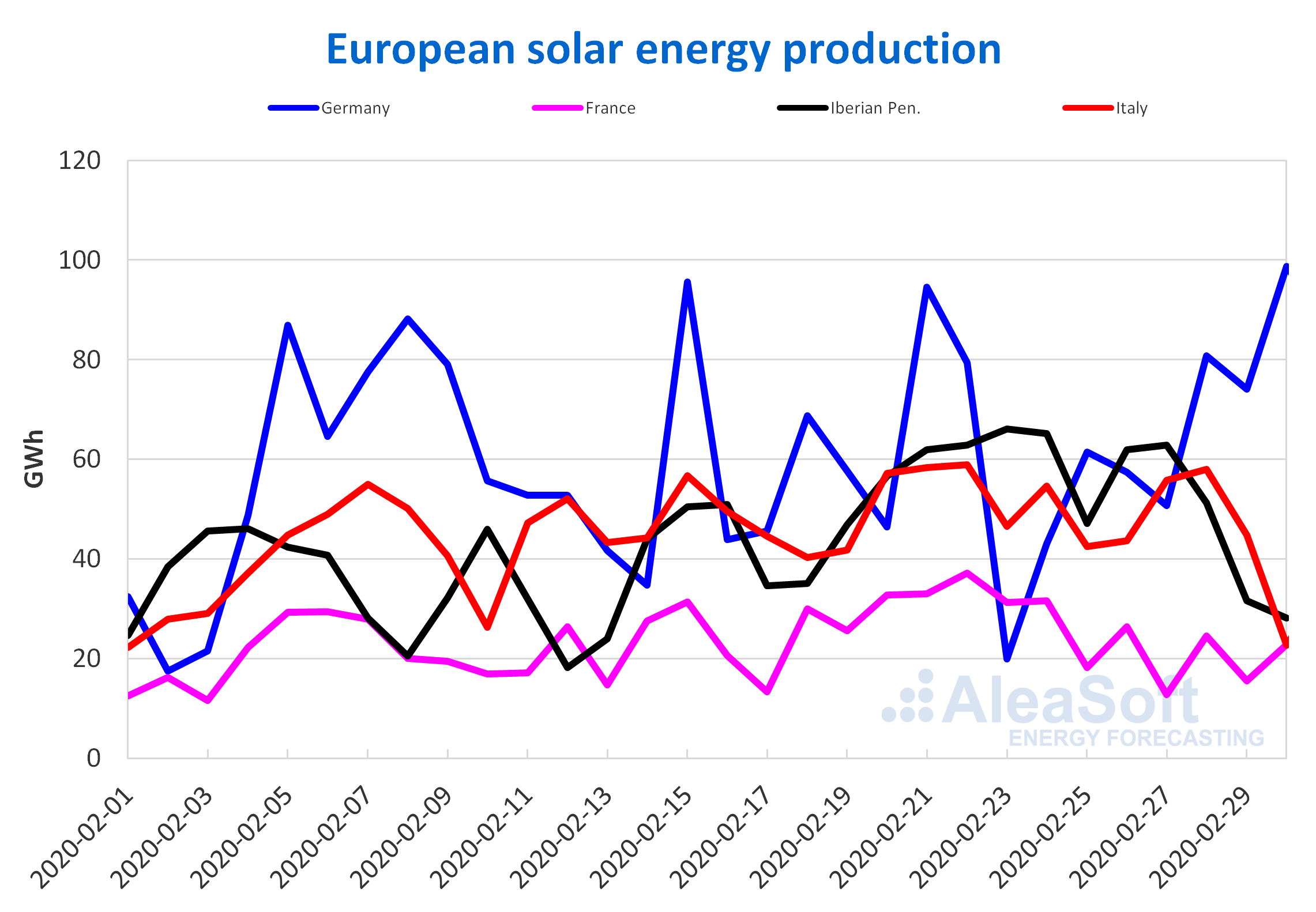 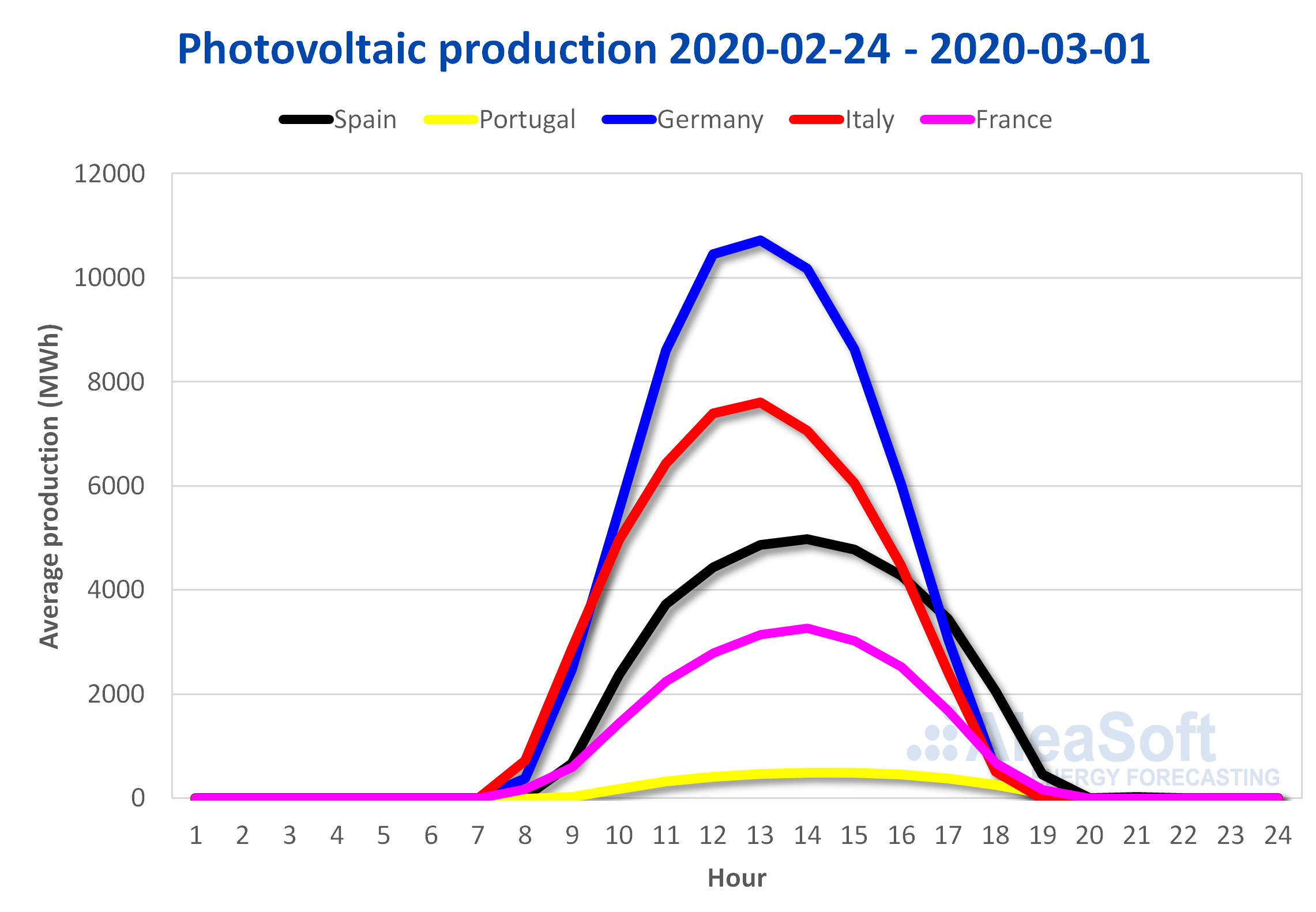 The strong winds caused by Storm Jorge during the weekend over the northwest of the Iberian Peninsula, led to a weekly increase of 142% of wind energy production in Spain and 122% in Portugal. The generation from this renewable source amounted to 77% in Italy and 16% in France, while in Germany there was a fall of 25%.

For this week, the arrival of Storm Karine is expected in the Iberian Peninsula, so the wind energy production of this territory is expected to continue increasing. On the other hand, at AleaSoft it is expected that decreases will occur in several of the other analysed markets. 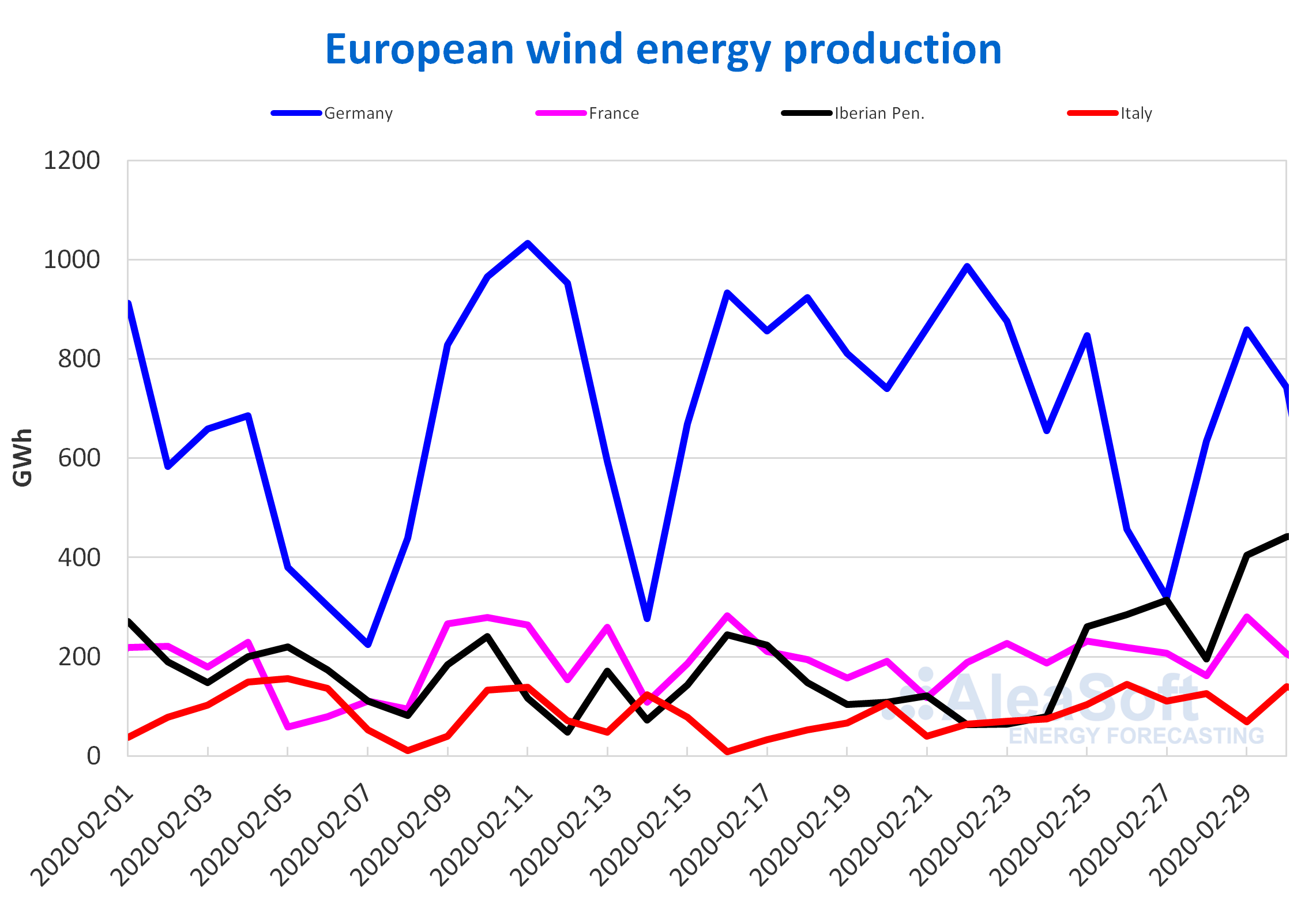 A disparate behaviour was shown by the electricity demand last week in the European markets. In the Spanish market, the most influential factors in the 1.5% drop were the 1.6 °C increase in average temperatures and the labour effect of the holiday of February 28 in Andalucía. When correcting this effect, the decrease was 1.0%. A similar case was that of the 3.3% decrease in Portugal, due to the joint effect of the 1.0 °C rise on average and the carnival festival on Tuesday, February 25. Correcting the influence of the holiday, the variation represented a 0.9% rise. Other markets that registered decreases in electricity demand were Germany and Italy, with 2.9% and 1.5% respectively.

However, the fall in average temperatures caused the rise in demand in other markets of the continent. Such were the cases of France, Great Britain, Belgium and the Netherlands, which registered increases of 2.1%, 3.5%, 1.9% and 2.3% respectively.

Electricity demand values similar to those of last week are expected for this week as well, with increases in some markets due to colder temperatures. 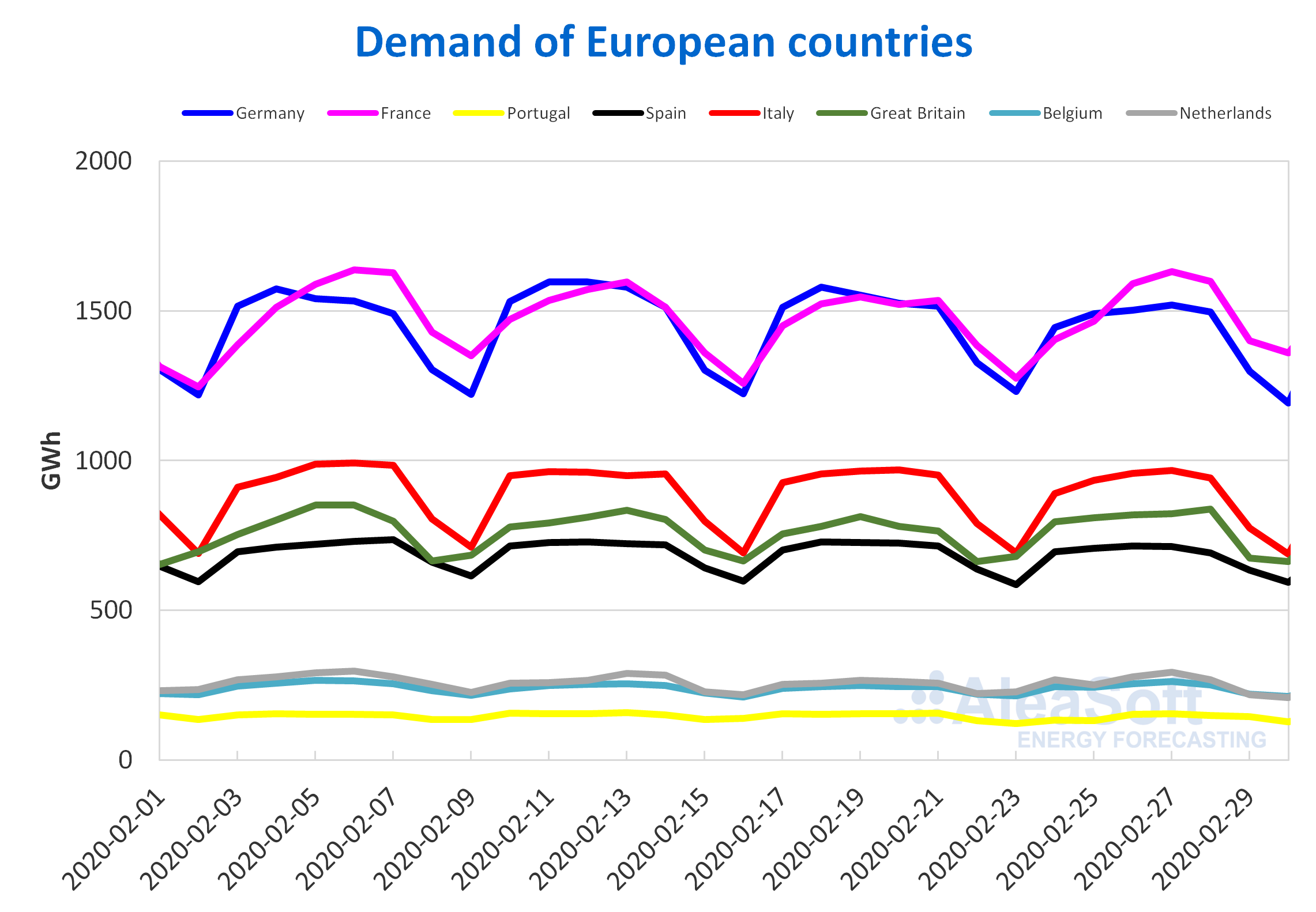 Last week of February 24, the European electricity markets presented several interesting events. Except in specific cases, the average price of the week was very similar to that of the previous week, with differences in the weekly average below €3/MWh in most markets. However, those specific cases are what made the week interesting. On the one hand, the EPEX SPOT market in Germany ended the week with an average price €5.76/MWh higher than the previous week of February 17. But the interesting thing is not that the price of the German market was especially high during the week just concluded, but that during this weekend no negative daily average prices were reached, which did occur in the previous two weekends.

On the other hand, the most interesting case of the week is that of the MIBEL market in Spain and Portugal. The average price for the week of February 24 fell by more than €10/MWh compared to the previous week. The price of this market during this weekend was €16.60/MWh on Saturday, February 29 and €14.22/MWh on Sunday, March 1, corresponding to the lowest daily price record so far this year. The price obtained at the 5th hour of March 1, of €5.64/MWh, was close to the record for the lowest hourly price of this year, of €5.10/MWh, registered at hour 17th of February 16. 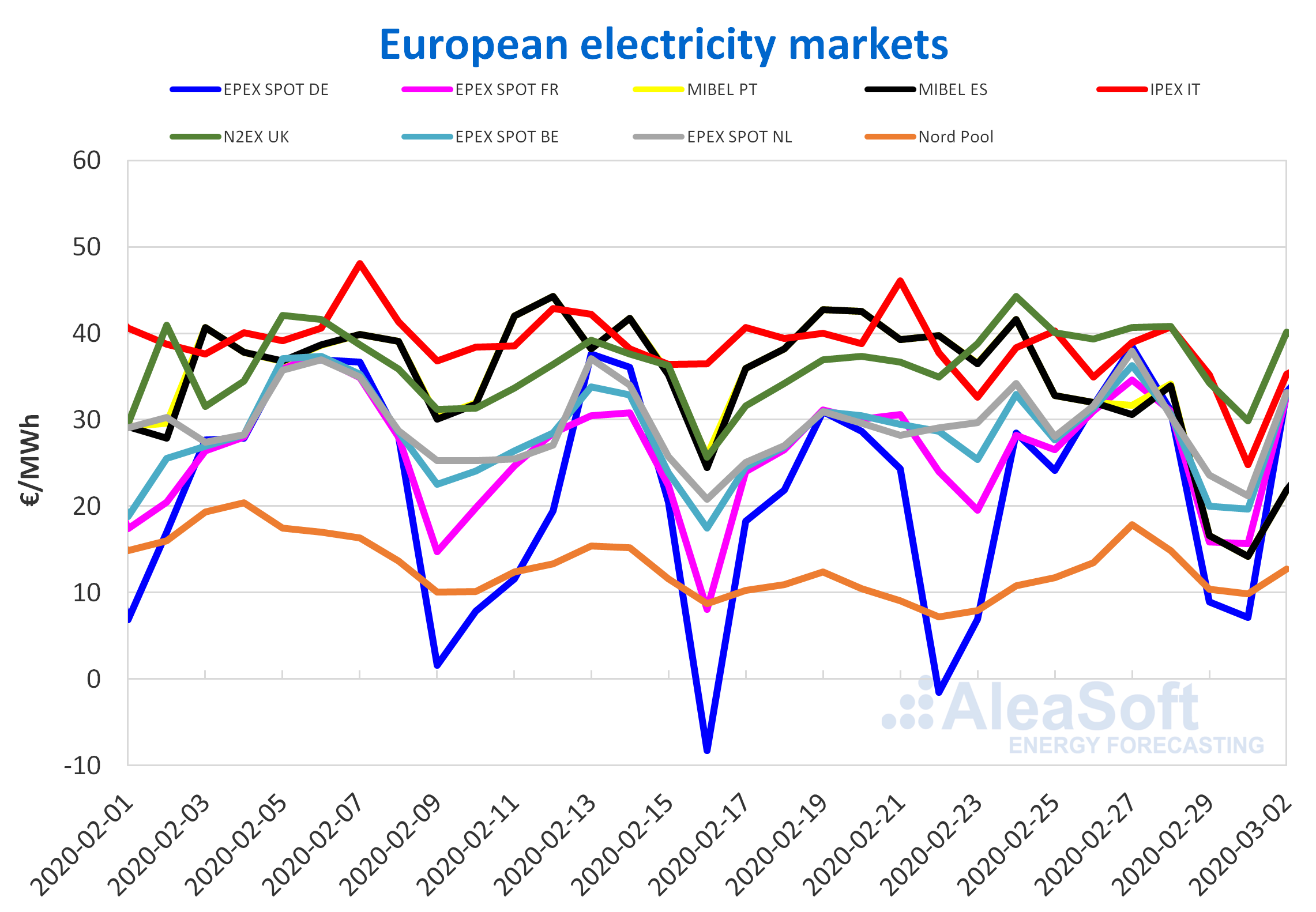 These price decreases are mainly due to a decrease in electricity demand, due to the increase in temperatures, and a considerable increase in wind energy production caused by the storm Jorge.

The markets disposition in terms of price for this Monday, March 2 is quite atypical. The MIBEL market is the second lowest priced market, behind the Nord Pool market of the Nordic countries. This week starts with the group of the lowest priced markets made up of Spain, Portugal and the Nordic countries, while the EPEX SPOT markets in Germany, France, Belgium and the Netherlands, and IPEX in Italy, are quite clearly coupled around at €33/MWh, to form the group of markets with the highest price next to the N2EX of Great Britain, which is positioned as the market with the highest price, settling on Monday with a price of €40.13/MWh.

For this week, the price of most markets is expected to increase, as a result of lower temperatures that will increase the electricity demand.

The electricity futures prices for the second quarter of this year registered an increase close to 18% in the ICE and NASDAQ markets of the Nordic countries, but still remain as the lowest of this product among the analysed European markets. In the rest of the markets analysed at AleaSoft, the prices of this product decreased on Friday, February 28, compared to the previous Friday. The fall of more than €4/MWh in the EEX market of Italy, those of the ICE markets of the Netherlands and Belgium with variations of ‑9.1% and ‑7.9% respectively and those of the EEX markets of Germany and France that fell more than 8%, also stand out. In the OMIP and EEX markets of Spain and Portugal the variations were close to ‑5%, while in the EEX and ICE markets of Great Britain the declines were close to 3%.

The electricity futures prices for the year 2021 settled last Friday with variations of between -5.7% and 1%. The biggest differences were registered in the EEX markets of Germany and ICE of the Netherlands and Belgium, with falls close to 6%. On the contrary, in the ICE and NASDAQ markets of the Nordic countries there were increases in prices close to 1%. In the rest of the analysed markets, falls of between 4.6% and 2.7% were observed.

The prices of Brent oil futures for the month of May 2020 in the ICE market declined during the past week, reaching a settling price of $49.67/bbl on Friday, February 28. This value is 14% lower than the Friday of the previous week and the lowest in the last two years. The effects of the coronavirus epidemic on global oil demand are influencing price developments, but this week the OPEC+ meets in Vienna and could agree to new production cuts that prevent prices from continuing to decline.

The settlement prices of TTF gas futures in the ICE market for the month of April 2020 stood below €9/MWh during almost all last week, except on Wednesday, February 26. That day the price reached was the highest of the week, of €9.01/MWh. On the other hand, the minimum price last week was that of Thursday, February 27, of €8.80/MWh, which is also the lowest of the last two years.

Regarding the TTF gas prices in the spot market, they started last week with an index price of €9.51/MWh on Monday, February 24. But this weekend was €8.95/MWh, 5.3% lower than the previous weekend. Today, March 2, the index price recovered and reached a value of €9.01/MWh.

On the other hand, the prices of API 2 coal futures in the ICE market for the month of April 2020 last week ranged between $48.25/t on Wednesday, February 26 and $47.45/t of the Friday, February 28, which is the lowest settlement price of the last two years.

The concerns about the effects of the coronavirus expansion on electricity demand, along with high supply levels and low gas prices, are influencing this evolution of coal prices. However, in the coming weeks there could be strikes in the mining areas of Colombia, which could prevent prices from continuing to decline.

As for the CO2 emission rights futures prices in the EEX market for the reference contract of December 2020, during most of last week they registered decreases, which were between 1.6% and 4.1% As a result, on Friday, February 28, the settlement price was €23.61/t, 7.8% lower than the Friday of the previous week. The start of US auctions by the United Kingdom could cause prices to continue falling in the coming days. 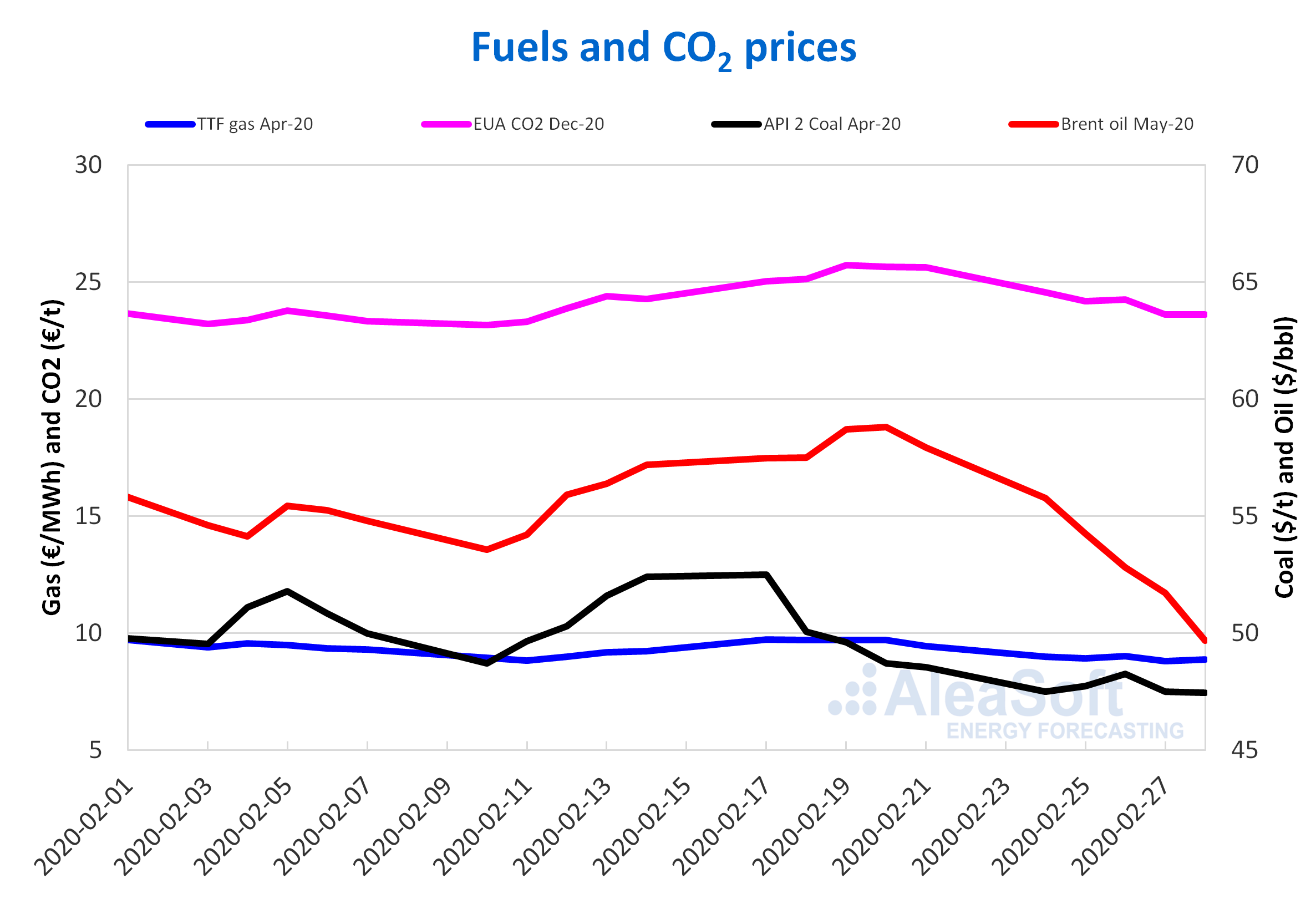