The solar energy production increased in all European markets

AleaSoft, February 24, 2020. The solar energy production increased widely in the European markets last week. However, in the case of the wind energy production, the declines predominated, which led to the rise in prices in most markets. On the other hand, in the German market, the high wind energy production caused again negative prices over the weekend. This week the prices are expected to rise in most of Europe.

The solar energy production in the European markets was higher last week compared to that of February 10. In Spain, the generation with this technology maintained an increasing behaviour during all the days of the week, increasing by 32% compared to the previous week. The other significant increases occurred in the markets of France and Portugal, whose increases were 31% and 42%.

Comparing the days from February 1 to 23 with the same period of 2019, the solar energy generation rose 28% in the Iberian Peninsula and 6.8% in Italy. On the other hand, there were falls in France and Germany, of 3.1% and 15% respectively.

For this week, declines in solar energy production are expected in the analysed European markets. 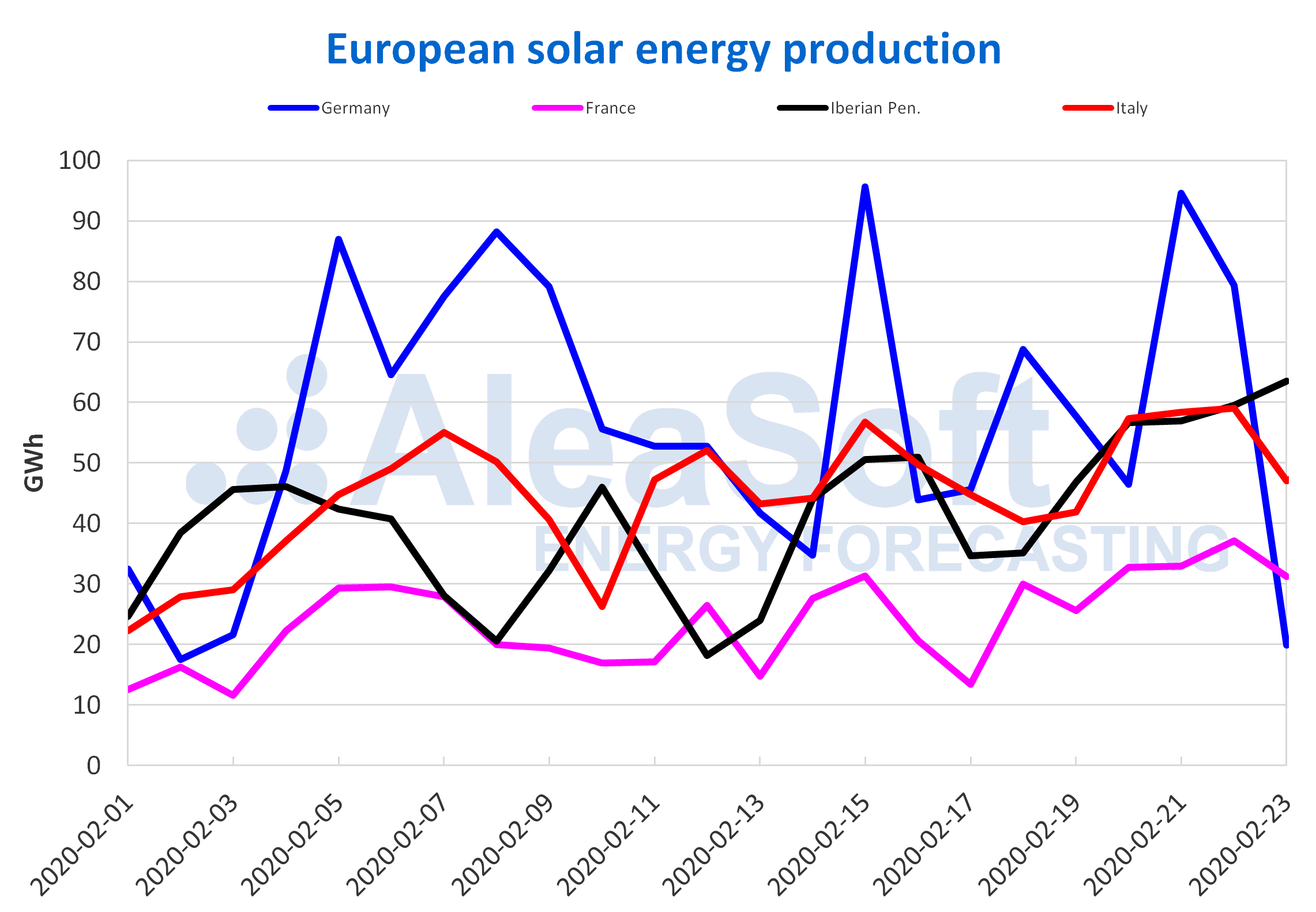 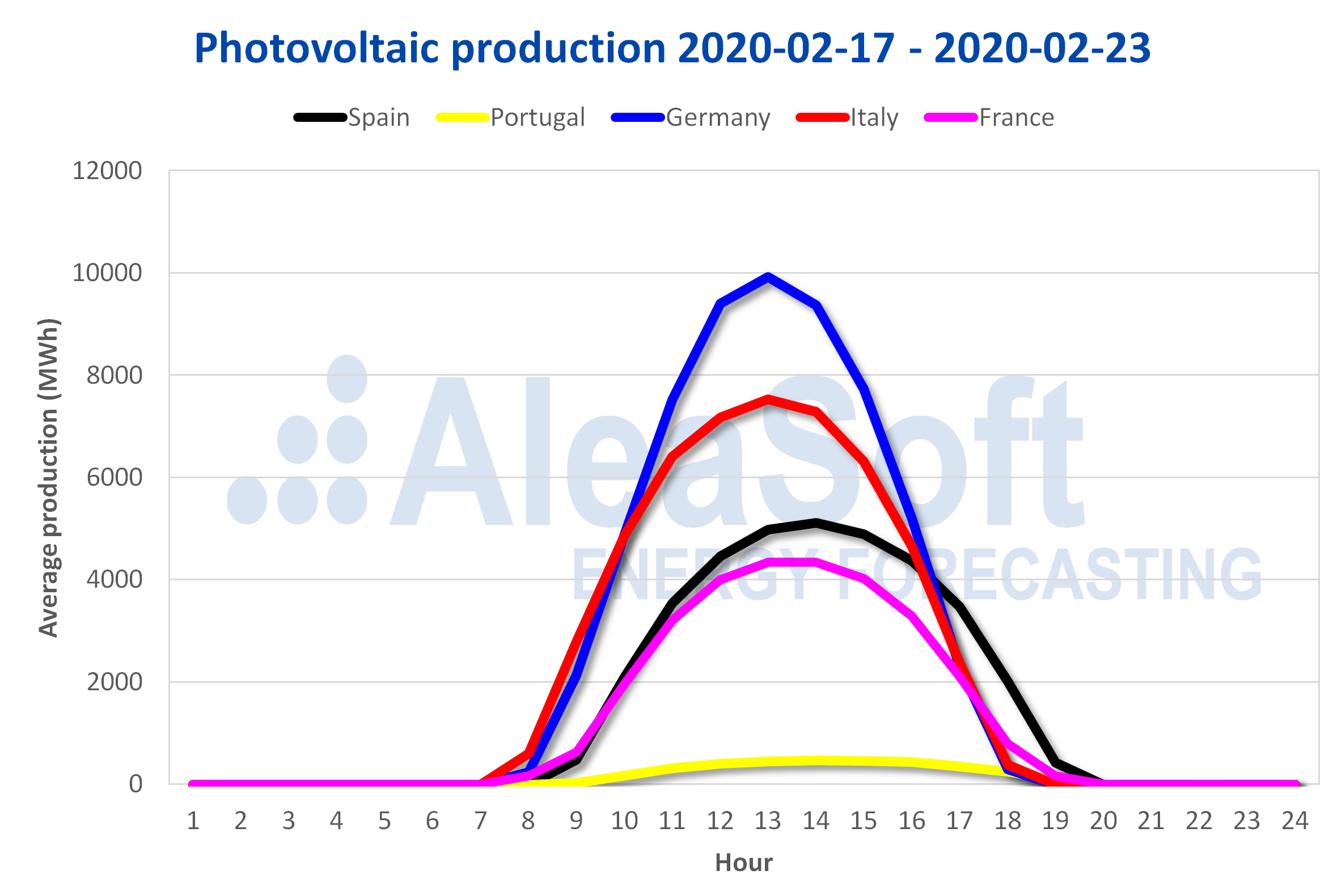 Regarding the wind energy production, the behaviour was mostly decreasing during the last week compared to the previous one. The Italian market suffered a 28% drop, as well as France and the Iberian Peninsula, which registered declines of 16% and 19%, respectively. On the other hand, the production with this technology in the German market was above the average 775 GWh of the week of February 10 almost every day of the week just finished, which led to an increase of 12%.

In year‑on‑year terms, the wind energy production of the first 23 days of February fell in a large part of the electricity markets of Europe. The declines were 8.8% in Spain, 28% in Portugal and 2.4% in Italy. However, the markets of Germany and France continued to have favourable balances in this regard. In the first of these markets the increase was 71%, and in the second the production doubled, with an increase of 101%.

At AleaSoft it is expected that this week the wind energy production will increase in most markets, and it will decrease slightly in Germany. 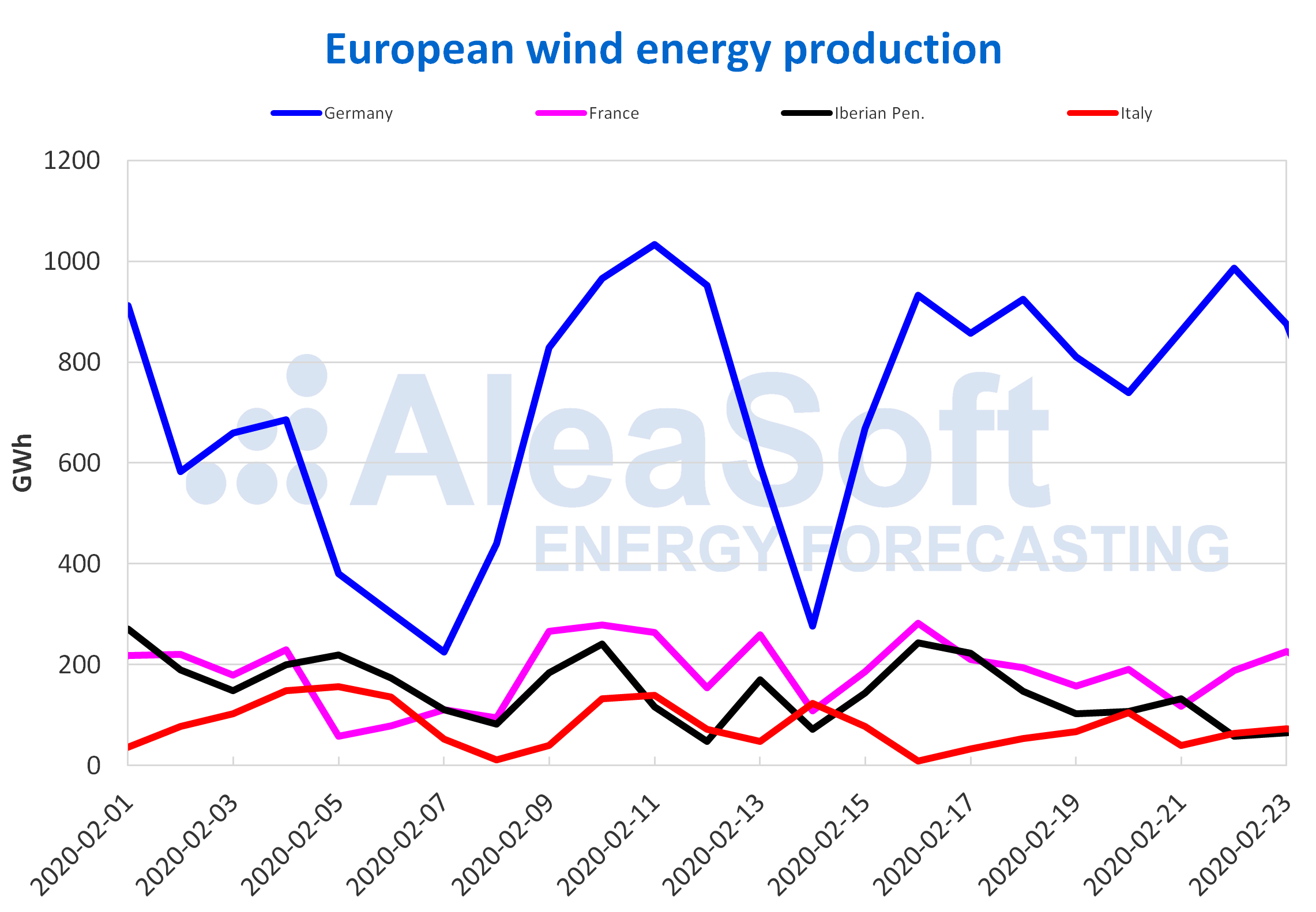 The electricity demand decreased in general during the last week compared to that of February 10. The average temperatures less cold in Germany with a variation of 0.8 °C, in Great Britain of 0.7 °C and in The Netherlands of 0.2 °C, led to declines in demand of 1.0%, 2.7% and 3.3% respectively. Portugal also registered one of the greatest declines, with a variation of ‑2.8%. In Belgium the decrease was 1.1%, while in Spain and France they were 0.6% and 0.7%.

At AleaSoft, the electricity demand is expected to increase in most of Europe’s electricity markets during this week. 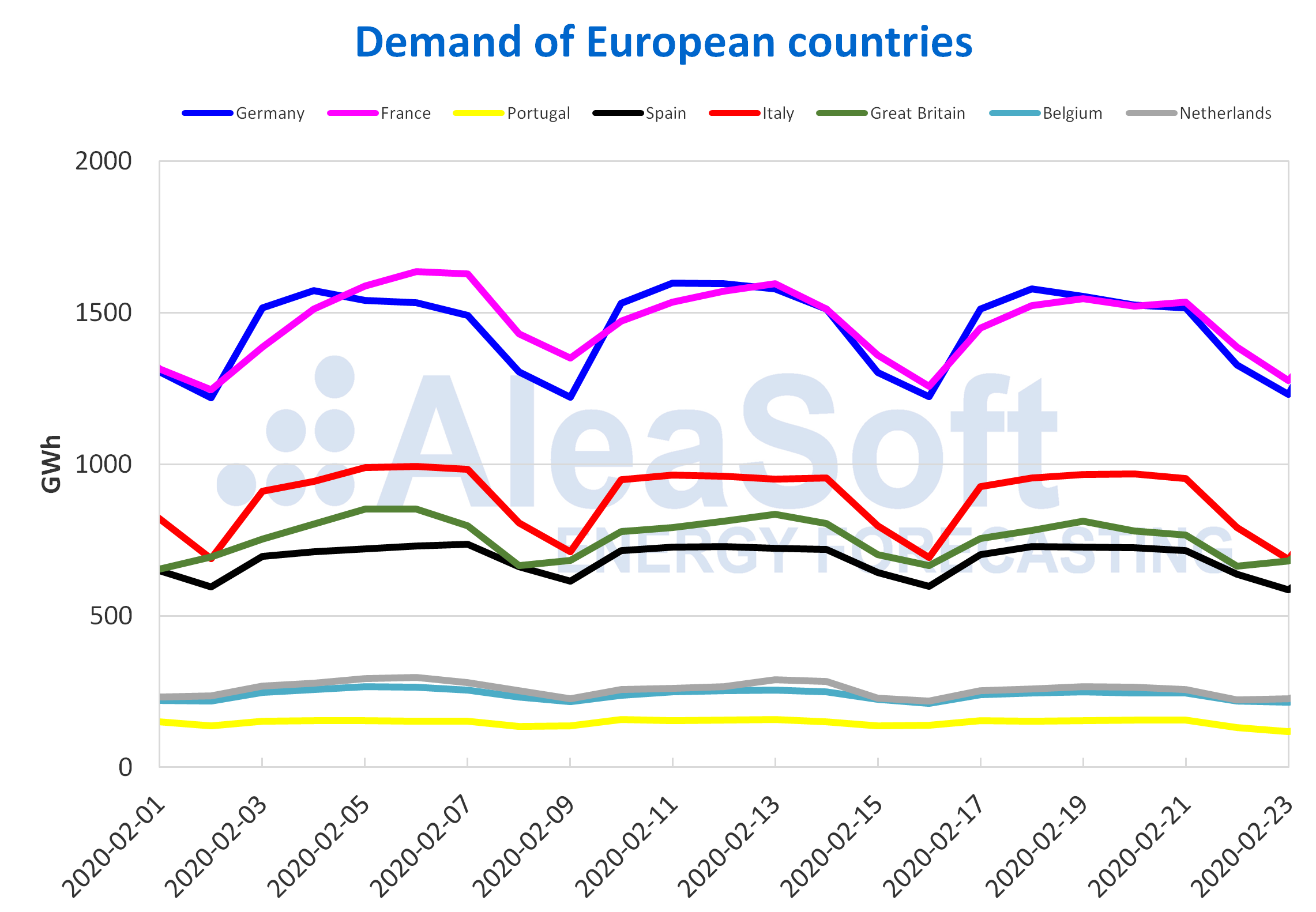 The Federal Network Agency of Germany, the Bundesnetzagentur (BNetzA) announced on Wednesday, February 19, the results of the first renewable capacity auction held on February 1. A total of 523 MW of the 900 auctioned were awarded for 66 wind energy projects, with supply prices in the range of €57.60/MWh ‑ €62.00/MWh and an average of €61.80/MWh.

100.55 MW were awarded for photovoltaic energy projects promoters of the 100 MW in tender. The minimum price of the accepted offers was €35.50/MWh, which is a record in Germany. While the maximum was €52.10/MWh and the average price was €50.10/MWh.

The BNetzA announced that Germany’s next renewable capacity auction will be on March 1.

Last week the prices of most of the European markets analysed at AleaSoft, on average, increased compared to the previous week of February 10. The exception was the Nord Pool market in the Nordic countries, where the price decreased by 21% and the weekly average was below €10/MWh. The EPEX SPOT market of France, whose weekly average price increased by 13% over the previous week, stands out in the increases. The prices of Spain and Portugal in the MIBEL market were the second and third with the greatest variations, of 6.7% and 6.0% respectively. On the other hand, the Italian IPEX market with an increase of 0.8% was the one with the least variation. The rest of the markets presented increases of between 2.2% and 5.1%.

In the week that just ended, the negative prices for several hours of February 22 and 23 in the EPEX SPOT market of Germany stand out again, after those obtained on February 16. During those days, high wind energy production values were combined again with higher temperatures and the low weekend demand. Specifically, the average price for Saturday, February 22, was ‑€1.51/MWh, while for Sunday, February 23, the average price did not exceed €7/MWh. The low prices of these two days averaged a weekly price of €18.50/MWh, the lowest of the EPEX SPOT markets, but it was still 3.8% higher than the average price of the week of February 10.

The N2EX market of Great Britain, the MIBEL market and the IPEX market continue to form the group of markets with the highest price. In the case of the MIBEL and N2EX markets, the average prices for this Monday, February 24, were above €40/MWh, while the Italian market closed with a daily average of €38.30/MWh. On the other hand, the prices of EPEX SPOT markets of Germany, France, Belgium and The Netherlands continue to be in the group of markets with lower prices. In this case, the prices for February 24 settled between €28.17/MWh of the French market and €34.18/MWh of the market of The Netherlands. The Nord Pool market of the Nordic countries continues to be the market with the lowest prices and a price of €10.79/MWh was averaged on February 24. 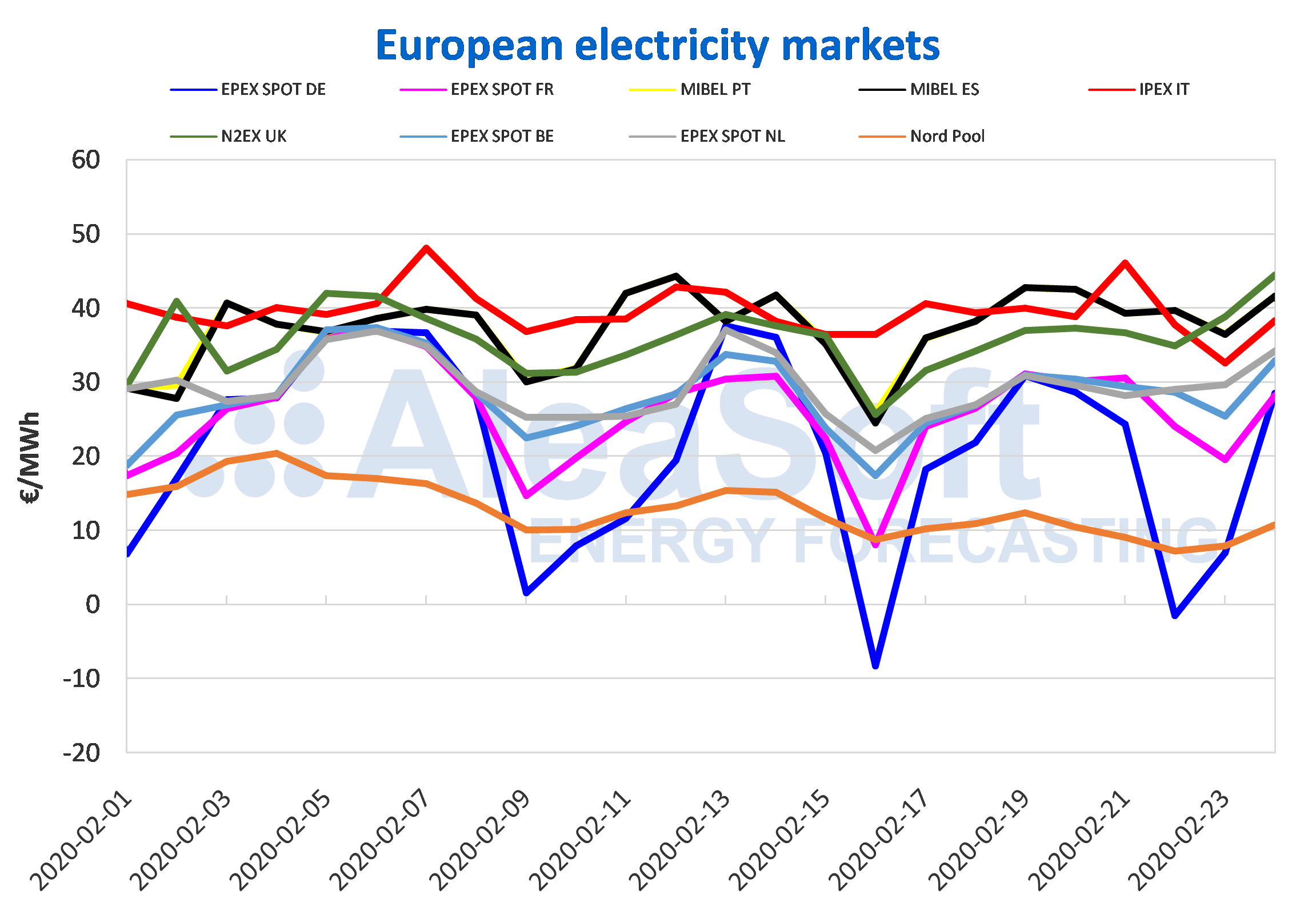 The electricity futures prices for the second quarter of 2020 in the ICE and NASDAQ markets of the Nordic countries, settled on Friday, February 21, with a drop of over 18% compared to the settlement of Friday, February 14. The rest of the European markets registered slight recoveries with variations ranging from 0.1% of Belgium’s ICE market to 2.8% of Great Britain’s ICE market.

In the case of the futures for next year 2021, the decline in prices in the ICE and NASDAQ markets of the Nordic countries, which settled last week 6.4% and 6.5% below the values of the previous Friday, also stands out. The EEX markets of Germany, France and Italy and the ICE markets of The Netherlands and Belgium were also downward with values up to 1.1% lower than those registered on Friday, February 14. On the contrary, the EEX markets of Spain and Great Britain, the OMIP market of Spain and Portugal as well as the ICE market of Great Britain, settled last Friday up to 0.9% higher than the same day of the previous week.

The Brent oil futures prices for the month of April 2020 in the ICE market last week registered an upward trend that lasted until Thursday, February 20. That day the highest settlement price so far this month, of $59.31/bbl, was reached. But on Friday, February 21, the prices fell 1.4% to $58.50/bbl.

This drop in prices is related to the increase in detected cases of coronavirus infection outside of China and the concerns about the effects that the spread of the disease will have on the global economy.

Although it is expected that the decline in production in Libya and, possibly, in Venezuela, plus the production cuts that will be agreed at the OPEC+ meeting scheduled for early March will allow the market to be rebalanced, in the coming days the prices could continue descending.

The TTF gas futures prices in the ICE market for the month of March 2020 the first days of last week rose until reaching a settlement price of €9.57/MWh on Wednesday, February 19, which is the most elevated so far this month. However, as of Thursday they began to decline and on Friday there was a settlement price of €9.41/MWh, which is still 6.0% higher than the Friday of the previous week.

The prices may continue to fall in the coming days due to a decrease in demand associated with weather conditions.

Regarding the prices of TTF gas in the spot market, they also increased during the first days of last week until reaching an index price of €9.65/MWh on Wednesday. From that day until today, they have remained stable around €9.54/MWh, varying between €9.45/MWh of the weekend and €9.69/MWh of Friday, which is the highest registered value so far this month.

As for the CO2 emission rights futures in the EEX market for the reference contract of December 2020, all last week they registered settlement prices above €25/t. An upward trend occurred on the first days of the week and on Wednesday, February 19, the maximum settlement price so far this year was reached with a value of €25.72/t. But on Thursday the prices began to fall until reaching on Friday, February 21, a settlement price of €25.62/t. 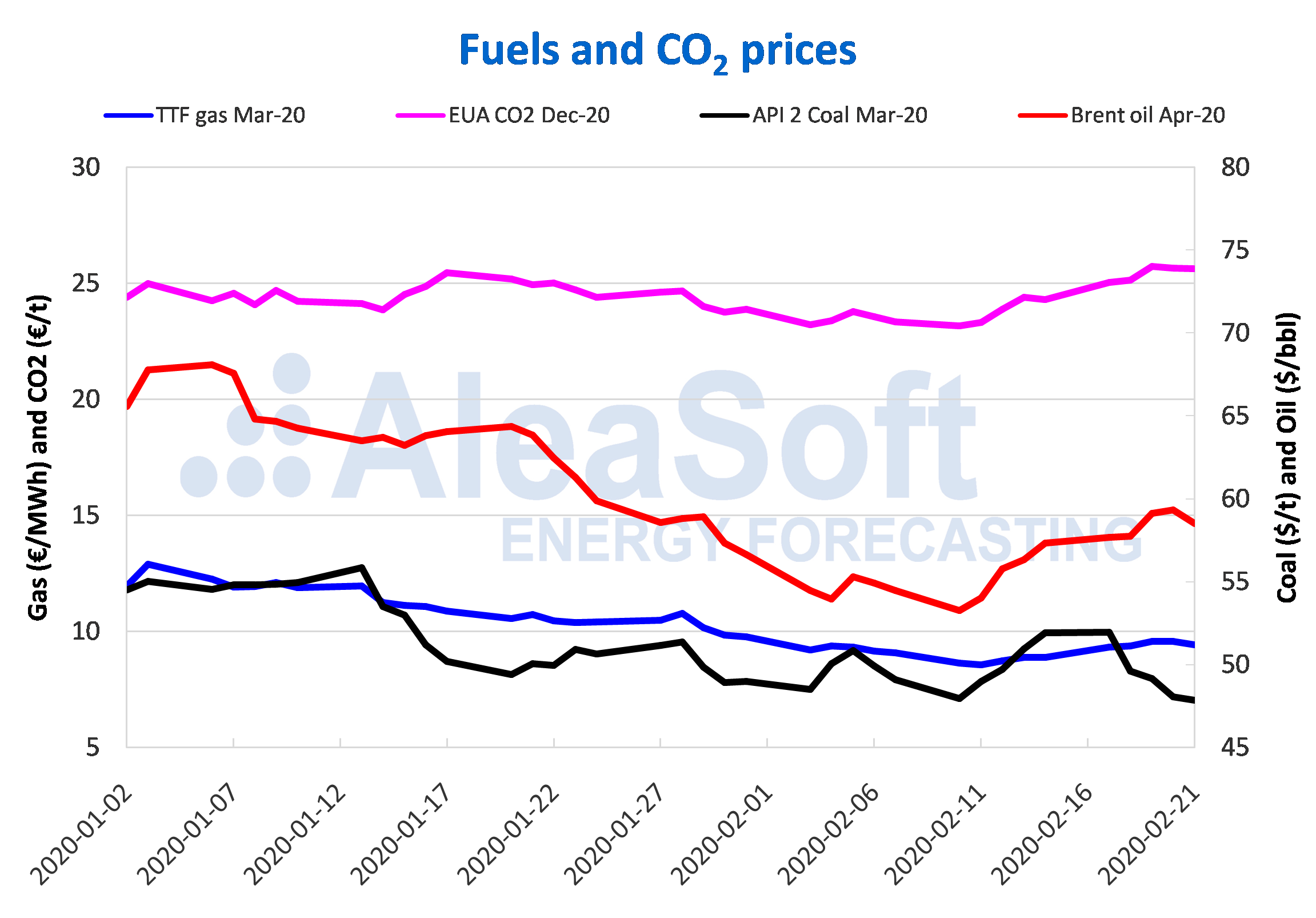