In February the prices of all European electricity markets lowered

AleaSoft, March 3, 2020. At AleaSoft, the analysis of the main European electricity markets in February was carried out. In this period, the prices fell both compared to January and on a year‑on‑year comparison due to lower electricity demand and the decrease in prices of the fuels used in electricity generation, mainly gas and coal. The solar and wind energy production grew in most of the continent, reaching record values in some markets.

The month of February 2020 had a year‑on‑year rebound in some European markets in terms of solar energy production, while in others there were falls. The most notable happened in the Spanish market, where the record of instant photovoltaic generation was beaten several times. It was in this same market where the solar energy production surpassed the nuclear energy production for the first time in the history. If the average production of the month is analysed, the percentage increases with respect to February 2019 in the Iberian Peninsula and Italy were 29% and 3.6% respectively. As a counterpart, there were declines of 27% and 11% in the markets of France and Germany respectively.

In the comparison with respect to the first month of 2020, the increases in average production were significant in this month of February. The increases were led by those of the Iberian Peninsula and Germany, which were 77% and 63% respectively. The rest of the markets had increases of between 47% and 59%. 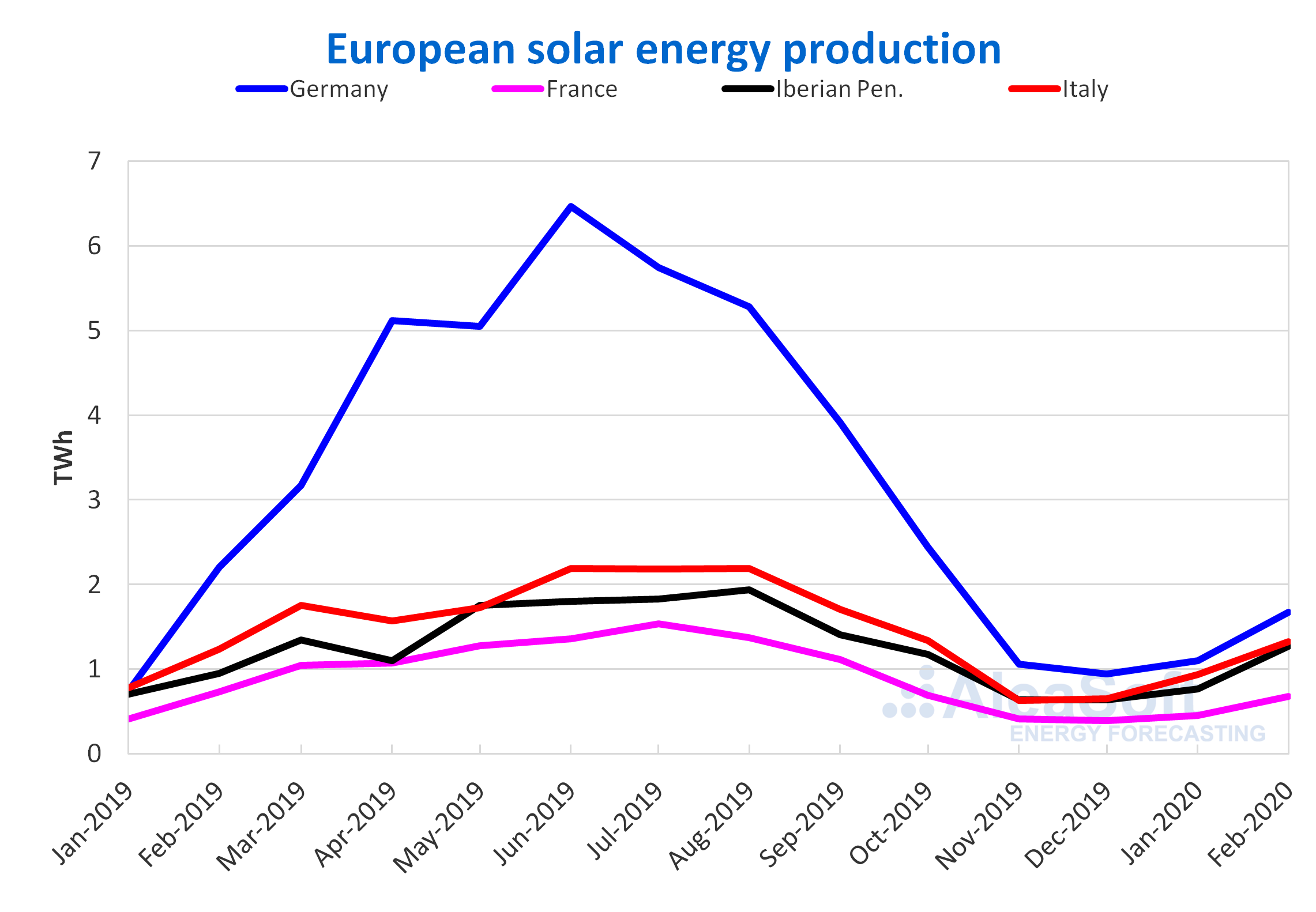 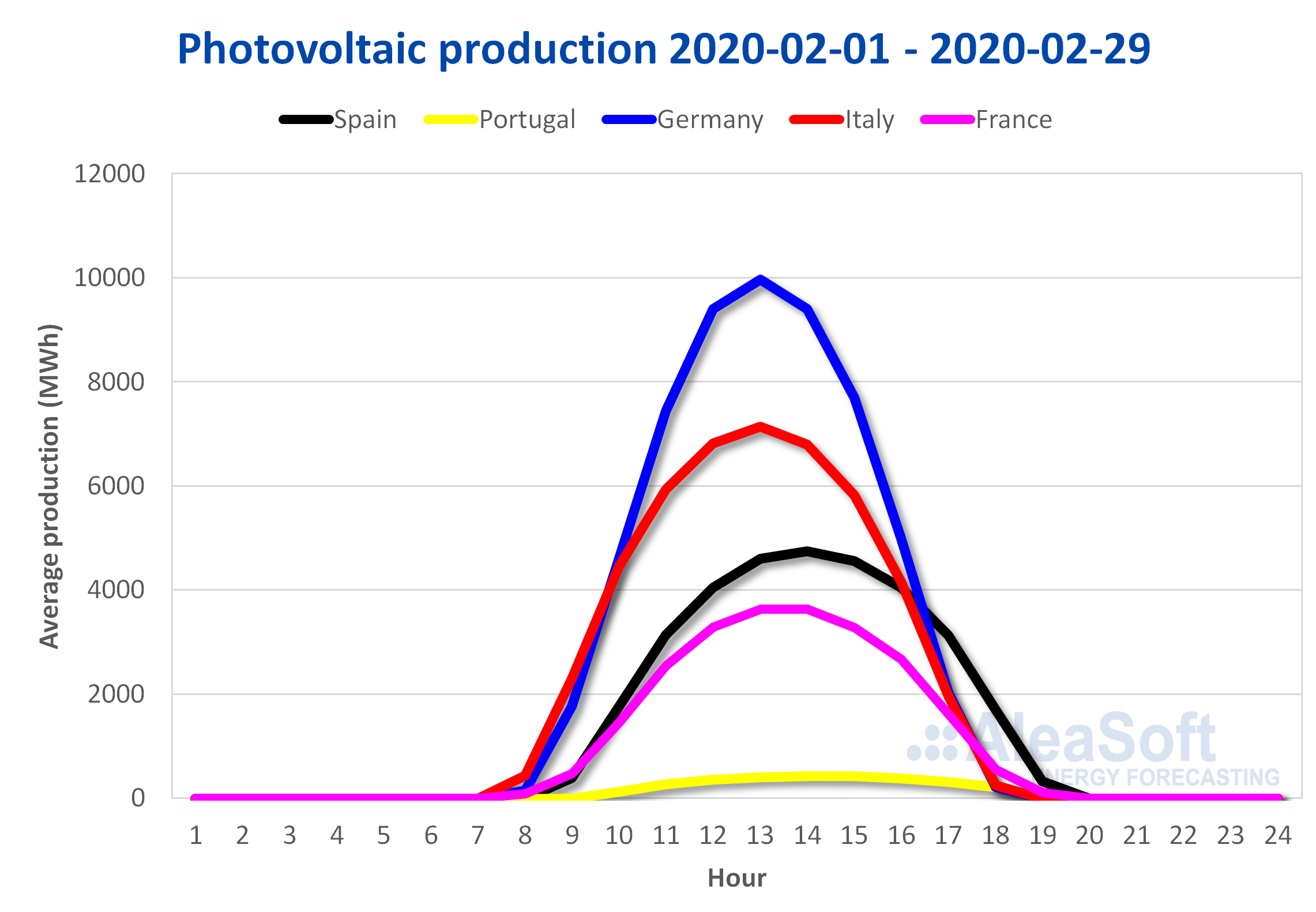 As regards the wind energy production, there were year‑on‑year increases in most European markets. The generation of the German market was the most outstanding during February, marking a historical record of monthly production of 20.8 TWh. The year‑on‑year increases in average production that stand out were those of France with 118% and Germany with 85%. In the Iberian Peninsula and Italy there were more discrete increases of 6.4% and 0.2% respectively. On the other hand, in Portugal there was a decrease of 14%.

During February there were both increases and decreases in average wind energy production compared to January 2020. The increases were in the markets of Germany, Italy and France, whose values were 36%, 51% and 52% respectively. On the other hand, the Iberian Peninsula registered a 10% decrease. 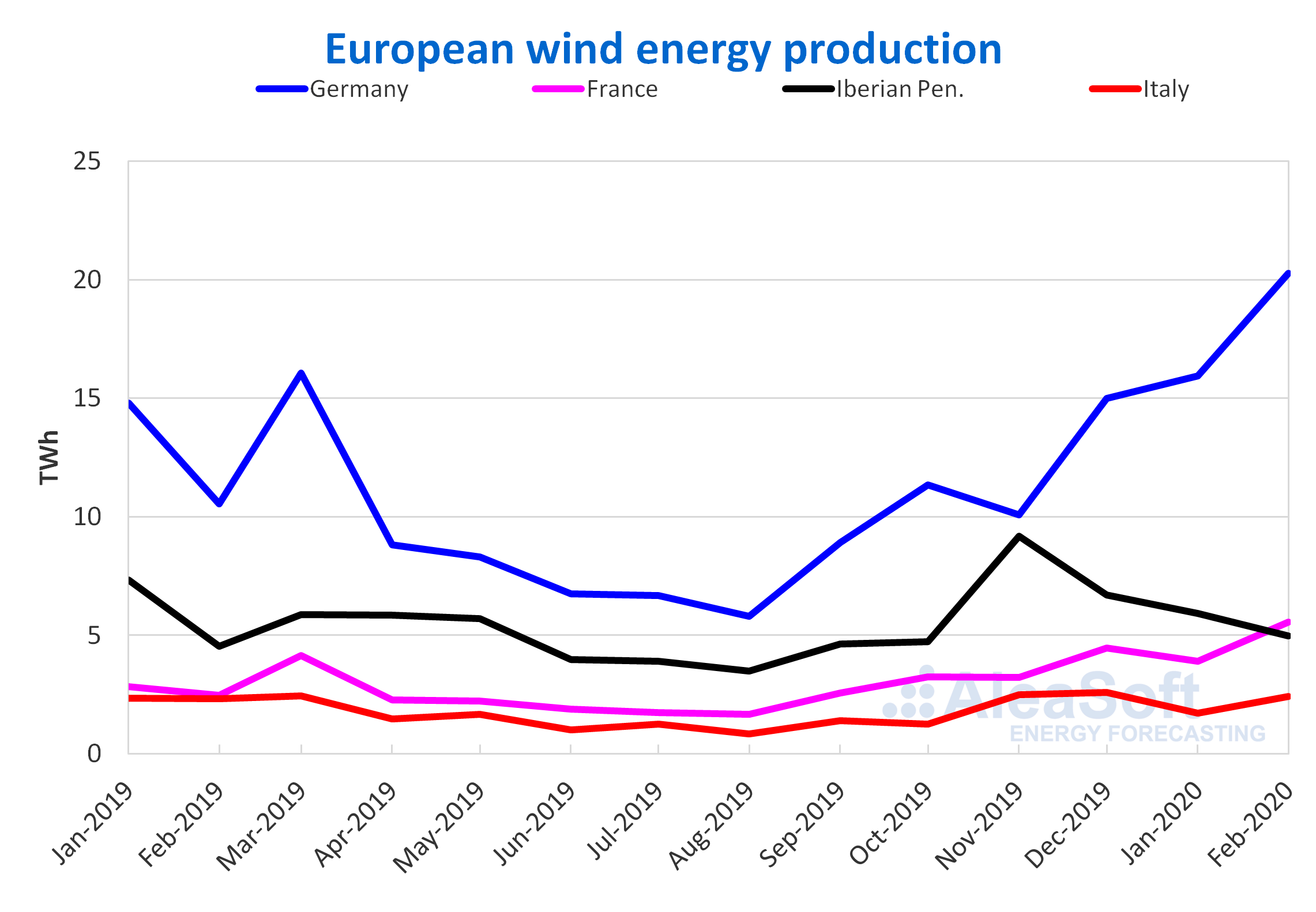 The electricity demand declined widely across the continent in year‑on‑year terms as a result of less cold average temperatures. The largest declines in average demand were between 3.0% and 5.2% for the markets of France, Portugal, Spain, Great Britain and Belgium. The markets of Italy and Germany were those with the lowest declines, with 2.5% and 0.7% respectively.

When making the comparison with respect to the first month of this year, in February the average electricity demand also fell in most markets. The markets of Portugal, France and Spain were those with the greatest decrease, of 9.8%, 6.7% and 6.1% respectively. In Great Britain and Belgium there were falls close to 2.7%, while in Germany and Italy the increases were 1.2% and 1.4%. 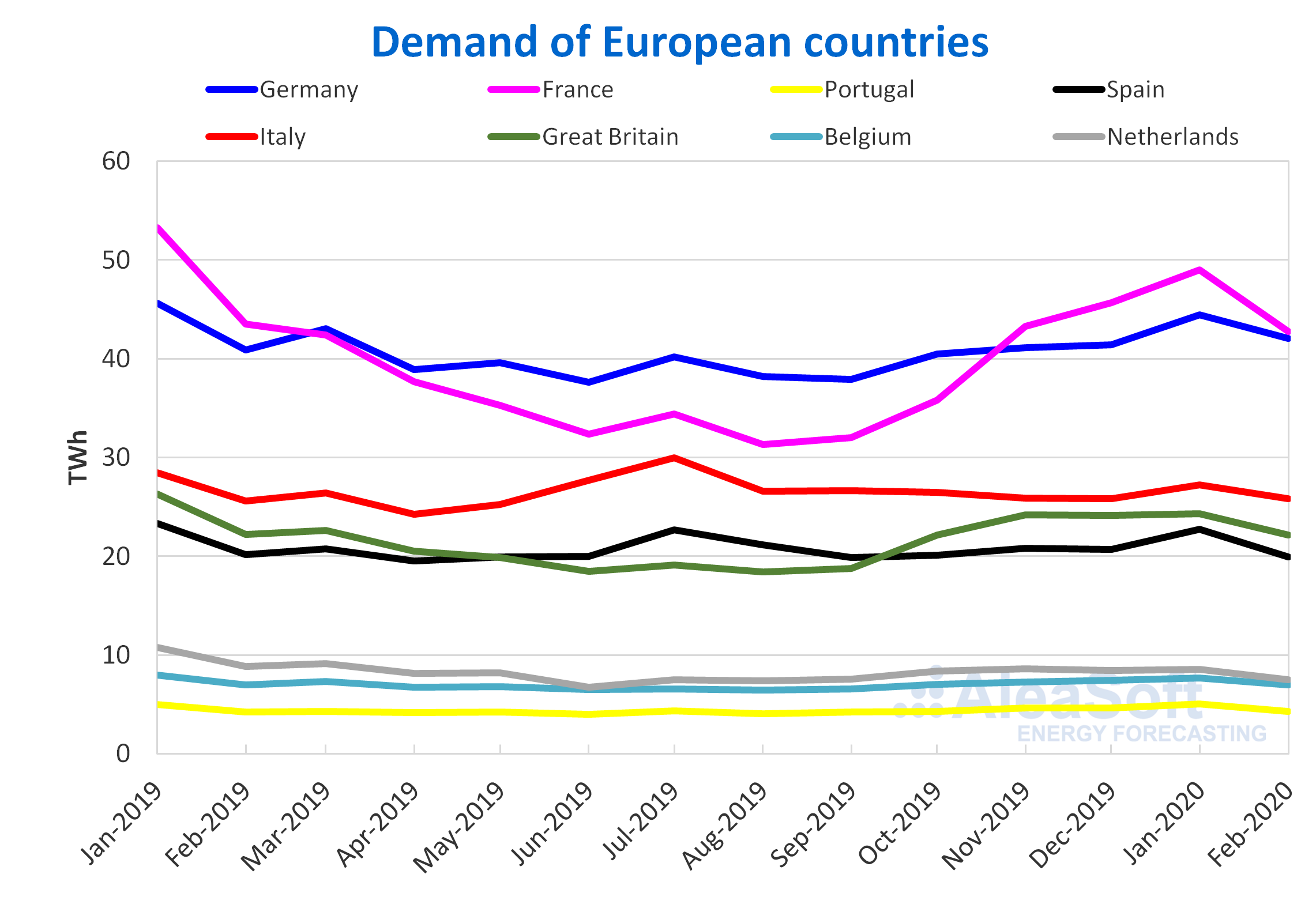 The average wind energy production rose 11% in year‑on‑year terms, but it decreased 2.1% compared to last January.

In year‑on‑year terms, the average hydroelectric energy production increased by 13% in the just concluded month. But for the second consecutive month it fell compared to the previous month, this time 17%.

The hydroelectric reserves increased by 16% compared to February 2019. However, compared to January 2020, they decreased by 2.2%. 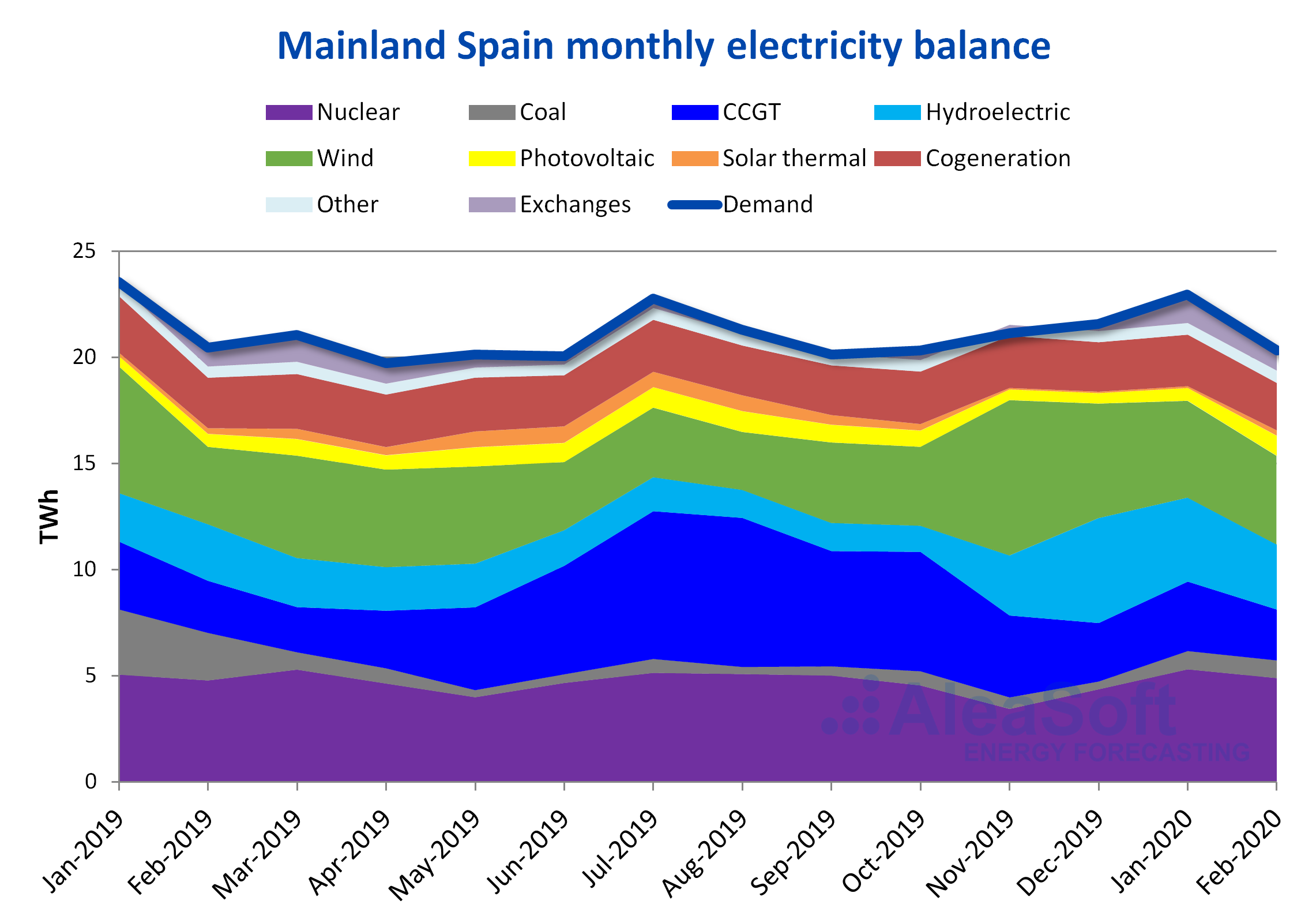 The production with combined cycle gas turbines in February was 2397 GWh. When analysing the average production, this was 5.7% lower than that of the same month of 2019, and 22% lower compared to January of this year.

During the past month all nuclear power plants were underway. The average nuclear energy production varied 1.2% with respect to the same month of the previous year and 1.4% with respect to January of this year.

The average electricity demand fell 5.6% compared to January, mainly due to average temperatures that were 1.9 °C higher. The total demand was 19 925 GWh, which was 45% covered by renewable energy.

During the recently finished month of February, all the analysed European electricity markets showed decreases in the monthly average price compared to the previous month. The MIBEL market of Spain and Portugal, the N2EX market of Great Britain and the IPEX market of Italy, which make up the group of markets with the highest prices, were those with the lowest drop, with variations between ‑12% and ‑17%. The Italian market, despite presenting the greatest variation of this group, was the market with the highest price last month. On the other hand, in the group of markets with the lowest prices, formed by the EPEX SPOT market of Germany, France, Belgium and the Netherlands and the Nord Pool market of the Nordic countries, the prices fell between 20% and a 46%. The Nord Pool market positioned itself, as it was doing since the beginning of the year, as the one with the lowest price and the greatest variation compared to the previous month.

In the same way, in the year‑on‑year analysis, the monthly price of February 2020 was markedly lower than that of 2019 in all the markets of the European continent, where in the vast majority they fell close to €20/MWh. In the group of markets with the highest prices, the Italian market with a variation of ‑32% was the one with the lowest decrease, followed by the Iberian and the British markets, with decreases of between 34% and 37%. In the EPEX SPOT market, Germany was the one with the greatest decrease, close to 50%, while the rest of the countries of this market had declines of between 37% and 44%. Likewise, the Nord Pool market was the one that registered the greatest decline, ending the month of February 2020 with an average price that was 71% lower than the average price for the same month of 2018. 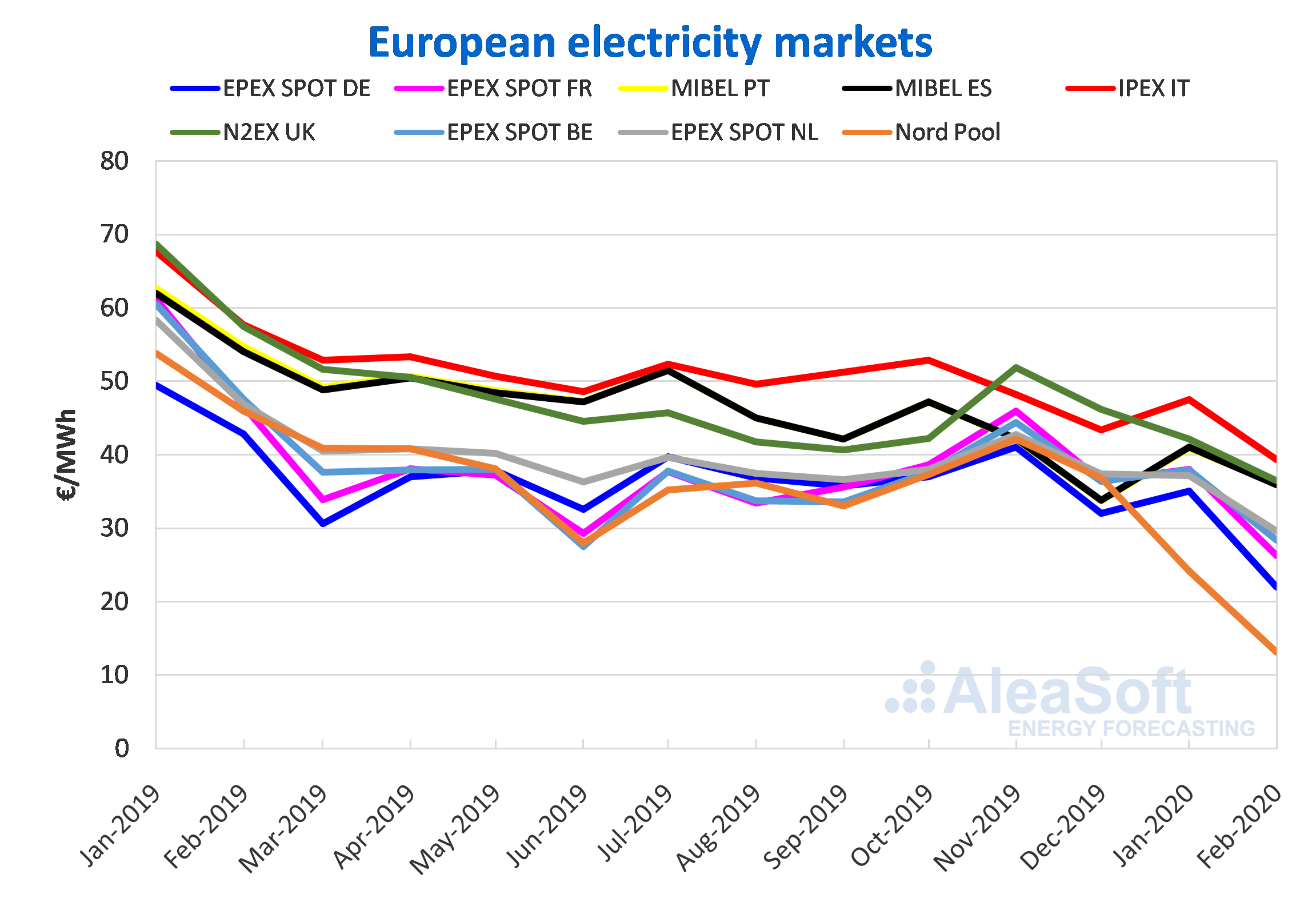 Among the causes of this decline, both in a year‑on‑year and monthly comparison, is the behaviour of the prices of fuels used for power generation, which during this February reached historical lows on several occasions. The decrease in fuel prices was coupled with a lower electricity demand in most markets due to less cold temperatures compared to the previous month and the equivalent month of 2019.

In February, the prices of the MIBEL market of Spain and Portugal settled €5.10/MWh and €4.80/MWh below those of the previous month respectively, with a convergence in hourly prices for both countries of 96%, compared to 94% of January 2020 and 84% of February 2019. With a decrease of 12% for both countries compared to the previous month, the average prices of February, both for Spain and Portugal, are the second lowest since May 2016, behind those reached in December 2019. In year‑on‑year terms, the prices for both markets in the month of February were down 34%, being around €20/MWh lower than those of February 2019.

The month of February in the electricity futures markets was marked by a downward trend for the product of the second quarter of 2020. The behaviour was not strictly downward, in most markets the prices had a rise during the first fortnight of February and, after a few days of stability, around February 18 they began a fall that ended up leaving a negative balance compared to the previous month. The ICE market and the NASDAQ market of the Nordic countries were a special case during the month of February. The price of Q2‑2020 in the Nordic region reached values very close to €10/MWh and ended up closing the month with less than half the price with which it closed the month of January. This drop was due to a very wet and mild weather forecast than usual for those dates, which would favour the hydroelectric energy production, which is the main renewable source in the region, as well as a reduction in demand due to the less cold temperatures. In the rest of the markets, the net balance for the month of February stood at decreases of between 13% and 19%.

Regarding the futures for the product of the 2021 calendar year, the behaviour was very similar, although with a smaller amount. In this case, not all markets showed a decline in February compared to the previous month. Great Britain, both in the EEX market and in the ICE market registered a rise during the month of 2.0% and 1.7% respectively. In the rest of the markets, the declines were between 0.9% and 3.5%.

In the past month of February, the decline in demand and the concern about the effects of the expansion of the coronavirus on the world economy influenced the evolution of the Brent oil futures prices. Although the purchases made by the Chinese refineries taking advantage of the low prices at the beginning of the month, the decrease in new cases of coronavirus in China and the decline in production in Libya allowed the increases registered in mid‑February. But the rise in the emergence of new cases outside China led to further price declines.

The coronavirus expansion is expected to continue exerting its downward influence on prices in the month of March. Although the possible agreements on new production cuts that might be reached at the OPEC+ meeting could stabilise the prices.

These low prices were caused by the decrease in demand in Asia associated with the outbreak of coronavirus, which increased the already high levels of supply in Europe, and weather conditions that affected the demand. Although some unforeseen supply interruptions caused the price increase that allowed reaching the monthly maximum price.

The TTF gas prices in the spot market during the month of February continued with the downward trend that began at the end of November 2019, until reaching an index price of €8.81/MWh on February 11, the lowest registered since the first half of October 2019. Then the prices recovered until reaching the monthly maximum price of €9.69/MWh on February 21. The last days of the month continued the declines, ending February with an index price of €8.95/MWh. The average price for this month of February was €9.26/MWh, 17% lower than that of the month of January 2020, of €11.22/MWh, and 49% lower than that of February 2019, of €18.15/MWh.

The API 2 coal futures prices in the ICE market for the month of March 2020 reached their monthly maximum settlement price of $51.95/t on February 17. Subsequently, they went down continuously until the end of the month, registering the monthly minimum value of $46.65/t on February 28, which is also the lowest value of the last two years. The monthly average price was $48.99/t.

The CO2 emission rights futures prices in the EEX market for the December 2020 reference contract began the month of February with a value of €23.22/t and reached the monthly minimum value of €23.16/t on February 10. The prices increased until reaching the monthly maximum settlement price of €25.72/t on February 19. Subsequently, they fell again to €23.61/t of February 28. The average price in February was €24.18/t, 1.3% lower than that of the month of January, of €24.50/t. 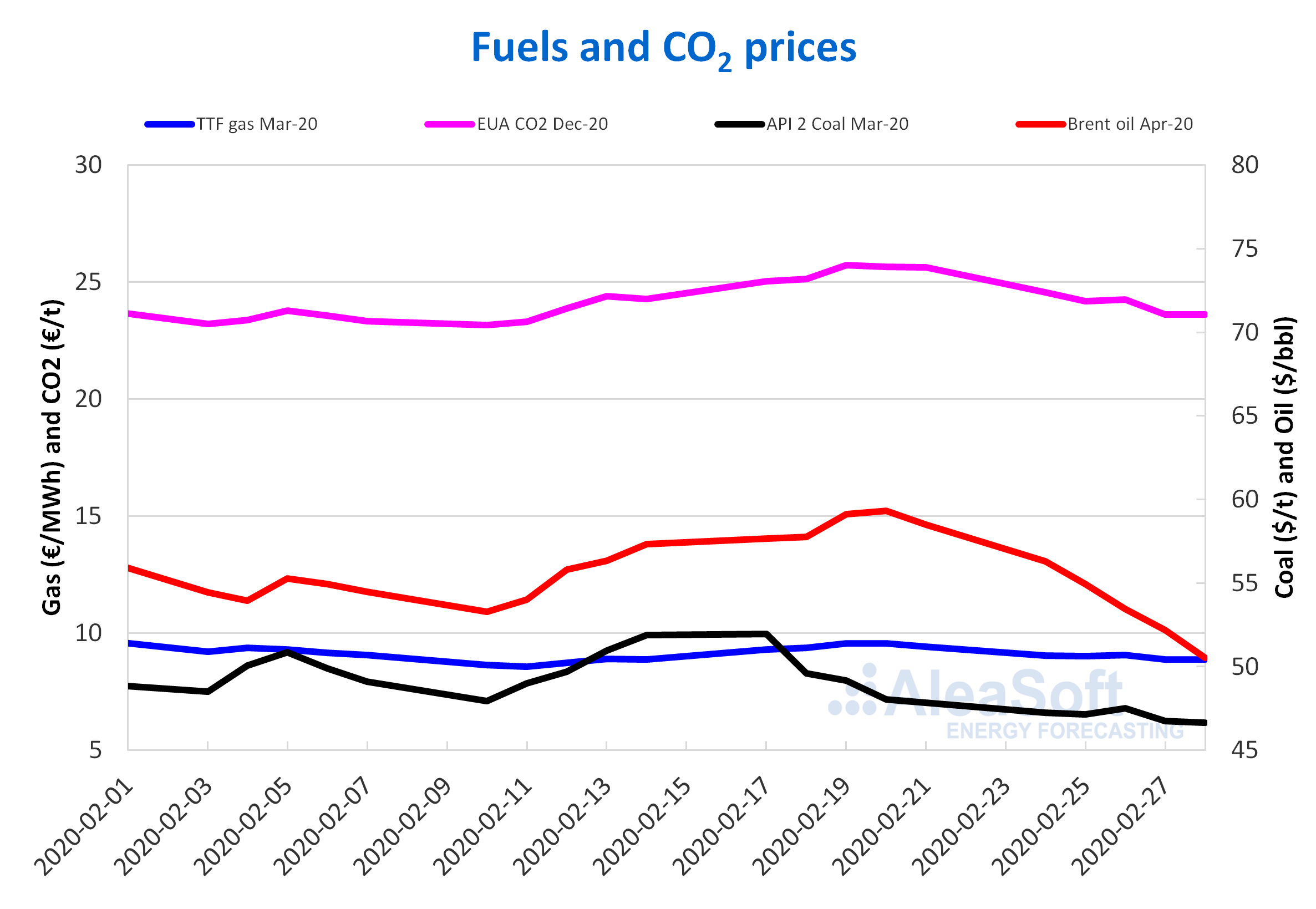