AleaSoft Energy Forecasting, February 21, 2022. In the week of February 14, European electricity markets prices fell, something that happened for the third consecutive week, and they were below €200/MWh. Some markets registered hourly or daily values that are among the lowest of the year. Electricity futures prices also fell mostly. The decreases were favoured by the decrease in demand and gas and CO2 prices, as well as by greater renewable energy production, especially wind energy.

During the week of February 14, the solar energy production increased in the Iberian market compared to the week that preceded it. In the Portuguese market, the production with this technology increased by 26%, while in the Spanish market the increase was 14%. On the contrary, in the rest of the markets analysed at AleaSoft Energy Forecasting, the electricity generation with solar energy decreased. The French market was the one with the largest variation, with a decrease in production of 29%, followed by the markets of Italy and Germany with decreases of 25% and 22% respectively.

For the last week of February, the AleaSoft Energy Forecasting’s forecasts indicate that the solar energy production will recover in the German and Italian markets, while a decline is expected in the Spanish market. 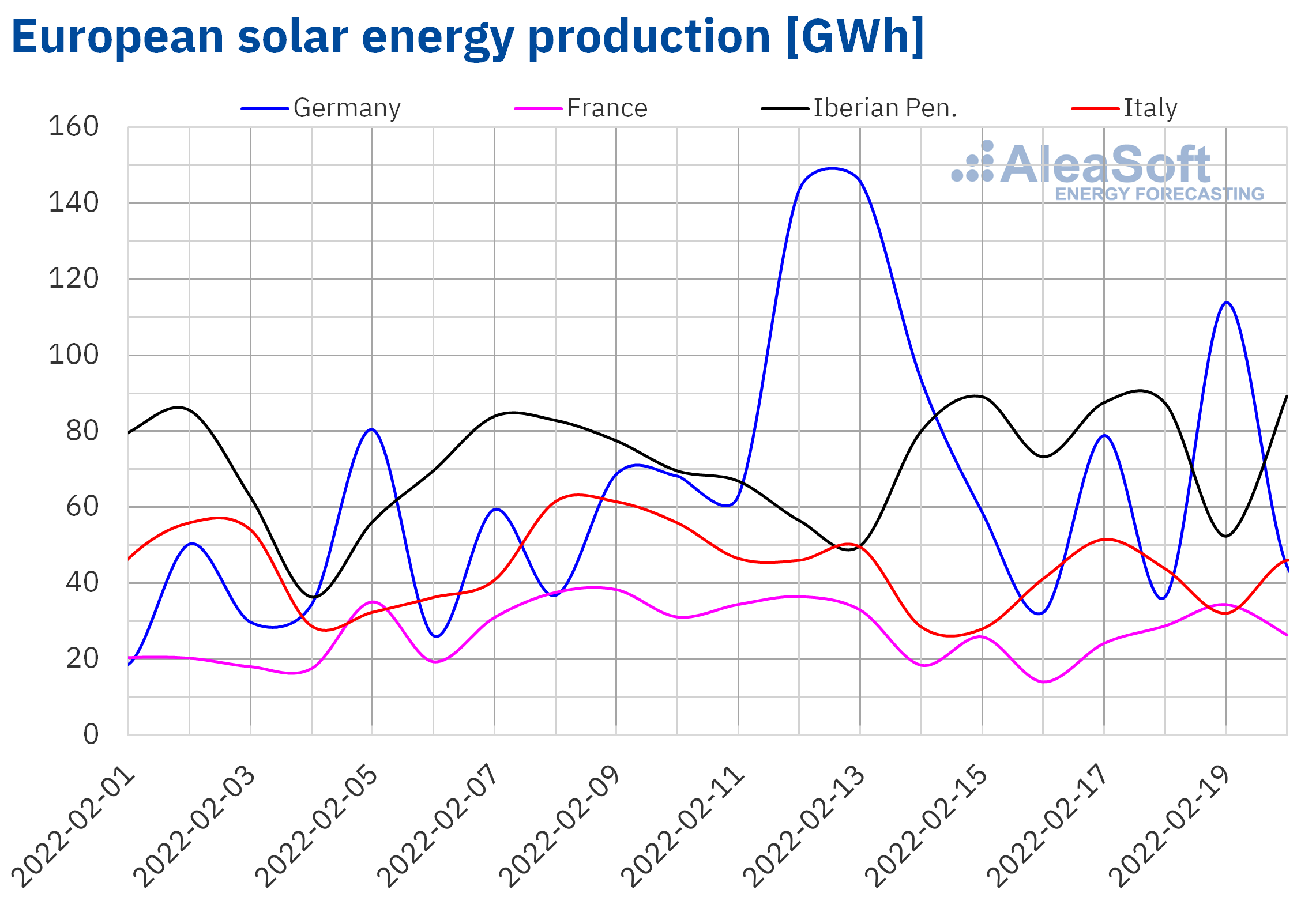 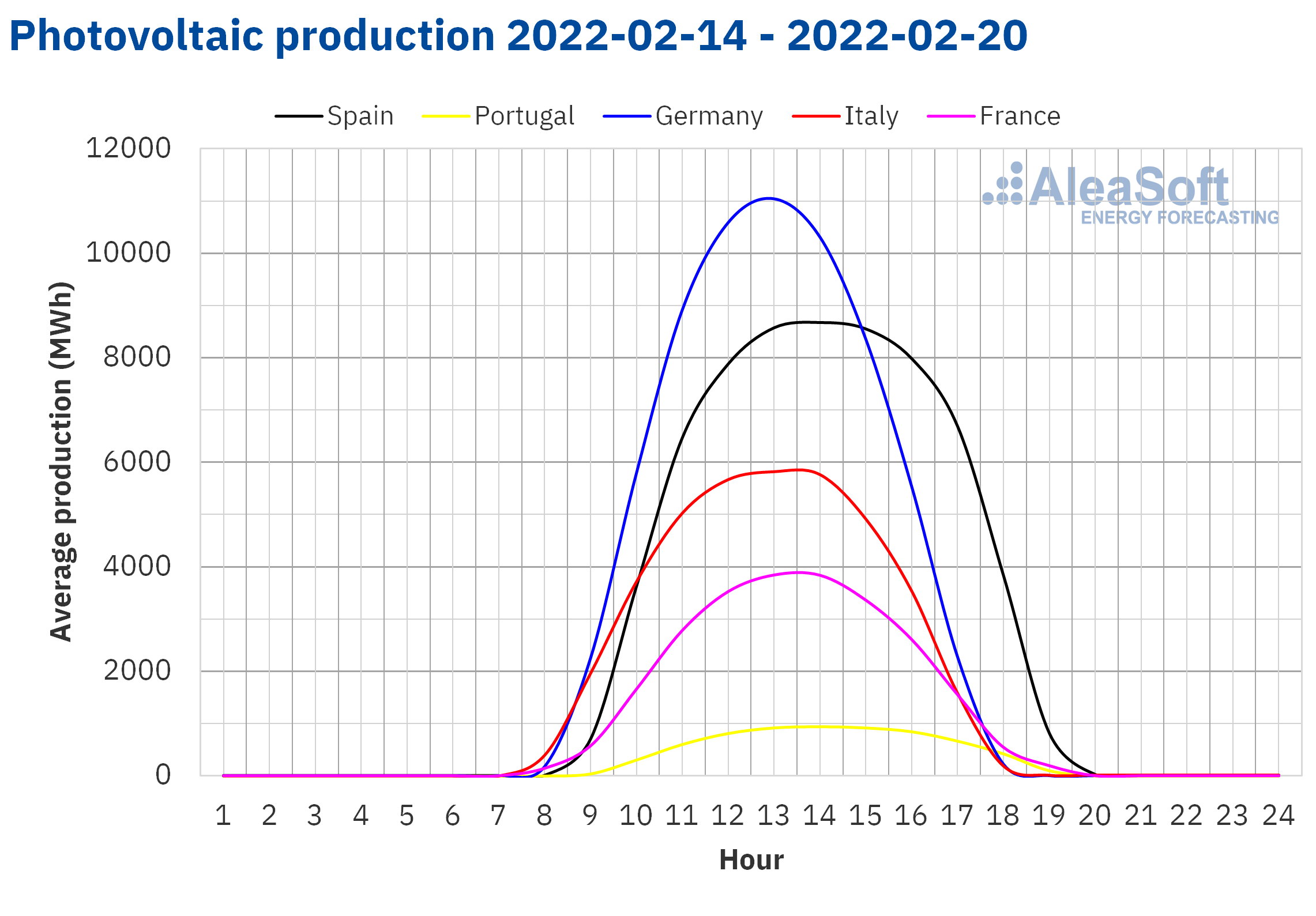 The wind energy production increased in a generalised way in the markets analysed at AleaSoft Energy Forecasting in the third week of February, compared to the production of the week of February 7. The largest variation occurred in the French market, with an increase of 133%, and where on Wednesday, February 16, a daily production historical record of 325 GWh was registered. The Iberian market was the second market with the largest variation in wind energy production during the week, with an increase of 60%. In the markets of Germany and Italy, the rise in production with this technology was 41% and 15% in each case.

For the week of February 21, the AleaSoft Energy Forecasting’s forecasts indicate a decline in wind energy production of most analysed markets compared to the third week of February, although for the Italian market it is expected to continue increasing. 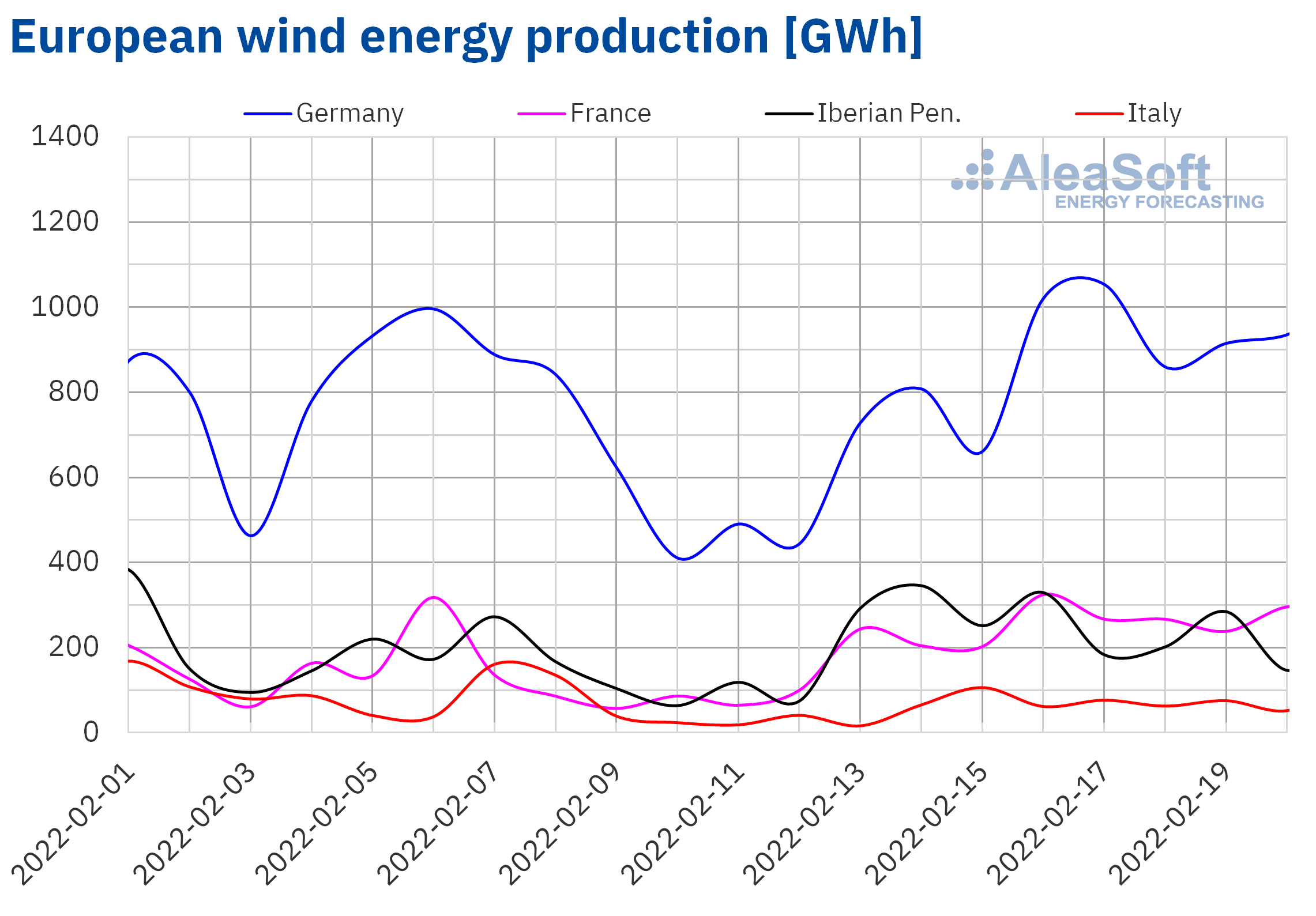 The electricity demand decreased in most European electricity markets in the week of February 14 compared to the previous week. The weekly increase in average temperatures in European markets favoured these falls. The most notable drop was 6.2% in France, falling for the fifth consecutive week since the second week of January. In the market of the Netherlands, which has the same downward trend as the French market, the decrease was 3.2%. In the case of the market of Great Britain, the drop was 2.8%. In the Belgian, Spanish and Italian markets the decreases were equal to or less than 1.5%.

For the week of February 21, the AleaSoft Energy Forecasting’s demand forecasting indicates that recoveries will be registered in most European markets except in the Italian market where the demand is expected to drop. 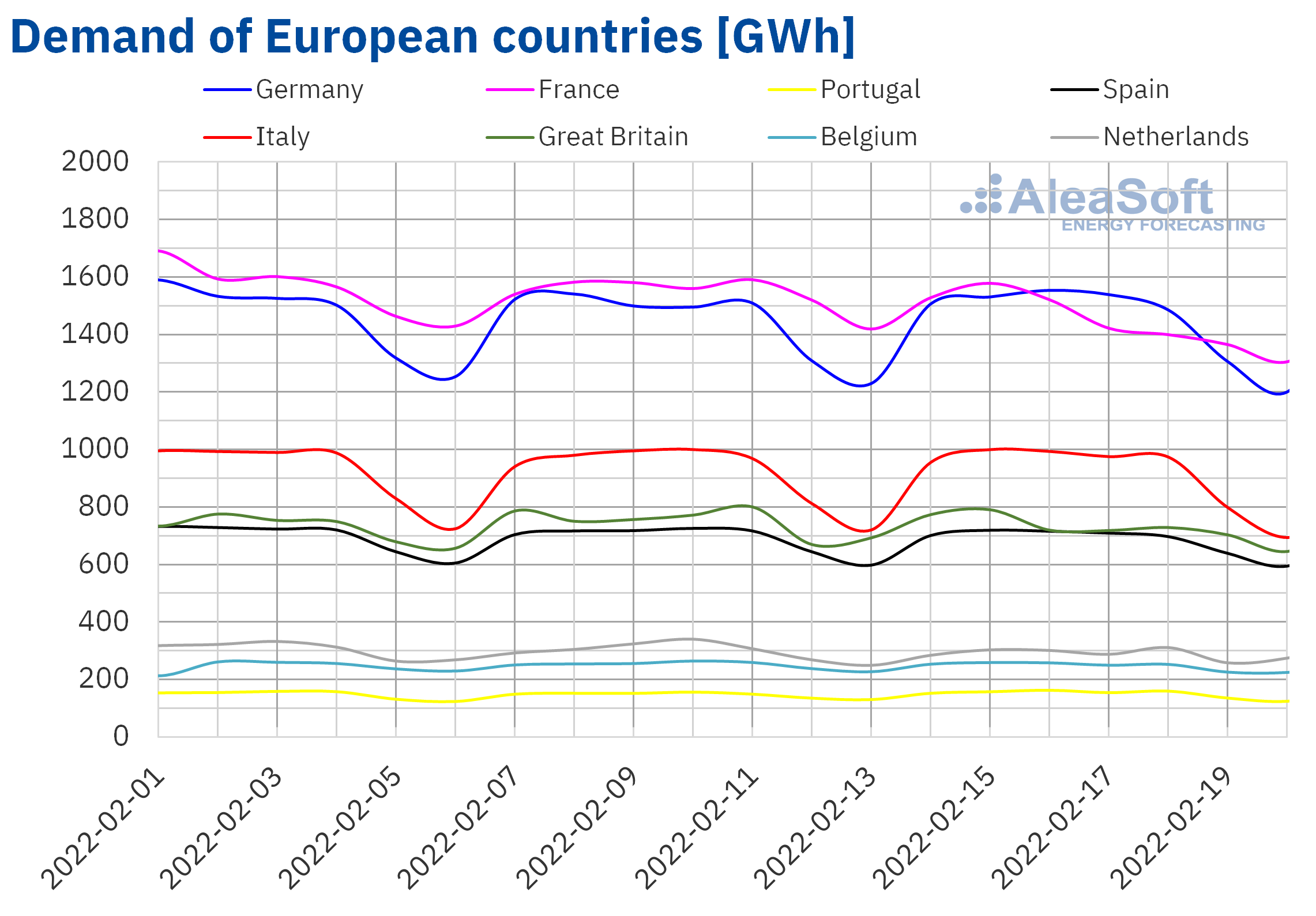 In the third week of February, average prices remained below €200/MWh in all analysed electricity markets. The highest average was that of the Italian market, which reached a value of €198.18/MWh. In contrast, the lowest weekly average price, of €80.46/MWh, was that of the Nord Pool market. In the rest of the markets, prices were between €95.40/MWh of the German market and €174.22/MWh of the N2EX market of the United Kingdom.

Between February 14 and 20, the lowest daily prices since the first half of January were registered in the British, French, Spanish, Italian, Dutch and Portuguese markets. In the case of the German market, on Saturday, February 19, the lowest price of this year, of €39.62/MWh, was reached.

During the week of February 14, the notable increase in wind energy production, as well as the decrease in gas and CO2 emission rights prices, favoured the price decreases in the European electricity markets. In addition, the demand fell in most markets. In the case of the MIBEL market of Spain and Portugal, the increase in solar energy production also contributed to the drop in prices. 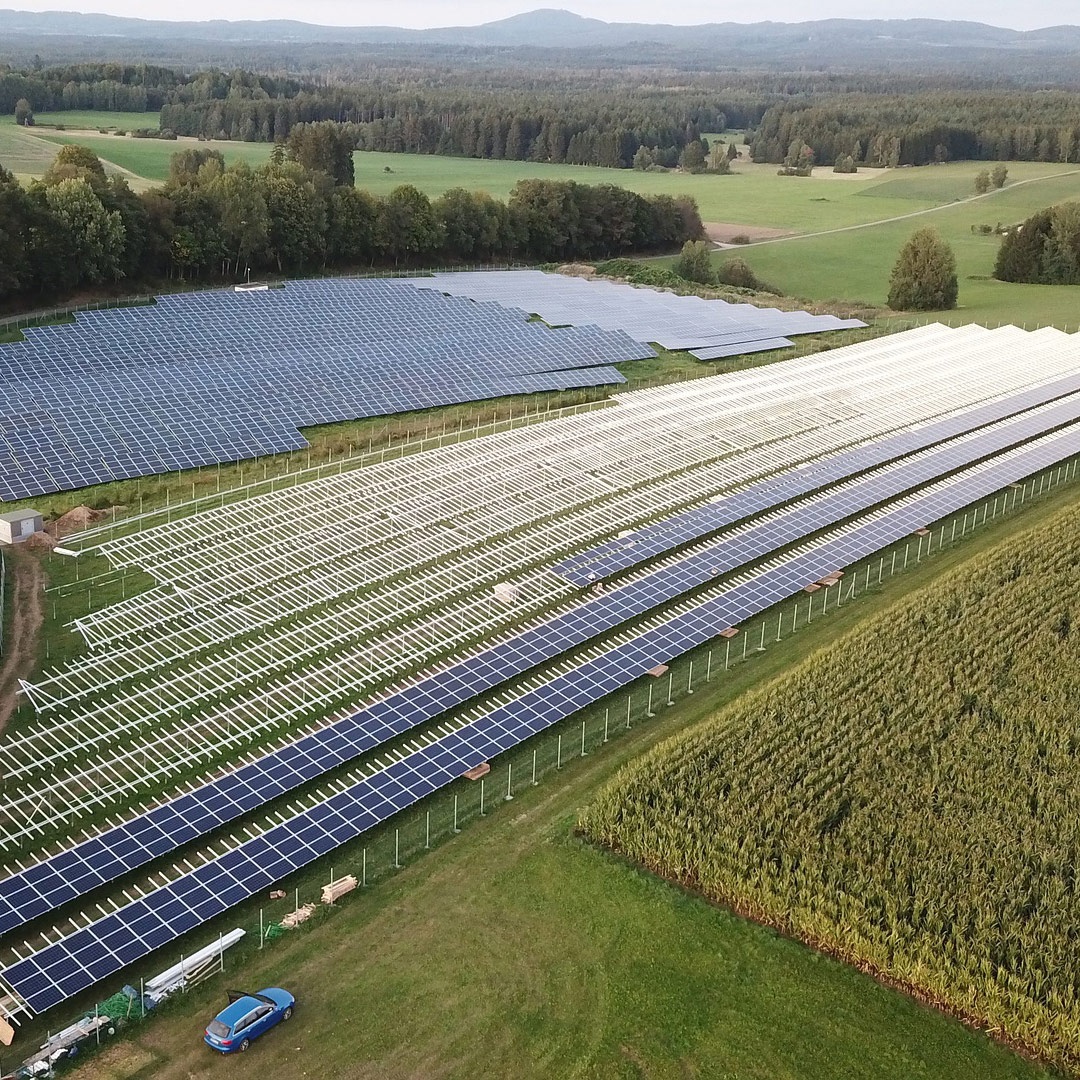 The AleaSoft Energy Forecasting’s forecasts indicate that in the week of February 21, prices might recover in most European electricity markets, favoured by the decrease in wind energy production and the recovery in demand. However, in the Italian market, where solar and wind energy production are expected to increase, prices might continue to decline. 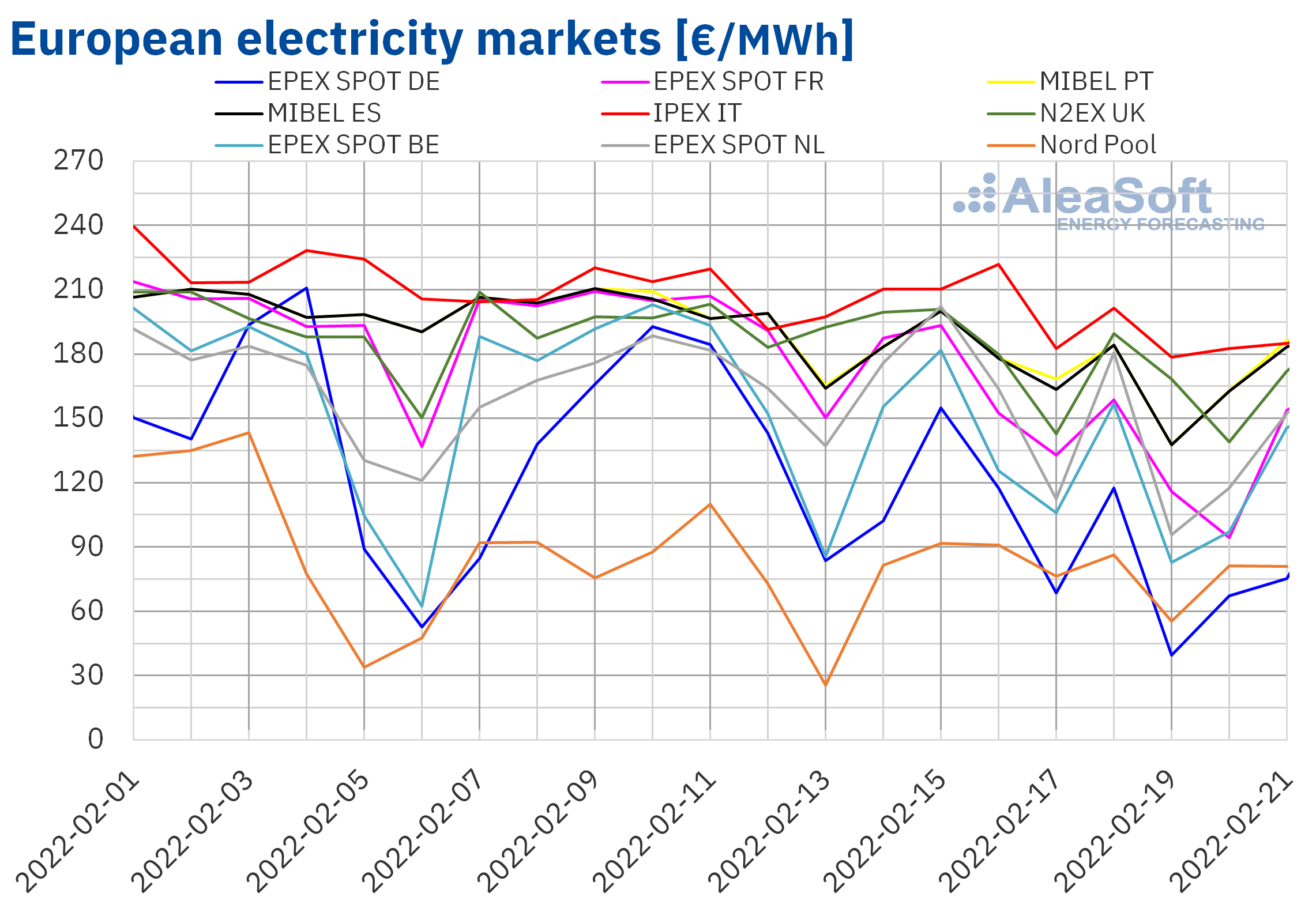 On Friday, February 18, the settlement prices of electricity futures for the next quarter registered decreases in most European markets analysed at AleaSoft Energy Forecasting, compared to the settlement prices of the session on Friday, February 11. The price decreases were between 0.4% in the ICE market of the Netherlands and 4.0% of the ICE market of Belgium. The exceptions were the NASDAQ and ICE markets of the Nordic countries, which registered increases of 6.4% and 6.2% respectively.

In the settlement prices of the futures for the year 2023, the behaviour was similar to that of the electricity futures for the next quarter, the fall of 4.2% in the ICE market of Belgium standing out. For the rest of the markets, the price decreases of Friday, February 18, compared to Friday, February 11, were between 0.8% and 3.4%, except for the NASDAQ and ICE markets of the Nordic countries in which the prices of this product increased by 1.1% and 1.2% respectively.

Brent oil futures prices for the Front‑Month in the ICE market remained above $90/bbl during the third week of February. The weekly maximum settlement price, of $96.48/bbl, was reached on Monday, February 14. This price was 4.1% higher than that of the previous Monday and the highest since September 29, 2014. The rest of the week, settlement prices ranged between $92.97/bbl of Thursday and $94.81/bbl of Wednesday.

Fears of interruptions in supply related to a possible worsening of relations between Russia and Ukraine favoured the rise in prices until they reached the record of Monday, February 14. The behaviour of prices of these futures during the third week of February was highly influenced by the news about this conflict.

As for the TTF gas futures prices in the ICE market for the Front‑Month, on Monday, February 14, they reached a settlement price of €80.77/MWh, influenced by the evolution of tensions between Russia and Ukraine. However, on Tuesday prices fell by 12%. On Wednesday they also fell and the minimum settlement price of the week, of €69.79/MWh, was registered. This price was 6.2% lower than that of the same day of the previous week and the lowest since the beginning of November 2021. Although prices recovered 7.3% on Thursday, they fell again on Friday, registering a settlement price of €73.76/MWh, which was still 4.7% lower than that of the previous Friday.

Regarding CO2 emission rights futures prices in the EEX market for the reference contract of December 2022, during the third week of February they fell to register a settlement price of €86.44/t on Thursday, February 17. This price was 4.8% lower than that of the previous Thursday. However, on Friday the settlement price increased to €89.48/t. 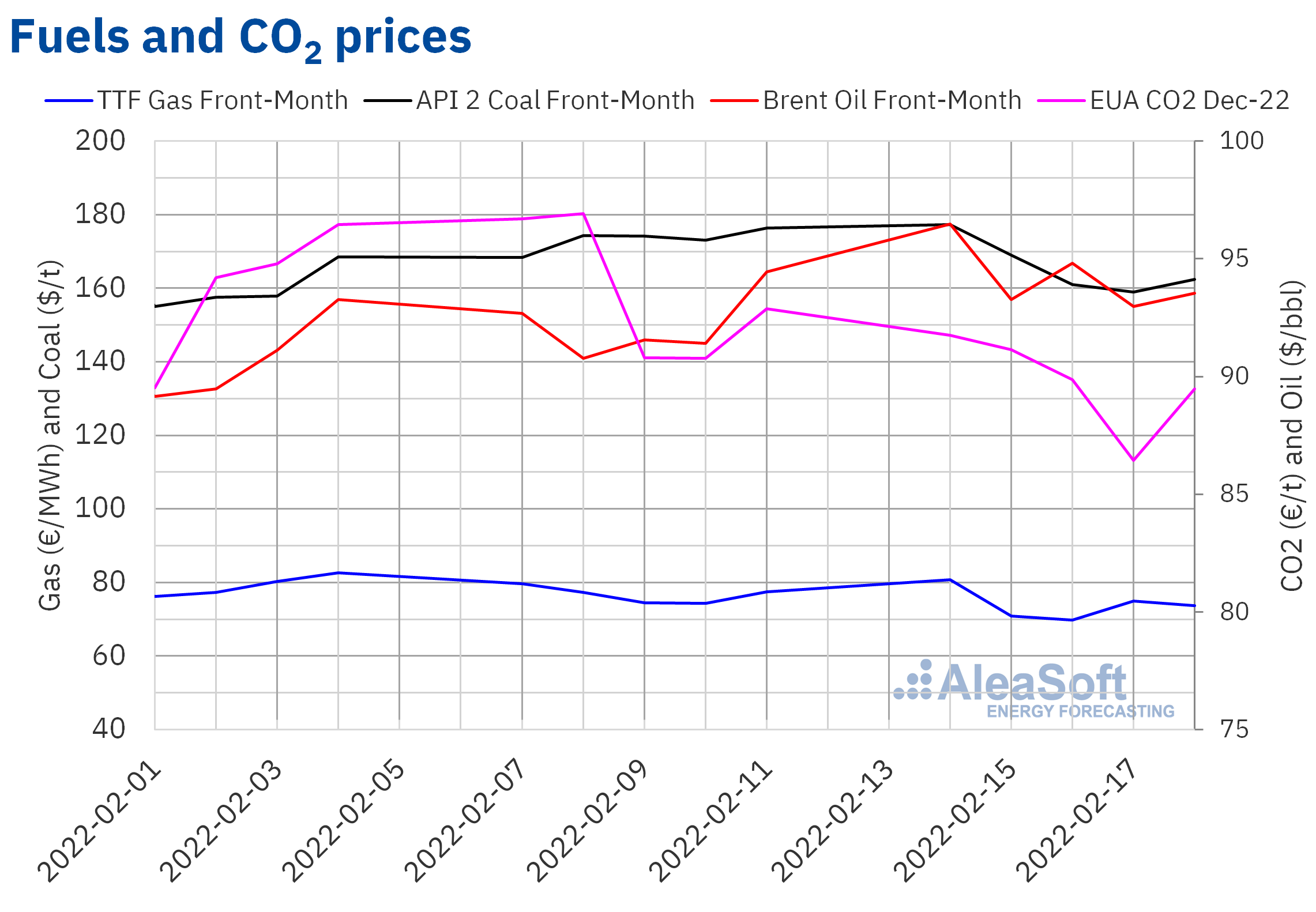 On March 17 at AleaSoft Energy Forecasting, a new webinar will be held to analyse the evolution of the energy markets and the prospects for spring 2022. Speakers from the consulting firm EY will participate in the webinar, who will analyse the main novelties in the regulation of the Spanish energy sector, renewable energy projects financing, importance of PPA and self‑consumption, as well as the main considerations to take into account in portfolio valuation.