The solar energy production recovered in large part of the European electricity markets last week compared to the previous seven days. In Spain, Portugal and France, the increases were 22%, 14% and 8.4% respectively. While in Germany the production with this technology decreased by 20%, after increasing during the last three weeks. The level of the Italian solar energy production remained similar to that of the week of December 30, with a decrease of less than 1 GWh.

In year‑on‑year terms, the solar energy production until January 12 of this year doubled in Germany compared to the same period of 2019. In the rest of the continent’s markets there were also increases. In the case of France and Portugal, the increases were 10% in both markets, while in Spain and Italy greater increases were reached, of 14% and 19% respectively.

At AleaSoft it is expected that this week the generation with solar technology in Germany will be restored, while in Spain and Italy it will fall. 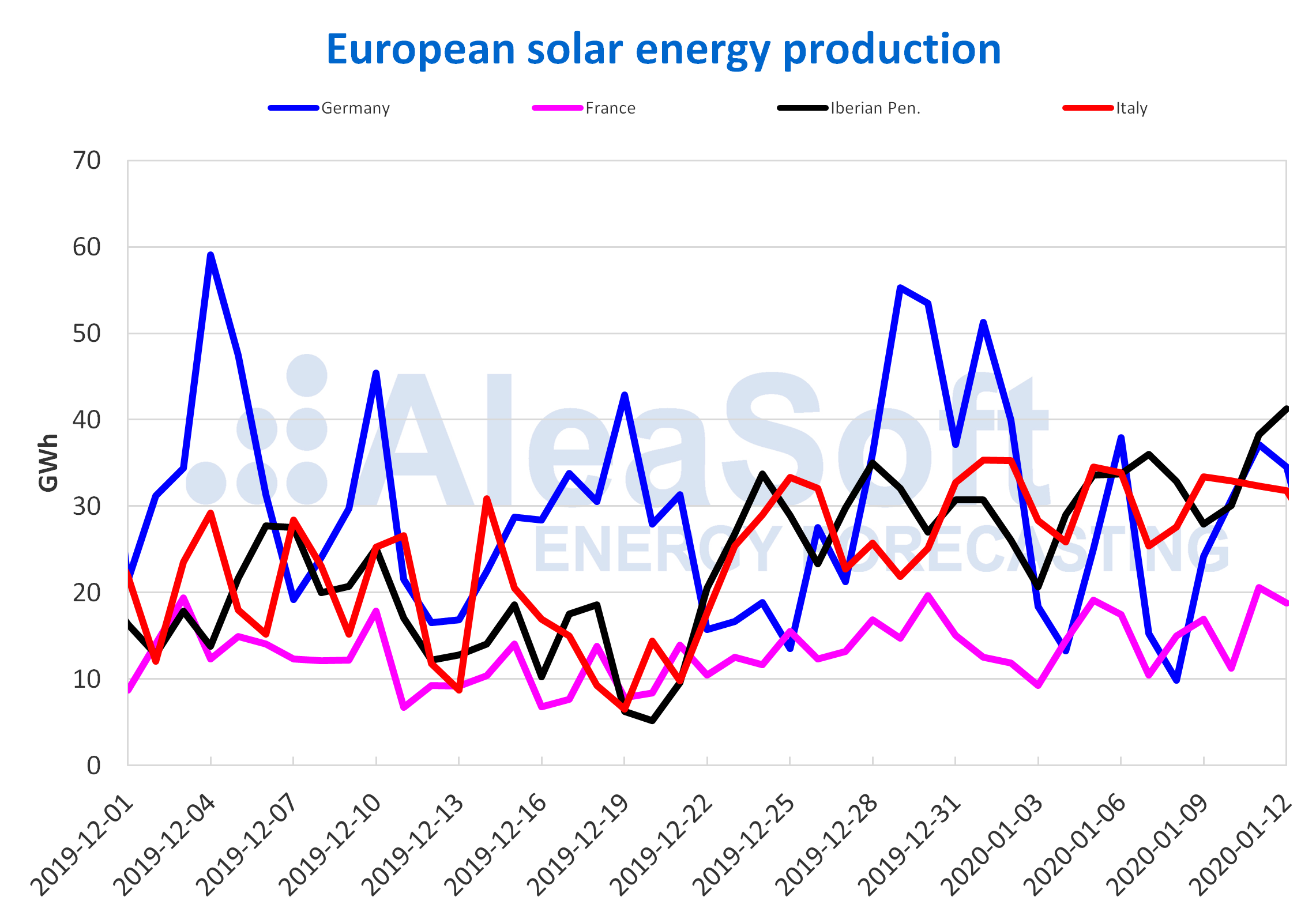 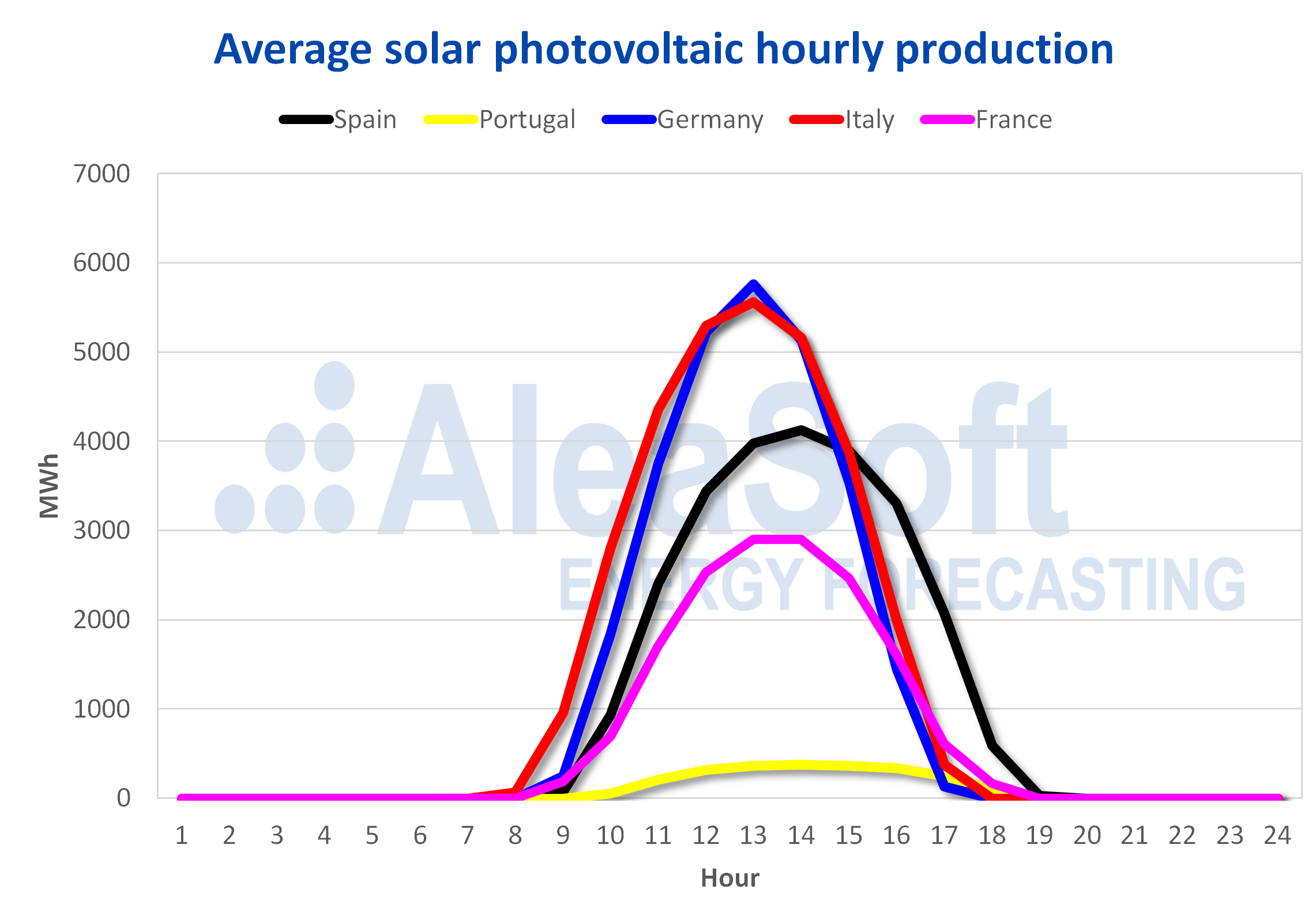 During the days from January 6 to 12, the wind energy production rose, as well as the solar energy production, in most European markets. In this case, the markets of Spain, Portugal and France registered significant increases of 31%, 66% and 71% respectively. The wind energy generation of the German market increased for the second consecutive week, with a variation of 6.0%. On the other hand, the Italian market suffered a 30% drop.

The wind energy production of the elapsed days this month until January 12 had unfavourable variation rates in almost all the markets of the continent. The French market was the only one where it increased by 28%. The declines in Spain and Portugal were the most pronounced, with values of 52% and 56% respectively. In Italy the decrease was 29% and in Germany 8.6%.

For this week, the AleaSoft’s analysis indicates that the generation from this renewable source will increase in all electricity markets, except in Italy. 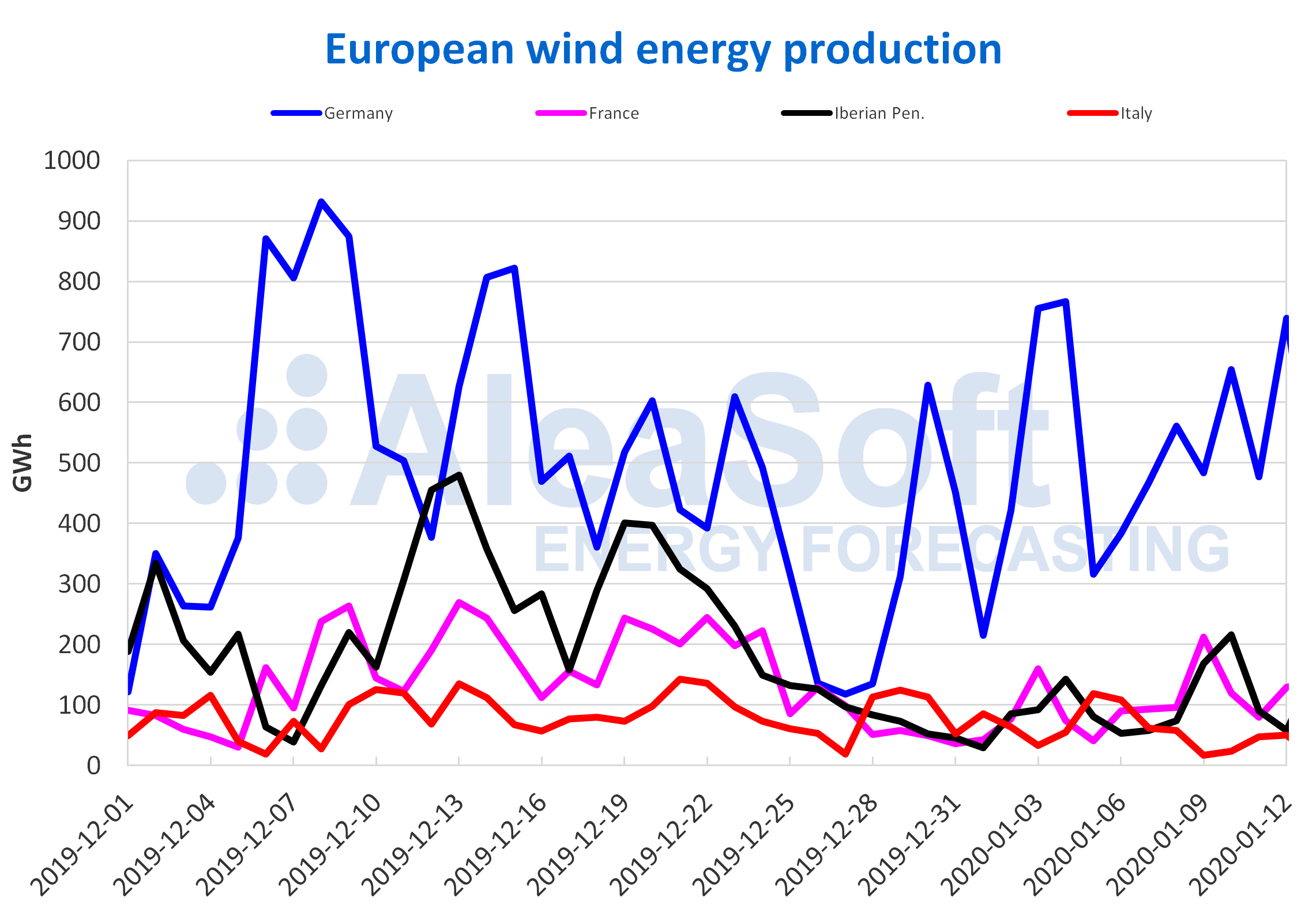 The last two weeks were marked by the holidays of the end and the beginning of the year. The influence of these caused increases in electricity demand in all markets during the past week compared to the week of December 30. In Italy it was where it increased the most, with a difference of 20%. The increase in Germany was 16%, while in Portugal and Spain it was 13%. The increase in France was somewhat smaller than in the rest, with a variation of 2.9%. When correcting this effect, the variations were ‑0.6%, ‑3.5%, 2.0% and 1.0% in Germany, France, Portugal and Spain respectively.

For this week, increases in electricity demand are expected in most electricity markets except in Portugal. 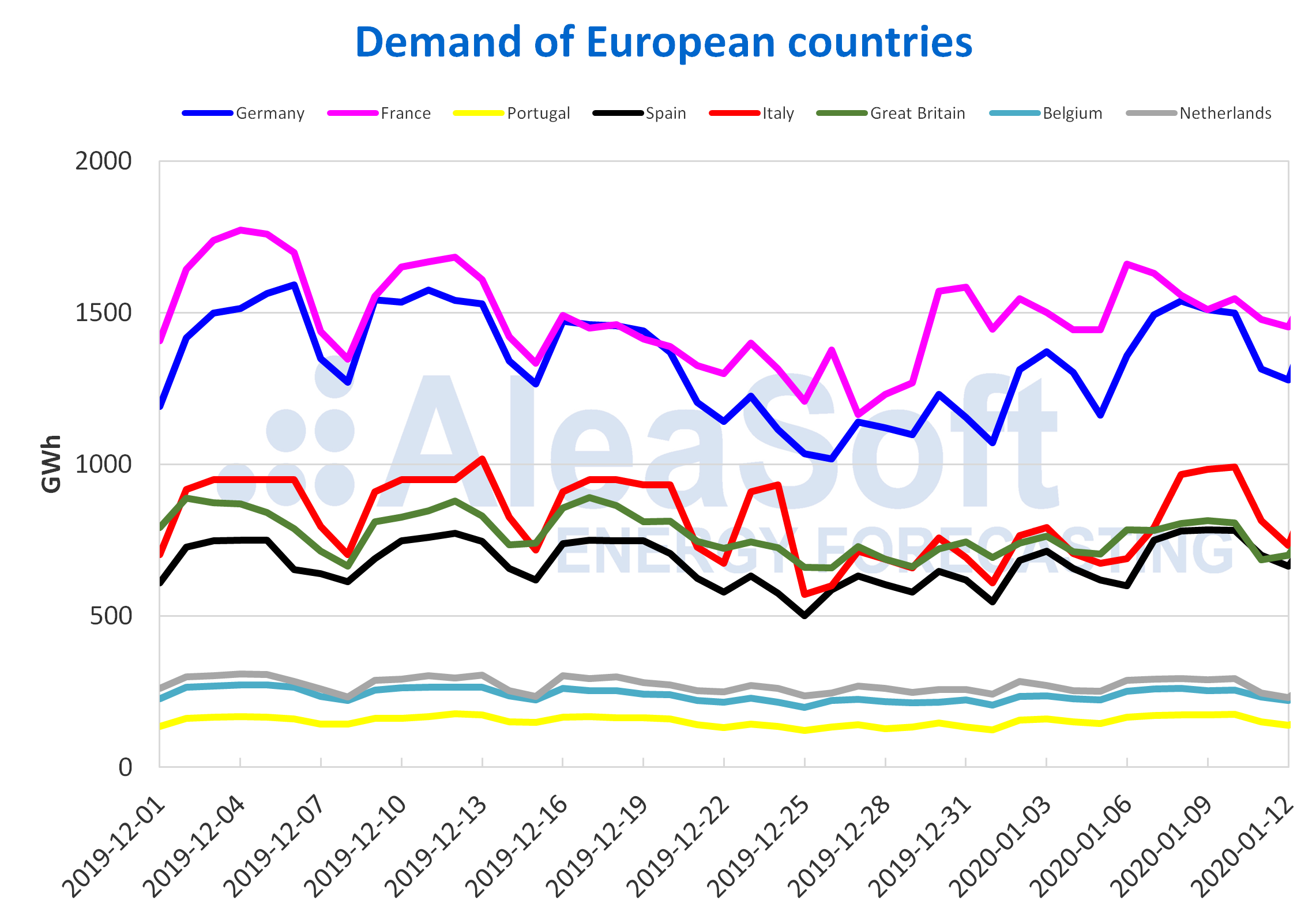 During the past week the prices in most European electricity markets rose backed by an increase in electricity demand, despite registering warmer temperatures than the previous week. The IPEX market of Italy, with a variation of 18%, was the one with the greatest increase, while the N2EX market of Great Britain was the one with the smallest increase, only 0.5%. The rest of the markets registered increases between 1.3% of the EPEX SPOT market of the Netherlands and 14.2% of the MIBEL market of Spain and Portugal. On the other hand, the EPEX SPOT market of Belgium and the Nord Pool market of the Nordic countries were the exception, where the prices fell 1.4% and 8.6% respectively.

The Italian market was the one with the highest price during the last week, with a weekly average of €48.48/MWh. In the second position the Iberian market followed it with €43.05/MWh and in the third position the British market with €41.63/MWh. Meanwhile, the Nordic countries market, with an average of €26.66/MWh, was the one with the lowest price for most of the week, followed by the German market, with a weekly average of €33.97/MWh. The rest of the markets were around €36/MWh and €37/MWh.

This Monday, January 13, the Nord Pool market of the Nordic countries continues to lead the markets with lower prices, with a daily average of €26.35/MWh. While the IPEX market, with an average of €54.28/MWh for this day, continues to be the one with the highest price. The rest of the markets settled with prices between €37.68/MWh of the EPEX SPOT market of Germany and €46.49/MWh of the MIBEL market of Spain and Portugal. 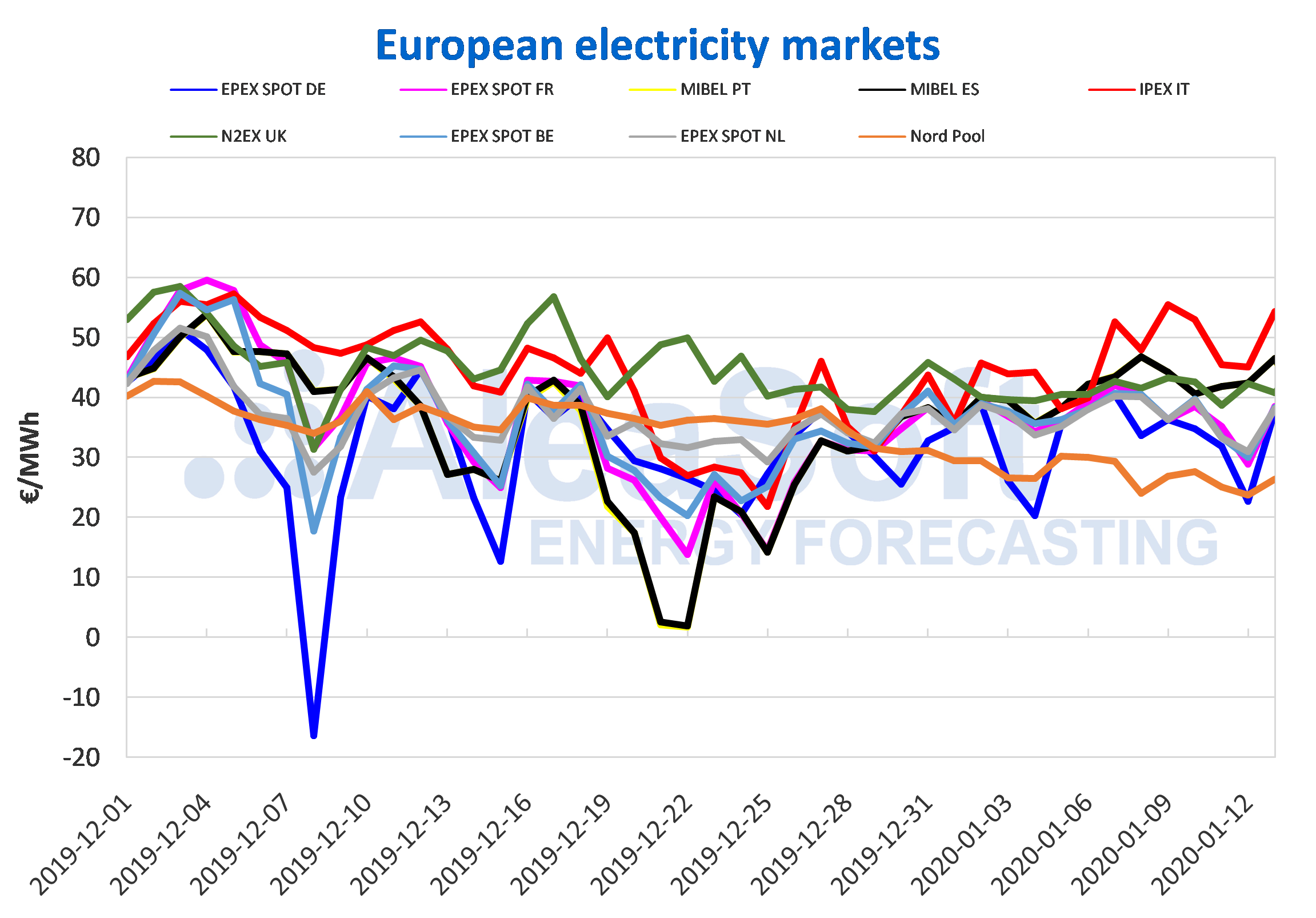 This week, the prices are expected to decrease in most European markets, mainly as a result of increased wind energy production. In fact, the prices of Tuesday, January 14, were lower than those of Monday 13 in most markets, except in the Nordic countries and Italy.

The European electricity futures prices for the second quarter of 2020 settled last Friday, January 10, below the previous Friday in all the markets analysed by AleaSoft. The lowest settlement price of last week was €26.07/MWh in the ICE market of the Nordic countries. This market, together with the NASDAQ market of the Nordic countries, also registered the greatest variation, with a decrease of 5.1% in both cases. The price declines were also accentuated in the UK ICE and EEX markets, which ended the week 4.7% and 4.8% lower. On the other hand, the EEX market of Italy was the one that registered the least variation with a ‑0.2% difference compared to Friday, January 3.

In the case of the European electricity futures for the year 2021 the behaviour was heterogeneous at the end of last week. The UK’s ICE and EEX markets were close to 2.0% lower than Friday, January 3. Meanwhile, the ICE market of Belgium, the EEX market of Spain and the OMIP market of Spain and Portugal fell by around 1.0%. The rest of the analysed markets ended the week with increases compared to the previous week.

The Brent oil futures prices for the month of March 2020 in the ICE market began last week with the upward trend of the previous week. But, as of Tuesday, January 7, this trend changed and the prices began to decline. This downward trend was found the rest of the week and on Friday, January 10, the settlement price was $64.98/bbl. This value is 5.3% lower than the one of the previous Friday and it is the lowest registered so far this month.

Despite the cuts in production by OPEC and its allies, as tensions in the Middle East decrease, the likelihood that an excess production causes a decrease in prices increases. However, the signing this week of the first phase of the trade agreement reached between China and the United States could influence prices upwards.

The TTF gas prices in the spot market started last week with increases. But for Wednesday, January 8, the prices fell 6.0% to €11.65/MWh. Subsequently, the prices stabilised and the index price for Monday, January 13, is €11.76/MWh.

The API 2 coal futures prices in the ICE market for the month of February 2020 the first days of last week showed a fairly stable behaviour with values around $53.80/t. But on Thursday, January 9, they started an upward trend. On Friday, January 10, continuing the increases, the settlement price was $54.50/t, the highest so far this year.

This is related to an increased demand for coal in Asia after the import restrictions by China last year, as well as the decrease in the amount of coal available for export from South Africa due to the flooding in the mining areas.

The CO2 emission rights futures prices in the EEX market for the December 2020 reference contract fluctuated during the past week, registering values between €24.08/t of Wednesday, January 8, and €24.68/t of Thursday, January 9. On Friday, January 10, the settlement price was €24.21/t, 3.1% lower than that of the previous Friday.

The auctions and sales to be held this week could lower prices. On the other hand, the Brexit process and the uncertainty about its consequences on the availability of the CO2 emission rights will also continue to condition the evolution of the prices. 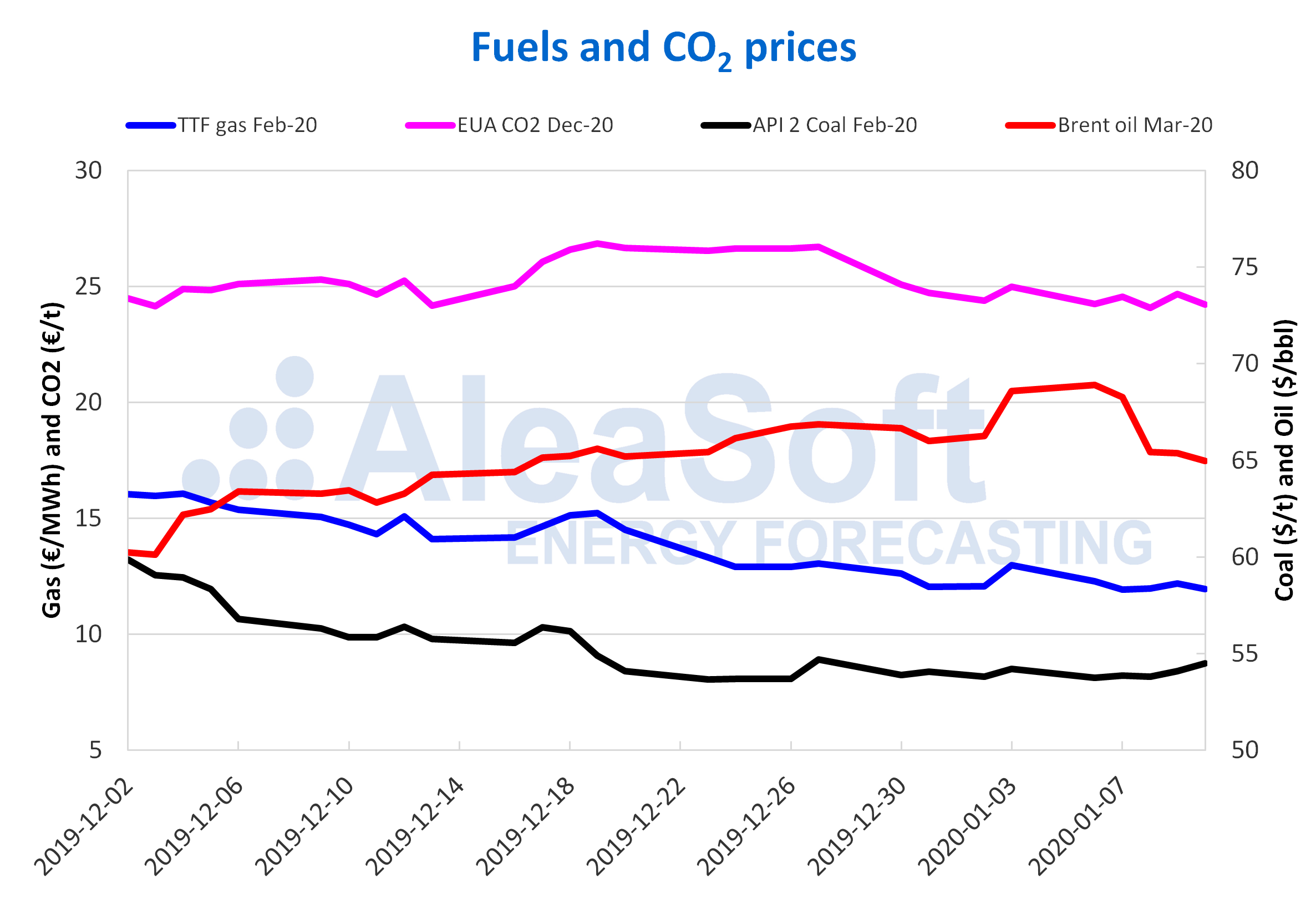