AleaSoft, January 30, 2020. At the updated draft of the NECP, which went to public consultation last week, the commitment to the solar photovoltaic energy stands out, whose Target Scenario went from 37 GW to 39 GW in 2030. There are other important changes that were analysed at AleaSoft and are detailed in this article, such as the increase in the forecast for the use of renewable energy in transport from 22% to 28%.

On January 23, the Ministry for Ecological Transition and Demographic Challenge opened the public information period of the Study of the Strategic Environmental Assessment (SEA) of the Integrated National Energy and Climate Plan (NECP) 2021‑2030 updated draft. This plan has been updated taking into account the recommendations that were raised in Brussels, as well as the allegations received in the public consultation process opened in February 2019. The current public information period, which will end on March 25 of this year, would be the last procedure prior to the final approval of the plan by the European Commission.

At AleaSoft an analysis of the modifications of the NECP updated draft was carried out and the most significant changes are listed below.

Electrification and decarbonisation of the energy system

One of the fundamental points of the plan, in which some modifications could be observed in comparison with the previous version, was the electrification and decarbonisation of the energy system. In this sense, the updated draft increases the forecast for the use of renewable energies in transport via electrification and biofuels from 22% to 28%, values that are above the 14% required by the European Union in 2030. Regarding the main axes of decarbonisation in the transport sector, the updated version of the draft confirms that they are the modal change, the deployment of the electric mobility and the impulse to the manufacture and use of advanced biofuels.

Generation park of the Target Scenario

In the case of the installed capacity, the objective is to increase to 161 GW by 2030, unlike the 157 GW of the previous version of the NECP. A modification of the generation park of the Target Scenario for the period 2021‑2030 is included and it is noted that the transition to a decarbonised electricity system implies an important and sustained incorporation of renewable sources. Thus, among the main changes in the installed capacity scenarios is, in the first place, the solar photovoltaic energy, which increases approximately 2.3 GW above the 37 GW expected by the year 2030 in the previous plan, setting the new target at 39 GW. In the case of the wind energy, the possibility of introducing maritime facilities is contemplated, leaving undetermined the proportion in which this technology would be introduced offshore. But, although the percentage distribution between land and marine facilities is not mentioned, the introduction of offshore wind energy could be linked to an increase of about 75 MW above what was proposed by 2030 before the plan update. Another notable change in the updated draft is the incorporation by 2030 of 2.5 GW of storage, technology that was not previously contemplated.

The increase in generation with renewable technologies proposed in this update is aimed, among other things, to supply the need to generate with coal, a technology for which not only its use for 2020 and 2025 is considerably reduced, but now its elimination before 2030 is set. In the case of gas cogeneration, the proposed capacity by the end of this decade in the Target Scenario increases from 3.0 GW of the previous draft to 3.2 GW of the new draft and the measures to boost the high efficiency cogeneration with a total of 1.2 GW are maintained, for which the planned mechanism is the establishment of a multi‑year auction calendar.

There are also notable changes in the dimension of decarbonisation. In this sense, in the previous draft the objective was the reduction of greenhouse gases from 340 MtCO2‑eq emitted in 2017 to 227 MtCO2‑eq by 2030. In the modified draft a decrease is contemplated until 222 MtCO2‑eq.

Comparing the emissions registered in 2015 with the evolution of emissions by 2030, the sectors of the economy that will reduce their emissions the most in that period continue to be the electricity generation sector, the mobility and transport sector, and the residential, commercial and institutional sector in both drafts.

In the transport sector the reduction is a consequence, according to the plan, of the important modal displacement from the conventional combustion vehicle to the collective public transport, the shared transport and the non‑emitting modes, and as a result of the general delimitation of low emission areas in cities with more than 50 000 inhabitants as of 2023, where the limitation of access to the most emitting and polluting vehicles is expected.

Another point that was modified was the estimation of investments in the period 2021‑2030. In this case, the total investments required to achieve the NECP objectives were increased from EUR 236 billion to EUR 241 billion. Despite this increase, the amounts allocated to renewable energy and saving and energy efficiency were reduced. In this way, EUR 9871 million less than what was planned in the previous draft will be available for renewable energies, while for saving and efficiency the figure was reduced by EUR 2936 million. On the contrary, in this update of the plan, the grids and the electrification were the most benefited, with an increase in the budget of EUR 16 733 million with respect to the previous plan. 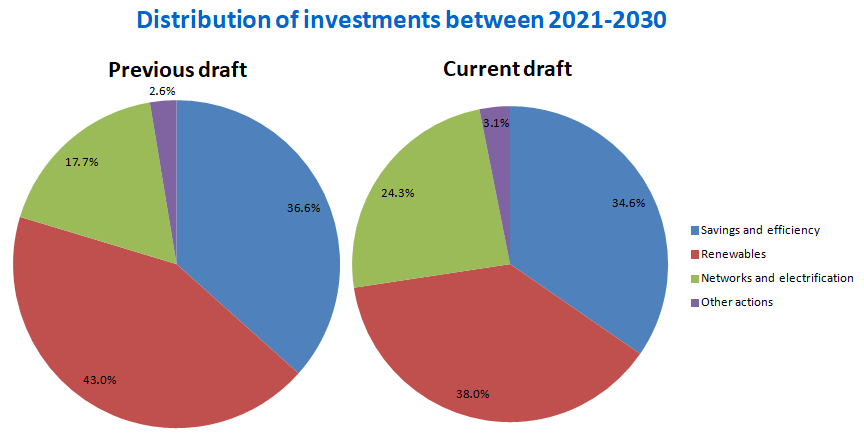 In spite of the change in the total and the distribution of investments, in this update the will of the Government to continue promoting private sector investments is maintained so that these are 80% of the total. This sector will be mainly associated with the deployment of renewable energies, distribution and transport grids and a large part of saving and efficiency measures. The rest of the investments would be made by the public sector and would be associated with energy saving and efficiency measures and actions associated with the promotion of sustainable mobility and modal change. In the case of public sector investments a part will come from European funds.

Dependence on imports with the existing policies and measures

As a result of the measures contemplated in the NECP, 2021‑2030, the ratio of energy dependence of Spain will decrease in 2030. At this point, the recent update of the NECP proposes a more realistic evolution than the proposal of the previous draft, since it assumes that by 2030 the energy dependence in Spain will be 61%, that is, two percentage points above. Specifically in the case of the importation of fossil fuels (coal, oil and gas) in the update of the plan it is expected to be of 67 020 ktoe by 2030, while in the previous plan 63 470 ktoe were expected by the same date.

Targets of the NECP

The measures contemplated in the NECP draft are aimed at achieving by 2030 a 23% reduction in greenhouse gas emissions compared to 1990, a 42% of renewable energy in the final use of energy and a 74% in the electricity generation, in addition to a 39.5% improvement in energy efficiency. It is noteworthy that in this draft the commitment to the environment is maintained together with more realistic policies and more accurate long‑term forecasts.