AleaSoft, January 30, 2020. The wind energy production increased this week in all European markets, which together with lower demand led to lower prices in all markets of the continent. This week the TTF gas and API 2 coal futures prices for February 2020 broke the minimum record for the last two years again. The prices are expected to rise next week as a result of colder temperatures and lower wind energy production.

The production of this month of January 2020, until Wednesday, January 29, increased in all European markets compared to the same period of last year. The most important rises occurred in Germany and Italy, with increases of 55% and 19% respectively. 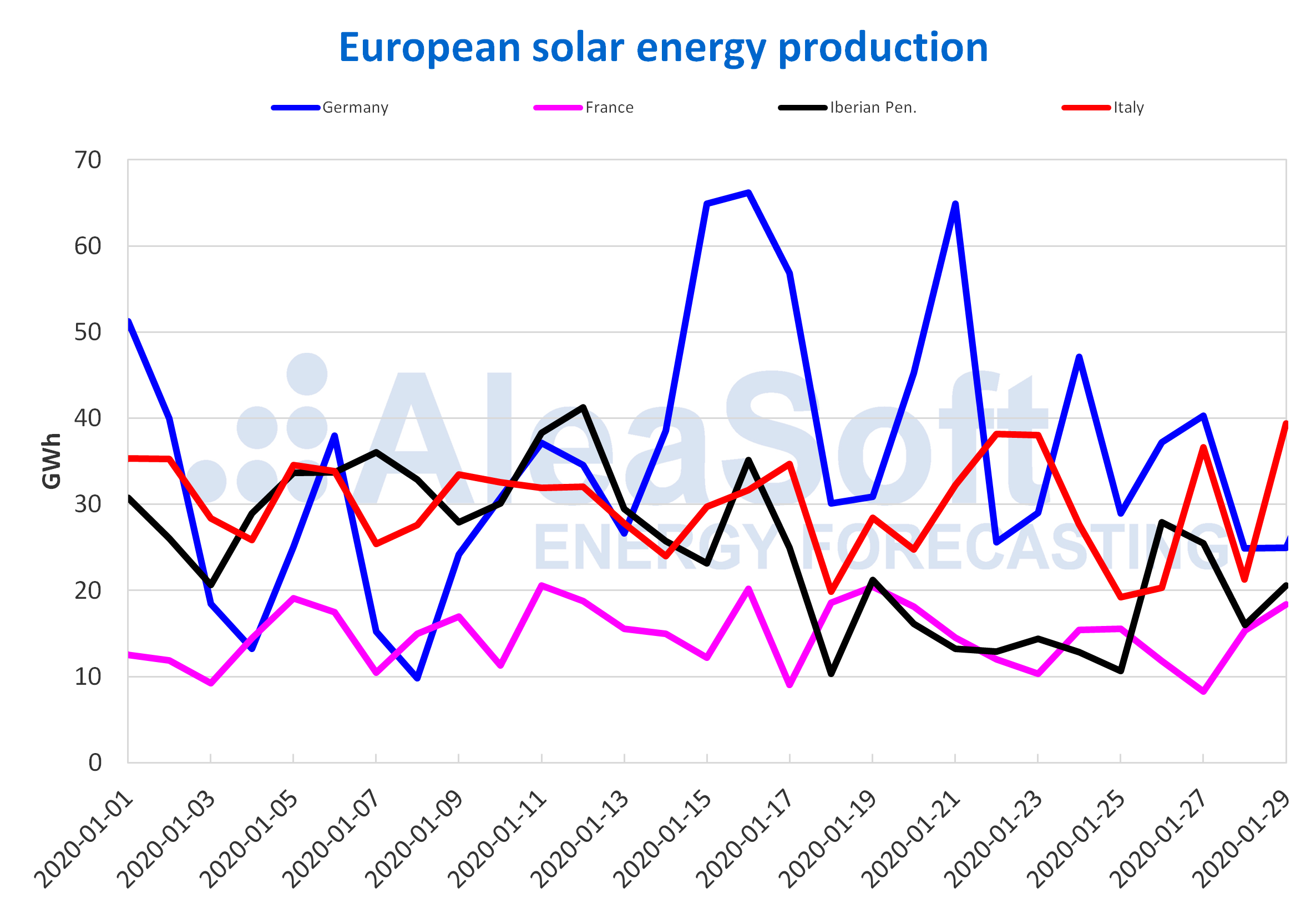 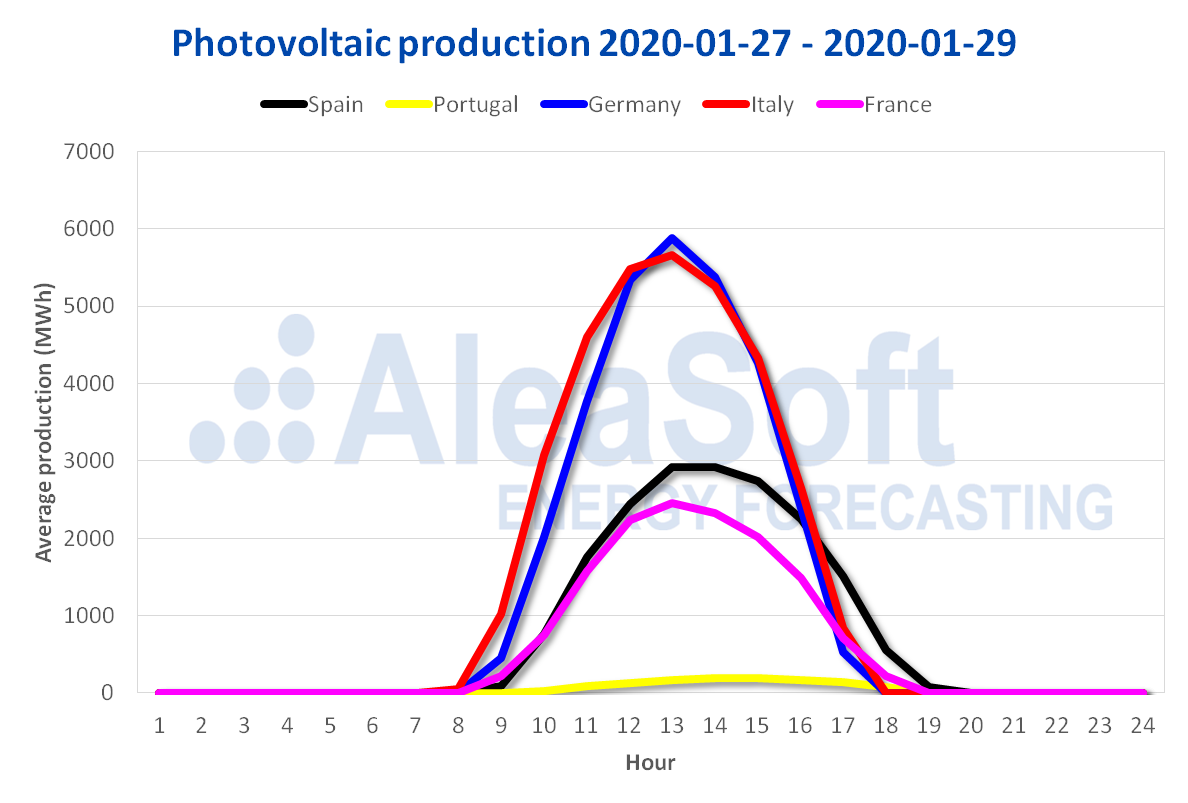 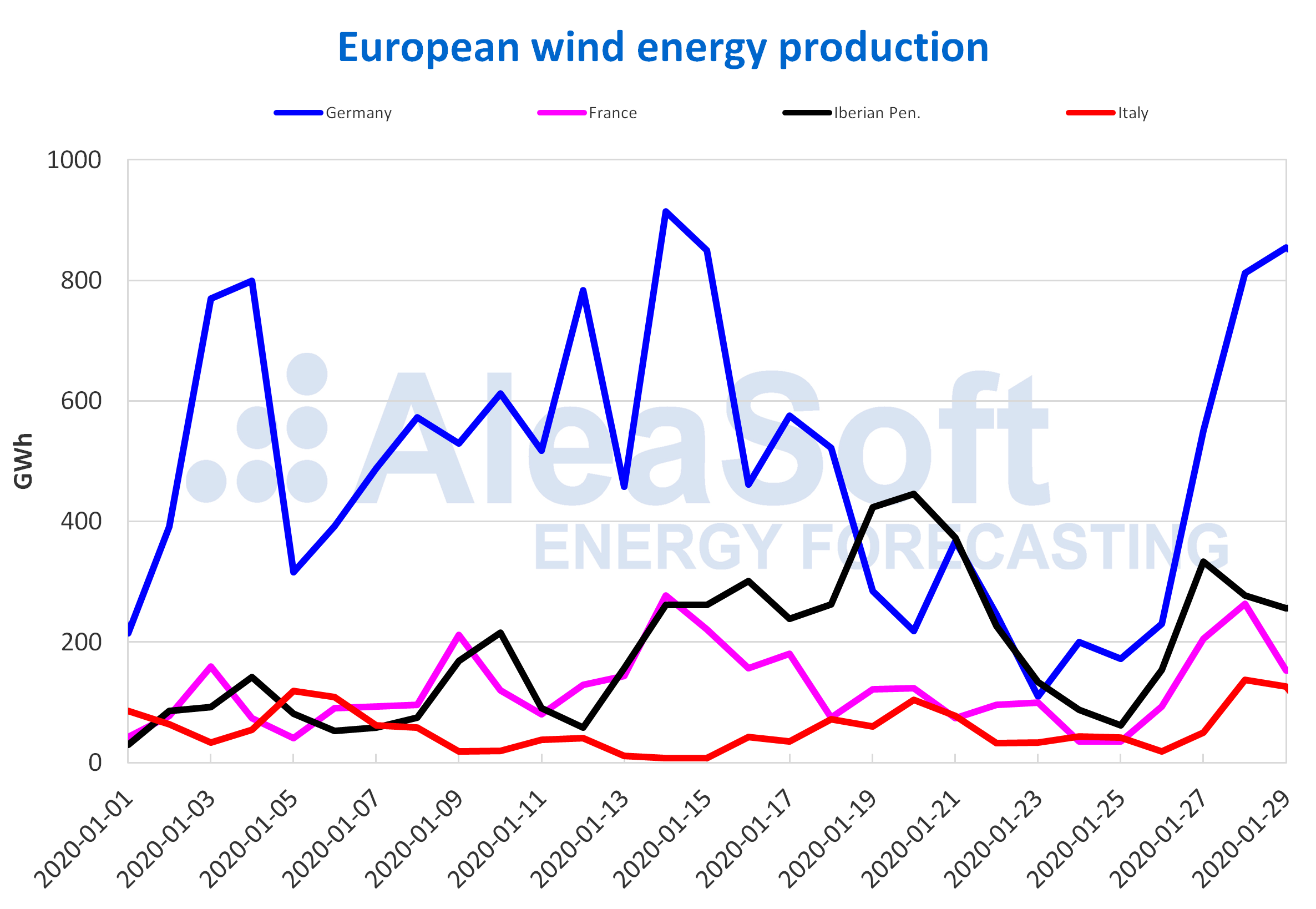 The electricity demand decreased the first three days of this week compared to the same days of the previous week in most of the analysed countries, except Germany and Portugal, where it increased by 2.8% and 0.4% respectively. In the rest of the countries the declines were between 8.8% of France and 1.1% of Italy. During the rest of the week, the demand is expected to continue falling due to the temperatures that will be less cold and the effect of the weekend. Next week, the demand is expected to increase with lower temperatures starting next Tuesday. 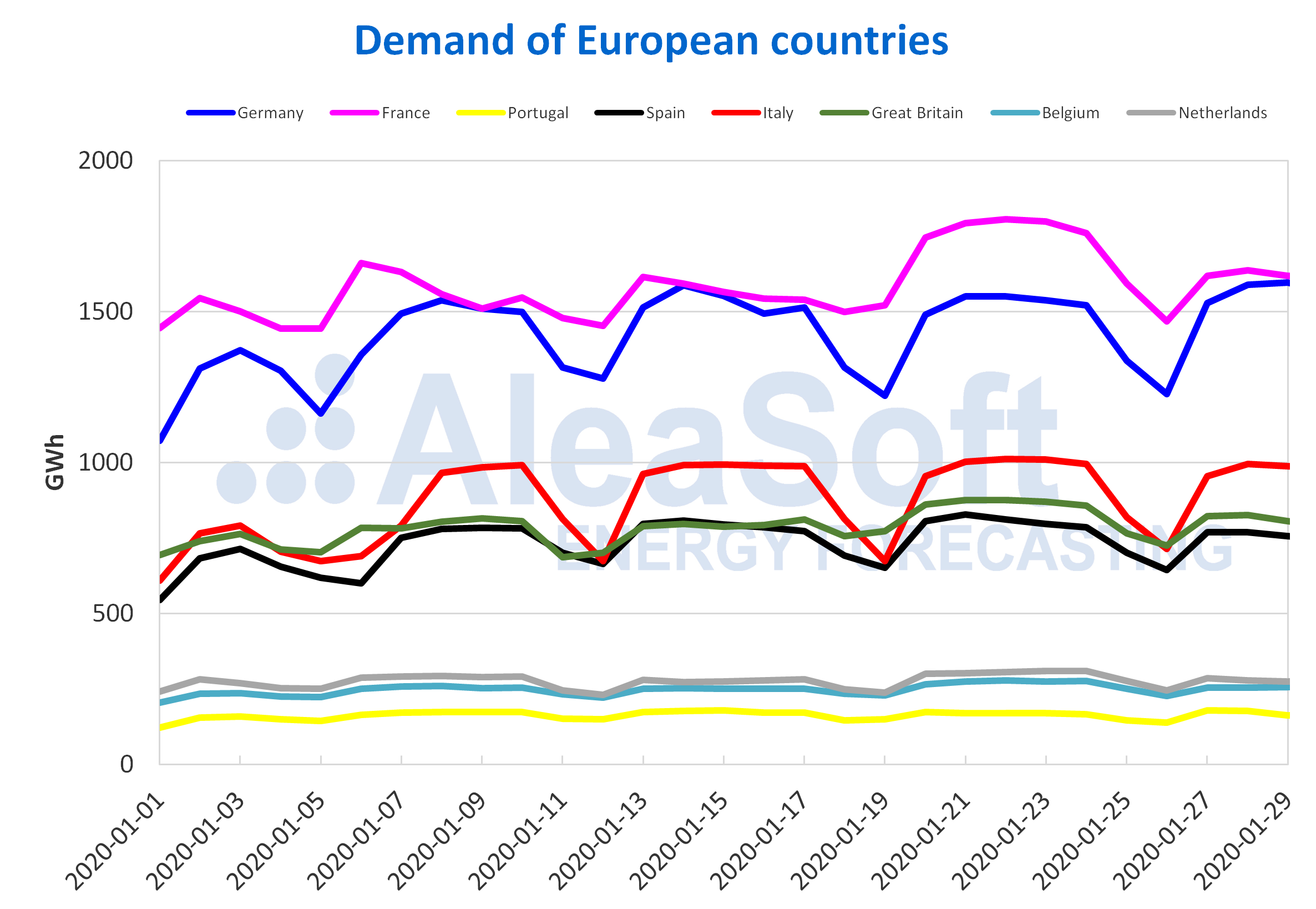 The average solar energy production in Spain, which includes photovoltaic and solar thermal energy, increased by 5 GWh from Monday to Wednesday of this week compared to the average of the previous week, which represented an increase of 42%. Regarding the year‑on‑year variation registered in the first 29 days of the month of January, the increase was 5.6%.

The average wind energy production of the first three days of this week exceeded the average of last week by 40%. However, so far this month there was a 21% year‑on‑year drop in production with this technology.

The electricity demand of Mainland Spain the first three days of this week decreased 6.2% compared to last week.

On the other hand, the nuclear power plants continue to operate and the nuclear energy production remains around 170 GWh per day. 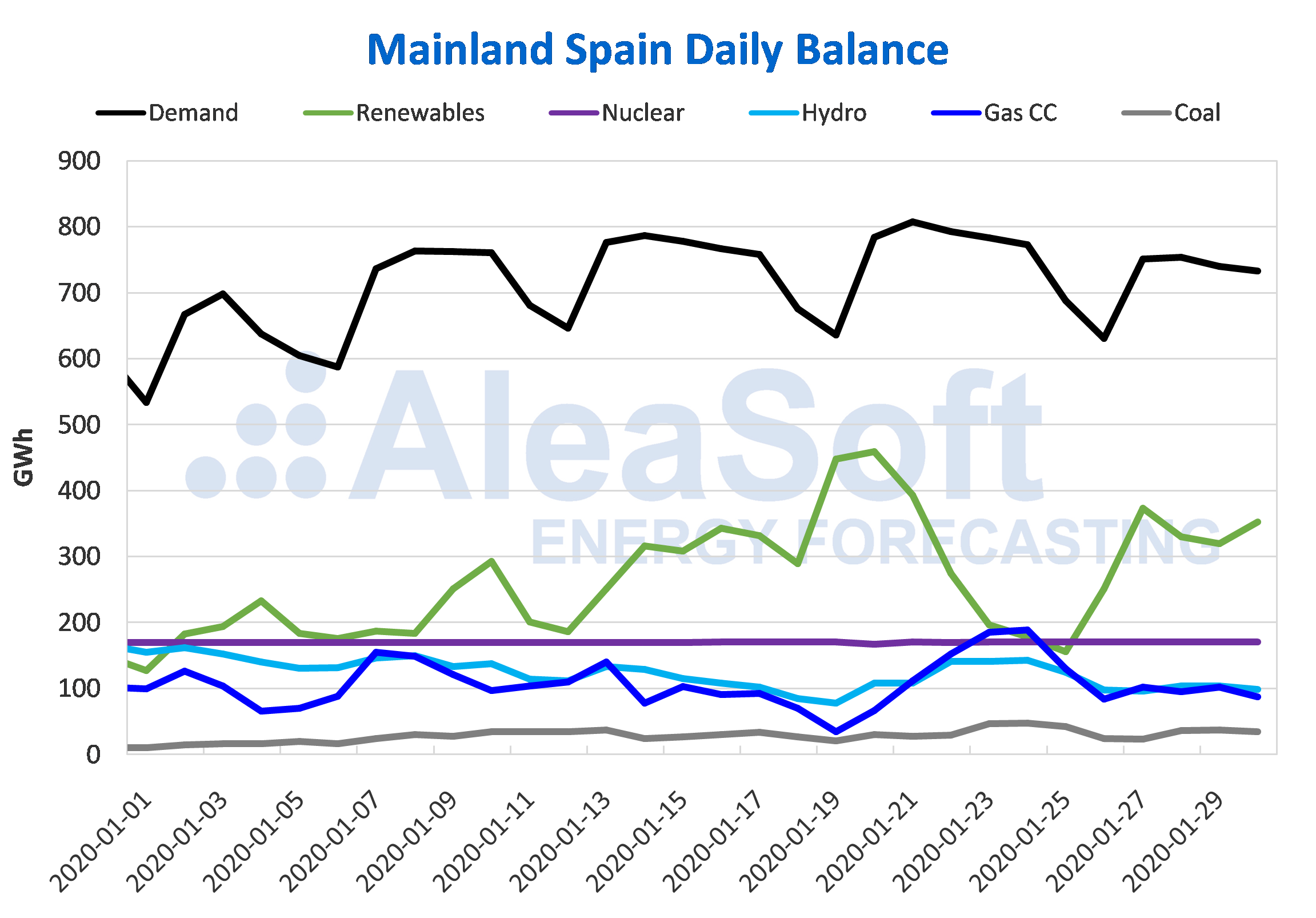 According to data from the latest Hydrological Bulletin of the Ministry for Ecological Transition and Demographic Challenge, the current hydroelectric reserves are 12 665 GWh, which represents 55% of the maximum available capacity.

In the first four days of this week, the European electricity markets prices decreased in general compared to the same days of the previous week, as we anticipated earlier this week. The EPEX SPOT markets of Germany, France, Belgium and the Netherlands were those with the greatest variation, with decreases between 24% and 28%. These markets had average prices ranging from €33.79/MWh of the German market and €36.29/MWh of the French market. On the other hand, the Nord Pool market of the Nordic countries, despite being the market with the lowest average price so far this week, of €21.30/MWh, was the one with the lowest decrease, of 0.4%. Meanwhile, the IPEX market of Italy was the one with the highest price in Europe, with an average of €45.84/MWh and a decrease of 6.4%. The N2EX market of Great Britain with a variation of ‑16% was the second market with the highest prices, averaging a price of €41.14/MWh.

According to the analysis carried out by AleaSoft, the decrease in prices during this week is due to the increase in wind energy production in general on the continent, as well as the decrease in electricity demand due to the less cold temperatures registered. 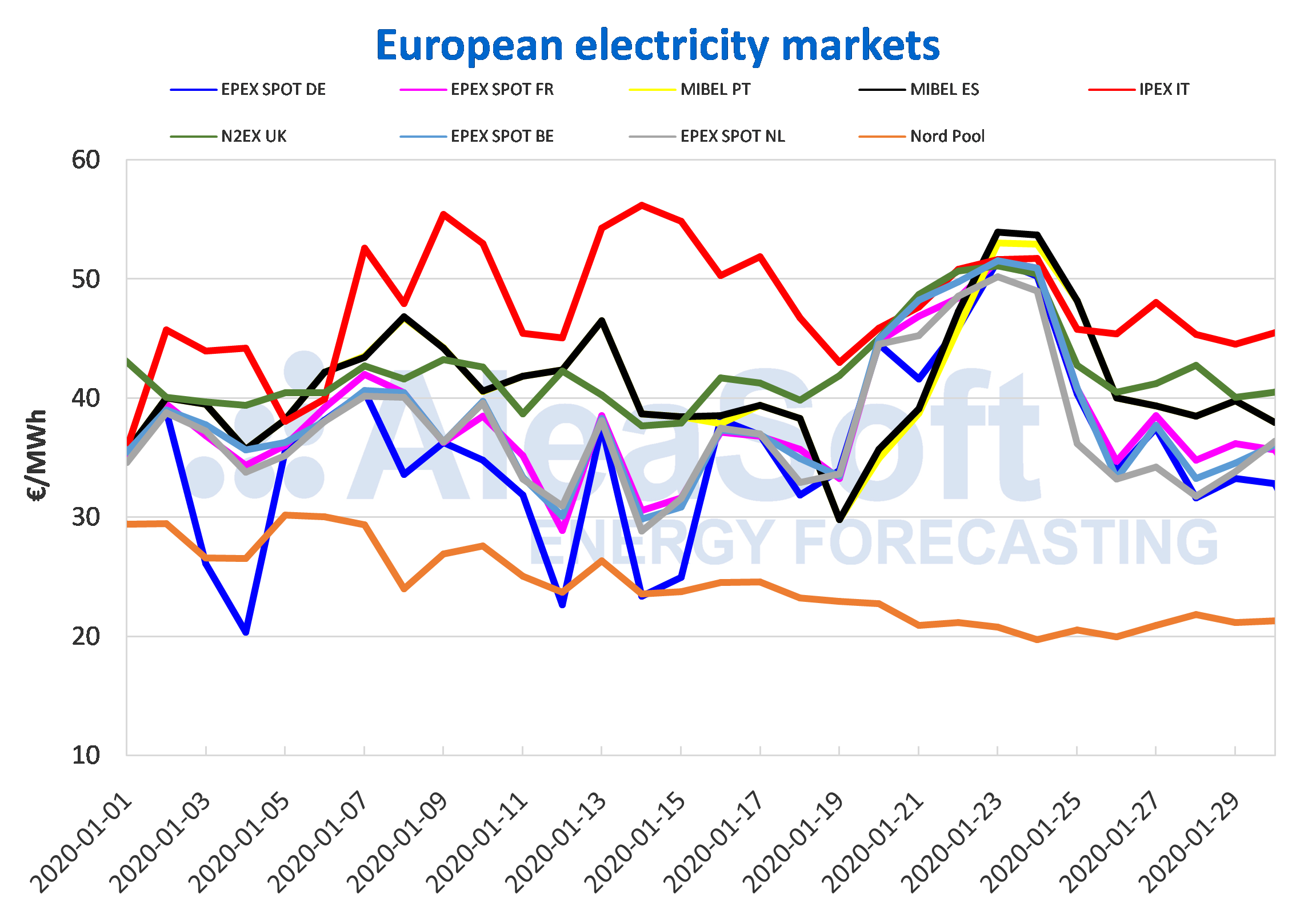 At AleaSoft it is expected that in the rest of the days of this week the prices of most European markets will continue to fall due to lower demand and less cold temperatures over the weekend. The prices are expected to increase next week, as temperatures will fall again, which will lead to an increase in electricity demand in most markets. However, it is expected that next week the prices will not reach the level of the week of January 20 in which several days the prices were around €50/MWh.

During the first four days of this week, the prices of the MIBEL market of Spain and Portugal had decreases of 12% and 9.9% respectively, compared to the same days of the previous week. With an average price of €38.88/MWh for both poles, it was the third in the ranking of the markets with the highest prices in Europe so far this week. These price drops compared to last week were the result of several factors: less cold temperatures that caused lower electricity demand, as well as a recovery of the solar and wind energy production since this week started.

At AleaSoft, the prices are expected to continue falling during the rest of the week, favoured by the decrease in demand over the weekend. On the other hand, for the next week they are expected to increase as a result of a greater demand due to new decreases in temperatures and a lower wind energy production.

The European electricity futures prices for the second quarter of 2020 remained with very little variation at the end of the session of Wednesday, January 29, compared to the values registered on Friday, January 24. The prices of most of the analysed markets ranged between ‑2.1% and 0.4%. The exceptions were the ICE and NASDAQ markets of the Nordic countries, which maintained the downtrend that they already had last week and settled this Wednesday almost 7.0% below the previous Friday.

The outlook for the futures prices for the 2021 calendar year of European markets was identical to that registered for the second quarter of 2020. In this case, the variations in the settlement prices of Wednesday, January 29, remained in the range from ‑1.4% to 0.0% of difference compared to last Friday. The above does not apply to the ICE and NASDAQ markets of the Nordic countries, which continued on the bearish path and settled 5.0% lower than in the session of Friday, January 24.

The concern about the global economic slowdown related to the expansion of the coronavirus will continue to exert its influence on prices in the coming days. However, the OPEC is considering advancing its meeting scheduled for early March in which the introduction of new cuts will be analysed in order to maintain the market balance.

The TTF gas futures prices in the ICE market for the month of February 2020 began this week with slight increases that allowed reaching similar settlement prices to those of the same days of the previous week. However, on Wednesday, January 29, there was a decrease of 5.9% compared to the previous day, reaching a settlement price of €10.15/MWh, the lowest of the last two years.

The TTF gas prices in the spot market the first days of this week were lower than those of the same days of last week. The index price reached for Thursday, January 30, is €10.30/MWh, the lowest after €9.47/MWh of November 1, 2019.

The API 2 coal futures prices in the ICE market for the month of February 2020 the first days of this week recovered. This allowed reaching a settlement price of $50.25/t on Tuesday, which coincides with the maximum value of last week, registered on January 23. But on Wednesday, January 29, the prices fell to a settlement price of $49.00/t, which constitutes a new historical low for the last two years. The decline in demand in China due to the outbreak of coronavirus may affect the prices in the coming days.

The CO2 emission rights futures prices in the EEX market for the December 2020 reference contract began this week with increases that allowed reaching a settlement price of €24.66/t on Tuesday, January 28. But on Wednesday, January 29, the settlement price fell to €23.99/t, the lowest of the last two weeks. This is related to the low gas prices that led coal generation to decrease, causing a decrease in demand for emission rights. It is expected that in February the prices may fall as a result of the Brexit due to the increase in supply. 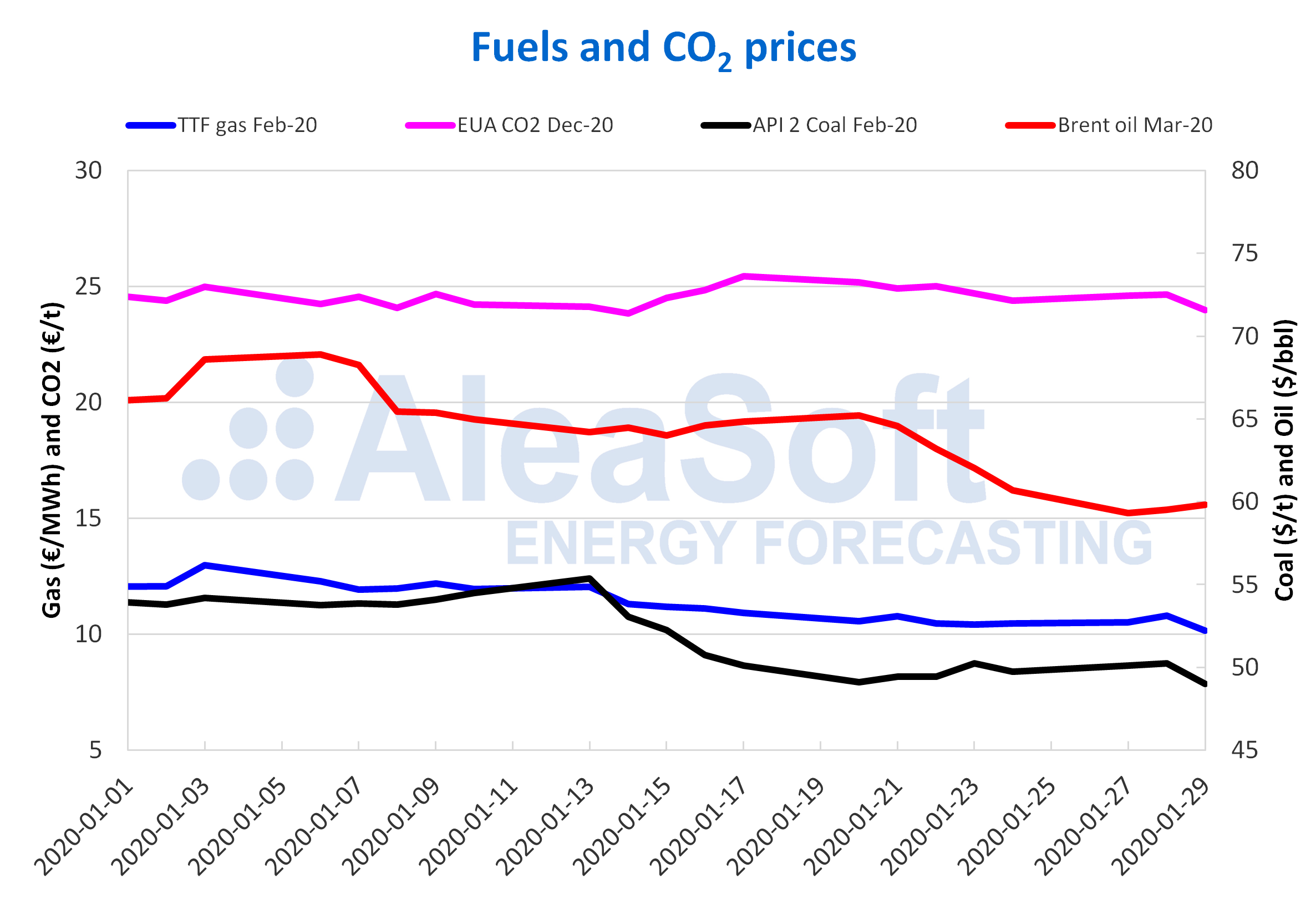 PrevAnteriorThe updated draft of the NECP commits to the photovoltaic energy with a scenario of 39 GW in 2030
SiguienteThe UNEF photovoltaic projects financing workshop: an occasion to look at the futureNext
Menu
Facebook-f Twitter Linkedin Instagram