AleaSoft, January 27, 2020. This week the European electricity markets prices are expected to fall, due to less cold temperatures and a recovery in wind energy production compared to last week, in which the prices rose due to the increase in demand because of the registered low temperatures. In the futures markets, the TTF gas prices continued at record lows. On the other hand, according to updated data from REE, in 2019 Spain broke the record for the installation of new photovoltaic capacity in one year.

The wind energy and solar photovoltaic energy binomial made a qualitative leap with 6124 MW of new installed capacity in Mainland Spain during 2019, according to updated data by Red Eléctrica de España (REE) on January 23. The photovoltaic park increased by almost 4 GW and with the 3988 MW of installed capacity in 2019 a new annual installation record was set. On the other hand, the wind energy capacity increased by 2136 MW and helped the wind energy to take the second place in the production mix during 2019, behind the nuclear energy.

The solar energy production declined in most European markets last week compared to the week of January 13. The fall was 36% in the Iberian Peninsula, while in both the French and German markets it was 12%. The Italian market maintained similar values, reaching a slight increase of 1.9%.

On the other hand, in the year‑on‑year analysis from January 1 to 26, 2020, the solar energy production increased in all markets of the European continent. The increase in the German market continues to be significant, and was 62% until the just ended week. In the rest of the markets, the increases were between 6.6% and 15%.

During this week, drops in generation with solar technology in Germany and Italy are expected at AleaSoft. In the case of Spain, the solar energy production is expected to recover. 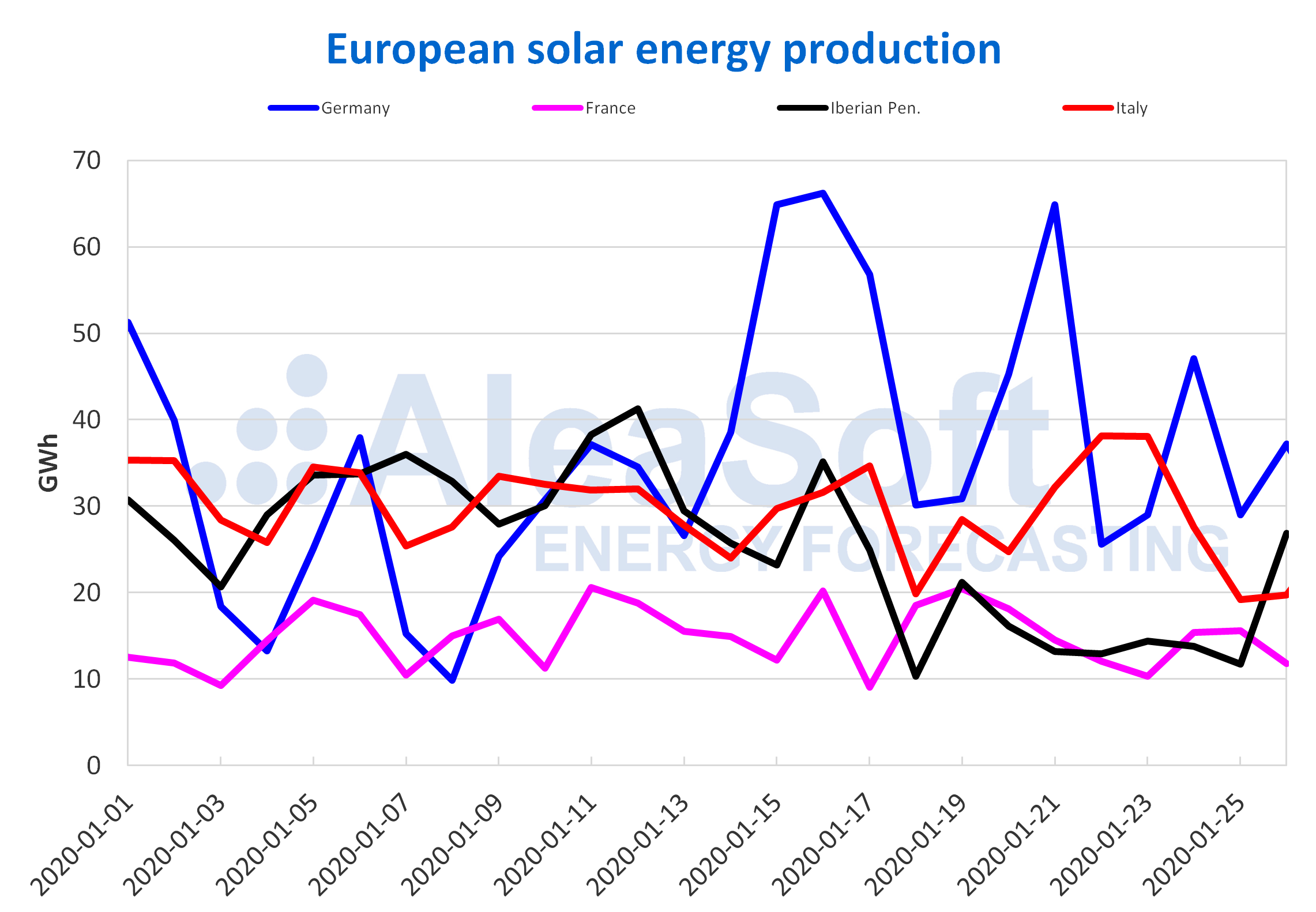 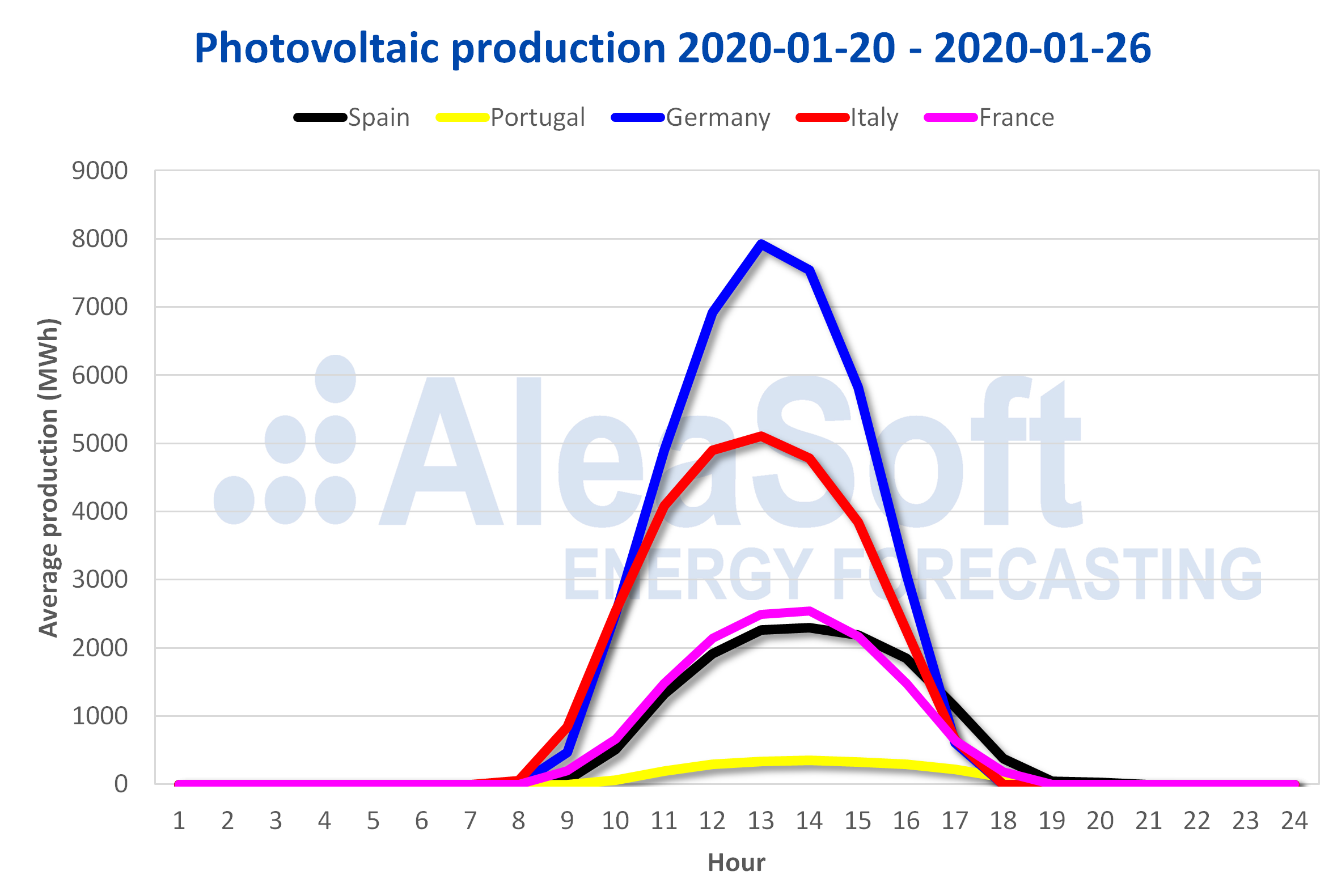 On the other hand, a new world record for the price of photovoltaic energy was set last week. This time it was a PPA for a project in Qatar, in which the settlement price was €14.03/MWh, about 67 cents lower than the previous mark reached at an auction in Portugal. The protagonists were the French group Total S.A. and the Japanese conglomerate Marubeni Corporation, who signed a 25‑year PPA where 800 MW of photovoltaic capacity were awarded.

The wind energy production fell last week compared to the previous seven days in much of the European electricity markets. At the beginning of the week, the production of the Iberian market rose, becoming the highest in the continent, but the trend changed and it decreased during the course of the week, similarly to the rest of the markets. The Italian market was the exception and the generation from this renewable source increased by 49%. In the rest of the markets there were declines. The greatest drop was 62% in Germany, followed by 53% of France and 22% of the Iberian Peninsula.

In year‑on‑year terms, there were also declines in the markets of the continent for the first 26 days of January, with the exception of the French market that had an increase of 37% and the small increase of 3.6% in Portugal. The decreases in the rest of the markets were 34%, 16% and 5.0%, in Italy, the Iberian Peninsula and Germany respectively.

For this week, recoveries of the wind energy production in most of Europe’s electricity markets and a decrease in the Portuguese market are expected at AleaSoft. 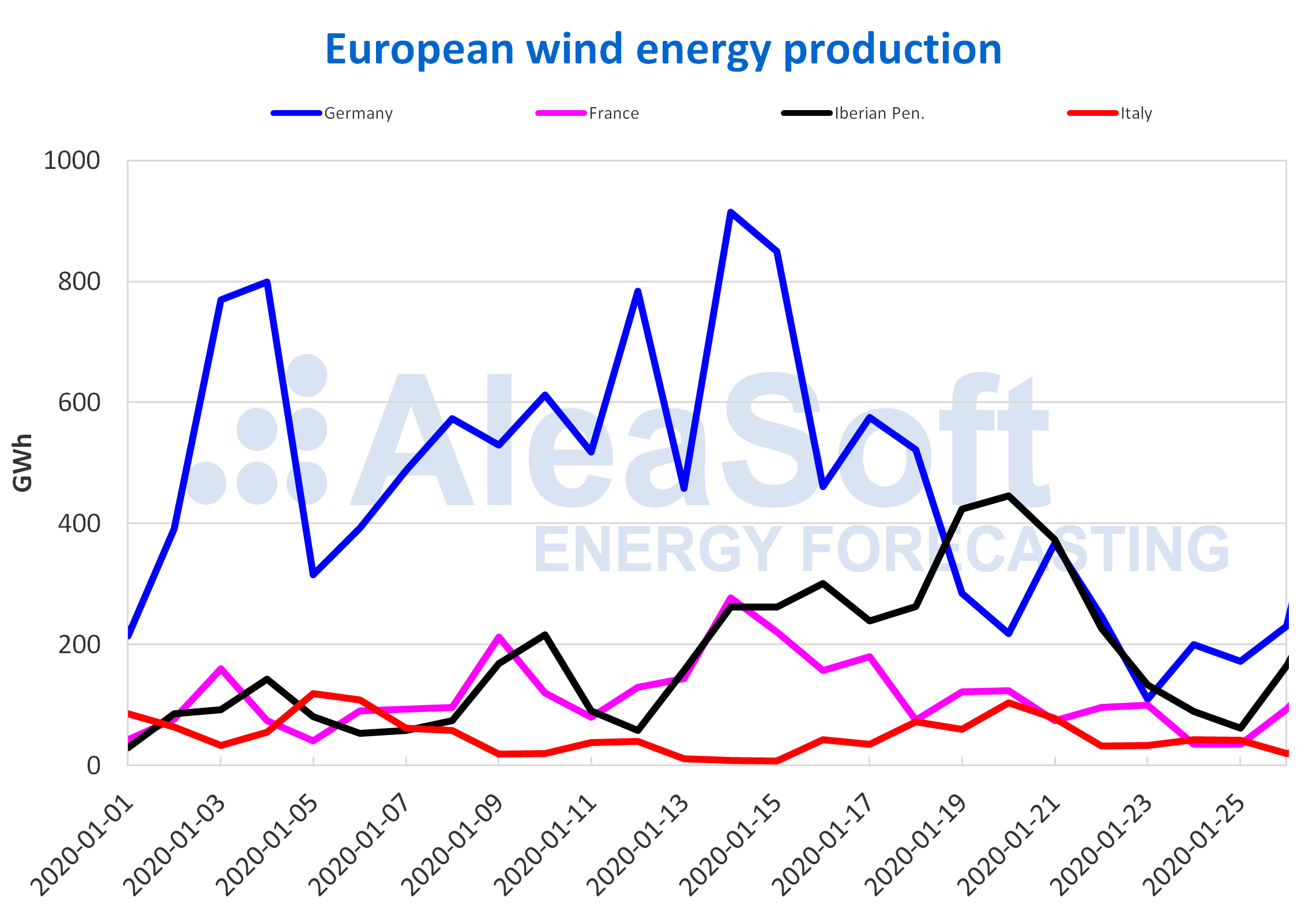 Last week, the average temperatures in Europe were lower than those of the week of January 13, reaching negative values in Germany. Although they were ascending towards the weekend, the influence of these falls caused the electricity demand to rise in general in the European markets. The French market was the one with the greatest increase in demand, with 10%. In the Netherlands the rise was 9.4% and in Great Britain 5.9%.

This week less cold temperatures are expected on the continent according to AleaSoft, and therefore, decreases in electricity demand compared to last week. 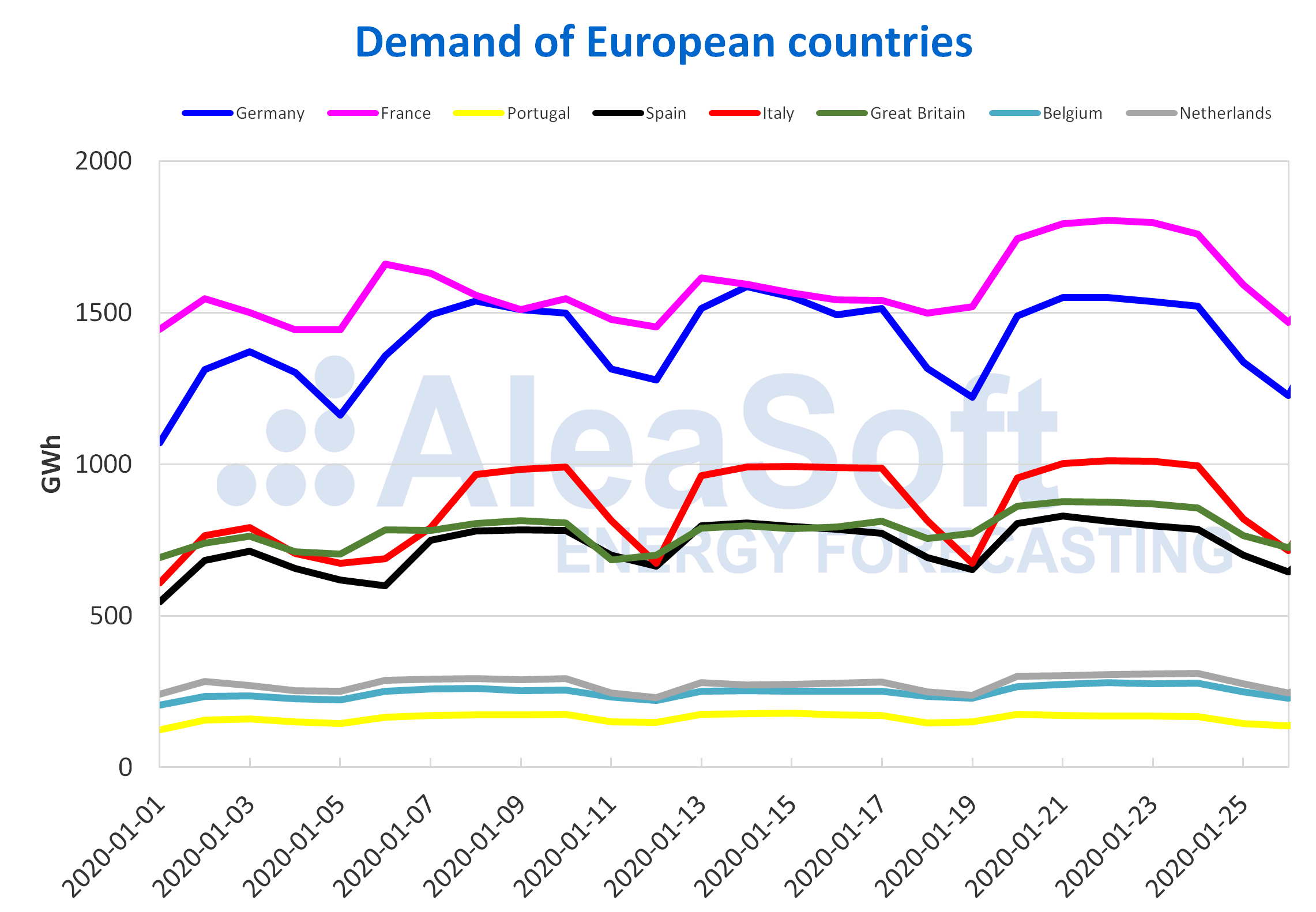 The prices of most European electricity markets increased last week compared to the week of January 13 and remained fairly coupled for most of the week. The IPEX market of Italy and the Nord Pool market of the Nordic countries were the exception, with decreases of 5.2% and 14% respectively. The Italian market, despite the decrease in the weekly average price, which was €48.41/MW, and having the highest daily average price only three days, concluded last week as the market with the highest prices in the European continent. Meanwhile, the first position in the ranking of markets with the highest prices was distributed during the week between the IPEX market, the MIBEL market of Spain and the N2EX market of Great Britain. On the other hand, the Nord Pool market, with an average of €20.82/MWh in the recently concluded week, continues to be the market with the lowest price in the continent. During the past week this market presented a downward trend, falling from €22.75/MWh of Monday, January 20, to around €20/MWh of the weekend. Meanwhile, the average prices of the EPEX SPOT markets of Germany, France, Belgium and the Netherlands showed the greatest variations, from 36% of the German market to 28% of the Netherlands market. The Portuguese market and the British market were the ones with the lowest increase, of 17%, followed by the Spanish market with 18%.

In the EPEX SPOT markets, with increases exceeding €10/MWh, the last week’s average prices were between €43.85/MWh of the Netherlands and €45.64/MWh of the Belgian market. The MIBEL market registered increases above €6/MWh and a weekly average of €44.81/MWh for the Portuguese pole and €45.82/MWh for the Spanish pole. On the other hand, the British N2EX market, with an increase of €7.0/MWh and an average of €47.02/MWh, was the second market with the highest prices during the past week, after the Italian market.

This Monday, January 27, the Nord Pool market of the Nordic countries continued to be the one with the lowest price, with a daily average of €20.92/MWh. While the IPEX market, with an average of €48.04/MWh for this day, continued to be the one with the highest price, followed by the British market, with a price of €41.24/MWh. The rest of the markets settled with daily prices ranging from €34.22/MWh of the Netherlands market to €39.34/MWh of the MIBEL market for Spain and Portugal. 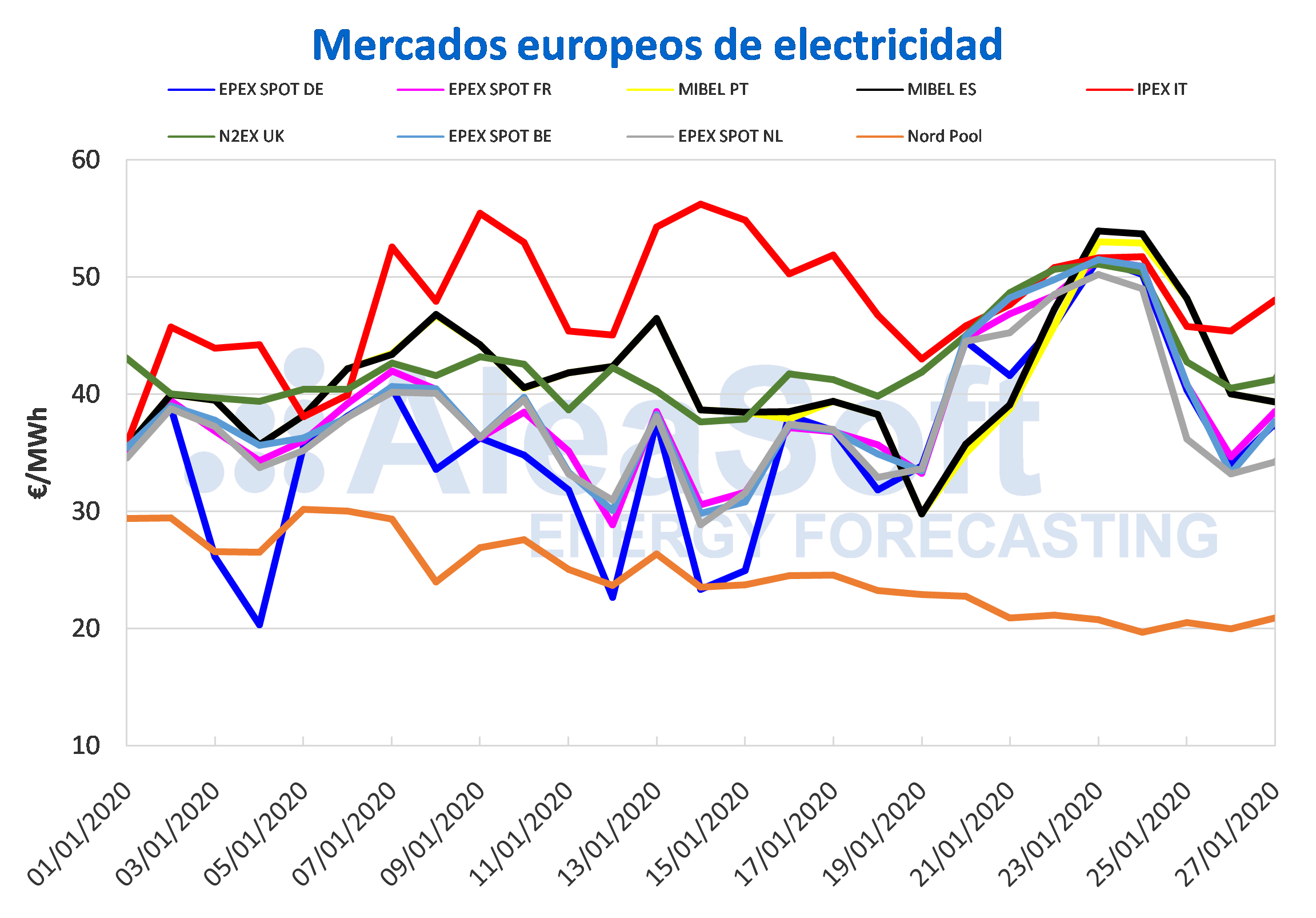 This week, the prices are expected to fall widely in European markets, as a result of less cold temperatures that will lower demand in much of the continent and a recovery in wind energy production. On the other hand, in France, the workers of the electricity sector called a strike that began on Friday, January 24, and will last until Friday, January 31, and that will cause reductions in the country’s energy capacity. However, at AleaSoft it is estimated that the prices will not suffer significant variations due to this effect, taking into account the behaviour during previous stoppages in this month and in December of last year.

At the end of last week, on Friday, January 24, the European electricity futures for the product of the second quarter of 2020 were down in most European markets compared to Friday of the previous week. The prices in the Nordic countries continued to stand out, this time with a drop of almost 9% for both the ICE market and the NASDAQ market. The declines of between 3.5% and 1.5% in the markets of Great Britain, Italy, the Netherlands and Belgium were also noteworthy. The exception was the French market, which increased 0.6% compared to the previous week. In Germany, Portugal and Spain the variation was between ‑0.9% and ‑0.4%.

In the case of the futures prices for the 2021 calendar year, a general fall was also observed. The drop in this product was also led by the markets of the Nordic countries with a variation of ‑7.4% in the ICE market and ‑7.3% in the NASDAQ market. The EEX market of Spain and the OMIP market of Spain and Portugal continued to be the ones with the lowest variation at the end of last week, compared to Friday, January 17. In the rest of the markets the decrease was between 3.4% and 4.6%.

The declines registered during the past week are mainly related to the coronavirus that is affecting China and the confinement measures taken to try to contain it. The fears that a possible expansion of the coronavirus will cause a further decline in demand may favour that the downward trend in prices continues in the coming days.

The TTF gas futures in the ICE market for the month of February 2020 had settlement prices below €11/MWh every day of last week. The last days of the week the price remained stable, ranging from €10.45/MWh of Wednesday and Friday and €10.43/MWh of Thursday, January 23, which was the lowest settlement price of the week and the last two years.

The API 2 coal futures in the ICE market for the month of February 2020 began last week registering a settlement price for January 20 of $49.10/t, the lowest of the last two years. The rest of the week the prices remained below $50/t, except on Thursday, January 23, when the highest settlement price of the week was registered, of $50.25/t.

The CO2 emission rights futures in the EEX market for the December 2020 reference contract on Monday, January 20, reached a settlement price of €25.18/t, which is the second highest value so far this year, after €25.44/t of Friday of the previous week. But the downward trend of the last days of last week resulted in the settlement price of Friday, January 24, being €24.39/t. This value is 4.1% lower than the one of Friday of the previous week and the lowest registered since January 14, when a settlement price of €23.84/t was reached, the lowest of the last two months. The proximity of Brexit, planned for the end of this week, may favour that the price declines continue in the coming days. 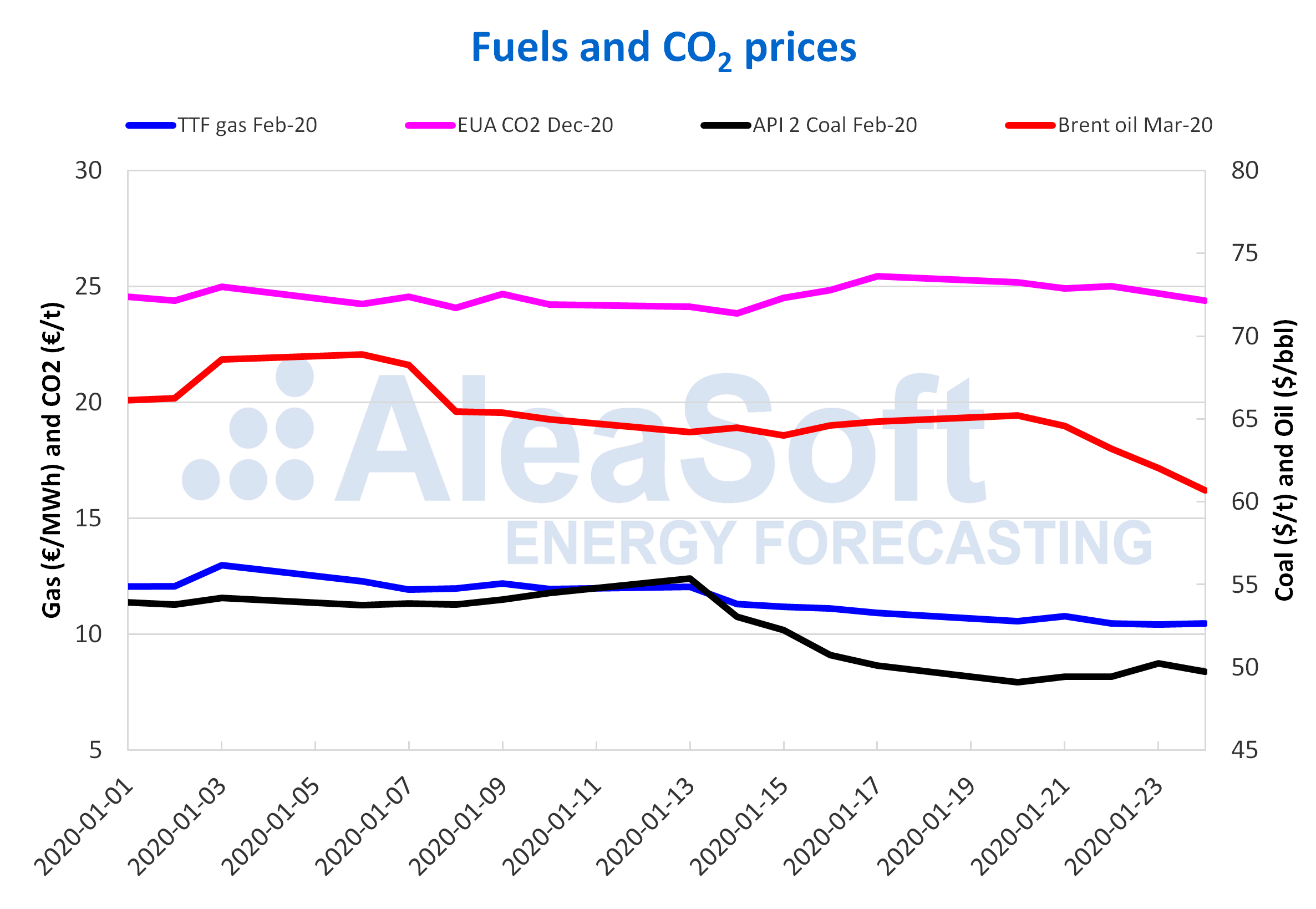