AleaSoft, August 5, 2021. News published by the Portuguese newspaper Jornal de Negócios with information provided by AleaSoft. It’s record after record. The wholesale electricity market had the month with the highest average price last July and, in early August, two peaks marked two of the highest daily prices in history.

Prices in the wholesale electricity market, that is, in which retailers buy the energy they sell to consumers, ended July with the highest average value in history. It was in the same month that the highest daily value was also registered. August started with the second and third highest values in the history of the Iberian market.

MIBEL, the Iberian electricity market, ended July with an average price of 92.60 Euros per megawatt‑hour (MWh) in Portugal and of €92.42/MWh in Spain, “the highest monthly price in history up to the moment”, informs AleaSoft, a Spanish company dedicated to data analysis and energy market forecasting. The day with the highest average price in history was July 21, when €106.57/MWh was reached. August 3 was the day with the second highest price in history, with €106.27/MWh, and on August 4 it registered €105.24/MWh, completing the podium.

“It is expected that the prices of the Iberian market MIBEL will continue high until the end of 2021 and that the yearly average will be above the current historical maximums, reached in 2008, of €69.98/MWh in Portugal and €64.63/MWh in Spain.”, predicts the same data analysis and forecasting company.

MIBEL market prices are among the highest in Europe

“The prices of the Iberian market MIBEL are among the highest in Europe”, they point from AleaSoft. The monthly price of July was also the highest in history in the Italian (IPEX), British (N2EX) and the Netherlands (EPEX SPOT) markets. The first two, of the United Kingdom and Italy, are, in that order, the highest in Europe “because of having a high production with gas”. This is also a characteristic of the Iberian market, therefore more expensive than the French, rich in nuclear energy, or the Nordic countries, which have high hydroelectric energy production, explained from AleaSoft. “In addition, the interconnection level of the Iberian market continues to be low, which also favours higher prices”, adds the consultancy. 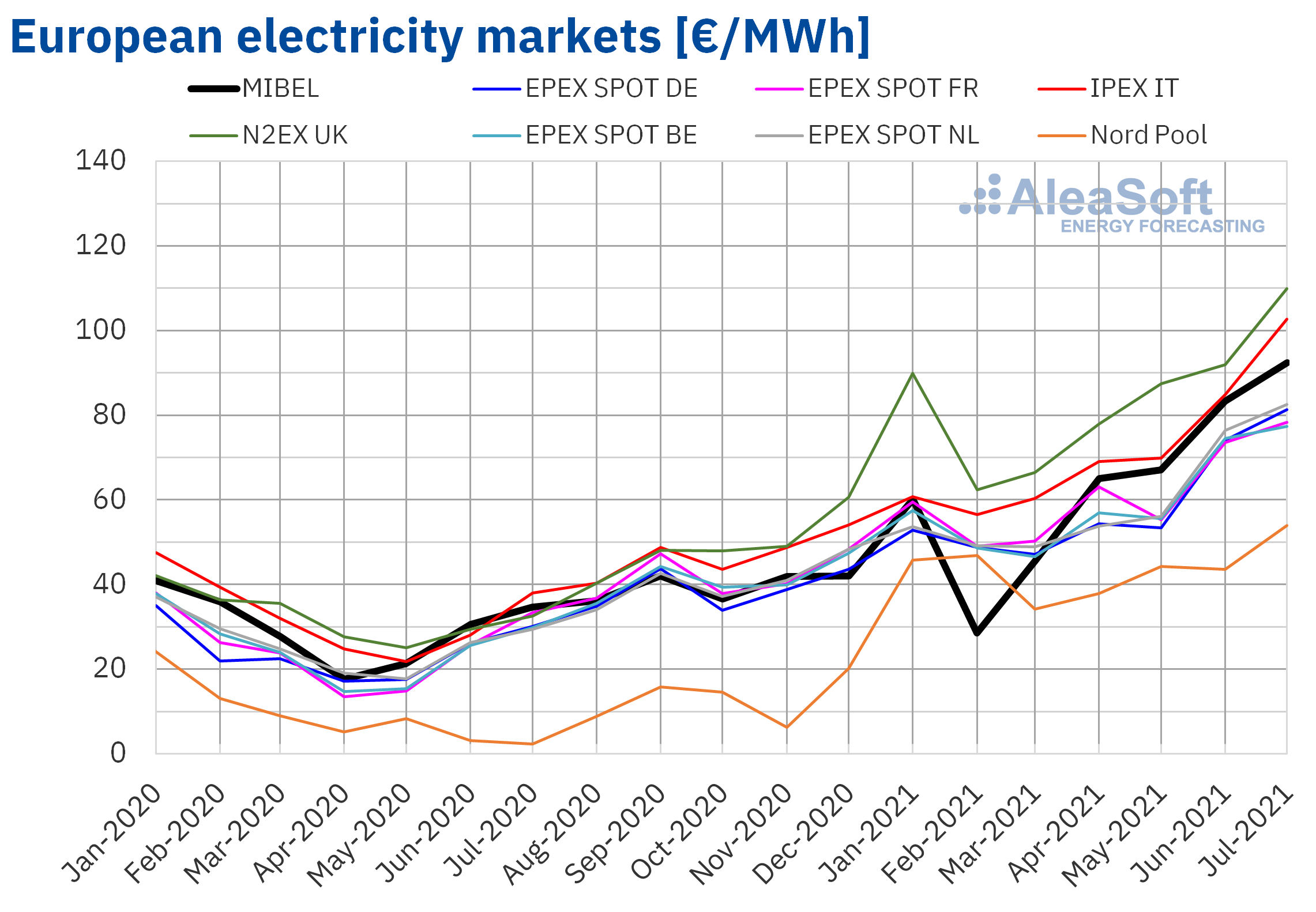 Several European countries already approached the European Commission (EC) with the request that it adapt its energy markets and opt for capacity markets, that is, those that allow maintaining the energy reserves to face shortages, thus controlling price rises. The news comes from El Economista, which points to Germany, France, Italy, Belgium, Ireland, Poland, Bulgaria and Lithuania as the countries that are exerting this pressure on Brussels. The Financial Times reports that the Spanish Minister for the Ecological Transition, Teresa Ribera, also called on Brussels to implement measures at the European level to counteract the rise in electricity prices, changing the way they are defined. The minister’s idea is that Brussels imposes a ceiling on prices, instead of relying solely on the market dynamics.

Currently, energy prices are defined based on the purchases made by the retailers, who can purchase it in a daily auction, the so‑called “spot market”. In this context, the price is determined by the lowest sale offer that allows satisfying the electricity demand. However, at present, the demand is satisfied with more expensive technologies, such as thermal power plants, whose prices are reflecting an increase in costs that these have with the CO2 emission rights and the natural gas. Gas prices are at all‑time highs due to the high global demand, and the carbon dioxide emission rights price has also skyrocketed this year, and the EC is preparing legislation that will increase the demand in this market.

“It is necessary a price that covers the costs but is fair to consumers”, defends Ribera. At AleaSoft, “a large part” of the price increase is attributed to the “existing speculation” and it is seen as a hypothesis to control the prices that the European Commission decides to make use of the market stability reserve (MSR). “These price increases are very negative for large and electro‑intensive consumers for whom electricity represents one of the highest costs in the production”, is pointed from AleaSoft, as one of the consequences of the “heating” of the wholesale market. This puts them at a disadvantage compared to their competitors of other areas with lower price levels and makes their recovery from the economic crisis that the COVID‑19 pandemic caused more complicated, concludes the same source.

PrevAnteriorFirst half of 2021: period of high prices in the MIBEL market of Spain
SiguientePrices from negative to almost €100/MWh in the first half of 2021 of the German electricity marketNext
Menu
Facebook-f Twitter Linkedin Instagram