AleaSoft, August 6, 2021. The high fuels and CO2 emission rights prices led to a rise in prices in the European electricity markets during the first half of 2021. For the German market, where the coal energy generation remains high despite its large renewable energy penetration, this meant reaching the highest half‑year price since 2008.

The first half of 2021 was a records season in the European electricity markets and Germany was no exception. During this period, the electricity prices in the German EPEX SPOT market were around €55/MWh with a deviation of approximately €23/MWh. These values are relatively high figures for the usual price levels at that time of year, which in the last eight years fluctuated around €33/MWh. In fact, the monthly average price for the month of June 2021, of €74.08/MWh, was at the end of that month the highest in this market since October 2008. 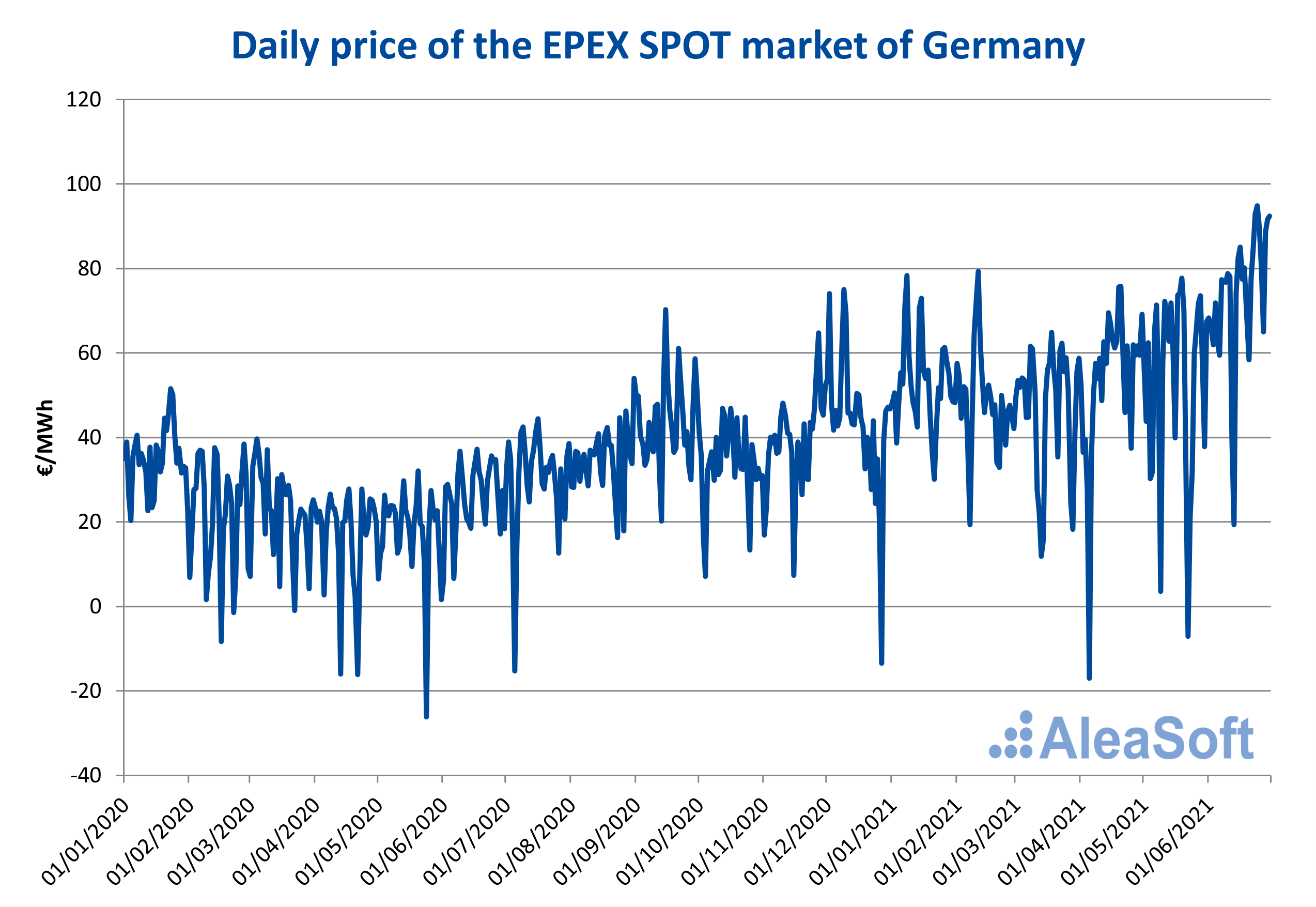 The highest daily price in the first half of 2021 was reached on June 24, with €94.83/MWh. At the time, this value was the highest price in the last four years. This price record, like the others registered in the rest of the European markets, was mainly due to the rise in fuels and CO2 emission rights prices.

On the other hand, on April 5 was registered the lowest price in the first six months of 2021, having a daily average of ‑€16.99/MWh. One of the main reasons for this low price was that this day was Easter Monday and consequently the demand fell considerably, which together with an abundant renewable energy production, mainly wind energy, produced the low market prices.

In general, the prices for the first half of 2021 were high, averaging €54.96/MWh. Since the second half of 2008 there wasn’t a value higher than this, which represents an increase of 47% compared to the previous six months and 135% compared to the same period in 2020.

During the week of February 8, there was an increase in demand due to a strong cold snap in Germany. In the rest of the first half of 2021, the electricity demand values were the usual for this time of year. 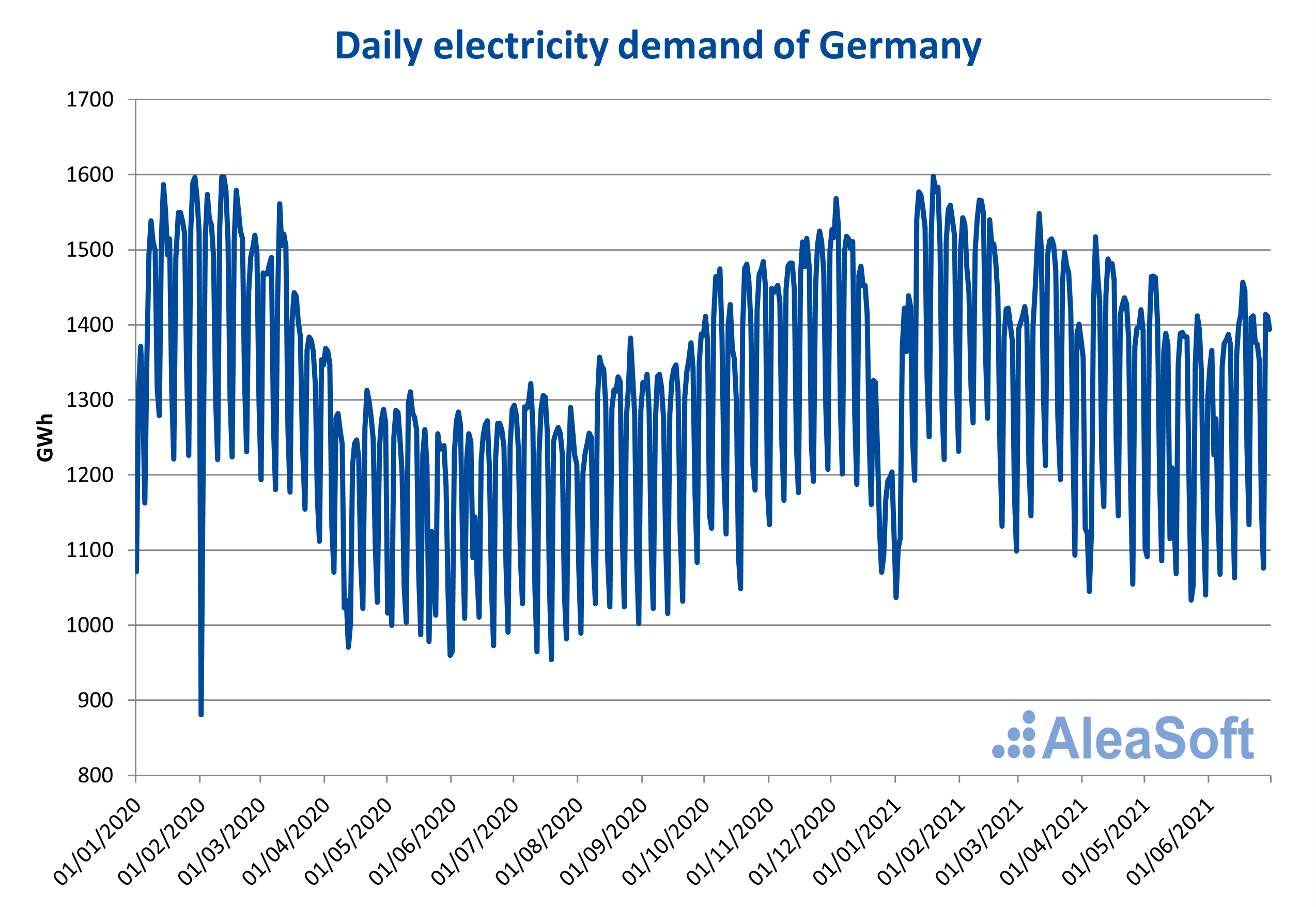 When analysing the behaviour of the German electricity demand in the first half of 2021, their differences with respect to the previous six months and the same semester of 2020 are 3.1% and 4.1% respectively. However, if this analysis is carried out between quarters, greater differences are appreciated. The second quarter of 2021 registered an increase of 11% compared to the demand of the second quarter of 2020. In year‑on‑year terms, the demand for the first quarter of 2021 represented a decrease of 1.6%. In the case of Germany, the demand for the first quarter of 2020 was not greatly affected by the COVID‑19 pandemic, because the closure of shops began to be adopted from March 22 and at that time the measures in Germany were not as drastic as in other regions of the continent.

Germany is one of the countries that lead the development of the renewable energies in the European Union. Currently, more than 60% of its electricity generation capacity comes from renewable sources, led by onshore wind and solar photovoltaic, with more than 54 GW and 51 GW installed, respectively. According to Germany’s landmark Renewable Energy Act (EEG), the goal is to increase this capacity by 2030 to 100 GW in the case of photovoltaic energy and 71 GW in the case of wind energy. It is also intended to increase the installed offshore wind capacity from the current 7.8 GW to 20 GW. To achieve these objectives, annual renewable auctions are planned until 2028, where each year between 3.0 and 5.8 GW of onshore wind energy will be tendered, between 1.9 and 6.0 GW of solar photovoltaic energy, in addition to capacity of other renewable technologies.

The wind energy was the renewable technology with the highest contribution in the mix, with 23%, and the second if all technologies are taken into account. However, wind energy production fell in the first six months of 2021 by 20% in year‑on‑year terms. With respect to the second quarter of 2020, production with this technology increased by 2.1%.

The solar photovoltaic energy production increased compared to the first and second half of 2021, by 0.4% and 21% respectively, and in total it contributed 10% of the total electricity generated in the first half of 2021. 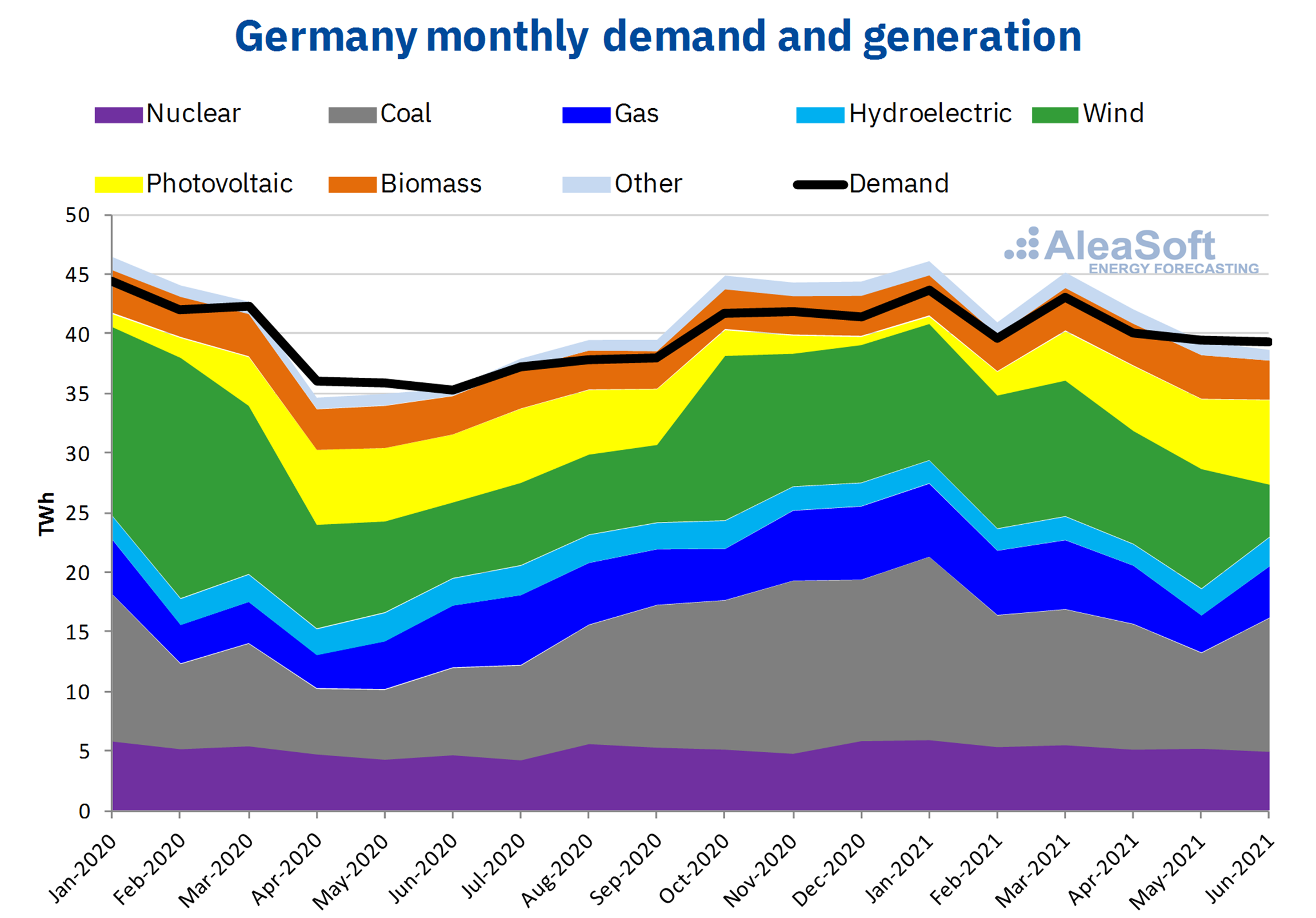 However, in the first half of 2021, coal was the technology with the highest contribution to the German mix, with 27%. Production with this technology increased in this period by 45% in year‑on‑year terms and fell by 4.1% compared to the second quarter of 2020. The installed capacity of this technology is still high, of 44%, and its definitive disappearance from the mix is scheduled for 2038.

The third technology in terms of contribution to the mix during the first half of 2021 was the nuclear energy, with 13%. Production with this technology increased 6.6% compared to the first half of 2021 and 3.8% compared to the second half of the same year. The nuclear blackout in Germany is scheduled for 2023, but currently its installed capacity is 8.1 GW. 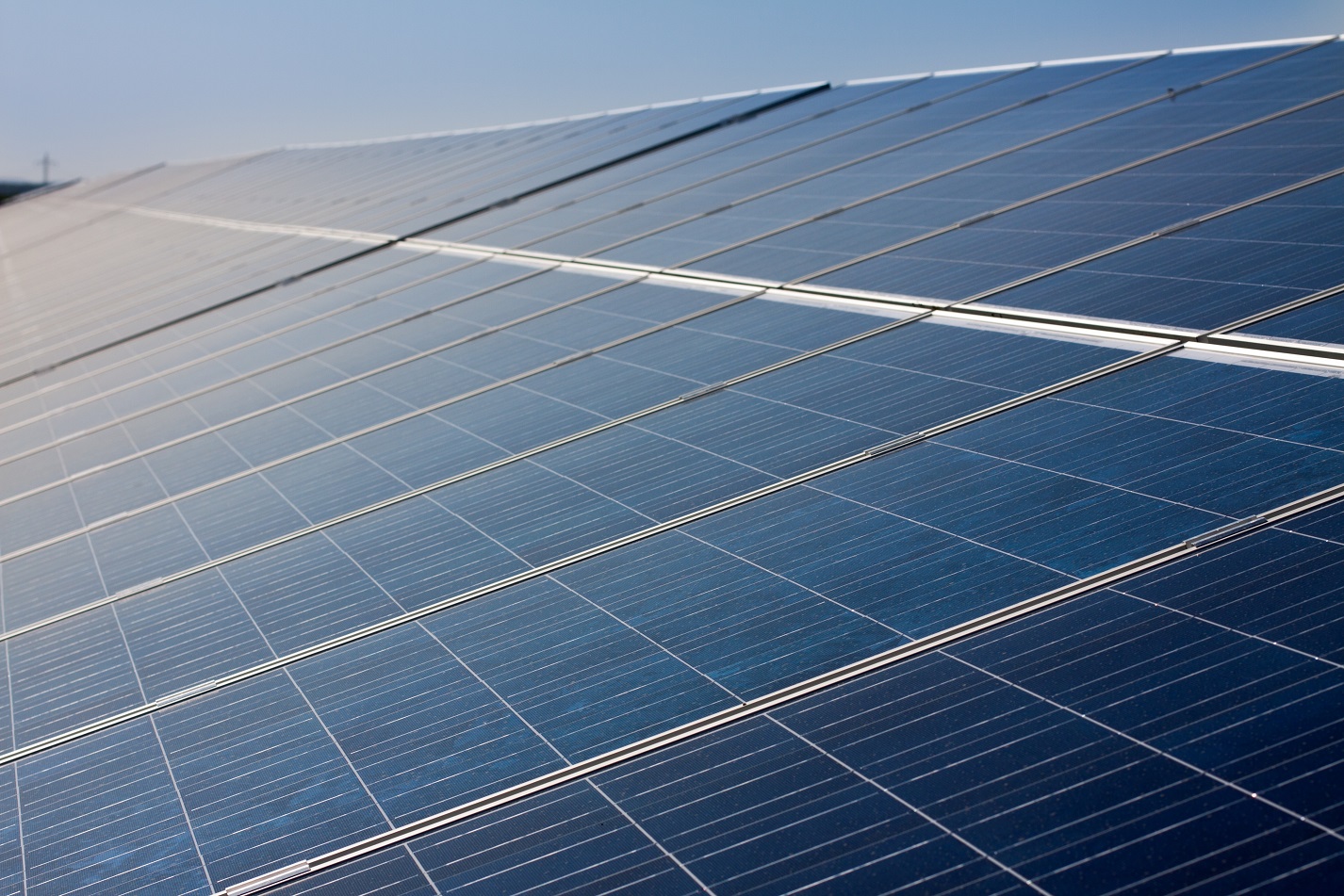 The production with gas also registered a significant increase in year-on-year terms in the first half of the year, of 27%, although it fell 7.5% compared to the previous six months. This technology was the fourth in terms of contribution to the mix, with 12%. 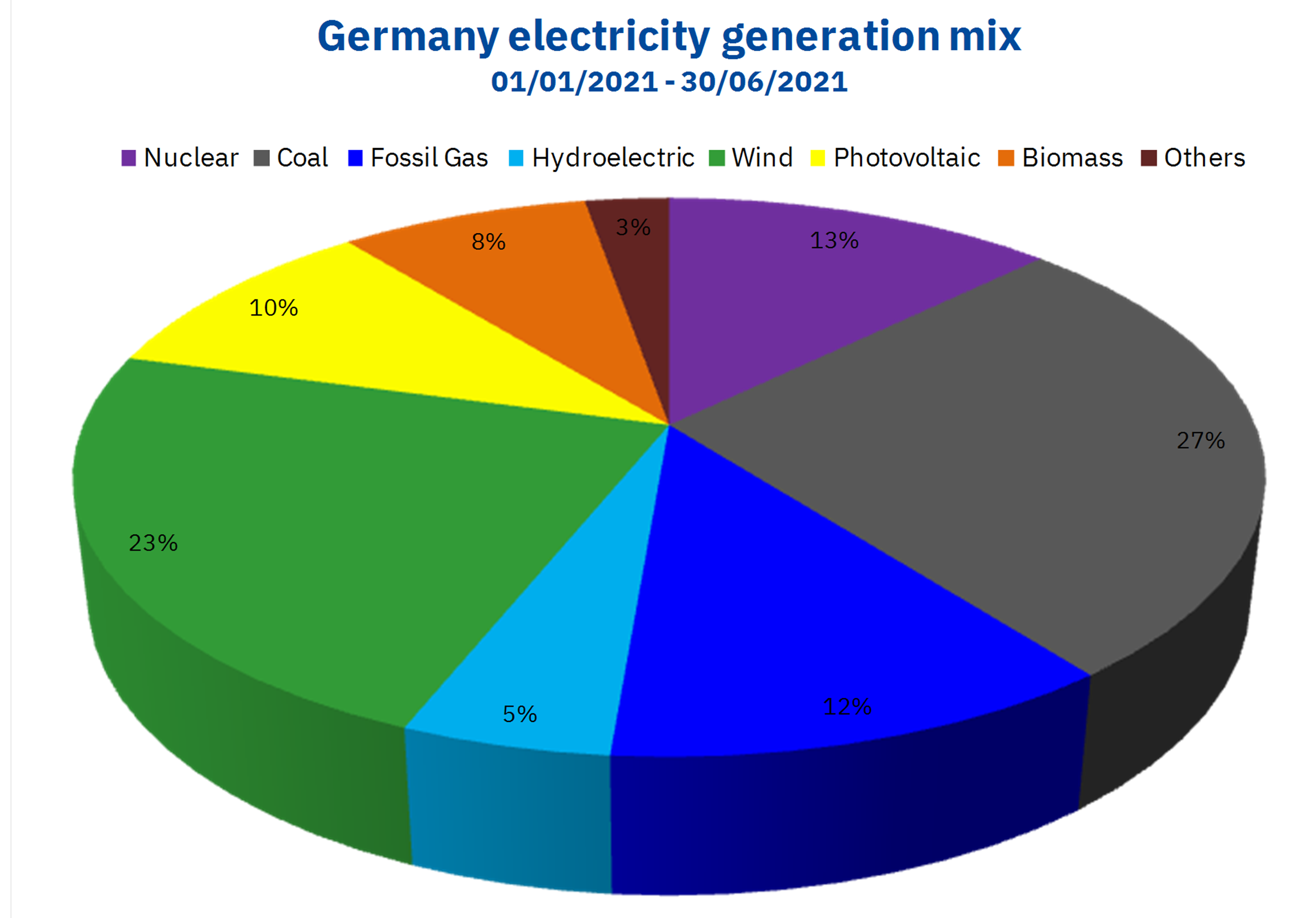 The electricity futures prices corresponding to the next calendar year 2022 had an upward trend during the first half of 2021. The difference between the first and last sessions of this period shows an increase of 45%. In absolute terms, this growth represented an increase of €22.40/MWh. 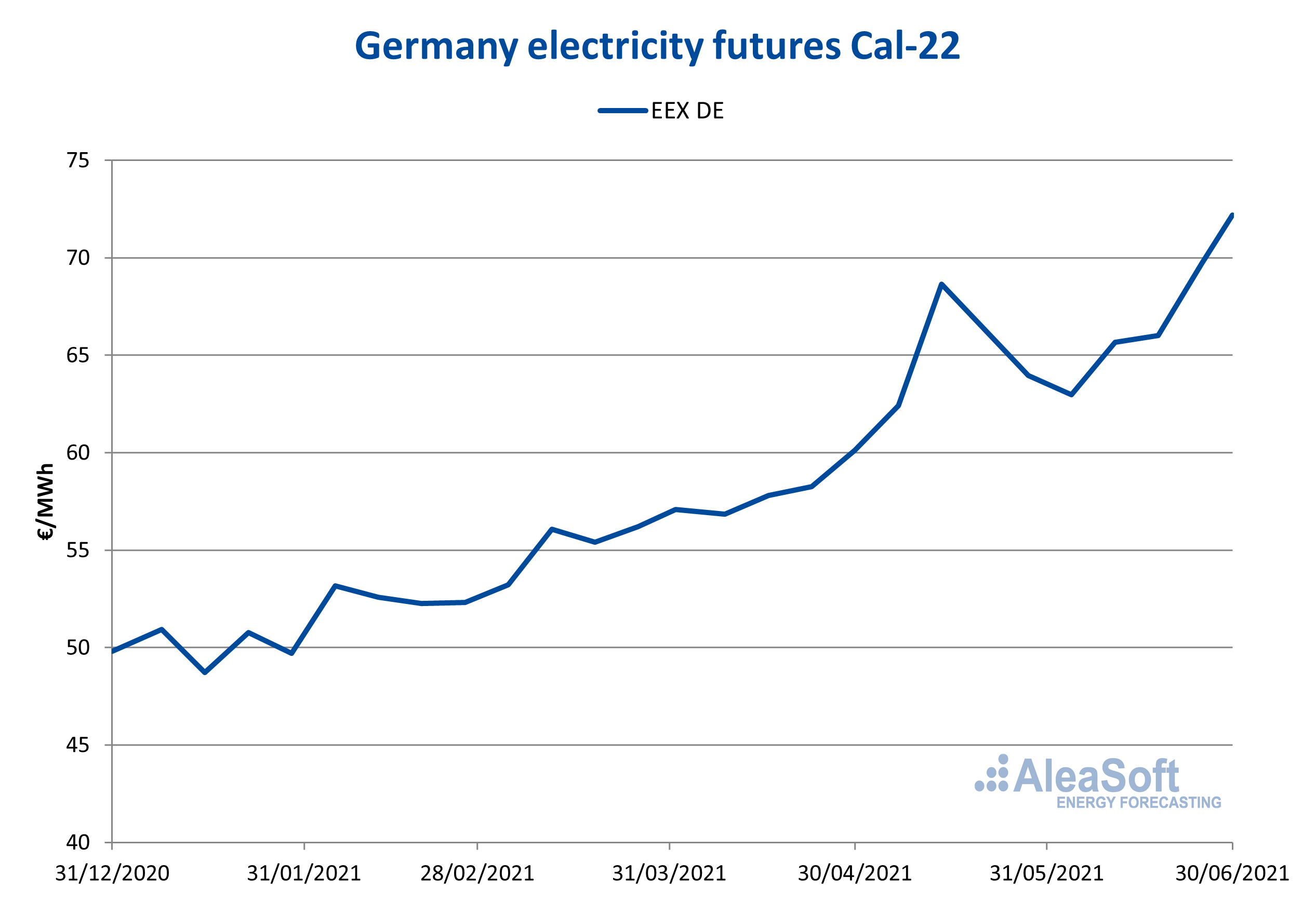 Germany is a predominantly electricity exporting country, a trend that continued in the first half of 2021. If scheduled trade exchanges are taken into account, in the first six months of the year as a whole Germany exported 15% more than in the same period of 2020, although when making the comparison with the second half of 2020, there was a decrease of 27%. 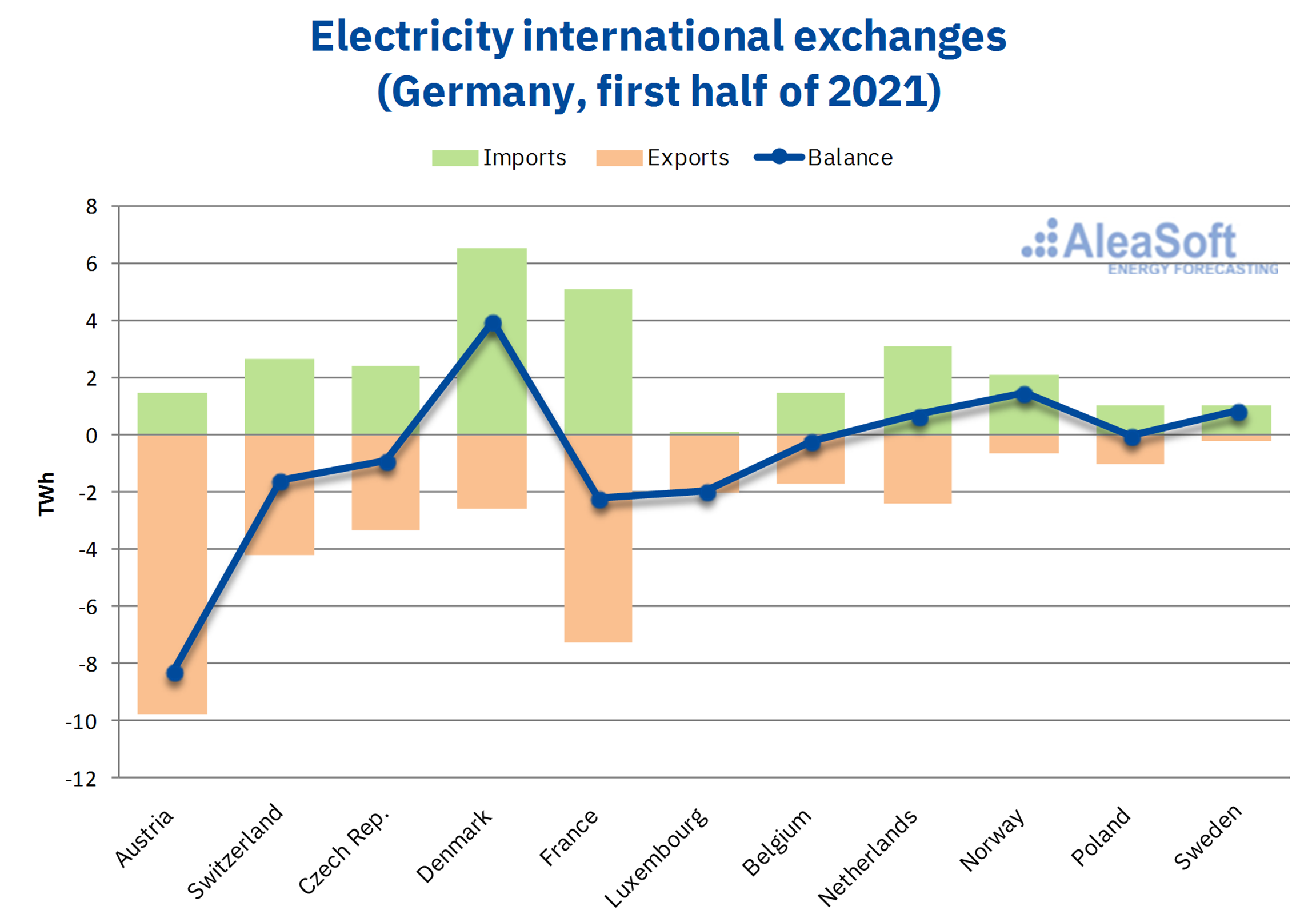 AleaSoft’s analysis on the prospects for the German market

The EPEX SPOT market in Germany registered prices in the first half of 2021 that constitute records in recent years. But the current situation of high prices does not necessarily set the long‑term market trend. AleaSoft is doing a special promotion of the long‑term price forecasting reports of the European electricity markets in general, and specifically the German market. These forecasts are made using artificial intelligence techniques as a principle, which gives them a scientific basis that has shown positive results for more than 20 years working for the main companies in the energy sector.

On October 7, 2021, a webinar to analyse the evolution of the energy markets after the economic crisis one year later will take place. This webinar will feature speakers from Deloitte and AleaSoft. Among other topics to be discussed will be the prospects for financing renewable energy projects and the importance of forecasting in audits and portfolio valuation.