MIBEL does not resist the high temperatures, most of Europe is saved by renewable energies

AleaSoft, June 27, 2019. In the electricity market MIBEL, the average price of the week increased compared to the same days of last week, favoured by a decrease in renewable energy production in a context of rising temperatures which increases the demand for electricity. However, in other markets of the continent the prices resisted the increase in demand thanks to the increase in production with renewable energies.

During the first four days of this week of June 24, the average price of the MIBEL electricity market of Spain and Portugal was 48.87 €/MWh, standing at 3.2% above the average price for the first four days from last week. In Spain the wind and solar energy productions decreased so far this week with respect to the average of the last week, 1.1% and 3.8% respectively. This caused the prices to increase in the current scenario of increase in electricity demand, of 2.3% in the first three days of this week compared to the same days of last week, due to the increase in temperatures in this period, of around 2 °C.

In the electricity markets IPEX of Italy and N2EX of Great Britain, the average price between June 24 and 27 also increased compared to the first four days of last week, by 2.0% and 8.0% respectively.

However, at least for the moment, the increase in electricity demand due to the increase in temperatures this week did not affect all European markets equally. In the rest of the analysed markets, the average price of the first four days of this week decreased, between 0.3% in the Nord Pool market of the Nordic countries, and 8.3% in the EPEX SPOT market of France.

There was a strong increase in the renewable energy production in several countries in Europe, both wind and solar energy. When comparing the average production of the first three days of this week with the average production of last week, the growths of wind energy stand out in Italy, of 167%, although in this case it did not translate into a decrease of the market prices, in Germany, of 106% and in France, of 43%. 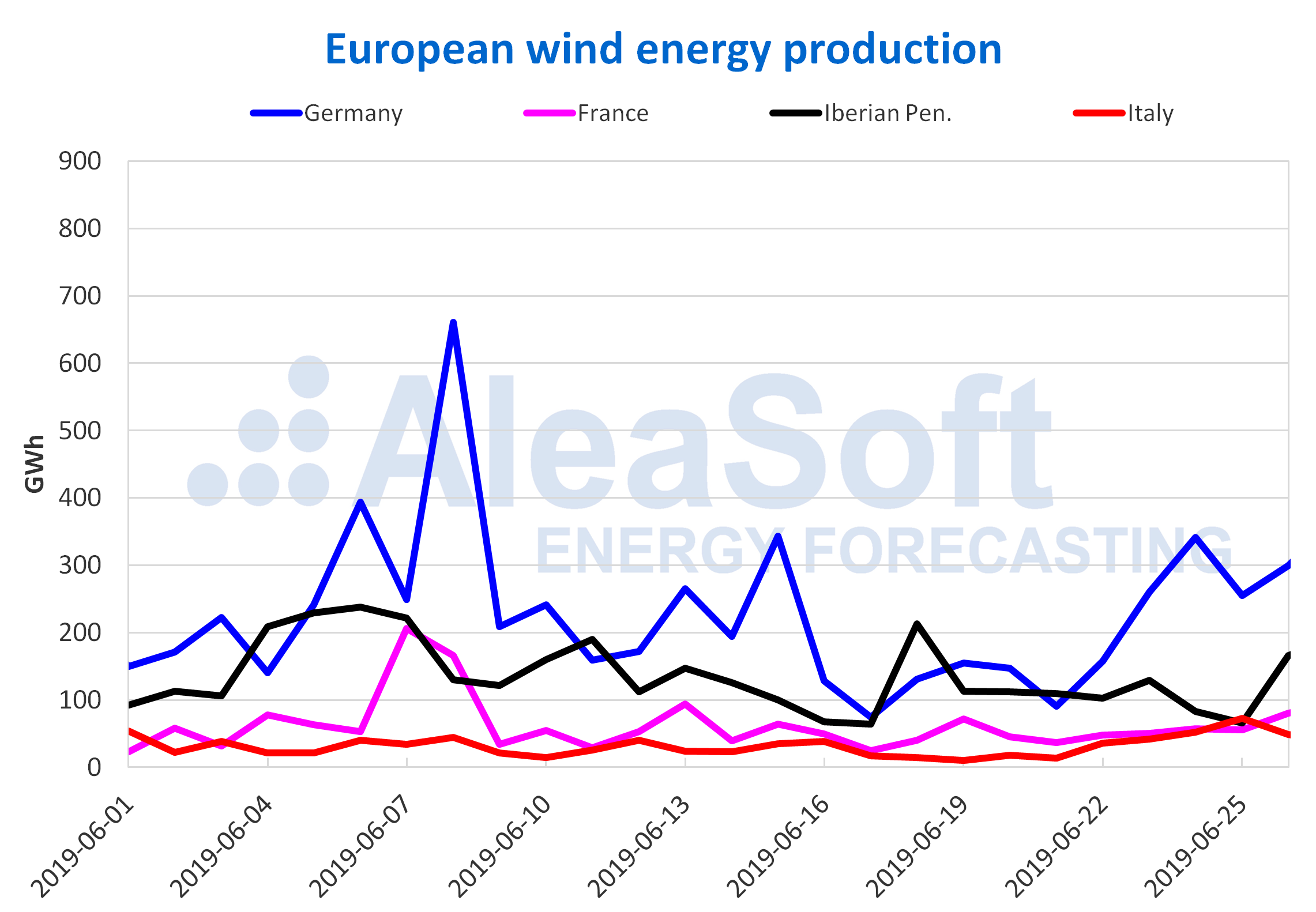 In the case of solar energy, in Germany it increased by 18% in the analysed period and in Italy by 6.7%. 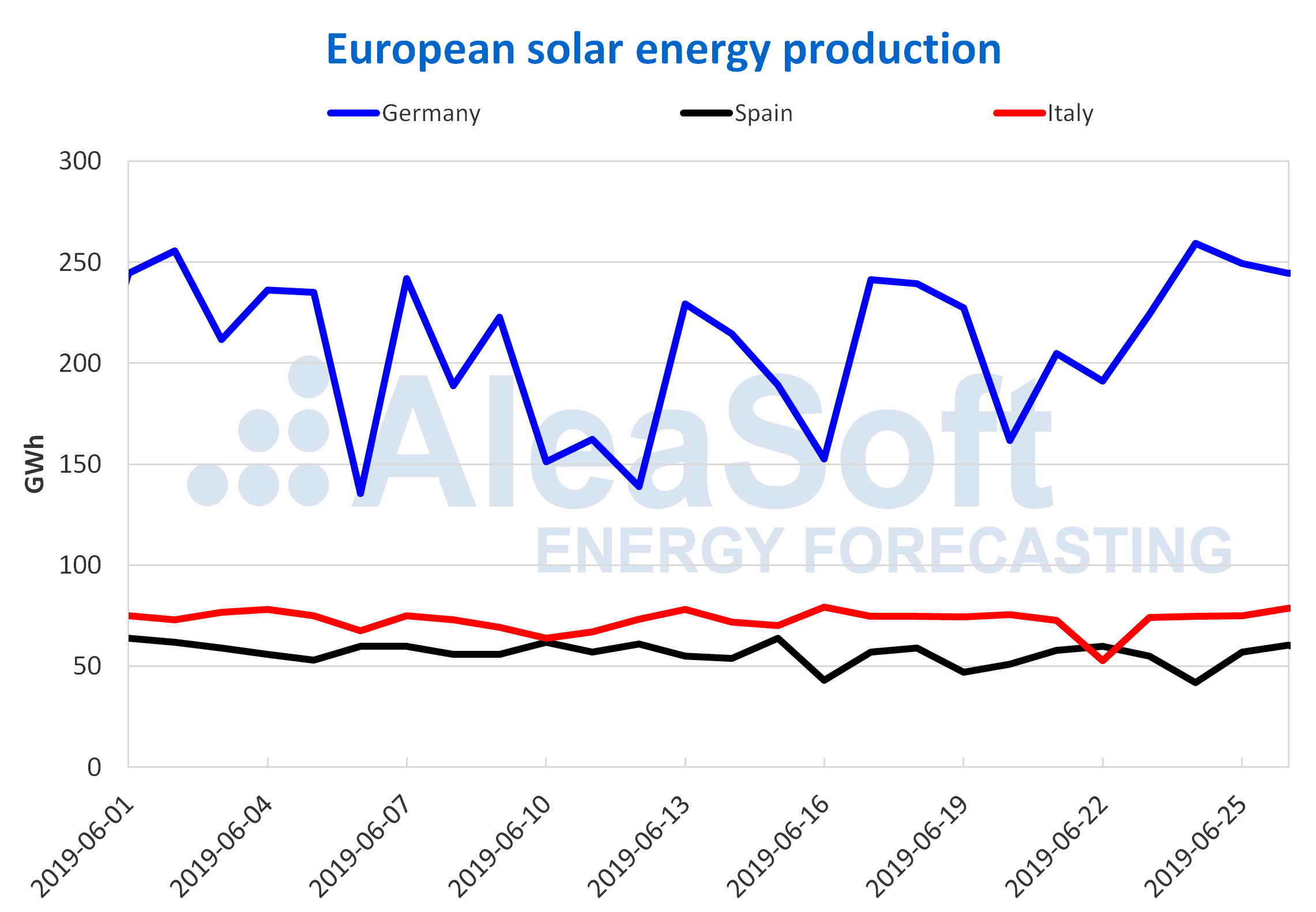 The main European electricity markets remain divided in two groups according to their price. In the group of markets with higher prices, which this week covered a wider range, between 45 €/MWh and 65 €/MWh, are the markets MIBEL, N2EX, which was the one with the highest price the first two days of this week, and IPEX, which in the last two days took over as the one with the highest price. In the group of markets with lower prices, this week there are two subgroups: a subgroup with prices around 30 €/MWh in which are the Nord Pool market and the EPEX SPOT of France, and another subgroup with prices between 35 €/MWh and 40 €/MWh that includes the EPEX SPOT markets of Germany, Belgium and the Netherlands. 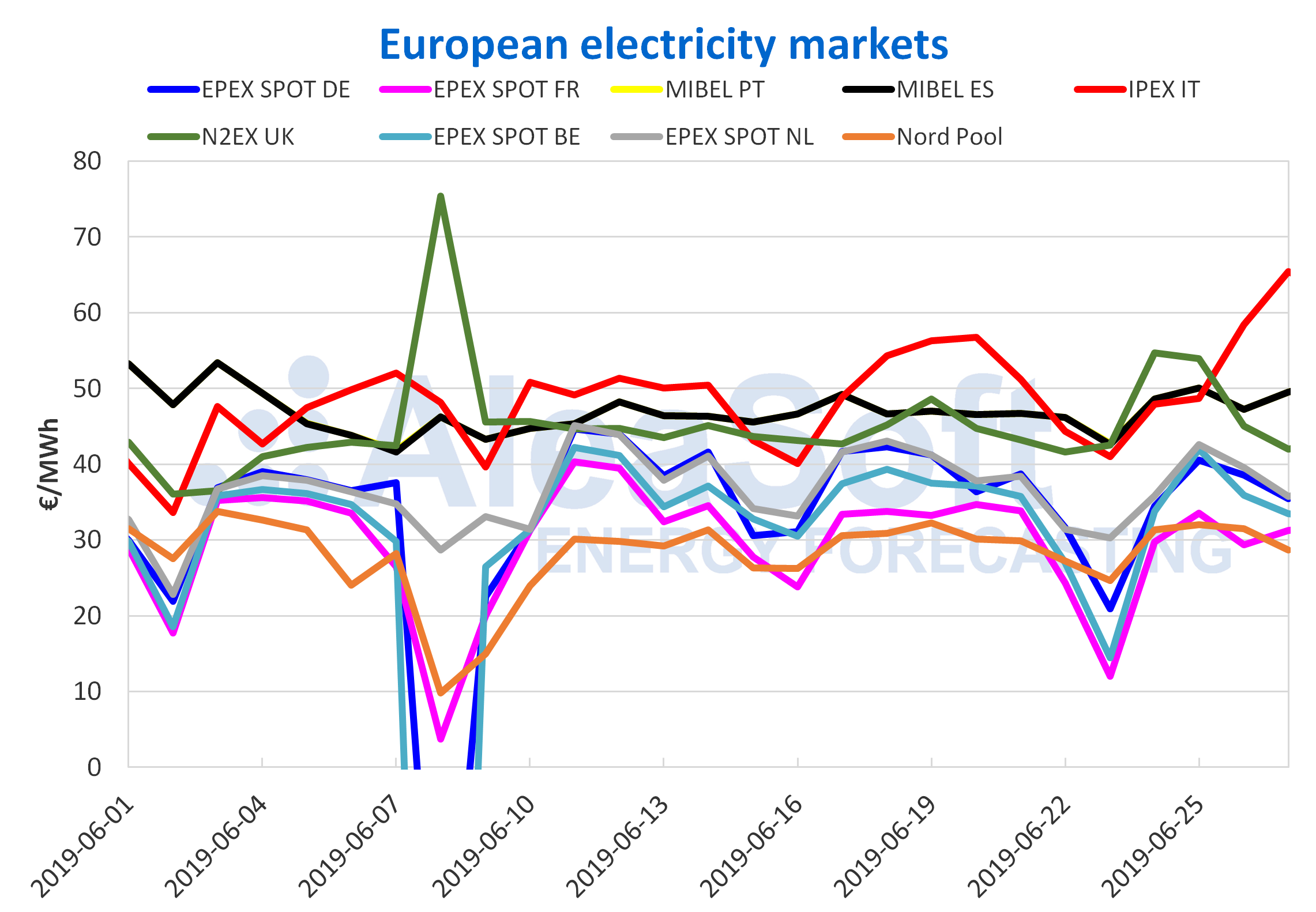 The Brent oil futures prices for the month of August in the ICE market started a recovery since the end of last week, reaching a maximum value in almost four weeks of 66.49 $/bbl, 11% above the price of June 12, the day of the lowest settling price for the month of August so far in June. This upward trend was mainly influenced by the tensions between the United States and Iran, which are awaiting new sanctions from the United States, and despite the commercial conflict between the United States and China, which this time had less weight. This weekend two important meetings are planned that can condition the future of this market in the coming days and months: the meeting of the OPEC countries, where it will be decided whether the oil production cuts will be maintained in the second half of the year and the meeting between the presidents of the United States and China in the framework of the G20 summit.

The futures of TTF gas in the ICE market for the month of July continue in declivity towards historical minimums of the last two years, settling this Wednesday, June 26, at 9,62 €/MWh, due to the wide offer and low demand of the market .

The API 2 coal prices futures in the ICE market for next July continue to fall, despite experiencing a small recovery at the end of last week and beginning of this week, influenced by the rise in temperatures due to the heat wave, positioning itself again below 50 $/t on Wednesday, June 26, with a settling price of 49.60 $/t and maintaining the historical minimum values of the last two years.

The CO2 emission rights futures prices in the EEX market for the reference contract of December 2019 started to rise since Monday of this week, reaching 27.72 €/t on Wednesday, June 26, due mainly to the increase in temperatures, which drives the production of electricity with generation sources that emit CO2. In addition, this market continues to be heavily influenced by uncertainties related to the Brexit negotiations.

Spain’s electricity futures in the OMIP and EEX markets, as well as those of Portugal in the OMIP market, for the third quarter of 2019 are following a growing trend this week, in parallel with the behaviour of the CO2 futures. This week it is above 50 €/MWh after falling below that value last week.

Futures for next year also show a growing trend. On Wednesday, June 26, they settled above 56 €/MWh in both markets, their highest values in four weeks.

The futures of France and Germany in the EEX market for the next quarter continued with a decreasing trend and settled on June 26 at 36.25 €/MWh and 38.4 €/MWh respectively. On the other hand, the futures for the next year of these two countries show a growing trend since the end of last week after having maintained a bearish trend since April. On Wednesday, futures in France stood at 52.09 €/MWh and those in Germany at 49.09 €/MWh, their highest values in more than five weeks.

The electricity demand increased during the first three days of this week by 2.3% compared to the same days of the previous week, maintaining a growth for the second consecutive week. The average temperatures rose around 2 ºC, contributing to this increase in demand. According to the analysis carried out at AleaSoft, if the labour effect of the Saint John’s holiday of June 24 is corrected, the increase was 3.6%. For the next week an increase in average temperatures is expected, which will lead to a new increase in electricity demand.

The average values of wind energy production decreased so far this week by 1.1% compared to the average of last week. For the next week a recovery of the production with this technology is expected.

The nuclear energy production this week was very similar to that of the previous week.

The hydroelectric energy production increased in the first days of this week, for the second consecutive week. This time the growth was 2.5%. 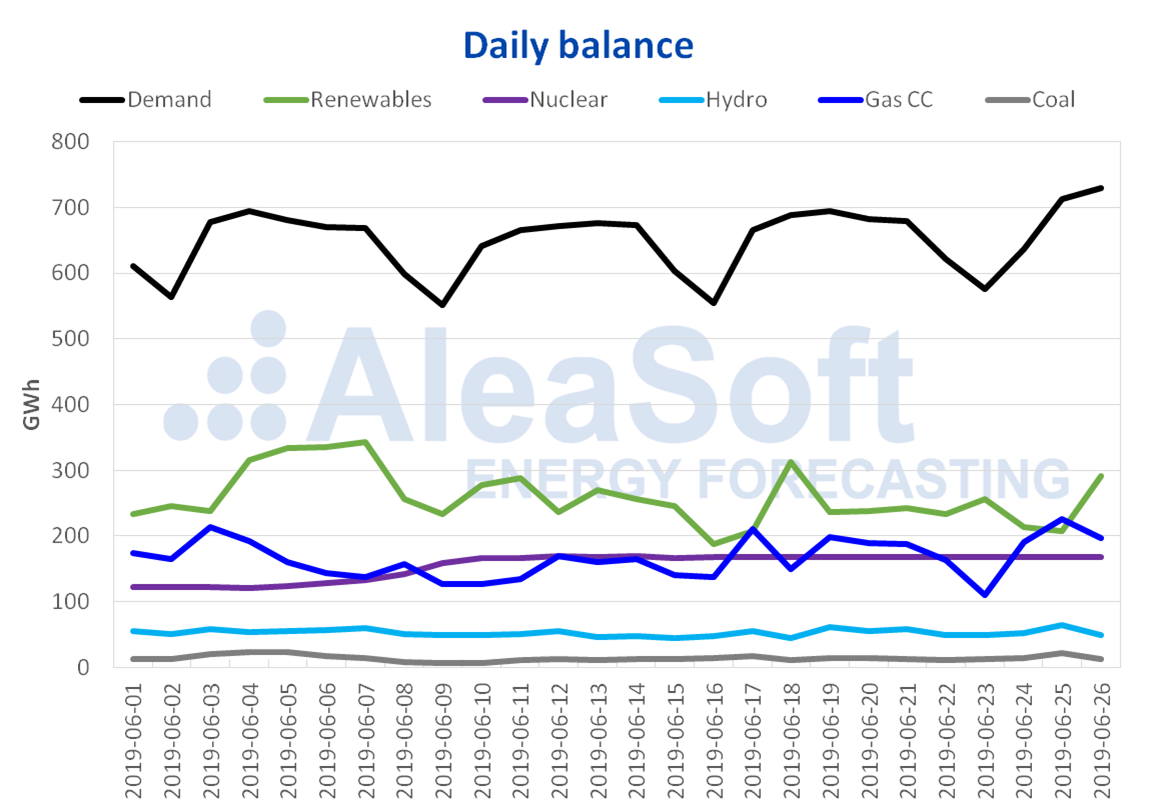 The hydroelectric reserves were reduced by 145 GWh compared to last week and currently accumulate a capacity of 12 044 GWh, which represents 52% of the total capacity, according to the Hydrological Bulletin of the Ministry for Ecological Transition.