AleaSoft, February 3, 2020. The European electricity markets prices fell in January compared to those of January 2019. The increase in demand, in solar energy production and, for some markets, in wind energy production, as well as the decrease in gas and coal prices, are the causes of this fall. The Brent oil prices fell due to the drop in demand caused by the coronavirus. This week the electricity markets prices will raise compared to those of last week, although the weekly average will not exceed €40/MWh.

The solar energy generation of the German market in January began low in the first fortnight but recovered as the month progressed, reaching a year‑on‑year increase of 48%. On the contrary, in the market of Spain, after a very good first half, it was declining during the course of the month and was 8.2% above the production of January 2019. In the market of Portugal, the increase compared to the first month of 2019 was 8.4%. In year‑on‑year terms, the increase in production of the Italian market was 20% and in the French market it was 11%.

For this week, increases in solar energy production are expected in all markets, with significant increases in Germany towards the end of the week. 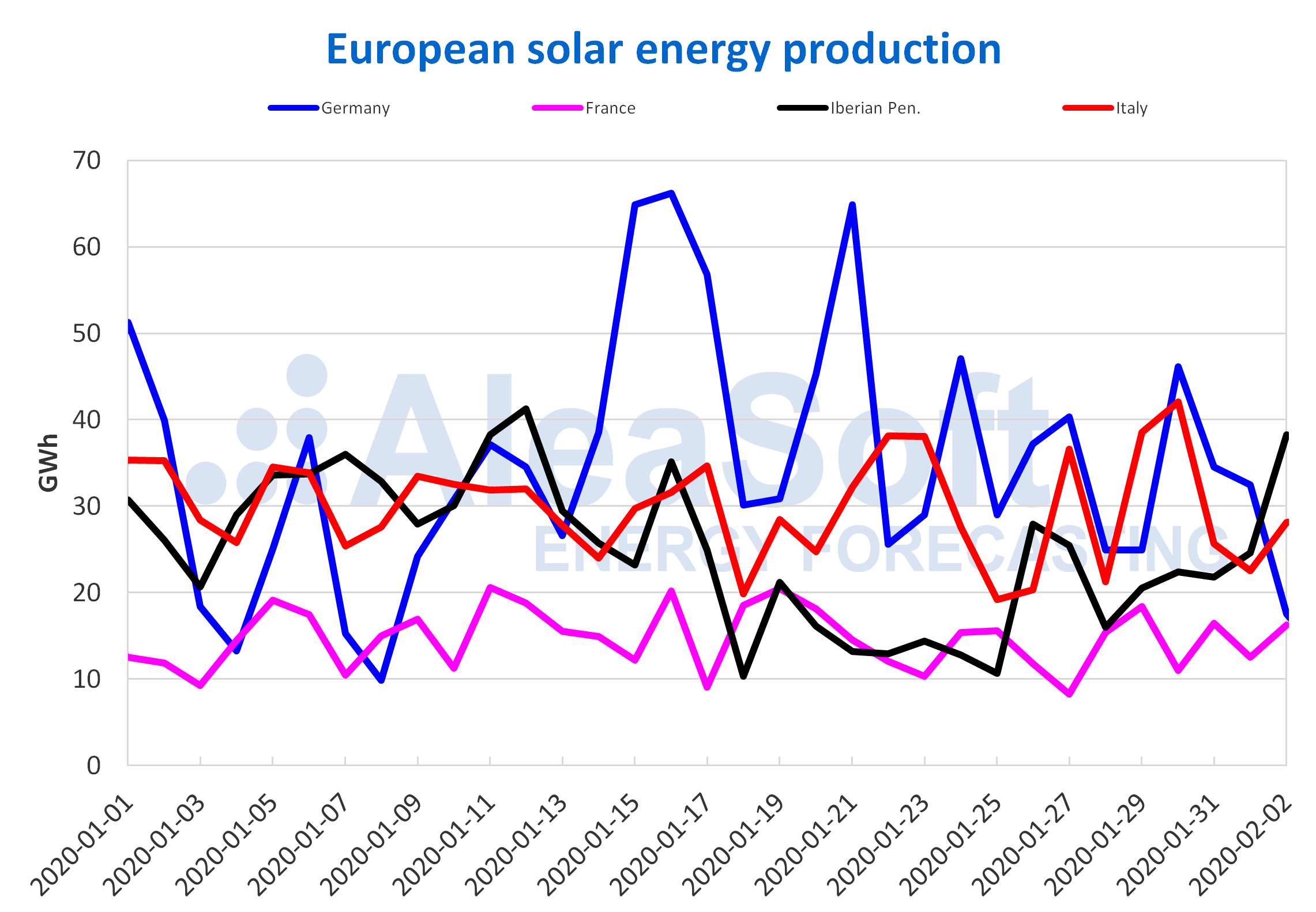 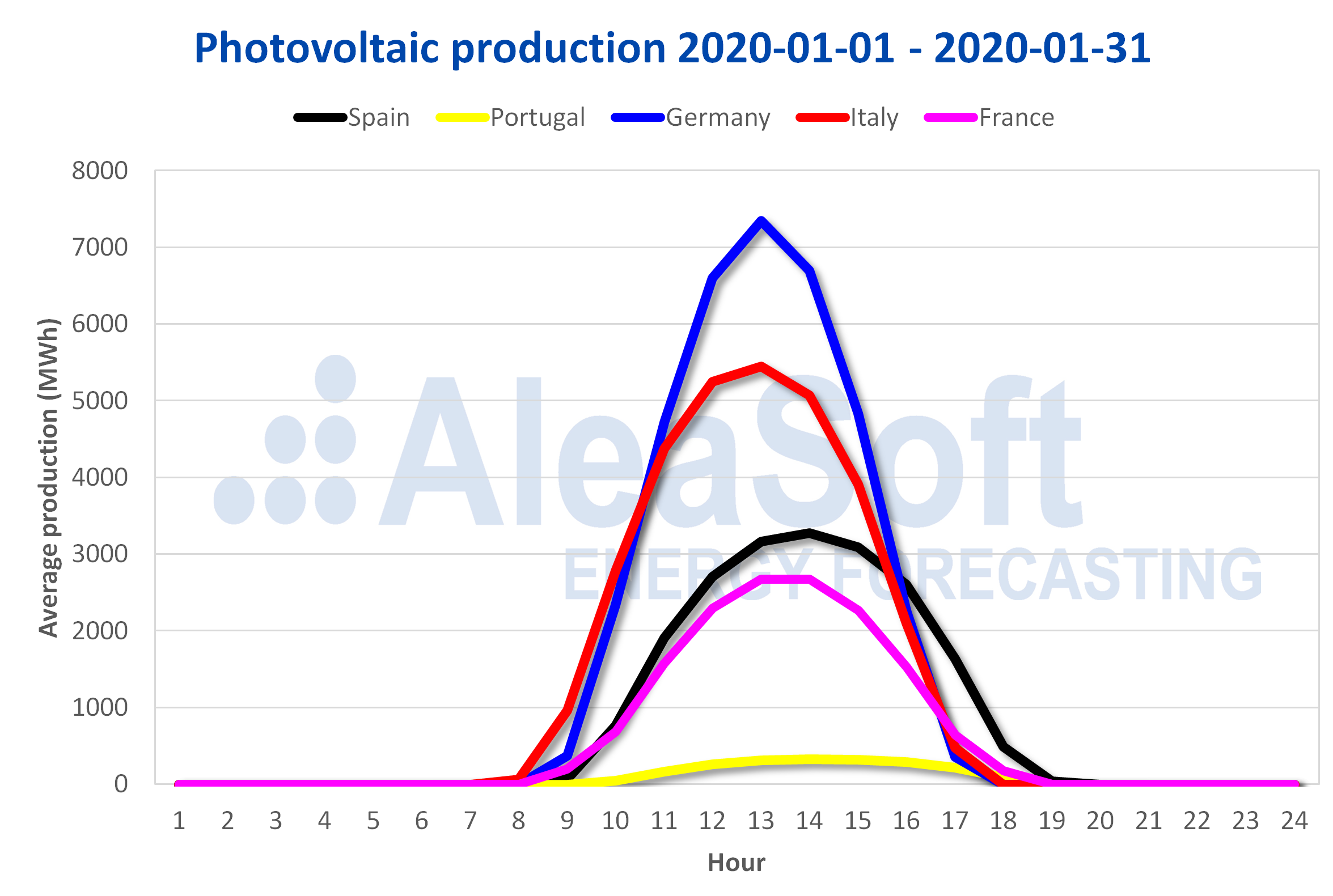 The wind energy production of the European markets in January had a heterogeneous behaviour in the year‑on‑year analysis. The greatest variations were the 38% increase in the French market and the 26% drop in the Italian one. The other market where the generation with this technology increased was the German, which registered a rise of 7.8%. In the Iberian Peninsula the descent was 19%.

For this week, wind energy production falls are expected in all European markets. In particular, the decrease is expected to be more noticeable as the week progresses. 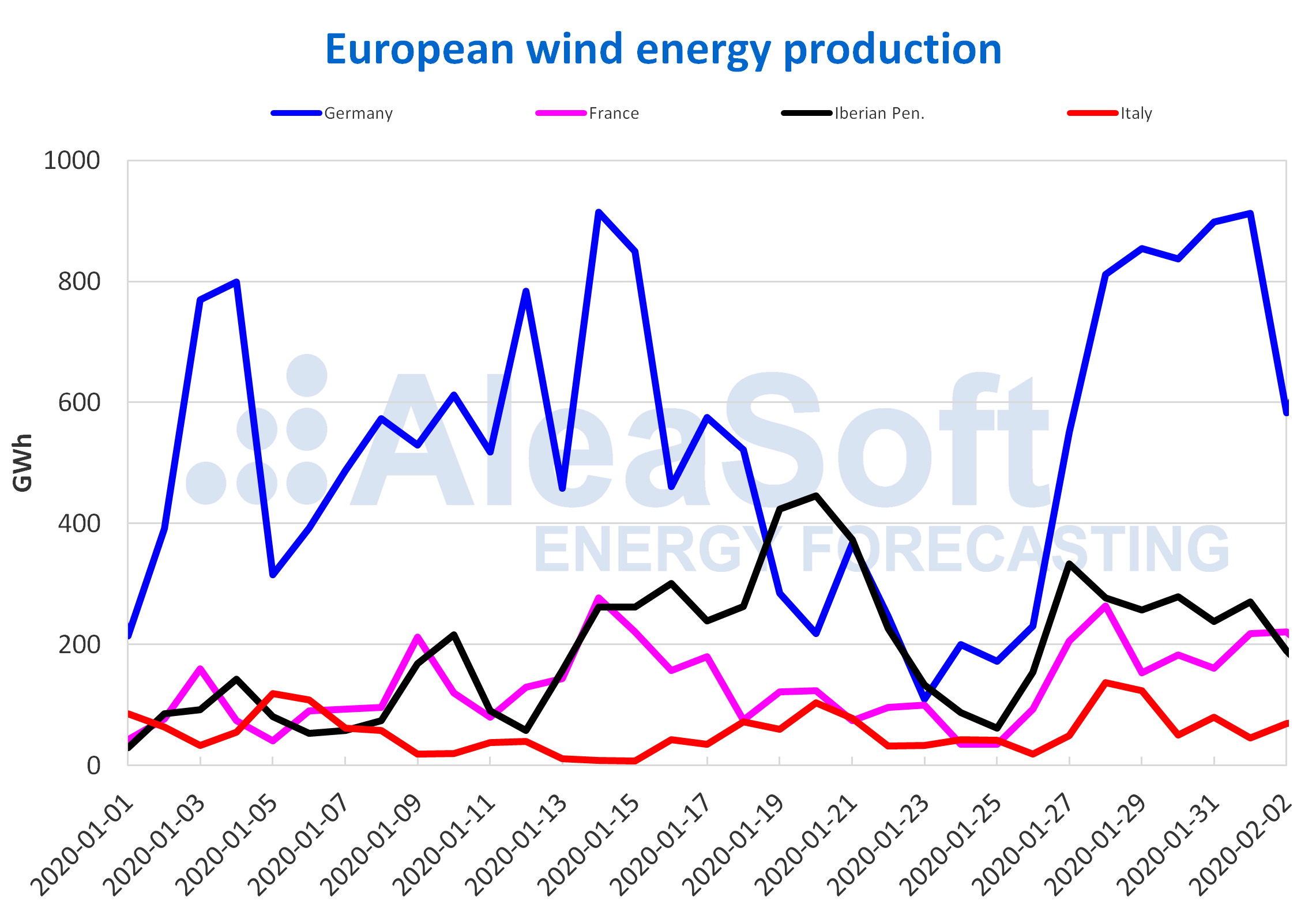 The Italian energy agency Gestore dei Servizi Energetici (GSE) announced on January 28 the results of the auction of contracts for difference (CFD) that launched in September 2019. The data indicate that only 1% was destined to solar energy, with 5.1 MW awarded to the Solar Italy IX project. The offer for this project was €60/MWh, about €10/MWh below the reference price. The 99% of the offered 500 MW was awarded to wind energy projects, whose capacities ranged from 9.4 MW to 84 MW. The promoters of these wind energy projects offered discounts between 4.2% and 31% of the maximum price of €70/MWh.

On the other hand, the Regulatory Authority for Energy (RAE) of Greece announced last Thursday, January 30, that it will hold a renewable capacity auction on April 2, 2020. According to the latest terms published for the tender, 500 MW will be tendered and the maximum bid price will be €61.32/MWh. The process is open to wind energy projects with more than 50 MW of capacity and to solar energy projects over 20 MW.

The electricity demand of most European electricity markets in the first month of this year was lower than that of the same month of last year, except in Portugal where it rose 1.5%. Last January the temperatures were less cold than those of January 2019, which led to increased demand. 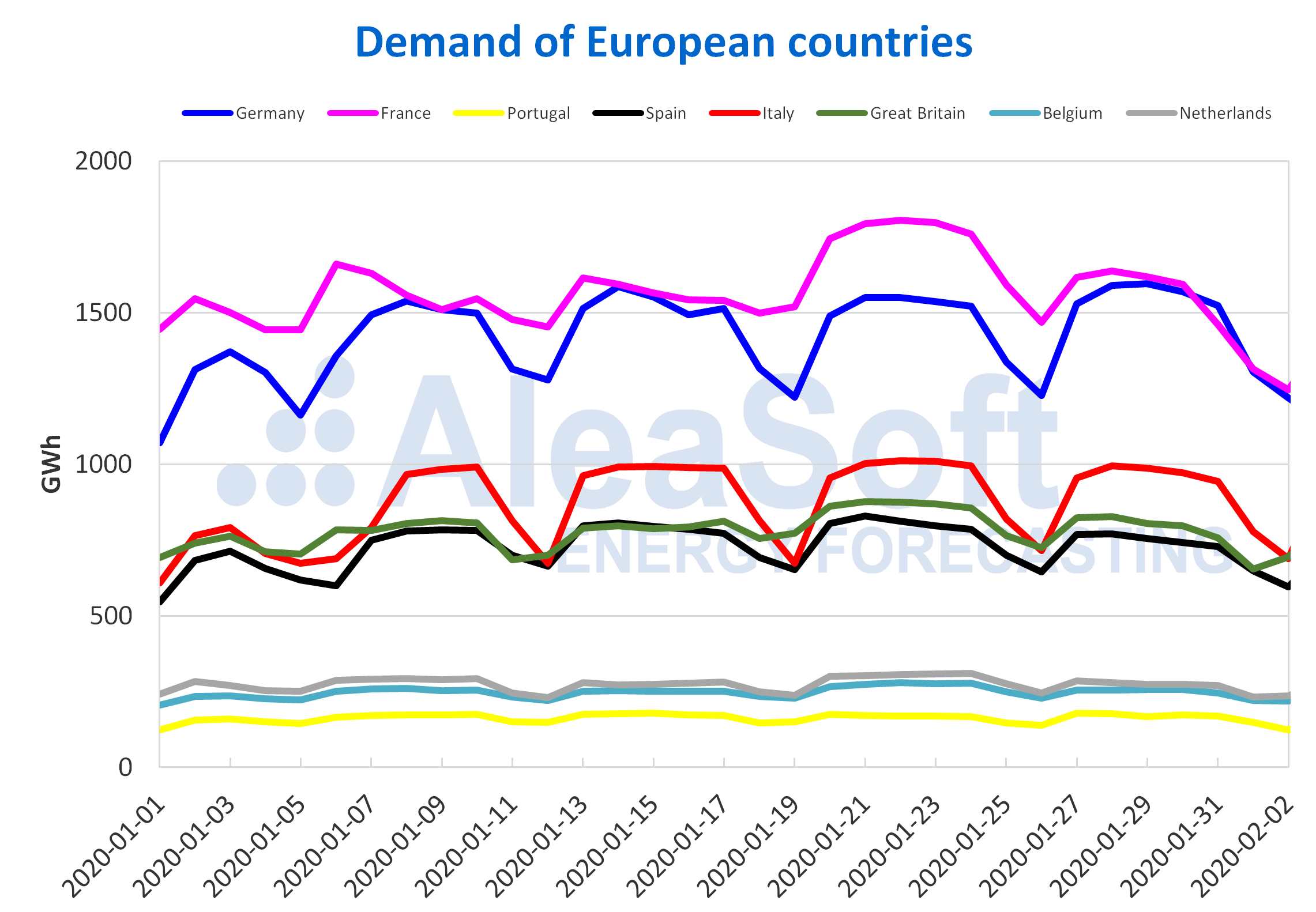 In the just concluded month of January the European electricity markets prices fell in a general way compared to the values ​​averaged in January 2019. According to the analysis carried out by AleaSoft there are several causes of this decrease. The electricity demand decreased year‑on‑year in most markets as temperatures were less cold than in the same month of last year. The solar energy production was higher in January of this year in all the analysed markets, and in some markets such as the German and the French markets, the wind energy production registered in the first month of this year was also higher. The significant decline that the gas and coal prices were experiencing also favoured the fall in prices. The average price of TTF gas in the spot market was 48% lower in January of this year than in January of last year. In the case of coal, the decrease was 37% when comparing the average value of January 2020 with respect to January 2019.

The largest year‑on‑year decrease was that of the Nord Pool market of the Nordic countries, of 55%. The daily average price of this market had a decreasing trend throughout the month of January, beginning the month with values ​​close to €30/MWh and ending it with values ​​around €20/MWh. Most of the days of January, this market was the one with the lowest price in Europe, except for some days when the German market took that place. The lowest year‑on‑year decrease was that of the EPEX SPOT market of Germany, of 29%. However, this market was the one with the second lowest average price of the month, of €35.03/MWh and was the one with the lowest hourly price, of ‑€8.77/MWh at hour 3 on day 31. On the other hand, the highest hourly price of the month was registered in the IPEX market of Italy on day 9 at hour 18 and was €77.94/MWh. Last month this market was the one with the highest average price in the continent, of €47.47/MWh, and it was also the one with the highest daily average price most of the days, except on some days when it was surpassed by the MIBEL market of Spain and Portugal or by the N2EX market of Great Britain. The other markets that are normally in the group with higher prices together with the IPEX market, the MIBEL and N2EX markets, had prices around €40/MWh most of the month, except on some days of the week of January 20 in which they reached values ​​above €50/MWh, due to the low temperatures registered. The EPEX SPOT markets of Germany, France, the Netherlands and Belgium, which are usually in the lowest‑priced market group next to the Nord Pool market, had prices between €30/MWh and €40/MWh most of the month, except in the week of January 20 in which the prices reached values ​​around €50/MWh. 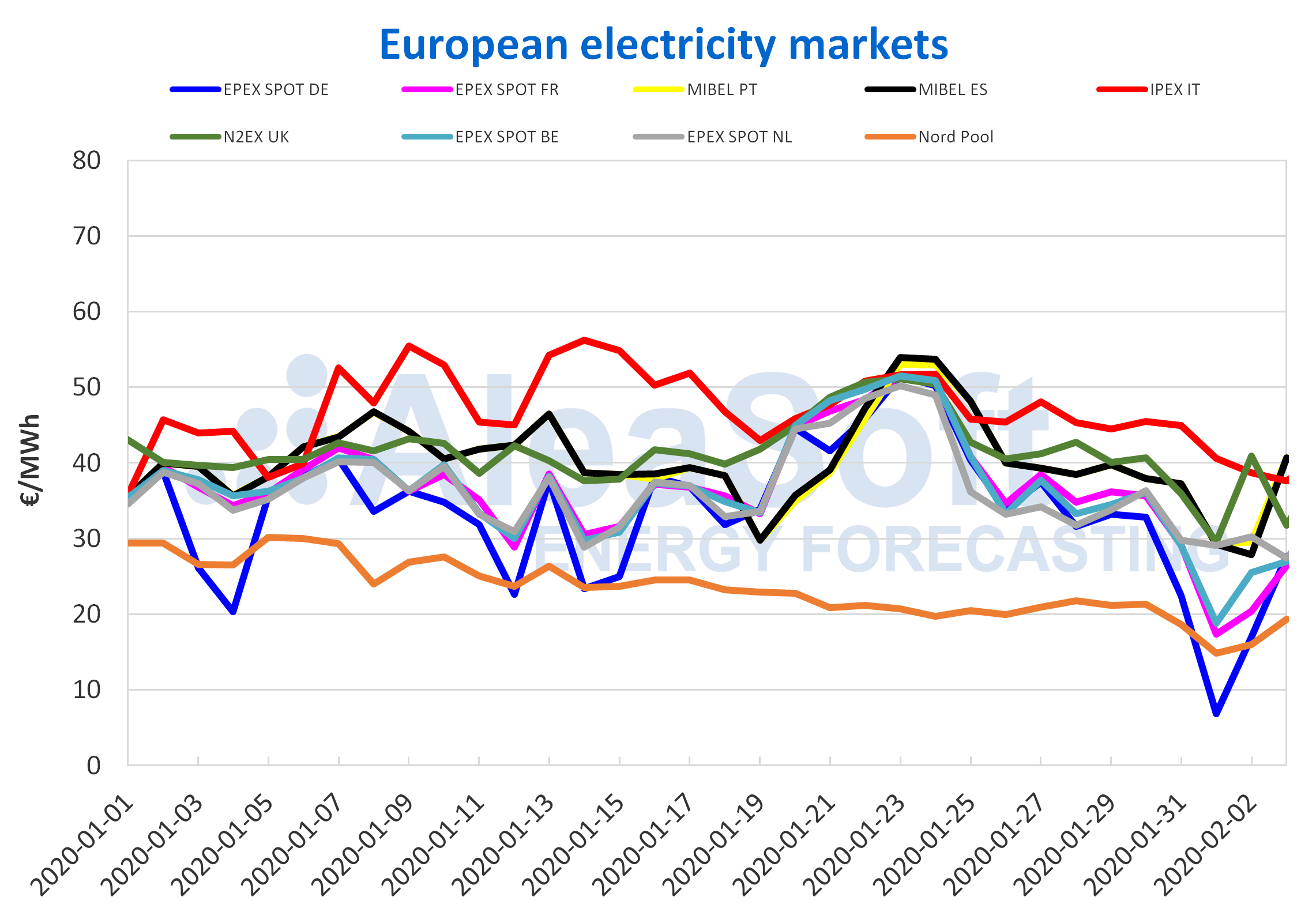 The European electricity futures prices for the second quarter of 2020 settled on January 31 below the prices registered on January 2 in all European markets analysed by AleaSoft. The futures of the Nordic countries had the greatest drop, with settlement prices 36% and 38% lower in the ICE market and in the NASDAQ market respectively. The rest of the markets, although with a much lower variation, also suffered a significant decrease of between 4.9% and 9.7%.

The futures prices for the 2021 calendar year also settled the month below the prices registered on January 2 in all European markets. The ICE and NASDAQ markets of the Nordic countries that settled 18% below the second day of the month also stood out for this product. Other markets that registered a considerable drop in prices at the end of the month were those of ICE and EEX of the UK, which fell 11% in both cases. For the rest of the markets the fall in prices was between 5.1% and 8.9%.

In general, the falls in electricity futures are related to the declines in gas and coal futures prices, and in the Nordic region, with the high levels of hydroelectric energy reserve.

The Brent oil futures prices for the month of March 2020 in the ICE market during the month of January 2020 abandoned the upward trend that began in October 2019 and began to decline. The maximum settlement price of the month, of $68.91/bbl, was registered on January 6, while the minimum value, of $58.16/bbl, was reached on January 31, which represents a $10.75/bbl fall from the monthly maximum value.

The hostilities between the United States and Iran and the production reductions in Libya and Iraq caused slight price increases during the month of January, although their influence did not last long. However, the decline in the global economic growth outlook for 2020 by the World Bank and the high levels of production and reserves of the United States exerted a downward influence on prices. The appearance of the outbreak of coronavirus in China was added to this. The concern about the global economic slowdown related to its expansion and the containment measures adopted to try to curb it were the main causes of the price decline in the second half of January.

In February, an OPEC meeting could be held with the aim of agreeing new production cuts that would allow the price stabilisation, although the concerns about the decline in demand due to the coronavirus will continue to exert their downward influence on prices in the coming days.

The TTF gas futures prices in the ICE market for the month of February 2020 began January with settlement prices above €12/MWh. On January 3, the monthly maximum settlement price of €12.99/MWh was reached. However, during the month of January the prices fell, continuing the downward trend that began after reaching on October 5, 2018 the maximum value of the last two years, of €26.86/MWh. As a result of these declines, on January 30, the lowest value of the last two years was registered, of €9.78/MWh.

The TTF gas prices in the spot market during the month of January continued with the downward trend that began at the end of November 2019, starting the month with an index price of €11.76/MWh on January 1 and ending it with a value of €9.77/MWh on Friday, January 31. This is the lowest price from €9.47/MWh registered on November 1, 2019.

The API 2 coal futures prices in the ICE market for the month of February 2020 started the year with values above $53/t. The first days of January the prices increased slightly to reach a settlement price of $55.35/t on January 13. This was related to a greater demand for coal by China after the import restrictions in 2019 and with the flooding in the mining areas of South Africa. But, as of January 13, the prices declined again, recovering the predominant downward trend since on October 4, 2018, the maximum value of the last two years of $95.70/t was reached. Thus, the month of January ended with a settlement price of $47.50/t, which is the minimum value registered in the last two years and represents a drop of around 50% compared to the maximum value registered in October 2018.

The stocks of both gas and coal are currently high and the demand is low, so it is expected that their prices will remain at a minimum in the next few days. However, lower temperatures could slightly increase the prices of both.

The CO2 emission rights futures prices in the EEX market for the reference contract of December 2020 during most of the month of January ranged between €24/t and €25/t, with a monthly average value of €24.50/t. The maximum settlement price of the month, of €25.44/t, was reached on January 17, while the monthly minimum value of €23.75/t was registered on January 30. In the coming days the prices should continue around €24/MWh. 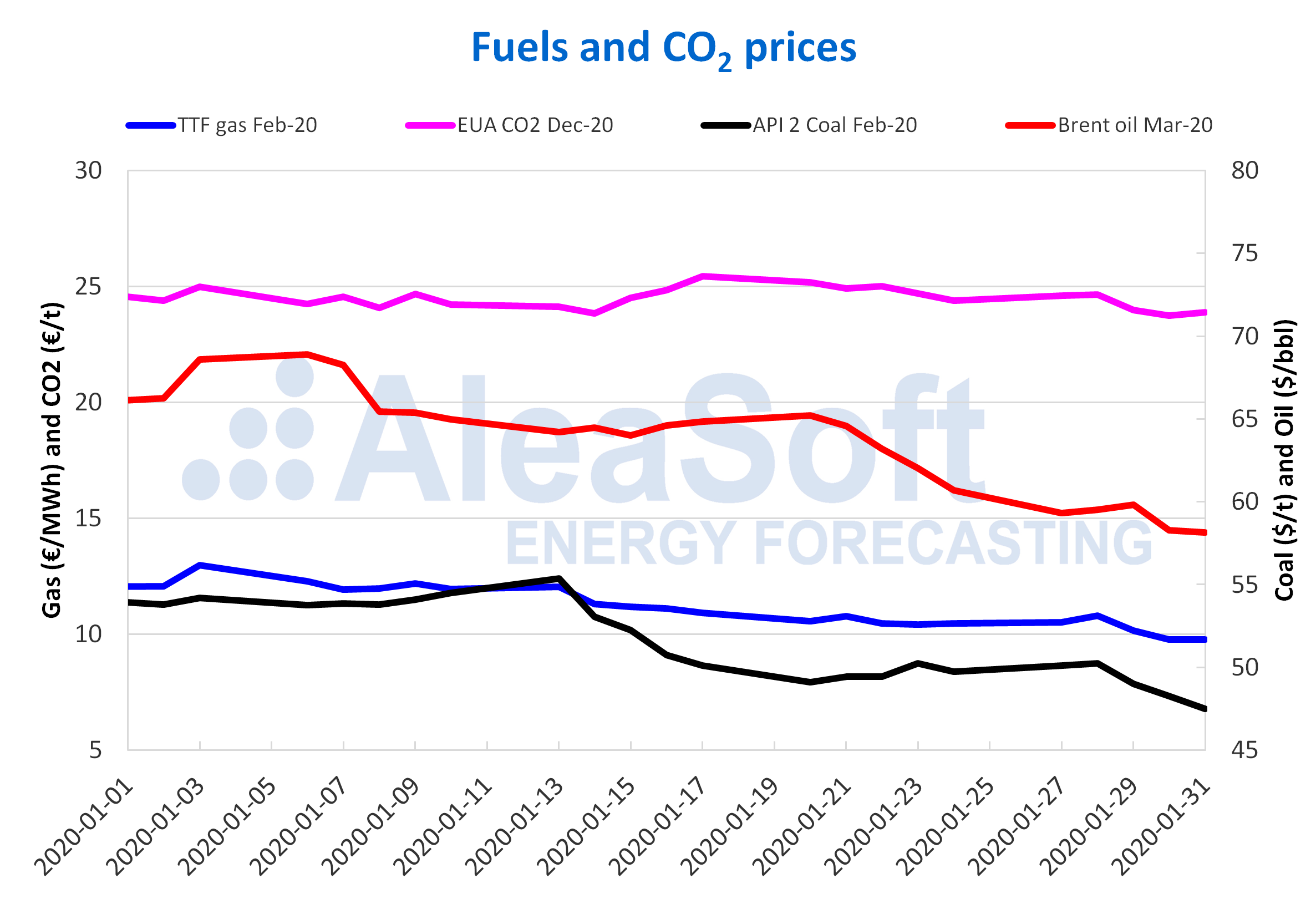 PrevAnteriorThe UNEF photovoltaic projects financing workshop: an occasion to look at the future
SiguienteThe prices of the electricity markets of Europe in January were higher than those of DecemberNext
Facebook-f Twitter Linkedin Instagram