During the third week of November, the solar energy production decreased compared to the previous week in all markets analysed at AleaSoft Energy Forecasting. The smallest fall was registered in the French market and it was 26%. In the Italian market the production decreased by 31% while in the rest of the markets it fell between 36% and 46%. 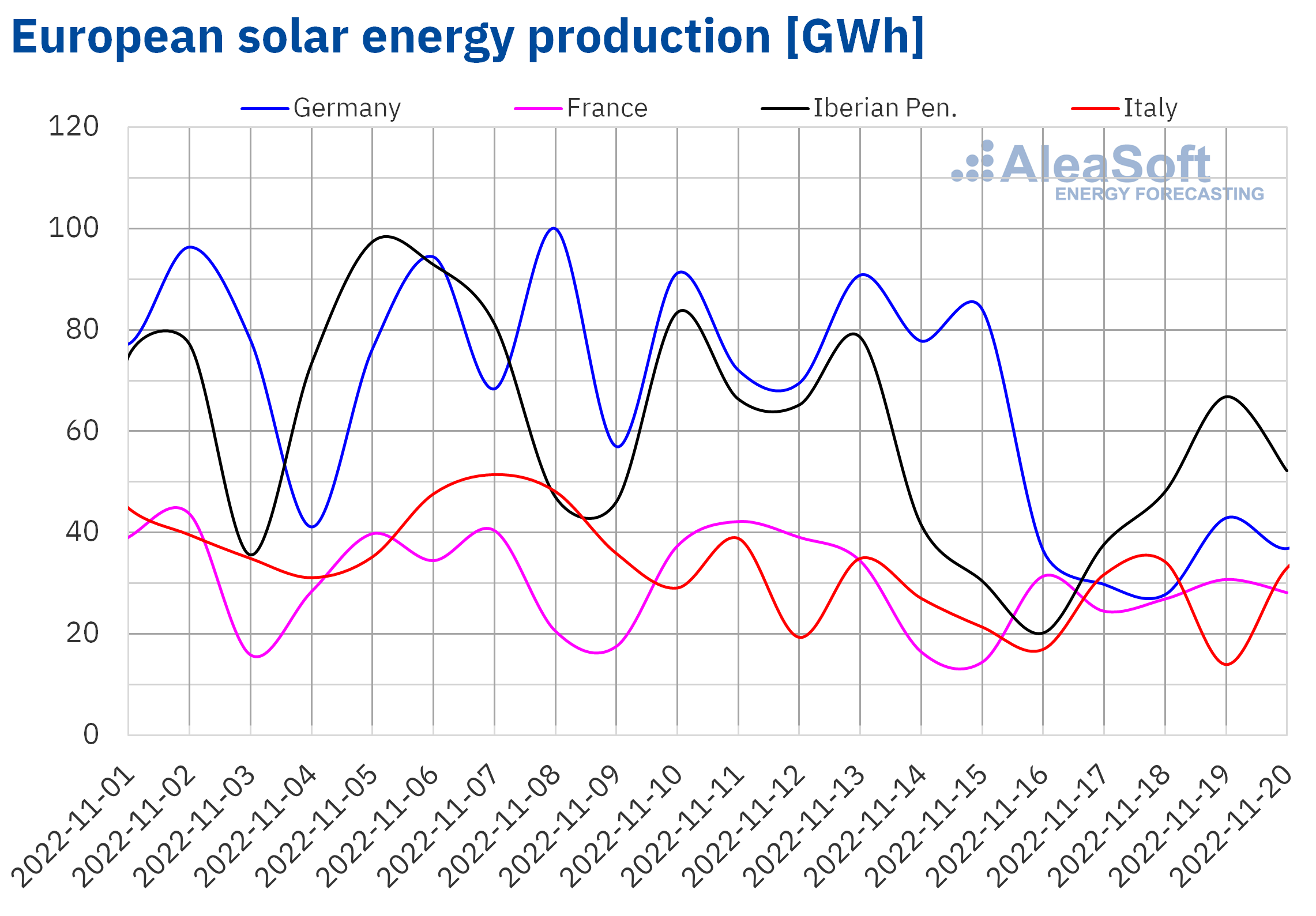 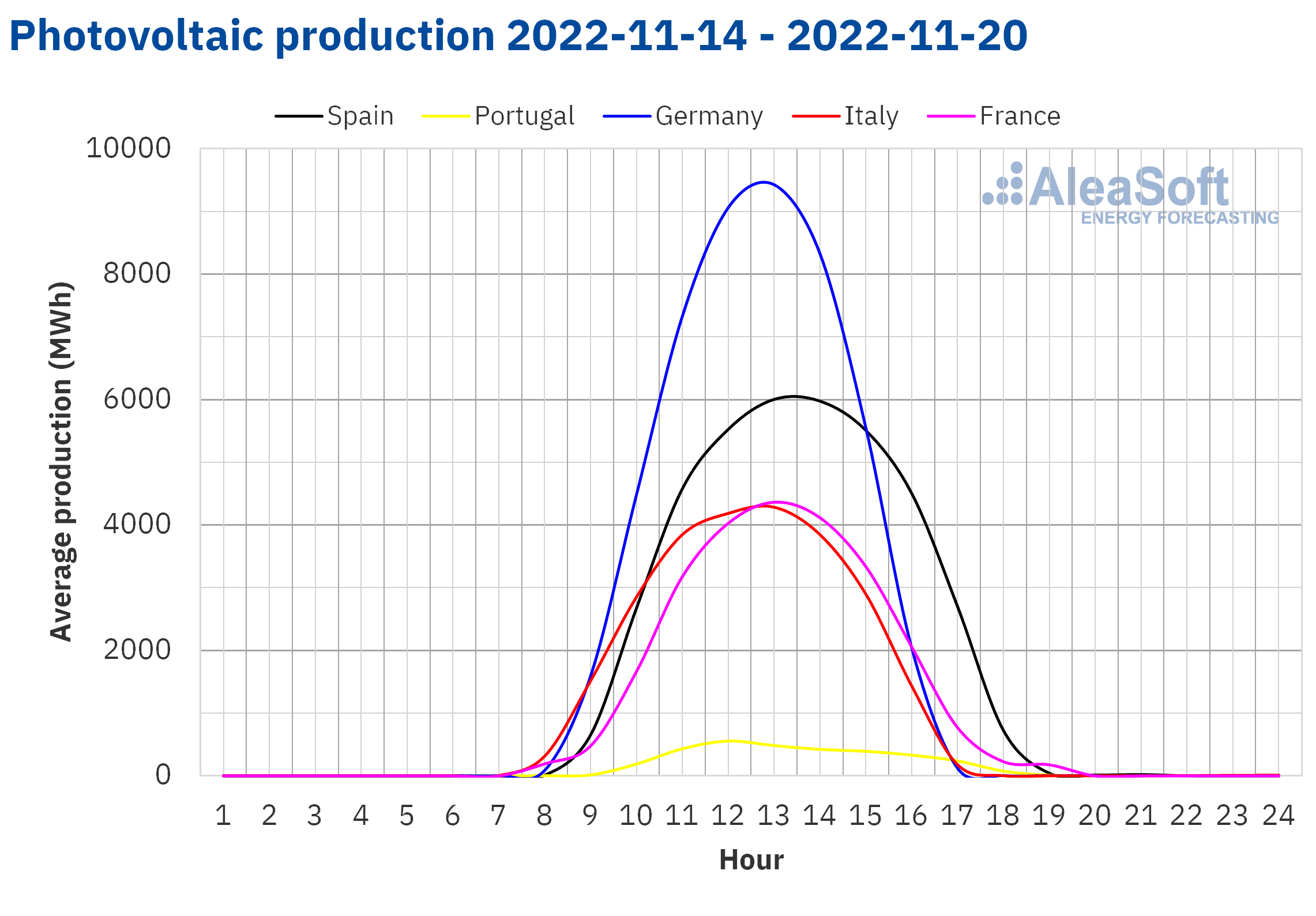 For the week of November 21, the AleaSoft Energy Forecasting’s wind energy production forecasting indicates a reduction in all analysed markets, except in the French market, where the production is expected to remain with little variation compared to the previous week. 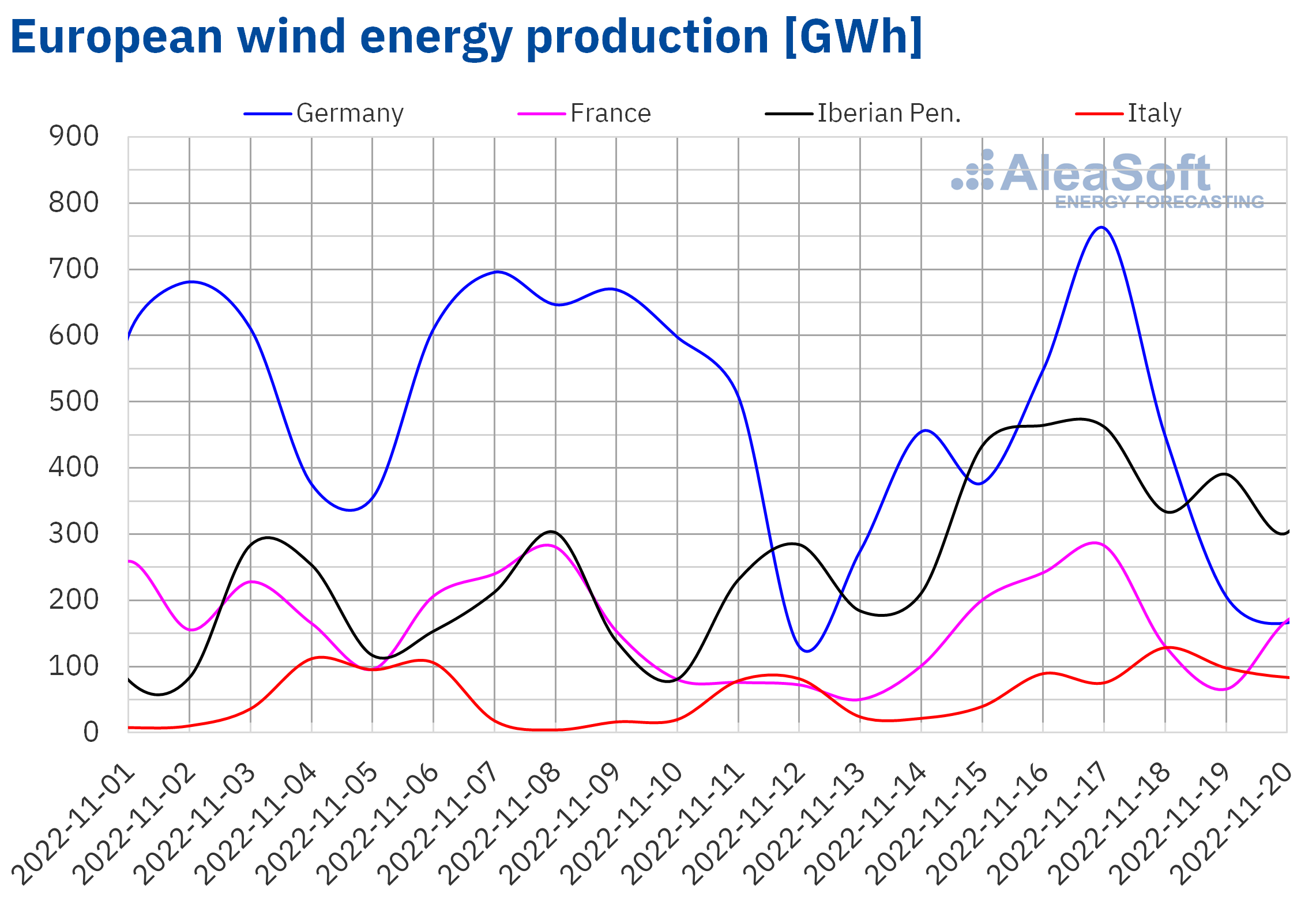 In the week of November 14, the electricity demand increased in general in the analysed European electricity markets compared to the previous week. The largest increase was registered in the market of Great Britain, of 7.9%, followed by the rises of 7.8% in the market of France, 7.6% in the market of the Netherlands and 7.4% in the Belgian market. The lowest growth was that of the Italian market, of 0.7%. In the rest of the markets, the rises were between 1.1% of the Portuguese market and 3.3% of the German market. The increase in electricity demand during this period was favoured by the general drop in temperatures in European countries. In the case of France and Belgium, the recovery in demand after the holiday of November 11, Armistice Day, also had an influence.

For the week of November 21, according to the demand forecasting made by AleaSoft Energy Forecasting, it is expected to continue increasing in a large part of the European markets, mostly favoured by lower temperatures than those registered during the previous week. However, the demand is expected to decrease in the market of Belgium. 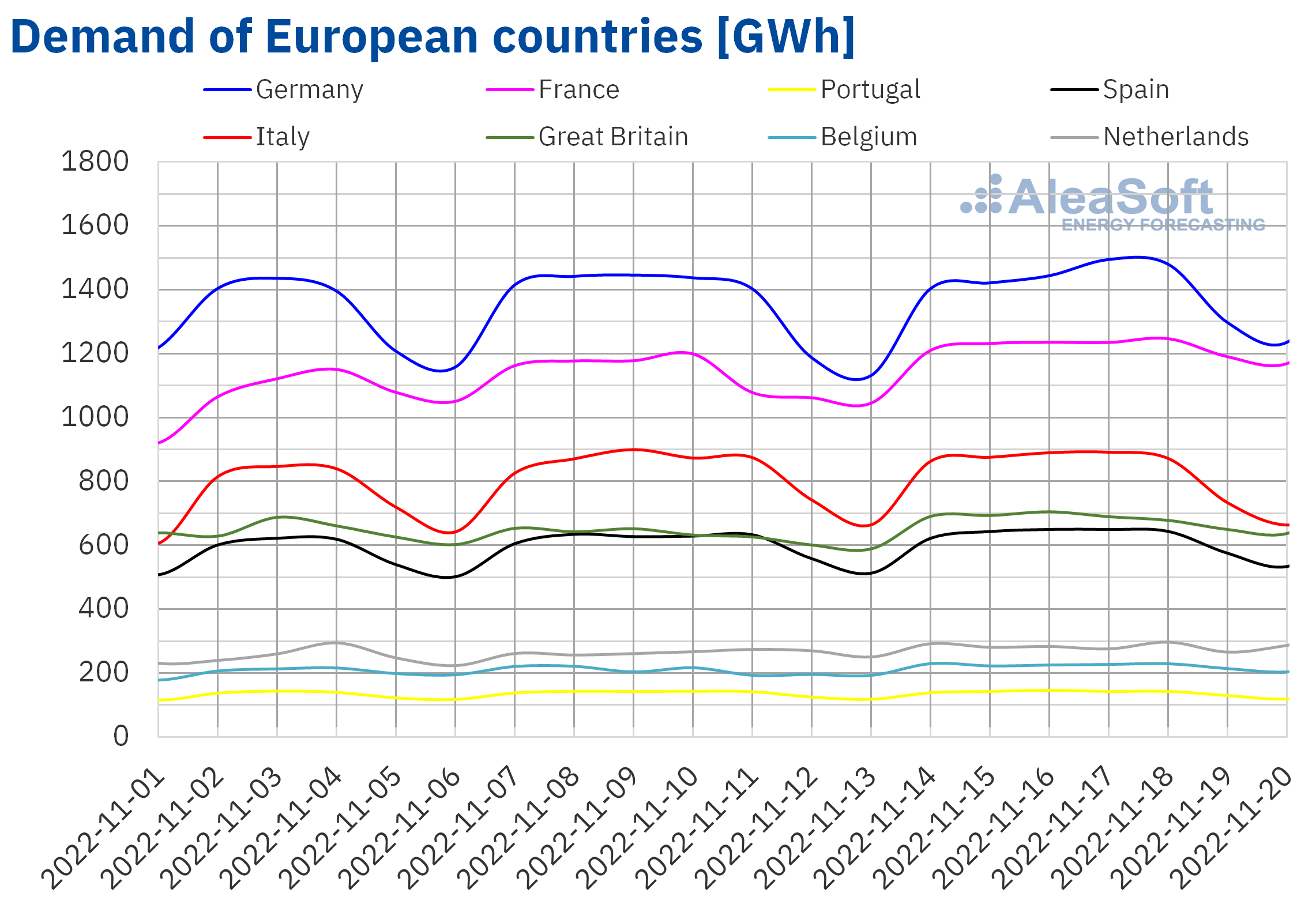 In the week of November 14, prices of almost all European electricity markets analysed at AleaSoft Energy Forecasting increased compared to the previous week. However, the MIBEL market of Spain and Portugal registered decreases of 17% and 18% respectively. On the other hand, the highest percentage rise in prices, of 179%, was that of the Nord Pool market of the Nordic countries, while the smallest increase was that of the IPEX market of Italy, of 20%. In the rest of the markets, the increases were between 31% of the N2EX market of the United Kingdom and 54% of the EPEX SPOT market of Belgium.

In the third of November, the highest average price, of €238.00/MWh, was that of the Italian market. On the other hand, the lowest weekly average was that of the Nordic market, of €92.13/MWh. In the rest of the markets, prices were between €100.85/MWh of the Portuguese market and €196.58/MWh of the French market.

During the week of November 14, the 42% rise in the weekly average price of the TTF gas in the spot market compared to the previous week exerted its upward influence on European electricity markets prices. The general increase in electricity demand and the decrease in solar energy production also contributed to the registered price increases. In addition, in the case of the German market, the wind energy production decreased. On the other hand, the significant increase in production with this technology in the Iberian Peninsula allowed prices to fall in the MIBEL market. 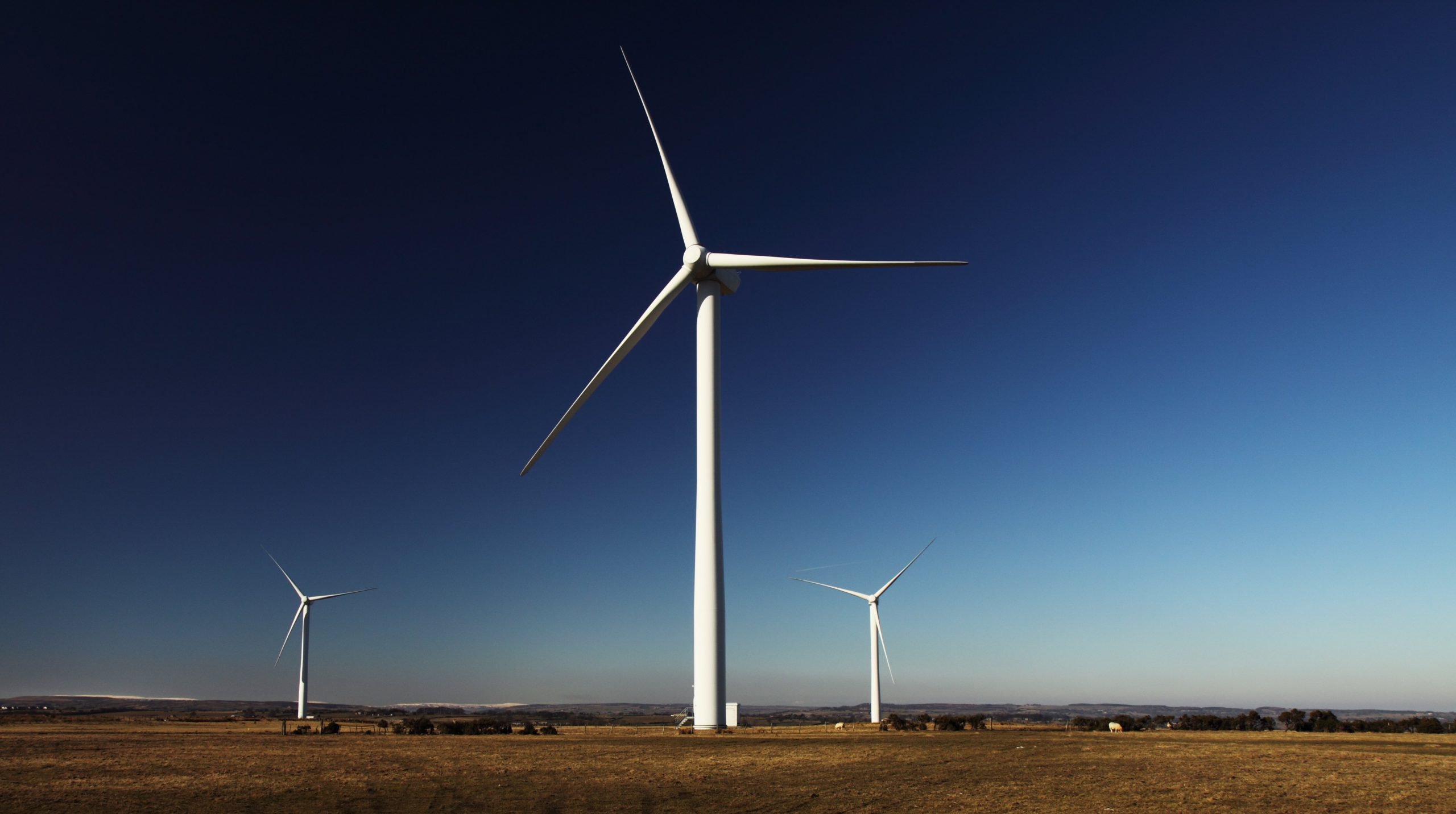 The AleaSoft Energy Forecasting’s price forecasting indicates that in the fourth week of November prices might continue to increase in most analysed markets, influenced by increases in demand and decreases in wind energy production in most markets. However, prices might fall in the Iberian and British markets. 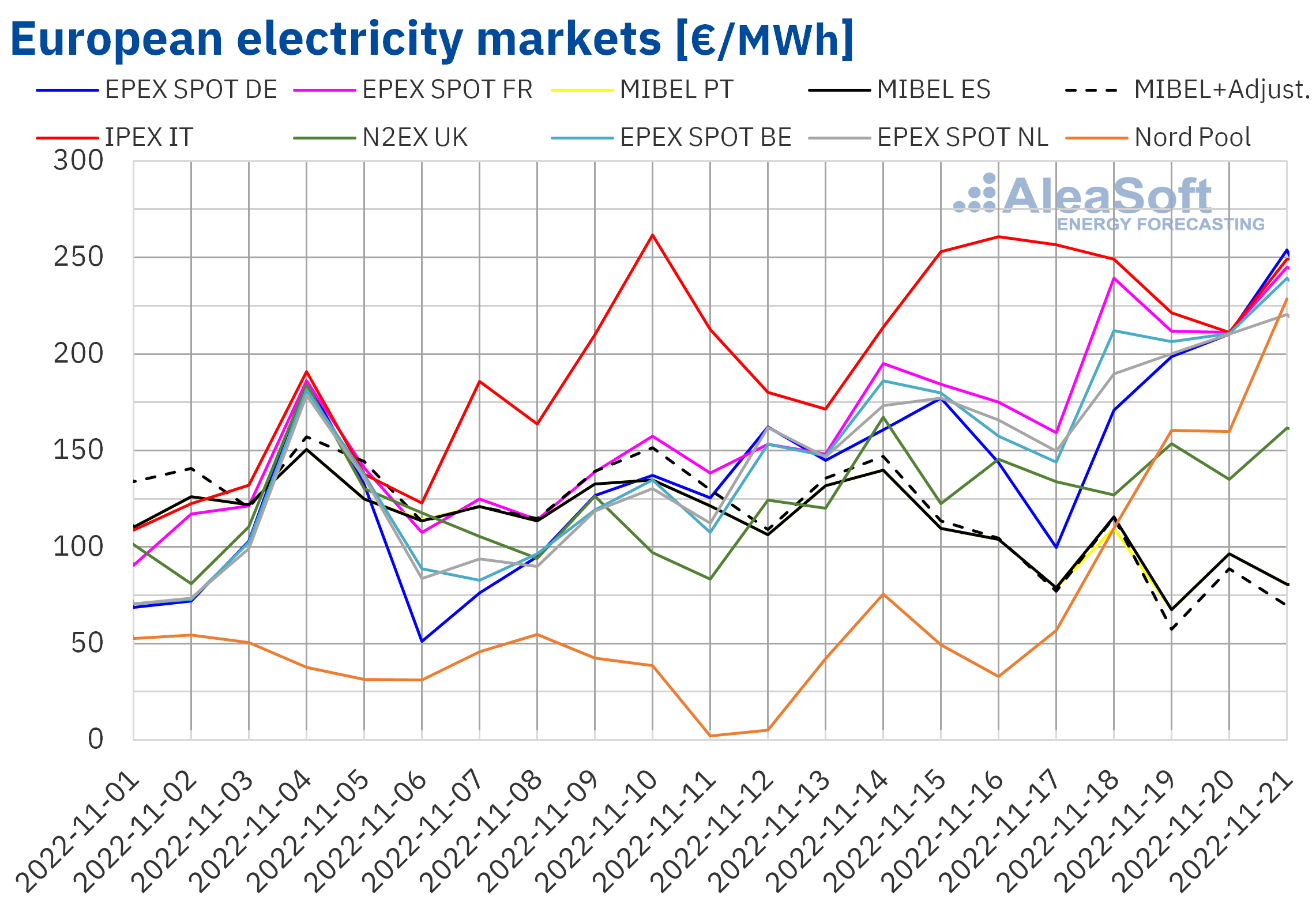 Demand concerns due to the economic situation exerted their downward influence on Brent oil futures prices in the third week of November. On Monday, November 14, the OPEC lowered its oil demand growth forecast for 2022 and 2023. On November 15, the International Energy Agency also lowered its demand forecasts for 2023. In addition, the increase in cases of COVID‑19 in China also contributed to concerns about the evolution of the crude oil demand and to the decline in prices in the last part of the week.

The high levels of gas reserves favoured price declines in recent months. But the number of ships waiting to unload at the regasification plants is decreasing and the drop in temperatures might favour the increase in gas prices in the following weeks. 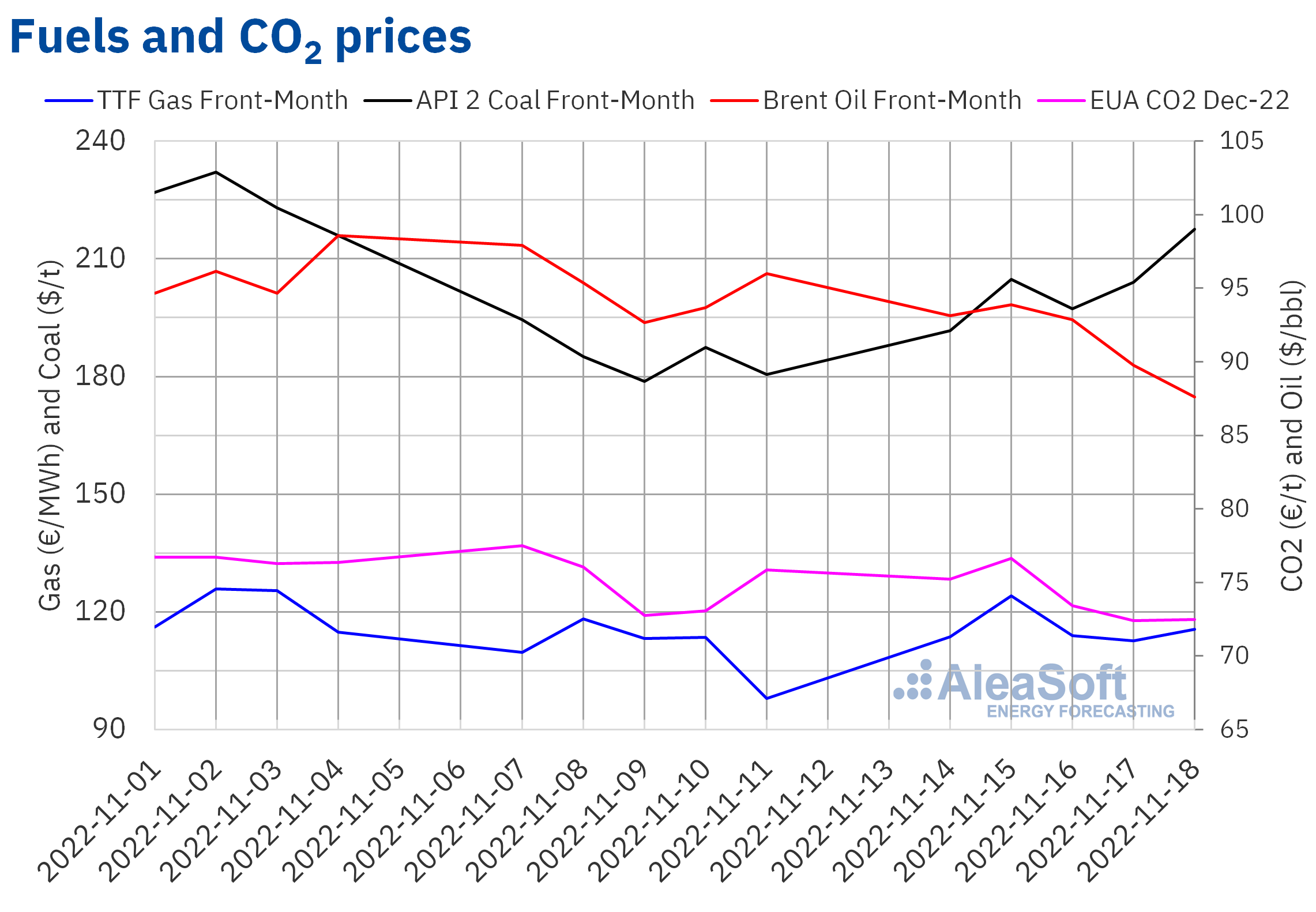 On next Thursday, November 24, a new edition of the monthly webinars of AleaSoft Energy Forecasting and AleaGreen will be held. The speakers will be Oriol Saltó i Bauzà, Associate Partner at AleaGreen and Jaime Vázquez, Director, PPA & Finance at Soto Solar. Antonio Delgado Rigal, CEO of AleaSoft Energy Forecasting, and Tomás García, who works as Senior Director, Energy & Infrastructure Advisory at JLL, will join the analysis table of the Spanish version of the webinar. In the webinar, the usual analysis of the evolution of the European energy markets will be carried out. In addition, current affairs and trends in renewable energy projects financing will be analysed, comparing PPA with full merchant projects.