AleaSoft Energy Forecasting, October 4, 2021. In the week when September ended and October started, gas and CO2 records were registered again, causing historical hourly or daily highs to be reached in some electricity markets and electricity futures to rise in most cases. However, the increase in wind energy production caused prices to fall in several spot markets and even negative prices were registered in some hours of the weekend. The demand increased in most markets.

The solar energy production increased by 12% in the Iberian Peninsula during the week of September 27 compared to the previous week. In the rest of the markets analysed at AleaSoft Energy Forecasting, the production fell between 4.8% and 18%.

For the week of October 4 to 10, the AleaSoft Energy Forecasting‘s solar energy production forecasting points to a decrease in the markets of Italy, Germany and Spain. 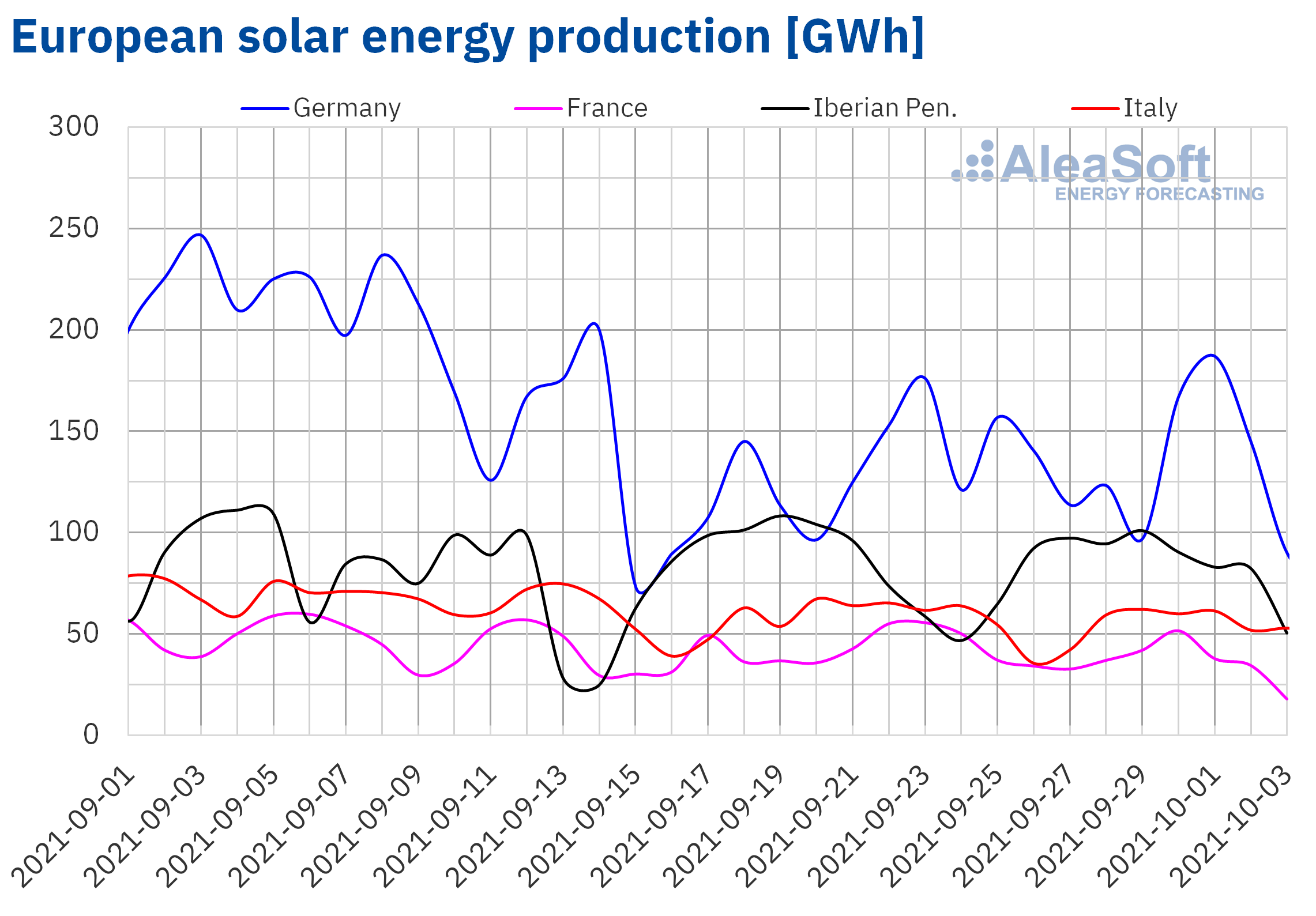 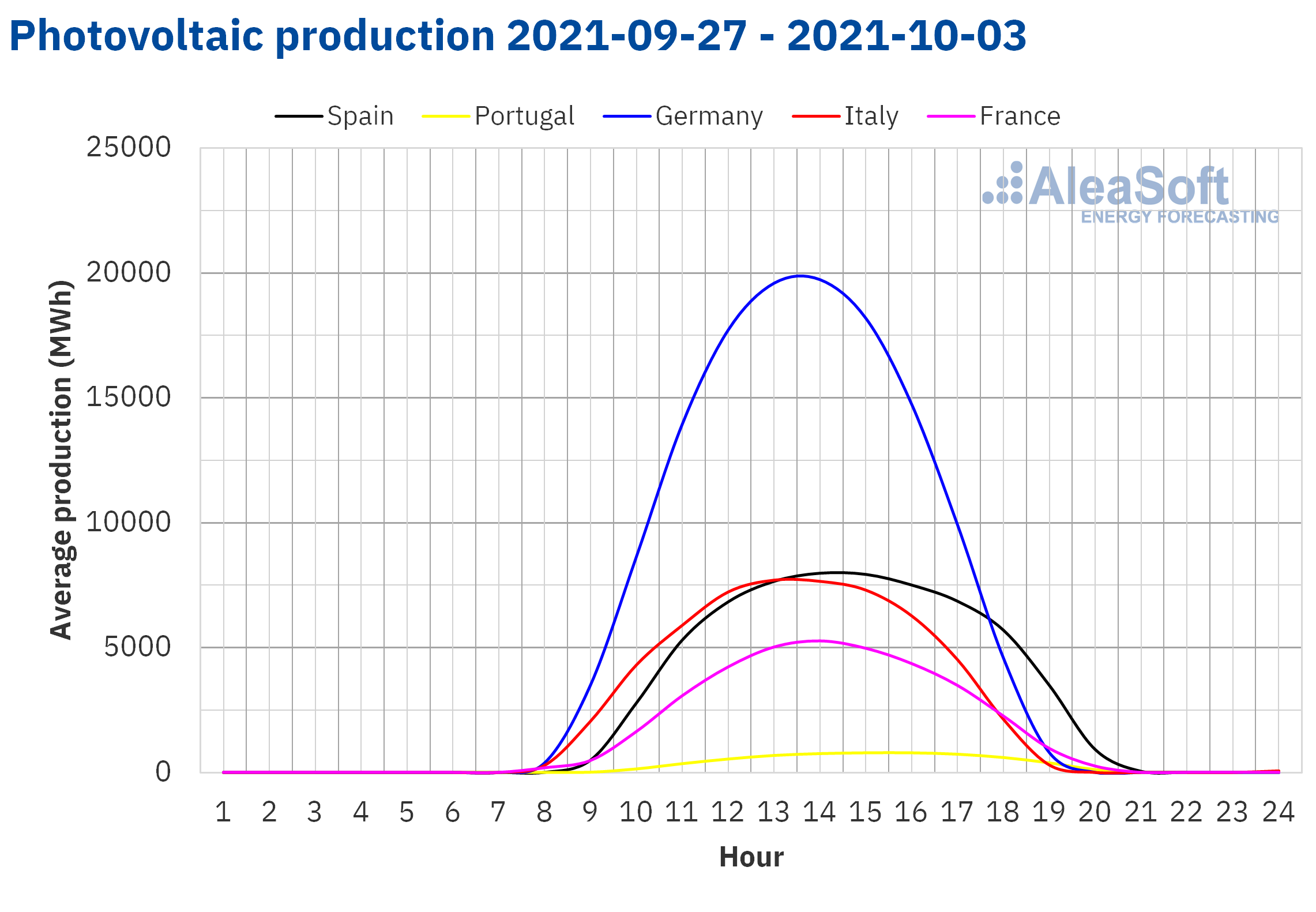 During the last week of September, the wind energy production increased by 185% in the French market and by 68% in the German market compared to the previous week. In the markets of Italy, Spain and Portugal, the production with this technology fell between 24% and 25%. In the case of the Iberian market, although the wind energy production decreased for the whole week, during the weekend it increased considerably. The average production of Saturday and Sunday was 153% higher than the average registered between Monday and Friday of that week.

For the week that began on October 4, the AleaSoft Energy Forecasting’s wind energy production forecasting indicates that it will increase in the Italian market and in the Spanish market, while it is expected to be lower in the markets of Germany, Portugal and France. 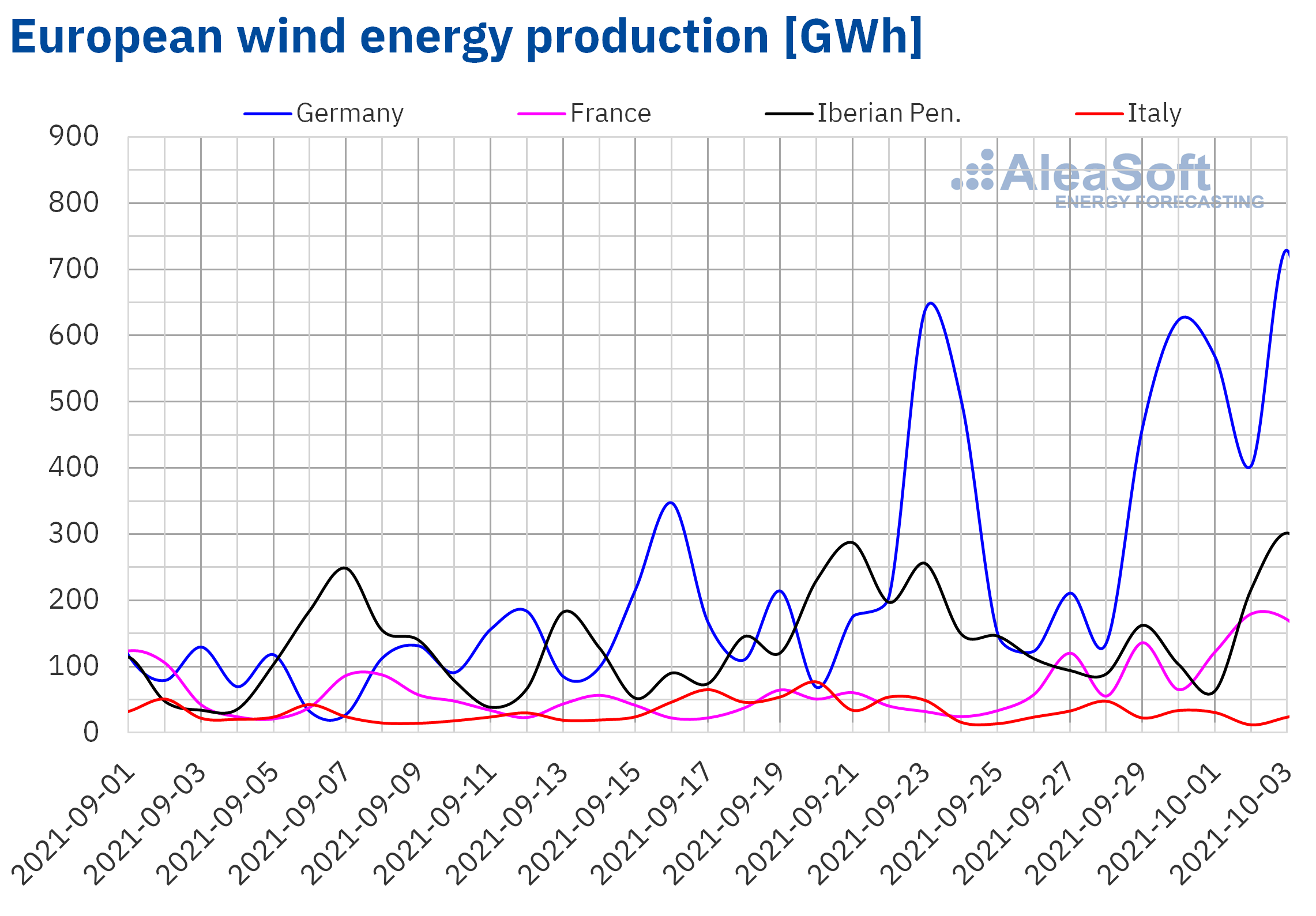 In the week of September 27, the electricity demand recovered compared to the previous week in most of the electricity markets of Europe. The markets of Belgium, France, Great Britain and Germany registered increases between 1.7% and 2.5%. In the markets of the Iberian Peninsula and the Netherlands there were increases lower than 1.0%. On the other hand, in the Italian market there was a decrease of 0.5%.

For the week of October 4, AleaSoft Energy Forecasting’s demand forecasts indicate that there will be declines in the markets of Germany and Spain, while there will be increases in markets such as France, Portugal and Great Britain. 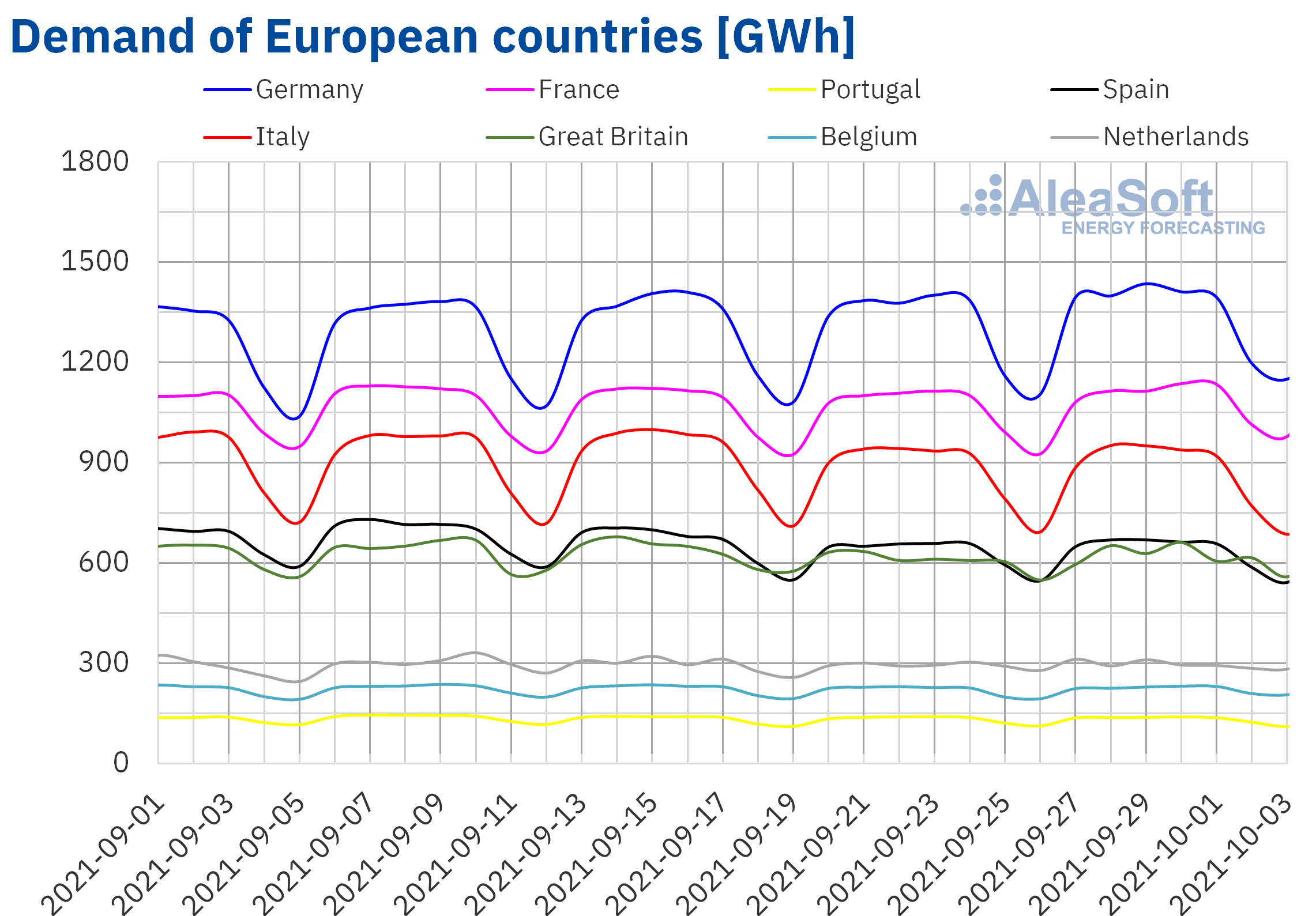 In the week of September 27, the prices of most of the European electricity markets analysed at AleaSoft Energy Forecasting fell. The exceptions were the IPEX market of Italy, with an increase of 16%, and the MIBEL market of Spain and Portugal, with increases of 7.9% and 7.7% respectively. On the other hand, the largest price drops were those of the Nord Pool market of the Nordic countries, of 22%, and that of the EPEX SPOT market of Belgium, of 21%. In the rest of the markets, price declines were between 3.9% of the N2EX market of the United Kingdom and 13% of the EPEX SPOT market of the Netherlands.

On Sunday, October 3, the lowest daily prices of the week were registered in almost all the analysed markets. The lowest price was that of the Nord Pool market, of €20.68/MWh. In the German, Belgian and French markets, prices were €40.96/MWh, €64.29/MWh and €64.53/MWh respectively, while in the rest of the markets prices remained above the €100/MWh. On the other hand, the highest daily price of the week, of €227.13/MWh, was reached on Saturday, October 2, in the Italian market, which was the highest in this market at least since January 2005. The previous day, October 1, the highest price was registered in the MIBEL market of Spain and Portugal. In this market, a daily price of €216.01/MWh was reached, the highest price in its history so far. 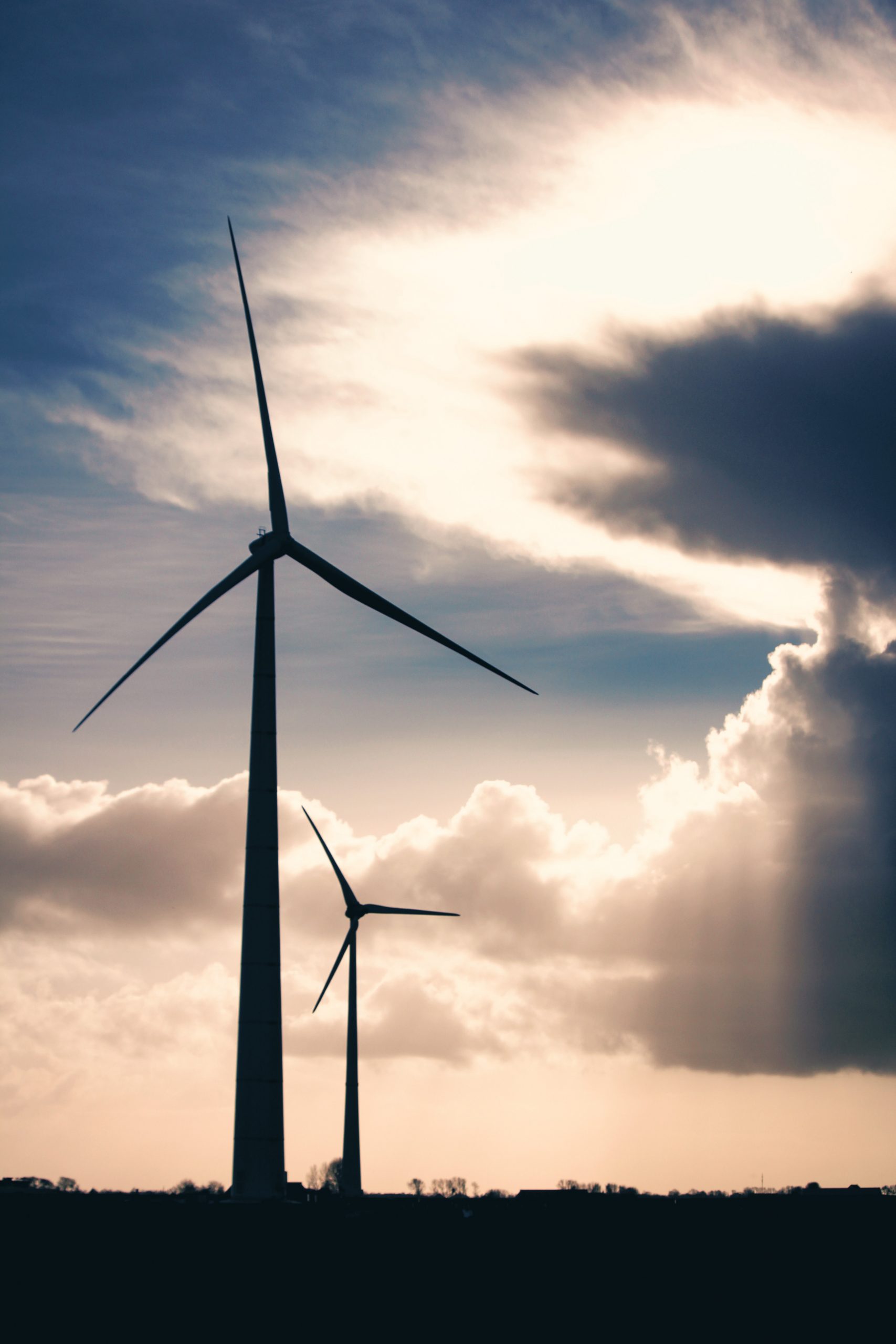 The AleaSoft Energy Forecasting’s price forecasting indicates that in the week of October 4, prices might increase in most markets, influenced by the decrease in wind energy production in countries such as Germany, France and Portugal, as well as by high gas and CO2 prices. The reduction in solar energy production in the German and Spanish markets will also contribute to the price increases. 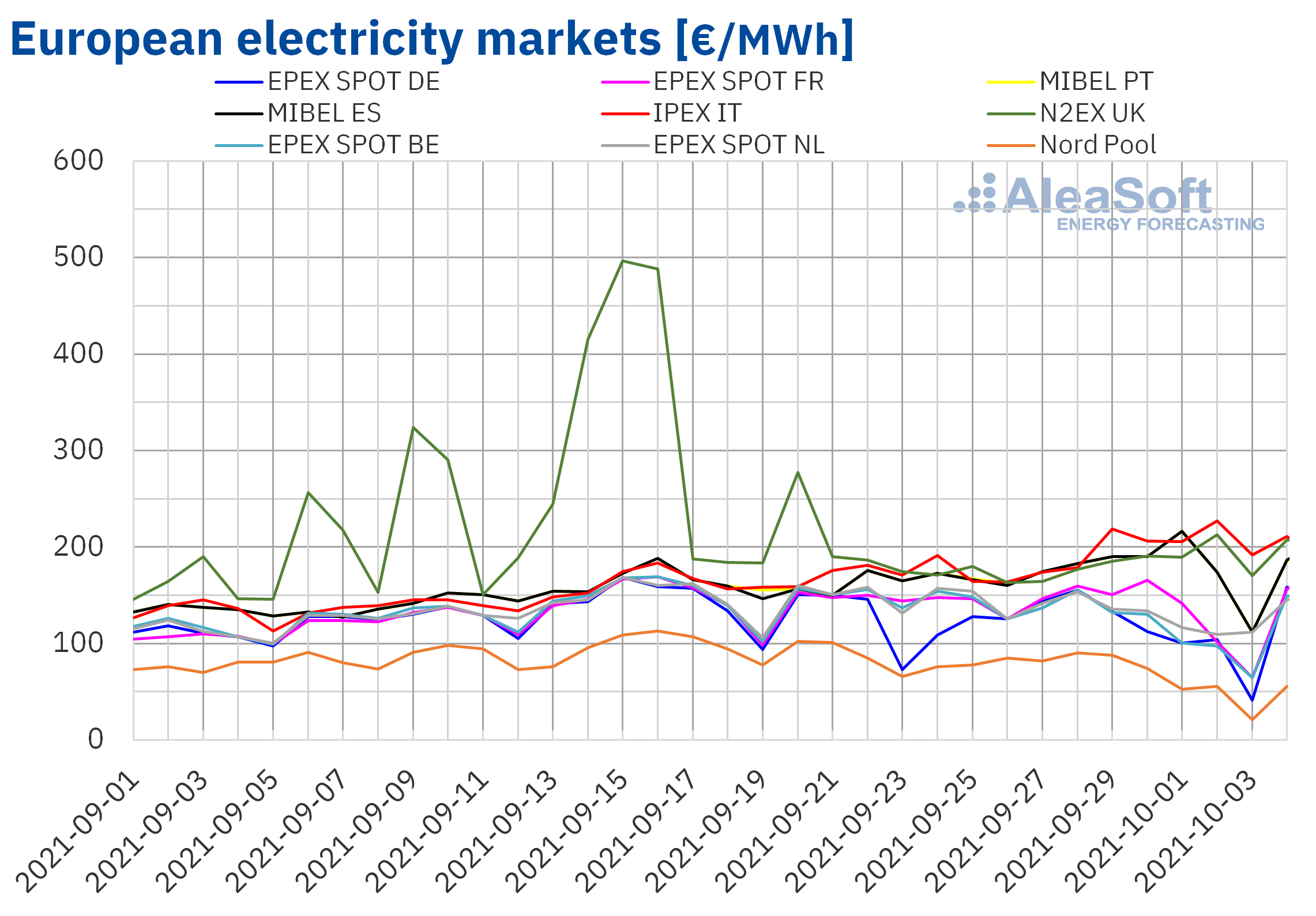 In the last week of September, settlement prices of electricity futures for the first quarter of next year registered increases between the sessions of September 24 and October 1 in most of the European markets analysed at AleaSoft Energy Forecasting. The exceptions were the ICE market and the NASDAQ market, both of the Nordic countries, where declines of 17% and 15% were registered respectively. In the rest of the markets, the increases were between the 28% marked by the ICE market of the United Kingdom and the Netherlands and the 35% marked by the OMIP market of Spain and Portugal. Most of the European electricity futures markets started October with prices for the next quarter above €200/MWh.

The outlook was very similar if the behaviour of electricity futures prices for the year 2022 is observed. The rise occurred in all markets except ICE and NASDAQ of the Nordic countries, where the settlement prices of this product fell between the two analysed sessions by 11% in both markets. In this case, the EEX market of Spain was the one that registered the greatest increase, of 27%, while in the rest of the markets the increases were greater than 20%.

The Brent oil futures prices for the Front‑Month in the ICE market, the last week of September, remained above $78.50/bbl. The maximum settlement price for the week, of $79.53/bbl, was reached on Monday, September 27. This price was 7.6% higher than that of the previous Monday and the highest since October 2018.

The progressive recovery in demand continues to favour the increase in Brent oil futures prices. This can be reinforced by the high gas prices, since part of the energy needs could be covered with oil derivatives. On the other hand, the OPEC+ meets on October 4. The results of this meeting on a possible extension of the planned production increases are expected to influence the evolution of prices in the coming days.

As for the TTF gas futures prices in the ICE market for the Front‑Month, during the last week of September they increased until reaching a settlement price of €97.77/MWh on Thursday, September 30. This price was 40% higher than that of the previous Thursday and the highest in, at least, the last eight years. On Friday, October 1, the price fell 4.2% to €93.63/MWh. But in the session of Monday, October 4, these futures were traded above €99/MWh.

The fact that Russia does not use all available pipeline capacity to supply gas to Europe in October while reserve levels remain low and demand in Asia remains high might lead to further rises in gas futures prices.

Regarding the settlement prices of the CO2 emission rights futures in the EEX market for the reference contract of December 2021, on Monday, September 27, they reached a new historical maximum of €64.37/t. The rest of the week the prices were slightly lower. On Thursday, September 30, the minimum settlement price of the week, of €61.74/t, was registered, which was still 2.0% higher than that of the previous Thursday. 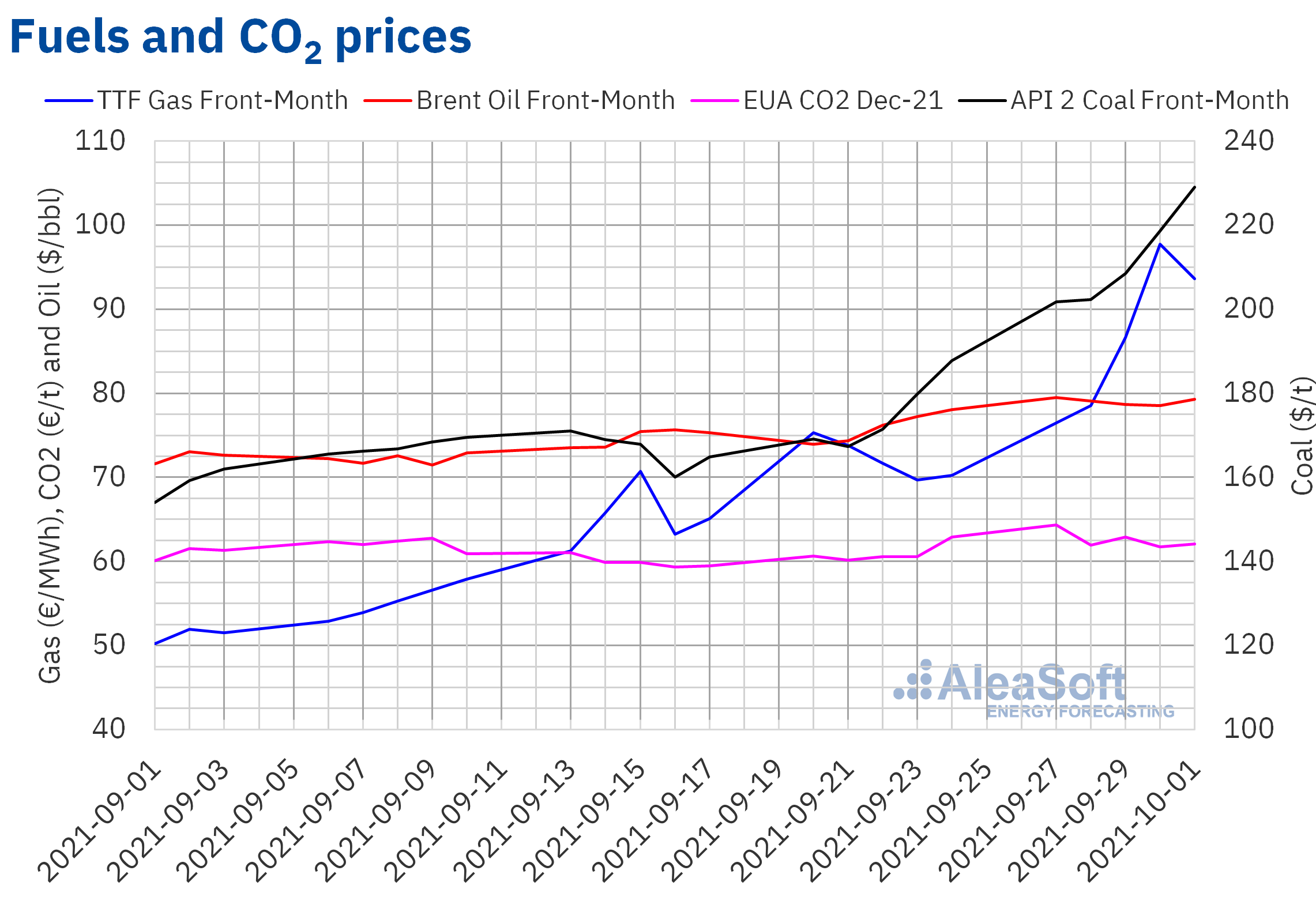 At the beginning of the fourth quarter of the year, at AleaSoft Energy Forecasting the long‑term price forecasting reports for the European electricity markets are being updated. This update will incorporate the situation of high fuels and CO2 prices and their impact on the prospects in the mid‑ and long‑term. In addition, the periodic review of the scenarios of all the variables involved in the forecasting process will be carried out, taking into account the most up‑to‑date information.

On Thursday, October 7, the next AleaSoft Energy Forecasting’s webinar will be held: “Energy markets in the recovery from the economic crisis one year later”. On this occasion, there will be the participation of two speakers from Deloitte Spain: Pablo Castillo Lekuona, Senior Manager of Global IFRS & Offerings Services and Carlos Milans del Bosch, Partner of Financial Advisory, who will join Oriol Saltó i Bauzà, Manager of Data Analysis and Modelling at AleaSoft Energy Forecasting. This webinar will be held almost a year after the webinar of October 2020 with the same speakers and it aims to give an updated vision of the topics analysed on that occasion, such as the evolution of European energy markets, the financing of renewable energy projects and the importance of the forecasting in audits and portfolio valuation. In the second part of the webinar in Spanish, Antonio Delgado Rigal, CEO of AleaSoft Energy Forecasting, will join the speakers at the analysis table where the questions that are received will be answered.