AleaSoft Energy Forecasting, December 20, 2021. In the last weeks of 2021, European electricity spot and futures markets continued breaking price records, in a context in which gas is also at record highs and CO2 prices remain high. The new nuclear shutdowns announced in France added more uncertainty to the situation and the general fall in wind energy production in the third week of December further aggravated the outlook.

According to the AleaSoft Energy Forecasting’s solar energy production forecasting, in the week of December 20, the production with this technology is expected to recover in Germany and a weekly decline in the markets of Spain and Italy. 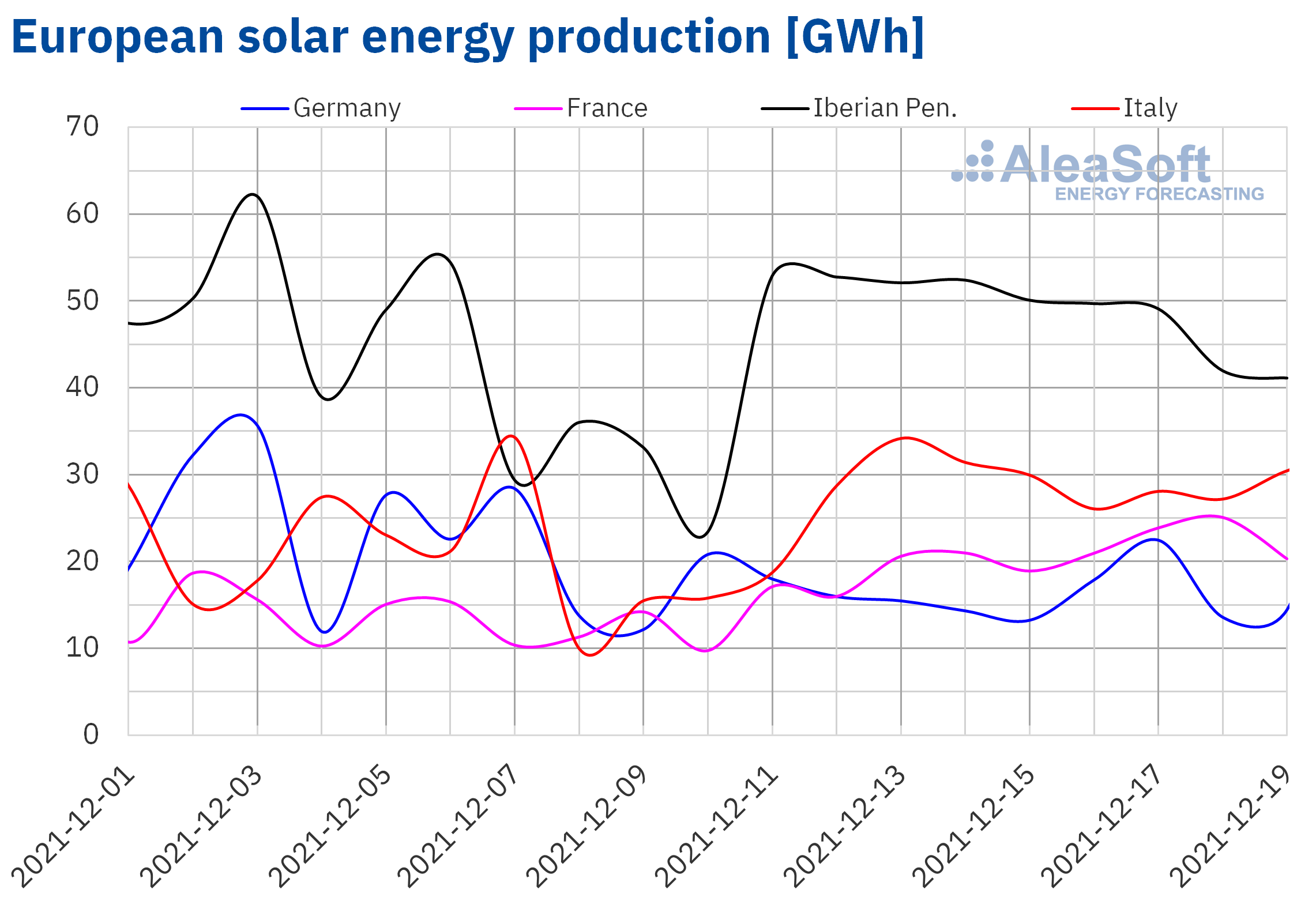 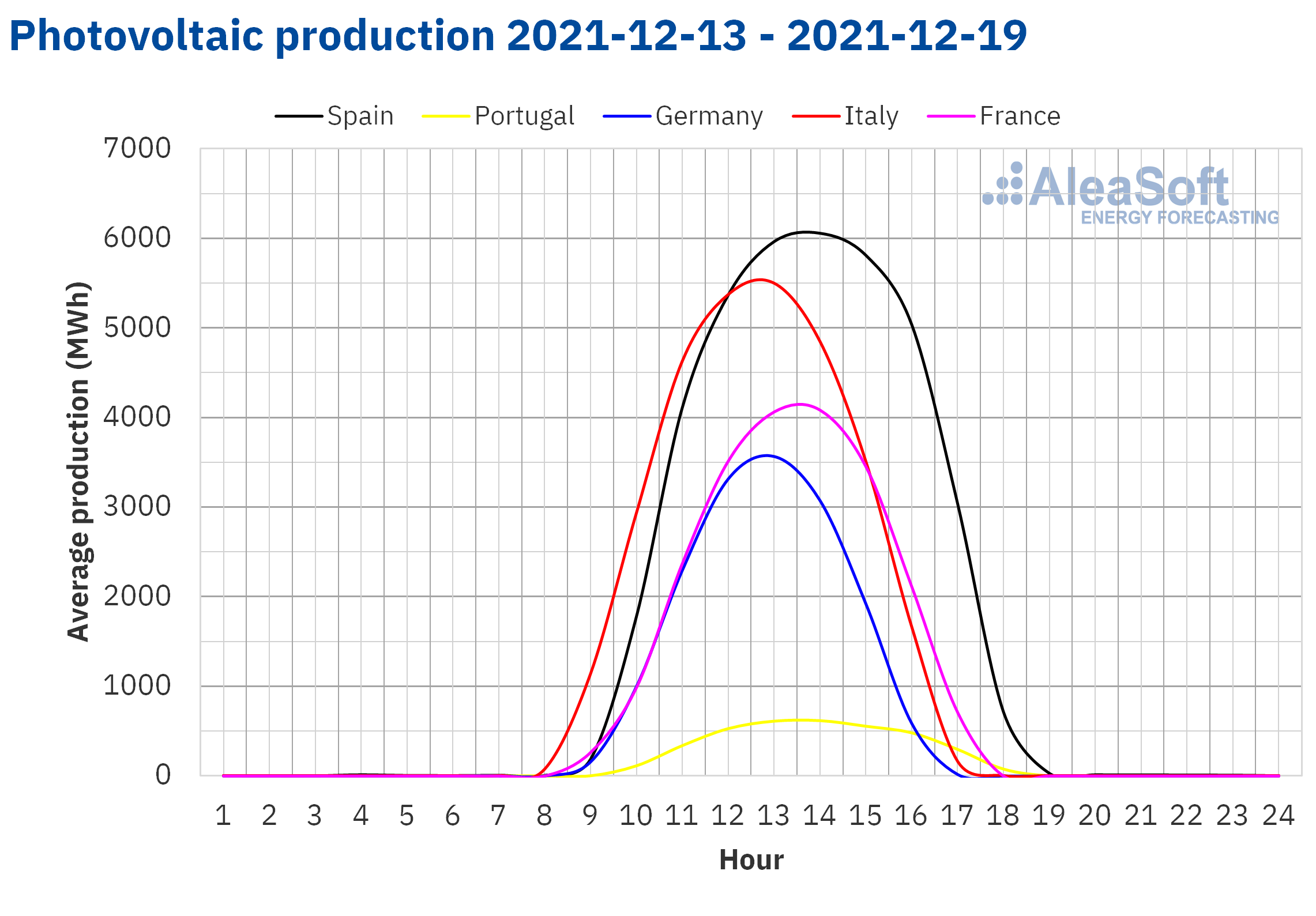 In the case of the wind energy production, in the week of December 13 there was a general decrease compared to the previous week in all European markets analysed at AleaSoft Energy Forecasting. The decreases were between 5.6% of the German market and 66% of the Spanish market.

In the penultimate week of the month, the production with this technology is expected to increase compared to the previous week in the markets of Germany, France and Spain, while it will fall again in Portugal and Italy, according to the AleaSoft Energy Forecasting’s wind energy production forecasting. 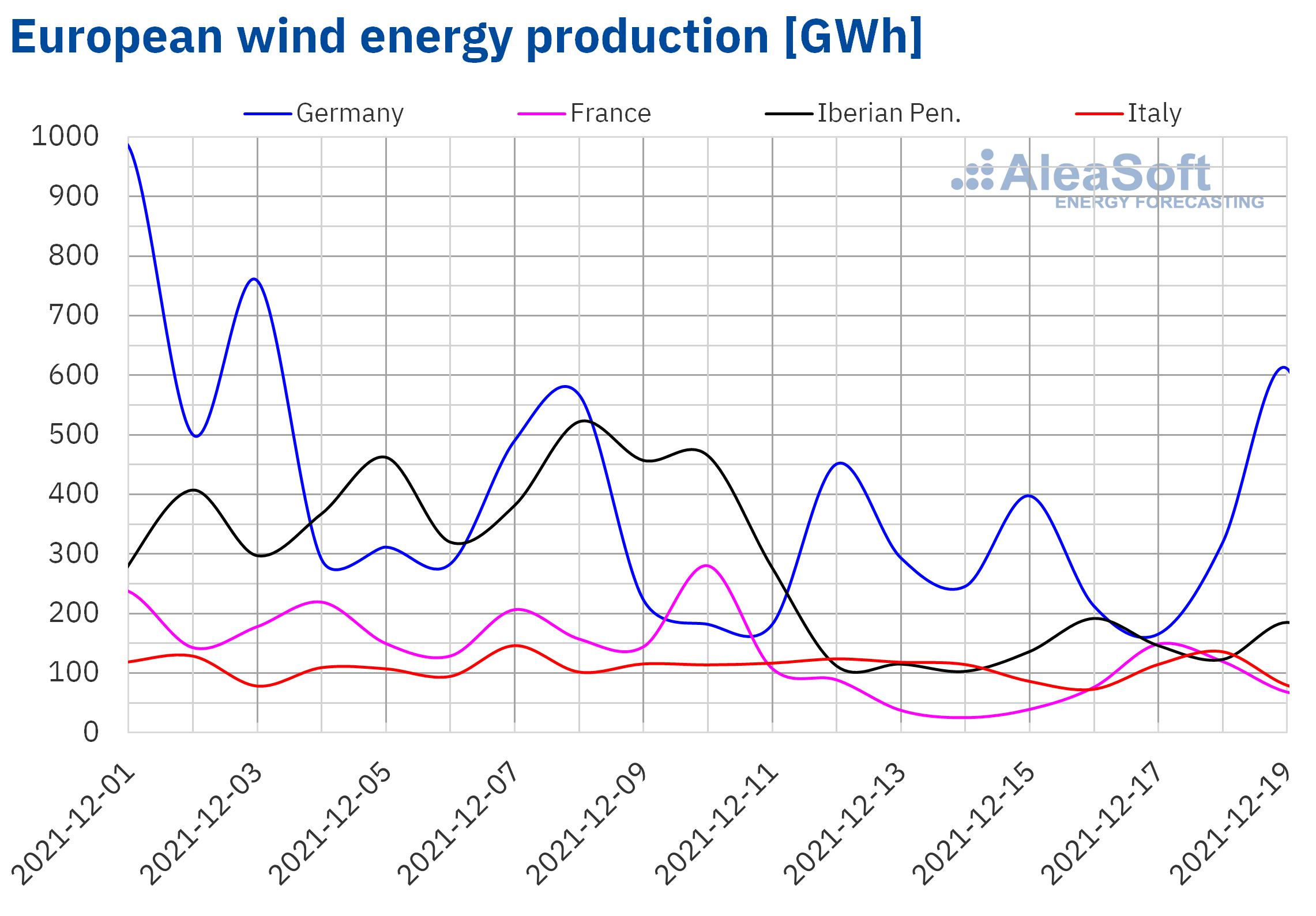 The electricity demand decreased in most of the European electricity markets during the week of December 13, compared to the previous week. The main cause of these falls was the increase in average temperatures in most markets, which increased to 4.1 °C in Germany. The decreases in demand were lower than 5.0% in all markets where there were decreases, with the most significant variations being registered in Portugal and Germany, which were 4.3% and 3.4%, respectively. On the other hand, in the Spanish market, the demand rose by 6.6%, and in the Italian market, by 2.8%.

The AleaSoft Energy Forecasting’s electricity demand forecasting indicates that average temperatures will drop in most markets and that there will be drops in demand in Spain, Germany and Italy. 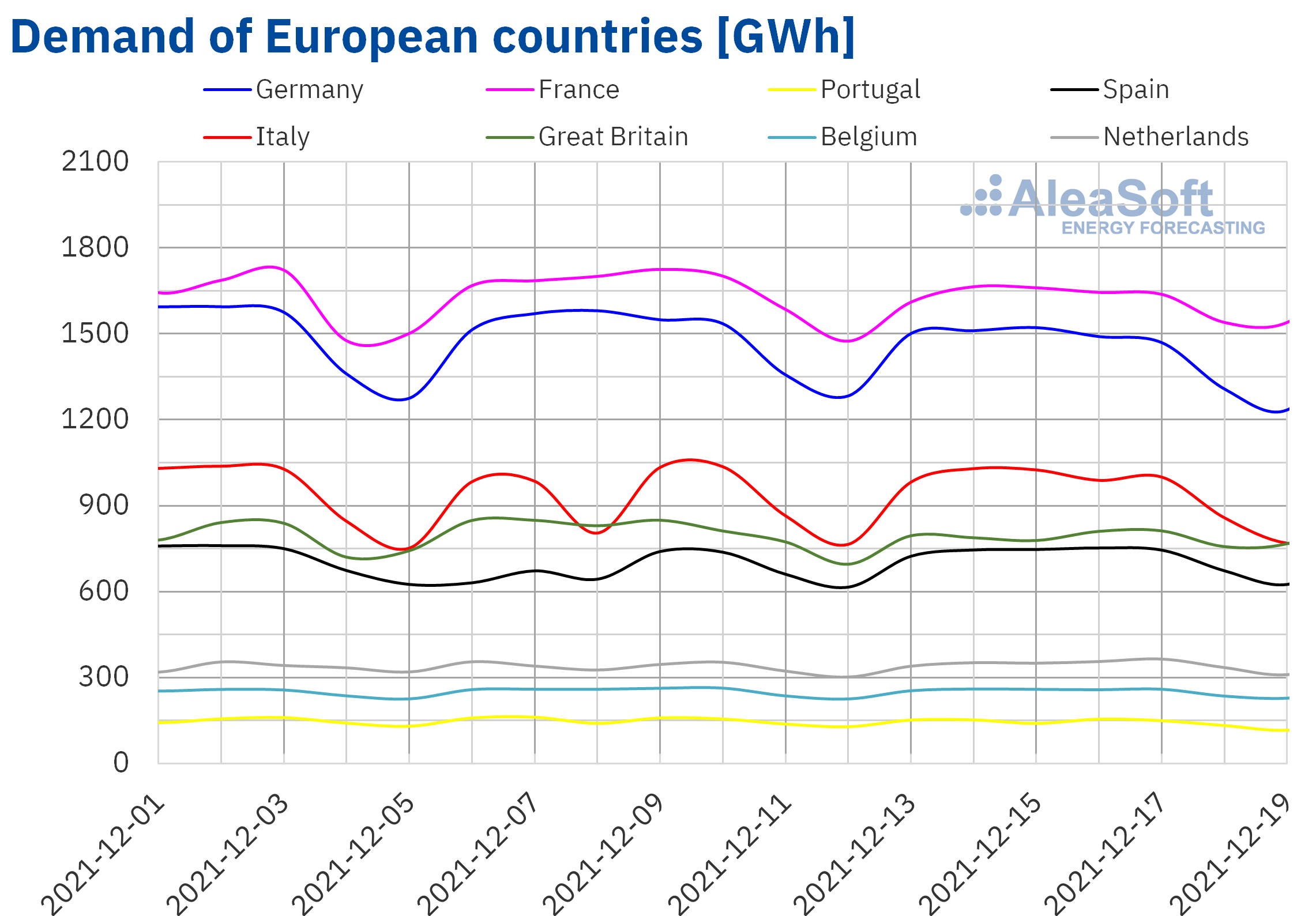 In the week of December 13, prices of almost all European electricity markets analysed at AleaSoft Energy Forecasting increased compared to the previous week. The exception was the Nord Pool market of the Nordic countries, with a 36% drop in prices. On the other hand, the largest rises were those of the MIBEL market of Spain and the N2EX market of the United Kingdom, of 44% in both cases, followed by the 43% increase of the MIBEL market of Portugal. In contrast, the lowest price increase was that of the EPEX SPOT market of Germany, of 20%. In the rest of the markets, the price increases were between 26% of the IPEX market of Italy and 33% of the EPEX SPOT market of the Netherlands.

In the third week of December, almost all analysed markets reached weekly average prices above €270/MWh. The exception was the Nord Pool market, which had the lowest average, of €103.15/MWh. On the other hand, the highest weekly average price, of €359.18/MWh, was that of the N2EX market. In the rest of the markets, prices were between €273.90/MWh of the German market and €332.79/MWh of the French market.

These daily price records also brought hourly price records. This is the case of the Spanish and Portuguese electricity markets, which registered a record price of €375.00/MWh between 8:00 p.m. and 9:00 p.m., of Monday, the 20th. In addition, fifteen of the nineteen most expensive hours in history of the Iberian market are of this Monday, December 20.

During the week of December 13, the general decline in wind energy production together with the rise in gas prices, due to tensions with gas supply from Russia, and high CO2 prices favoured price increases in the European electricity markets. The French nuclear energy availability situation also played a very important role in the latest price spike.

AleaSoft Energy Forecasting’s price forecasts indicate that in the week of December 20, prices might continue to increase in most European electricity markets, mainly favoured by the unplanned shutdowns of nuclear reactors in France and the upward trend of gas prices. However, in the MIBEL market there could be price declines favoured by a significant increase in wind energy production in the Iberian Peninsula and the increase in average temperatures in Spain and Portugal. 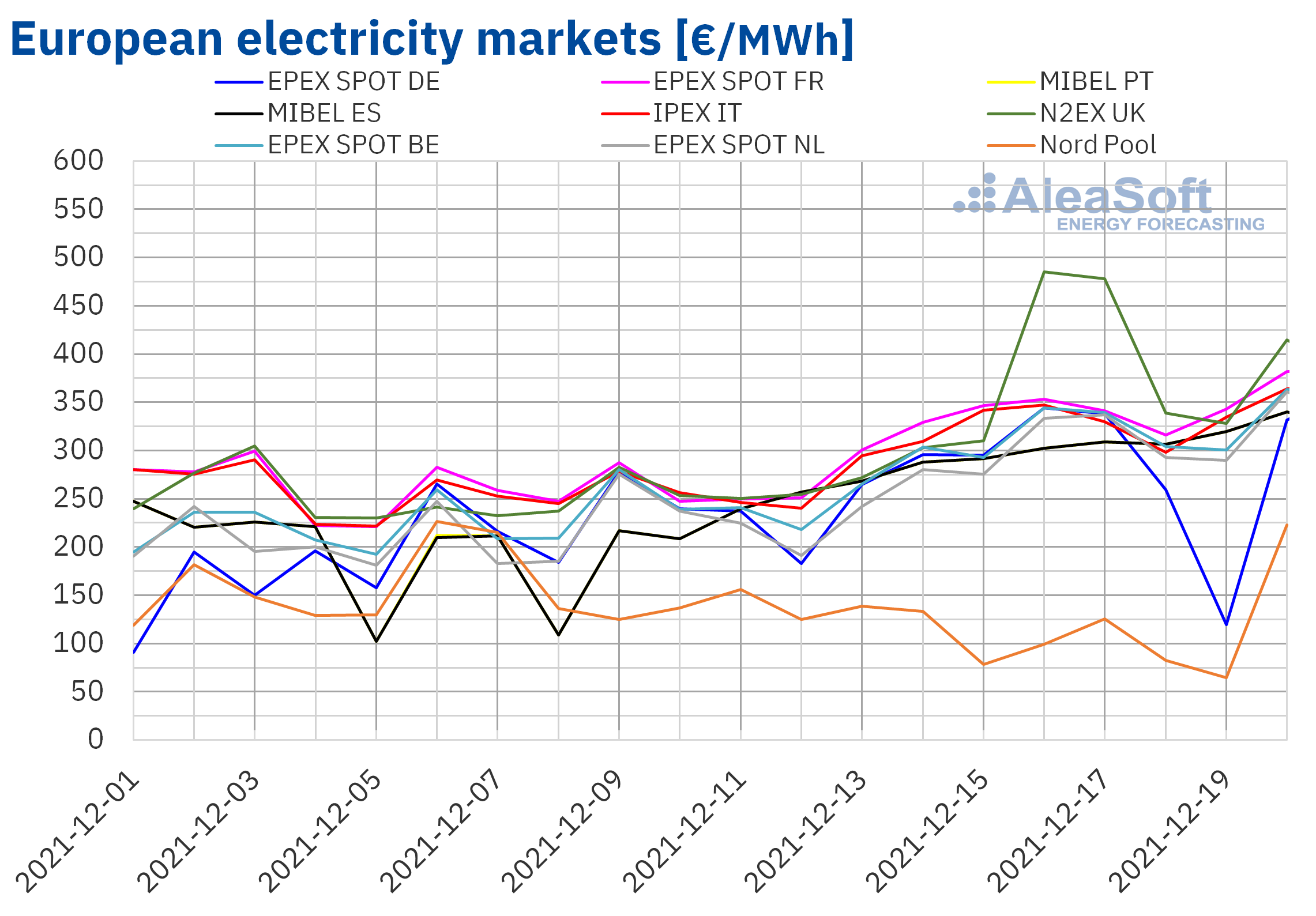 When making a comparison between the market sessions of Friday, December 10, and Friday, December 17, a general increase in electricity futures prices for the next quarter is observed in all European markets analysed at AleaSoft Energy Forecasting. The EEX market of France was the one with the highest increase with a rise of more than 61%, ending on Friday, December 17, with a settlement price of €534.82/MWh. On the other hand, the OMIP market of Spain and Portugal was the one that registered the lowest variation between these dates, with an increase of more than 25% in both countries.

This significant increase in electricity futures for the first quarter of France is mainly due to EDF’s recent announcement of the shutdown of two nuclear power plants in Chooz and Civaux. In times that were already tense, the shutdown of these reactors until spring raises concern, since these units represent 10% of the nuclear energy generation capacity in a country where this technology is responsible for covering more than half of the national demand.

Electricity futures prices for the year 2022 presented a similar behaviour, with increases that for these products were between just over 18%, the value registered in the EEX market of Italy, and just under 38%, which was the increase of the EEX market of France. In absolute terms, the ICE market of the Nordic countries and the NASDAQ market, also of the same region, were those with the lowest increase, with a difference of €12.73/MWh and €12.05/MWh, respectively.

Concern about the effects on demand of the expansion of the new variant of the coronavirus continues to exert its influence on prices. The increase in restrictions and confinements recently imposed in some countries might exert their downward influence on prices in the coming days.

As for TTF gas futures prices in the ICE market for the Front‑Month, during the third week of December they increased until reaching a settlement price of €142.76/MWh on Thursday, December 16. This price was 42% higher than that of the previous Thursday and the highest in at least the last eight years. On Friday, December 17, prices fell by 4.1% to €136.91/MWh, but this price was still 29% higher than that of the previous Friday.

Regarding CO2 emission rights futures in the EEX market for the reference contract of December 2021, during the third week of December they remained below €85/t. The lowest settlement price of the week, of €73.28/t, was registered on Friday, December 17. This price was 12% lower than that of the previous Friday. The proximity to the end of the negotiations for this product favoured the decrease in prices. 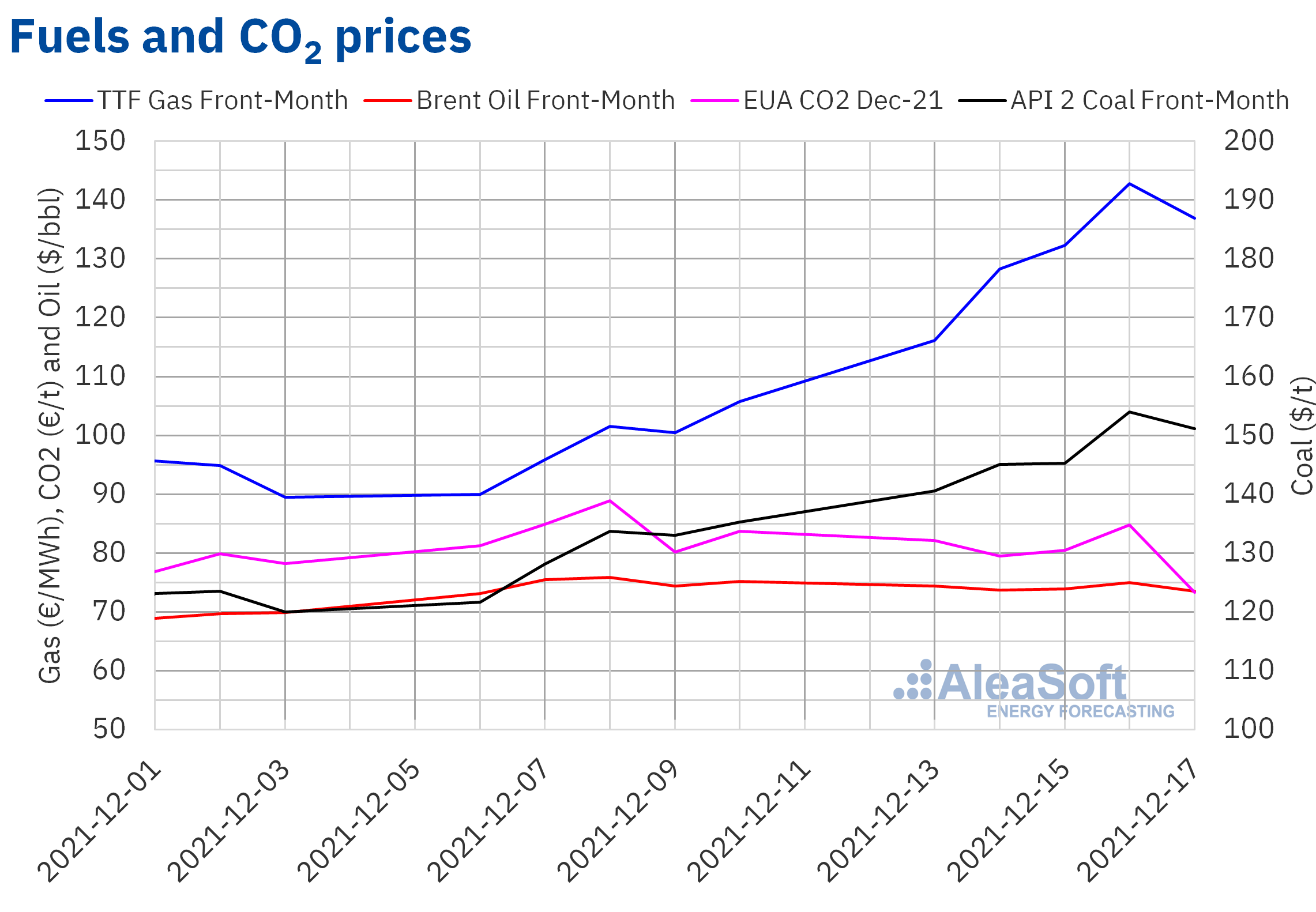 The evolution of energy markets in Europe and their expectations for 2022 will be analysed at the next webinar organised by AleaSoft Energy Forecasting, which will be the first of 2022 of its series of monthly webinars. On this occasion, the periodic review of the electricity, gas, CO2 and oil markets will focus on their evolution during the year 2021 in order to understand what is expected for 2022.

The webinar, which will take place on January 13 and for which the invitation can already be requested, will have the participation of speakers from PwC Spain who will provide their vision of the impact of the regulatory and electricity market situation on the renewable energy projects financing and in the development of PPA, both off‑site and on‑site.