AleaSoft Energy Forecasting, December 24, 2021. In the field of regulation, this 2021 was a year marked by attempts to protect consumers under the regulated tariff against the escalation of prices in the wholesale market. But it also was the year of the legislation for the energy transition with the Climate Change Law and the Roadmaps for storage, hydrogen and self‑consumption.

Previous publications already summarised what happened in this year 2021 in the field of renewable energies, specifically auctions, and large consumers of energy and electro-intensive. On this occasion, the most important changes and developments in the regulatory field of the electricity sector are summarised.

The race to protect consumers from rising prices

The last months of 2021 were a race of accidental and improvised steps to reduce the impact of the high prices of the MIBEL electricity market on the bill paid by final consumers. On October 14, Royal Decree‑Law 17/2021, which was approved by the Council of Ministers on September 14, was voted and validated in the Spanish Congress. This Royal Decree‑Law included several emergency measures, the most controversial was the mechanism for reducing the excess remuneration for high gas prices, which will be in force until March 31, 2022. 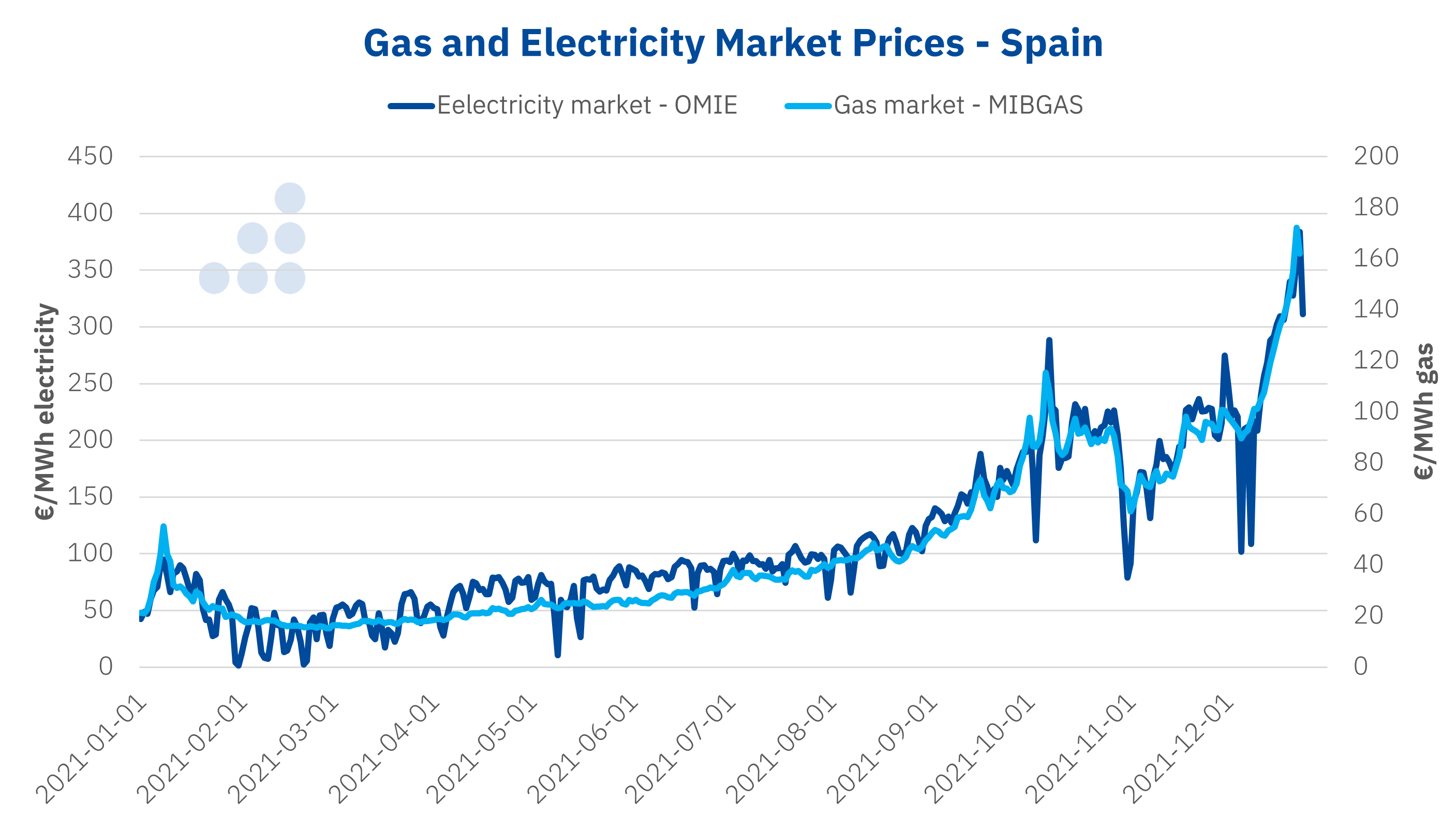 The mechanism for reducing remuneration excess, which is applied to infra‑marginal power plants in the peninsula, including renewable energy plants that do not receive a specific remuneration regime, generated a great stir in the sector from the outset. The clamor was so great that on September 21, the Ministry for the Ecological Transition and the Demographic Challenge published a clarifying note in which it specified that this reduction excludes the electric power covered by some term contracting instrument whose price is not indexed to the market price, but this only for contracts that are not signed between companies of the same group.

This clarification, which was not included in the text of the Decree‑Law that was finally approved, was not enough to calm the spirits of the sector, especially of the large vertically integrated companies that saw how they were left out of the exception. Ultimately, a regulatory change of this magnitude, which directly affected producers incomes, created enormous legal uncertainty that practically paralysed investments and jeopardised the energy transition.

Shortly after, Royal Decree‑Law 23/2021, of October 26, modified RDL 17/2021 to also include fixed‑price contracts within companies of the same group in the exemption from reduction. But, beyond clarifying the situation and calming down a bit, this new Royal Decree‑Law only contributed to accentuate the regulatory uncertainty for investments in Spain.

With the same objective of reducing the cost of the electricity bill to final consumers, in June the government presented a Law draft to act on the remuneration of CO2 not emitted from the electricity market. The intention of the Government is to cut the so‑called windfall profits, the profits that have fallen from the sky, to the oldest hydroelectric and nuclear plants that are considered amortised. The cut would affect hydroelectric and nuclear plants that should pay the costs of CO2 emission rights, although they do not emit CO2 or greenhouse gases. A proposal for a regulatory change of this magnitude already put all national and international investors on alert and shaken the legal and regulatory security of Spain.

But beyond the legislative patches, ambitious regulations also were approved in 2021 aiming the energy transition and long‑term environmental goals. In this regard, the most relevant thing was the approval of the Climate Change and Energy Transition Law. The text aims to shield Spain’s commitment to meeting the objectives of the Paris Agreement and to put the objectives of reducing greenhouse gas emissions in 2030 on track to achieve climate neutrality before 2050.

During 2021, long‑term plans were also approved within the framework of the energy transition, such as the Energy Storage Strategy, the Hydrogen Roadmap, the Self‑consumption Roadmap and the Roadmap for the development of Offshore Wind Energy and of the Energies of the Sea.

In this same direction, on December 14, the Government approved the Strategic Project for the Recovery and Economic Transformation (PERTE by its acronym in Spanish) of Renewable Energies, Renewable Hydrogen and Storage (ERHA) as a tool of the Recovery, Transformation and Resilience Plan (PRTR by its acronym in Spanish). There are many acronyms, but this plan plans to allocate more than 16 billion euros to maximize economic, industrial, labour, and innovation opportunities for Spanish companies in the energy transition.

Regulatory changes can have a significant impact on the perception of country risk for international investors. Given that foreign investment will be essential to achieve the objectives of the NECP, it is very important to maintain a perception of regulatory stability and to have a long‑term vision and reliable and consistent electricity market price forecasts.

The impact of the current regulatory situation on the development of PPA, both offsite and onsite and in the renewable energy projects financing will be analysed by the invited speakers of PwC Spain in the next webinar organised by AleaSoft Energy Forecasting, which will be the first of 2022 of its series of monthly webinars, and which will also analyze the evolution of energy markets in Europe in recent months.

PrevAnterior2021 does not stop surprising and in the last weeks price records continue to be beaten in the markets
SiguienteOn vespers of Christmas, record prices were registered in European electricity marketsNext
Menu
Facebook-f Twitter Linkedin Instagram