2021: Year of recovery and records in European energy markets

AleaSoft Energy Forecasting, January 4, 2022. After the declines of 2020, the demand and prices of the energy markets recovered in 2021, the latter leading an escalation that made almost all European electricity markets settle with a yearly price of more than €100/MWh and break hourly and daily historical records repeatedly. Behind these increases are gas and CO2 prices that also marked historical highs. Renewable energy production increased in most markets.

During 2021, the solar energy production increased compared to 2020 in most of the European markets analysed at AleaSoft Energy Forecasting. The exception was the Italian market, where the production with this technology fell by 1.1%. On the other hand, the largest increases were those of Portugal, of 38%, and Spain, of 28%. By contrast, the production increases were more modest in France and Germany, of 10% and 1.7% respectively. However, in 2021, Germany continued to be the market with the highest solar energy production, with 46 654 GWh. 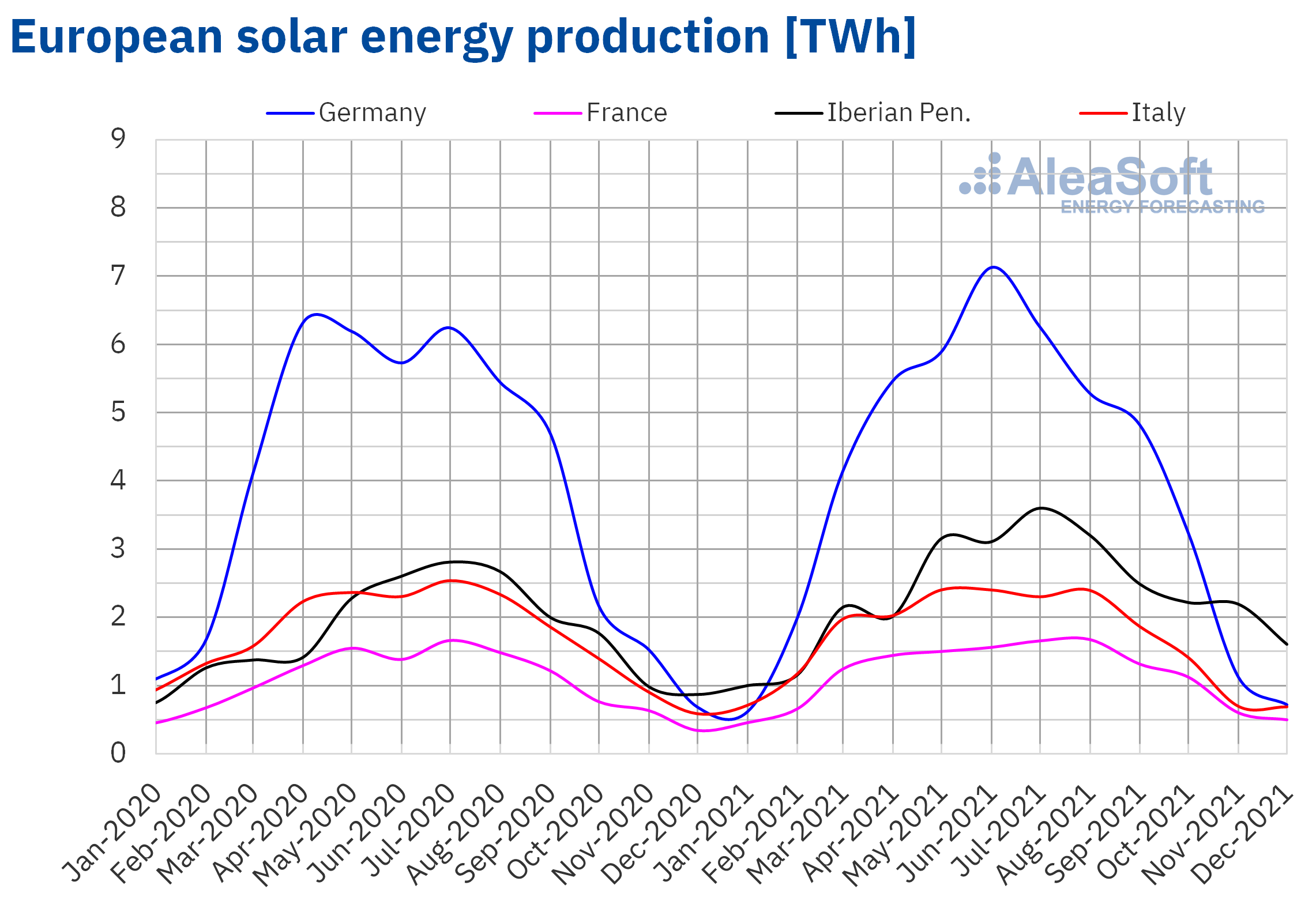 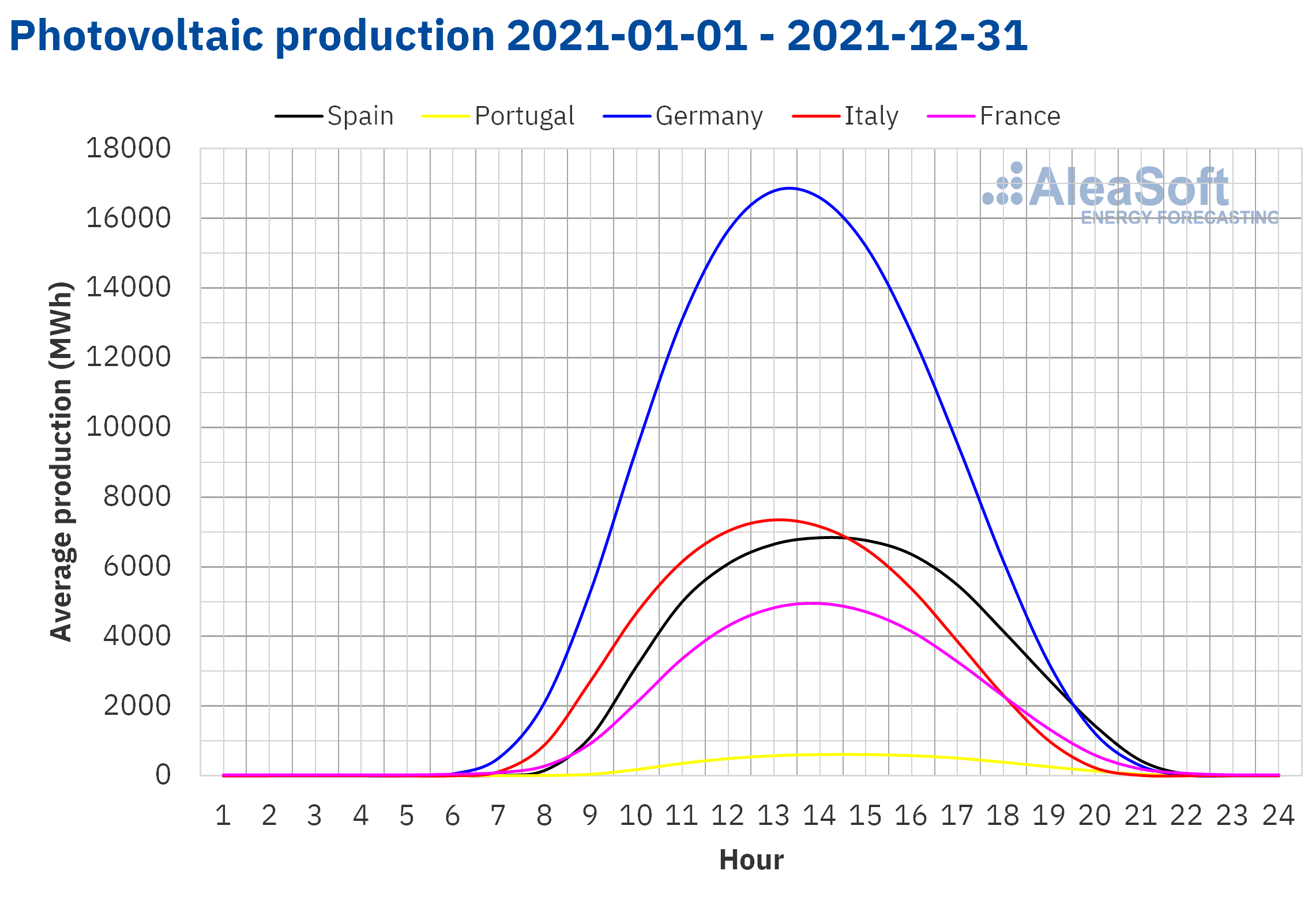 In the case of the wind energy production, in 2021, it fell in the German and French markets by 13% and 8.3% respectively. On the other hand, the production with this technology increased in Spain, by 11%, and Italy, by 10%. It also increased, although to a lesser extent, in Portugal, by 5.4%. 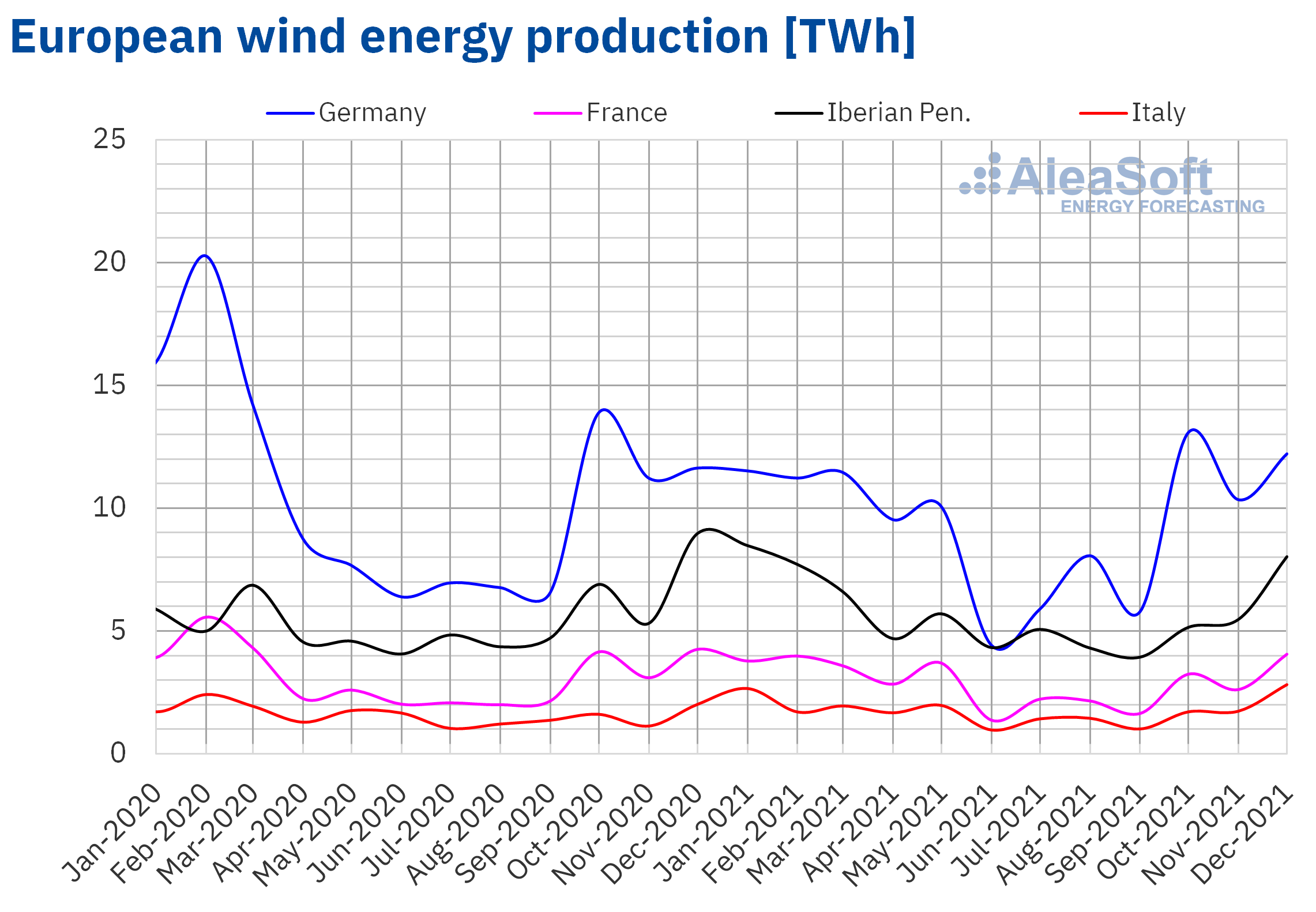 The recently concluded 2021 was a year in which the demand of almost all analysed countries increased compared to 2020. The exception was the Netherlands, where the yearly demand fell by approximately 1.8 TWh, which represents a decrease of 1.6%. The country where the demand increased the most was Italy, with an increase of 5.5%.

If analysed on a monthly basis, the highest year‑on‑year growth is concentrated in the months of the second quarter. This is due to the fact that these were precisely the months in which confinements were decreed in 2020 in most European countries, causing a drop in electricity demand. This occurred even despite the fact that in April 2021 the behaviour of temperatures led to a decrease in demand compared to the previous month of between 15% and 25% in all analysed markets. 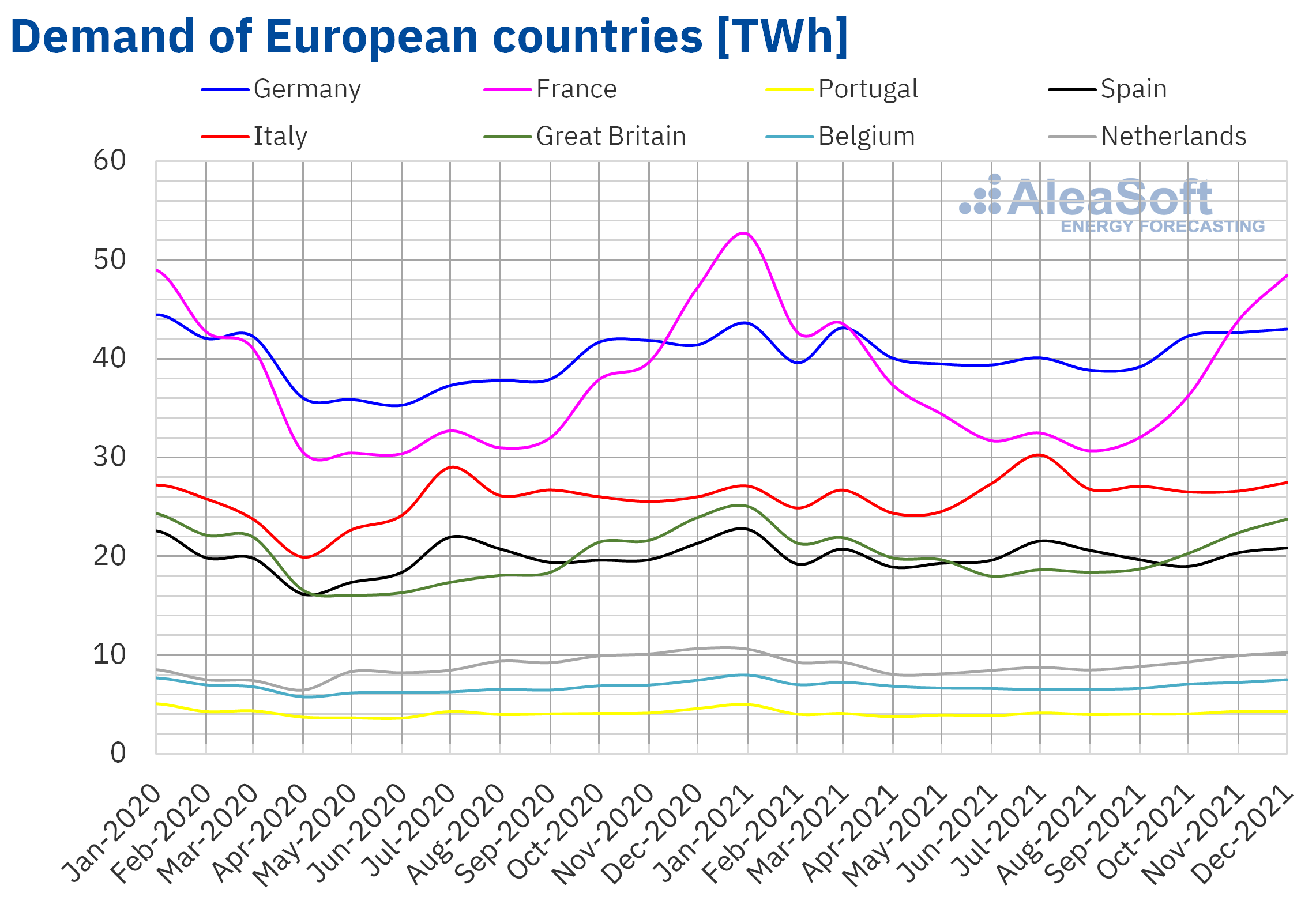 Without a doubt, the protagonists of 2021 in the energy sector were electricity markets prices, always with the permission of gas and CO2 emission rights prices. For both spot markets and futures markets, the headline that was repeated the most was “record”, because the rise in prices was practically constant from February to December, and from August the historical highs began to be exceeded almost continuously until practically the last days of December.

Additionally, 2021 comes after 2020, which was a year of extraordinarily low prices caused by the restrictions due to the COVID‑19 pandemic. So, when comparing prices of 2021 with those of 2020, the growth rates are spectacular. In all analysed European markets, prices in 2021 more than tripled compared to 2020.

The most pronounced price growth was registered in the Nord Pool market of the Nordic and Baltic countries, with a growth of 470%. This is almost six times the price of 2020. Even so, it was the market with the lowest average price in Europe in 2021, with €62.31/MWh, a fact that explains why the percentage growth was so high, although the difference with the average price of 2020 was €51.39/MWh, clearly below the differences in the rest of the markets.

In this market, the northernmost on the continent, in 2021 both the record for the maximum hourly price, with €420.03/MWh, and the record for the maximum daily price, with €309.78/MWh were broken, both registered during the last month of the year. It should be noted that the 199 hours with the highest price since at least 2011 in this market all belong to the year 2021, as well as the 46 days with the highest prices.

In the rest of markets, the price increase was around 230%, specifically between 218% of prices in the EPEX SPOT market of Germany and 248% of those of the British N2EX market.

In 2021, price records were broken in practically all European electricity markets. The markets of the centre of the continent already registered episodes of very high price peaks in the past, so that in some of them no new records were registered. In the French market, for example, hourly prices did not exceed the peaks registered in 2009, but the second to fifth highest daily price occurred in 2021. In Germany, the hour with the highest price in 2021 is not up to position 19 in the historical ranking, but the 16 days with the highest average price are from the last year. Similarly, the Belgian market did not break the record for hourly prices, but it broke records for daily prices, all in December.

Halfway between the extremes is the British market, which ranked 23 hours of 2021 as the most expensive in its market and 77 days with the highest average price in the series.

This situation of extremely high prices was mainly caused by gas and CO2 emission rights prices. These two factors practically eclipsed the rest of variables with influence on electricity markets prices. The only exception were the low temperatures during Storm Filomena, which had an impact mainly on Iberian market prices, and the combination of low demand and high wind energy production that caused temporary, but very important, price drops in the Iberian market during the month of December. 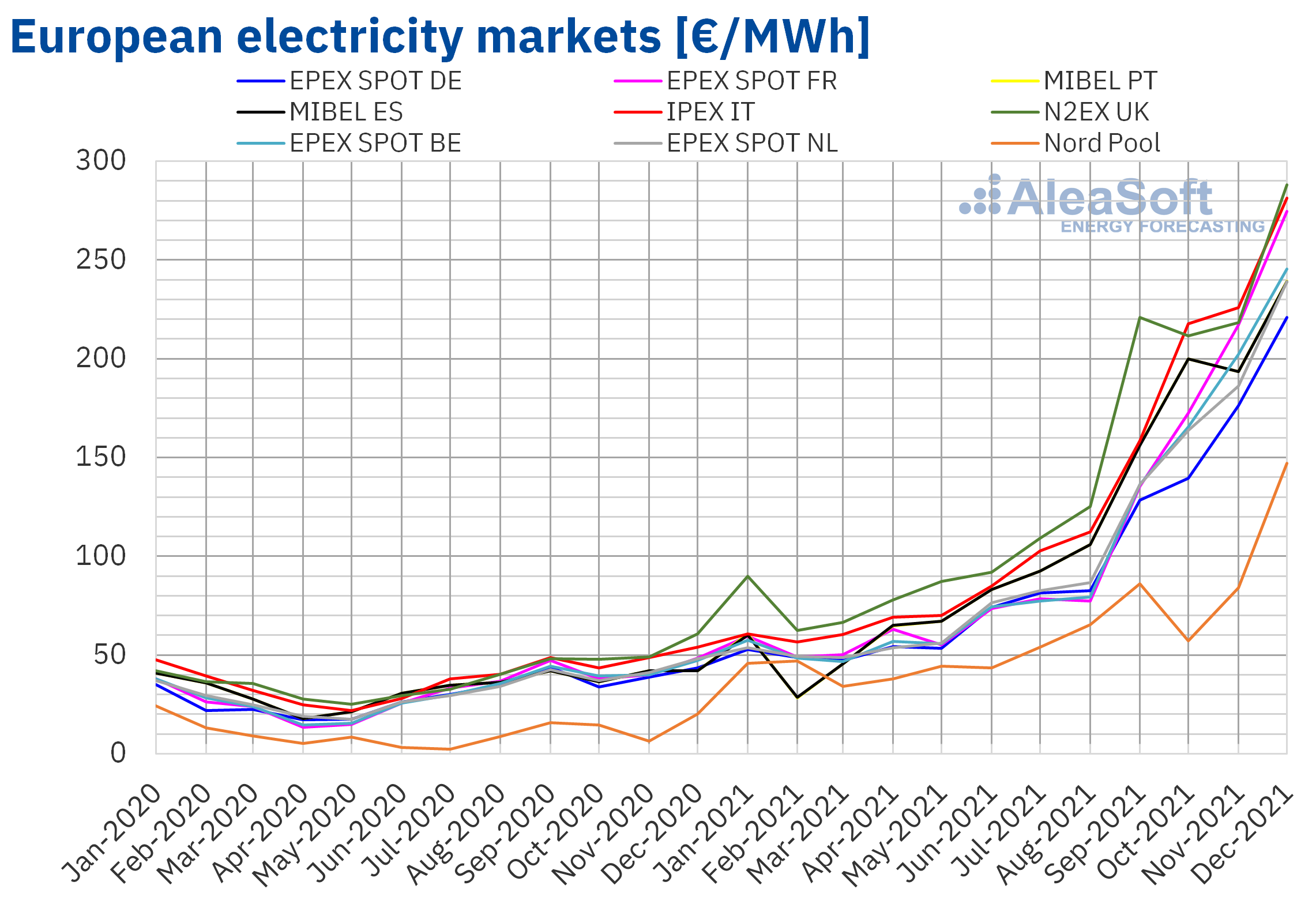 During the year 2021, electricity futures prices for the year 2022 registered a marked upward trend, which was accentuated in the last quarter of the year and mainly in the last month. In the last week of the year, prices for this product in all European futures markets analysed at AleaSoft Energy Forecasting fell, returning to the values of the beginning of December. In general, in the analysed markets, the increases throughout the year were around 275% on average.

The EEX market of France was where the greatest increase between the first and last sessions of 2021 was registered, with a difference of €198/MWh that represented an increase of 385%. The root cause of this rise, in addition to gas and CO2 emission rights prices, in the French case is the shutdown of nuclear power plants at a time when national demand is high due to low temperatures of winter. This situation caused the EEX market of France to register prices for the Cal‑22 product higher than €300/MWh.

On the other hand, the ICE market of the Nordic countries registered the most stable behaviour of all during the year. Its increase between the first and last sessions was €27.28/MWh. The Nordic region benefits from having a production mix where generation technologies from fossil fuels have a moderate participation. 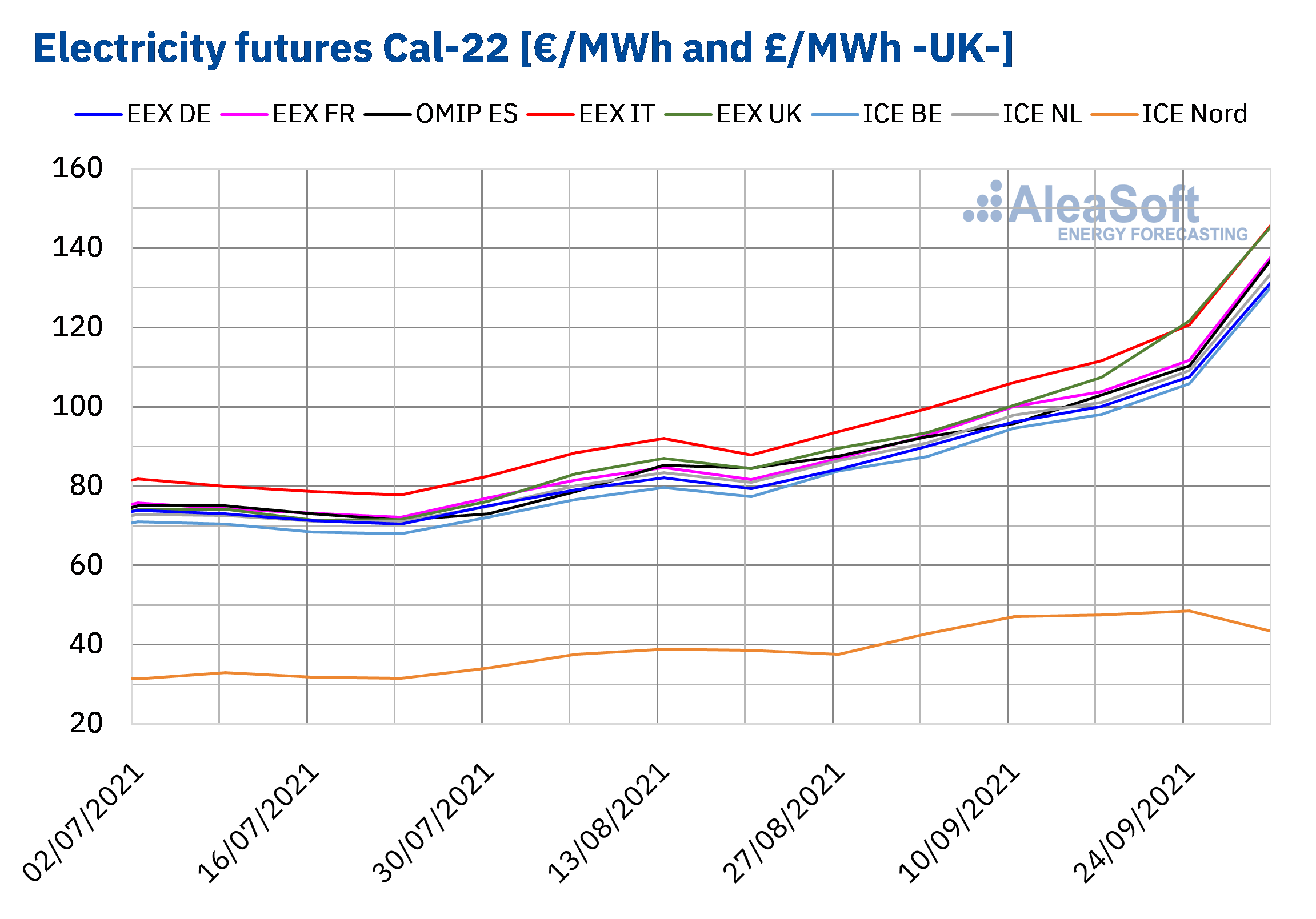 During the year 2021, Brent oil futures prices for the Front‑Month in the ICE market recovered from the falls registered in 2020, reaching an average price of $70.75/bbl. This figure represents an increase of 64% compared to the average reached by Front‑Month futures of the previous year.

In 2021, the advance in vaccination contributed to the control of the COVID‑19 pandemic and the recovery in demand favoured the increase in prices, despite the progressive increase in OPEC+ production. The yearly maximum settlement price, of $86.40/bbl, was reached on October 26 and was the highest since October 2014.

However, the upward trend in prices halted in November and December due to the increase in infections by coranavirus and the recovery of mobility restrictions in many countries.

At the beginning of the year 2022, concerns continue about the effects of the pandemic on demand due to the expansion of the Omicron variant of the coronavirus, more contagious. But January begins with production declines in Libya.

While waiting for the next OPEC+ meeting, in the session of Monday, January 3, prices were most of the time between $78/bbl and $79/bbl and finally settled at $78.98/bbl. The OPEC+ meeting is scheduled for January 4, 2022 and the increase in production from February will be decided in it.

As for TTF gas futures prices in the ICE market for the Front‑Month, during the year 2021, they increased until reaching an average price of €47.25/MWh. This average was 392% higher than that of the Front‑Month futures traded in 2020, of €9.60/MWh, and the highest in, at least, the last eight years.

The year 2021 began with price rises due to episodes of low temperatures and the high demand in Asia. Although this trend later came to a halt, the increase in demand and the low levels of the reserves favoured that, in general, prices rose rapidly during the last three quarters of 2021. The exception was the month of November, when expectations of adequate levels of gas supply from Russia during the winter favoured the decline in prices. But difficulties in the certification process of the Nord Stream 2 gas pipeline, the progressive decrease in temperatures and geopolitical tensions led prices to rise again. As a consequence, an average of €116.82/MWh was reached in December. This was the highest monthly average in, at least, the last eight years, exceeding €100/MWh for the first time.

On the other hand, the yearly maximum settlement price, €180.27/MWh, was reached on December 21 and it was the highest since at least October 2013. However, mild temperatures and the arrival of liquefied gas shipments from the United States favoured the decline in prices in the last days of the year.

Regarding CO2 emission rights futures prices in the EEX market for the reference contract of December 2021, during the past year they increased until reaching a yearly average price of €53.41/t. This average was 116% higher than the average registered for these futures in 2020, of €24.78/t. The recovery in demand and the speculation existing in the market favoured the increase in CO2 emission rights futures prices. These rises led to a settlement price of €88.88/t on December 8, which was a historical record. But, subsequently, the proximity to the end of the negotiations of these futures favoured the decrease in prices. 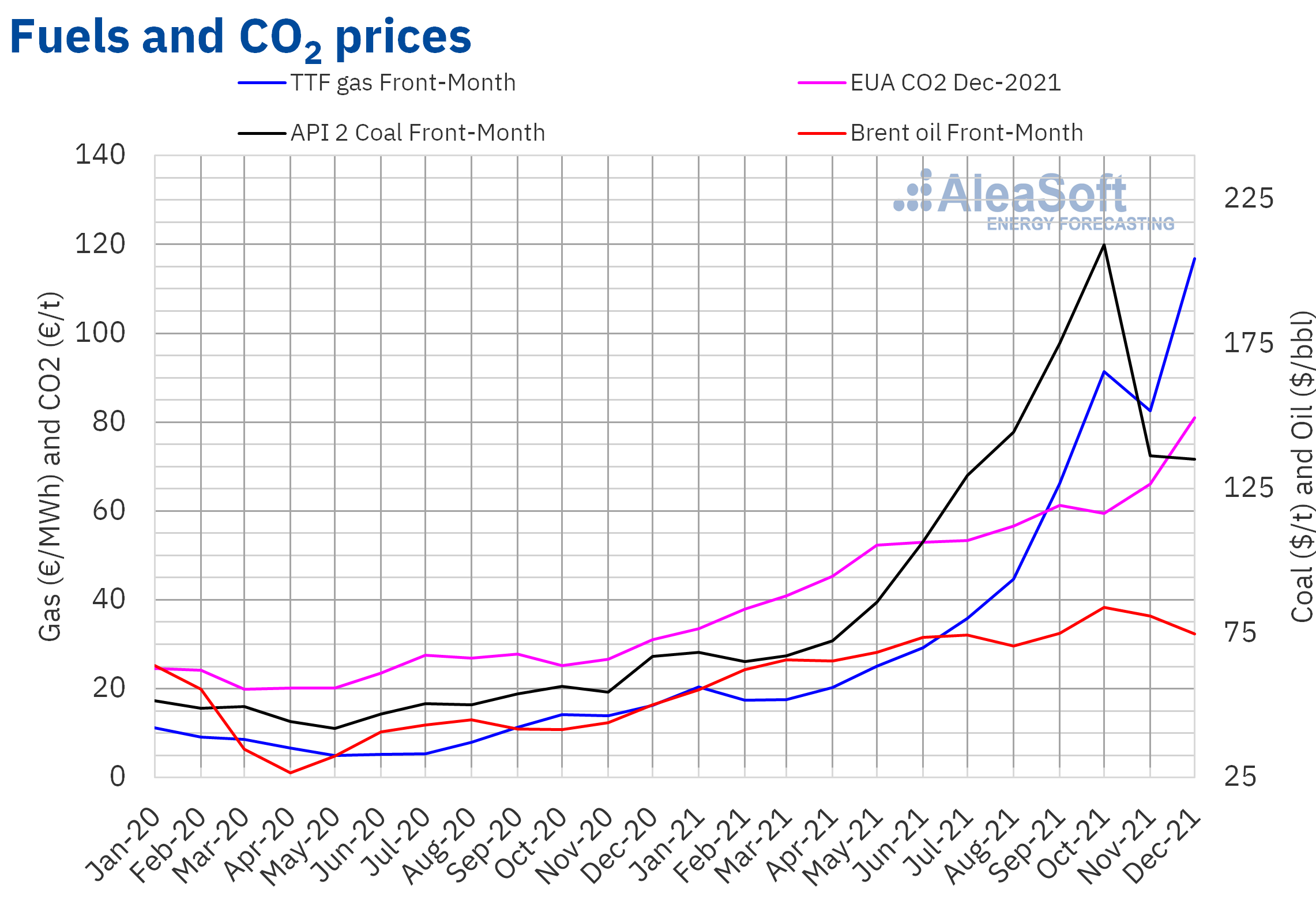 In times of macrovolatility and instability in the energy markets, the need to have a strategy for both the purchase and the sale of energy based on a vision of the future of the energy markets based on price forecasting in all horizons is more palpable. A robust strategy based on scientific and reliable forecasts allows the protection against adverse markets situations and taking advantage of favourable price situations.

The evolution and prospects of the energy markets in Europe will be analysed in the first webinar of 2022 organised by AleaSoft Energy Forecasting, within its series of monthly webinars on current affairs and topics of interest for professionals of the energy sector. The webinar will take place on Thursday, January 13, and will be attended by invited speakers from PwC Spain to analyse the impact of the current regulatory situation on the development of PPA, both offsite and onsite, and on the renewable energy projects financing in general.