The change of price forecasting needs of the renewable energy plants

AleaSoft, February 12, 2021. It is difficult to deny that Spain is in the throes of the outbreak of a second renewable energy revolution. As new projects develop and enter the wholesale electricity market, their market price forecasting needs change. If previously only long‑term forecasts were needed to plan the investment, now short and mid‑term forecasts are also needed to sell the energy in the pool or in the futures markets.

Spain is at the beginning of its second renewable energy revolution. Between 2013 and 2018, the renewable energies suffered the so‑called “crossing of the desert”. During these six years, just 273 MW of wind energy and 67 MW of photovoltaic energy were installed. This represents a growth in installed capacity of only 1.2% and 1.5%, respectively … in six years.

Comparatively, since the beginning of 2019, 3.7 GW of wind energy was already installed in the peninsular territory, corresponding to an increase in capacity of 16%. For the photovoltaic energy, the numbers are even more impressive: 6.8 GW installed and a growth of 153%. Taking into account these numbers, the consensus is unanimous, we are facing a revolution of the renewable energy in Spain.

And it should come as no surprise if the renewable energy capacity objectives set out in the NECP are targeted. To reach 50 GW of installed wind energy capacity in 2030, the annual rate of new capacity must be around 2.3 GW. For the photovoltaic energy, the numbers are of the same order: 39 GW of target for 2030, for which an annual growth of 2.8 GW is needed. 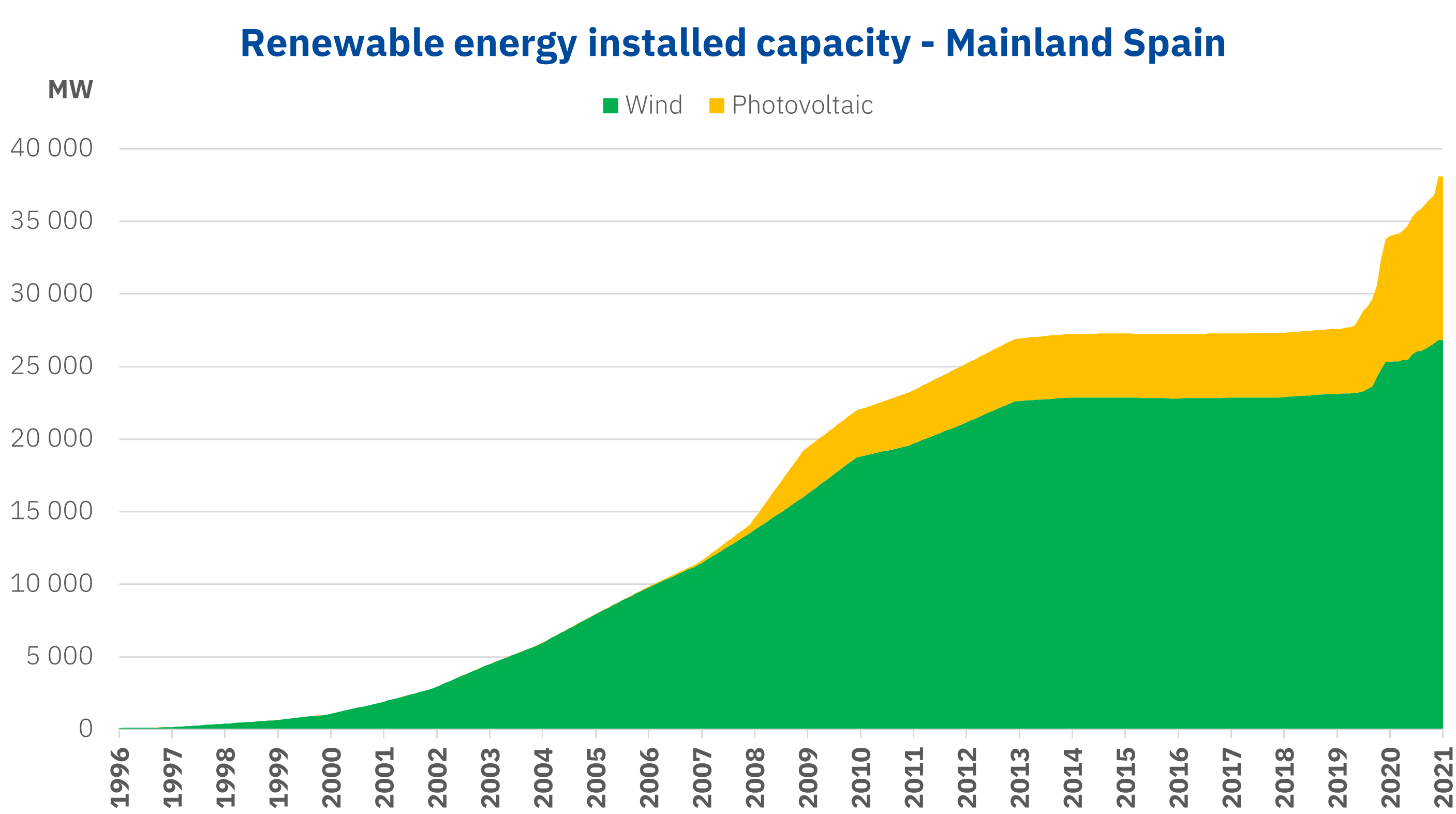 The needs of the renewable energy projects

This revolution of the renewable energy became evident in mid‑2019 when the installed capacity of wind and photovoltaic energy began to grow after the lethargy of the crossing of the desert. But for this, it needed to begin to develop many months before. In 2018, after the last renewable energy auctions of 2017, the sector was already boiling. It was time to plan, adjust business models, financial models, seek financing and negotiate PPAs.

All these initial stages of development of projects of generation facilities with renewable energy technologies are focused on the long term, in determining what is expected during the entire lifetime of the facility. This is confirmed by the AleaSoft specialists. The number of inquiries and requests for long‑term market prices reports increased significantly during 2018.

Virtually all of the first steps in the planning of a new renewable energy generation facility require a long‑term market vision to estimate the revenue for financial models, either to seek financing or to negotiate a PPA. The market prices forecasts required in most cases are thirty‑year forecasts with hourly granularity, so that it is possible to determine the price captured by each technology and each specific plant from a production profile.

The change of needs of the renewable energy plants

As the renewable energy projects that began to be developed in 2018 entered the market, their needs changed. According to AleaSoft, although the interest in the long‑term prices reports continues to be very lively and growing, all these new renewable energy facilities that are coming into operation need short and mid‑term prices forecasts to manage their energy sales strategy, either to the spot market, to the futures market or with bilateral contracts or PPA.

The short and mid‑term prices forecasts are services that AleaSoft offers since its creation in 1999, coinciding with the liberalisation of the Spanish electricity market, but now, with the entry of several tens of renewable energy projects in operation, the request of short and mid‑term forecasting services increased.

The third part of the webinar series “Prospects for the energy markets in Europe from 2021” is scheduled for Thursday, February 18. The event organised by AleaSoft will have the participation of speakers from ENGIE, to analyse the prospects of the energy markets and the financing of the renewable energy projects from this 2021. Later, the fourth part of the series of webinars is scheduled for March 18 and will feature the collaboration of speakers from EY (Ernst & Young).

At AleaSoft a wide variety of reports for the energy sector that cover the main markets in Europe are also available. In addition, new complementary services associated with the long‑term prices curves reports are also offered to advise on their use.