Climate change and energy markets in the mid term

AleaSoft, December 22, 2020. The effects of climate change can already be clearly perceived. Beyond the climate, they are beginning to affect the weather, the economy, the quality of life and a host of aspects of which it is difficult to get a clear idea. Energy markets are not an exception, and they also suffer from its influence. Seasonal forecasting points to a dry winter in the Mediterranean and a rainy season in central and northern Europe.

Without trying to be a rigorous study of the effects of climate change, a certain tendency to increase in temperatures can be observed in the last twenty or thirty years, looking at the annual evolution of AleaSoft‘s temperature index in peninsular Spain. An increase in temperature means warmer summers and less cold winters. These changes in temperature influence the volume of electricity consumption, but also its distribution throughout the year, shifting part of the heating consumption from winter to demand for air conditioning in summer. 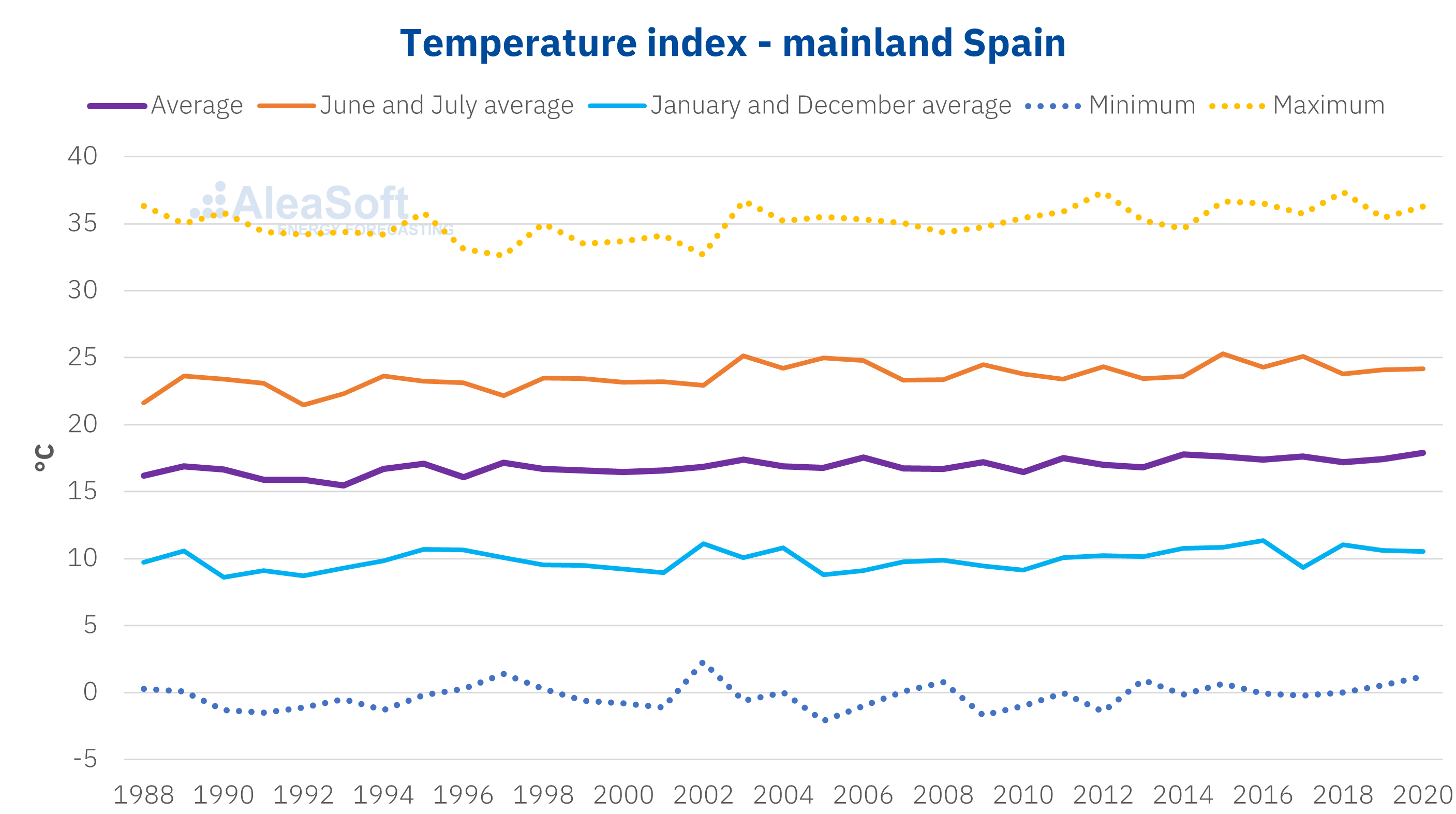 An increase in the number and duration of droughts, but also in concentrated rainfall in a short time that leads to episodes of storms and floods is also described as a consequence of climate change. Altogether, an increase in the frequency and magnitude of extreme weather events. Not wanting to be a scientific proof of the effects of climate change either, a greater variability of hydroelectric energy production in Europe in the last twenty years can be noticed. 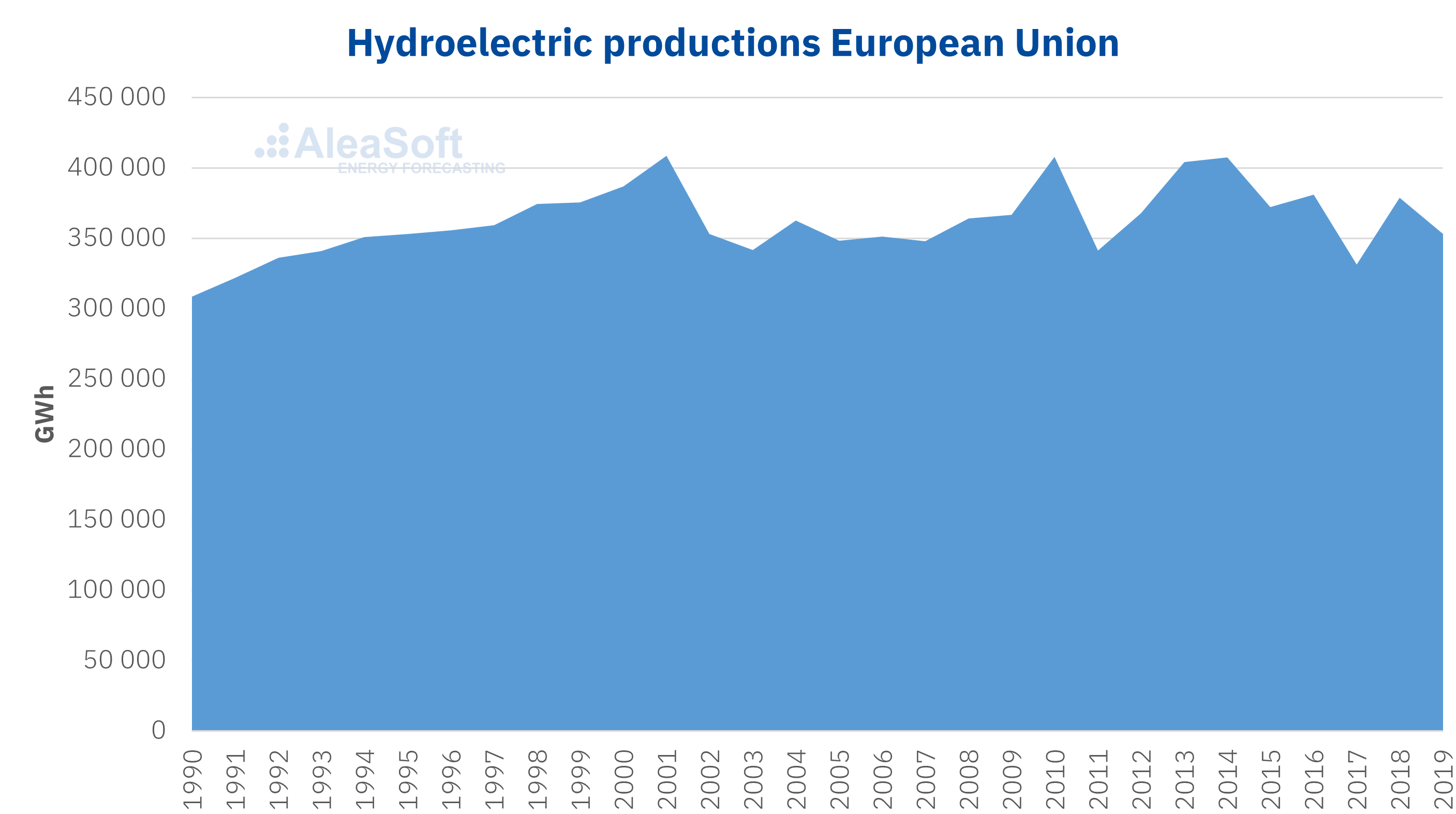 Some studies suggest that climate change could make global meteorological phenomena such as El Niño or La Niña more frequent. An extreme case that is indicated as a possible consequence of the increased frequency of La Niña is the prolonged period of ten consecutive years of drought that Chile is experiencing.

It is not clear how these phenomena originating in the southern hemisphere can affect the climate and meteorology in Europe, but there are some indications that associate it with very rainy winters and springs in northern Europe and more droughts in the Mediterranean.

The mid-term precipitation forecasting points to a dry winter in the south of the European continent. This situation of rainfall below historical values would mainly be present the Iberian Peninsula, but it would also affect the south of France, the Italian peninsula and even Greece. This situation of lower rainfall and, consequently, lower hydroelectric production is usually associated with higher prices in the electricity markets.

On the contrary, the situation in the centre and north of the continent could be of a season that could be wetter than the historical average. If this difference occurs between north and south, the global flow of electricity interconnections would clearly be from the north, with more hydroelectric energy production and lower prices, to the south, with less hydroelectric energy production and higher prices.

Long-term analysis of the evolution of energy markets in Europe

At AleaSoft, market reports for the energy sector are available, which include detailed analysis of all the aspects that influence the energy markets, as well as energy price forecasting for all horizons.

AleaSoft also regularly organises series of webinars to analyse the evolution of energy markets in Europe and other interesting aspects for professionals in the sector. The next webinar will take place on January 14 and will have the participation of speakers from the consulting firm PwC Spain, to analyse the status and vision of the PPA contract market for large consumers, its impacts and requirements, and the need for price estimates of the future electricity market.

PrevAnteriorThe outlook in the energy markets calms down for the last weeks of the year
Siguiente2020: The year the energy sector in Europe showed its strengthNext
Menu
Facebook-f Twitter Linkedin Instagram