2020: The year the energy sector in Europe showed its strength

AleaSoft, December 28, 2020. A summary of the energy markets in 2020 could have many possible headlines, all of them equally impressive. Among them, we could highlight the increase in photovoltaic capacity in Spain, the fall in electricity, gas and CO2 prices during the most critical episodes of the COVID‑19 pandemic, or the escalation in the futures market prices at the end of the year. Altogether an exceptional year that showed the resilience and robustness of the energy sector in Europe.

The solar energy production increased during 2020 in all the markets analysed at AleaSoft compared to 2019. With still provisional data, the highest production growth was registered in the Spanish market and it was close to 38%. This was associated with an increase in solar photovoltaic installed power from 8666 MW in 2019 to 10182 MW until November 2020. In the Portuguese market there was an increase in production close to 19%, while in the Italian market it grew by approximately 13% compared to the previous year. In the cases of the German and French markets, the growth was close to 9%. 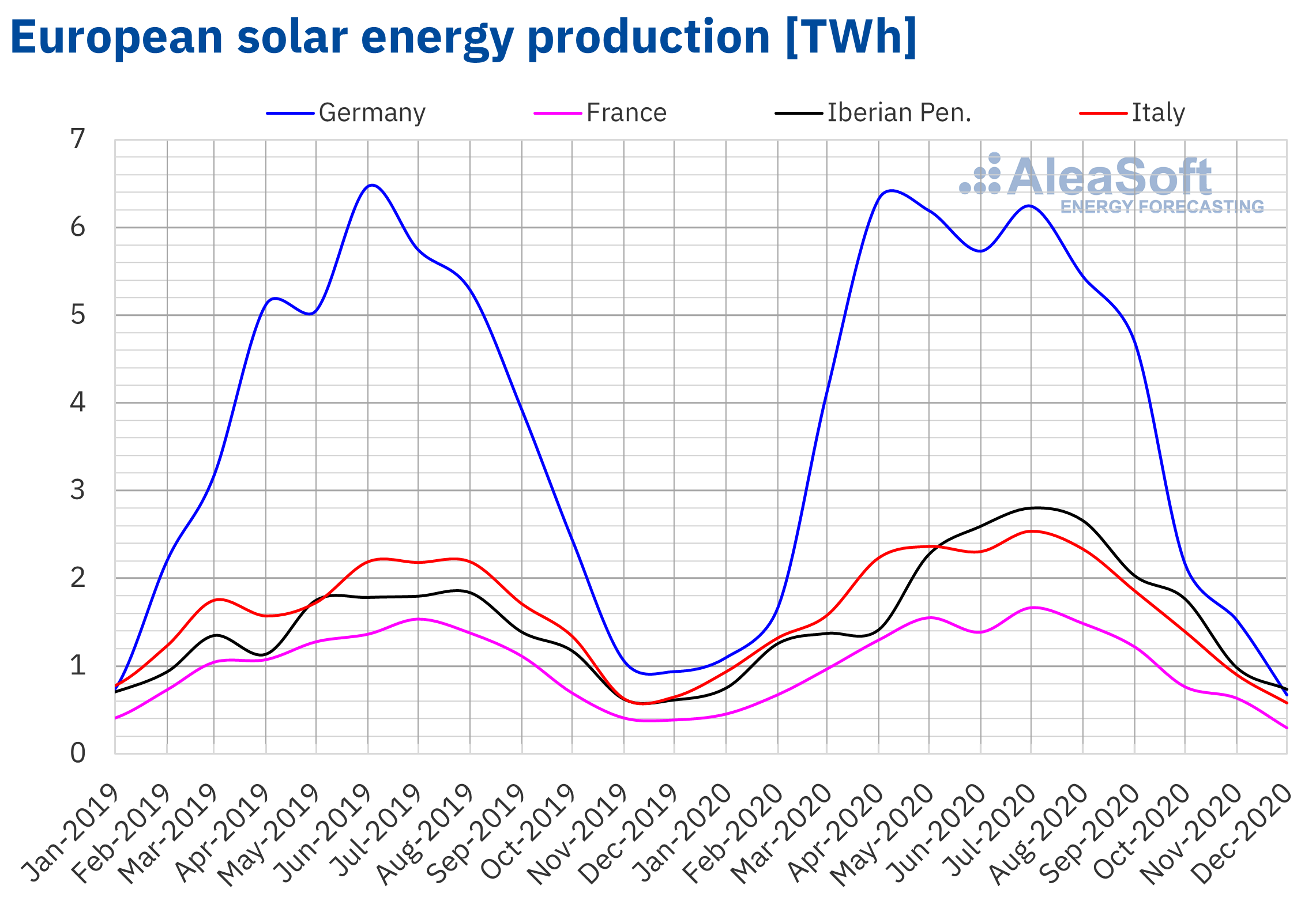 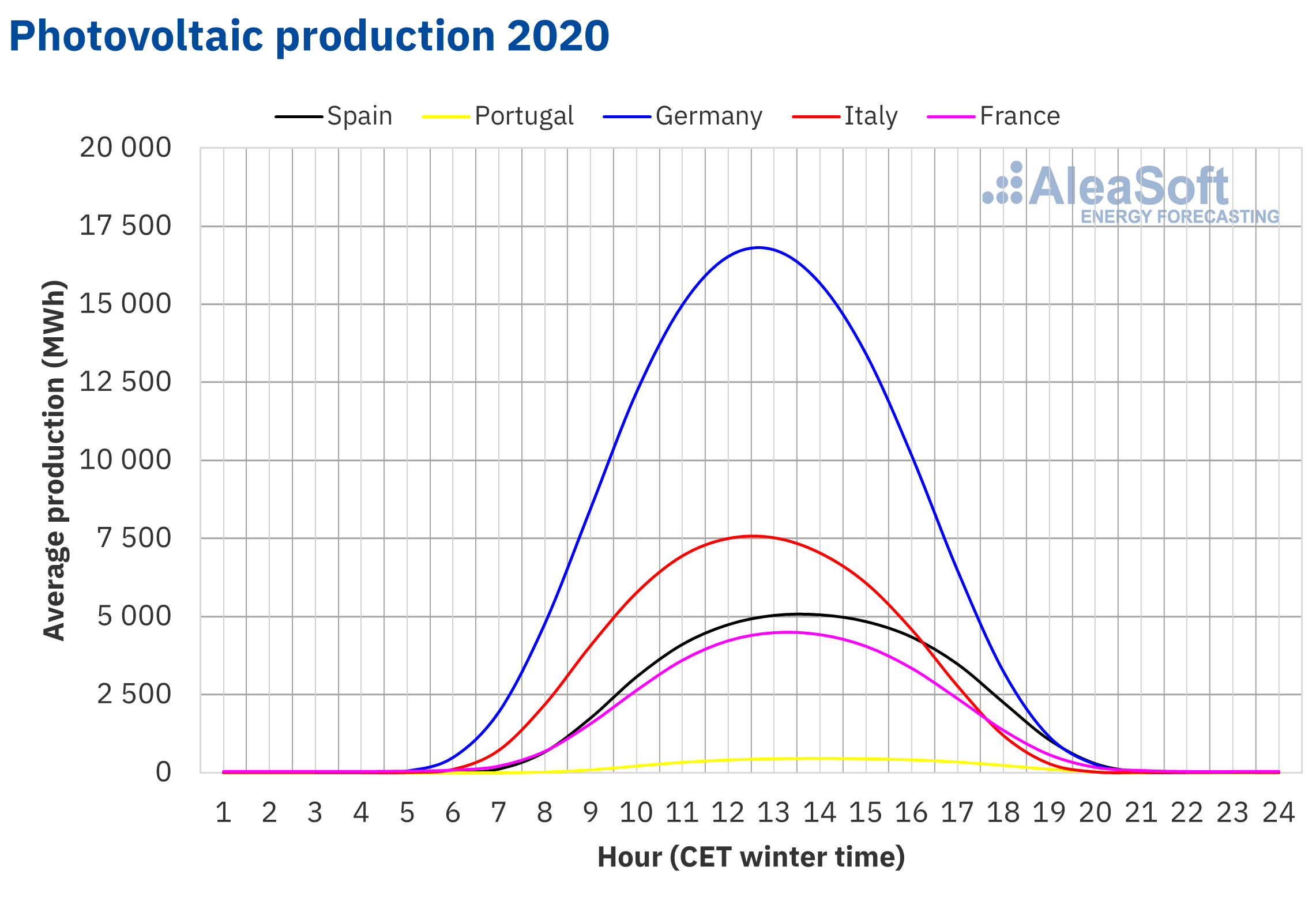 A different panorama was confirmed in the case of wind energy production, noting a production reduction of between 9.0% and 10% in the markets of Portugal and Italy during 2020 compared to 2019. On the contrary, in the French market, the production with this technology grew by about 18%, while in the markets of Germany and Spain, production grew between 1.7% and 5.9%. 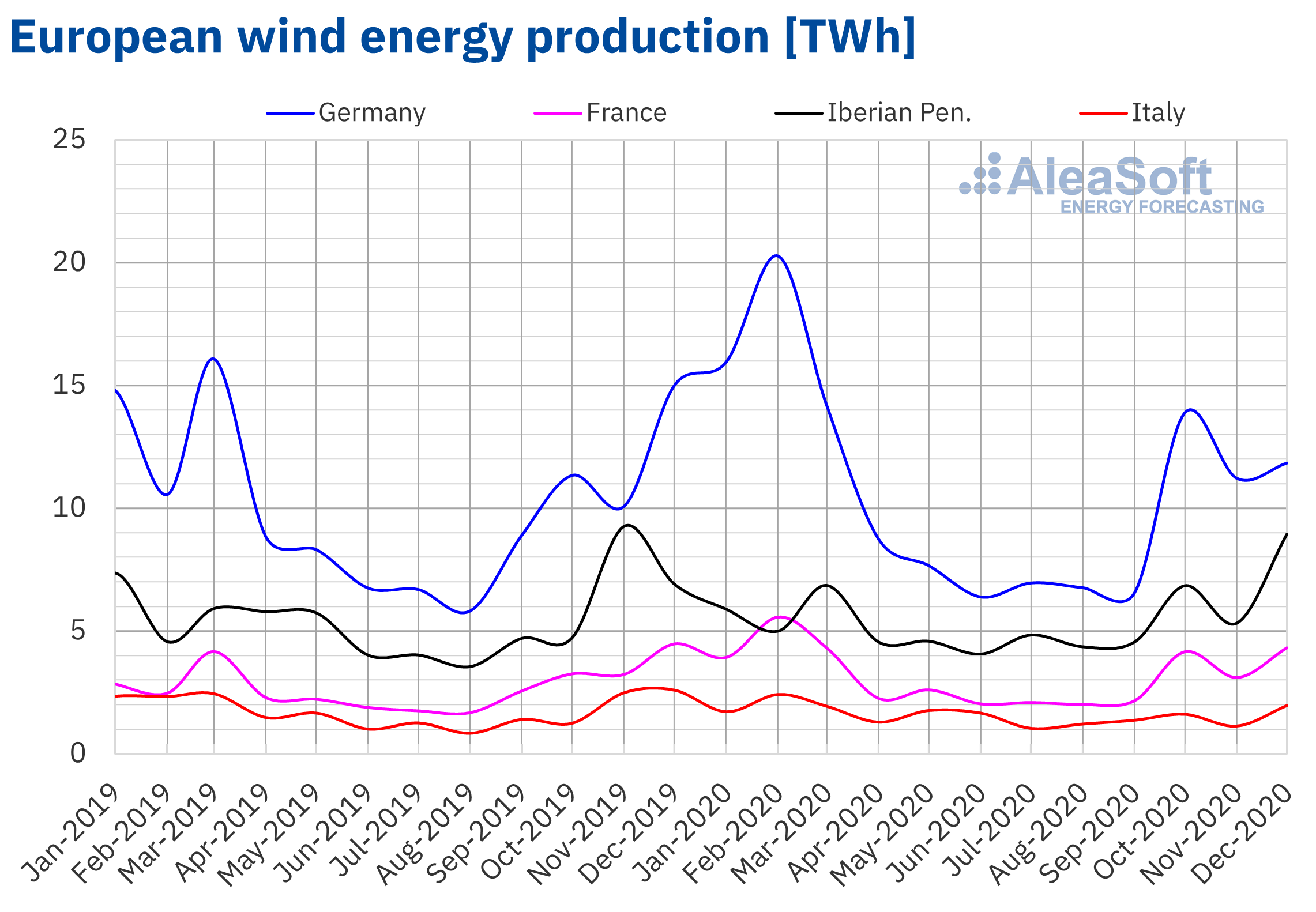 In this 2020 that is about to end, electricity demand decreased throughout Europe, being affected by the decrease in economic, labour and industrial activity in all the markets of the continent. Most of them registered their lowest annual values for 15 years, according to provisional data, as happened in the cases of France, Spain, Italy, Great Britain and Belgium. The most significant annual falls compared to 2019 were registered in the markets of Great Britain, Italy, Spain and France.

These falls are common in the British market year after year, but in the last 12 months its decline was the largest in at least the last twenty years. Another curious fact was registered in the German market: despite the fall in 2020, the decline in demand during the last year was smaller than between 2019 and 2018, pending confirmation of the settlement data for December 2020. 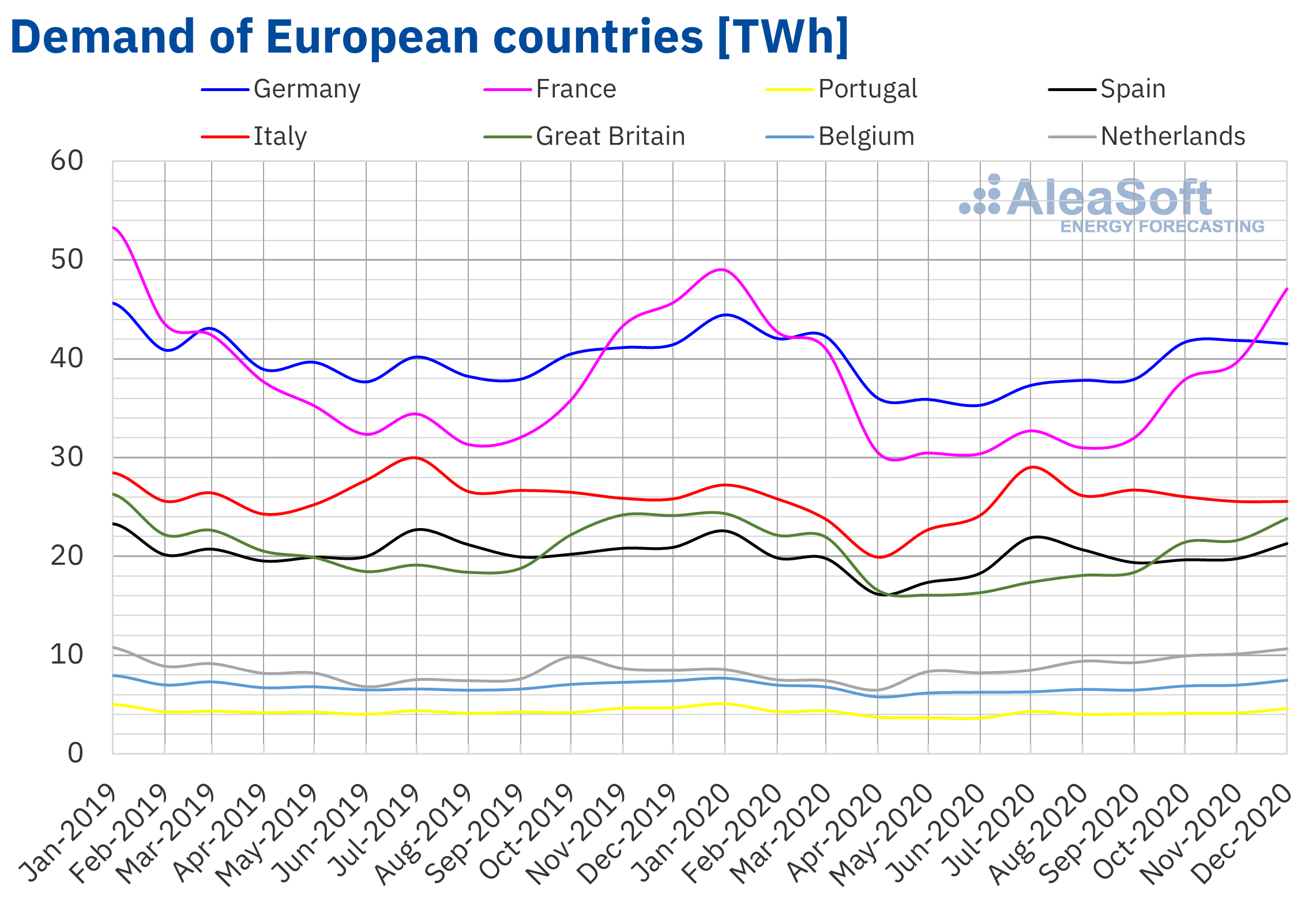 This year 2020, the prices of the wholesale electricity markets in Europe were clearly marked by the fall in demand, due to the confinement measures and restriction of economic activity to contain the expansion of COVID‑19, and by the fall of the gas prices, which is also partly due to the COVID‑19 crisis but which were already in clear decline since the end of 2018.

In the absence of data from the last three market days of the year, the average price for 2020 will be between just over €30/MWh of the German market and the around €40/MWh of the British and Italian markets, excluding the market of the Nordic countries. These annual averages represent a drop of around 20% compared to 2019 for markets in the centre of the continent. For southern European countries, this drop is close to 30%. For most markets, this year’s prices will be the lowest since at least 2004. For its part, the Nord Pool market in the Nordic countries has been very decoupled from the rest of the European markets. The 2020 average price will end up below €11/MWh, the lowest price, by far, at least in the last decade. 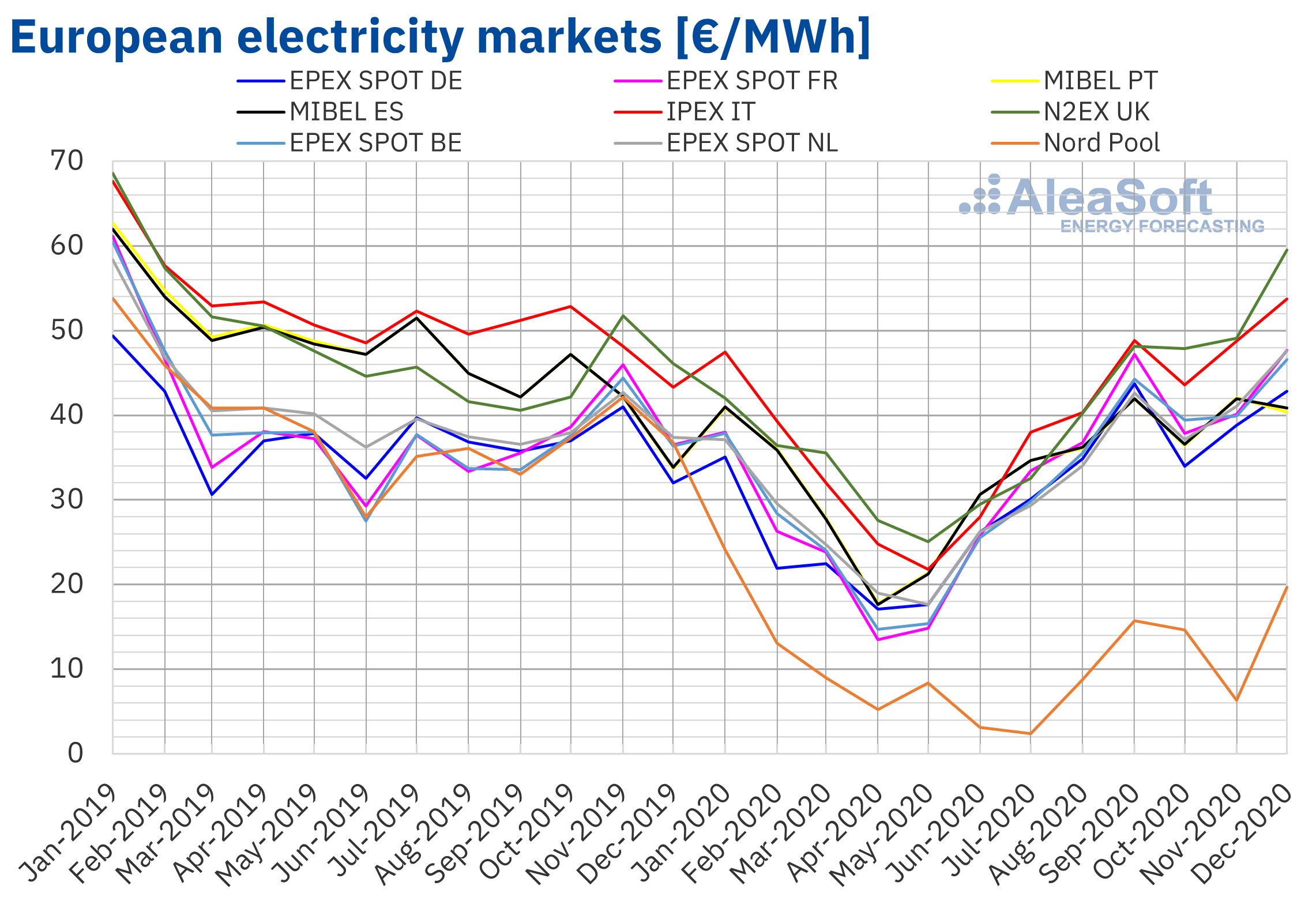 The prices of electricity futures for the product of the calendar year 2021 had a behaviour that illustrates the global crisis situation due to the coronavirus reflected in the European electricity futures markets. During the first quarter of the year, and more markedly in mid-March, prices in all markets registered a general drop of more than €10/MWh. This phenomenon occurred together with the declaration of states of alarm in many European countries. In the second and third quarters, prices stood relatively stable with a very slight upward trend in most markets, but also in the majority without reaching pre-crisis values. The last quarter and more specifically from the end of November, highlights the general rise in prices in all markets. Also, in the last month of the year, the gap that separates the price of this product in the markets of the Nordic countries from the rest of Europe widened. 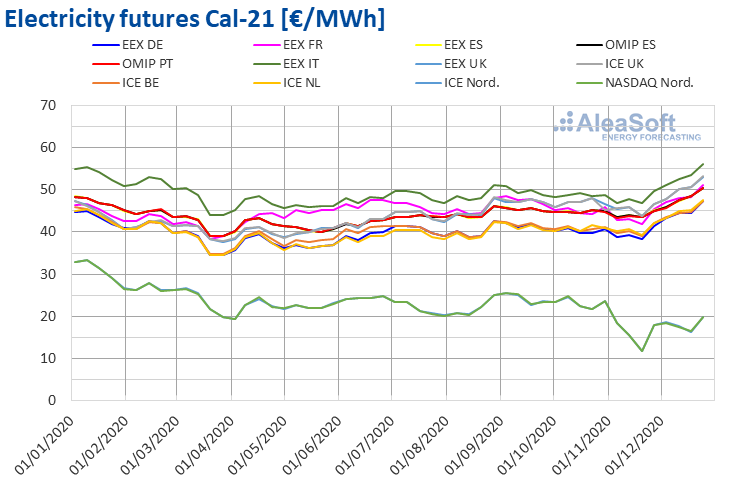 The oil was the first commodity with a more sudden drop in price upon the arrival of COVID‑19 in Europe. During the first half of March, the Brent oil front month futures prices lost more than 50% of its value and fell below $25 a barrel. The lowest prices per barrel were reached during the second half of April with values below $20. Since then, with some ups and downs, prices were recovering and by the end of the year they already exceeded $50 per barrel. The 2020 average price will be around $43 per barrel, the lowest price in the last fifteen years.

The API 2 coal futures prices for the next month followed a similar path during 2020. There was no such abrupt fall in prices in March and the lows during the month of April were below $40/t. Even so, the recovery in prices during the last two months of the year continued to approach $70 per ton of ore. In the global of the year, the average price will be slightly above $50 per ton, which represents a fall of 17% compared to 2019.

As mentioned above, the start of the downward trend in gas prices dates to the end of 2018 and the crisis situation during 2020 accentuated it. During the first half of the year, the fall in future prices for the next month of TTF gas was practically constant, losing 27% between January and the minimum registered at the end of May of €3.51/MWh. Starting in August, the price comeback was constant, with a certain hiatus in November, exceeding €17/MWh at the end of the year.

The usual volatility of the CO2 emission rights prices made the futures for December during this 2020 fluctuate widely with the events of the crisis caused by COVID‑19. In mid-March, coinciding with the restrictions on economic activity in most European markets, futures lost 36% of their value in just one week, falling to €15.30/t. But by the end of June they had already exceeded the prices of the beginning of the year, and since then they have remained above €25/t most of the time, exceeding €30/t steadily at the end of the year. 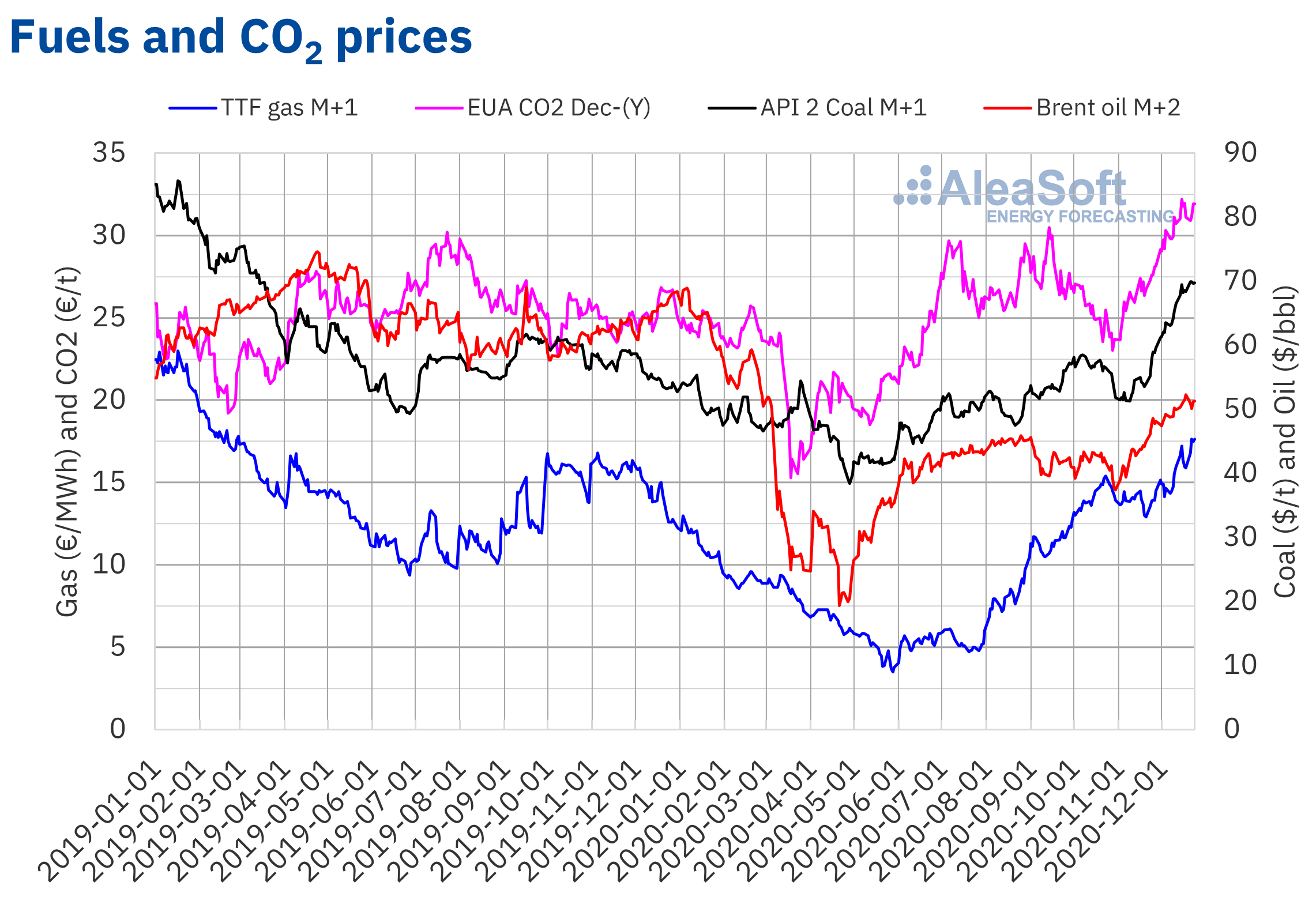 What 2020 brought was completely unexpected. Now all eyes are on the recovery of economic activity and the price and demand levels of the energy markets. AleaSoft has a wide variety of reports for the energy sector, which include detailed analyses on the evolution of energy markets in Europe and all the aspects that had or may have an influence on their prices and demands. The aim of these reports is to provide a clear vision of the future of the European energy system by providing knowledge, intelligence and opportunities.

The evolution and prospects of the energy markets in Europe are also analysed and discussed in the webinars that AleaSoft organises regularly. The first webinar of 2021 will be held on January 14 and will have the participation of speakers from the consulting firm PwC Spain, to analyse the state and vision of the PPA contract market for large consumers, its impacts and requirements, and the need for estimates of future electricity market prices.