Since the entry into operation of the Spanish electricity market in 1998, there was already an installed wind capacity on the peninsula of 375 MW, according to REE data. This capacity has been increasing over the years, often driven by government grants to encourage the energy transition to renewable energy generation sources. In 2000 the peninsular wind energy capacity grew by 79%, the highest percentage variation since the electricity market began until today. The year 2009 began with an installed capacity of 15 993 MW and that same year another 2722 MW were installed, the largest record of new capacity to date, ending the year with 18 714 MW. As of 2013, in which only 244 MW were installed from the 22 609 MW of 2012, there was a slowdown in the growth of this technology’s capacity. However, the growth rate regained momentum and since then until October 2019, 1168 MW were installed, the current capacity being 24 259 MW. 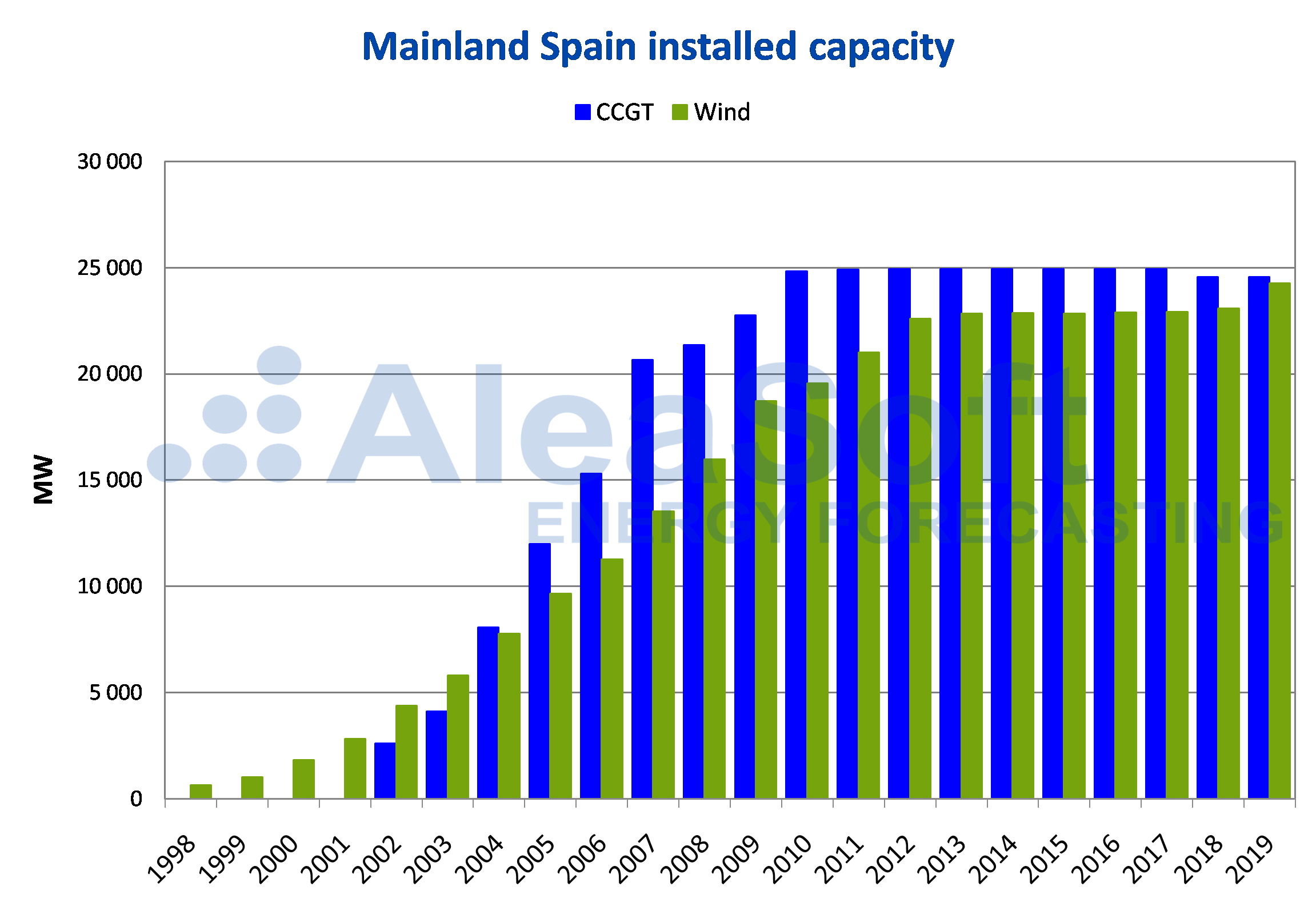 Source: Prepared by AleaSoft using data from REE. For the year 2019 data until October 2019. 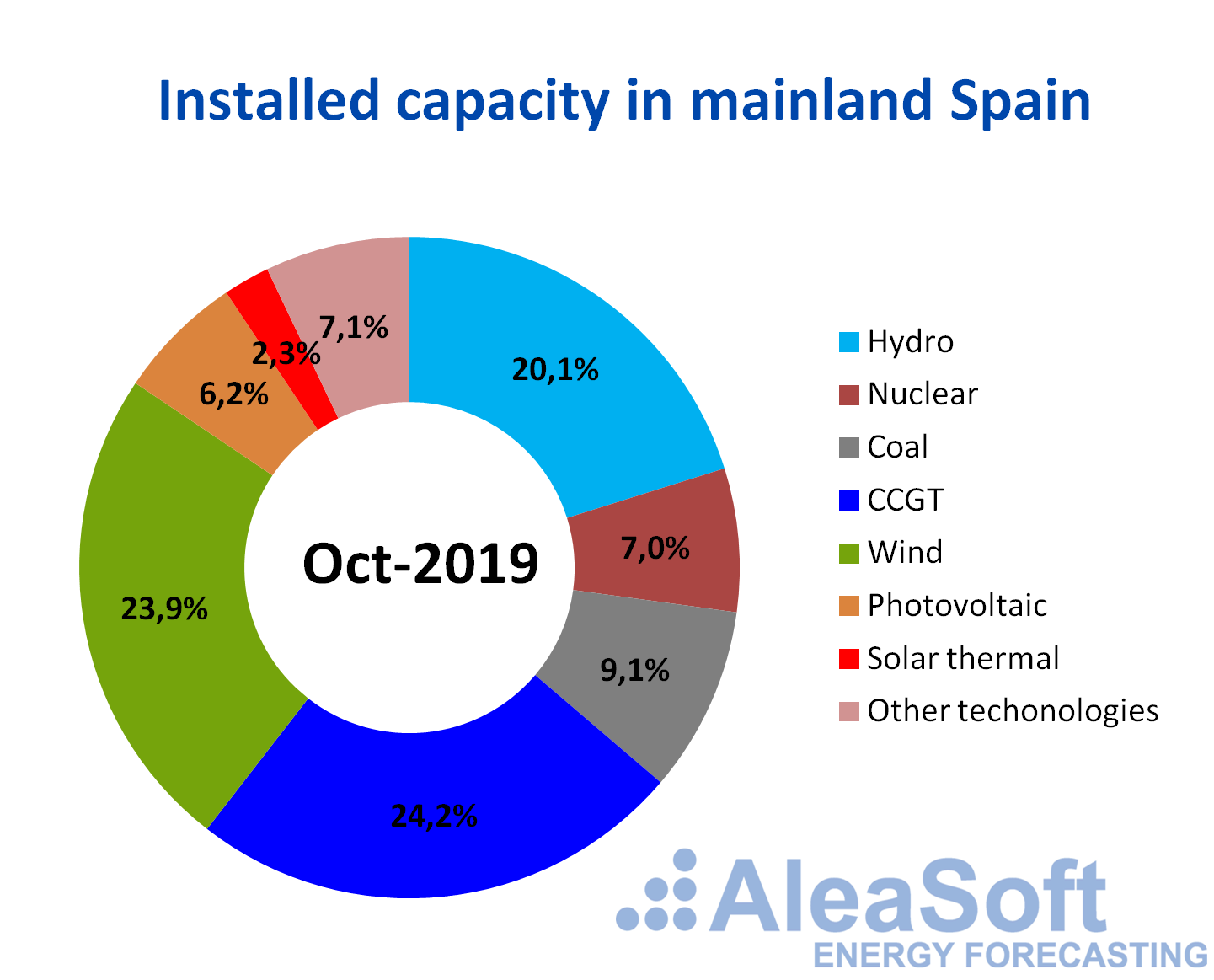 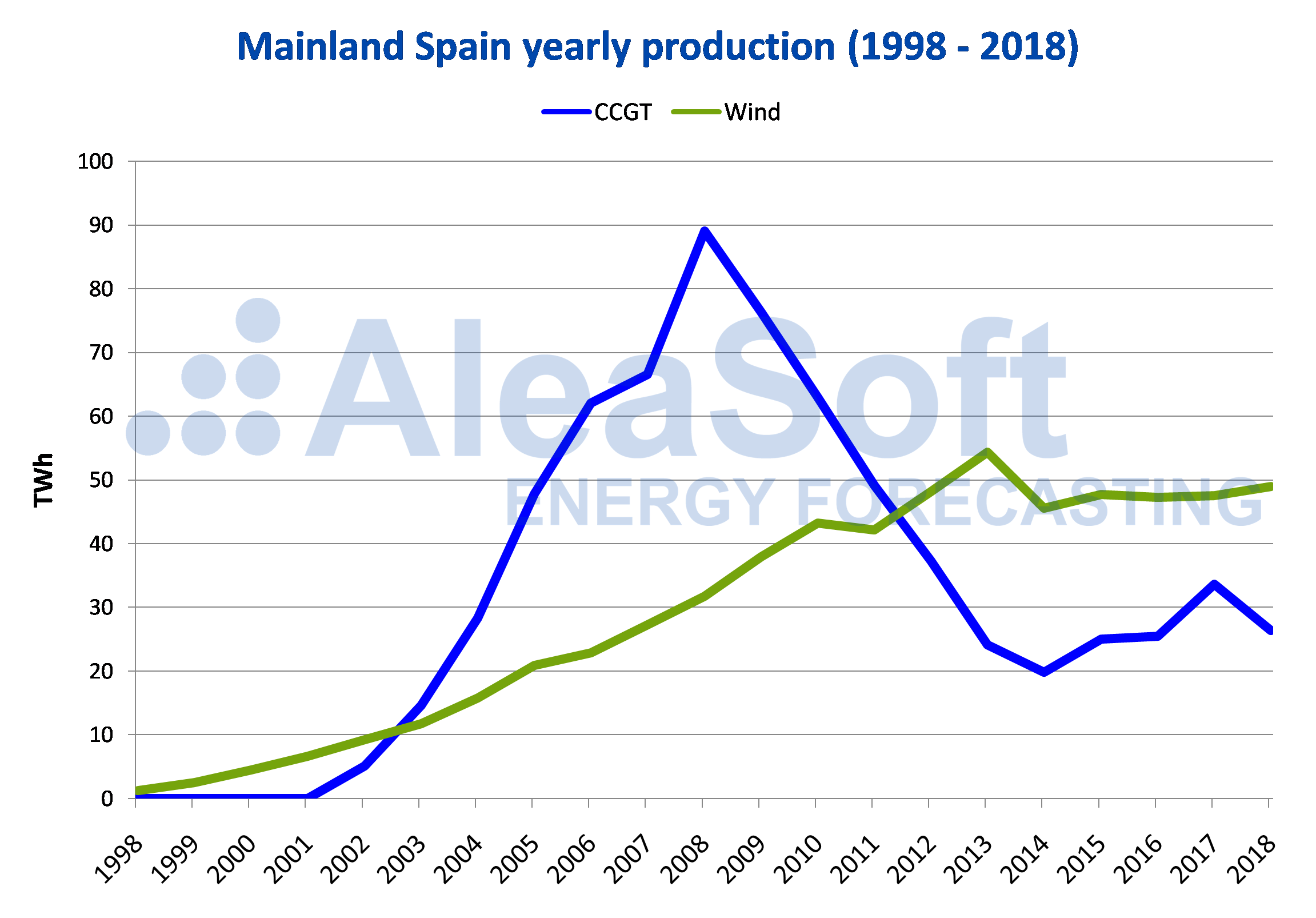 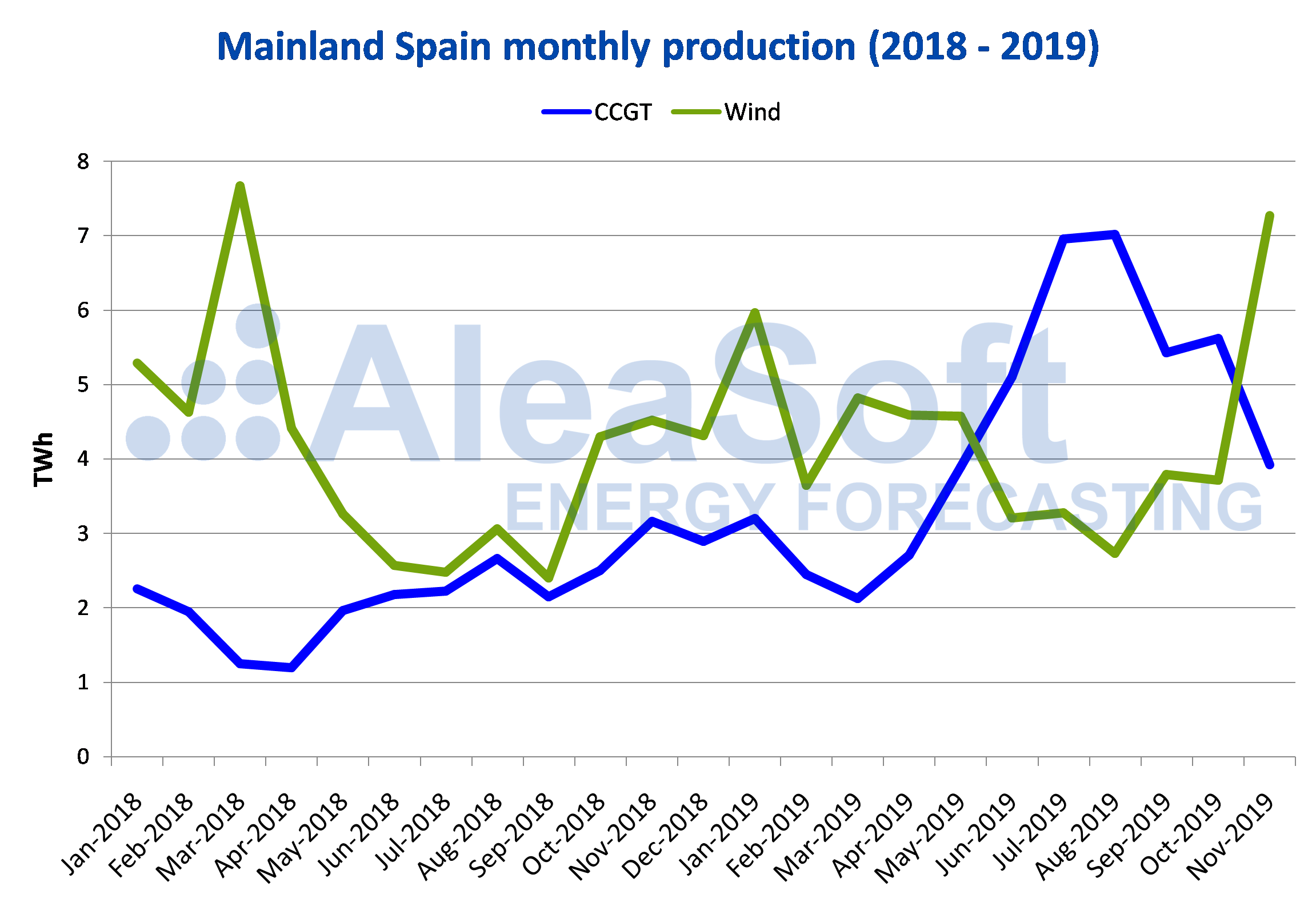 According to the scenarios proposed in the Integrated National Energy and Climate Plan (NECP), in 2030 the installed capacity in Spain, including the extrapeninsular systems, will be 157 GW, with less participation percentage of technologies that emit CO2, such as combined cycle gas turbines, and an increase in renewable energy technologies, where the wind energy is included. Specifically, the objectives of the NECP are that by 2030 the installed capacity of the combined cycle gas turbines will be 27 GW, very similar to the current one. This technology will play a very important role as backup technology in the energy transition process, taking into account the intermittency of the renewable energies and the planned closure of the nuclear power plants. On the other hand, the objective of the NECP in the case of the wind energy is doubling the current capacity and reaching 50 GW of installed capacity. 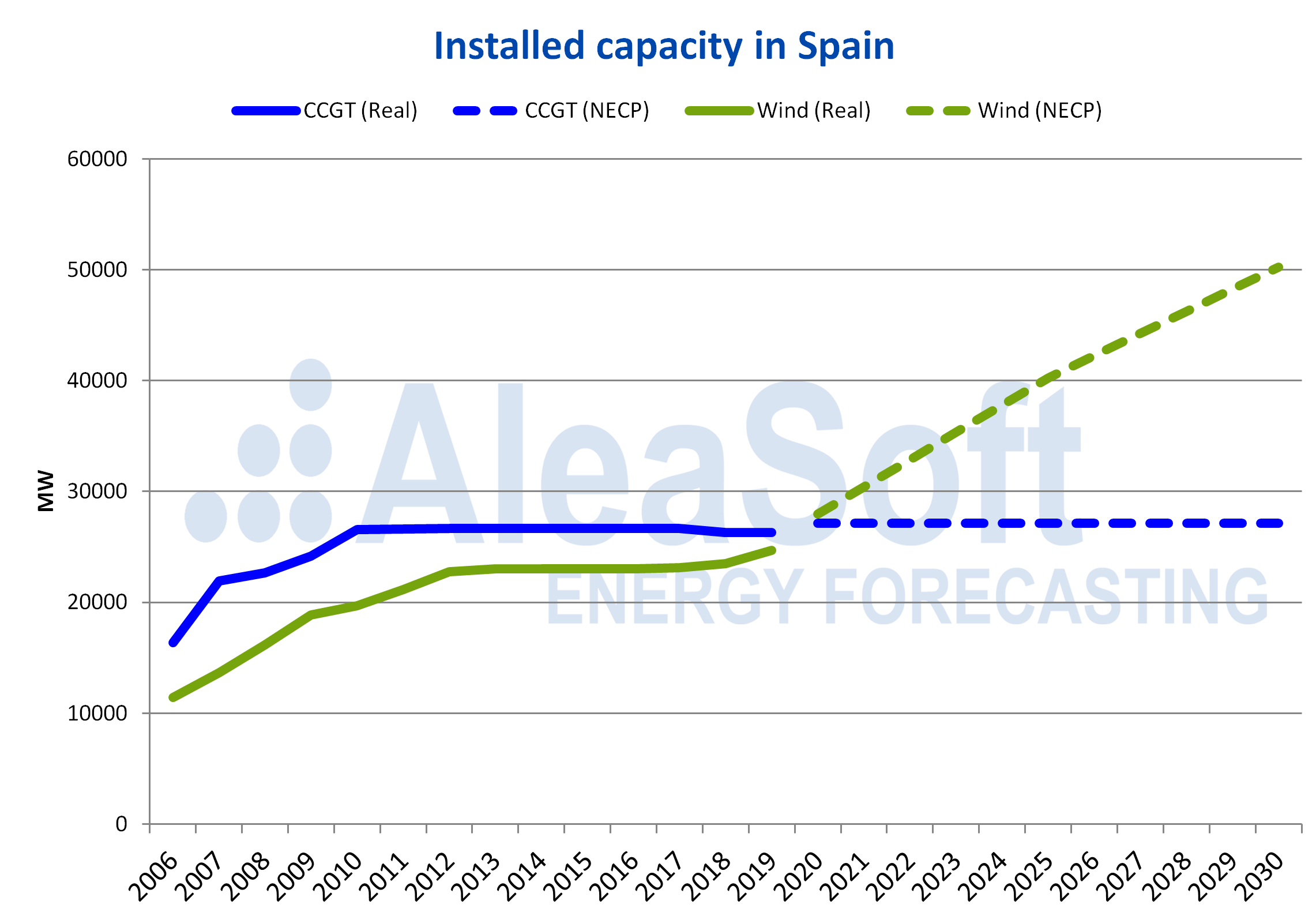