AleaSoft, March 5, 2019. AleaSoft analyses the content of the Integrated National Energy and Climate Plan and its proposals for the electricity sector, where the role that the consultancy foresees for hydrogen technologies is lacking.

The Integrated National Energy and Climate Plan (NECP) is a broad and cross-cutting document that addresses the goal of reducing greenhouse gas (GHG) emission from many angles, from transportation and electricity generation, to employment and R&D. The objective of the Plan is to achieve a 20% reduction in emissions in 2030 compared to the levels recorded in 1990. This means reducing the current emission levels by more than 30%. The draft lays the foundations to advance in the energy transition and achieve the ultimate goal of totally decarbonising the economy and converting Spain into a carbon neutral country by 2050.

The objective of the Plan is to achieve, in the year 2030, a penetration of renewable energy sources in the final energy consumption of at least 35%. Specifically for the electricity system, the objective is the generation of at least 70% of the electricity from renewable sources by 2030 and with the final goal of 100% by 2050. To do this, the NECP proposes to install 69 GW of renewable capacity before 2030, and reduce conventional generation by 15 GW. 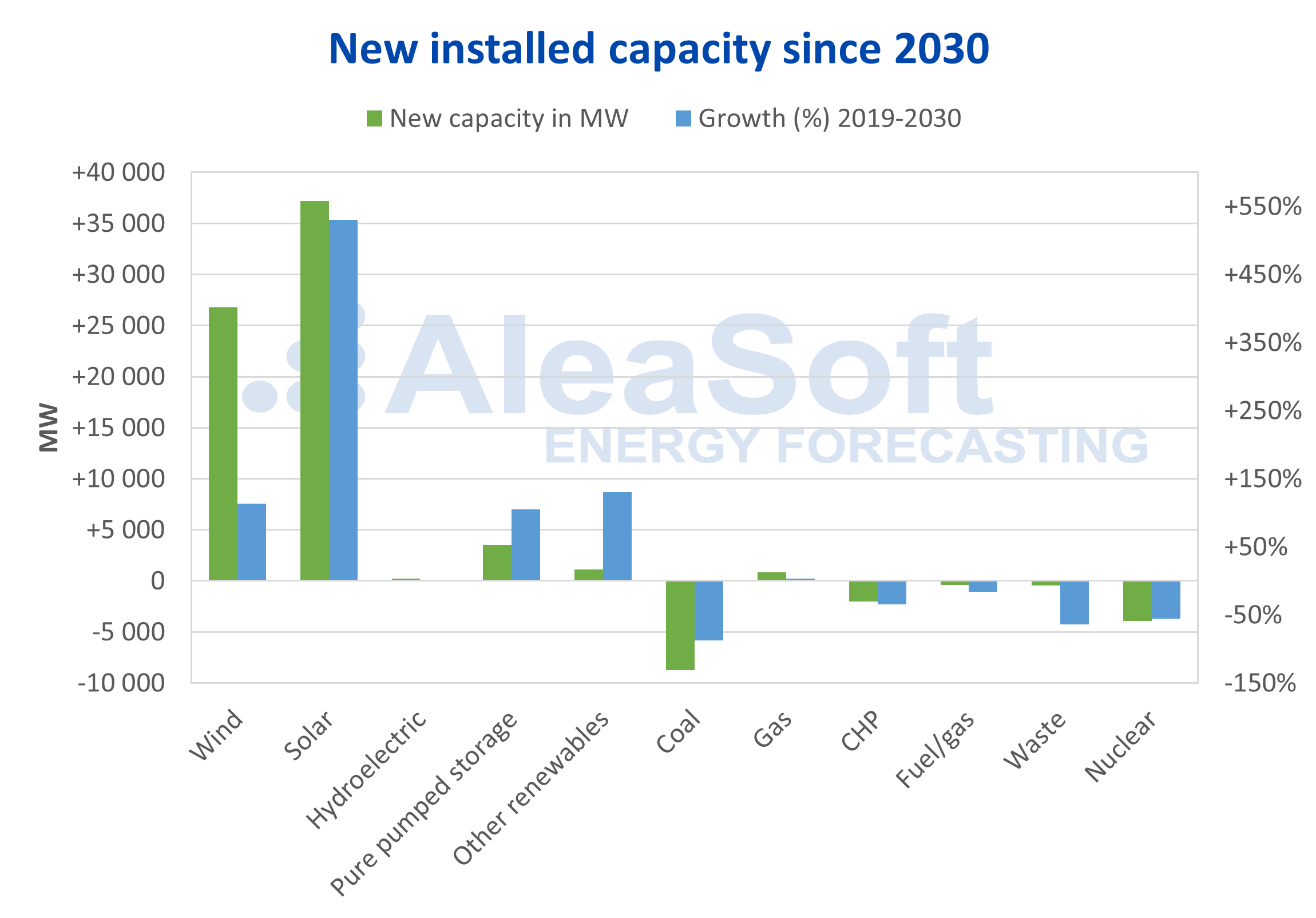 Source: Prepared by AleaSoft using data from REE and the Ministry for the Ecological Transition.

The star technology in this renewable revolution will be the solar energy with new 37 GW, of which 32 GW will be of photovoltaic technology and 5 GW of solar thermal. This new capacity to be installed represents an increase of 530% compared to the current power. As previously published, in AleaSoft it is considered that photovoltaics is the most appropriate technology to lead the energy transition due to the abundant solar resource that exists in the Iberian Peninsula, especially in its southern half.

The second potential technology to be installed before 2030 is the wind energy with new 27 GW and a capacity growth of 114%. And behind the solar and the wind energy, with much less new capacity are the rest of renewable technologies that will add another 5 GW.

On the side of the reduction of conventional generation, the technology that is intended to be eliminated more quickly is coal. In 2030, it is expected to have removed at least 8.7 GW from the current 10 GW, but with the possibility of closing 100% of the power plants if security of supply allows it. The Plan estimates that coal thermal power stations will no longer be competitive by 2030 if the price of CO2 emission rights reaches 35 €/t. Right now, the price of emissions is around 23 €/t after it tripled in 2018.

The other conventional technology condemned to disappear according to the draft is the nuclear. By 2030 it is expected to halve the installed capacity by closing 4 GW. On a smaller scale, the other technologies to be reduced are cogeneration, generation with waste and fuel-gas.

The willingness of the Plan to withdraw up to 2 GW of cogeneration is somehow surprising. The employers of the sector have already shown their disagreement. Cogeneration is one of the most efficient ways to produce heat for the industry. Producing all that thermal energy directly using electricity would be a disproportionate expense for those industries. According to AleaSoft, the best strategy to reduce emissions in industries that require heat is cogeneration with renewable gas or even with hydrogen, which, according to the consultancy, is the fuel of the future and, in addition, does not produce emissions. 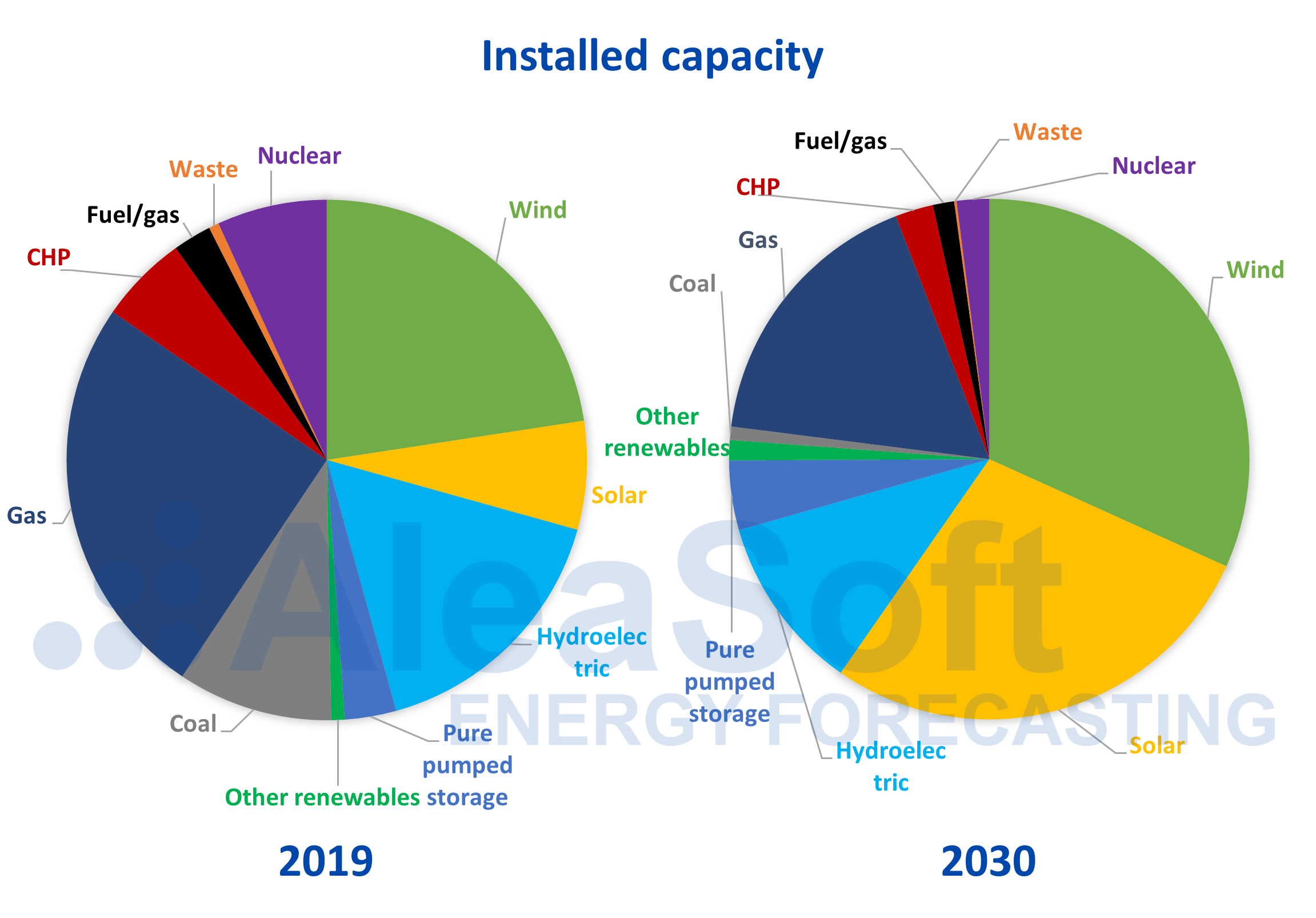 Source: Prepared by AleaSoft using data from REE and the Ministry for the Ecological Transition.

As highlighted by AleaSoft, the renewable transition proposal of the Plan shows very explicitly the need that renewable energies continue to have a backup technology due to its intermittent nature: to remove 15 GW of conventional capacity it is necessary to install 69 GW of renewable capacity . The draft is committed to maintaining gas as a backup technology, maintaining the installed capacity of this technology at least until 2030. But the support for intermittent renewable production is also addressed from two other angles: storage and interconnections.

In terms of energy storage, the Plan will promote the pumped storage hydropower plants with new 3.5 GW that allow the management of renewable production and, additionally, can support the regulation of watersheds in conditions of extreme phenomena. The installation of up to 2.5 GW of batteries is also contemplated gradually as the technology matures.

In AleaSoft the mention of hydrogen is lacking as a tool for storing large amounts of energy over long periods of time, being able to counteract the seasonality of a large part of the renewable production. In the Plan, hydrogen is only mentioned as an alternative fuel for transportation.

On the interconnection side, the Plan contemplates the already planned projects to increase interconnections with France up to 8000 MW and with Portugal up to 3000 MW. Even with these increases in exchange capacity, Spain will not achieve a 10% interconnection with respect to its total installed capacity and will continue far from the minimum target of 15% of the European Union.

The draft Plan also takes into account the increase in energy efficiency as an essential tool for the energy transition. The Spanish economy has internalized the importance of energy efficiency in the face of crisis since, as AleaSoft showed in a recent article, after the economic crisis the energy intensity has been clearly reduced and energy efficiency has increased.

Other important aspects that the draft also takes into account are self-consumption and, in general, a more active role for the consumer. With the approval of the Plan, the demand aggregator will be created as the new subject of the electricity sector to boost the participation of demand in the ancillary services. It is promoted that the aggregation of demand allows a greater participation of distributed generation and self-consumption in the imbalance and ancillary markets.