On Sunday, April 5, low, some negative, prices were registered in the European electricity markets

AleaSoft, April 6, 2020. Last Sunday, April 5, negative hourly prices were reached in some European electricity markets, registering an hourly minimum of the last ten years in the N2EX market of Great Britain. This behaviour is due to the combination of low electricity demand due to the coronavirus crisis coupled with high renewable energy production, in the current context of low gas and CO2 prices. In the current week, it is expected that the demand will go down because the measures to stop COVID‑19 are joined to the effect of Easter.

The solar energy production increased last week by 47% in Italy. On the contrary, the production with this technology decreased by 18% in the Iberian Peninsula, with the largest drop, of 36%, in Portugal. In the German market, the total production of the week fell 2.3% compared to the week of March 23. However, on Sunday, April 5, the highest daily production so far this year, of 239 GWh, was registered in this market.

The month of April began with a higher solar energy production in most of the markets analysed by AleaSoft compared to the same days of April 2019. In these first 5 days in the Italian market, this production registered an increase close to 72%, while in the Spanish and the German markets the increases were 44% and 42% respectively. The exception was the Portuguese market, which registered a production very similar to last year’s during that period. 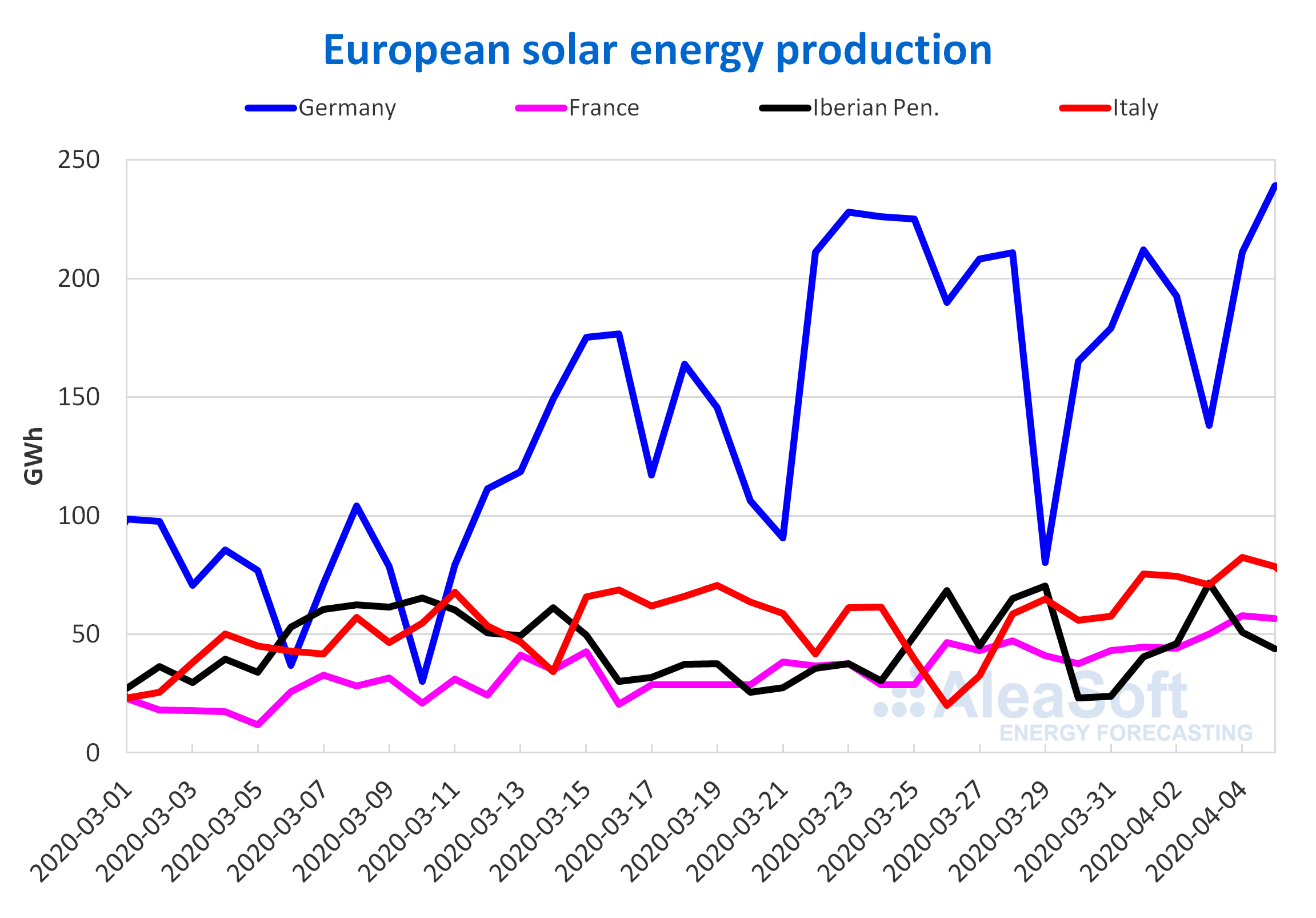 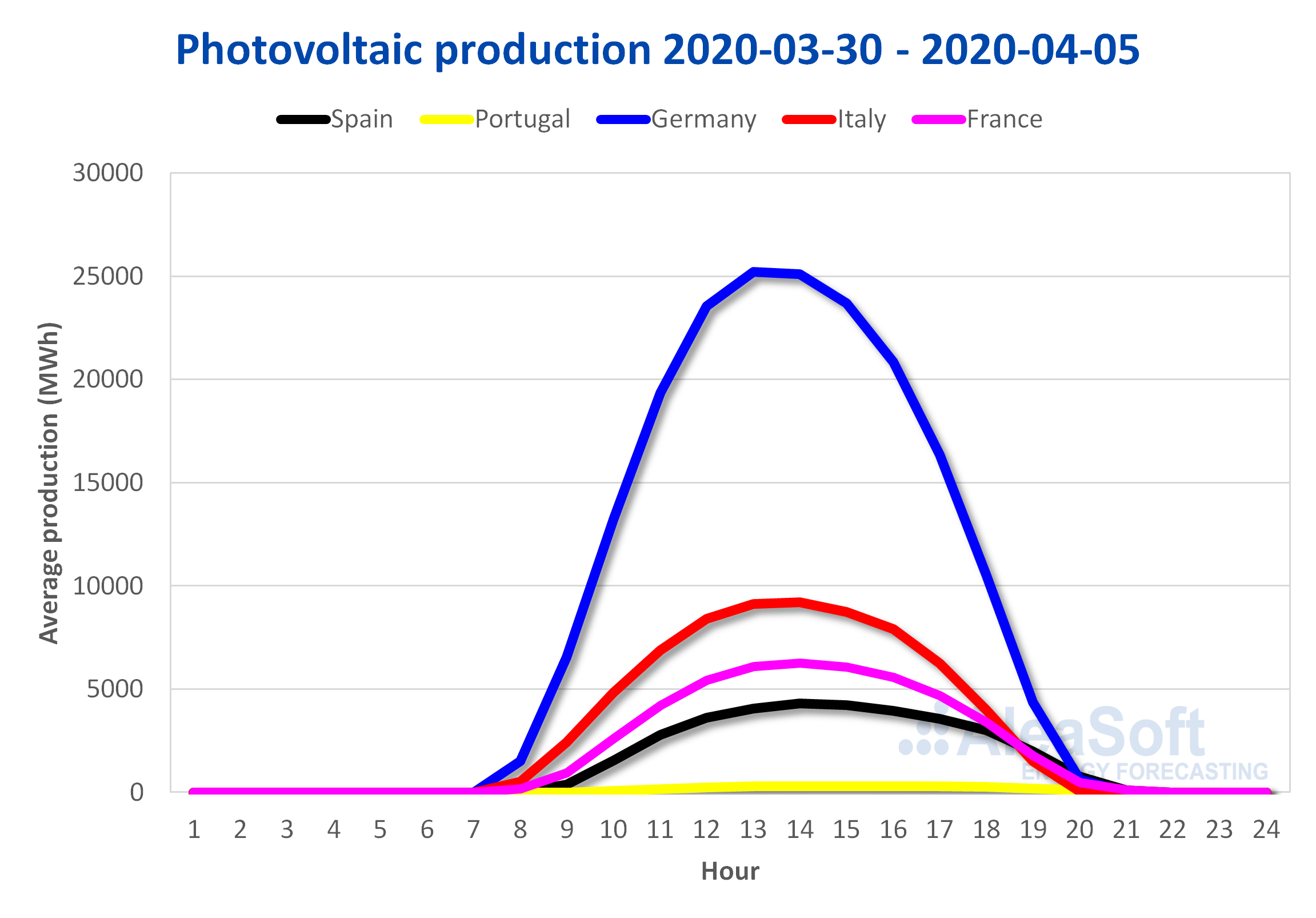 The wind energy production during the week of March 30 was higher than the previous week in the Iberian Peninsula and Italy. With an increase of 74%, the wind energy production soared in the Portuguese market, which, together with the 47% increase in Spain, led the Iberian Peninsula to a generation 52% more than the previous week. In Italy there was a slight increase of 3.8% while in the German market the production with this technology decreased by 28%.

In these first 5 days of April, the wind energy production was higher in all the European markets analysed by AleaSoft compared to the same period of April 2019. In the year‑on‑year analysis, the increases of 72% in the Italian market, of 39% in the German market and of 21% in the Spanish market stand out.

For the current week, the AleaSoft‘s wind energy production forecastings indicate a general drop compared to last week in the generation with this technology in the main European markets. 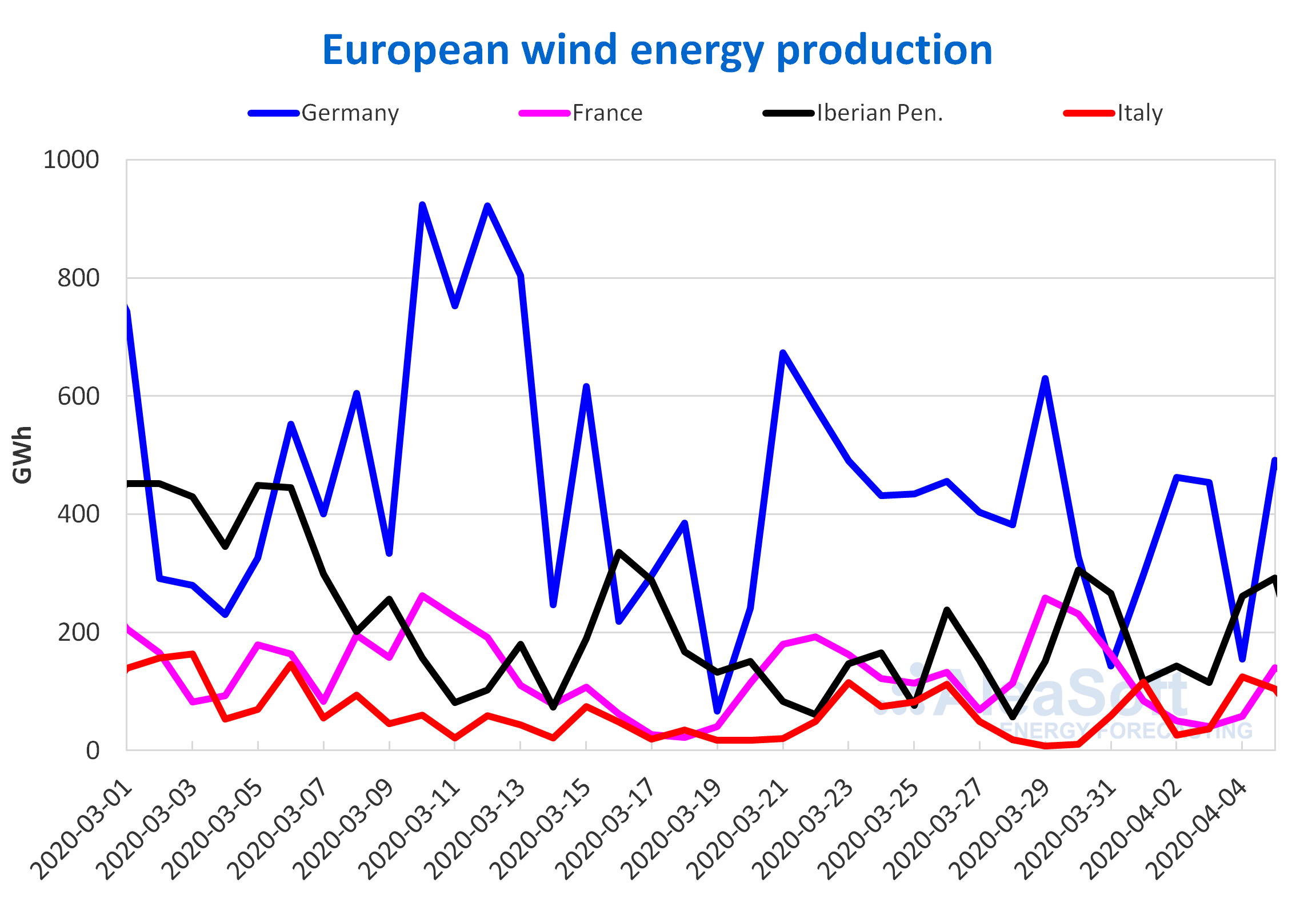 Last week in most European markets the downward trend that the electricity demand began to register since the measures to stop the spread of the coronavirus started to be implemented stopped. In France and Italy there were slight increases of 0.9% and 0.3%, while in Portugal and Belgium the demand rose 2.5% and 3.5%, respectively. On the other hand, in Germany the demand fell 1.2% and in Great Britain, 0.3%. 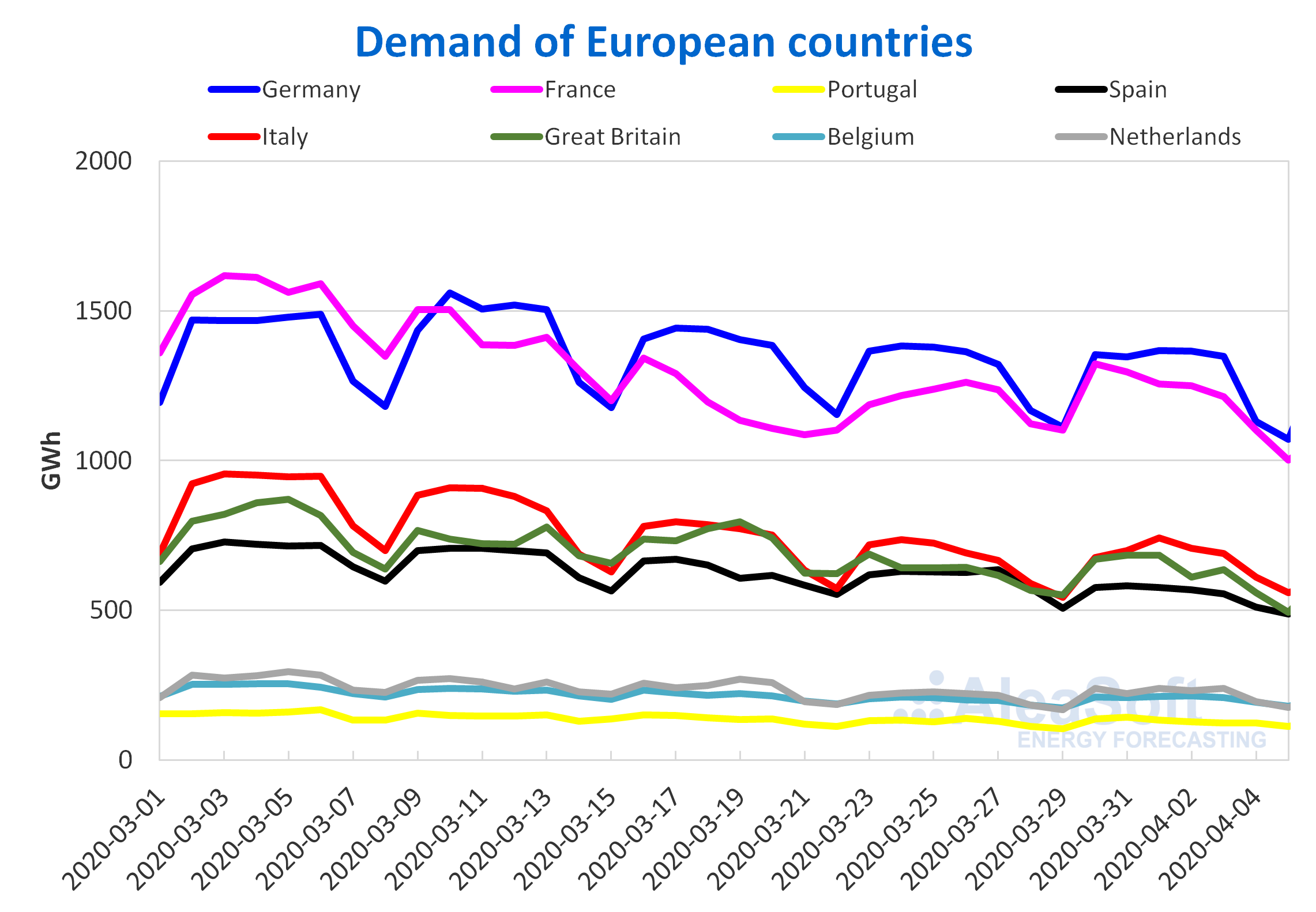 However, in the case of Mainland Spain, there was again a drop in demand during the past week, of 8.6%, as a result of the increase in restrictions, announced in BOE number 87 on Sunday, March 29, to try to flatten the contagion curve by COVID‑19. For this reason, the electricity demand fell to levels of 17 years ago, with a volume close to that of the week of May 12, 2003. 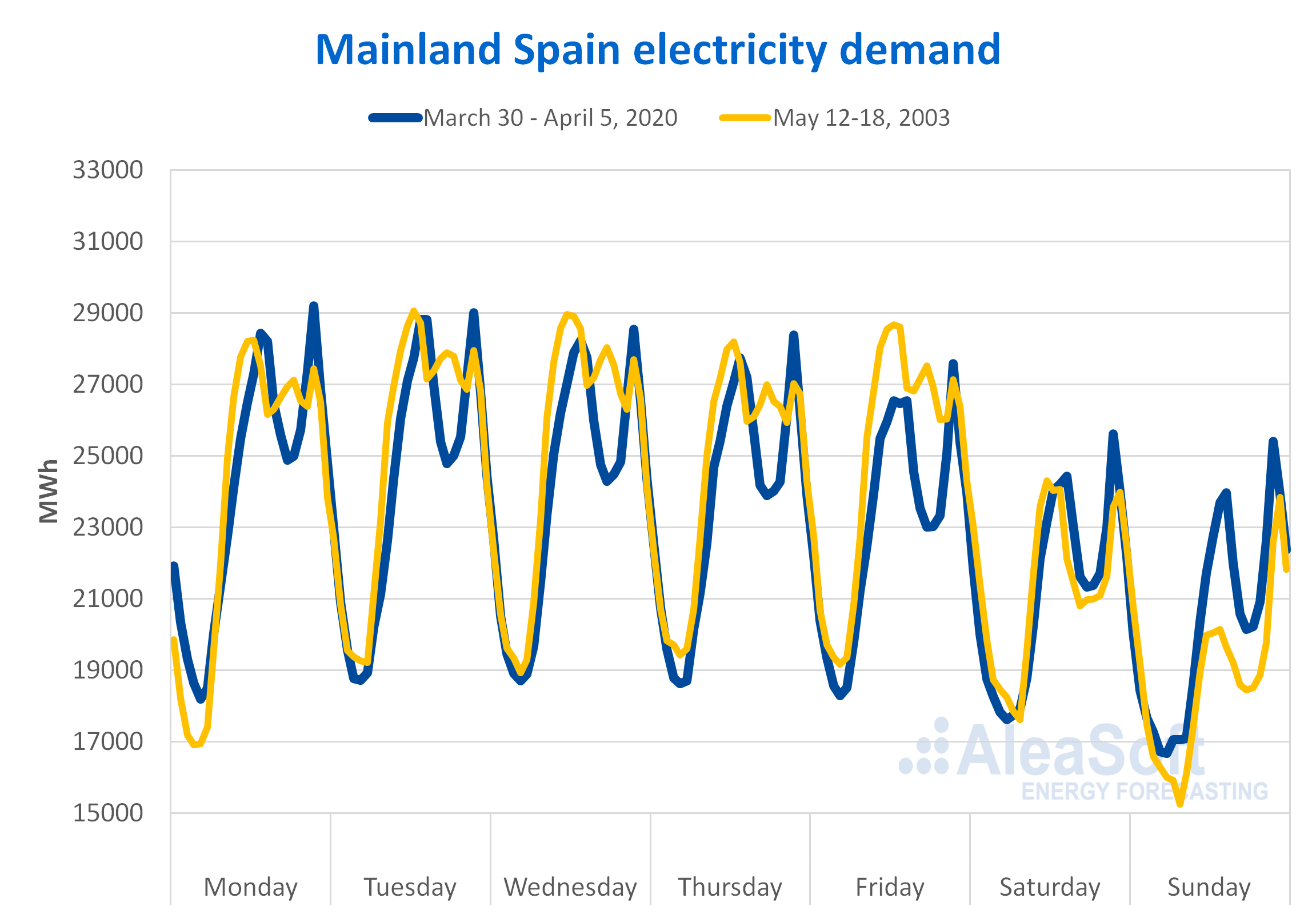 At the demand observatory of AleaSoft the behaviour of the electricity demand of Mainland Spain with daily updated data can be analysed.

For this week of April 6, which coincides with Easter, the demand forecastings of AleaSoft indicate a decrease in electricity demand in most European markets.

With these variations, the market with the lowest average price of last week was once again the Nord Pool market, with a price of €5.37/MWh, while the markets with the highest average prices were the N2EX of Great Britain and the IPEX of Italy, with €28.87/MWh and €25.46/MWh, respectively.

Yesterday, Sunday, April 5, the daily average prices were less than €10/MWh in most European electricity markets, with the exception of the Italian IPEX market, where €17.52/MWh was reached. The market where the lowest average price was registered was the EPEX SPOT market of Germany, with €2.68 MWh, followed by the EPEX SPOT market of Belgium and the Nord Pool market with prices of €4.41/MWh and €4.45/MWh respectively. This day there were negative hourly prices in the EPEX SPOT market of Germany, Belgium, France and Switzerland and the N2EX market of Great Britain. In the case of Great Britain, at the hour 16, a price of ‑€21.56/MWh was registered, which is the lowest in the last ten years. On the other hand, in the MIBEL market, on Sunday at the hour 17, an hourly price of €1.95/MWh was registered, which is the lowest so far this year, and the average for that day, of €8.16/MWh, is also the lowest of the year so far.

The low prices registered this Sunday in the European electricity markets are related, on the one hand, to low demand and, on the other, to high renewable energy production in some markets. All this adds to the current context of low prices, also favoured by the fall in gas and CO2 prices. 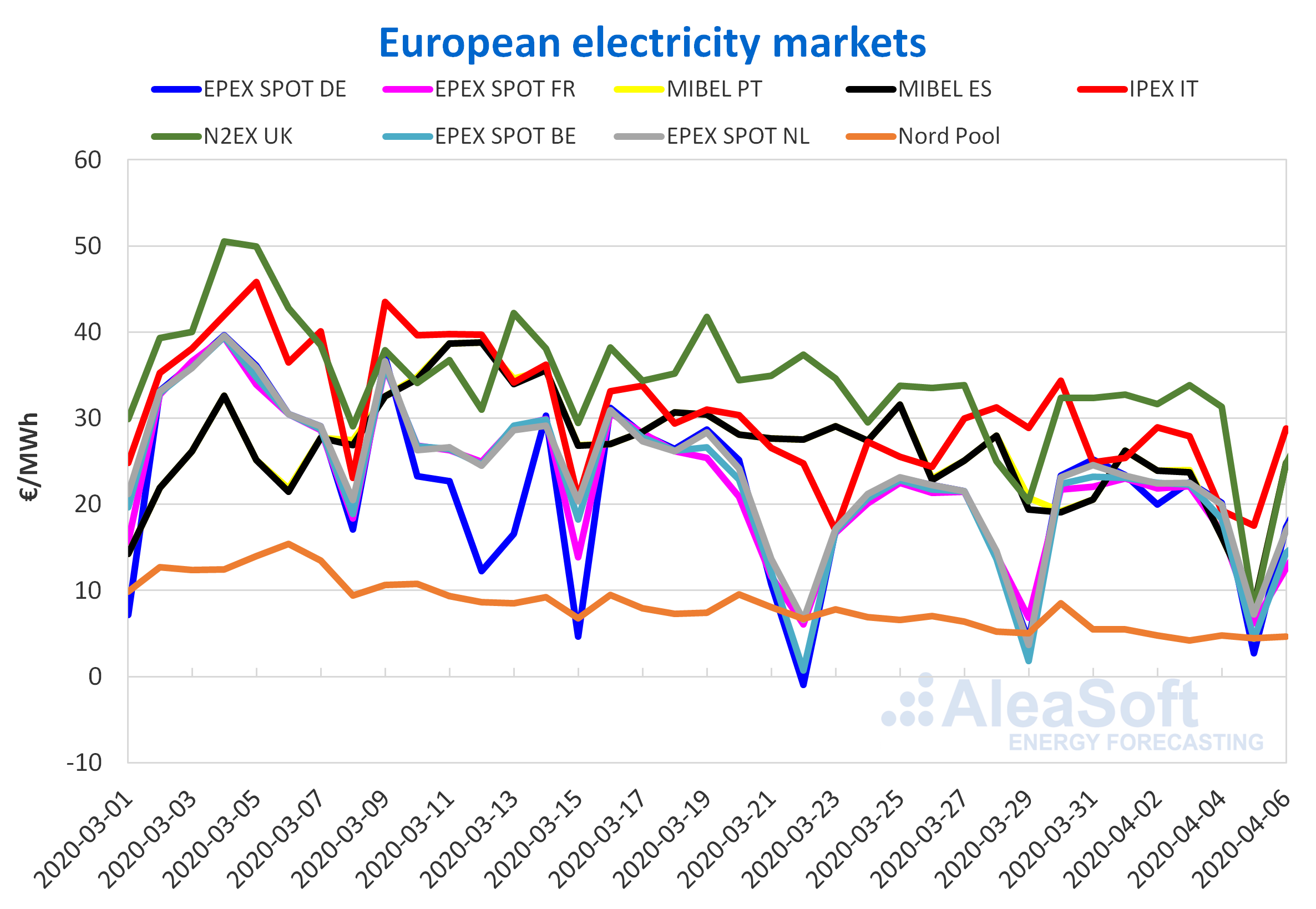 The electricity futures prices for the third quarter of 2020 showed a heterogeneous behaviour in the European markets analysed at AleaSoft during the past week of March 30. The EEX market of Germany and Italy and the ICE market of the Netherlands registered increases of 1.2%, 1.1% and 1.3%, respectively, when comparing the settlement price of the sessions of March 27 and April 3. Meanwhile, in the rest of the markets there were drops in the price of this product. The most stable market was the EEX of France, with a decrease of 0.2%. On the other hand, the ICE and NASDAQ markets of the Nordic countries registered the largest price reductions, with 8.9% and 9.2% respectively.

As for the electricity futures for the calendar year 2021, the performance was up in all the European markets analysed at AleaSoft, except in the ICE and NASDAQ markets of the Nordic countries, where decreases of 2.7% and 3.0% respectively were registered. The market with the highest increase in the settlement price between the sessions of Friday, March 27, and Friday, April 3, was the ICE of Belgium, with 4.6%. Meanwhile, the ICE market of Great Britain was the one with the lowest increase, with a variation of 1.7%.

The reduction in demand due to the expansion of the coronavirus worldwide and the measures taken to fight against its spread is influencing the evolution of oil prices. At the end of last week, the intentions of Russia and Saudi Arabia to reduce their production also exerted their influence on prices, this being the reason for the recovery on Thursday and Friday. The OPEC+ meeting that had to be held this Monday, April 6, was postponed until next Thursday, April 9, and it is expected that the prices will evolve in the coming days conditioned by the expectations that are generated around the possibility of that further cuts in production are agreed.

The TTF gas futures prices in the ICE market for the month of May 2020 throughout the past week remained fairly stable below €7/MWh. The settlement prices ranged from €6.93/MWh of Thursday, April 2, to €6.82 MWh of Wednesday, April 1. This value of Wednesday is 12% lower than that of the same day of the previous week and the lowest in the last five years.

Regarding the TTF gas in the spot market, last week’s index prices showed a downward trend, going from €7.39/MWh of Monday, March 30, to €6.84/MWh of the weekend. The value registered last weekend is the lowest since October 2008. For this Monday, April 6, the index price is slightly higher, of €6.87/MWh.

On the other hand, the API 2 coal futures prices in the ICE market for the month of May 2020 fell during the past week until reaching a settlement price of $46.75/t on Friday, April 3, 12 % lower than that of Friday of the previous week and the lowest since those registered in the spring of 2016. Until March 25, the prices of this product had an upward trend due to the possibility that the supply would be affected by the closing of mines and ports. However, as of that day, the prices began to decline, as the decrease in demand because of the coronavirus and the decrease in gas prices are having more weight.

Regarding the CO2 emission rights futures in the EEX market for the reference contract of December 2020, last week they registered settlement prices between €17.07/t of Monday, March 30, and €18.06/t of Thursday, April 2, which is the highest price since March 17. Most of the days of last week, the prices were higher than those of the same days of the previous week, with the settlement price of Monday showing the highest increase, of 9.8%. 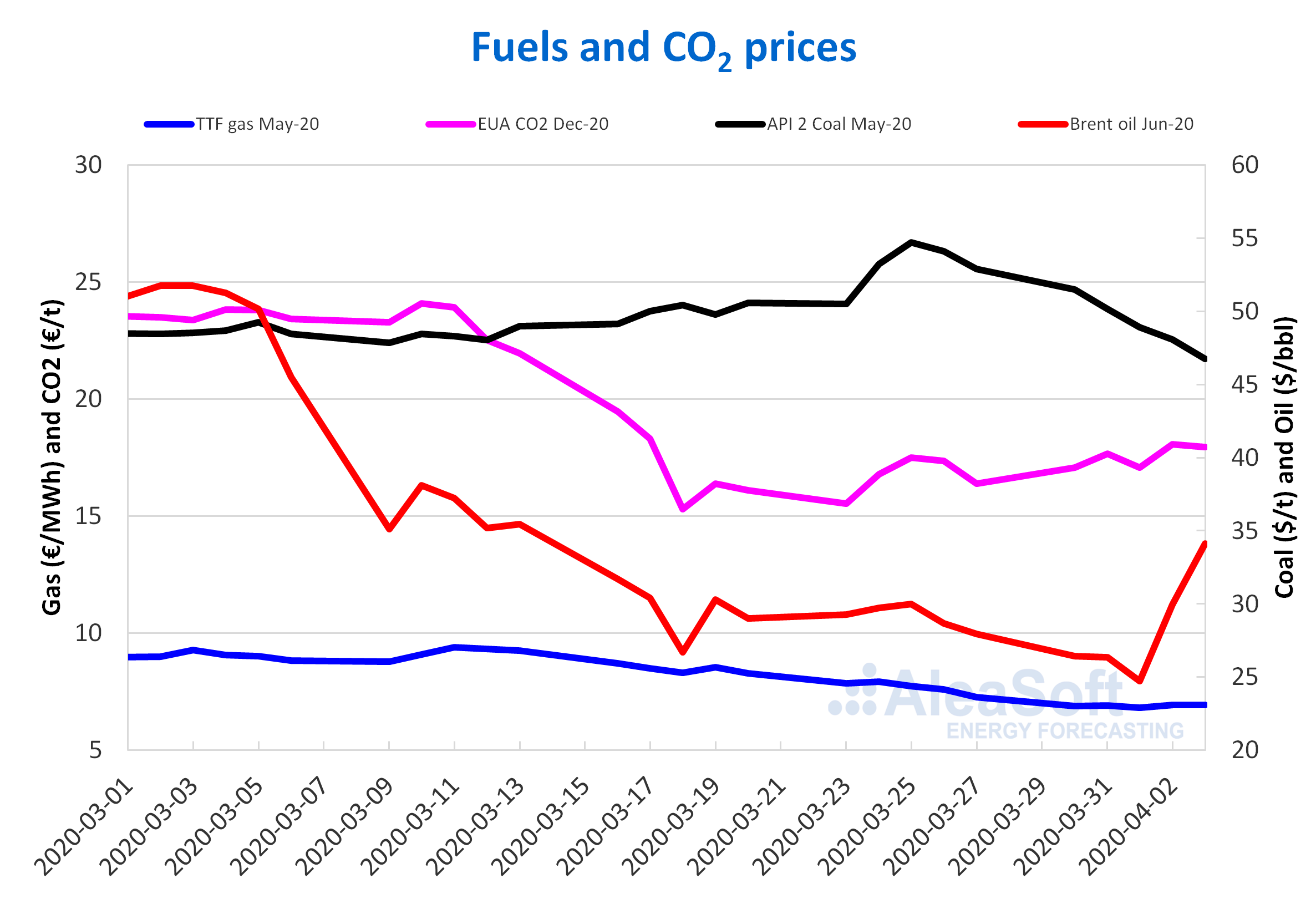