AleaSoft, April 20, 2020. The combination of high wind energy production, with lower electricity demand and lower gas and CO2 prices caused by the coronavirus crisis, continues to result in declines in prices in Europe’s electricity markets. On April 19, 20 and 21, negative hourly prices were reached in the markets of Germany, France and Belgium. This week, the prices are expected to remain low in the electricity markets, although in some cases they will rise compared to last week.

For most European markets, the solar energy production during the past week ended up being lower than that of the previous week. In the Italian market, the production with this technology fell by 16%, while in the French the decrease was 14% and in the German, 7.7%. The exception was the Portuguese market that finished the week with a 28% higher production than that of the week of April 6.

On the contrary, during this month of April, until Sunday 19, the production grew in all markets analysed at AleaSoft compared to the same days of April 2019. The greatest variation was in the Italian market, with an increase of 60% in the production. In the rest of the markets the variations were from 9.5% to 34%. 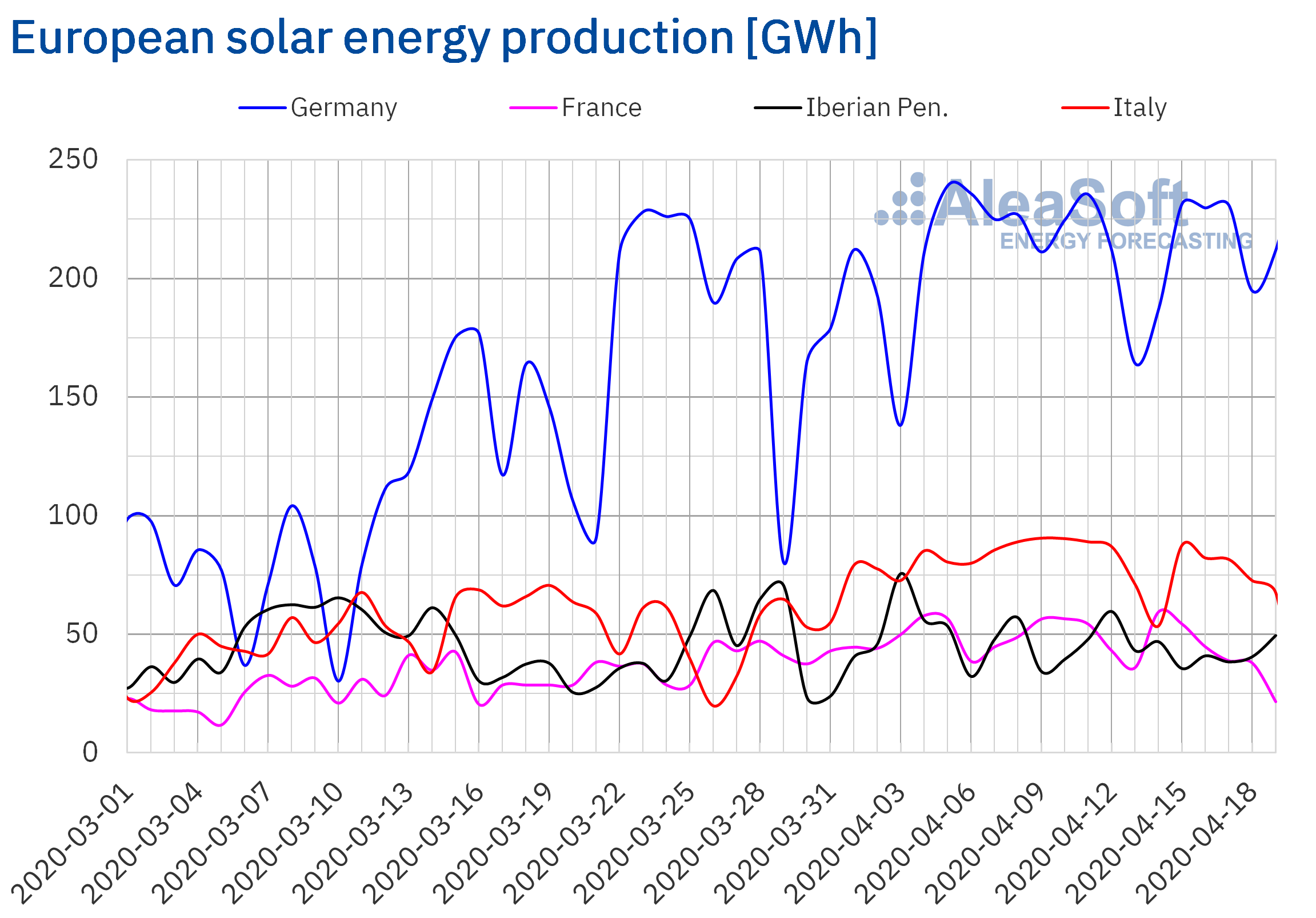 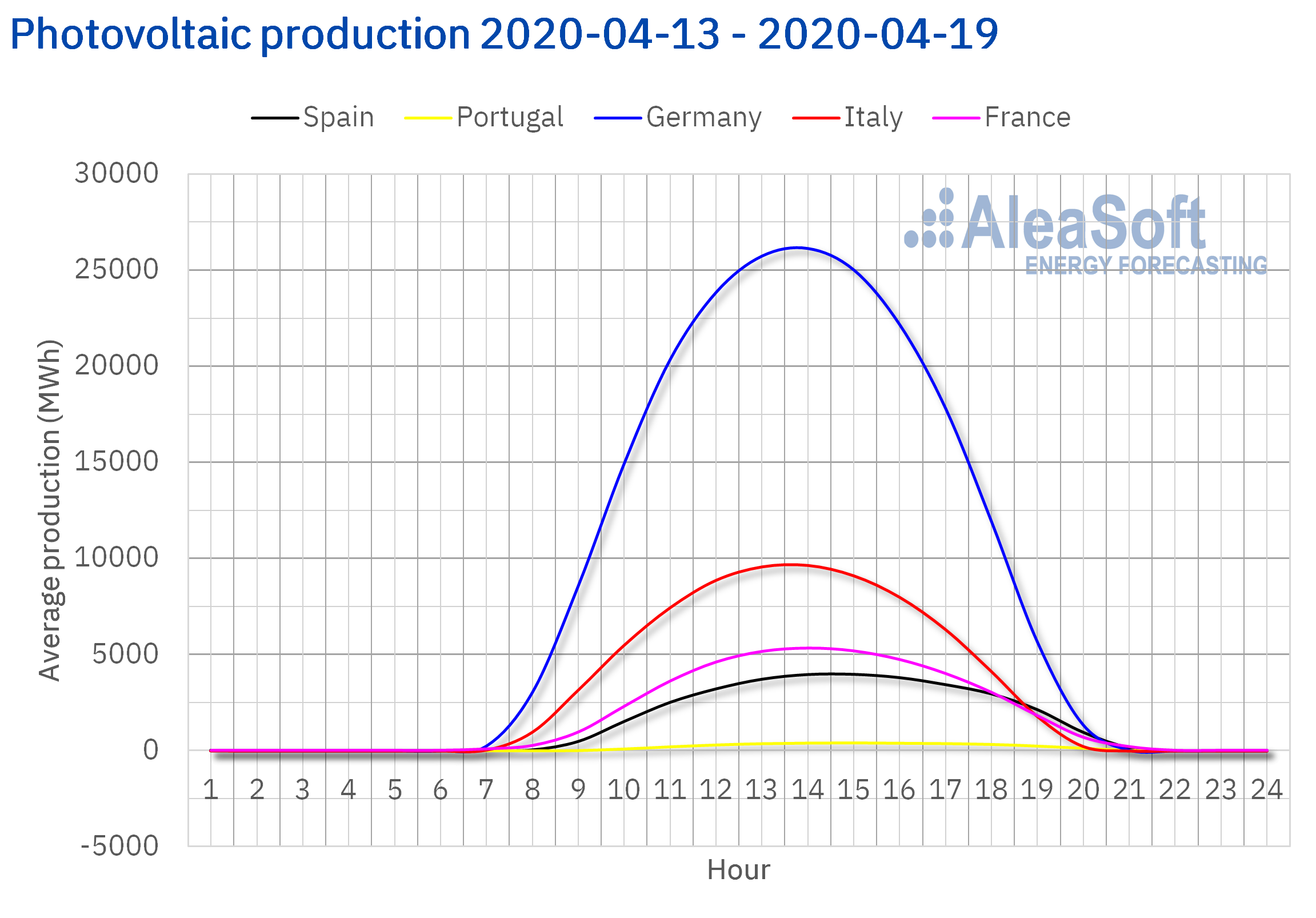 The wind energy production increased last week compared to the previous week in all the European markets analysed at AleaSoft. The market that registered the greatest variation in production with this technology was the Portuguese where it tripled. In the rest of the markets the increases were between 78% in Italy and 45% in the Spanish market.

In the year‑on‑year comparison of the first 19 days of April, the picture is different, the 26% decrease in this production in the Iberian Peninsula compared to the same period of last year standing out. In Italy and Germany the productions decreased by 12% and 4.7% respectively. The only market that registered an increase in wind energy production was the French one with a variation of 3.7%.

For this week the AleaSoft‘s wind energy production forecasting indicates a decrease in production in the Iberian Peninsula, Italy and the French market. On the contrary, it is expected that in the German market the production will be higher this week than the week that ended last Sunday, April 19. 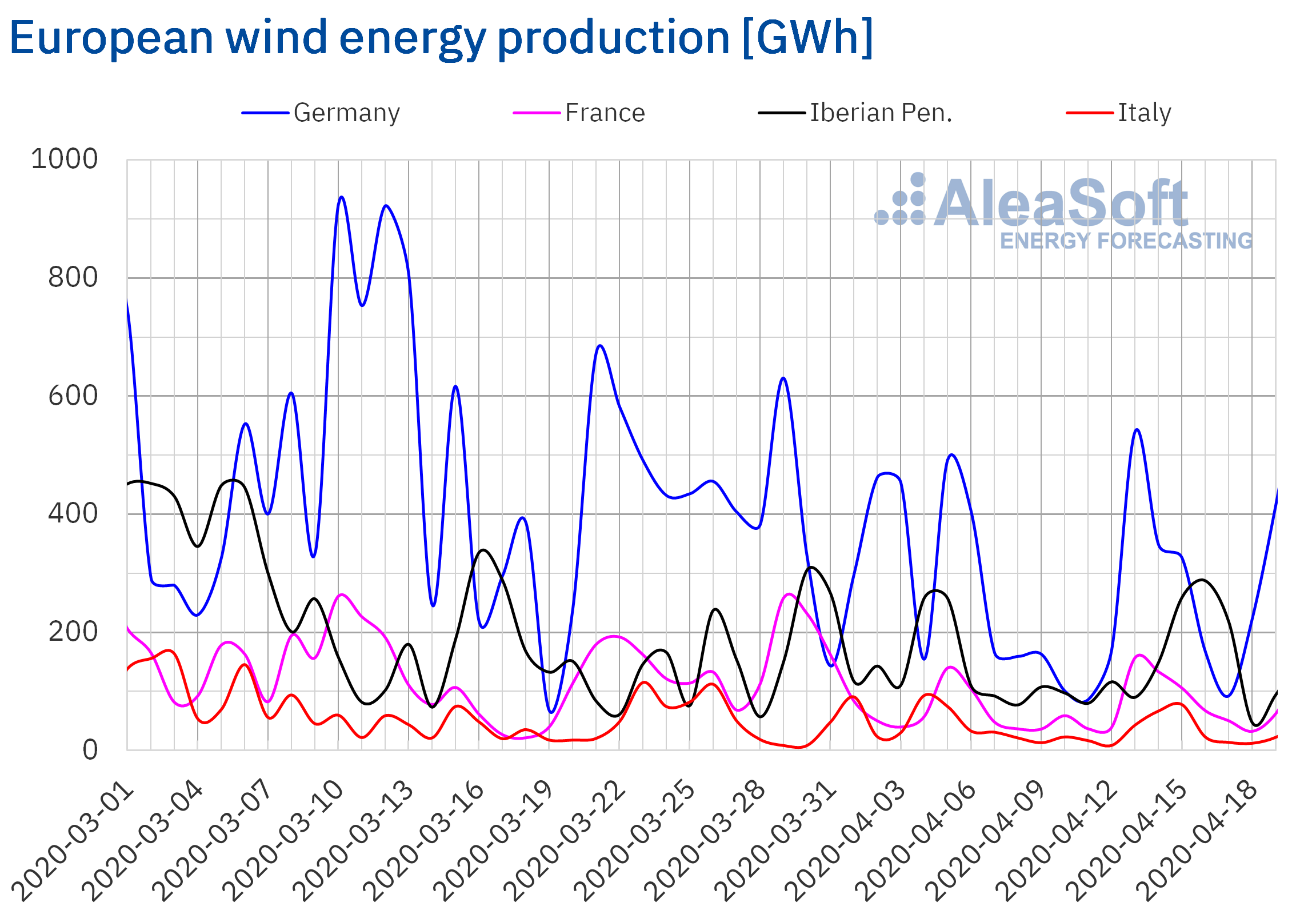 During the week of April 13, the electricity demand continued to decline in most European markets compared to the week of April 6, despite the fact that this week was Easter. In a week when, in addition, the average temperatures were colder than those of the previous week in most of the continent, the main factors that influenced these declines were the Easter Monday holiday in most markets and the measures implemented to curb the COVID‑19. The greatest decrease was registered in Italy, with a variation of ‑3.8%, while in France, Belgium and the Netherlands the decreases were between 2.1% and 2.5%. In Great Britain and Germany the decreases were less than 1%. 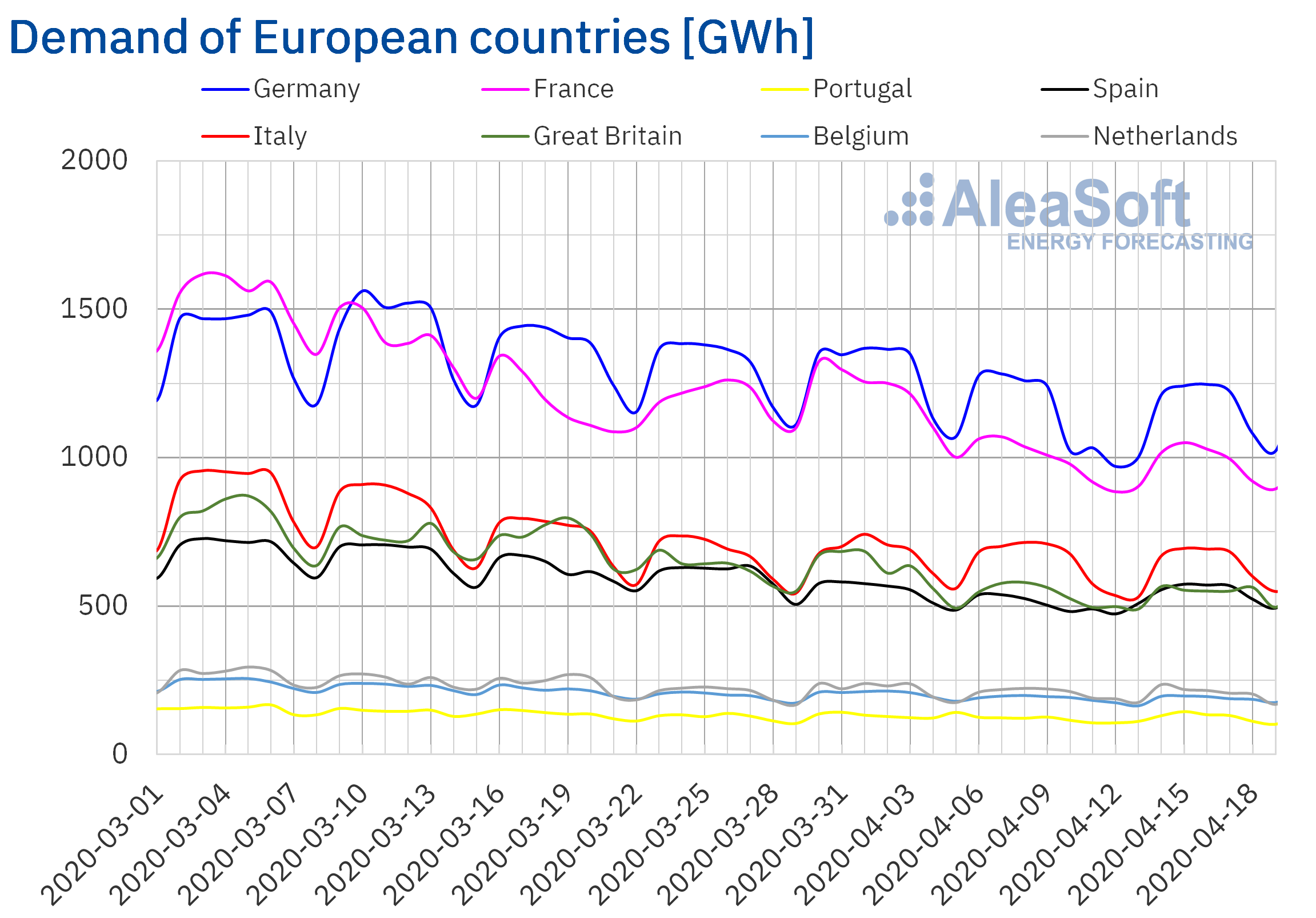 The exceptions were in the Iberian market, where the electricity demand increased by 5.0% in Portugal and 6.9% in Spain. In the case of Portugal, this increase was due to the recovery in electricity demand after Easter and colder temperatures, while in Spain the increase was due to the return to work of some non‑essential sectors. In both countries the influence of Easter Monday was less, as it was a holiday only in some of their regions. 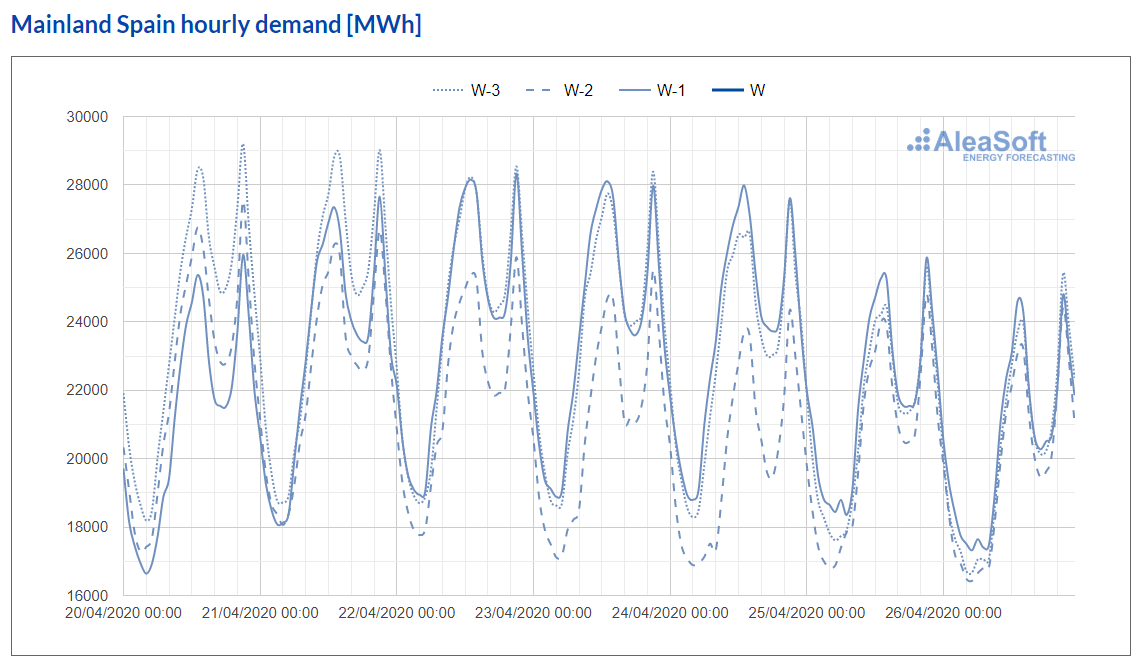 At the AleaSoft observatory the behaviour of the electricity demand in the main European electricity markets with daily updated data can be analysed.

As the containment measures are relaxed, something that was announced by some countries such as Italy and Germany for the coming weeks and early May, the demand will gradually increase.

Last week the average prices of all the European electricity markets analysed at AleaSoft fell compared to those registered the previous week. The markets in which the largest price falls occurred were the EPEX SPOT of Belgium, France and Germany, with declines of 34%, 31% and 29%, respectively. In contrast, the Nord Pool market of the Nordic countries, the IPEX market of Italy and the N2EX market of Great Britain registered the smallest variations, of ‑3.7%, ‑5.2% and ‑15% respectively. 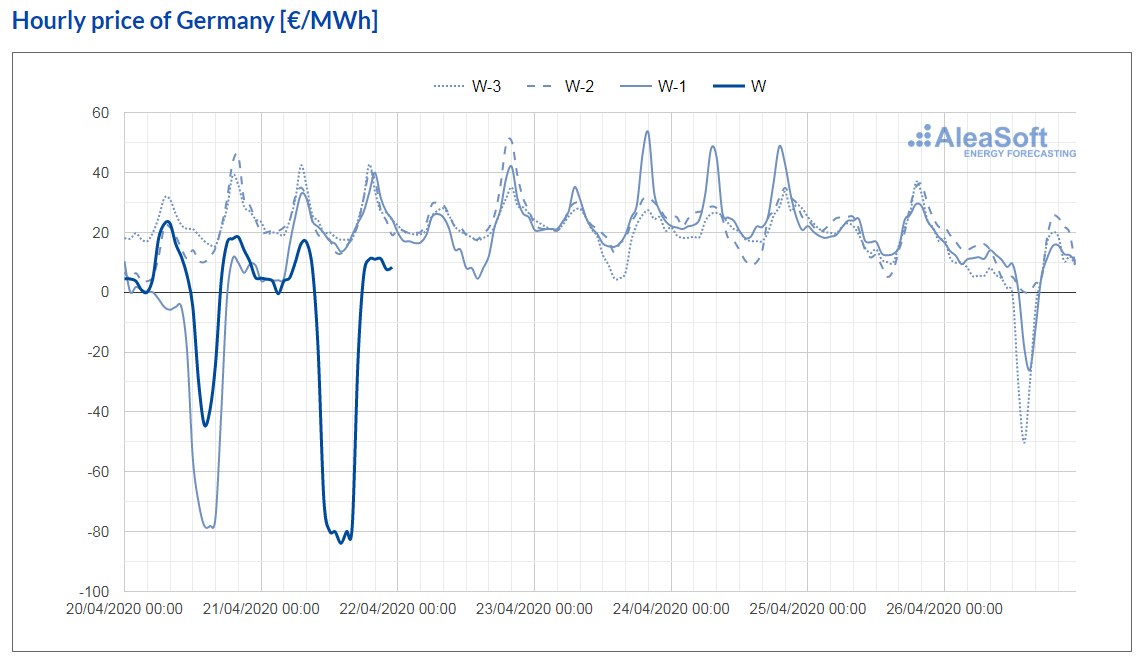 The decrease in average prices of last week is mainly due to the increase in wind energy production and the fact that in many European countries April 13, Easter Monday, was a holiday. On the other hand, the fall in prices is also related to the low levels of demand associated with the measures to curb the spread of the coronavirus and to the decrease in the gas, coal and CO2 emission rights prices. 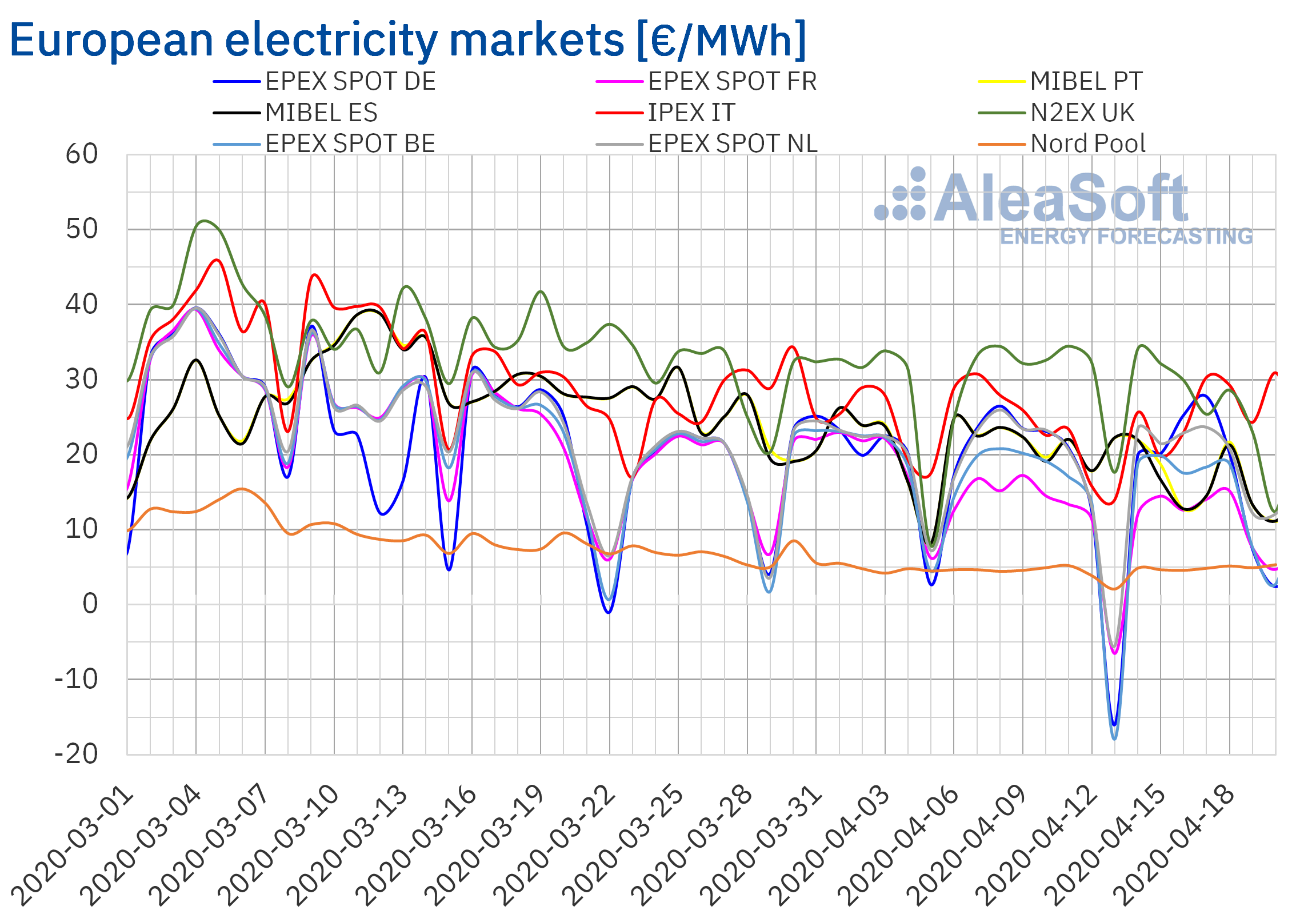 The AleaSoft’s price forecasting indicates that this week the prices will increase compared to those of last week in the markets of Belgium, France, Italy and the Netherlands. The evolution of the prices in the European electricity markets will continue to be influenced by the low demand due to the COVID‑19, the renewable energy production, which will decrease in some countries this week, and the low gas and coal prices.

After starting a clear decline during the first days of the week of April 13, the electricity futures prices for the next quarter began to rise in all the markets analysed at AleaSoft, ending last week above the settlement of the previous week. The minimum was reached right in the middle of the week, in the session of Wednesday, April 15, but in the following two sessions the rise was such in all markets that the session of April 17 settled with prices higher than those of the session of April 9. The EEX market of France was the one with the highest rise with a 17% increase, while the market with the least variation was the ICE market of Great Britain, with 0.9%.

Regarding the electricity futures prices for the next year, they also registered a behaviour similar to that of the prices for Q3‑2020. After the first three days of last week registering decreases, in the last two sessions of the week the price rose sharply, ending with increases compared to the settlement of the previous week. In this product, the NASDAQ market of the Nordic countries was the one with the greatest variation, with 8.8%. On the other hand, the EEX market of Spain along with the ICE market of Great Britain were those with the least change, with a 0.8% difference compared to the session of April 9.

The Brent oil futures prices for the month of June 2020 on the ICE market most of last week were below $30/bbl. The agreement reached on Sunday, April 12, by the OPEC+ member countries to reduce the production from May allowed a settlement price of $31.74/bbl to be reached on Monday, April 13. But on April 14, the IMF published its GDP forecasts, which predict a significant decline in economy worldwide, and the prices fell below $30/bbl, a level at which they remained the rest of the week. On Wednesday, April 15, the minimum settlement price of the week, of $27.69/bbl, was registered, 16% lower than that of the previous Wednesday. On the last days of the week, the prices recovered slightly to reach a settlement price of $28.08/bbl on Friday, April 17. At the session of this Monday, April 20, the prices remained below $28/bbl most of the time. The prices are expected to remain at similar levels in the coming days, as the demand remains low due to the measures taken worldwide to curb the expansion of the coronavirus and the new cuts will not begin until May.

The TTF gas futures in the ICE market for the month of May 2020 on Monday, April 13, reached a settlement price of €7.28/MWh. But, subsequently, the prices fell until settling on Wednesday, April 15, at €6.65/MWh, the lowest value in the last two years. At the end of last week, there was a recovery and the settlement price of Friday was €6.99/MWh.

Regarding TTF gas prices in the spot market, last week they remained stable below €7/MWh. The maximum index price of the week, of €6.98/MWh, was that of Friday, April 17. While last weekend the minimum index price, of €6.74/MWh, was registered. This price is the lowest in the last 15 years. This April 20 the index price is slightly higher, of €6.80/MWh.

On the other hand, the API 2 coal futures in the ICE market for the month of May 2020 most of last week remained below $46/t. On Wednesday, April 15, the lowest settlement price of the week, of $45.00/t, was reached, which was 5.0% lower than that of the previous Wednesday and the lowest in the last two years. On Thursday and Friday the prices recovered, reaching a settlement price of $45.80/t on Friday.

As for the CO2 emission rights futures in the EEX market for the reference contract of December 2020, on Tuesday and Wednesday of last week they registered settlement prices below €20/t. But, from Thursday they began to recover. That day the price increased 8.7% compared to Wednesday. On Friday, April 17, although the daily increase was less, of 3.7%, a settlement price of €21.70/t was reached. This price is the highest since those registered in the first half of March.

The upward trends in the gas, coal and emission rights futures prices of the end of last week were favoured by the announcement of a reduction in nuclear energy production in France this year as a consequence of changes in the scheduled maintenance of the reactors due to the coronavirus crisis. 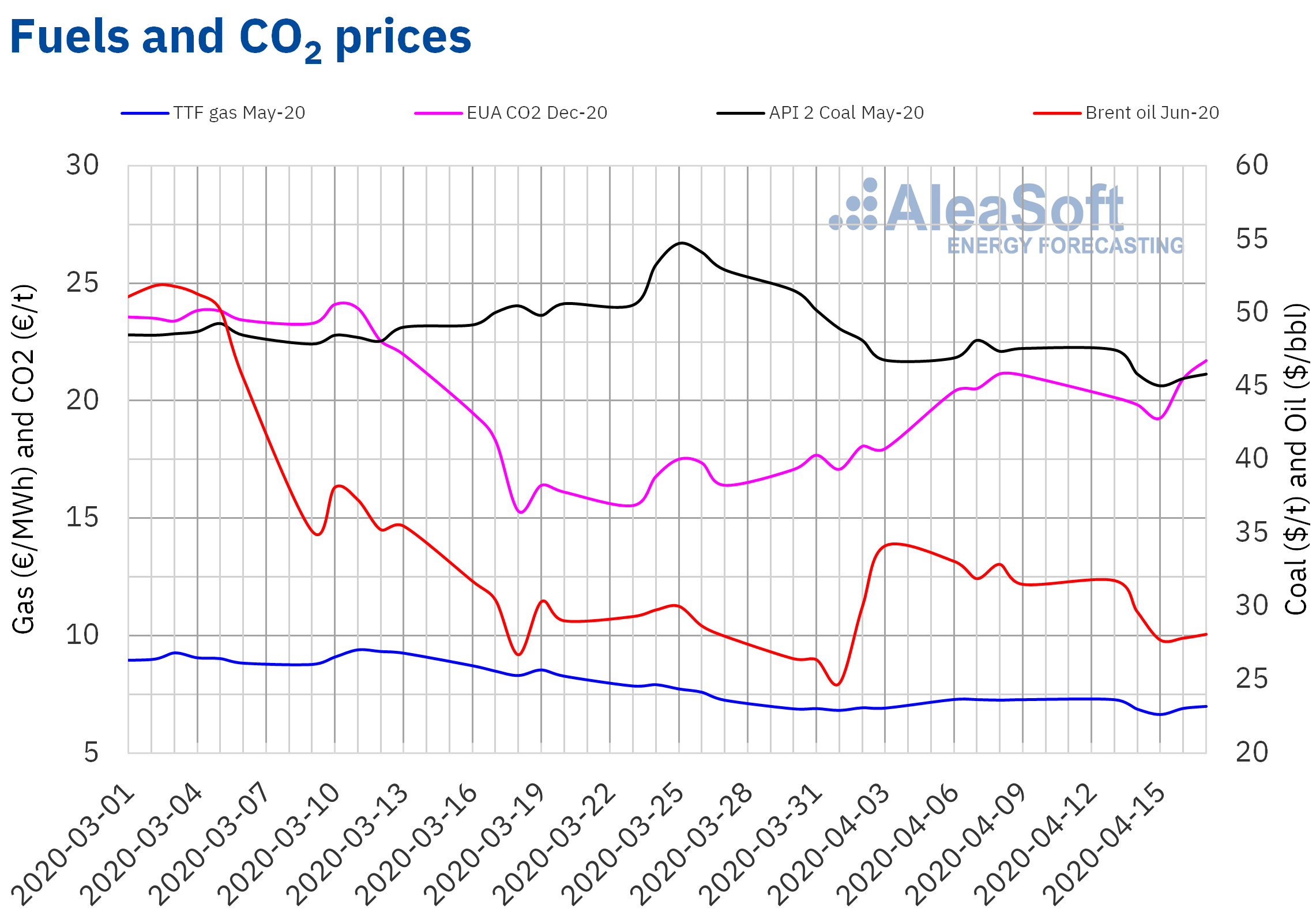 On the other hand, an observatory was created on the AleaSoft website where it is possible to track the demand and the prices of the main European electricity markets with daily updated data.