Nuclear technology was at the base of the electricity generation mix in Mainland Spain for more than fifty years, covering around 22% of the demand during the last decade. Now, with the energy transition towards a 100% renewable energy generation mix, there is a calendar for the closure of the entire Spanish nuclear energy park, agreed with all the companies that own the reactors. That the closure is done in a planned, orderly and progressive manner is important so that it does not affect the electricity market in a negative way.

In recent weeks, with the announcement of the French Prime Minister of committing to the construction of new nuclear power plants in the Gallic country, the debate on nuclear technology in Spain returned to the headlines. 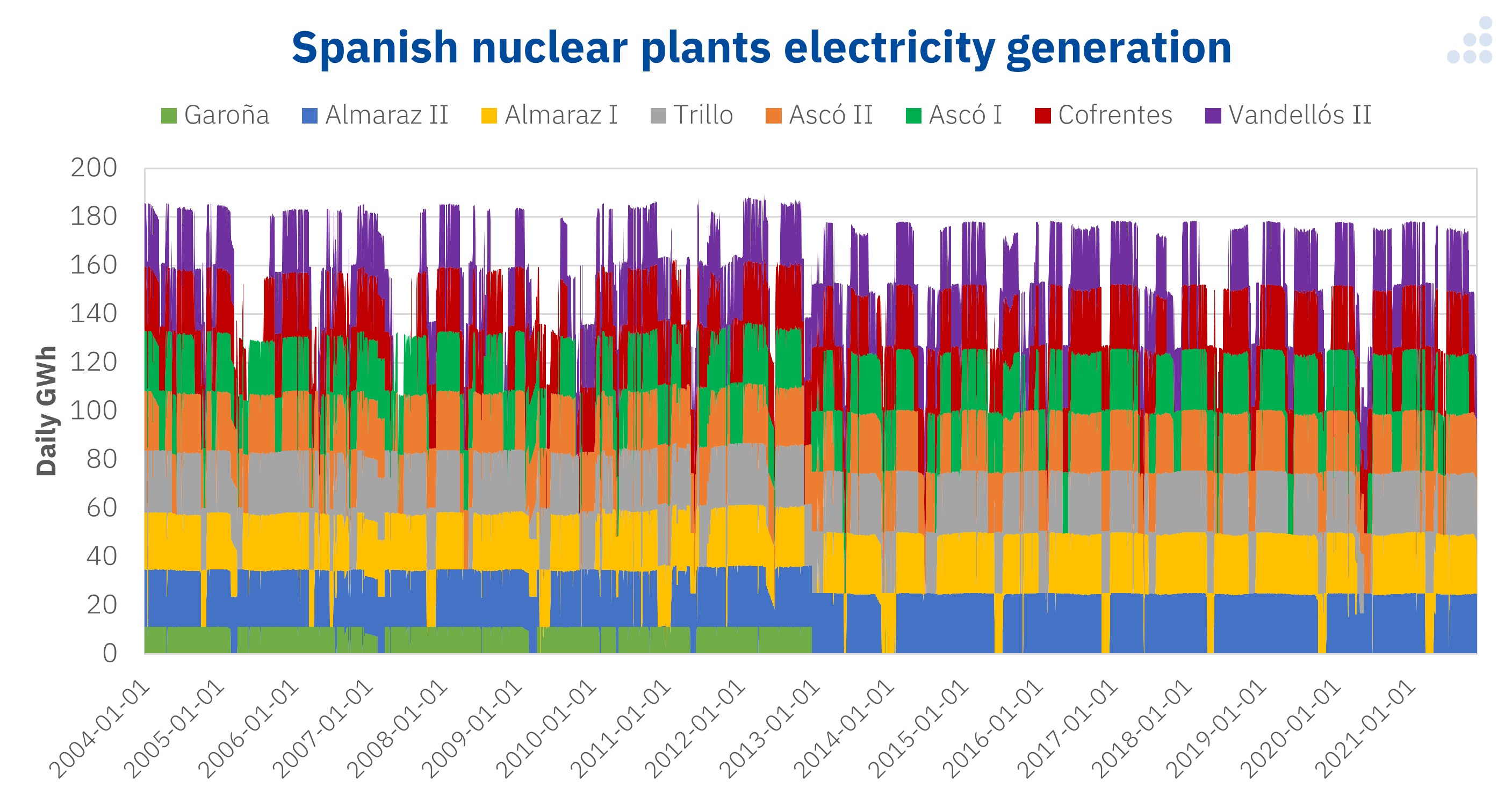 The two sides of the nuclear energy debate in Spain

The debate on the future of nuclear energy in Spain has two parts that can and should be addressed separately, although, obviously, they are closely related. On the one hand, there is the debate on whether building new plants in Spain is necessary. There are sectors, experts and even political parties that are in favour of increasing the nuclear energy park in Spain with new plants.

The arguments in favour of expanding the nuclear energy capacity in the country are based on how nuclear energy can help reduce CO2 and greenhouse gas emissions more quickly, and reach neutrality in emissions by 2050, the main objective of the fight against the climate change.

According to AleaSoft Energy Forecasting, this facet of the debate is not very relevant. While it is true that nuclear energy is a low‑emission technology that can help decarbonise and achieve the neutrality by 2050, the necessary investment and the CAPEX are very high and the construction of new plants is slow. Compared with renewable energy technologies, such as wind and photovoltaic energy, the construction time, as well as the CAPEX and the OPEX of the nuclear energy are much higher.

In addition, deciding to build new nuclear power plants now would mean having them as of 2035, 2040 or 2045. With the growth rate of renewable energy that is being experienced and that is expected in the peninsular territory, surely all this new generation capacity won’t be necessary by then.

Additionally, the construction of new plants would face the problem of where locating them, since the general feeling of the population is not to want nuclear power plants near their homes. Likewise, although the storage of nuclear waste from power plants is a technically resolved issue, there is broad social rejection of the construction of the necessary warehouses for it. A clear example is the centralised temporary warehouse (ATC, its acronym in Spanish) project that is currently paralysed.

The debate on the closure of the current plants

The other facet of the debate is the closure of the plants currently in operation. Spain has seven nuclear reactors in operation with a total capacity of just over 7 GW and which cover around 22% of the demand in Mainland Spain. The current closure schedule, agreed with the owner companies, implies the closure of the seven units between 2027 and 2035.

According to AleaSoft Energy Forecasting, although the calendar is a closed agreement that none of the parties, for the moment, showed an intention to reopen, when the time comes for the closures, the debate will reopen. It depends on how the new renewable energy capacity progresses, the decarbonisation, the demand and the gas and CO2 prices, the pros and cons of closing or keeping the plants operating for a longer time should be assessed. 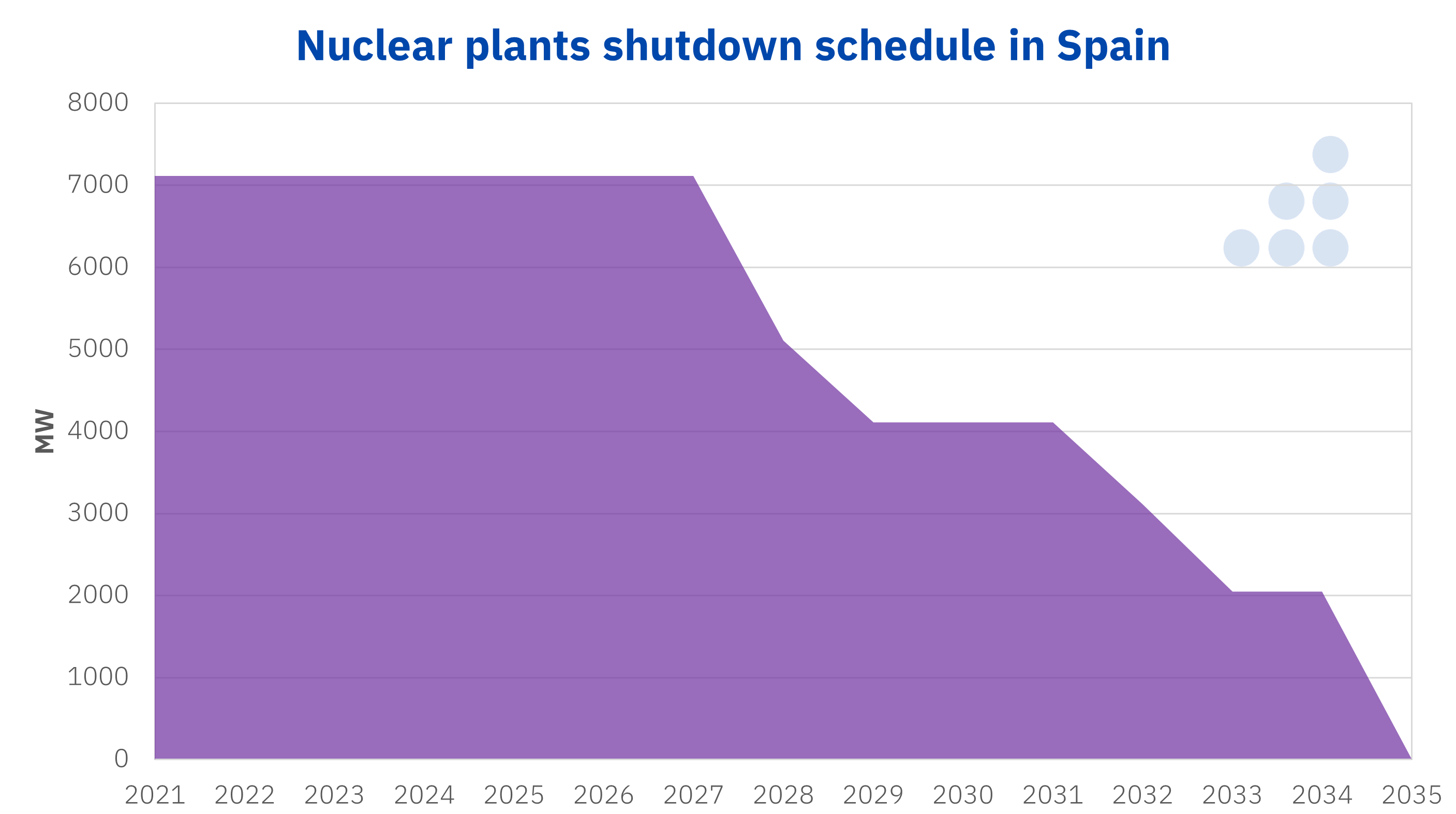 The fact of closing a nuclear power plant will mean, at least temporarily, an increase in CO2 emissions as combined cycle gas turbine plants will have to cover the gap it will leave in the production mix. How much they will increase or for how long will depend on the renewable energy capacity available at that time and how other factors, such as the electricity demand or the capacity of energy storage technologies, evolve.

The closure of the nuclear power plants will also have an impact on the electricity market and its prices. That is why it is very important that the closure of the units is progressive and agreed in advance.

The closure of nuclear power plants in some European markets such as Spain and Germany will have an impact on European electricity markets prices, as will the new plants that are to be built in France and other countries. To have a future vision of energy markets in Europe, at AleaSoft Energy Forecasting, long‑term market prices forecasts with hourly granularity are available, which are necessary for the models of renewable energy projects financing.

To follow the evolution and prospects for energy markets in Europe, AleaSoft Energy Forecasting is organising the next webinar that will take place on January 13, 2022. This first webinar of the year will feature the participation of speakers from PwC Spain, who will analyse how the regulatory and electricity market situation impacts the development of PPA, both off‑site and on‑site.