AleaSoft, August 20, 2021. The first half of 2021 in Italy clearly showed the recovery from the economic crisis in the electricity market, where demand recovered the values prior to the COVID‑19 pandemic. High gas and CO2 prices caused high prices in the IPEX market, which reached maximum of the last five years. Italy is especially susceptible to gas prices as it is the leading producer of electricity with this fuel in Europe. It should be noted that self‑consumption covered almost a tenth of the demand from January to June 2021.

Italy’s IPEX market is one of the highest priced European markets. As in the rest of the continent’s markets, during the first half of 2021 its prices registered an increasing behaviour, remaining throughout the period as the second highest‑priced market, behind the N2EX market in the United Kingdom.

The price of electricity in this market during the first six months of 2021 averaged €66.96/MWh. This figure represents a 47% increase compared to the previous six months and, in turn, is more than double the average price of the same period of 2020. The price in the first half of 2020 was on average €32.21/MWh, therefore the year‑on‑year growth was 108%. 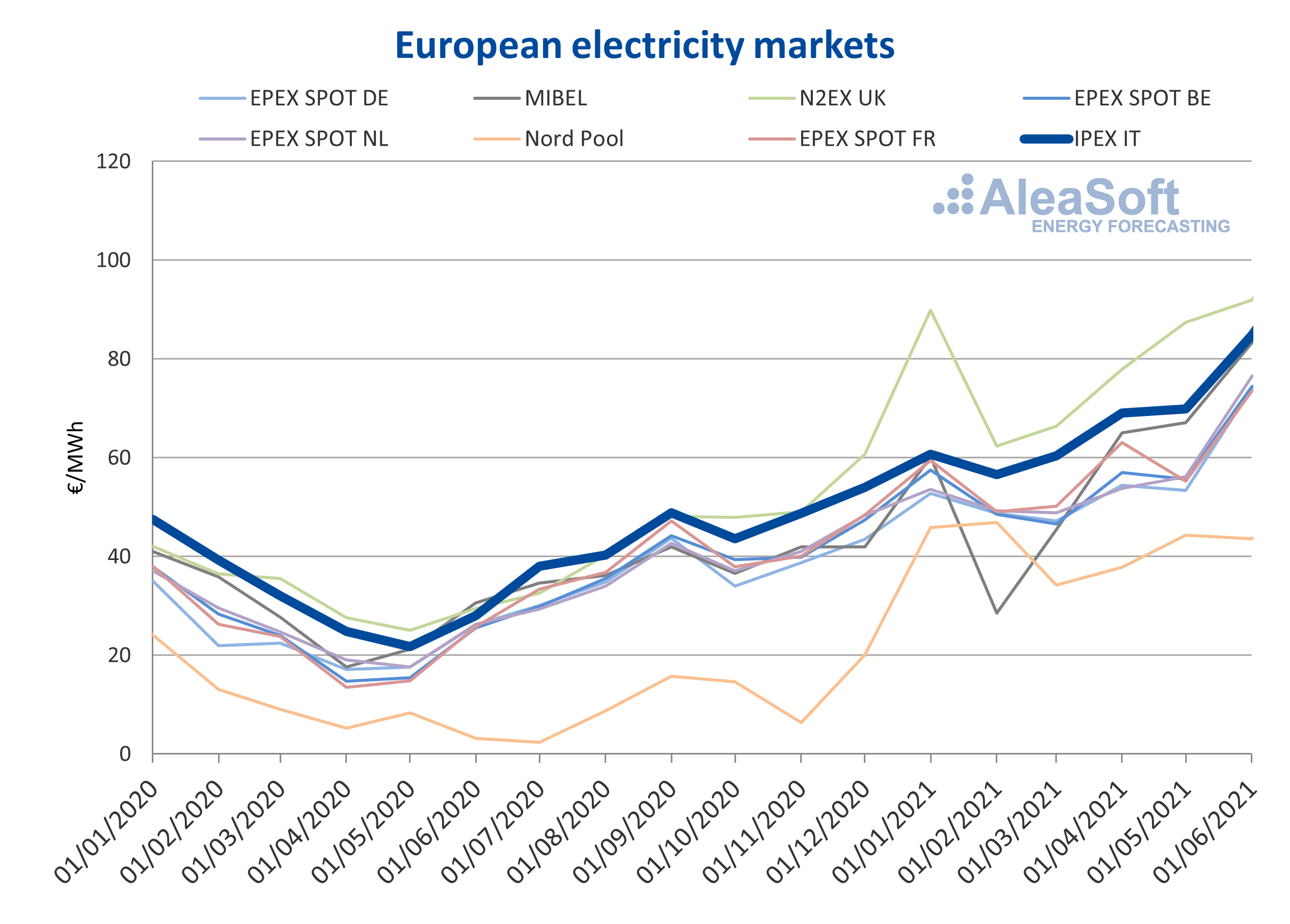 The maximum daily price reached in this period was €112.11/MWh on June 29. This figure was, on its date, the highest daily price since July 2015. The high prices registered by the end of June, and in general since the beginning of spring, were mainly due to high gas and CO2 emission rights prices that triggered the prices of the European electricity markets.

Also on a monthly level, important records were observed in the first half of 2021. The average price for the month of June was €84.80/MWh, which made it the month with the highest price since August 2012. 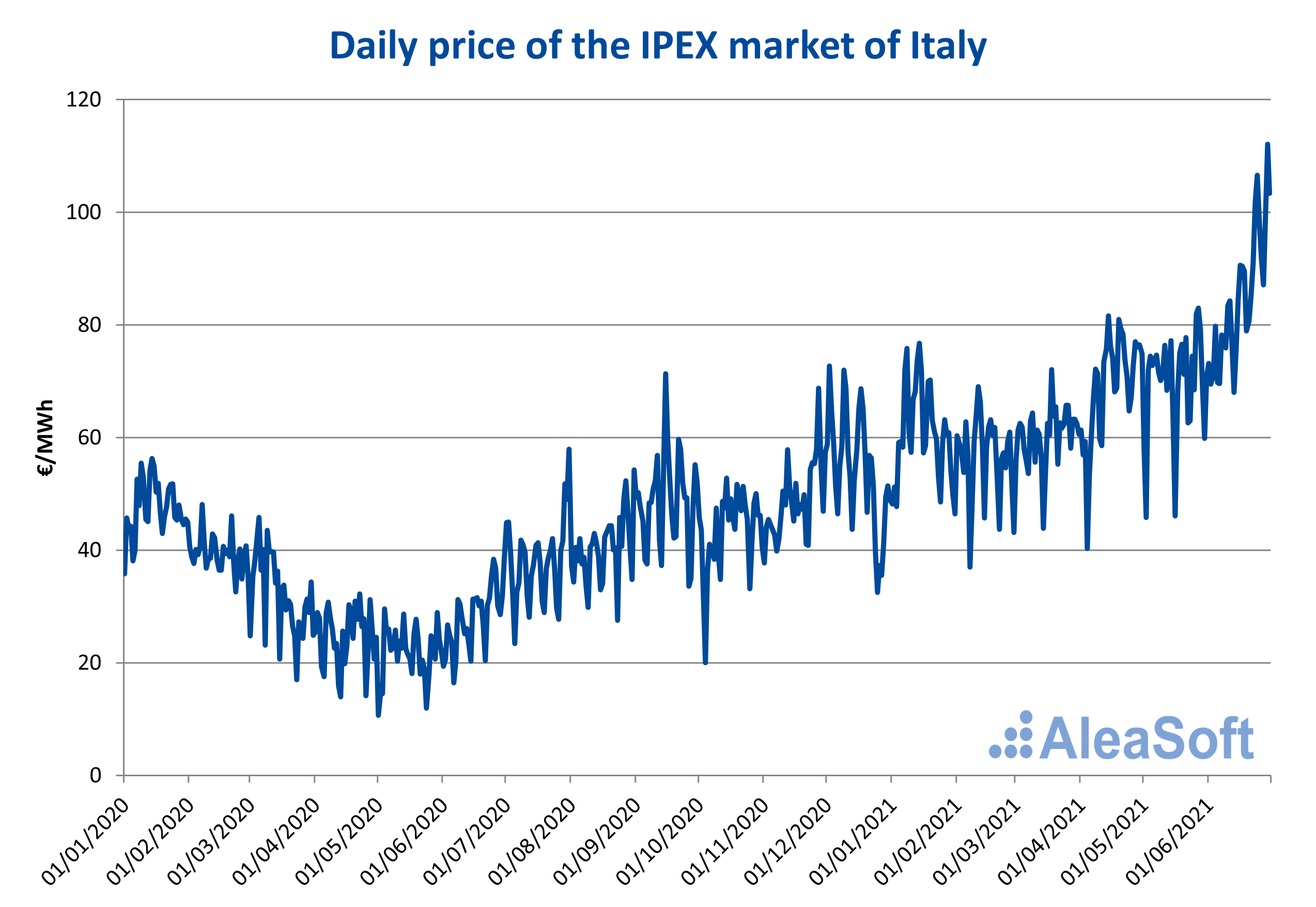 Italy’s national electricity demand during the first half of 2021 recovered from its levels during the most critical part of the pandemic. In total, in this period, a demand of 155 TWh was registered. This value is 2.8% lower than the previous semester, but 8.0% higher than the same semester of 2020, which was the period most affected by the lockdowns to stop the spread of COVID‑19.

If the second quarter of 2021 is specifically analysed, which corresponds in year‑on‑year terms with the dates of the greatest movement restrictions in Italy and in the rest of European countries, the increase in demand was 14%. 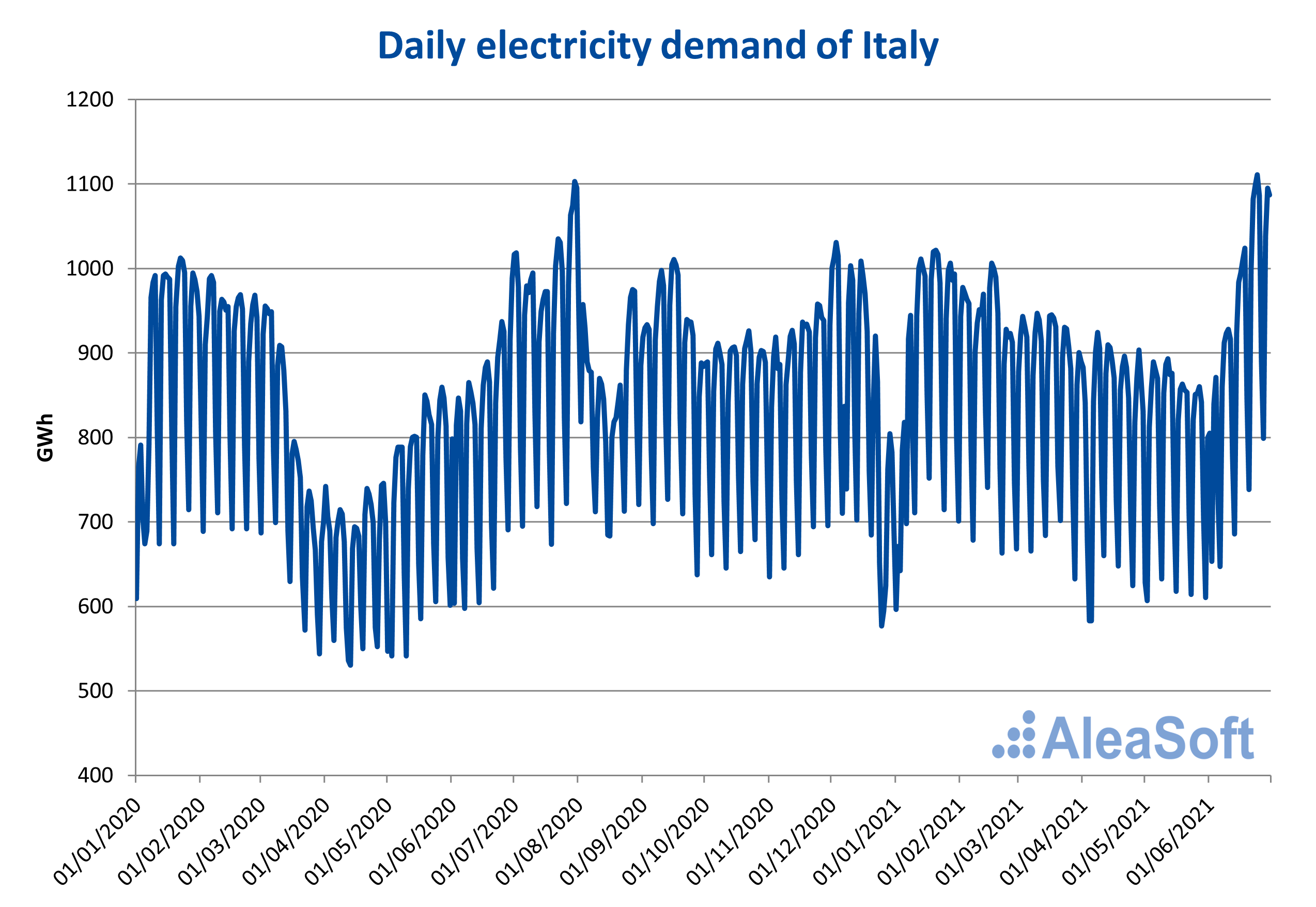 Specifically, in June 2021 there was a markedly growing behaviour in the Italian electricity demand, which led to the maximum recorded. This increase in demand in the summer months is common in the Italian market due to increased temperatures.

Italy is the largest producer of electricity from gas in Europe. Generation with gas represented 46% of generation in the country during the first half of 2021. This type of production registered a year‑on‑year increase of 5.4%. However, it registered a negative variation compared to the previous semester, which was 15%. On the other hand, coal production represented 4.5% of the generation mix and decreased compared to the first and second semesters of 2020, by 3.9% and 18% respectively. 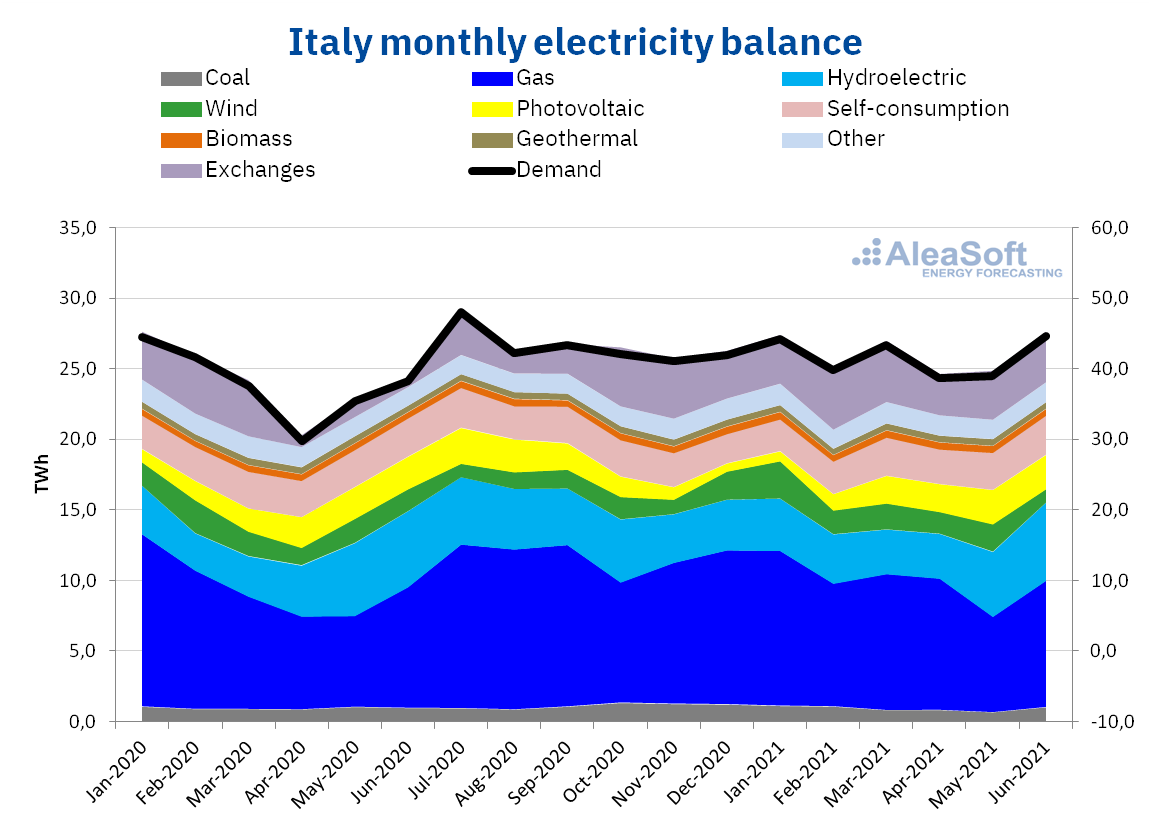 Renewable energies are one of the Italian nation’s stakes for the energy transition by 2050. The country has the goal of covering 55% of electricity demand with these technologies in 2030. Hydroelectric energy led this section during the first six months 2021 with a 20% share of generation. During this period there was a year‑on‑year increase of 2.5% and a decrease of 3.7% compared to the second half of 2020. The results of wind energy production for the first six months of 2021 were positive, with increases of 3.6 % and 31% compared to the first and second halves of 2020 respectively. Photovoltaic energy production had a different path, which fell 0.4% in year‑on‑year terms and increased 11% compared to the previous six months.

Self‑consumption continues to evolve in Italy and is one of the technologies promoted in the Italian NECP (Piano Nazionale integrato per l’Energia e il Clima) that favours the use of renewable energies in the generation of electricity. During the months of January to June 2021, self‑consumption covered 9.8% of the country’s total demand.

Other energies such as biomass and geothermal had less participation in the overall generation of Italy, contributing from January to June 2021 only 2.5% and 2.3% respectively. Electricity from biomass rose 7.9% compared to the first six months of 2020 and 1.5% compared to the second half of 2020. On the contrary, geothermal energy registered falls of 3.5% and 2, 1% in those periods compared respectively. 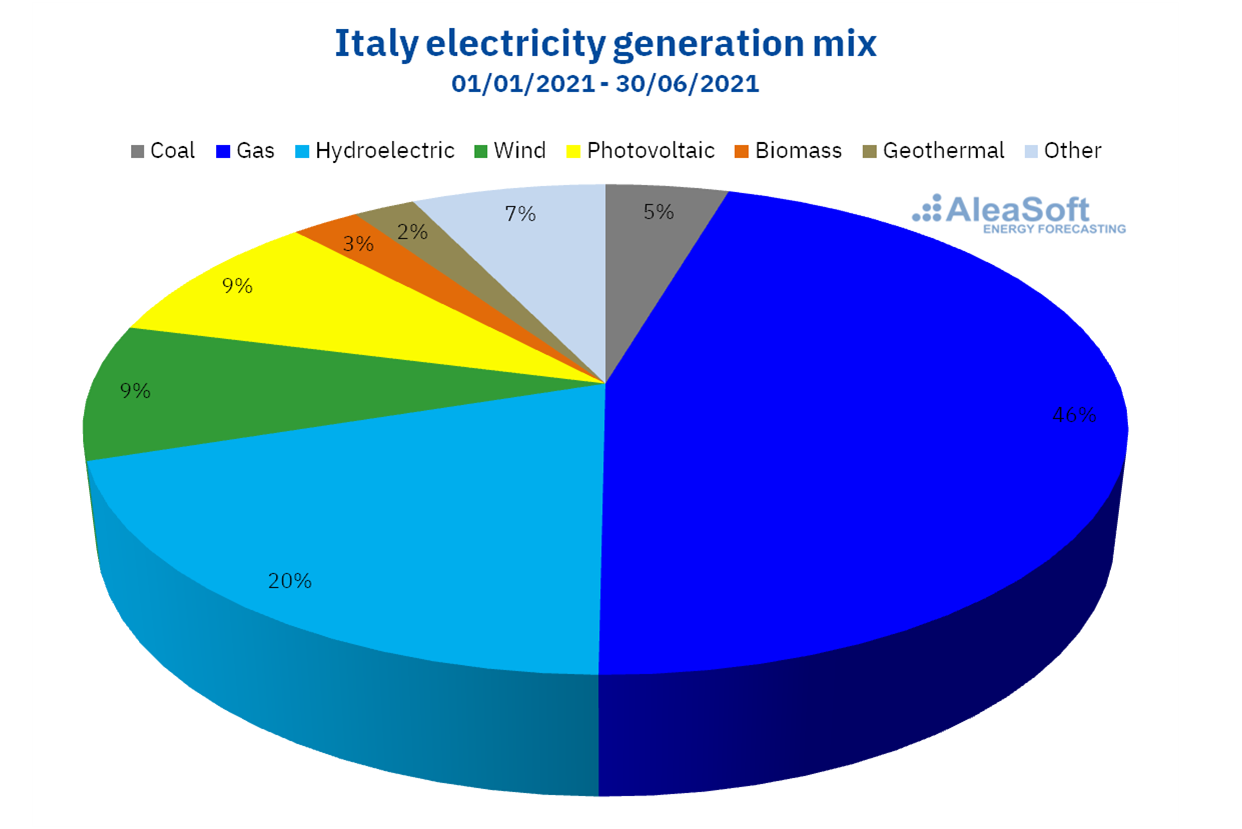 During the first half of 2021, electricity futures prices for calendar year 2022 registered a fundamentally increasing behaviour. Except for a setback in the second half of May, the trend was generally upward throughout the period. Between the first and last sessions of the first half of 2021 there was an increase of 47%, settling on June 30 at €80.41/MWh. In absolute terms, this increase was €25.74/MWh. 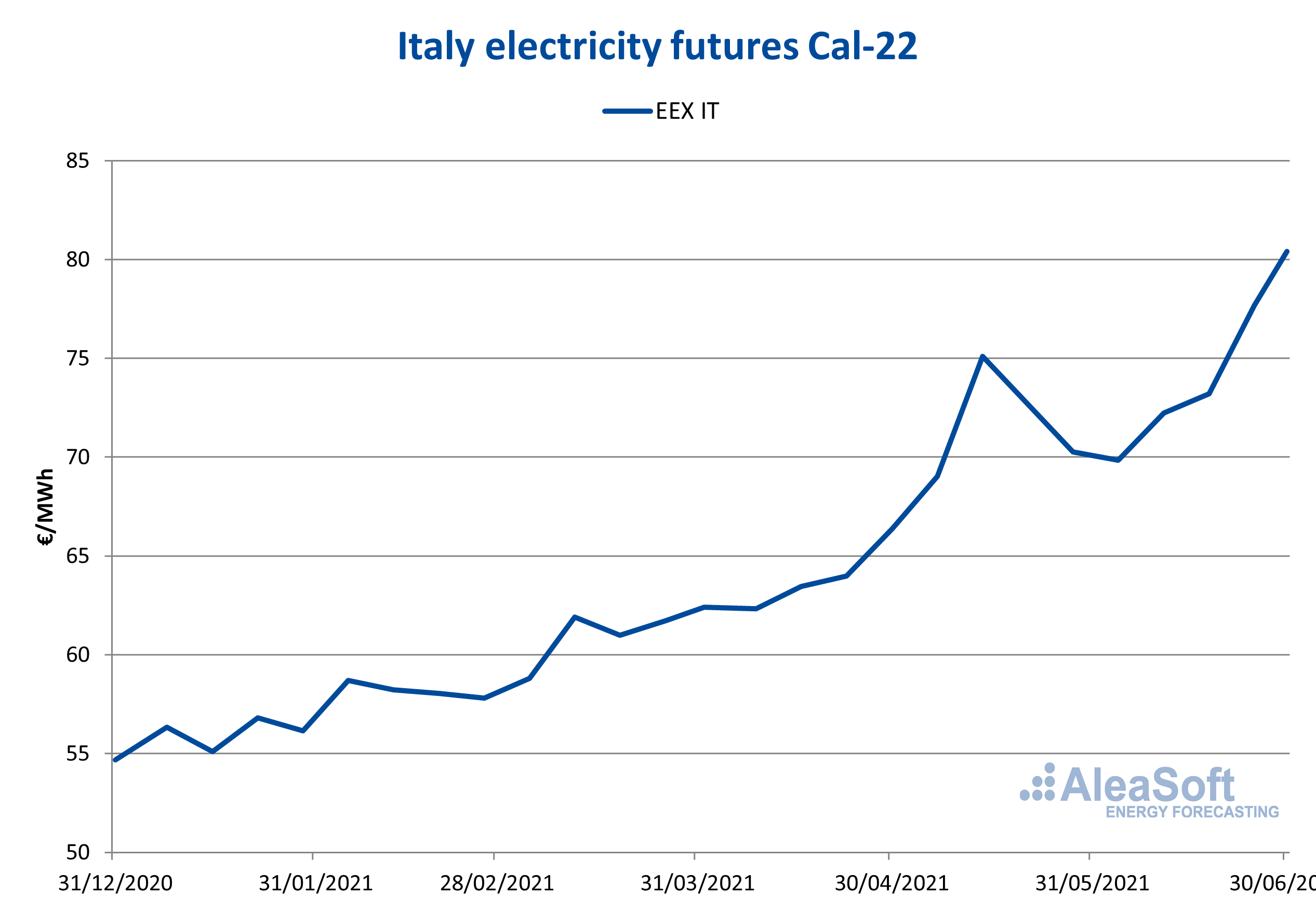 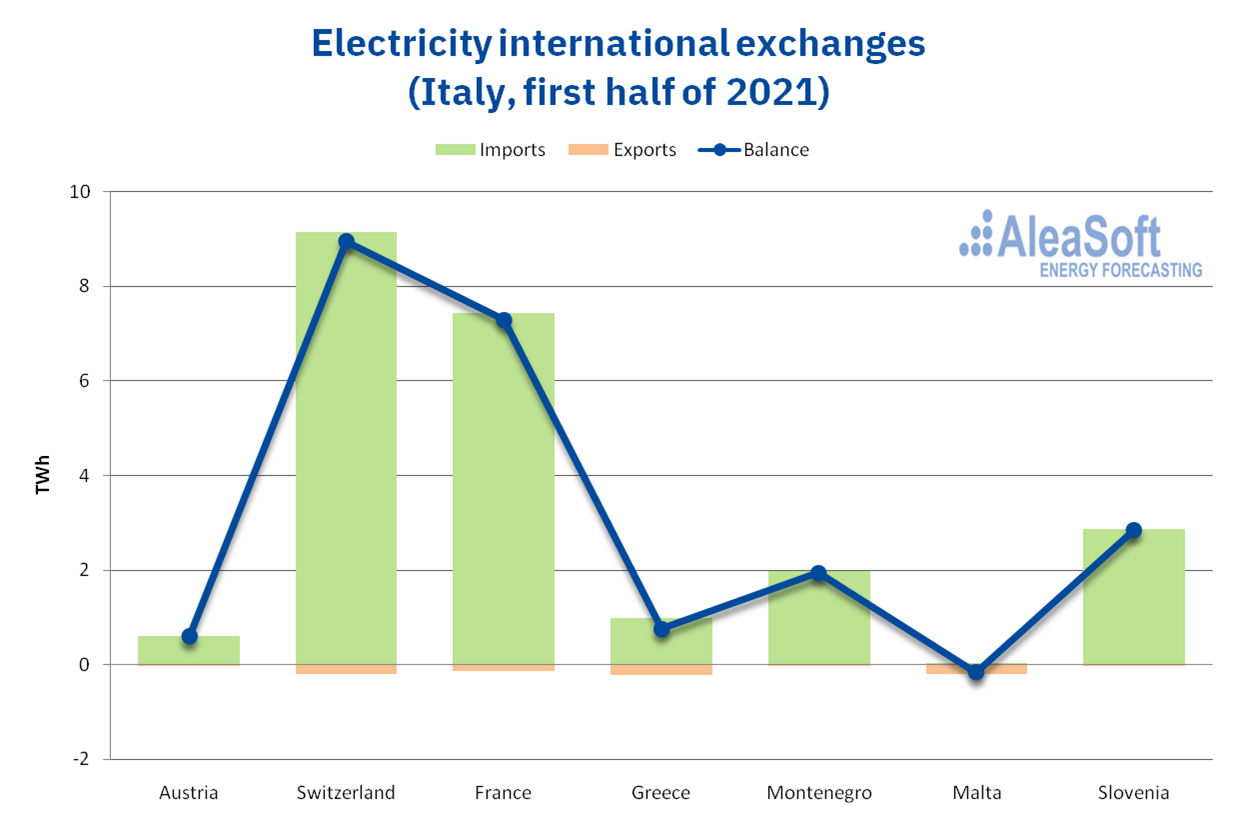 The year 2021 has been the moment of the exit of the European electricity markets from the economic crisis that accompanied the health crisis of the coronavirus. However, it has also been a year characterised by high prices in the European energy markets. In these scenarios it is very important to have information that allows estimating the market trend in the mid‑ and long‑term. At AleaSoft, a special promotion of our long‑term forecast reports was created for most European markets, including Italy.

On October 7, a webinar will be held at AleaSoft together with Deloitte speakers in which the markets after the economic crisis will be analysed one year after the webinar that was held with the same speakers in October 2020. The main points to be discussed will be the evolution of the markets, the renewable energy projects financing and the importance of the forecasting in the audits and in the portfolio valuation.