AleaSoft, August 23, 2021. The prices of most of the European electricity markets fell in the third week of August favoured by an increase in wind energy production. Gas and CO2 started the week setting historical records but the rest of the days their prices fell, also leading to declines in the electricity futures markets. In some markets, increased solar energy production added to the factors that helped drive prices down. Brent oil prices were also down throughout the week.

Solar energy production registered increases in most European markets in the week of August 16 compared to the previous week. In the Iberian Peninsula there was a recovery of 14% while in Italy it continued to rise, this time with an increase of 3.0%. For their part, the markets of France and Germany registered declines of 37% and 20% respectively.

According to AleaSoft‘s solar energy production forecasting, it is expected to decrease in Spain and Italy during the week of August 23. 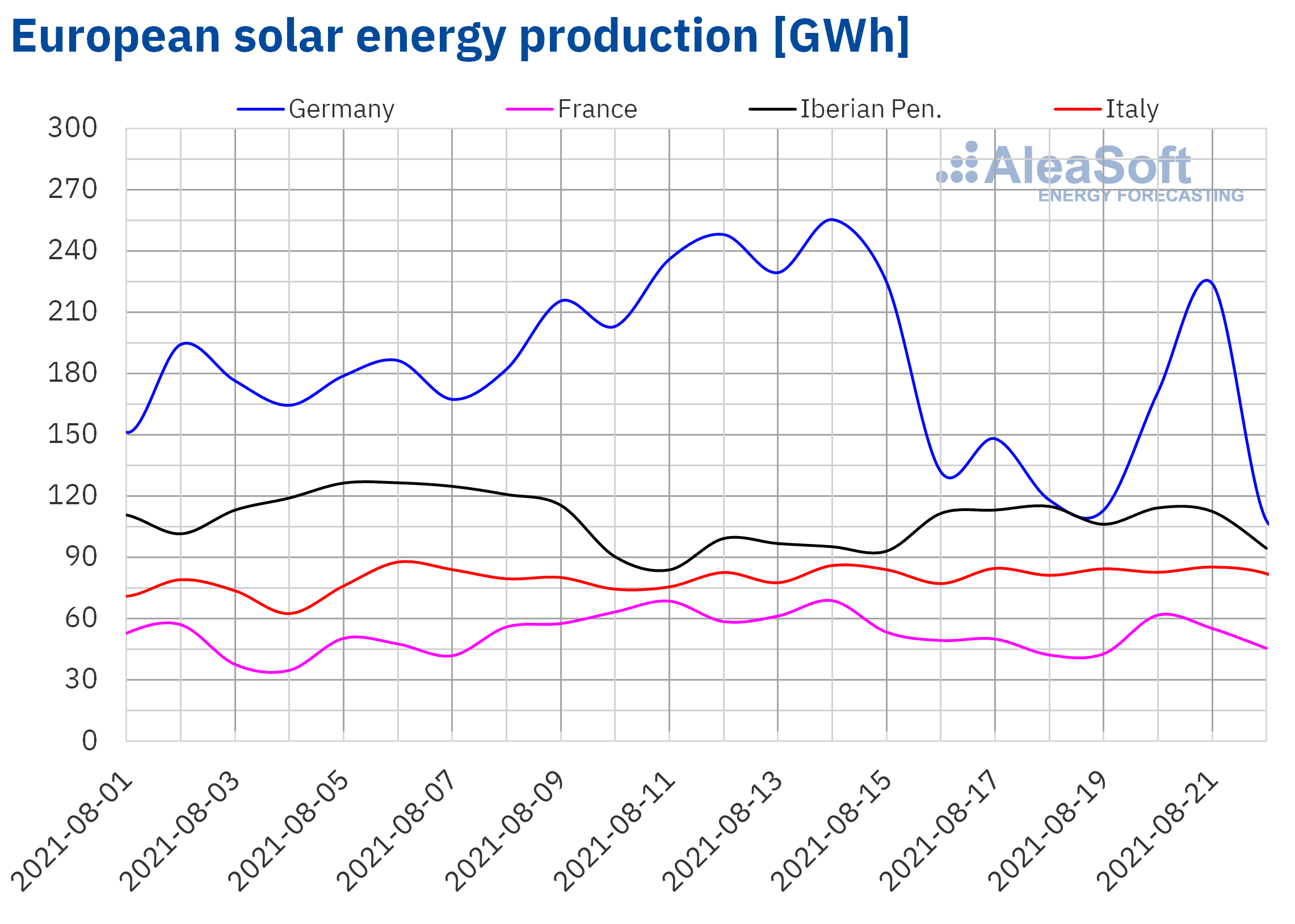 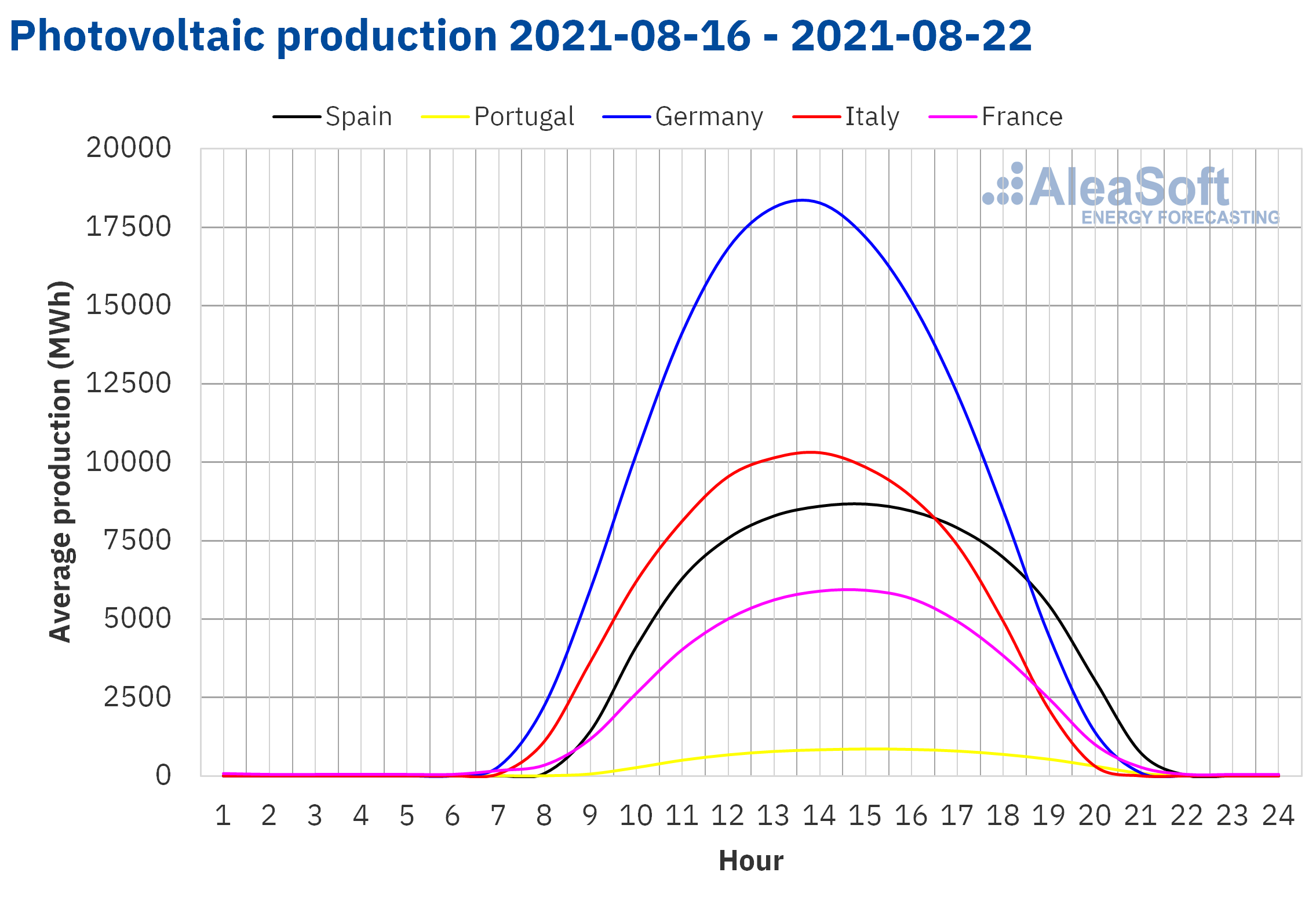 Wind energy production had a general increase in the whole of the days of August 16 to 22 compared to the previous seven days, thus recovering from the falls of the previous week and with significant increases that exceeded 40% in all markets. The German market registered the most significant rise which was 87%. The promotions in France, Spain and Portugal were between 60% and 70%. The smallest increase was 42% in Italy.

The generation with this technology is expected to register negative variations in the week of August 16 in most markets on the European continent, according to AleaSoft‘s wind energy production forecasting. 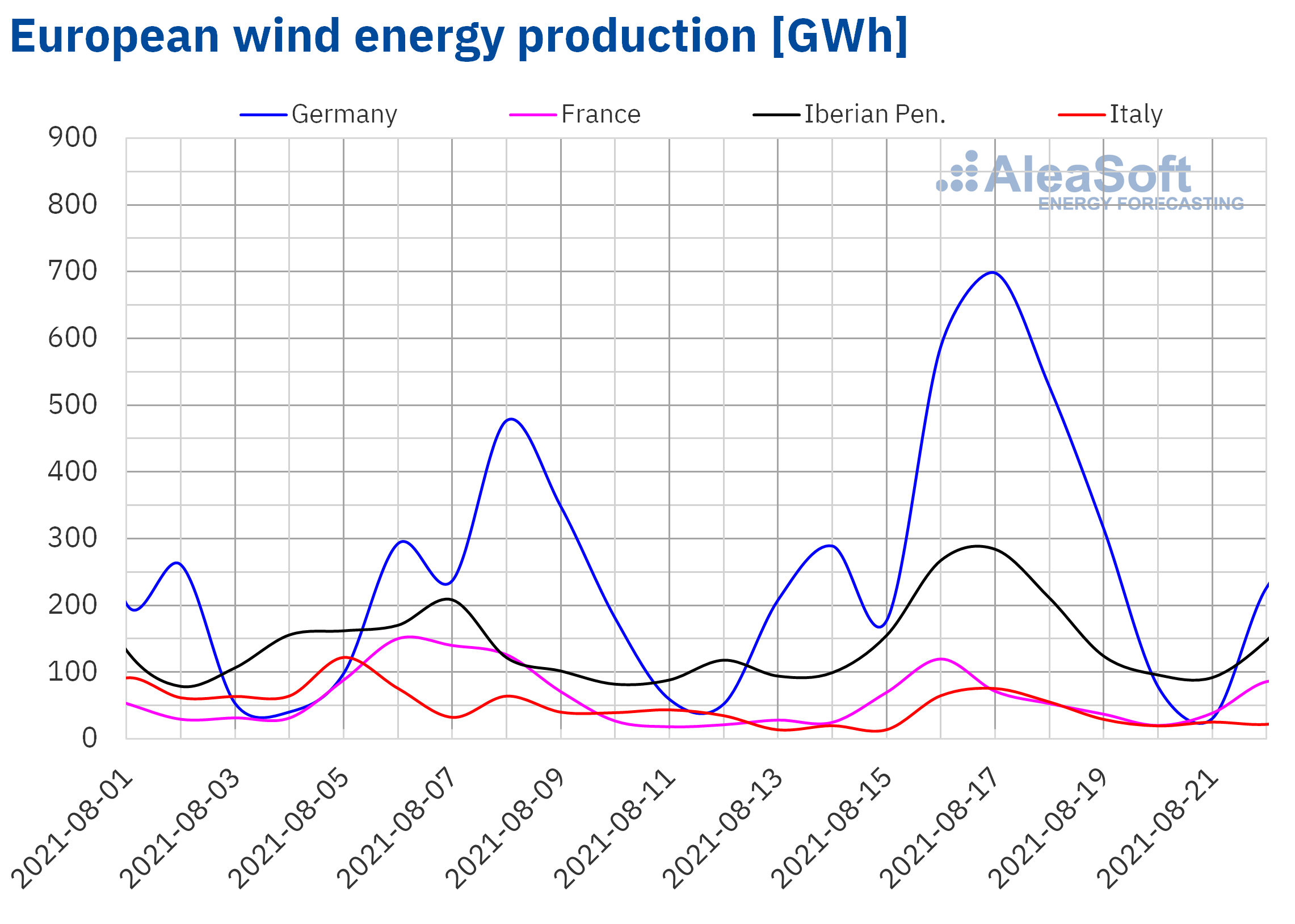 During the week of August 16, a heterogeneous behaviour of electricity demand in Europe was observed. The drop in average temperatures compared to the high values of the week of August 9 favoured the decrease in demand in the markets of the Iberian Peninsula and Italy, decreasing to 4.9% in the Italian market. These drops were more notable during the days from Monday to Saturday in the case of Italy and from Thursday to Saturday in Spain and Portugal, as can be seen in the AleaSoft electricity demand observatories.

In the rest of the markets there were increases in the week of August 16 to 22 compared to the previous seven days. Such were the cases of Great Britain and Belgium, with increases of 6.1% and 4.3%. The neighbouring markets of Germany and France registered increases of 2.0% and 0.4% respectively.

For the week of August 23, AleaSoft‘s electricity demand forecasting indicates that there will be increases in most electricity markets in Europe. 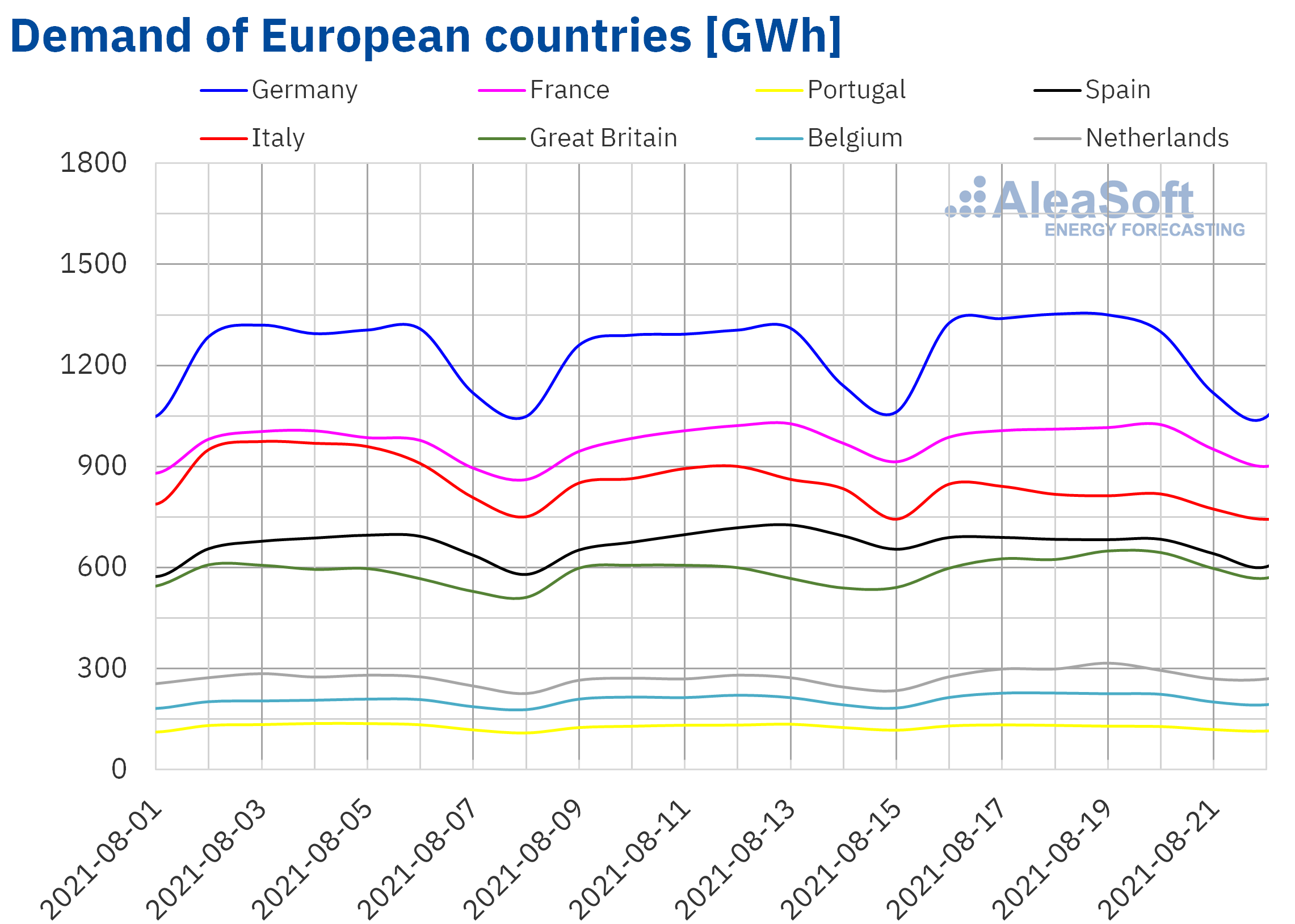 In the third week of August, weekly average prices fell in the EPEX SPOT market of Germany and France, in the MIBEL market of Spain and Portugal, in the IPEX market of Italy and in the Nord Pool market of the Nordic countries. On the other hand, price increases were registered in the UK N2EX market and in the EPEX SPOT market of Belgium and the Netherlands. The market in which prices fell the most was the MIBEL of Portugal, with a decrease of 8.3% compared to the week of August 9. In the group of markets where prices rose, the market with the highest increase was the EPEX SPOT of the Netherlands, with a growth of 5.1% compared to the prices of the previous week.

The average price on August 19 in the UK N2EX market was £129.69/MWh. This value represents the highest price in this market since 15 January when, due to high demand, a price of £154.62/MWh was reached.

In the week of August 16 and mainly from the 17th, the Nord Pool market was the one with the lowest price, notably separated from the rest. Above the prices of this market, and quite closely coupled with each other, all the EPEX SPOT markets analysed in AleaSoft were found. The Iberian and Italian markets followed with a higher price. And finally, clearly separated with the higher prices, there is the N2EX market. 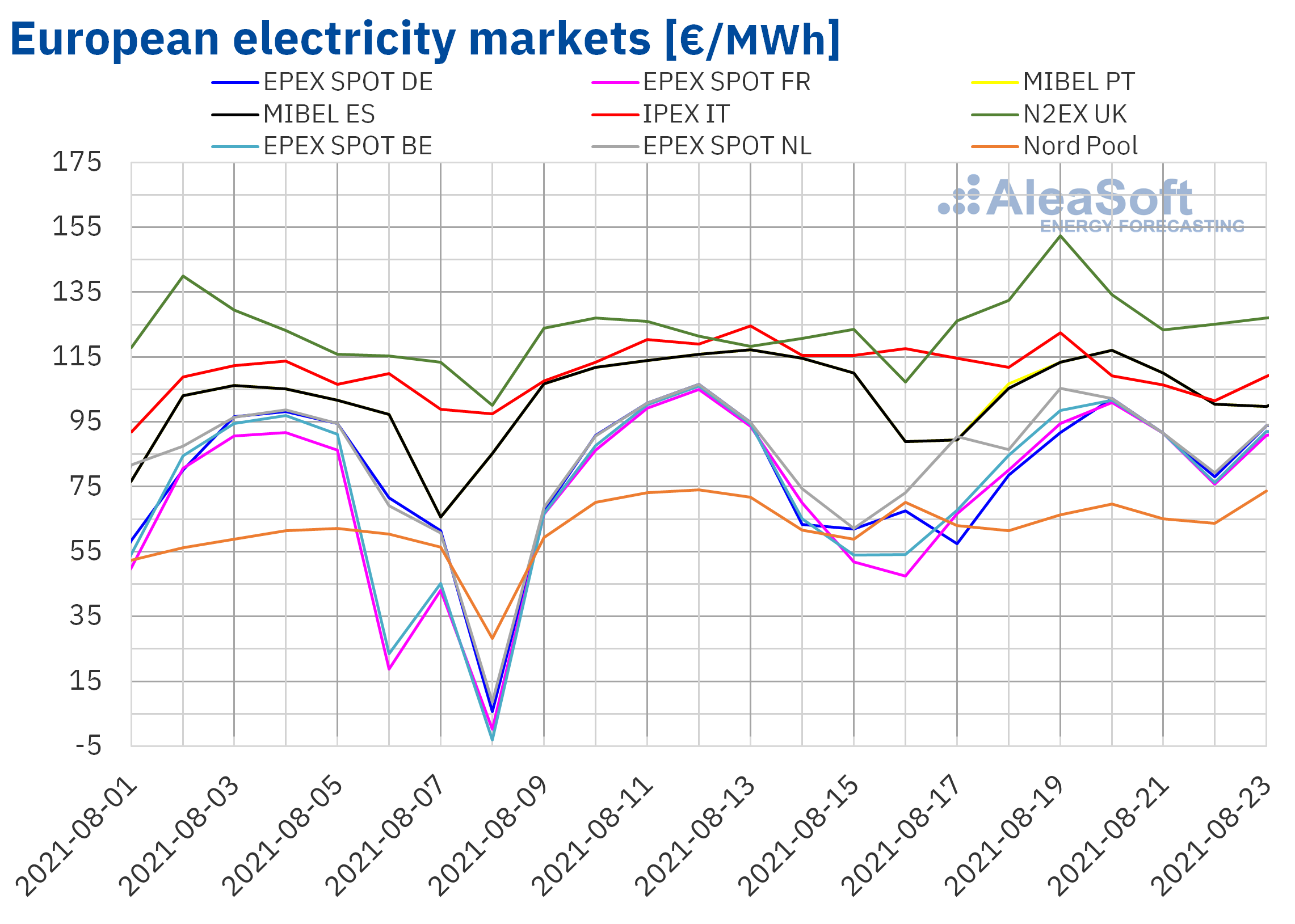 The general increase in wind energy production and the falls in gas and CO2 prices led to the decreases registered in most markets. In the Iberian and Italian markets, increases in solar energy production also favoured price declines. On the other hand, in the United Kingdom, Belgium and the Netherlands, the rise in prices is largely justified by increases in electricity demand.

AleaSoft‘s price forecasting indicates that for the week of August 23, prices in most markets will increase, mainly in the EPEX SPOT market of Germany.

The settlement prices of the European electricity futures for the next quarter fell in the session of Friday, August 20, compared to those of the session of the previous Friday in a generalised way in all the markets analysed at AleaSoft. The biggest drop was in the EEX market of Germany with a decline of 7.9%. There was also a 7.7% drop in the French EEX market. The smallest variations were in the EEX markets of Spain and OMIP of Spain and Portugal, of 2.9% in each case. In the rest of the markets, the falls in the settlement prices of this product ranged between 6.5% and 3.2%.

The electricity futures for the year 2022 also fell in a generalised way if the settlement prices of August 20 are compared with those of the 13 of the same month. In this case, the greatest reduction was registered in the EEX markets of Italy and NASDAQ of the Nordic countries and was between 4.6% and 4.3%. The lowest variations in the settlement prices of this product were in the EEX markets of Spain, OMIP of Spain and Portugal and ICE of the Nordic countries, with a reduction of between 0.9% and 0.7%. In the rest of the markets the decreases were 3.5% and 2.8%.

The Brent oil futures for the month of October 2021 in the ICE market during the third week of August had a strictly decreasing behaviour during the five sessions of the week. In addition, each day the market settled with a price lower than that of the homogeneous day of the previous week, except for Monday, August 16. Finally, the settlement price for the session on August 20 was $65.18/bbl.

Concern about the measures that China could take in the face of the spread of the delta variant of Sars‑Cov‑2 continues to pull prices down in a slightly unbalanced equilibrium with hopes on the vaccination campaigns progress and signs of robust demand in Europe.

The prices of TTF gas futures in the ICE market for the month of September 2021 marked the maximum of the next month’s trading in at least the last eight years, reaching €47.99/MWh on Monday the 16th. After set this record, prices began to decline significantly. The biggest drop occurred between the sessions of Wednesday 18 and Thursday 19, where a reduction of almost €5/MWh was observed. In the last session of the week, on August 20, prices recovered slightly, settling at €41.94/MWh, although this value is €6.05/MWh lower than the price of the first session of the week.

This large drop in Thursday’s session was mainly due to the statement from the Russian energy company Gazprom, in which it announced that Russia plans to supply 5.6 billion cubic meters of gas through the new Nord Stream 2 gas pipeline this year.

Regarding the prices of CO2 emission rights futures in the EEX market for the reference contract of December 2021, something similar happened to what happened with the prices of gas futures. In the first place, a new record of €58.16/t was reached in the session on Monday, August 16. In the following days, prices began to fall to a price of €53.50/t reached on Thursday the 19th and that on Friday the 20th it recovered, settling at €54.37/t.

As for API 2 coal prices for September 2021, on Monday they reached a record price of $151.75/t. This was the highest price of the next month’s contract since September 2008. After this maximum, prices registered a fall that ended up placing the settlement price of the last session at $137.60/t, a value that returns to coal to late July levels. 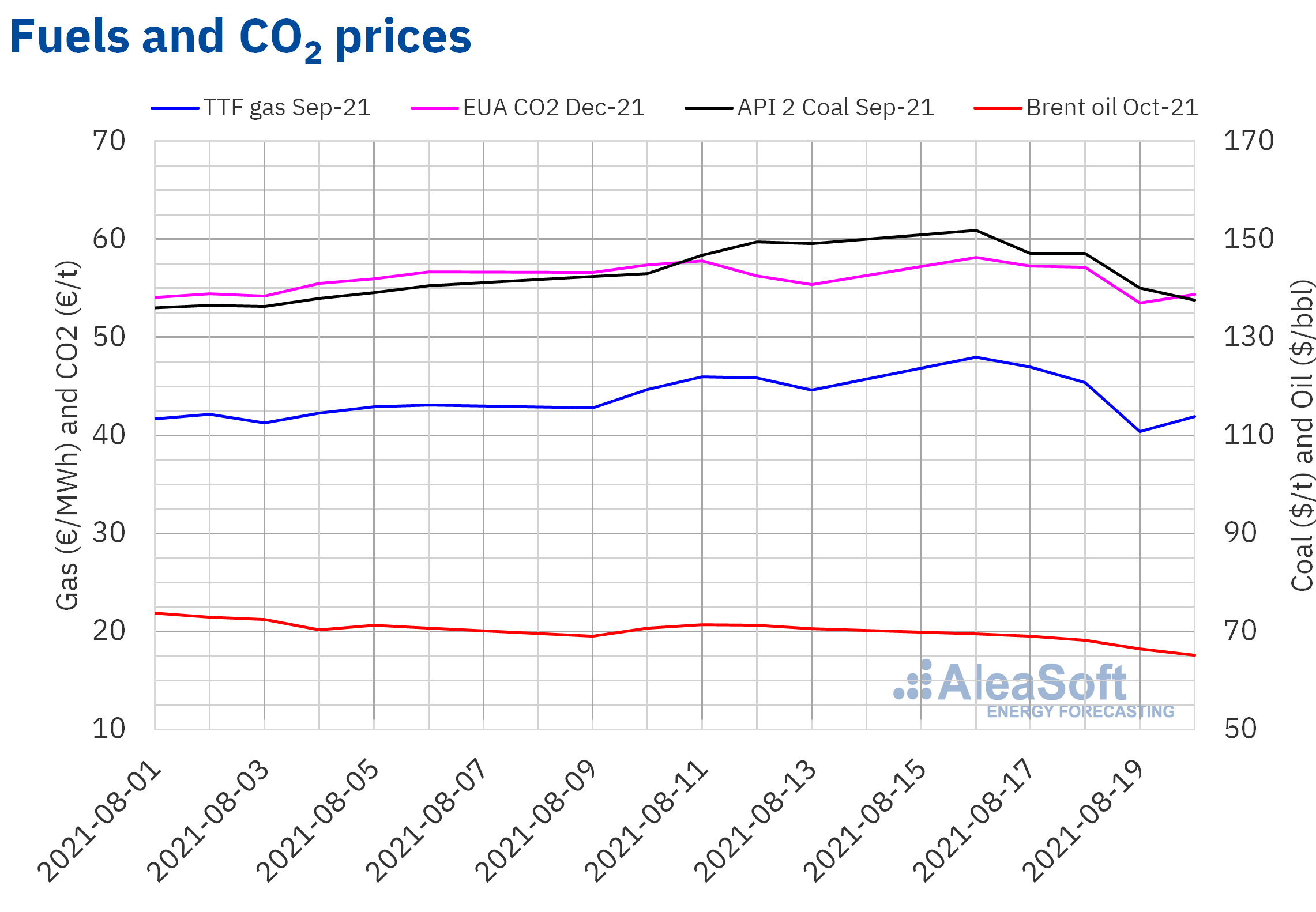 The renewable energy revolution in which Europe is currently in, may represent opportunities in markets where thermal production is still high and there is more room for the implementation of these clean technologies. AleaSoft produces long‑term price forecasting reports for most of the European electricity markets, which are an essential input for renewable energy projects financing, and of which a special promotion is currently available.

The renewable energy projects financing will be one of the topics that will be addressed in the next AleaSoft webinar that will be held on October 7 with the participation of invited speakers from Deloitte. In addition, the evolution of the energy markets and the importance of forecasts in audits and in the portfolio valuation will be analysed.