AleaSoft, August 16, 2021. The price increases in the spot and futures electricity markets continued in the second week of August, again driven by gas and CO2 prices, which are at historical highs. There was a general decline in wind energy production that also favoured increases and demand increased in several markets. The Iberian market registered records almost every day and the markets of Italy and the Netherlands reached the highest daily price in at least the last six years.

Solar energy production increased during the week of August 9 in most European markets compared to the previous seven days. The markets of France and Germany saw the largest increases, 33% and 29% respectively, at the same time that Italy registered an increase of 3.3%. In Spain there was a 19% decrease and in Portugal there was a slight 0.1% drop.

Declines in solar energy generation are expected in the week of August 15 in Spain and Germany, according to AleaSoft’s solar production forecasts. 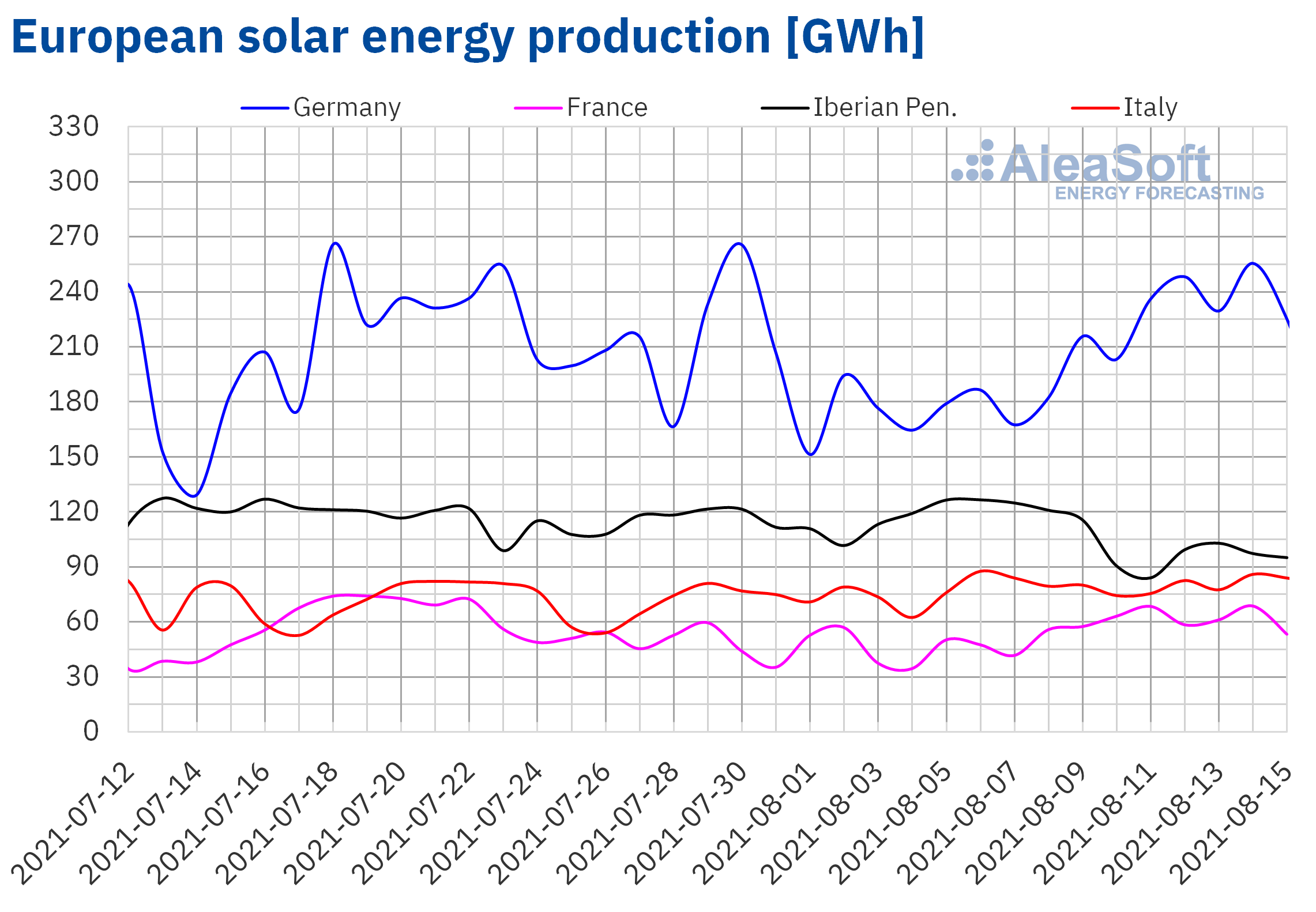 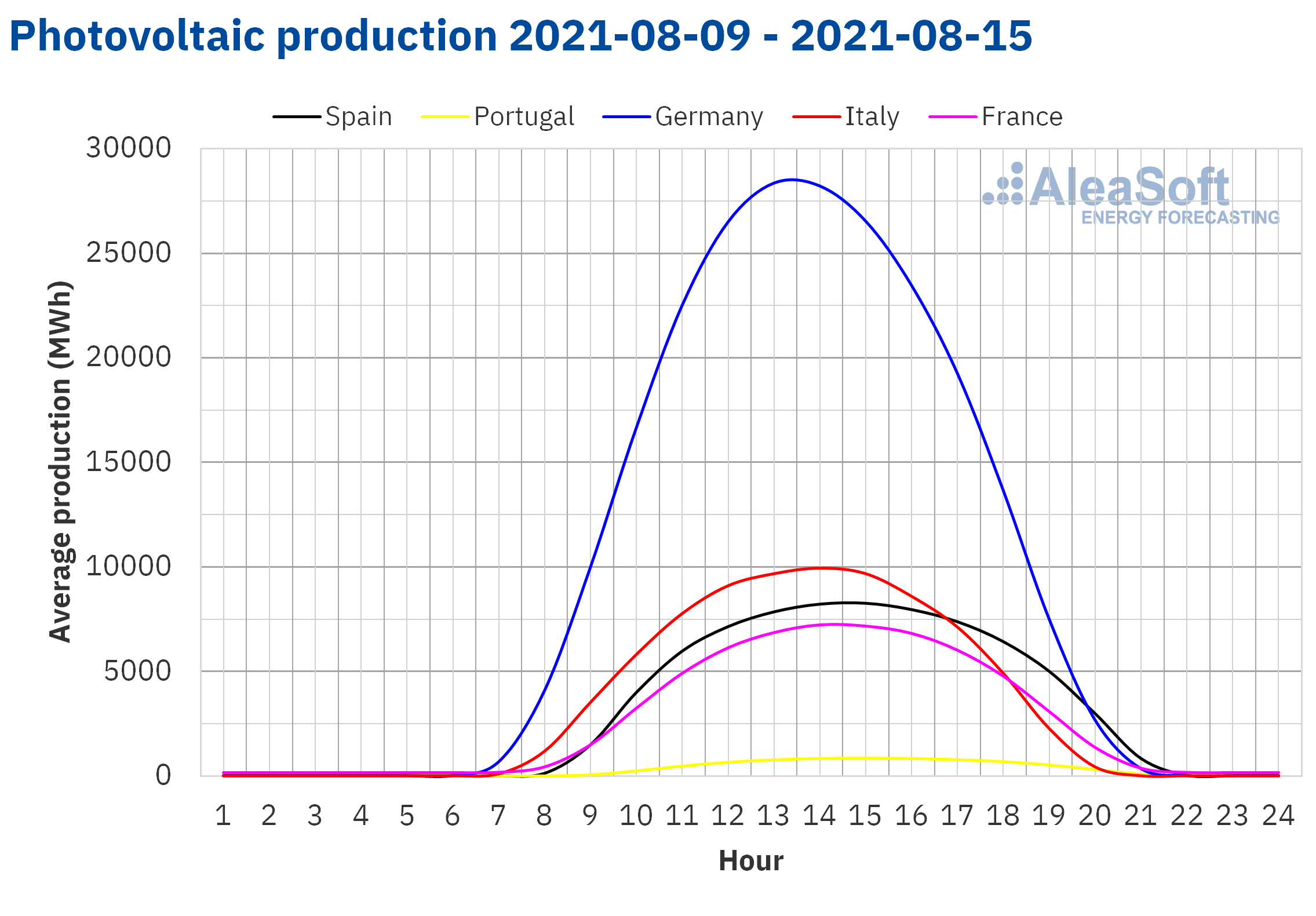 Wind energy production fell in a generalised way in the electricity markets of the European continent during the days of August 9 to 15 compared to the same period of the previous week. The most significant decreases occurred in the markets of Italy, France and Portugal where the generation with this technology fell between 49% and 58%. In Italy the drop was 25% and in Spain 19%. 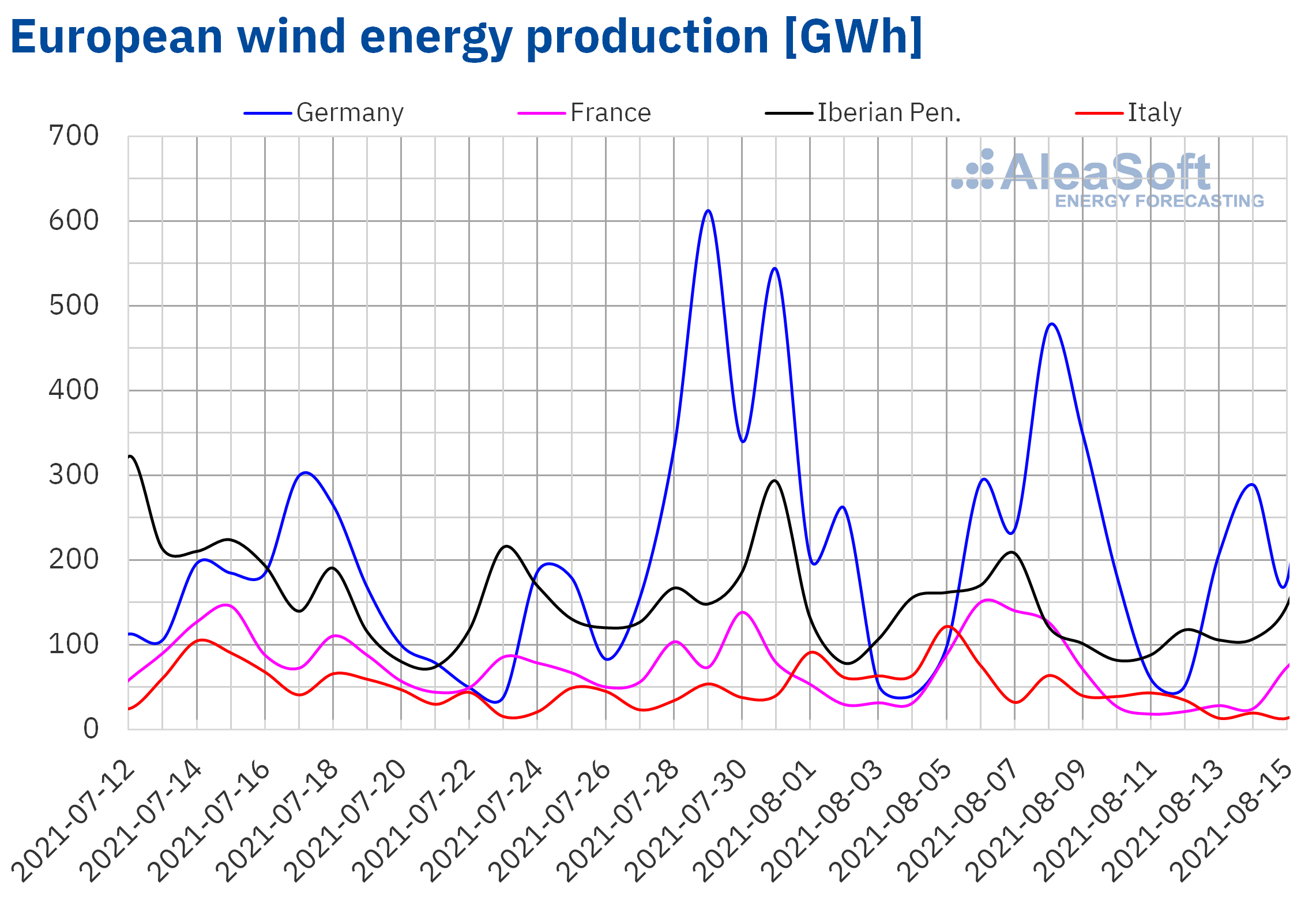 In the week of August 9, there were increases in electricity demand in most European markets compared to the previous week, as indicated in the AleaSoft report of August 9. The heat wave that hit southern Europe favoured these recoveries. This phenomenon caused by the subtropical anticyclone Lucifer triggered temperatures in Spain, where the historical maximum record was registered for an observatory of the main network of the State Meteorological Agency (AEMET), which was 47.2 °C at 17:10 on Saturday August 14 in the municipality of Montoro, Andalusia, above the previous record that Córdoba capital had, of 46.9 °C on July 13, 2017. These high temperatures were the main causes of the increase in demand in a 4.1% in the Spanish market. In the absence of confirmation by the World Meteorological Organization, on Thursday, August 12, the European maximum temperature record of 48.8 °C was recorded in Sicily, Italy, exceeding the 48.0 °C that was recorded in Athens, Greece, the July 10, 1977. However, work activity continued to decline in these days close to the national holiday of Ferragosto celebrated on Sunday, August 15. As a consequence of this drop, demand in Italy fell by 5.9%.

On the other hand, the increase in temperatures was the most influential factor in the increases in demand in the markets of Great Britain, France and Belgium, which were between 1.0% and 4.0%. As for the rest of the markets, in Germany and Portugal there were falls of less than 1.0%.

AleaSoft‘s electricity demand forecasting suggests that it will fall in the markets of the Iberian Peninsula and France, along with the drop in temperatures in most of the European markets. 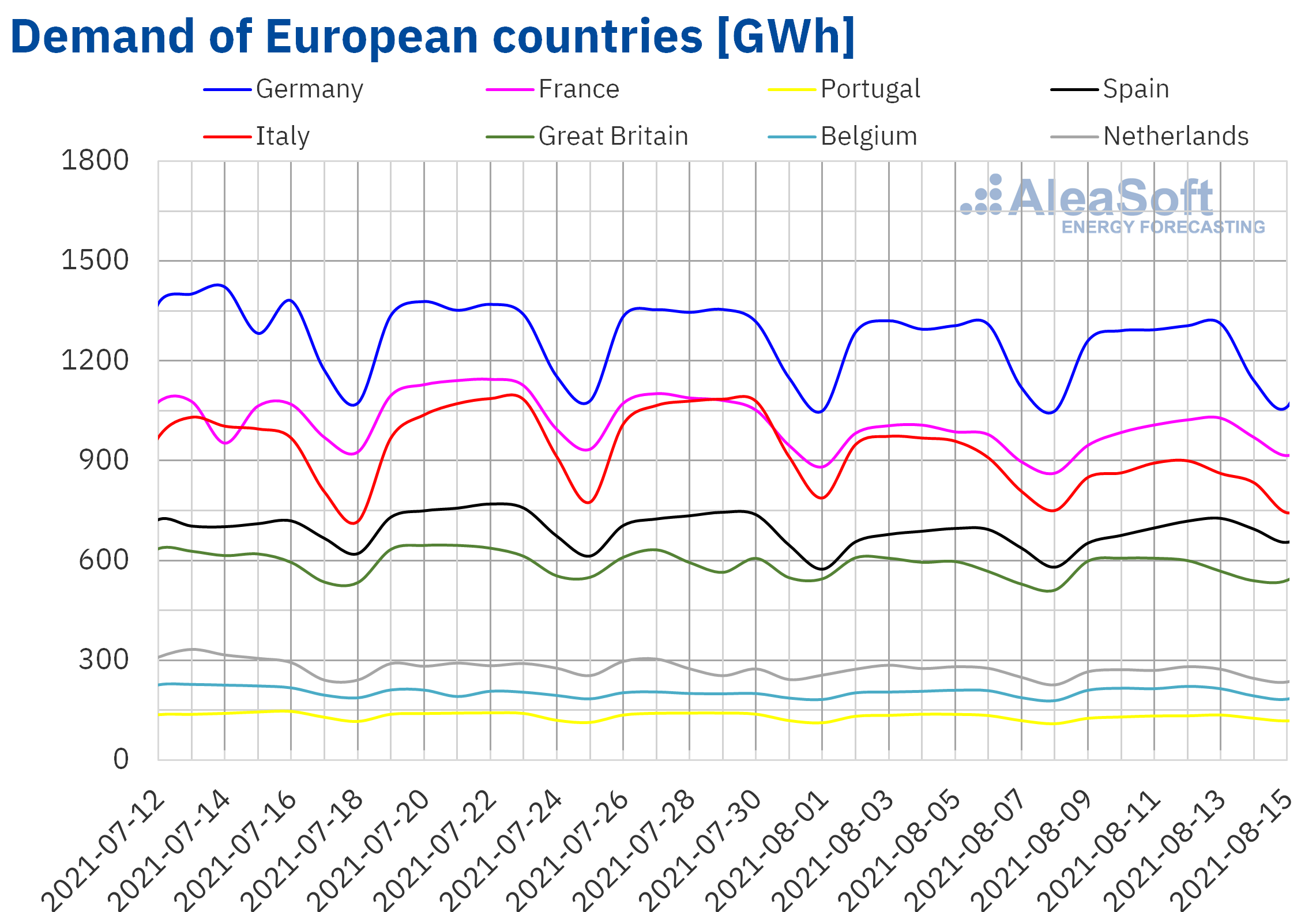 During the week of August 9, the average prices of the European electricity markets analysed at AleaSoft rose compared to the previous week. The largest increase was registered in the EPEX SPOT market of France, which was 39%, followed by the increase of the EPEX SPOT market of Belgium, of 33%. The market where prices rose the least was the UK N2EX market, with an increase of 2.8%. In the rest of the markets, prices increased between 9.1% in the IPEX market of Italy and 22% in the Nord Pool market of the Nordic countries.

In the MIBEL market of Spain and Portugal, the week of August 9, 2021 was historic. During the five working days of the week, the daily average price record in the entire history of the market was broken consecutively in each of them. Finally, the current record was set on Friday, August 13, at €117.29/MWh. The two days of the weekend also represented records. With prices of €114.63/MWh and €110.02/MWh, Saturday 14 and Sunday 15 August respectively were the Saturday and Sunday with the highest price in the history of the MIBEL market.

Although the market with the most relevant records was the Iberian, other markets in Europe also set highs in recent years in the week of August 9. The Italian IPEX market registered a price of €124.55/MWh on Friday, August 13, which is the highest price in the last six years in that market. On the other hand, the EPEX SPOT market of the Netherlands registered a price of €106.56/MWh on Thursday 12, its maximum in at least the last decade.

The fundamental causes of the increase in prices in the electricity markets continue to be the high prices of gas and CO2, to which was added the heat wave that affected southern Europe, which increased demand in some countries, and the decline widespread of wind energy production. 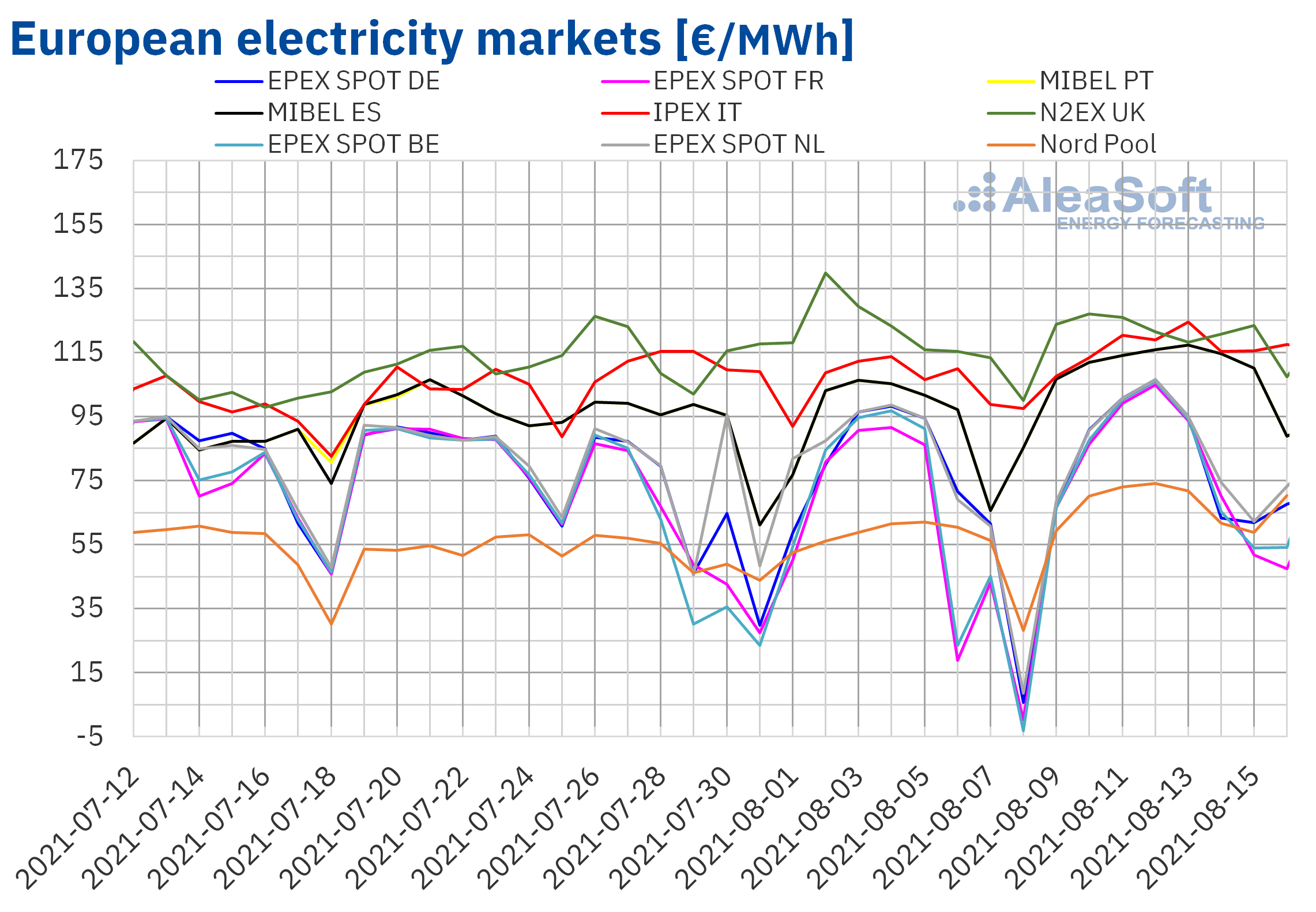 For the week of August 16, according to AleaSoft‘s prices forecasting, prices are expected to decrease fundamentally in the French and Iberian markets, although the Belgian market should also register decreases. In the rest of the markets, the variations with respect to the week of August 9 will be less noticeable and in some cases increases may be seen.

The prices of electricity futures for the next quarter once again registered a general increase in all the markets analysed in AleaSoft. The largest percentage increase was 9.5% and was recorded in the NASDAQ market of the Nordic countries. The increases in the EEX market of Spain and the OMIP market of Spain and Portugal, as well as in the ICE market of the Nordic countries, were also notable, which were higher than 7.1%. In the rest of the markets the increases were between 1.6% and 4.9%.

On August 9, the Brent oil futures for the month of October 2021 in the ICE market registered a settlement price of $69.04/bbl. This price was 5.3% lower than that of the previous Monday. In general, during the rest of the week, prices recovered although they ended up closing at $70.59/bbl in the session on Friday, August 13, which is a figure 0.2% lower than that of Friday, August 6.

As had already happened, these drops in the price of oil are mainly due to concerns about the implementation of movement restrictions due to the spread of the delta variant of the coronavirus, mainly in China, which is one of the main consumers and the largest importer.

Regarding the TTF gas futures in the ICE market for the month of September 2021, on Monday, August 9, they reached a settlement price of €42.79/MWh. This price was 1.5% higher than the previous Monday. In the sessions on Tuesday and Wednesday, prices continued to rise, and then fell on Thursday and Friday, finally settling on August 13 at €44.63/MWh. The maximum value of the week, reached on Wednesday, August 11, was €45.99/MWh and constitutes the new highest price record registered in the negotiation of the future of the following month at least since October 2013.

The drop in gas prices on Thursday and Friday may be related to the closing of positions of market participants. However, the market trend is still considered bullish because the supply is still not enough to cover the demand.

Regarding the CO2 emission rights futures prices in the EEX market for the reference contract of December 2021, on Monday, August 9, they reached a closing price of €56.62/t. This price was 4.0% higher than the previous Monday. In the two subsequent sessions, prices continued to rise, reaching only €0.10/t below the maximum of July 5 on Wednesday. From there, they began to fall and on Friday, August 13, the settlement price of the last session of the week was €55.38/t.

API 2 coal prices for September 2021 stood at $142.45/t on Monday, August 9, a price that represents an increase of 4.4% compared to Monday, August 2. The next days of the week prices continued to rise and reached their maximum on Thursday 12 with a price of $149.45/t, which represents the highest price record for the following month since October 2008. 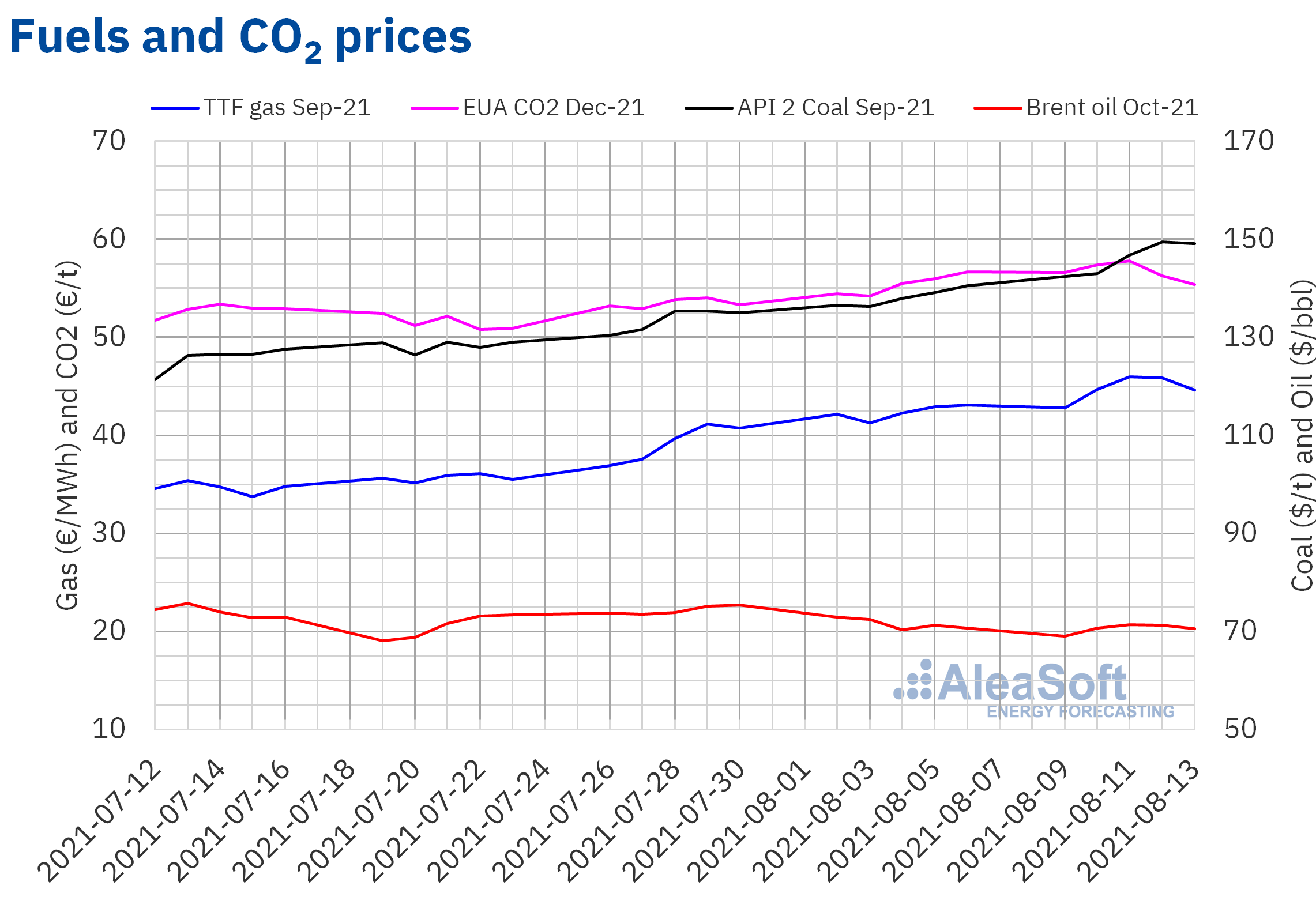 AleaSoft is carrying out a special promotion of the price forecasts of the European electricity markets in the short and medium term. These forecasts are a necessary reference when preparing the purchase and sale offers in the spot and electricity futures markets, especially in the current context of high prices in the energy markets.

On October 7, two Deloitte speakers, Pablo Castillo Lekuona, Senior Manager of Global IFRS & Offerings Services and Carlos Milans del Bosch, Partner of Financial Advisory, will again accompany Oriol Saltó i Bauzà, Manager of Data Analysis and Modelling at AleaSoft, in the webinar that will be held just one year after the one held with the same speakers in October 2020 and which will be moderated by Antonio Delgado Rigal, CEO of AleaSoft. Among the topics to be analysed will be the evolution of the energy markets in the period between the two webinars and the prospects in the medium and long term, the renewable energy projects financing and the importance of forecasts in audits and in the portfolio valuation.