AleaSoft, December 30, 2019. The week of December 23 begun with increased solar production in the European markets, with the exception of Germany. Meanwhile, wind energy production declined widely. The Christmas holidays caused the decline in demand and in market prices. This week, lower wind and solar energy production is expected for most markets, so higher prices are also expected.

Last week there were increases in the solar energy production of much of the European markets, compared to the week of December 16. In Portugal, Spain and Italy, production values higher than double the previous week were reached, registering increases of 182%, 132% and 112% respectively. In France, the generation from this renewable source increased by 41%, with Germany being the only market where production decreased, by 10%.

With only two days left in December, solar energy production this month has been greater in most markets compared to the same period of 2018. In Germany the increase has been 68% and in the Iberian Peninsula 10%. However, in Italy despite the large weekly increase, it decreased by 8.8%.

For this week, at AleaSoft, drops in solar energy production are expected in Spain and Italy, and increases in Germany. 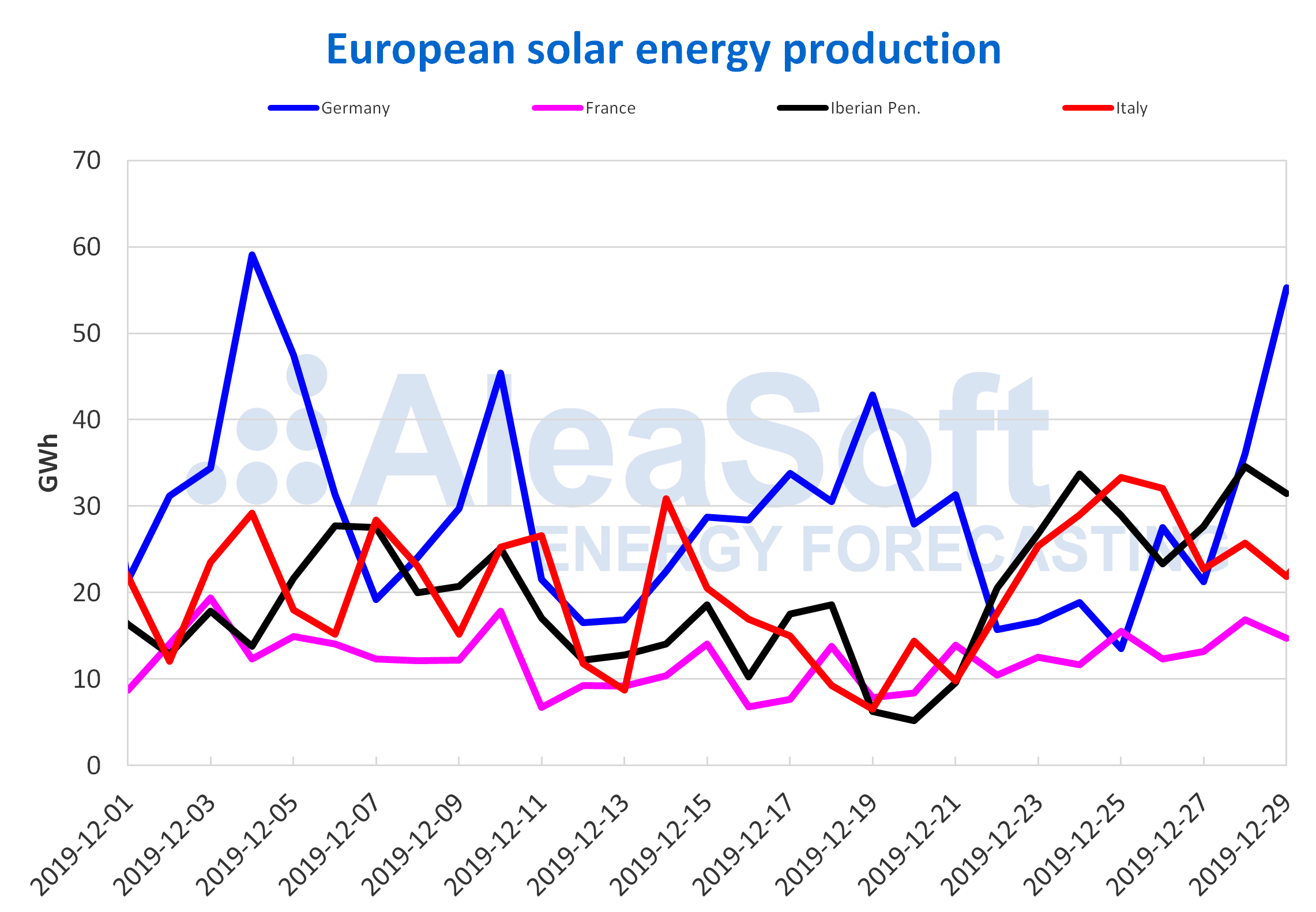 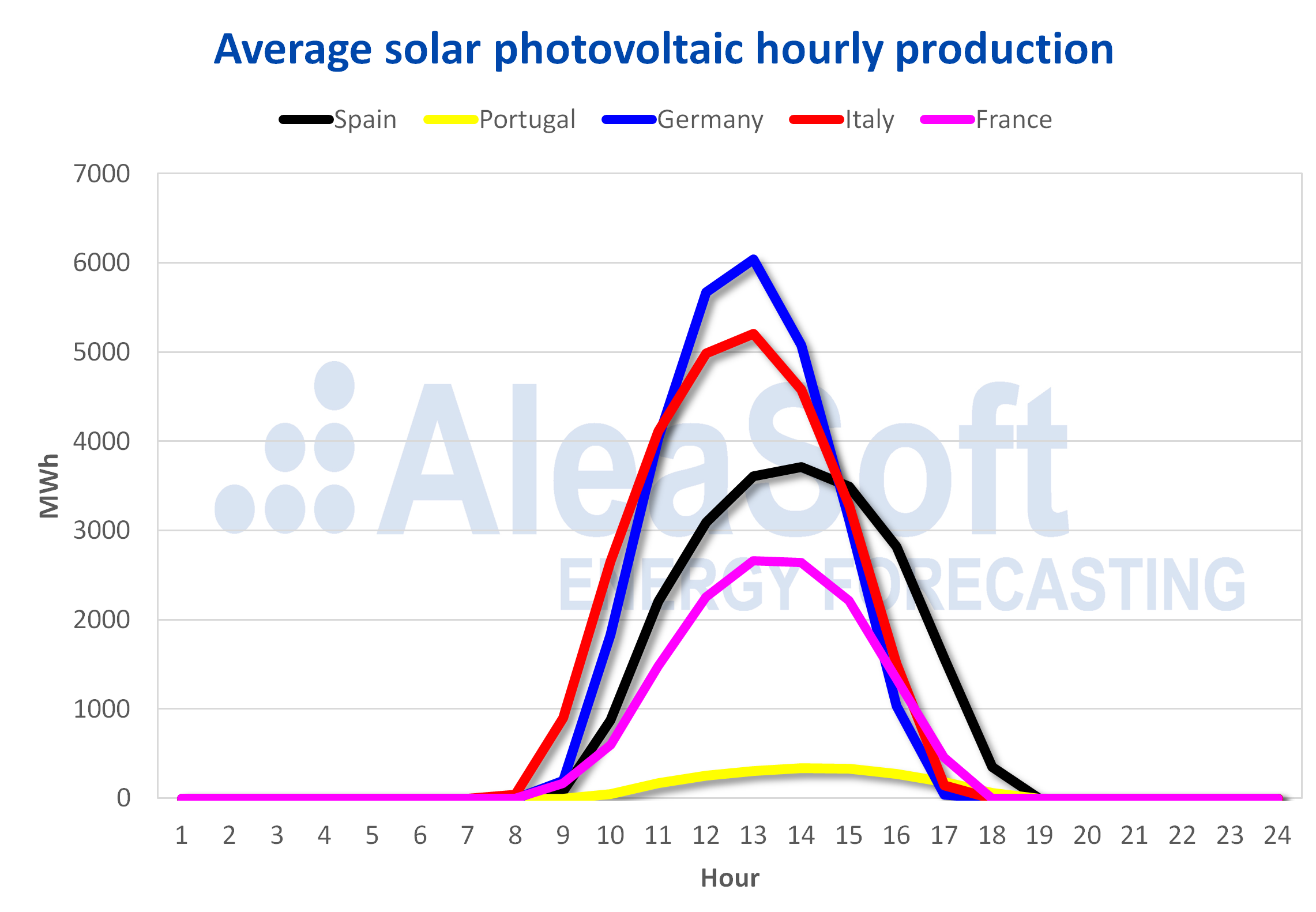 In the case of the wind energy production, there was a general decline last week in European markets. The smallest variation was in Italy, where there was 18% less than the previous week. Germany and France had declines very close to 36%, while the biggest declines have been in the Iberian Peninsula, where production fell by 61% in Portugal and 57% in Spain.

In the year‑on‑year analysis of the elapsed days in December, the wind energy production has been higher than in 2018 in all markets. Even a general balance has been achieved between the variations of renewable energies compared to December 2018. That is, the increases in wind energy complemented those of solar energy production, being higher in markets with lower solar production, and more moderate in those with greater solar. Such is the case, where in Germany it has only grown by 3.2% while in Italy the registered increase has been 38%.

At AleaSoft it is expected that during this week the decline in wind production will prevail in European markets, except in Germany where an increase is expected. 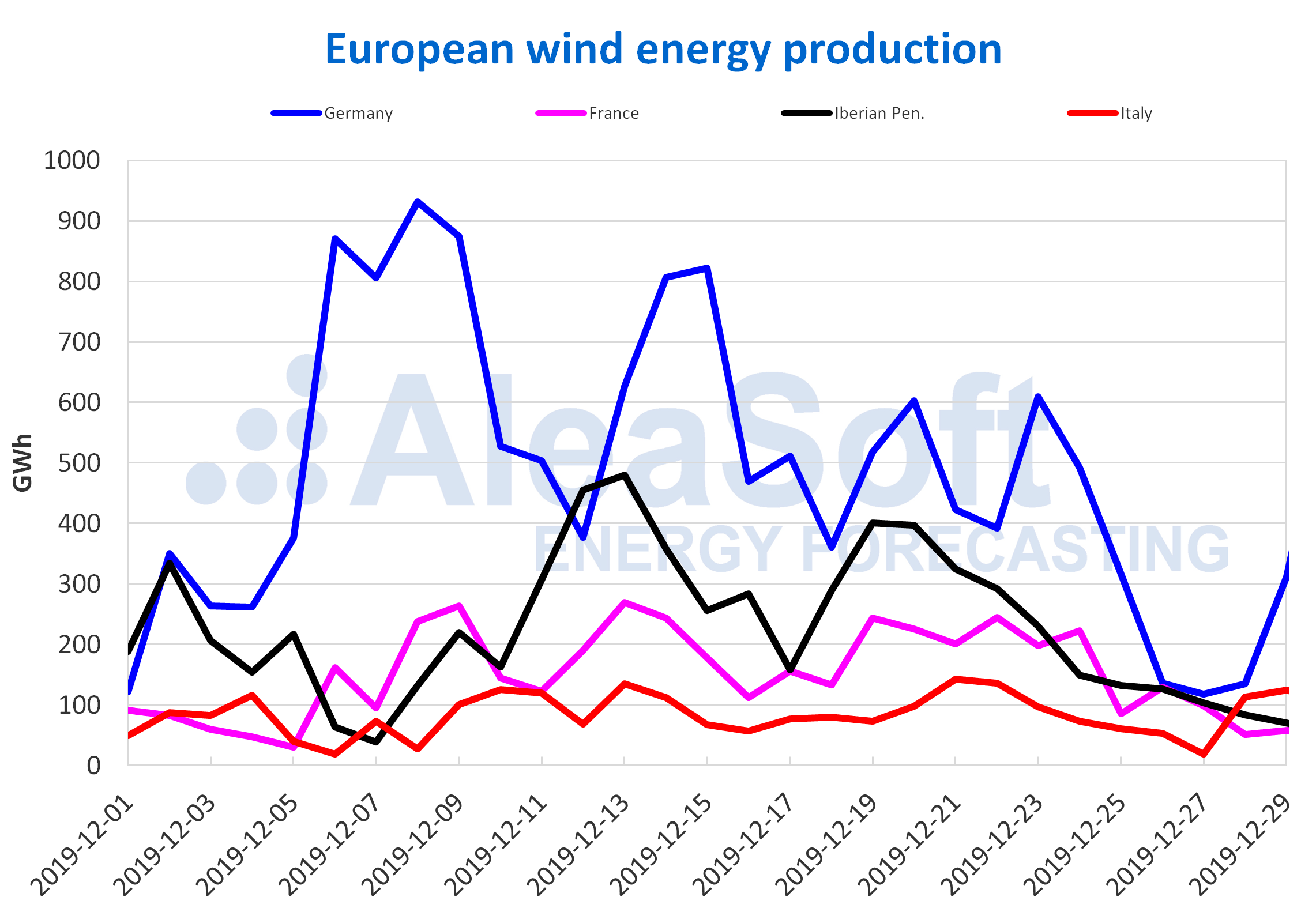 As expected, in the week just concluded the electricity demand was well below that obtained in the previous week in all markets of the European continent. The labour effect of the holidays of December 25 and 26 caused declines of 19% and 17% in Germany and Italy, respectively. The average temperatures were, in general, at least 1 °C lower than those of the previous week, but they had less influence than the labour effect. In Portugal, as in Spain, the decrease was 16%. By correcting the labour effect in Germany, France and Spain, increases are obtained with respect to the week of December 16 of 5.7%, 2.4% and 0.2% respectively.

During this week, where we go deeper into the winter days, the average temperatures will continue to decrease and consequently the electricity demand will increase. 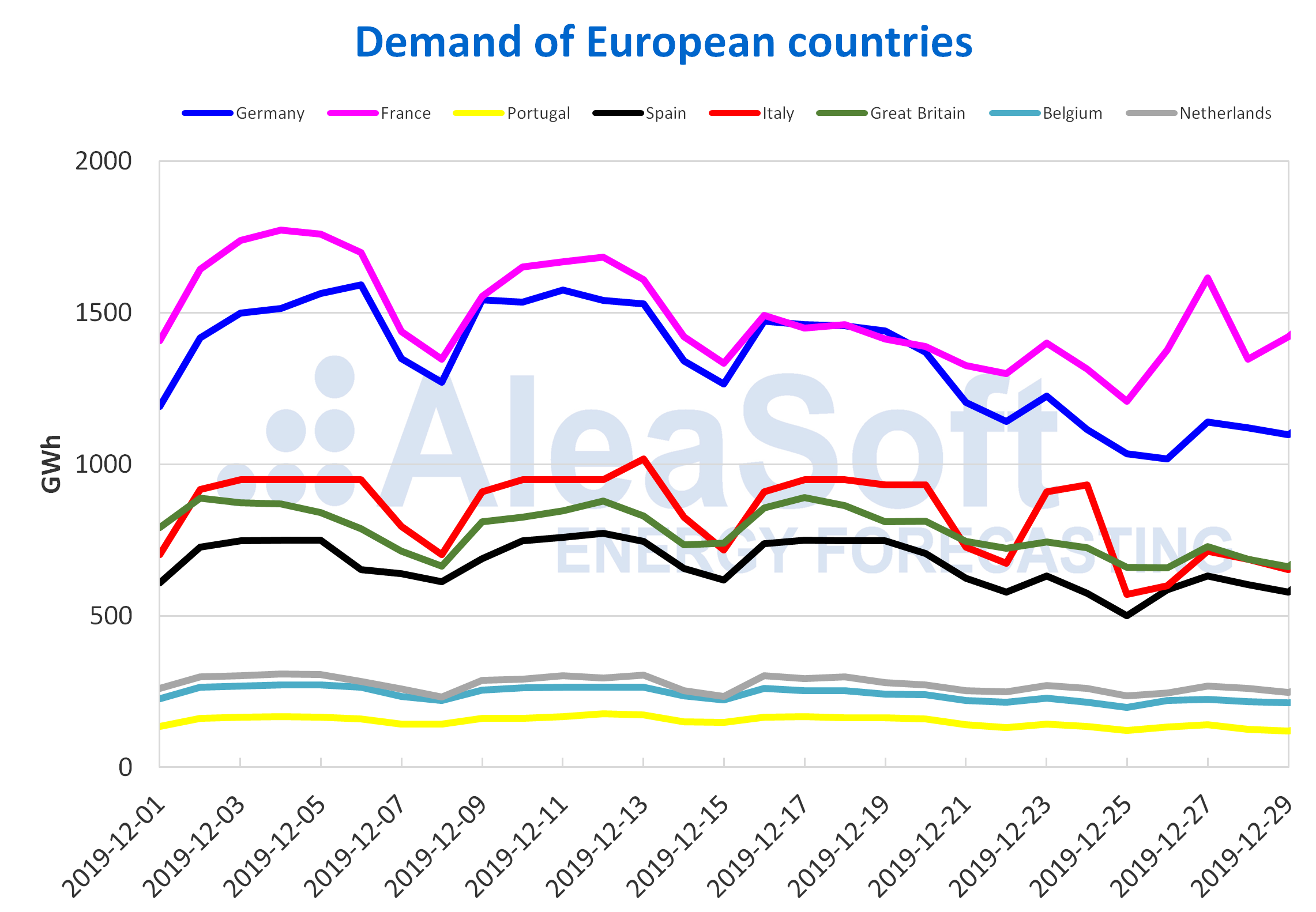 The prices of most of the electricity markets in Europe continued to fall during the last week of December 23, where the labour effect of Christmas festivities caused the decline in electricity demand despite colder temperatures. The biggest drop was in the IPEX market of Italy, by 22%, while the smallest variation was 5.4% in the Nord Pool market of the Nordic countries. The rest of the markets fell between 7.6% in the EPEX SPOT market of Belgium and 16% in the EPEX SPOT market of France. The exception has been the MIBEL market of Spain and Portugal, where prices have increased by 7.9% and 10% respectively, after the fall in prices in the week of December 16 due to the high wind energy production registered during that week. However, despite the increase in the MIBEL market, this was the lowest average price of the week of €25.66/MWh.

On the other hand, the N2EX market in Great Britain with a weekly average of €41.22/MWh, was the one with the highest price throughout the past week. Followed in second and third place by the Nord Pool market of the Nordic countries and EPEX SPOT market of the Netherlands, with average prices of €35.51/MWh and €33.31/MWh, respectively. The rest of the markets remained with prices between €26.03/MWh of the EPEX SPOT market of France and €32.09/MWh of the Italian IPEX market.

For this Monday, December 30, the EPEX SPOT market of Germany was the one with the lowest price, with a daily average of €25.57/MWh, where a higher wind energy production and a warmer temperature are expected. While the British market, with an average of €41.69/MWh for this day, continues to be the one with the highest price. The rest of the markets settled with prices between €30.95/MWh in the Nordic countries market and €37.29/MWh in the Netherlands market. 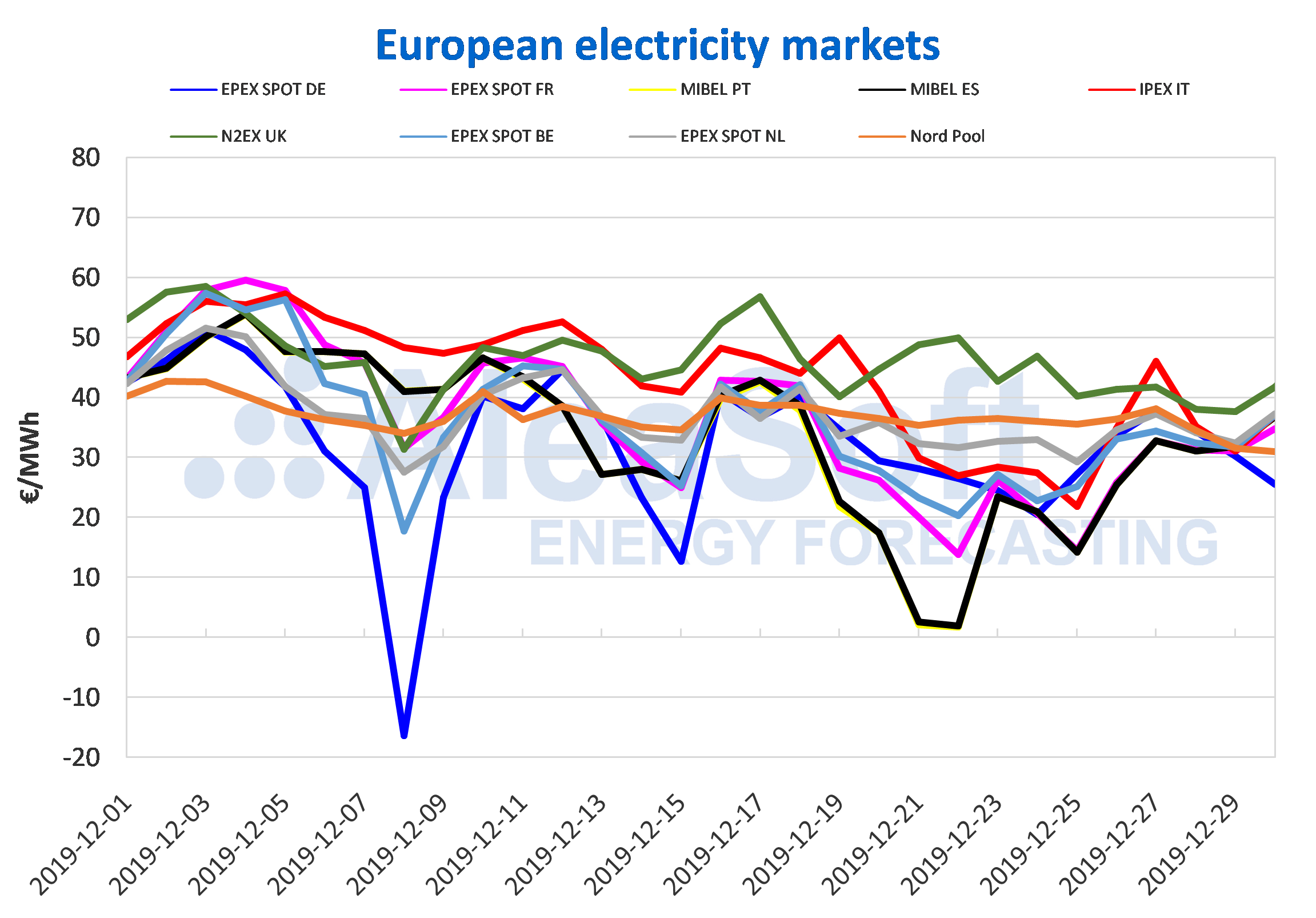 This week, prices are expected to increase in most European markets due to a general decrease in temperatures that will cause an increase in demand, compared to a low wind energy production.

The last Friday of 2019 settled with generalised decline in the European electricity futures markets analysed by AleaSoft. The product of the first quarter of 2020 registered declines of between 1.5% and 8.5% compared to the previous Friday, December 20. The OMIP market of Spain and Portugal registered the lowest variation. The rest of the markets have presented declines of more than 4.0% that reach up to 8.5% of the ICE market of the Nordic countries. The average decline in all markets was of a 5.0%.

On the other hand, the product of the 2020 calendar year also registered declines in the analysed markets, in this case in a smaller amount. OMIP is still the most conservative market with decreases of 0.1%. Meanwhile, Britain’s EEX market positioned itself as the one with the greatest variation, of a 6.8% decline compared to the settlement price of Friday 20. In general, the average drop for this product is around 3.4%.

The Brent oil futures prices for the month of February 2020 in the ICE market stood up for the past week and settled on Friday, December 27 at $68.16/bbl, the highest settlement price since May. This increase in prices is maintained because tensions between the United States and China continue to ease, with a new agreement that suspended the tariffs planned for early 2020 by both countries, an effect that adds to the early year cuts of OPEC+.

The prices of TTF gas futures in the ICE market for the month of January 2020 continued downward and settled on Tuesday, December 24 and Thursday, December 26 at €12.61/MWh, 16% lower than last Thursday.

TTF gas prices in the spot market last week fell from €12.71/MWh on Monday, December 23 to €10.91/MWh on Wednesday, December 25. In the following days, until Friday, December 27, they remained stable with an average increase of 0.4%. After the slight increases last week, this weekend the price increased by 9.4%. For this Monday, December 30, the index price is €12.13/MWh, 0.4% higher than at the weekend.

The API 2 coal futures prices in the ICE market for the month of January 2020 continue their downward trend, despite settling above $54.00/t last Friday, December 27. The prices of these futures settled the week of December 23 at $53.55/t and remained until December 26 below this value. The downward pressure on gas prices continues to influence this product, which should maintain that trend during this week.

The CO2 emission rights futures prices in the EEX market for the December 2020 reference contract remained stable during the past week above €26.50/t, after the increase recorded during the week from December 16. Prices are expected to remain stable during this week of Monday, December 30, although the evolution of Britain’s exit from the European Union must be observed, as surplus contracts could put downward pressure. 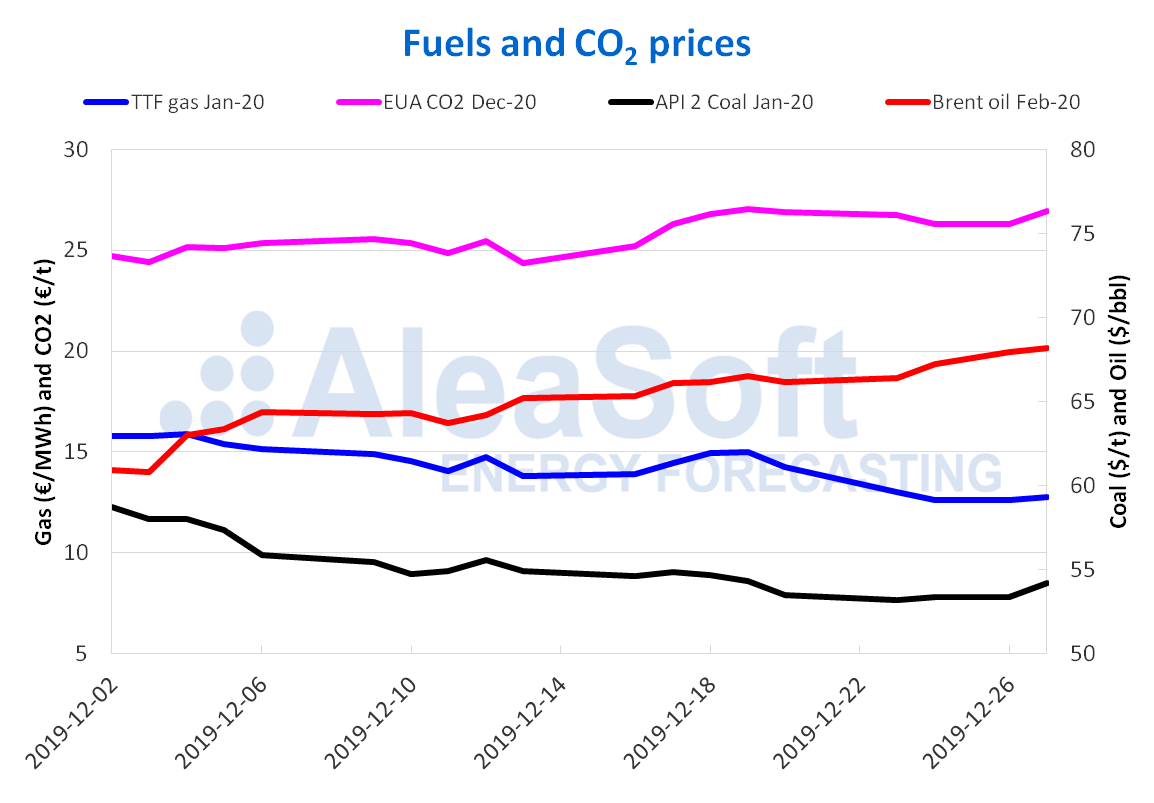 PrevAnteriorInterview of Energética XXI with AleaSoft in its 20 years of founded
Siguiente2019: Good year for the European renewable energy production that favoured the decrease in pricesNext
Facebook-f Twitter Linkedin Instagram