AleaSoft, December 19, 2019. Both solar photovoltaic and wind energy production continued to decline this week in virtually all European markets. On the other hand, the temperatures increased, which favoured the decrease in electricity demand. In the next few days, the average price will continue lower than that of last week, due to a recovery of the renewable energy production and higher temperatures over the weekend.

The average solar energy production from Monday to Wednesday of this week decreased in almost all European markets, compared to last week’s average. The only recovery so far was in Germany, with an increase of 19%. The 31% decrease in production with this technology in Italy was the most pronounced. In France and Spain the variations were ‑17% and ‑12% respectively.

On the elapsed days in December, the generation with the solar technology was superior to that of the same period in 2018 in most markets, mainly in Germany where it increased by 70%, and in France and Portugal there were increases of 15% and 4.7% respectively. On the other hand, in Spain and Italy there were decreases of 5.5% in the first and 12% in the second. 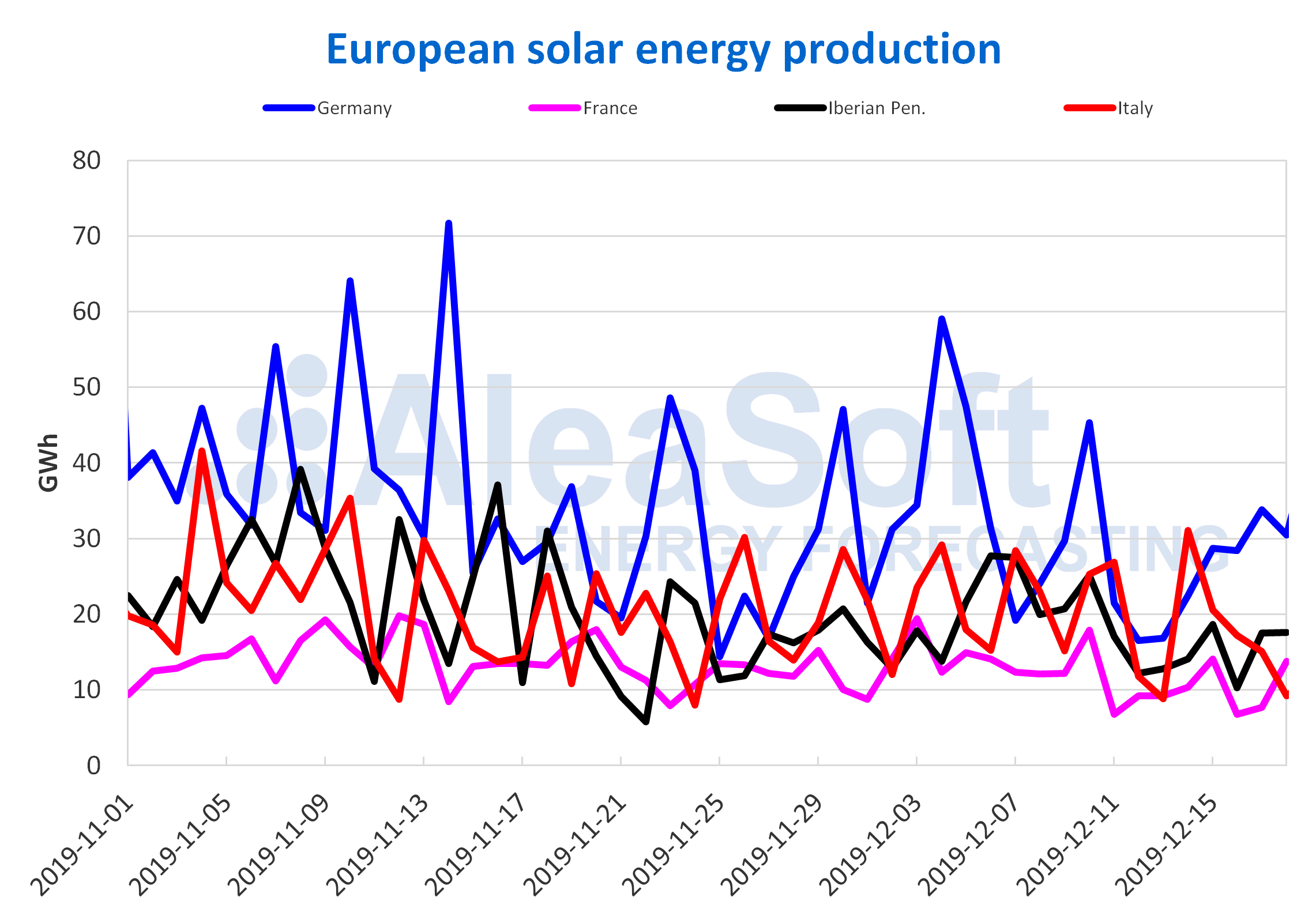 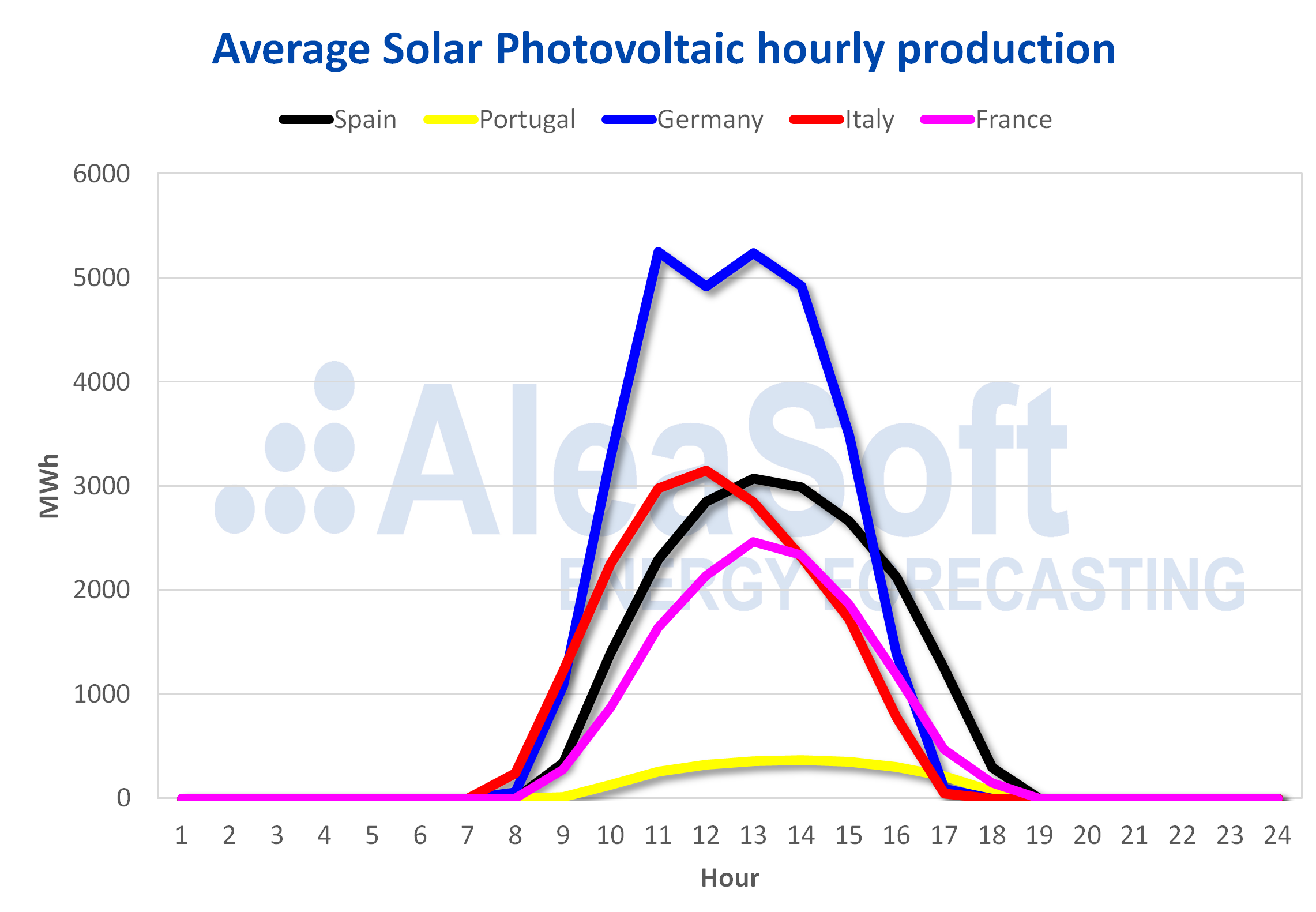 The average wind energy production in the first three days of this week was below the average of last week in all European markets. The greatest variation was ‑35% in Italy. In Germany, it fell by 31%, but it remained with the greatest variation in absolute terms because it has more installed capacity than the rest. The average values of Portugal were similar to those of the week of December 9 and only dropped by 0.1%.

However, when the wind energy production of the first 18 days of December is compared year‑on‑year, the behaviour was different, with increases in all markets. The most notable variations were registered in Portugal and Italy, of 37% in both cases. In the rest of the markets the increases were between 12% of Germany and 16% of France. 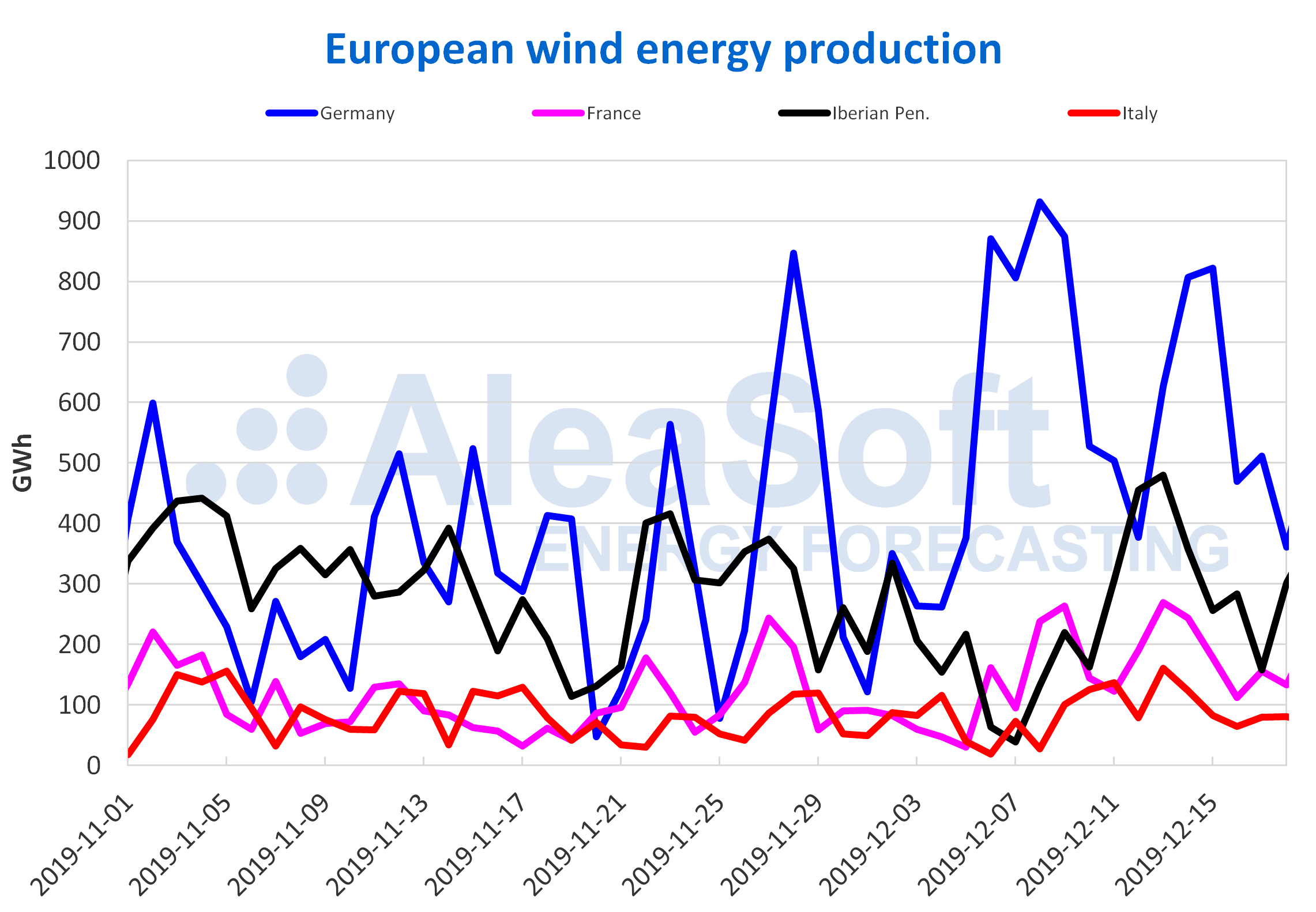 As for the electricity demand, from December 16 to 18, it decreased in a large part of the European continent compared to the same period of the previous week, mainly due to the increase in average temperatures. The rise of 3.9 °C in France led to a decrease in demand by 9.7%. In Germany, the drop was 5.7%, caused by the average increase in temperatures of 3.1 °C. In Italy and Portugal the variations were less than 1%. On the other hand, in Great Britain, which was the only country where the average temperature decreased, the demand rose by 5.1%. 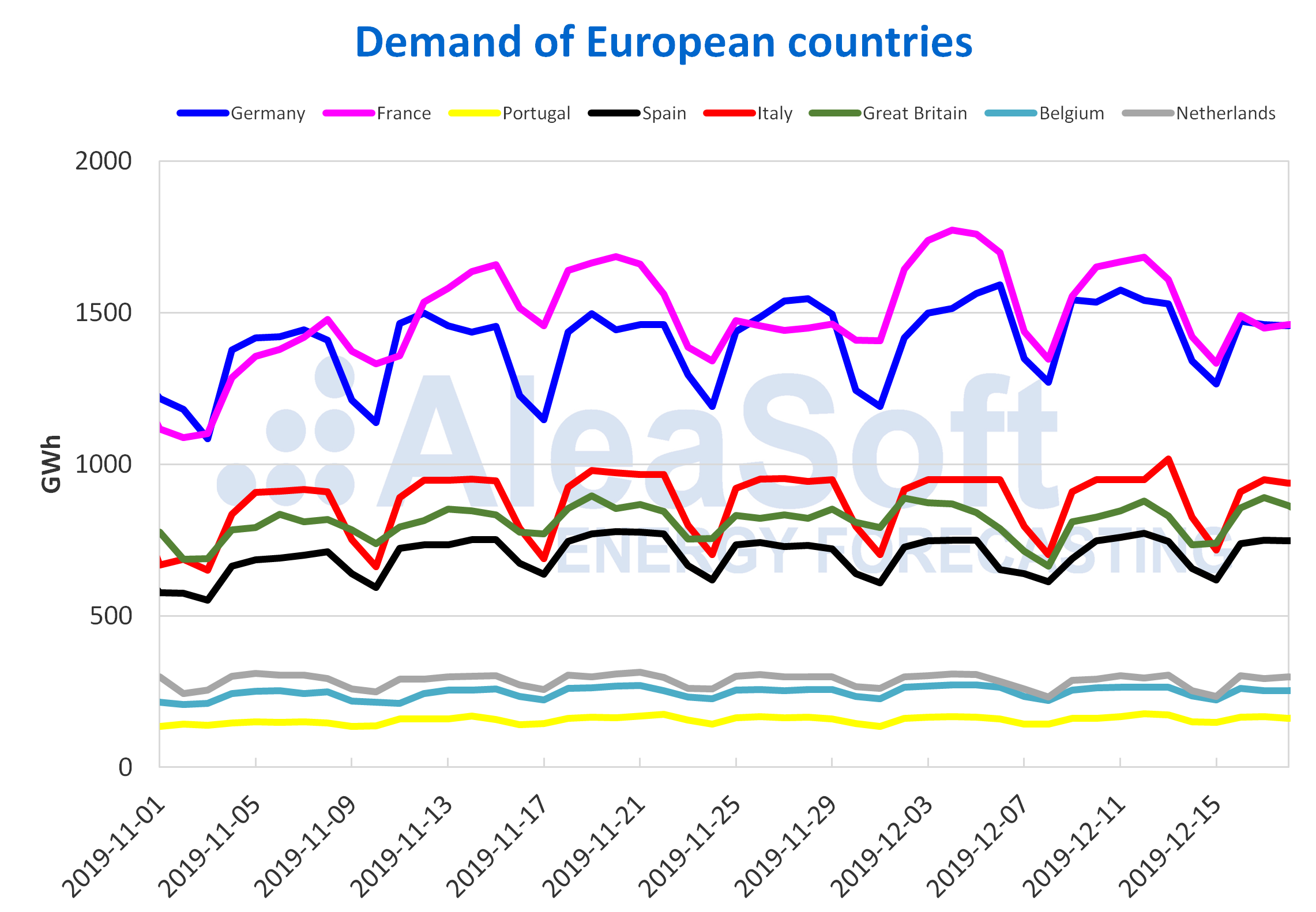 For the wind technology, the difference of the first three days of this week with respect to the average values of the previous one was also negative, decreasing by 28%. However, when analysing the first 18 days of December in year‑on‑year terms, in Spain, an increase of 14% in wind energy production was achieved. For next week, a setback in the generation with this renewable source is expected.

The electricity demand increased by 1.9% in Mainland Spain from Monday to Wednesday of this week, influenced mainly by the rise in the average temperature of 0.36 °C and by the effect of the holiday of December 9, in some autonomous communities. When correcting the effect of the holiday, the variation in demand obtained is ‑0.3%, as expected because of the increase in temperature.

After completing its 23rd refuelling, the Vandellós II nuclear power plant is in an available state and is expected to connect to the grid again in few days. So far this week, the nuclear energy production remained similar to that of last week, with the stability that characterises these power plants. 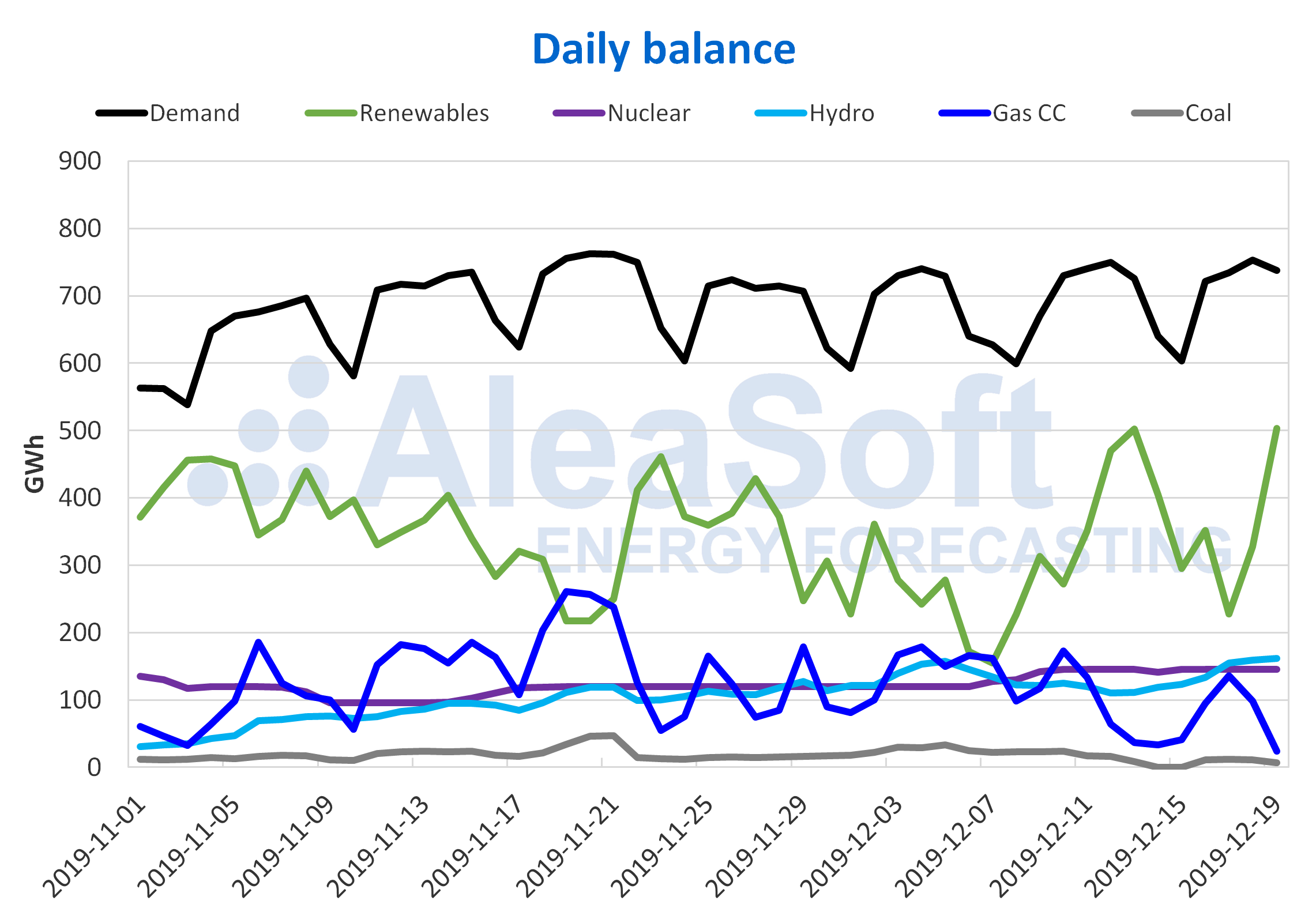 The hydroelectric reserves increased by 2.2% compared to the previous week. Currently they store 10 449 GWh, which represents the 45% of their total capacity, according to data from the latest Hydrological Bulletin of the Ministry for Ecological Transition.

So far this week, the European electricity markets prices behaved in a heterogeneous manner, decreasing for most markets compared to the same days of the previous week. The price of the MIBEL market of Portugal and Spain, the EPEX SPOT market of France, Belgium and the Netherlands and the IPEX market of Italy registered a variation in the average price for these days between ‑16% and ‑4.3%. The Portuguese market positioned itself as the one with the lowest price with an average of €35.48/MWh. The rest of these markets were around €36/MWh and €39/MWh. On the contrary, the Nord Pool market of the Nordic countries, the EPEX SPOT market of Germany and the N2EX market of Great Britain were the ones that increased their prices by 1.9%, 4.2% and 5.3% respectively. The N2EX market with an average price of €48.99/MWh, was the highest, followed by the Italian IPEX market with €47.17/MWh.

Despite the low wind and solar energy production that took place since the beginning of this week, except in Portugal in the case of the wind energy, the prices in most markets remained lower than those of the same days last week. Not being so in the case of Germany, that despite presenting warmer temperatures and having decreased its demand, the average price of these days was higher by €1.53/MWh than that of the same days last week, when the high wind energy production observed since Friday, December 6, lowered the prices to negative values in the hours of some days. 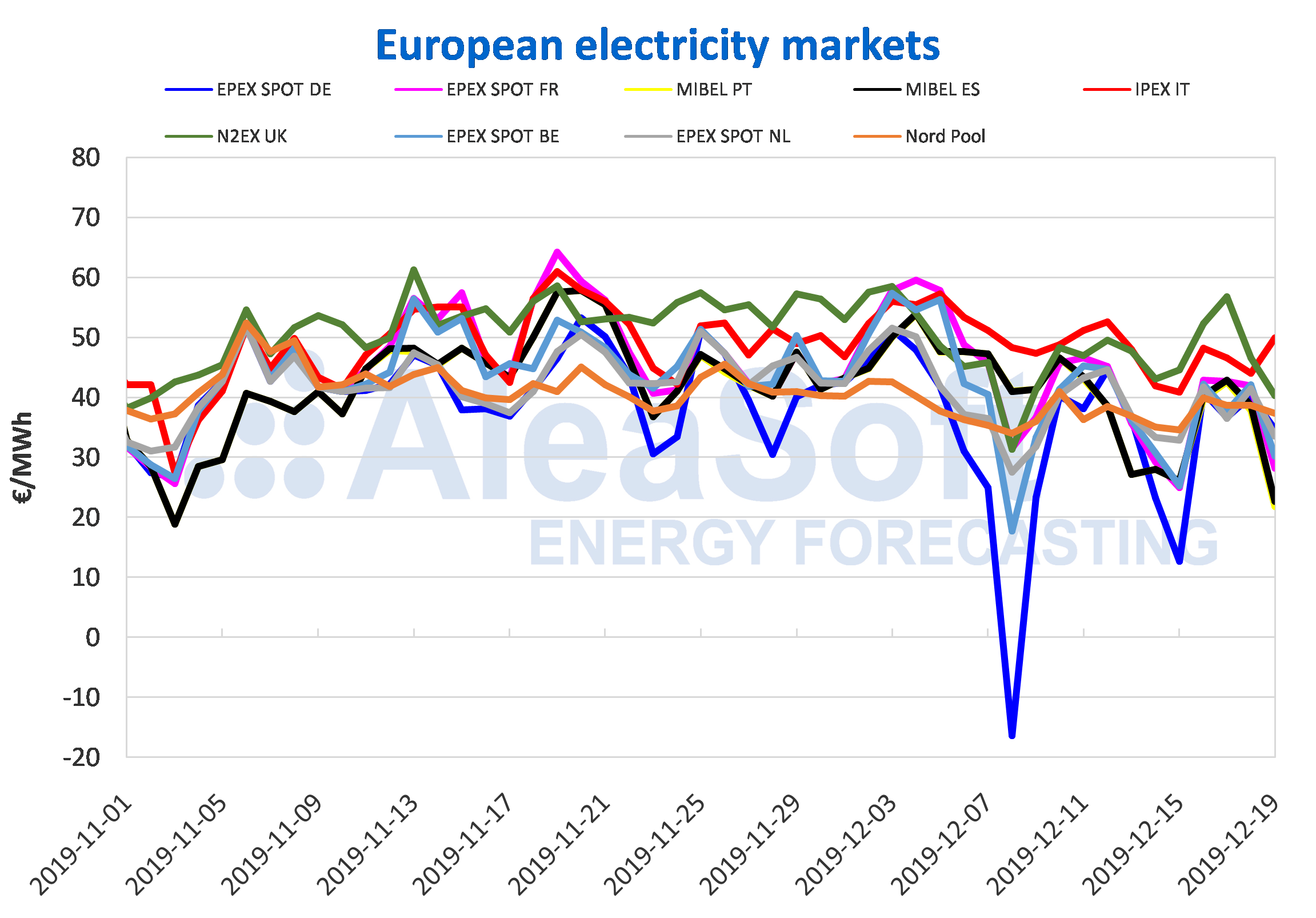 At AleaSoft it is expected that in the rest of the days of this week the prices will decrease in most European markets compared to what was observed at the beginning of this week.

In the MIBEL market, the average prices so far this week were between €36.13/MWh of the Spanish market and €35.48/MWh of the Portuguese market, this being the market with the lowest price. Due to the high wind energy production in the Portuguese market, the price decreased by 16% in this and 15% in the Spanish market between Monday and Thursday of this week compared to the same days of last week. For almost the first four days of this week, the MIBEL market of Portugal registered the lowest prices, except for Tuesday, December 17, when it settled with a daily price of €42.61/MWh, well above other markets. This Thursday, December 19, the daily prices of the MIBEL market of Spain and Portugal were €22.71/MWh and €21.81/MWh respectively, being around €16/MWh below those of the previous day and positioning as the lowest to this day, so far this year for these markets.

At AleaSoft, the prices are expected to decline during the rest of the week, backed by warmer temperatures and an increase in wind energy production in the Iberian Peninsula.

After several days with a clearly downward trend, the European electricity futures markets recovered so far this week. In the case of futures for the first quarter of 2020, between last Friday, December 13, and yesterday, December 18, all markets increased their price for this product. In the majority there are increases between 0.2% and 2.0%. However, the British futures stand out sharply. In both the EEX market and the ICE market, Great Britain increased its price by 7.6% and 6.8% respectively.

Based on the product of the 2020 calendar year, a similar behaviour is observed. Except that, in this case, the NASDAQ market price of the Nordic countries did not register changes between the analysed days, remaining at €36.15/MWh. In the rest of the markets the panorama is the same as for the product of Q1‑20. The increases in that case are around 1.0% on average with the exception of the EEX and ICE markets of Great Britain, which rose 6.5% and 6.1% respectively.

The first days of this week, the Brent oil futures prices for the month of February 2020 in the ICE market continued the upward trend that began on Friday, December 13. As a consequence, on Wednesday, December 18, the settlement price was $66.17/bbl. Values as high as this were not registered since May.

The production cuts agreed by OPEC+ at the beginning of the month could allow the prices to remain high during the second half of December. But the evolution of the US oil reserves levels will also influence the prices.

After reaching the lowest settlement price of the last two years, of €13.80/MWh, on Friday, December 13, the TTF gas futures prices in the ICE market for the month of January 2020 recovered the first days of this week increasing every day. On Wednesday, December 18, the settlement price was €14.95/MWh. This value is 6.4% higher than that of Wednesday of last week, which was €14.05/MWh.

For the TTF gas prices in the spot market, since Monday, December 16, every day a value lower than that registered for the same day of the previous week was reached. Thus, the index price reached for Thursday, December 19, was €12.73/MWh.

The API 2 coal futures prices in the ICE market for the month of January 2020 started this week continuing the downward trend of last week’s Friday. Thus, on Monday, December 16, the settlement price was $54.60/t, the lowest of the last two years. On the other hand, on Tuesday the price rose by 0.5%, to $54.85/t. This Wednesday, December 18, the price fell again to $54.70/t.

The CO2 emission rights futures prices in the EEX market for the December 2020 reference contract this week started an upward trend. On Tuesday, December 17, there was the greatest increase with an increase of 4.2% over the previous day. On Wednesday, the increase was smaller, of 2.0% compared to Tuesday. Even so, the settlement price was €26.58/t, the highest since September 20 when a price of €26.77/t was reached. This behaviour may be related to the commitments to reduce CO2 emissions acquired by the European Union last week. 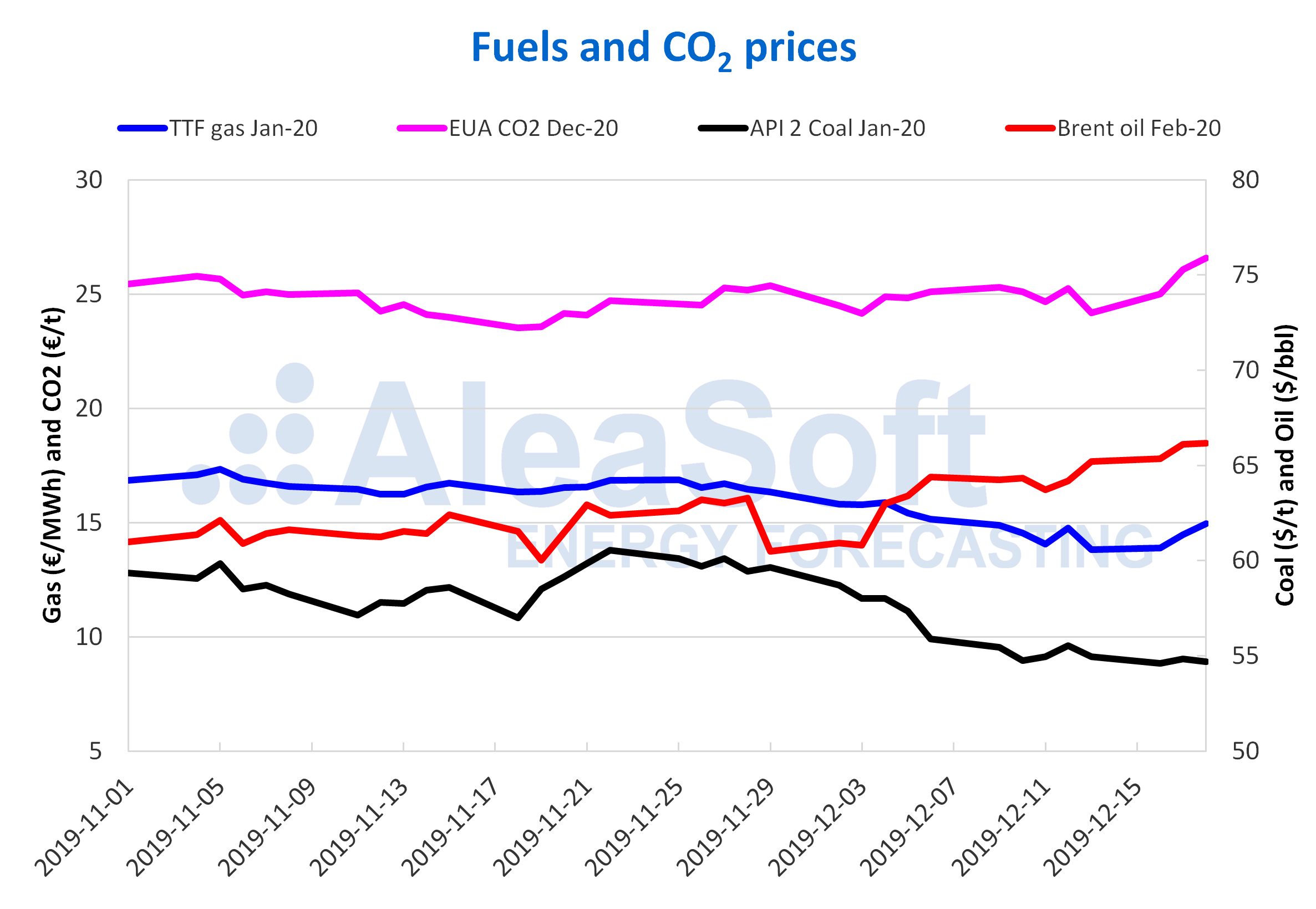