AleaSoft, November 21, 2019. The solar energy production rose this week in Spain, France and Italy and fell in Germany and Portugal. In the case of the wind energy production there was a generalised fall. To this is added the drop in temperatures that made the electricity demand grow, and the stops of some nuclear power plants in France. The combination of these factors caused the market prices to rise. However, they are expected to fall next week due to rising temperatures and solar and wind energy production.

So far this week of November 18, until yesterday, the 20th, the solar energy production increased compared to the average values of last week in Spain, France and Italy, the latter being the market with the highest increase, of 22%. In other markets, such as Portugal and Germany, there were falls in the same period, of 8.4% and 22% respectively. According to AleaSoft’s forecasts, the current up and down trends in Italy and Germany respectively will be maintained at the end of this week, but in Spain the direction will change and the production will be below that of last week. Next week, the solar energy production is expected to rise in Germany, Spain and Italy.

As for the year‑on‑year analysis of the first 20 days of November, the production increased considerably in the Iberian Peninsula, 57%, but in the rest of the analysed markets it decreased, up to 20% in Germany. 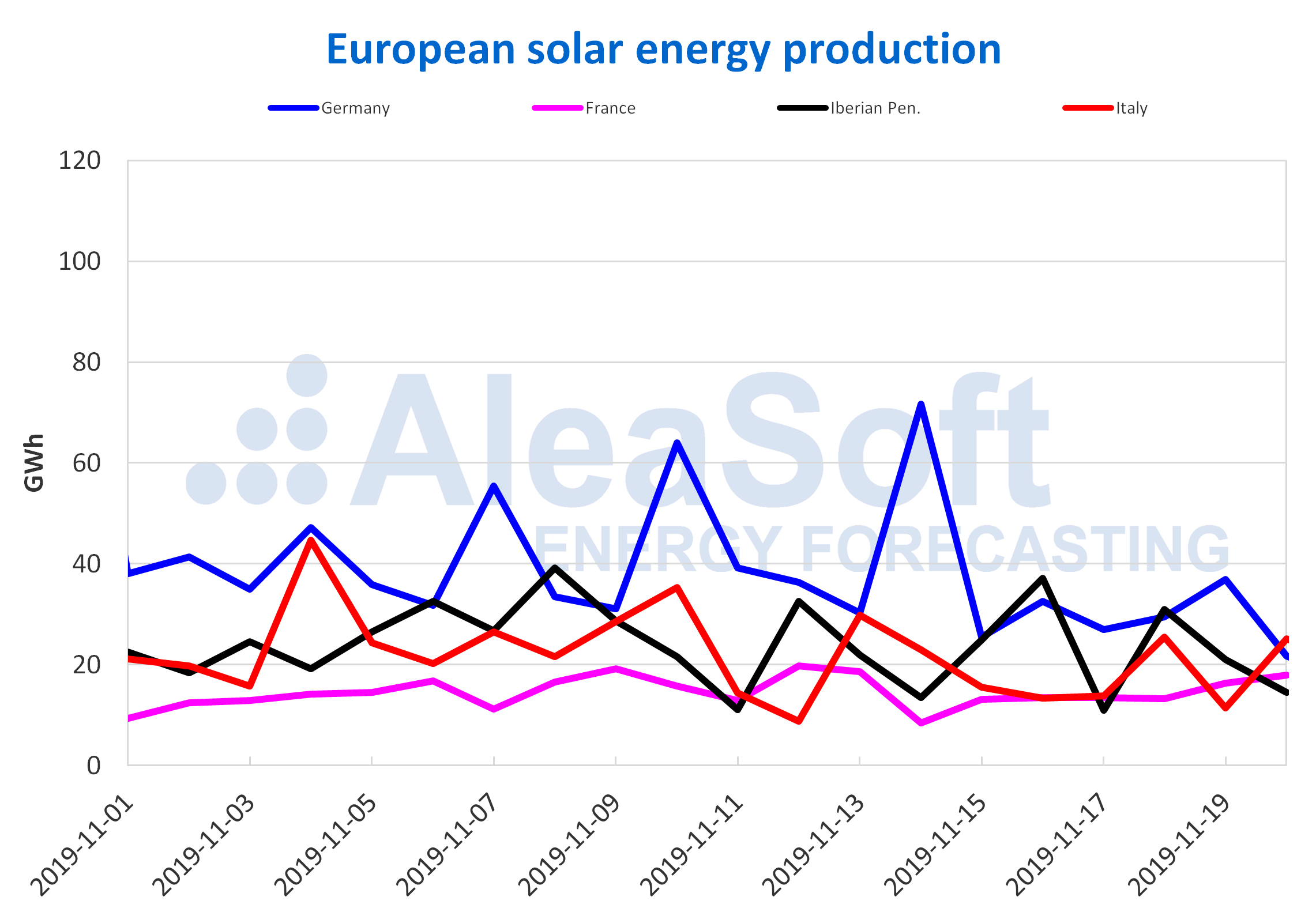 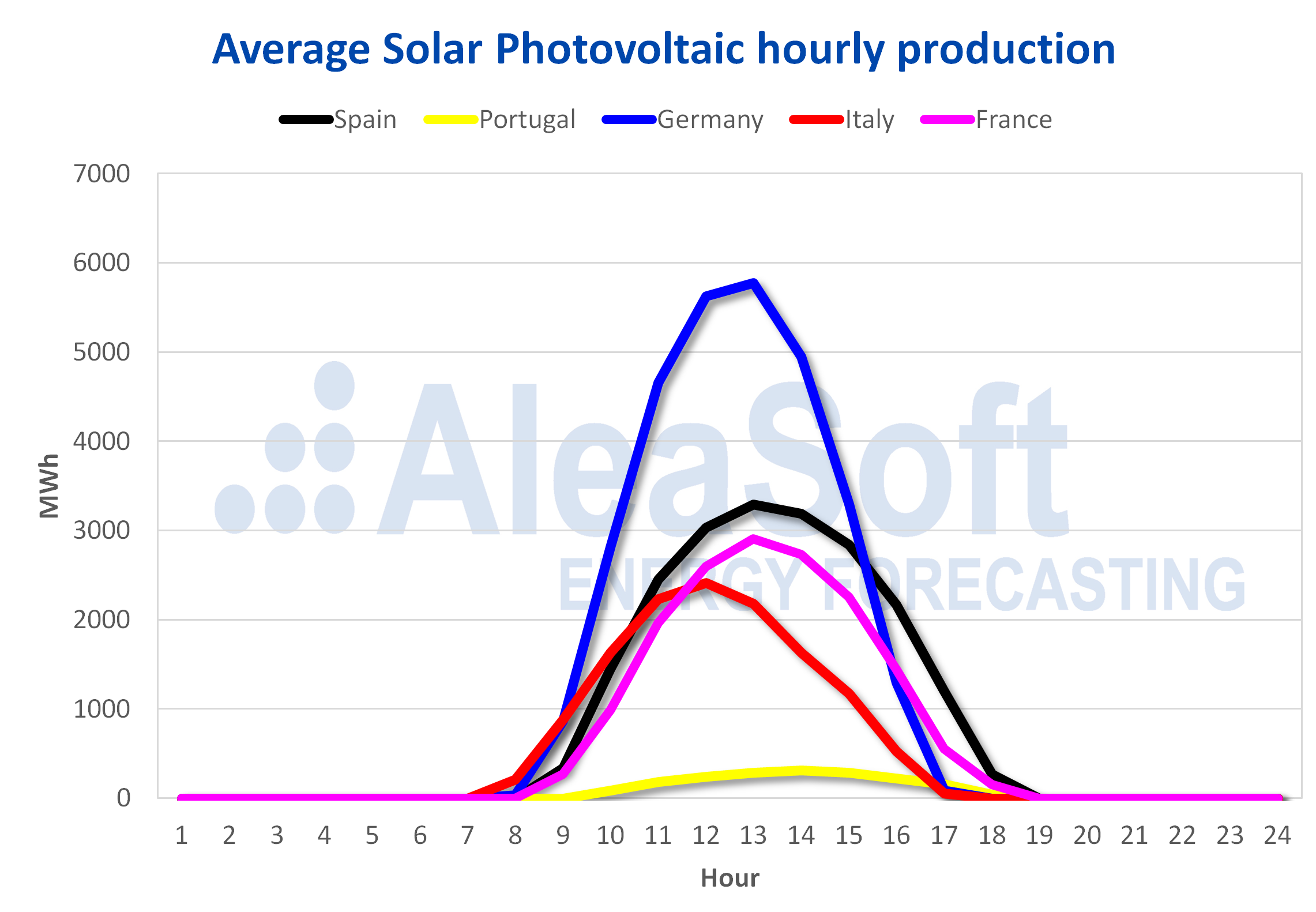 On the other hand, the wind energy production in the first three days of this week declined in a generalised manner in the analysed markets compared to the average production of last week, with falls ranging from that of Germany, of 24%, to that of Portugal, of 63%. It is expected that at the end of this week this same drop situation will be maintained, except in the case of France, where a slight recovery is forecasted. A recovery of the production with this technology is expected next week in most of the analysed markets, with the only exception of Italy. 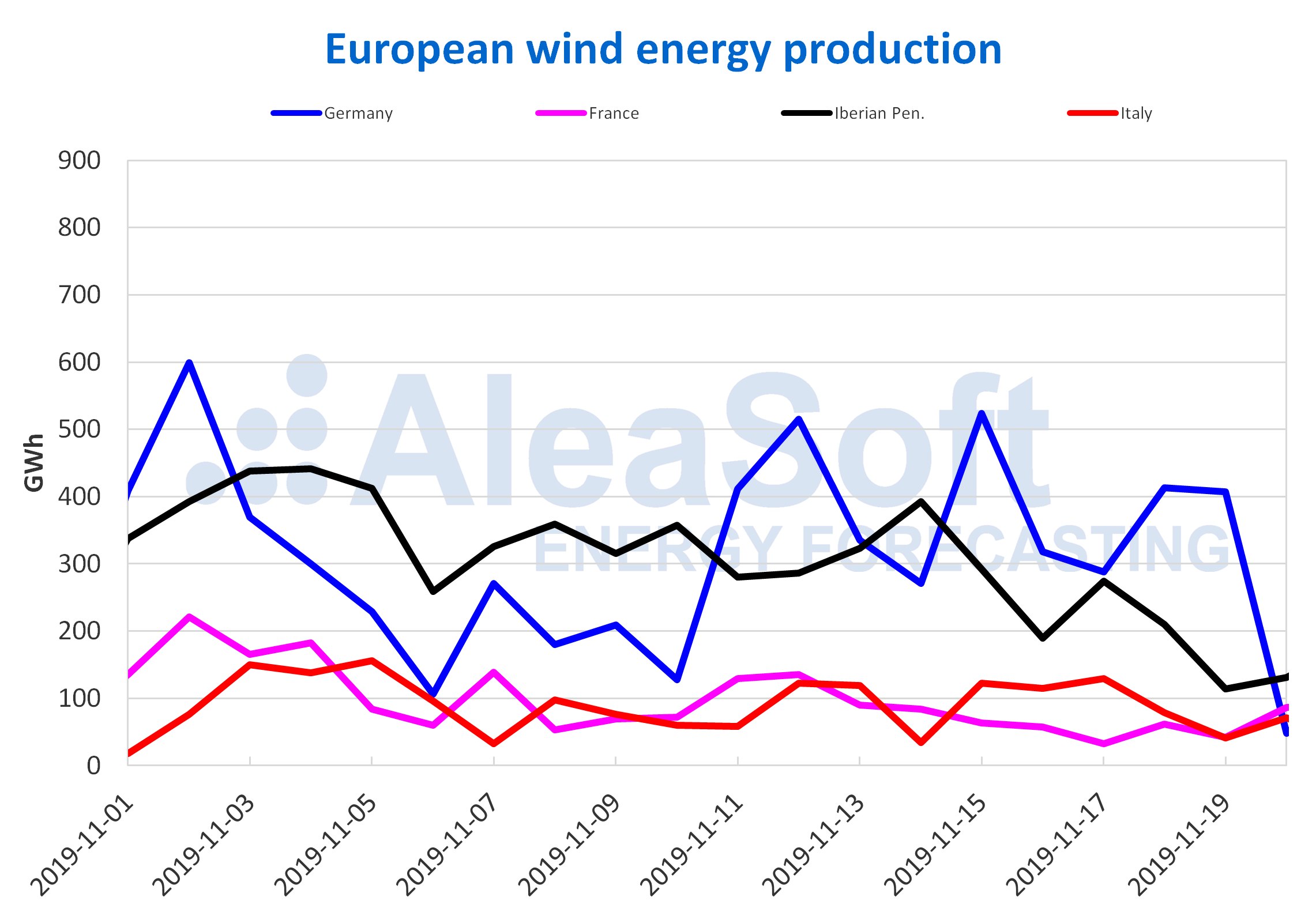 In the first three days of this week the average temperatures dropped compared to those of last week, except in Germany. The behaviour of the electricity demand was consistent with that of the temperatures, with increases in all markets, except in Germany. The greatest increases were those of France and Belgium, in both cases above 11%. In these two markets, the effect of the November 11 holiday is added to the effect of the temperatures.

At the end of this week, the balance is expected to be similar to the first three days. That is, in Germany the demand will be lower than last week and in the rest of the market it will be higher, but with more moderate growth. However, in Italy the demand is expected to decrease in the total calculation of the week.

The next week of November 25, the average temperatures are expected to rise in all the European countries analysed, except in Italy. In this case, the demand will behave contrary to the current week: declines in all markets except in Germany and Italy. 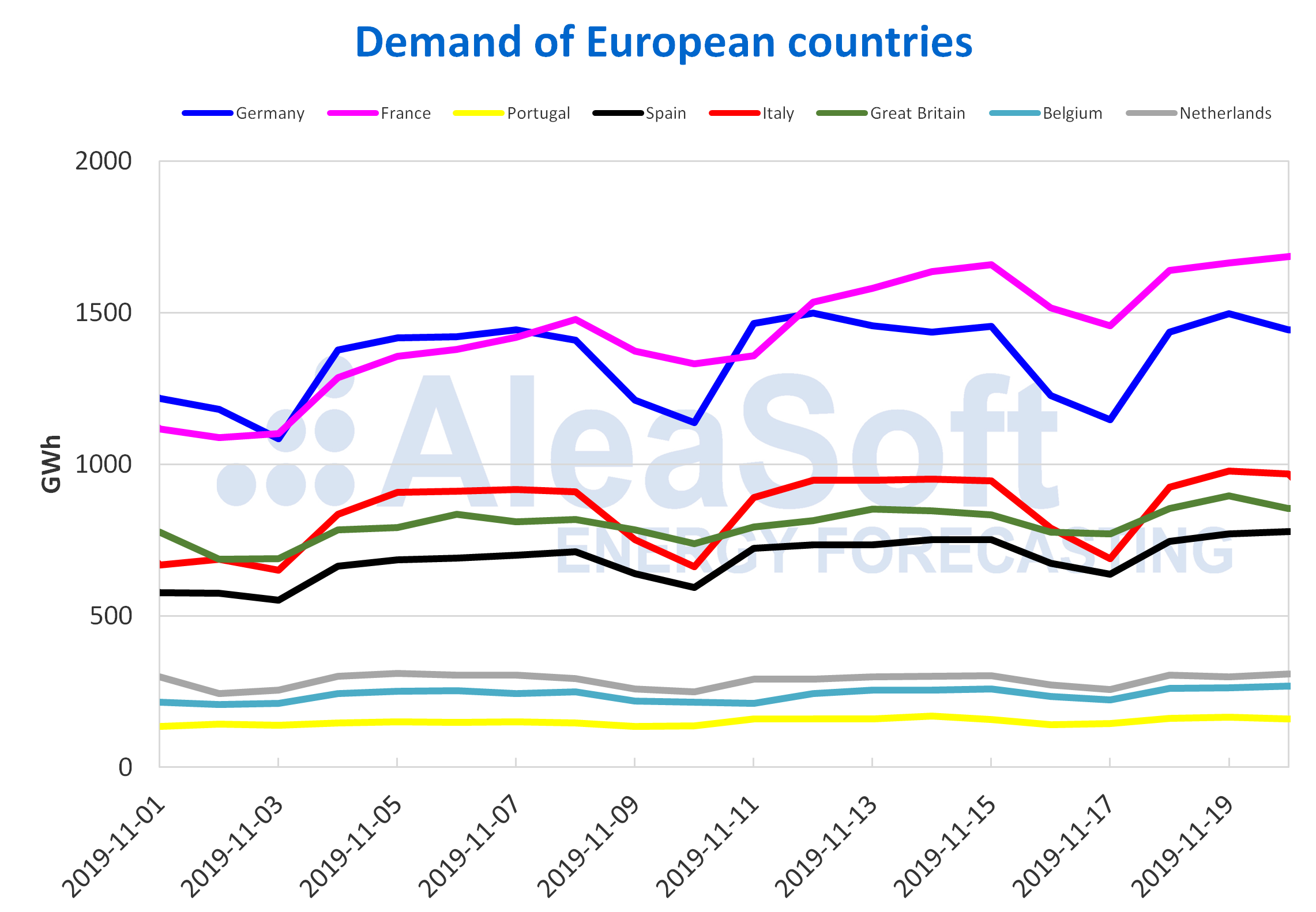 The increase in electricity demand in Mainland Spain, commented above, was 4.8% so far this week.

The production with other technologies increased in the first three days of this week compared to the same days last week, thus counteracting the increase in electricity demand and the decrease in wind energy production. The greatest increase was that of the coal-fired power plants energy production, of 51%, followed by that of combined cycle gas turbines, of 42%, and of hydroelectric energy, of 34%. The nuclear energy production grew by 25% because the Almaraz II plant, which had been stopped since October 6, was put back into operation on November 15. Currently, the Cofrentes and Vandellós II nuclear power plants continue stopped, which are scheduled to return to operation on December 9 and 19, respectively. 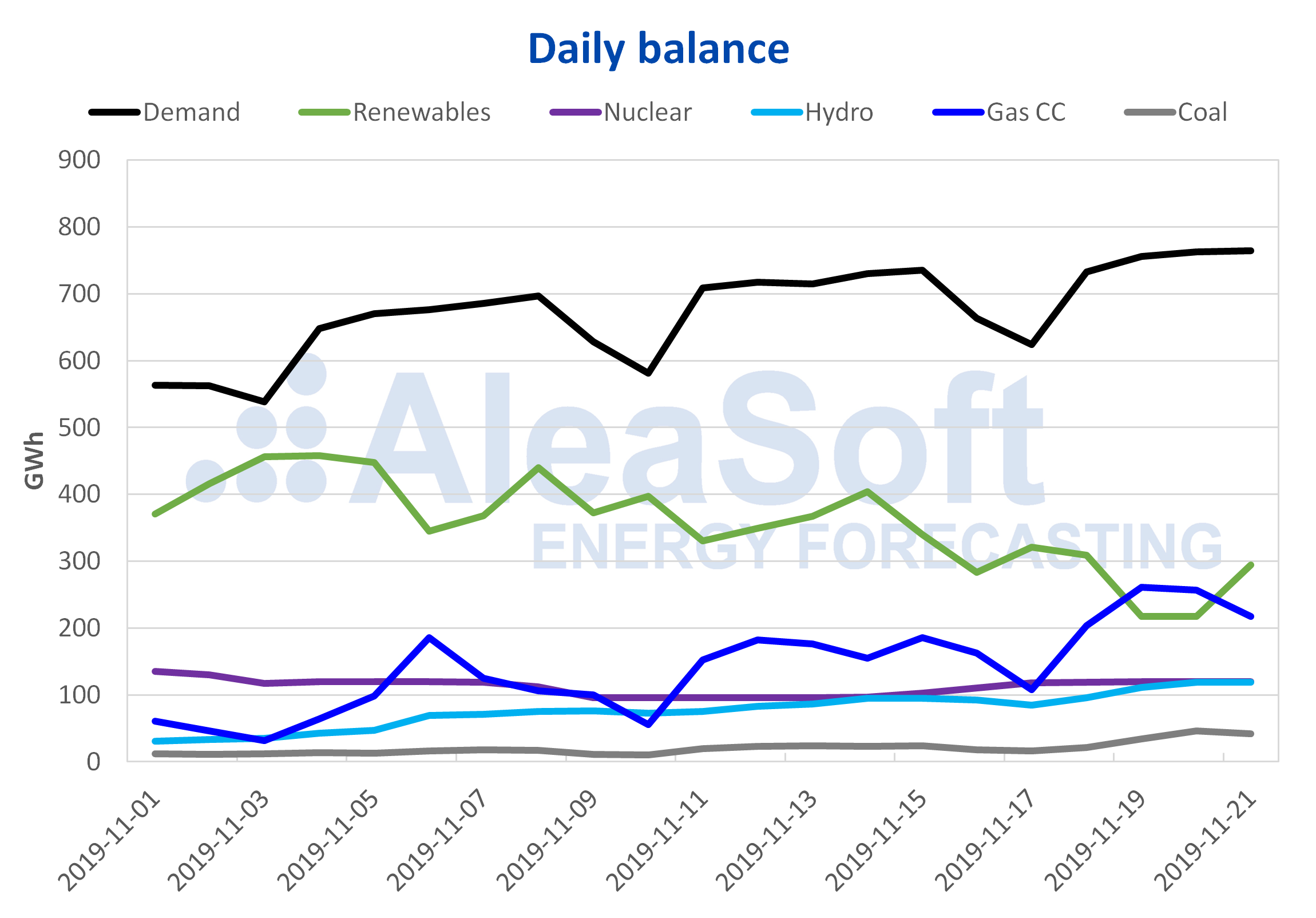 The hydroelectric reserves grew 540 GWh in the last week, according to data from the latest Hydrological Bulletin of the Ministry for Ecological Transition. This is the fifth consecutive week with increases. The reserves are currently at 8856 GWh, which represents 39% of total capacity.

The average price of most European electricity markets increased in the days elapsed this week compared to the same period last week. The Nord Pool market was the exception, with a price decrease of 2.3% and a difference of exactly €1/MWh. The rest of the markets showed increases of between 1.7% of the EPEX SPOT market of Belgium and 19% of the MIBEL market of Portugal. This rising price behaviour in most electricity markets was influenced by the increase in demand in much of Europe due to lower temperatures, and at the same time the solar and wind energy production in some markets presented significant setbacks so far this week. To this are added the nuclear stops of several French nuclear power plants that led to the rise in prices in France and the interconnected markets.

During the first four days of this week the market prices ranged between €40.96/MWh, of the EPEX SPOT market of the Netherlands, for Monday, November 18, and €64.20/MWh for Tuesday, November 19, of the EPEX SPOT market of France. This week the usual distribution of the markets in the two groups according to their price remains unfulfilled. The Nord Pool market of the Nordic countries, with an average of €42.61/MWh, continues to be the lowest‑priced market in Europe. The EPEX SPOT markets of the Netherlands, Germany and Belgium follow it, as second, third and fourth of this list, with average prices of €46.65/MWh, €47.80/MWh and €49.21/MWh, respectively. On the other hand, the EPEX SPOT market of France, which usually belongs to the lowest price group, due to the low production with renewable energies and the nuclear shutdowns, this week topped the list of the highest priced markets, with an average of €59.02/MWh. In this list it was followed by the Italian IPEX market with €57.84/MWh, the Iberian MIBEL market with €55.19/MWh and the N2EX market of Great Britain with €55.06/MWh. 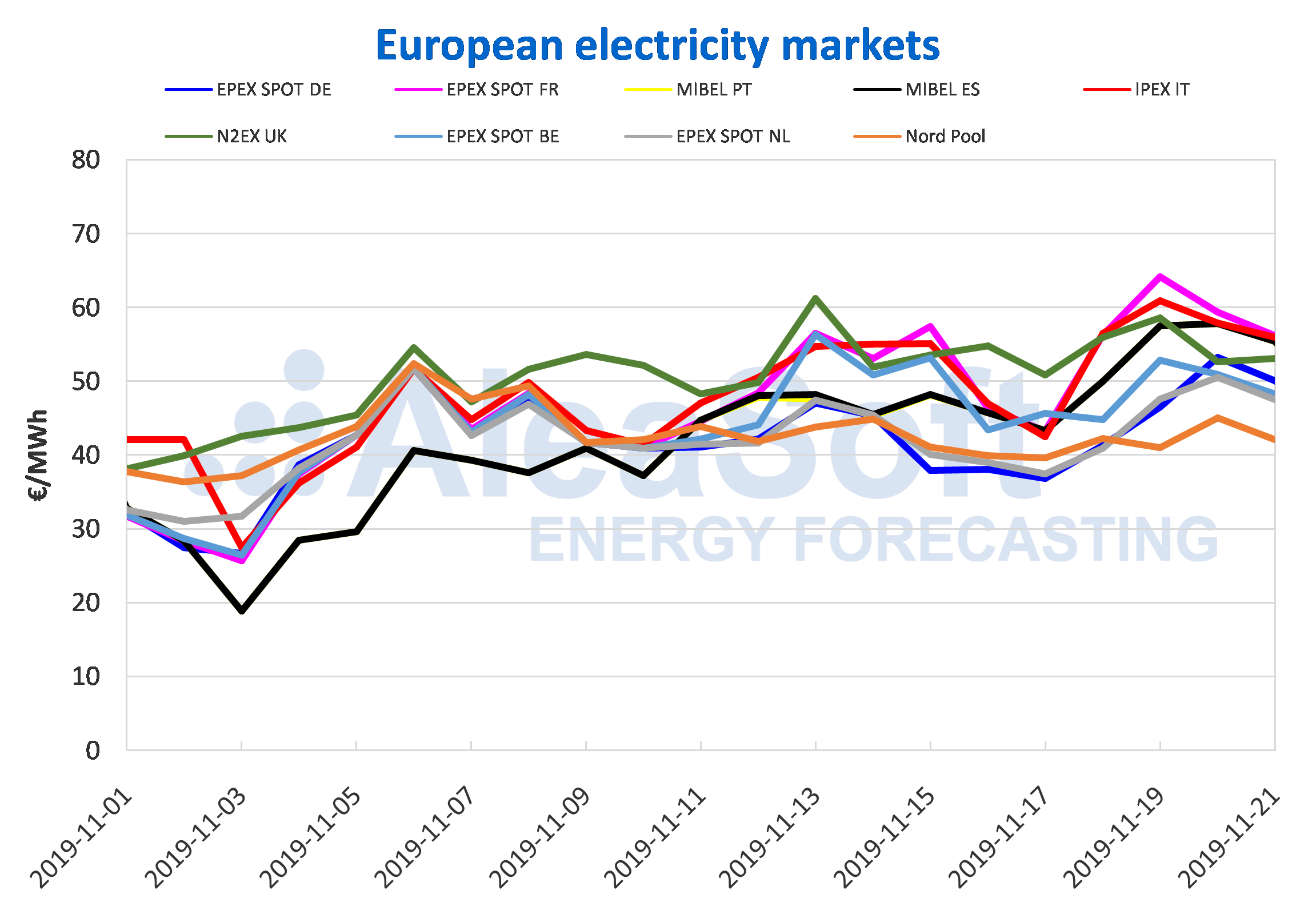 According to AleaSoft’s forecasts, in the rest of the week and for the next week the prices will drop, since increases in solar and wind energy production are expected in much of the continent, in addition to a rise in temperatures that would lead to a drop in electricity demand.

So far this week, the average price in the MIBEL market was €55.19/MWh for both the Spanish and Portuguese markets, with a convergence in the hourly price of both markets of 100%. The daily average prices for these four days remained between €50.01/MWh on Monday, November 18, and €57.85/MWh, yesterday, Wednesday, November 20, the highest so far this month. Both markets, with increases of 18% in Spain and 19% in Portugal, took the third place in the ranking of the markets with the highest prices in Europe.

From Monday, November 18 to Thursday, November 21, the daily average prices of the MIBEL market, for both countries, continued to increase compared to the same days last week. The price increase was conditioned by the decrease in wind energy production, together with the increase in electricity demand of both countries, due to the low temperatures that were registering since the first week of November. As seen above, the combination of these two factors boosted the thermal energy production that is usually offered at higher prices.

So far this week, most of the European electricity futures markets registered decreases for the product of the first quarter of 2020. The EEX market of Spain was the one with the highest percentage decline between the sessions of November 15 and 20, of 3.1%. On the other hand, the Nordic countries, after retreating last week, are once again the only region analysed by AleaSoft, in which the electricity futures for Q1‑20 increase their price, this time by 1.0% and 1.2% in the ICE market and the NASDAQ market respectively.

The same situation is repeated when analysing the electricity futures for the year 2020. With slightly more discrete movements than those of the previous product, but also with a general decline in prices between the session of Friday, November 15, and yesterday, November 20, except in the Nordic region. The most significant decrease was also carried out by Spain in the EEX market, with a variation of ‑1.7%. An interesting fact is that the price for the future of 2020 of the Nordic countries was matched in yesterday’s session in the ICE and NASDAQ markets, with a value of €37.40/MWh.

The fact that the levels of US oil reserves were lower than expected, the tensions in the Middle East and the news about Russia’s intentions to maintain the production cuts favoured this price increase. Although the concerns about the development of the negotiations between China and the United States to resolve their trade conflict could end up causing further price declines in the coming days.

The TTF gas futures in the ICE market for the month of December, on Monday, November 18, reached a settlement price of €15.23/MWh, a value €0.48/MWh below that corresponding to Friday, November 15. But on Tuesday the price rose 0.4%. This upward behaviour continued on Wednesday, when €15.59/MWh was reached. This increase is related to the low temperatures of these days, but also to the unplanned interruptions that caused a decrease in gas supply from Norway as of Tuesday. Although a change in price trend is expected in the coming days due to the increase in wind energy production and the recovery in gas supply levels from Norway.

On the other hand, the TTF gas prices in the spot market continued this week with values around €15/MWh, as was happening since November 9.

The CO2 emission rights futures in the EEX market for the reference contract of December 2019, on Monday, November 18, reached a settlement price of €23.40/t, the lowest so far this month. On the other hand, on Tuesday the prices began to recover rising 0.2%. On Wednesday the rise was greater, 2.5%, and the settlement price was €24.03/t. But, despite this price recovery, the price of yesterday, Wednesday, November 20, was still 1.5% lower than that of Wednesday of last week. 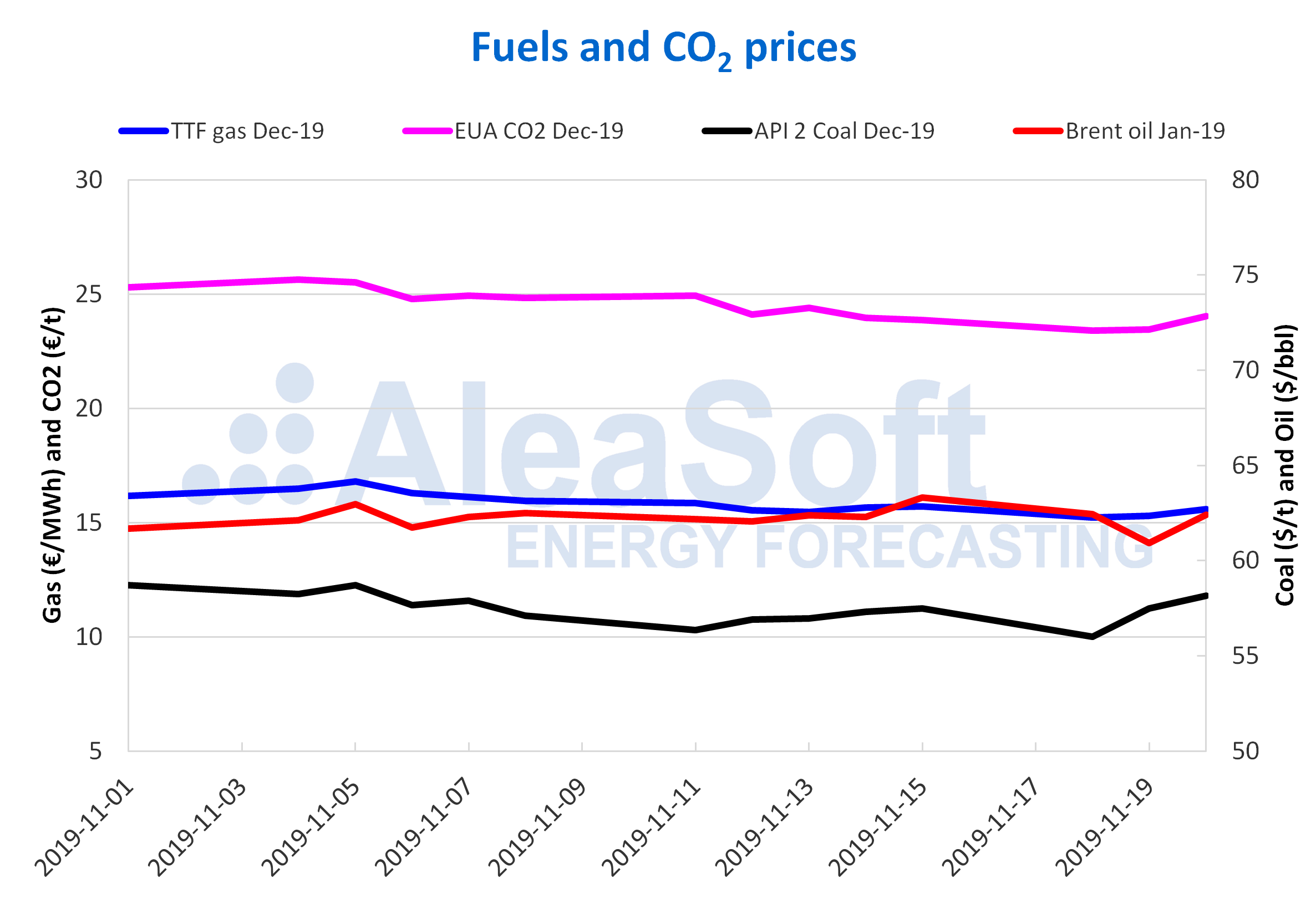 PrevAnteriorAleaSoft participates in the National Congress of Renewable Energies of APPA: a vision of the future of the sector
SiguienteThe definition of the reasonable profitability is essential to stimulate investmentsNext
Menu
Facebook-f Twitter Linkedin Instagram