The escalation of the CO2 prices: temporary or systemic?

AleaSoft, April 27, 2021. The energy markets are on the rise and the CO2 emission rights prices are clearly standing out. The concern among the large consumers about the nature and scope of this upward trend of the CO2 was one of the topics that were addressed at the analysis table of the webinar organised by AleaSoft with the participation of speakers from Axpo.

During the second and last part of the webinar series “Prospects for the energy markets in Europe. Spring 2021”, which was held last Thursday, April 15, organised by AleaSoft and with the participation of two speakers from Axpo, the evolution of the energy markets in Europe in recent months and the upward trends registered in the CO2 emissions rights, above all, but also in the electricity and gas markets prices were analysed.

In addition, other topics were also discussed such as which the new players are and the role that they are playing in the financial markets for financing the new renewable energy projects, the taking of positions regarding the climate change of the large stakeholders worldwide and the corporate PPA as solutions for the industry and for the renewable energies. The webinar speakers were Fernando de Juan Astray, Head of Origination and Long‑Term Products at Axpo Iberia, and Ana Manzano, Originator Long‑Term Products at Axpo Iberia, as well as Oriol Saltó i Bauzà, Manager of Data Analysis and Modelling at AleaSoft, and Antonio Delgado Rigal, CEO of AleaSoft, who participated in the subsequent analysis table.

The recovery of the electricity demand

It has already been one year since the arrival of the COVID‑19 pandemic in Europe, and the beginning of the restrictions on the mobility, the commercial and economic activity and that of the educational centres. The first country in Europe to suffer the consequences of the coronavirus and the first state to apply a practically general lockdown was Italy at the beginning of March 2020, although some local and regional lockdowns began as early as the end of February.

The rest of the countries followed it with confinements that began during the second half of March and that were tightening the restrictions during the following weeks. The following graph, which shows the year‑on‑year variation in electricity demand for each month since January 2020, clearly shows the peak of year‑on‑year demand growth in Italy in March 2021 above 12%, after that in March 2020 it fell by 10%. The rest of the countries show more moderate growths in March given that the restrictions began later. At the end of the month of April, clearly higher growth values will already be observed since the demand minimums were registered during April and May 2020.

The upward trend in the energy markets prices

Regarding the prices, it can be summarised that the trend in recent months in the prices of the electricity, the gas and, above all, the CO2 markets is clearly upward. Many of the questions from the webinar attendees went in this direction, on how the rise in CO2 prices is affecting the spot and futures electricity markets. 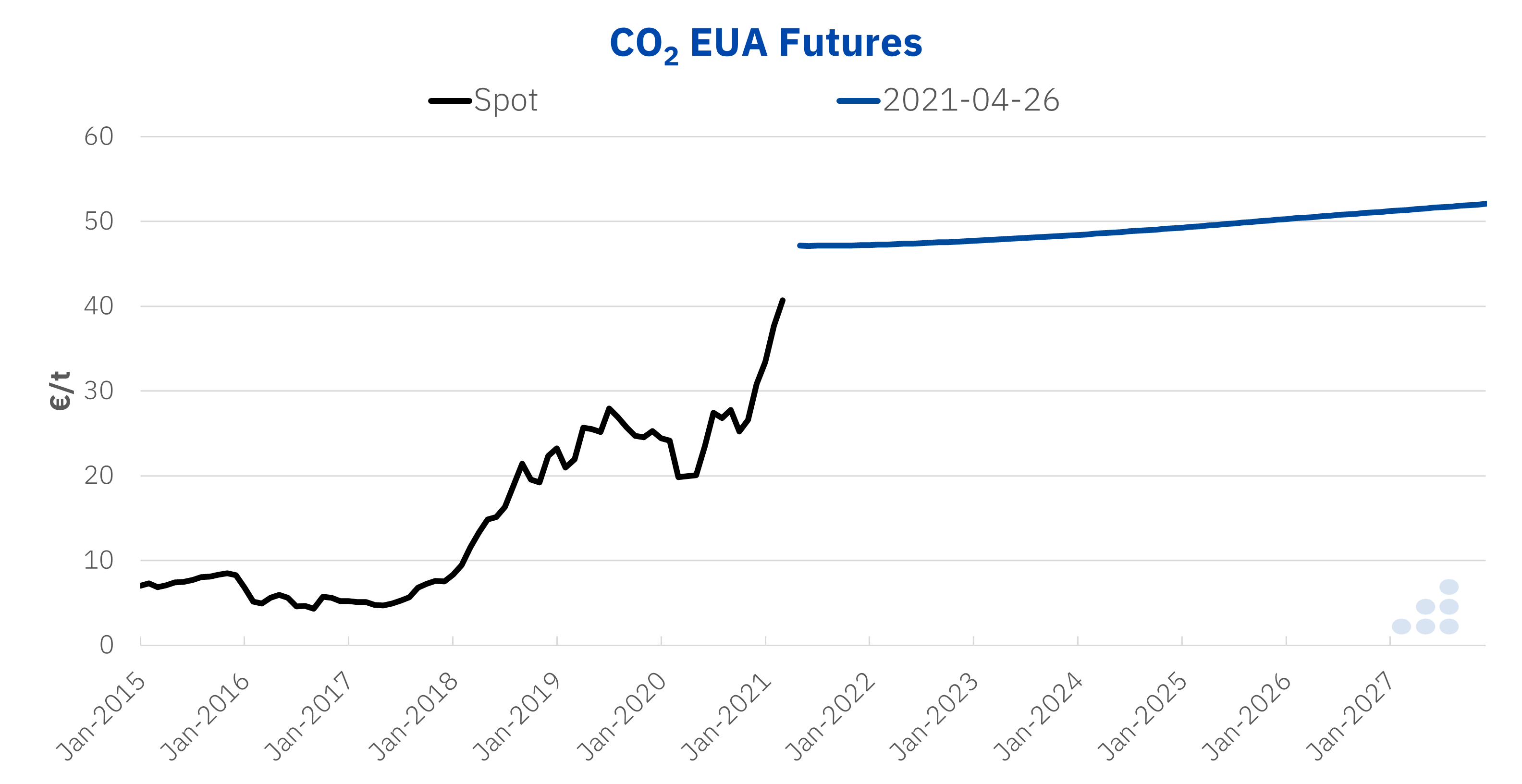 One of the major concerns of the large consumers and the electro‑intensive industry is whether this escalation in emission rights prices is temporary or it is systemic and of a more permanent nature. During the discussion table of the webinar, the reasons that may lead to thinking about the possibilities came up. The fact that the European Emissions Trading System (EU ETS) is a tool created to incentivise the decarbonisation of the economy makes it necessary that the prices remain high enough to compensate for the switch from coal to gas and, subsequently, from gas to hydrogen. This could lead to thinking that the high prices could be maintained in a general way in the future.

On the other hand, the speculative component that the emissions market has, and also its relationship with the gas prices, may suggest a temporary rise that at some point will fall to levels closer to €20‑30 per ton. In any case, the existence of the Market Stability Reserve (MSR), if used correctly, should always ensure the fair price necessary to meet the emissions reduction targets without representing an unaffordable cost for the large energy consumers.

Among the questions from the public, there were also some referring to the AleaSoft‘s experience in forecasts for other markets beyond the Iberian market. Oriol Saltó i Bauzà commented that the experience in practically all the markets in Europe already extends to many years. He also highlighted, at the request of the audience, that the AleaSoft‘s long‑term forecasts reports contain hourly prices forecasts for the thirty‑year horizon, necessary, for example, to estimate the expected income from the production profile of a plant, and the confidence bands in the forecasts, which provide a quantification of the probability of the occurrence of the prices and which are a necessary input for the risk management models.

Also from Axpo they highlighted the importance of taking into account all the aspects that can influence the market prices, both bullish and bearish factors, when having forecasts for the decision‑making for the long‑term hedging strategies. Hence the importance of having reliable and coherent electricity market forecasts such as those offered by AleaSoft.

This important role of the market prices forecasts for the development of the renewable energies will be one of the topics to be discussed in the next webinar organised by AleaSoft for the next May 13.

PrevAnteriorThe fall in renewable energy causes maximum prices since January in the Spanish electricity market
SiguienteWhat is necessary for everything that can be smart to be smart in the energy sector?Next
Menu
Facebook-f Twitter Linkedin Instagram