AleaSoft, September 8, 2021. The high prices that are being registered in the electricity markets of Europe, and that are affecting the consumers, have an important part of their origin in the escalation of the CO2 emission rights prices. This CO2 market is regulated by the European Union and it has the authority to lower prices without having to jeopardise the energy transition. This opinion is shared by Antonio Hernández García, Partner for Regulated Sectors and Economic Analysis at EY.

The alarmist headlines about the rise in electricity bill prices for European consumers mainly highlight the increase in gas prices as the main cause of the rise in prices in the electricity markets. Undoubtedly, the upward trend of gas prices is one of the main responsible for this episode of high prices that is being registered in markets throughout Europe. But another key factor in this situation, the CO2 emission rights prices, is not always paid the necessary attention. 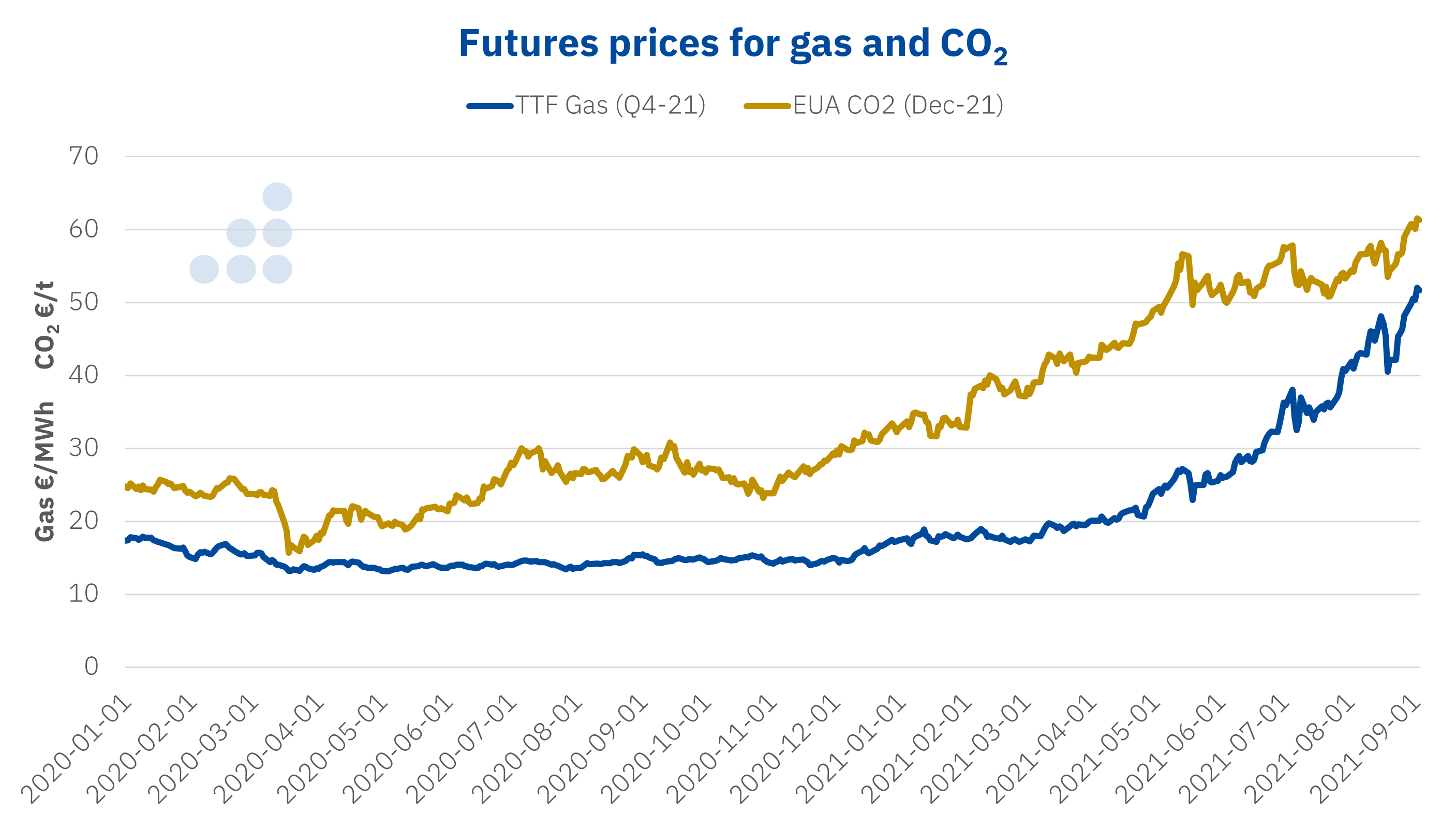 The costs of producing electricity in a combined cycle gas turbine plant include both the cost of its fuel, gas, and the costs of emitting CO2 into the atmosphere, and for which they must buy and redeem emission allowances. These costs are transferred to the offers that these plants make in the electricity markets, so that the higher the price of gas and CO2, higher costs, offers at higher prices and, finally, higher prices in the market and on the bill of the end consumers. And in situations where the production of the combined cycle gas turbine plants increases, the impact of gas and CO2 prices is greater.

If what the Government or the European Union can do to reverse the situation of extraordinarily high prices that are being registered in the electricity markets is considered, the actions can basically focus on lowering gas or CO2 emission rights prices. Gas is a fuel with a global market that is affected by more local situations, such as the supply on the continent or the levels of the reserves for the winter, but also by global situations, such as the increase in demand in Asia due to the recovery from the economic crisis. So, beyond mid‑ and long‑term measures to improve the supply sources or the storage capacity, little can be done at European level to reverse this situation in the short term.

But CO2 emission rights are in a market with very different characteristics. To begin with, it is a strictly European market, created by the European Union to penalise the most polluting processes and favour the decarbonisation of the economy. On the other hand, the European Union has a mechanism to control the supply of allowances in the market, being able to effectively control the price level.

The Market Stability Reserve (MSR) was created with the idea of preventing prices from sinking due to the oversupply of allowances, as happened in 2007 and 2013. With a too low price, emission rights stop being an incentive for the decarbonisation. That prices are not too low makes sense for a market like that of the CO2 with a goal such as the greenhouse gas emissions reduction.

But it is also true in the opposite direction. Too high prices can seriously harm consumers, both large electro‑intensive consumers and small consumers in SMEs and households. The possibility of reducing the CO2 emission rights prices and thus help to reverse the situation of high electricity markets prices is in the hands of the European Union and all European governments.

It is simply, no more and no less than a question of political will.

It is not about jeopardising the energy transition. The importance and necessity of allowances are not being questioned. Allowances are essential for the decarbonisation and the energy transition. It must be the tool that encourages this change in the production of goods and in the electricity generation, but it must do so without harming consumers, and less in times like the current ones in the middle of the recovery from an unprecedented economic crisis.

At this point in the transition, a CO2 price between €30 and €40 per tonne would be enough to get closer to the 2030 targets for the greenhouse gas emissions reduction by 55% compared to 1990 levels, without causing a rise in prices in the electricity markets with the consequent damage to consumers.

On this subject, Antonio Hernández García, a partner of EY who handles regulatory issues as Partner for Regulated Sectors and Economic Analysis, was asked for an opinion and he commented the following: “We are in a situation of significant increase in prices in the wholesale electricity markets, generalised in the European Union. This rise is mainly due to the geopolitical situation, which stressed the gas market, but also CO2 prices, which significantly exceeded the levels that were forecasted. In this context, in addition to possible actions aimed at reducing the gas supply problems, a situation that is complex in the coming months and which also depends on exogenous factors, it would be very positive that the European Union considered measures to reduce the tension in the CO2 market. This possibility of putting more allowances in the market might occur while this adverse situation in the gas markets lasts and especially until the CO2 border adjustment mechanism can come into force and it would be in line with the objective of temporarily protecting in this situation to the most vulnerable consumers and avoiding the loss of international competitiveness of the European companies (carbon leakage)”.