AleaSoft, September 6, 2021. The European electricity markets prices continue to rise and registered historical highs in several markets in the first days of September. The increases also extended to the electricity futures markets. Gas and CO2 futures set record highs and are one of the causes of the price increases of the electricity markets along with the increase in demand and the fall in wind energy production. The solar energy production increased in most markets.

The solar energy production increased in most of the main European markets during the first week of September compared to the previous week. The behaviour in almost all the markets was opposite to that of the previous week, except in Spain where it decreased again, this time by 5.3%. The German market registered a 38% recovery, while in Italy it was 2.0%. For its part, the production with this technology in the Portuguese market rose by 2.7%. In the French market, the solar energy production fell by 13%.

For the week of September 6, the AleaSoft‘s solar energy production forecasting indicates that values similar to those of the week of August 30 will be registered in Germany and Italy, while it will decrease in Spain. 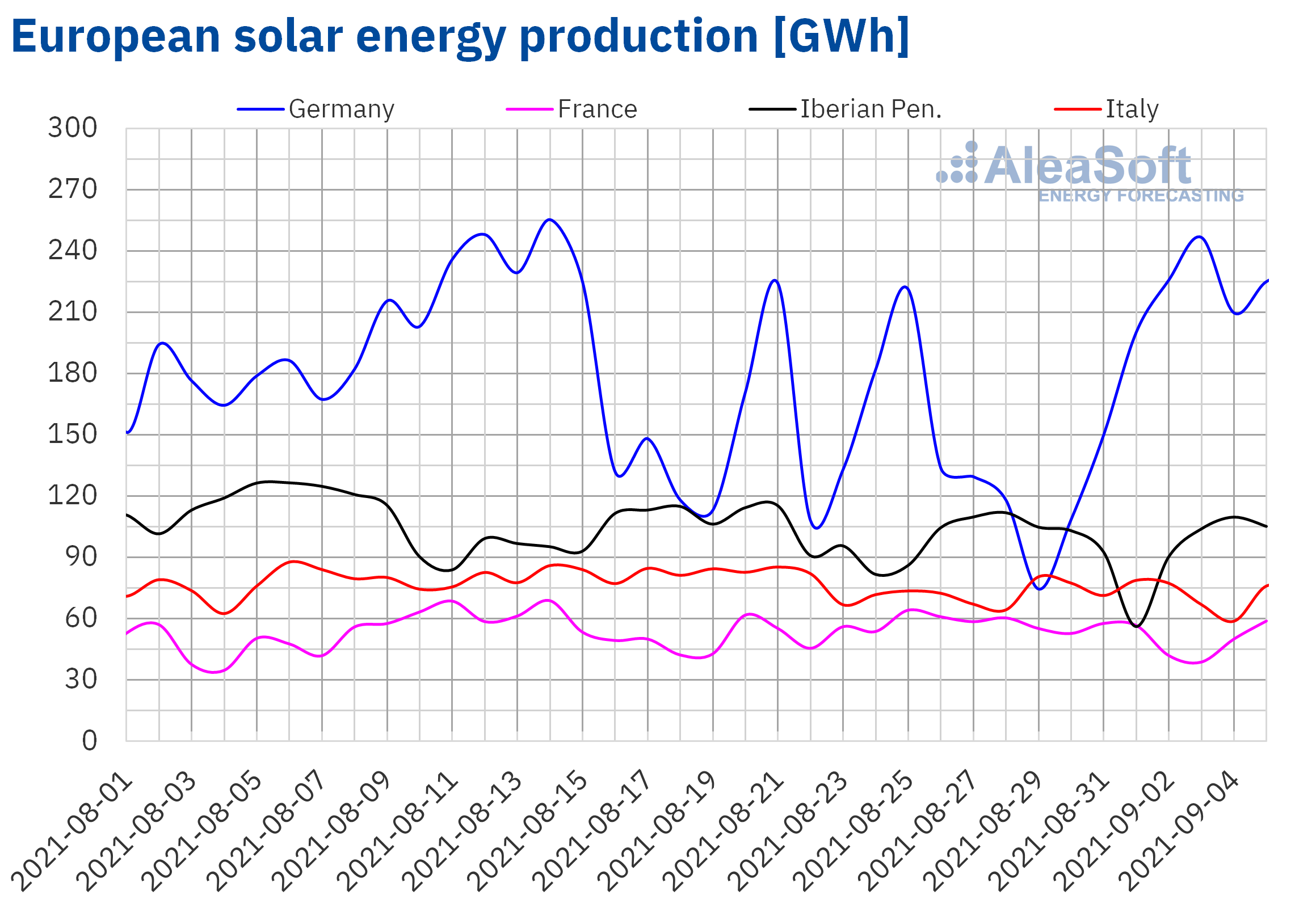 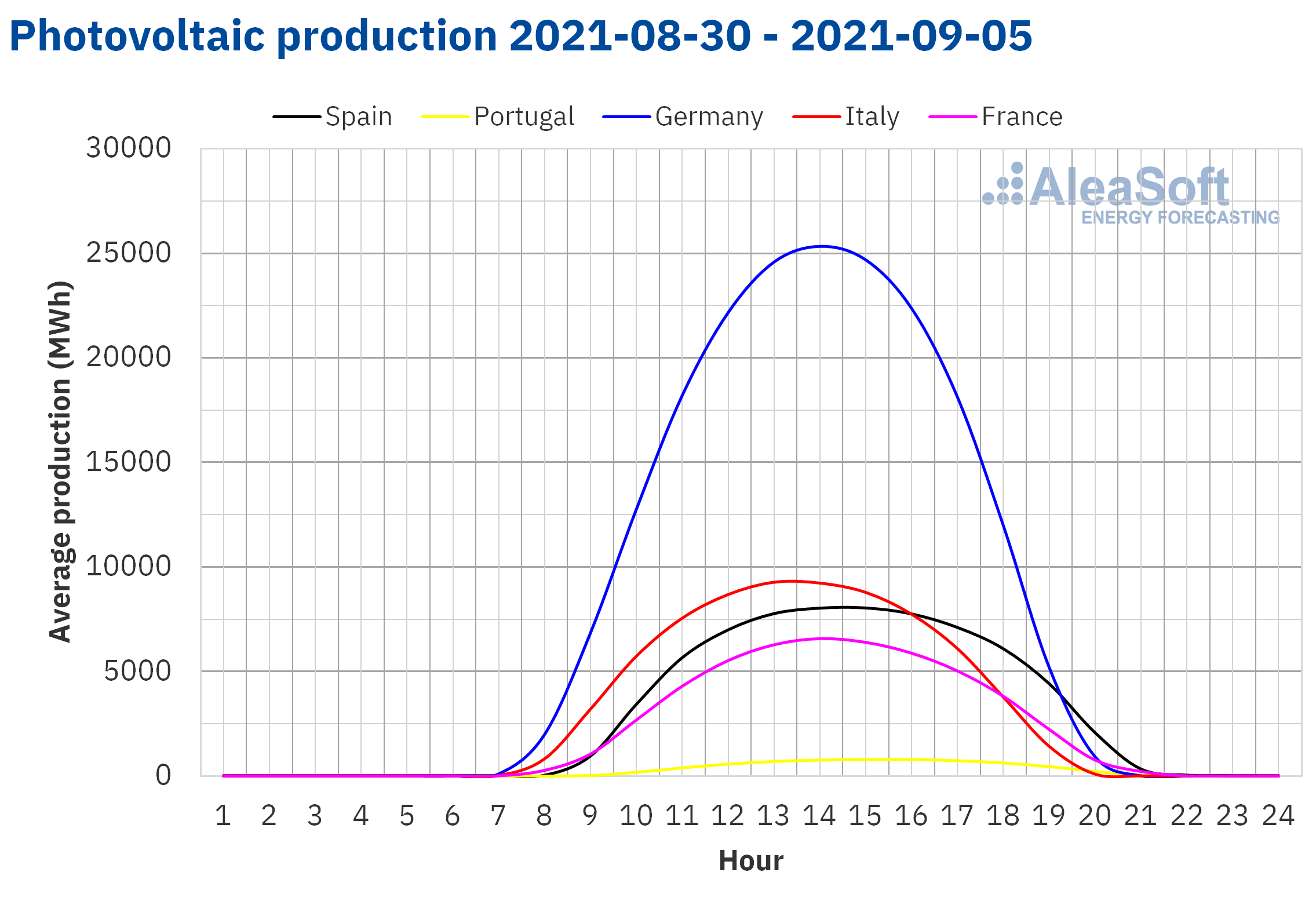 In the week of August 30, the wind energy production fell in a generalised way compared to the previous seven days in the main electricity markets of Europe. For the second consecutive week there were falls of this type of generation in Spain, Germany and Portugal, which were 53%, 51% and 21% respectively. In particular, the wind energy production in the Spanish market, of 423 GWh, was the lowest since the week of September 17, 2018.

The AleaSoft‘s wind energy production forecasting for the second week of September indicates that it will recover in the Iberian Peninsula but will continue to decline in the rest of the markets. 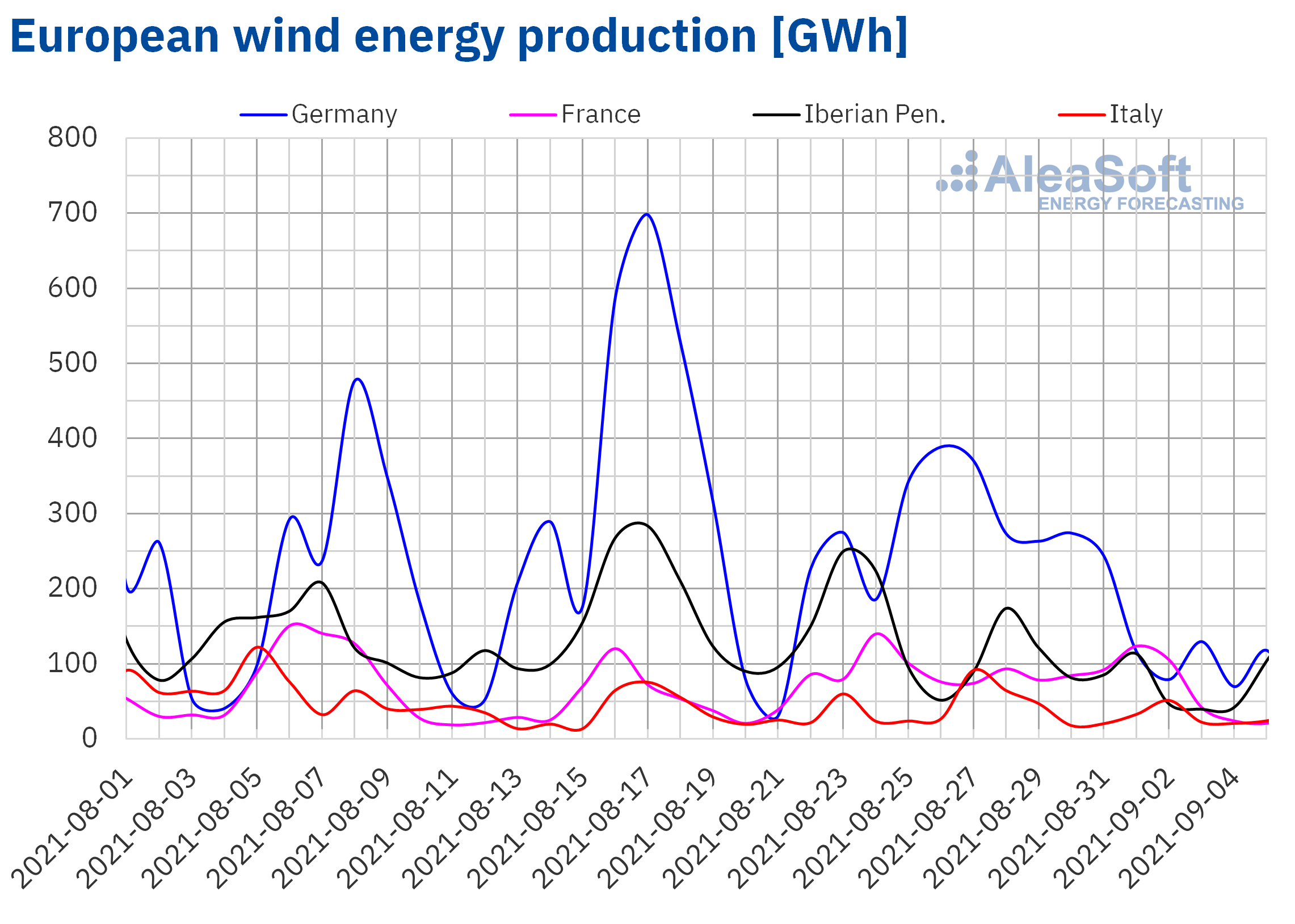 In the week of August 30, the electricity demand had a mostly upward behaviour in the European markets analysed at AleaSoft. The largest increase compared to the week of August 23 was registered in the market of the Netherlands, which was 4.9%, followed by a 3.6% rise in the French market. On the other hand, the Belgian market was the one with the lowest increase, of 0.6%. The exception was the Spanish market, where the demand decreased by 1.2%. In this case, the drop in average temperatures compared to the values of the third week of August favoured this decline. As can be seen in the AleaSoft’s demand observatories, on Monday, and from Thursday to Saturday, the demand of Spain was well below that registered during the same days of the previous week. In the rest of the markets the increases were between 1.0% and 2.4%.

The AleaSoft‘s demand forecasting for the week of September 6 indicates that it will continue to increase in most electricity markets of Europe. 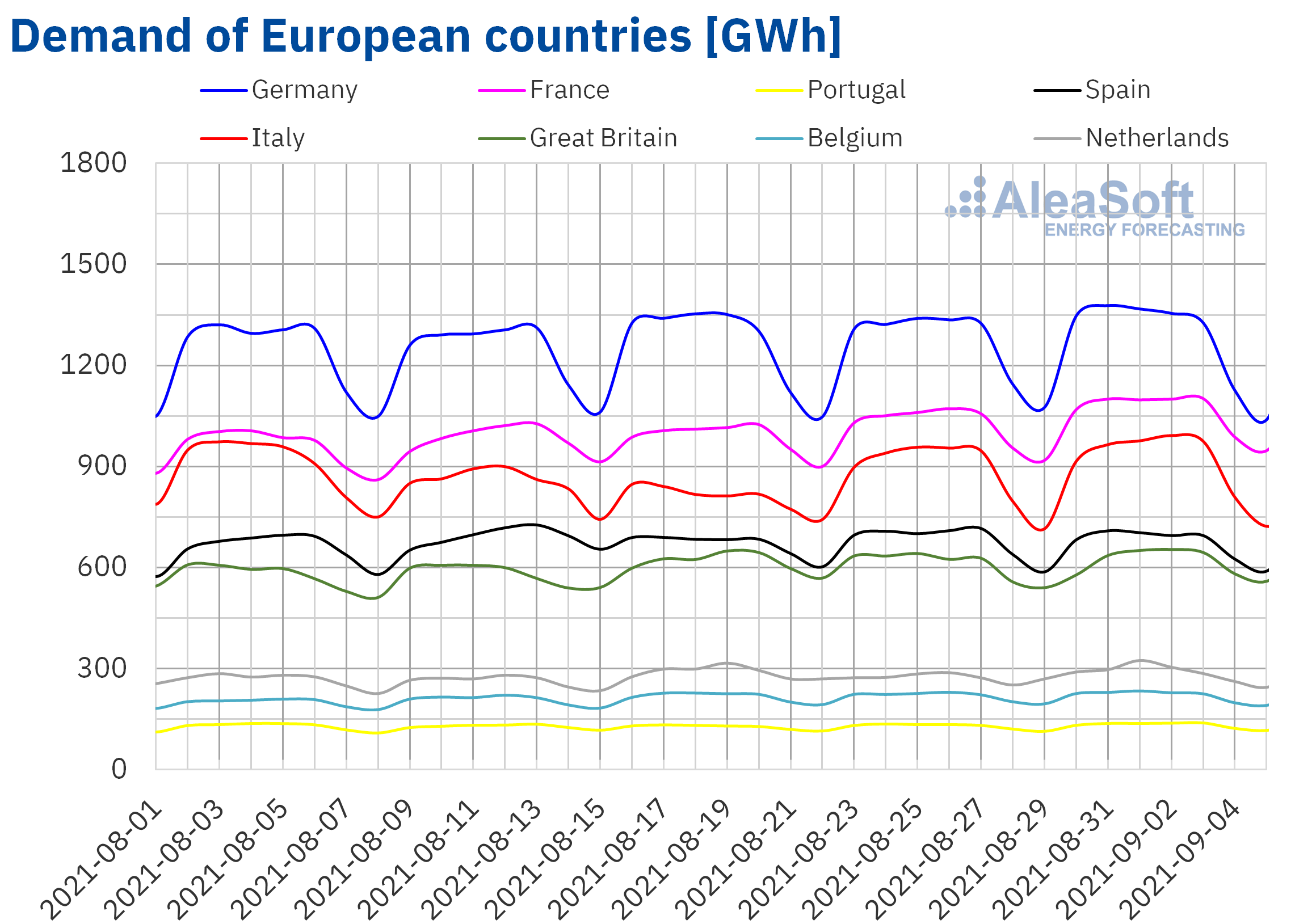 In the first week of September, the highest weekly average price was that of the N2EX market of the United Kingdom, of €150.35/MWh. On the other hand, the lowest average was that of the Nord Pool market, of €77.88/MWh. In the rest of the markets, the prices were between €106.14/MWh of the EPEX SPOT market of France and €132.71/MWh of the MIBEL market of Spain and Portugal.

On the other hand, in the Italian market, on Friday, September 3, the highest price at least since January 2005, of €145.29/MWh, was reached. In the MIBEL market, the historical maximum was reached on Thursday, September 2, with a daily price of €140.23/MWh.

During the first week of September, the increase in demand in most of Europe favoured the increase in electricity markets prices. This trend was also contributed by the general decline in wind energy production and the drop in solar energy production in countries such as France and Spain, in addition to the high gas and CO2 emission rights prices, markets in which records were also registered during the analysed week.

The AleaSoft‘s price forecasting indicates that in the week of September 6, prices will continue to increase in most European markets, influenced by the outlook of high gas and CO2 prices and the decrease in wind energy production. However, prices could fall in the MIBEL market, where the production with this technology is expected to increase. 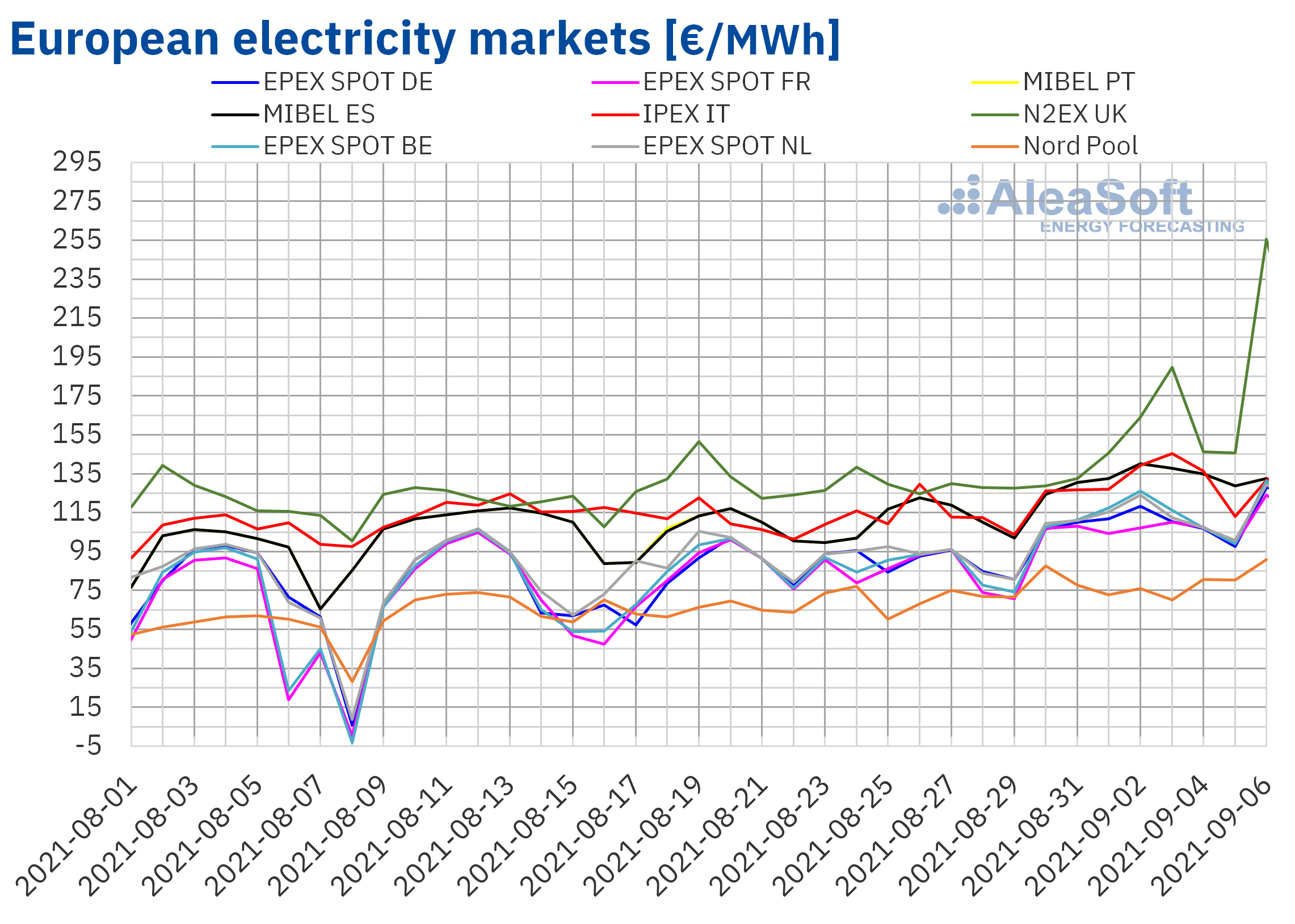 The electricity futures prices for the year 2022 also increased in all the analysed markets at the settlement of the session of September 3 compared to those of the previous Friday. In this case, the ICE market of the Nordic countries and the NASDAQ market of the same region were those with the greatest variation, close to 14% and 12% respectively. While the EEX market of the United Kingdom and the ICE market of Belgium registered the smallest increases, of 4.3% in both cases. In the rest of the markets the increases were between 4.4% and 6.7%. On the other hand, the EEX market of Italy was the one with the highest price for this product, of €99.51/MWh, while the markets of the Nordic countries were those with the lowest prices, below €44/MWh.

The settlement prices of the Brent oil futures for the month of November 2021 in the ICE market exceeded $71.50/bbl during the first week of September. The maximum settlement price of the week, of $73.03/bbl, was that of Thursday, September 2. This price was 4.1% higher than that of the previous Thursday and the highest since the end of July.

At the OPEC+ meeting held on September 1, it was agreed to continue with the progressive increase in production as planned. Thus, OPEC+ did not take into account the requests of the United States for greater increases in production, since the demand might fall by the end of the year. At the next meeting of October 4, it will be reviewed if these increases are maintained, given that the concern about the effects of the pandemic on the recovery of the demand continues. On the other hand, negative data on employment in the United States are influencing prices down in the session of Monday, September 6.

As for the settlement prices of the TTF gas futures in the ICE market for the month of October 2021, during almost the entire first week of September, they exceeded €50/MWh. The maximum settlement price of the week, of €51.92/MWh, was reached on Thursday, September 2. This price was 12% higher than that of the previous Thursday and the highest in at least the last two years.

Regarding the CO2 emission rights futures prices in the EEX market for the reference contract of December 2021, in the first week of September they remained above €60/t. The maximum settlement price of the week, of €61.52/t, was also registered on Thursday, September 2. This price is, in addition, the new all‑time high so far. The decrease in the number of auctions in the first week of the month favoured that this new record price for the CO2 emission rights futures was reached. 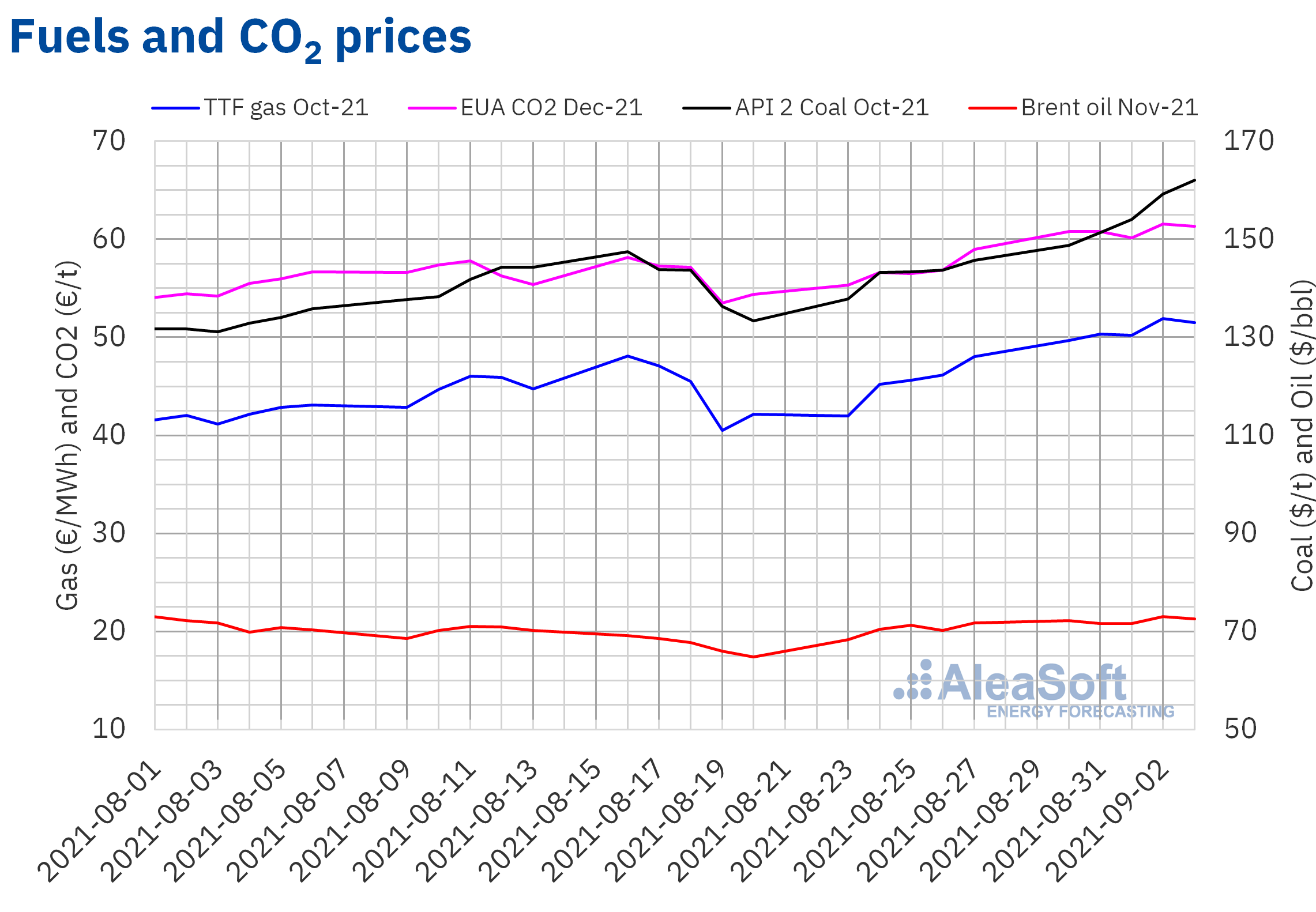 Next Thursday, September 9, a workshop will be held at AleaSoft, in which the importance and usefulness of the short‑term electricity markets prices forecasting to operate in the spot and futures markets will be shown. In the workshop, the use of the Alea Energy DataBase (AleaApp) for the compilation, visualisation and analysis of European electricity markets data will also be explained.

Later, on October 7, the monthly webinars organised at AleaSoft will resume, this time accompanied by speakers from the consulting firm Deloitte. This webinar will take place almost a year after the one held in October 2020 with the same speakers. At this year’s meeting there will be an update on the topics discussed on that occasion, relating to the evolution of the European energy markets in the last year, the renewable energy projects financing and the importance of the forecasting in audits and portfolio valuation.