In Europe, wind and photovoltaic energy continue not being able to stop the rise of electricity market prices

AleaSoft, July 29, 2019. Prices of the main electricity markets in Europe clearly rose during the last week at the same pace as the temperatures. The increase in renewable energy production, especially wind and photovoltaic energy in Germany and Italy, was not enough to tackle the rise in prices. 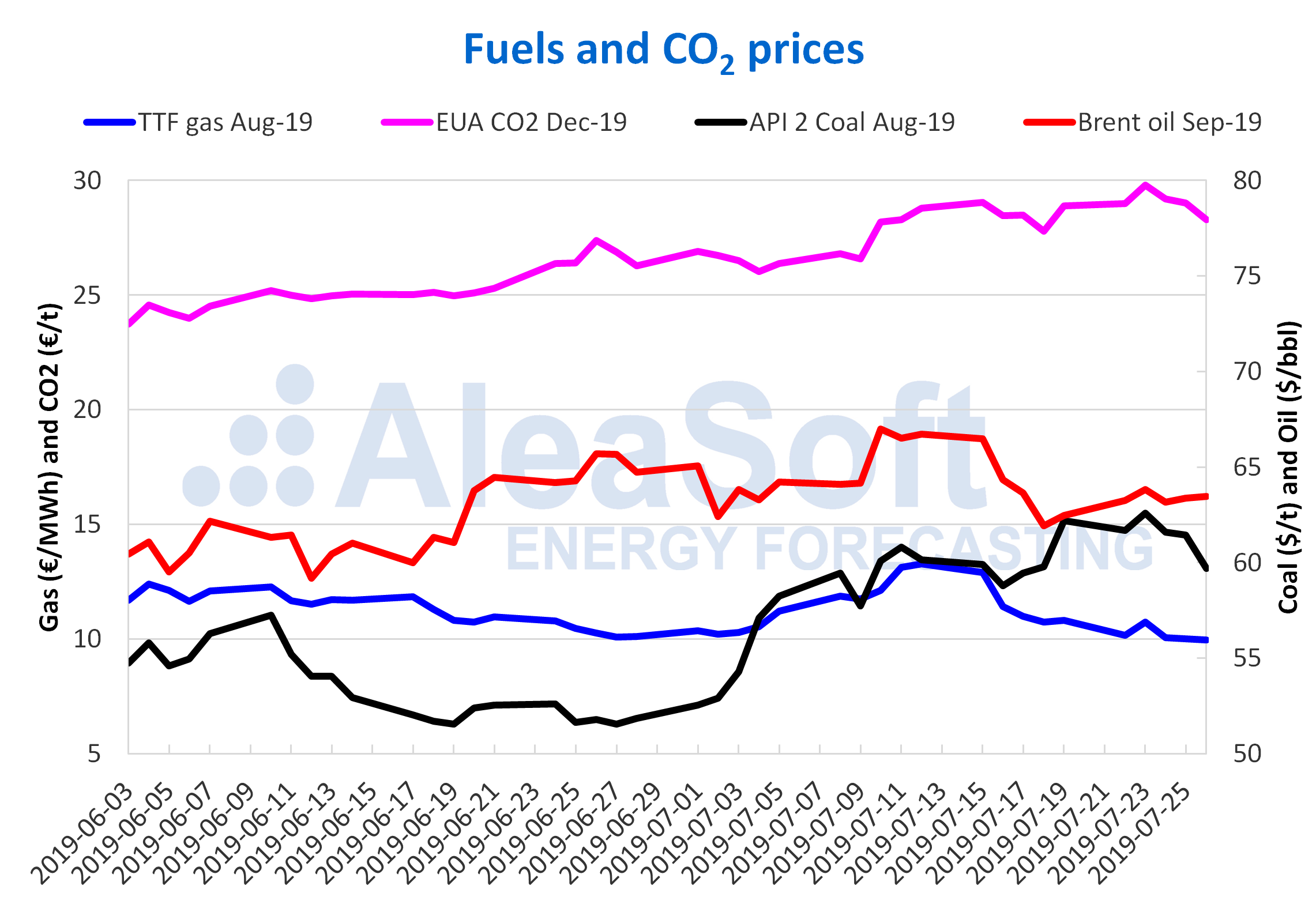 The TTF gas futures in the ICE market for the month of August settled this Friday, July 26, at 9.96 €/MWh, reaching the historical low of recent years. The prices of TTF gas futures continued their downward trend, settling on Tuesday, July 23, at 10.75 €/MWh with an increase of 5.8% compared to the settlement price on Monday, July 22, 10.16 €/MWh and despite the heat wave that hit Europe last week.

The API 2 coal futures prices in the ICE market for the month of August were traded with a downward trend at 59.70 $/t on Friday, July 26. There was a decrease in the price of 4.6% compared to the 62.60 $/t recorded on Tuesday, July 23, the highest price quoted during the past week, despite the increase in prices due to the heat wave of last week and taking into account a forecasted stabilization in the temperatures of Europe during this week.

The CO2 emission rights futures prices in the EEX market for the December 2019 reference contract settled at 28.30 €/t on Friday, July 26, in the face of forecasts with cooler temperatures for this week and after settling on Tuesday, July 23, at 29.80 €/t, with a 7.3% increase over the lowest price quoted in the last two weeks, registered on Thursday, July 18, at 27.78 €/t.

The prices behaviour in the main electricity markets of the European continent during this last week, from July 22 to 28, was clearly influenced by the temperature peaks during the heat wave. The temperature increase was more noticeable in the centre and west of the continent and somewhat less on the Mediterranean coast. The EPEX SPOT markets in Germany, France, Belgium and the Netherlands continued to be very clustered during the week and registered the highest prices between Wednesday and Friday, around 51 €/MWh, coinciding with the temperature peaks. For these four markets, prices increased around 7% compared to the previous week. 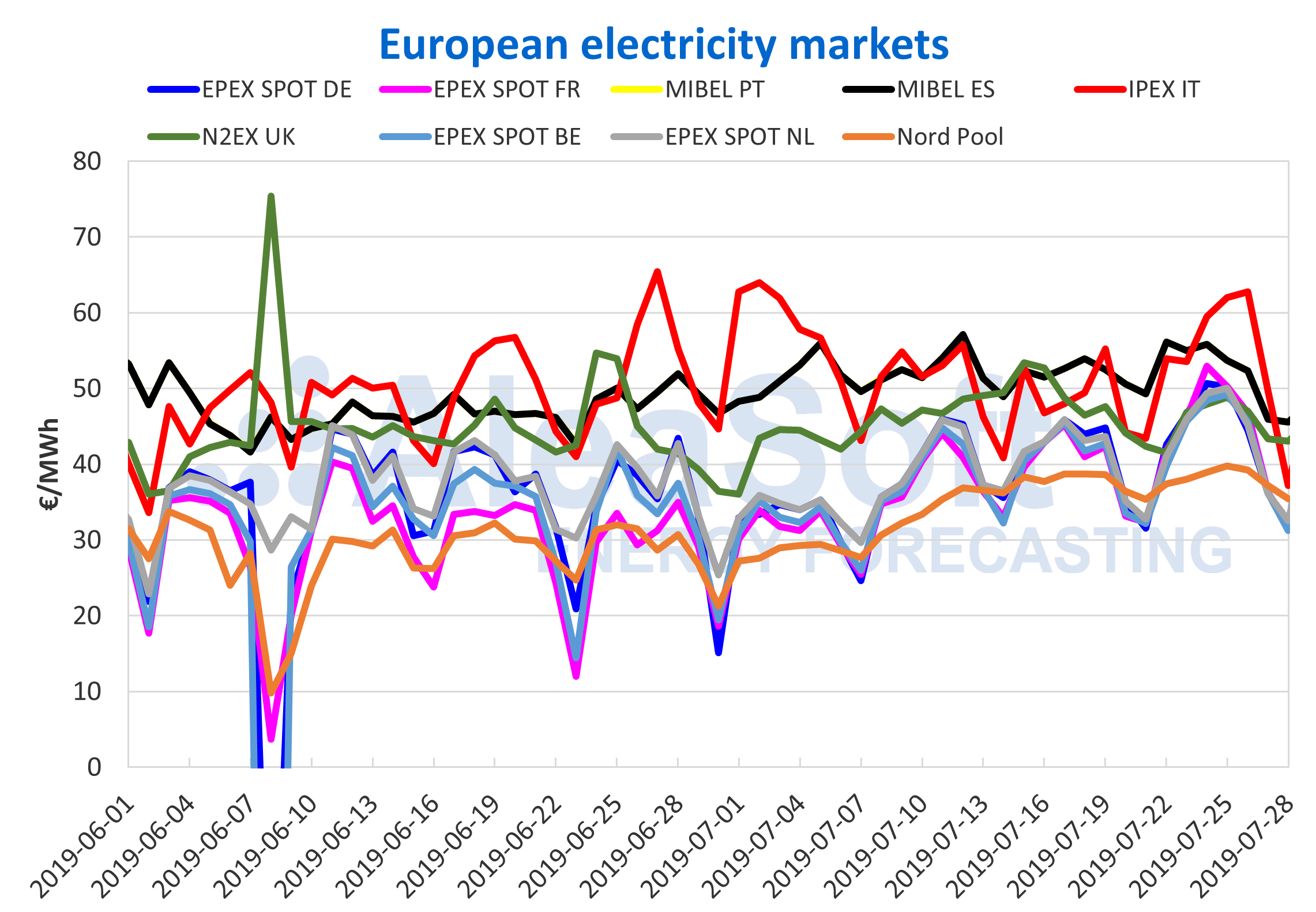 The Nord Pool market of the Nordic countries continued to record the lowest prices in the continent with an average price during the week of 38.02 €/MWh and an increase of 0.8%. The price of the British N2EX market fell 5.0% this week and remained close to that of the EPEX SPOT markets, except during the weekend that registered slightly higher values.

The markets of the south of the continent, the MIBEL market of Spain and Portugal and the IPEX market of Italy, registered clearly higher prices, especially the Italian market that reached close to 63 €/MWh on Friday. Both markets registered price increases compared to the previous week.

During the course of this week, temperatures are expected to return to their usual levels for this time of year. If, in addition, nuclear energy availability in France increases as expected thanks to improved conditions for cooling, the pressure on electricity market prices should be downward.

The European electricity futures prices for the fourth quarter of 2019 ended last week with lower values ​​than those of the previous week, when, as already mentioned there was a downward trend in the prices of electricity futures at the end of the week. However, this time the price decline is widespread. Only the value of the futures of Italy in the MTE market operated by GME remains still. Even the futures of the Nordic countries, which were the only ones that registered increases last week, fell this week, although not enough to compensate the previous increase. In general, all the markets in which the price varied, was to leave a negative difference between -0.8% and -5.2%. The latter was the case of UK futures in the ICE market, which is, once again, the country with the steepest decline. UK futures for the next quarter in this market ended last week with a price of 52.36 £/MWh and in the EEX market the value of this same product settled last Friday, July 26, at 52.42 £/MWh. These figures show a decrease of 5.63 £/MWh and 5.75 £/MWh for the ICE and EEX markets of UK, respectively, in just two weeks. Given this market behaviour, someone having reliable spot price forecasts could recognise if it is an opportunity.

On the other hand, futures for the calendar year 2020 had a less relevant behaviour. Italy’s futures in the MTE market are still paralysed for this product as well. In most European markets there were slight declines, between 0.3% and 2.2%. Only the futures of Spain in the EEX market went in the opposite direction, which were the only ones that registered a price rise, although of just 0.2%. 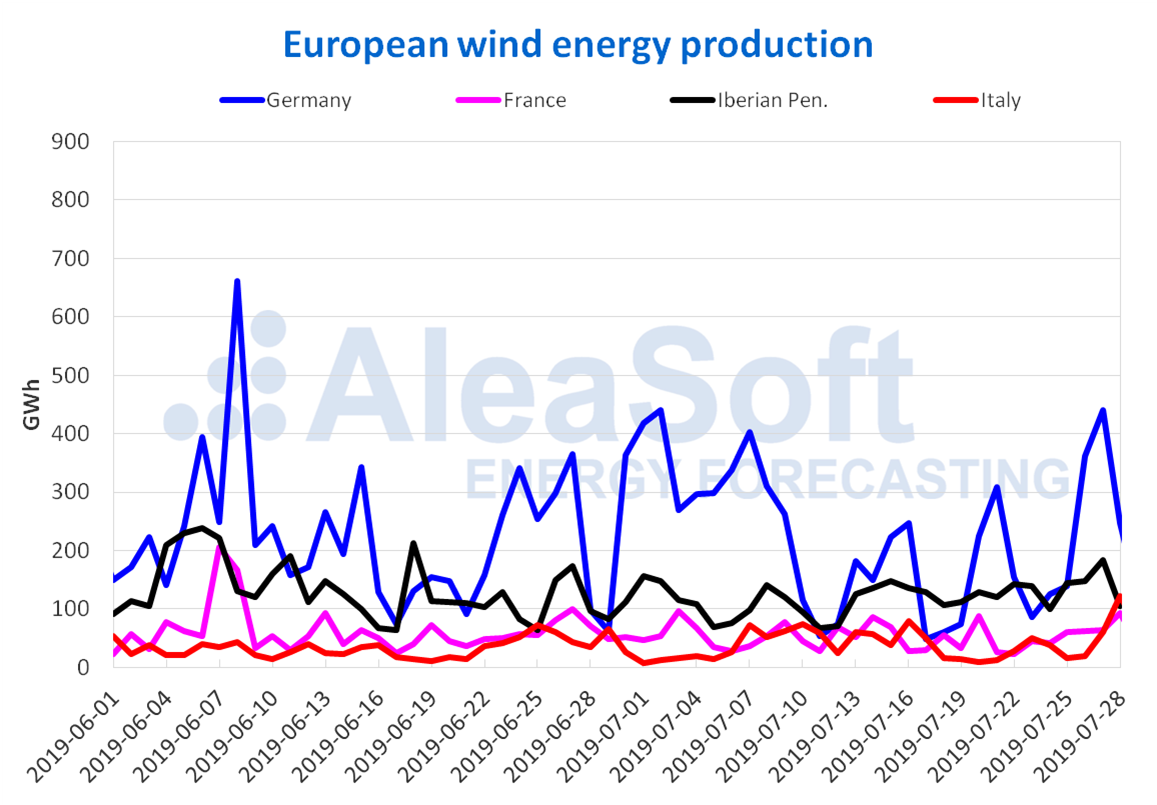 In the case of the solar energy production, which includes both photovoltaic and solar thermal technologies, generation with this renewable resource in Germany also increased by 12% and in Italy by 4.3% during last week. In contrast, there was a 6.4% drop in Spain. This week solar energy production is expected to lower in Germany and Italy, and, on the other hand, to slightly recover in Spain. 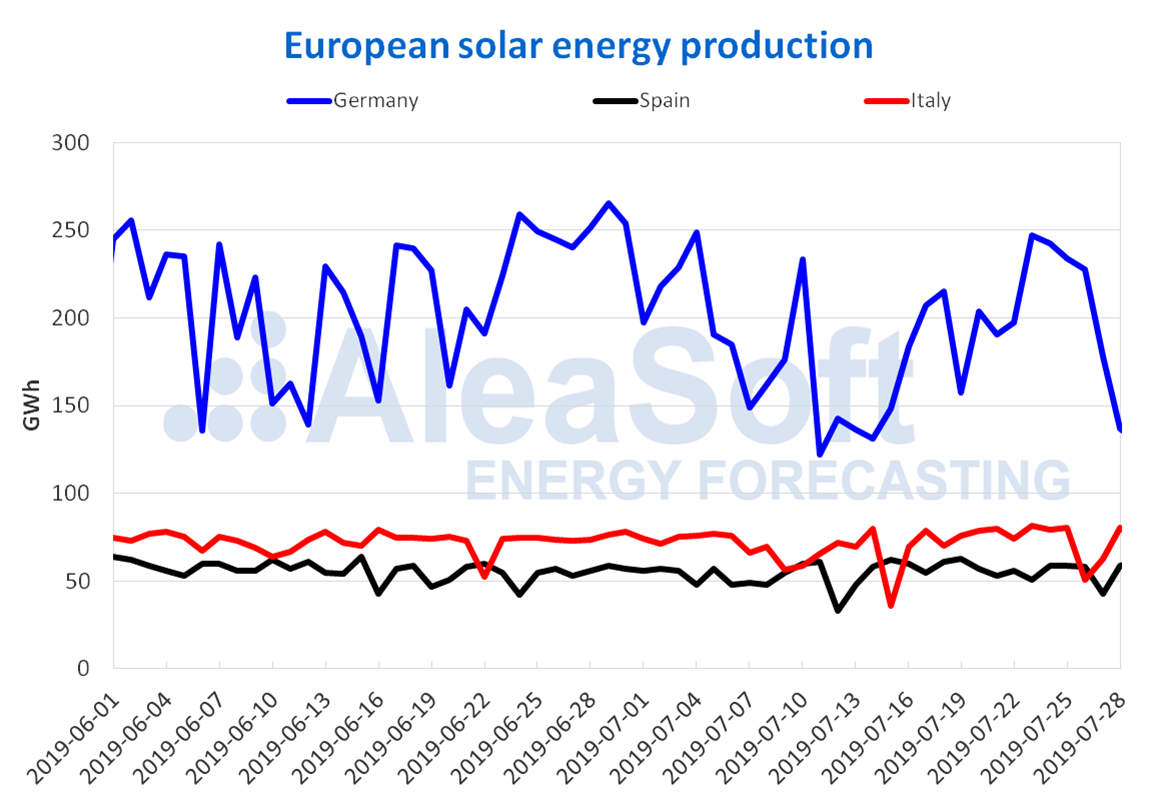