AleaSoft, May 11, 2020. Europe’s electricity demand started to recover in the markets where the deconfinement began. In addition to this, in the first week of May the wind energy production fell on the continent, causing an increase in prices, although they continued below €30/MWh. The Brent oil also showed signs of recovery as the measures taken to curb the COVID‑19 began to relax. On the other hand, the gas remains at record lows.

The solar energy production during the past week, ended yesterday, Sunday, May 10, was higher than the previous week in most European markets. In the French market, the production increased by 35%, while in the German market it grew by 32% and in the Italian by 13%. On the contrary, in the Iberian Peninsula there was a decrease of 1.2%.

During the first 10 days of May, the production with this technology was higher in all the markets analysed at AleaSoft compared to the same days of 2019. The greatest variation was in the Spanish market with a year‑on‑year increase of 57%. The increase of 39% in Italy was also considerable. In the rest of the markets the variation was between 30% and 11%. 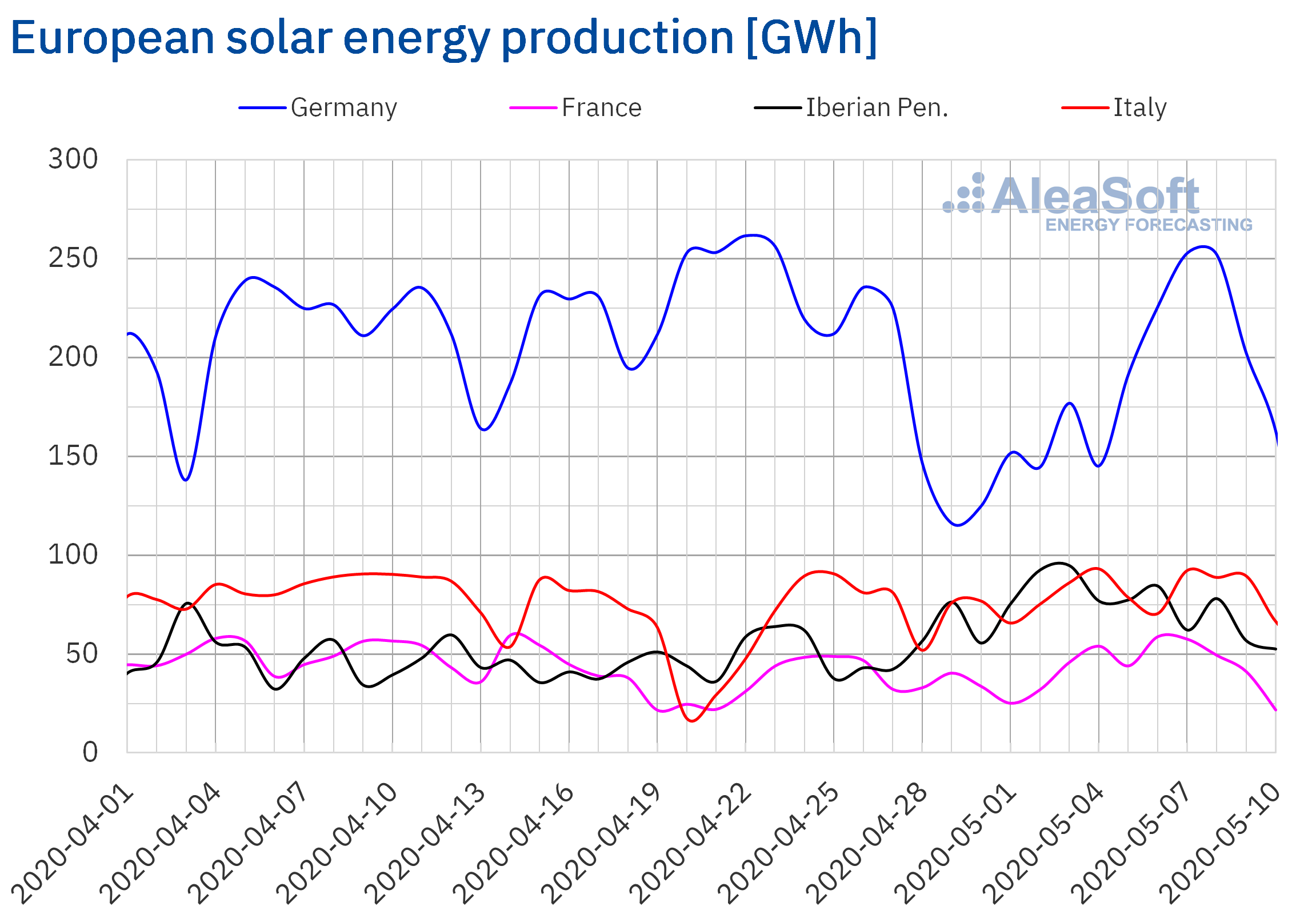 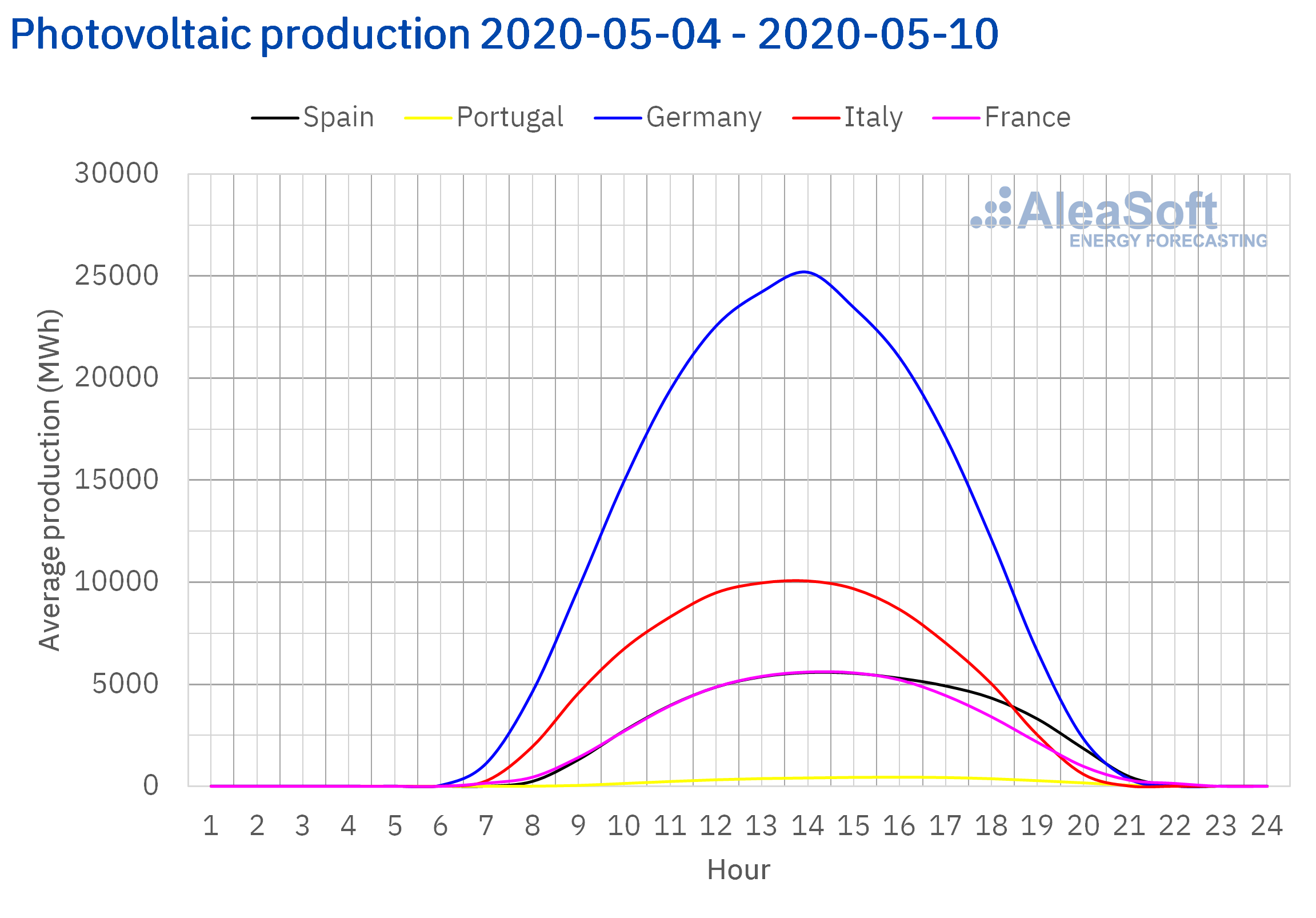 The wind energy production decreased last week in all the markets analysed at AleaSoft. In the observatory of the MIBEL market of Spain, a strong decrease can be observed for this market, which was one of those that presented large variations at the end of the week with a reduction in production of around 33%. 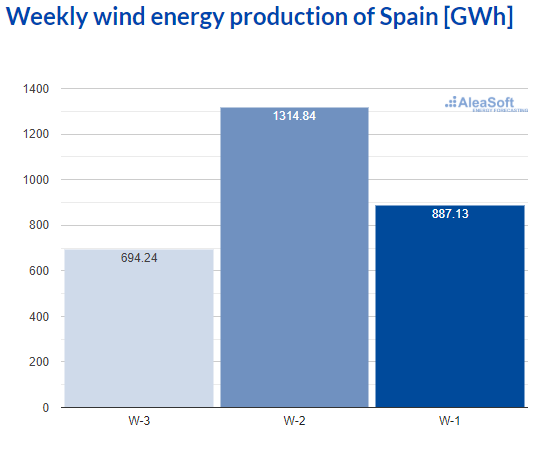 However, the market with the greatest variation was the French, with a decrease in production of 47%. The 36% decrease in the German market, which was the largest of all markets in absolute terms, should be highlighted.

The wind energy production was also lower so far in May compared to the same days of May 2019, in most European markets. The largest reduction was in the German market, where the production was 36% lower. In the rest of the markets analysed at AleaSoft, the production with this technology decreased between 17% and 21%.

For this week the AleaSoft’s wind energy production forecasting indicates increases in production in the German and French markets. 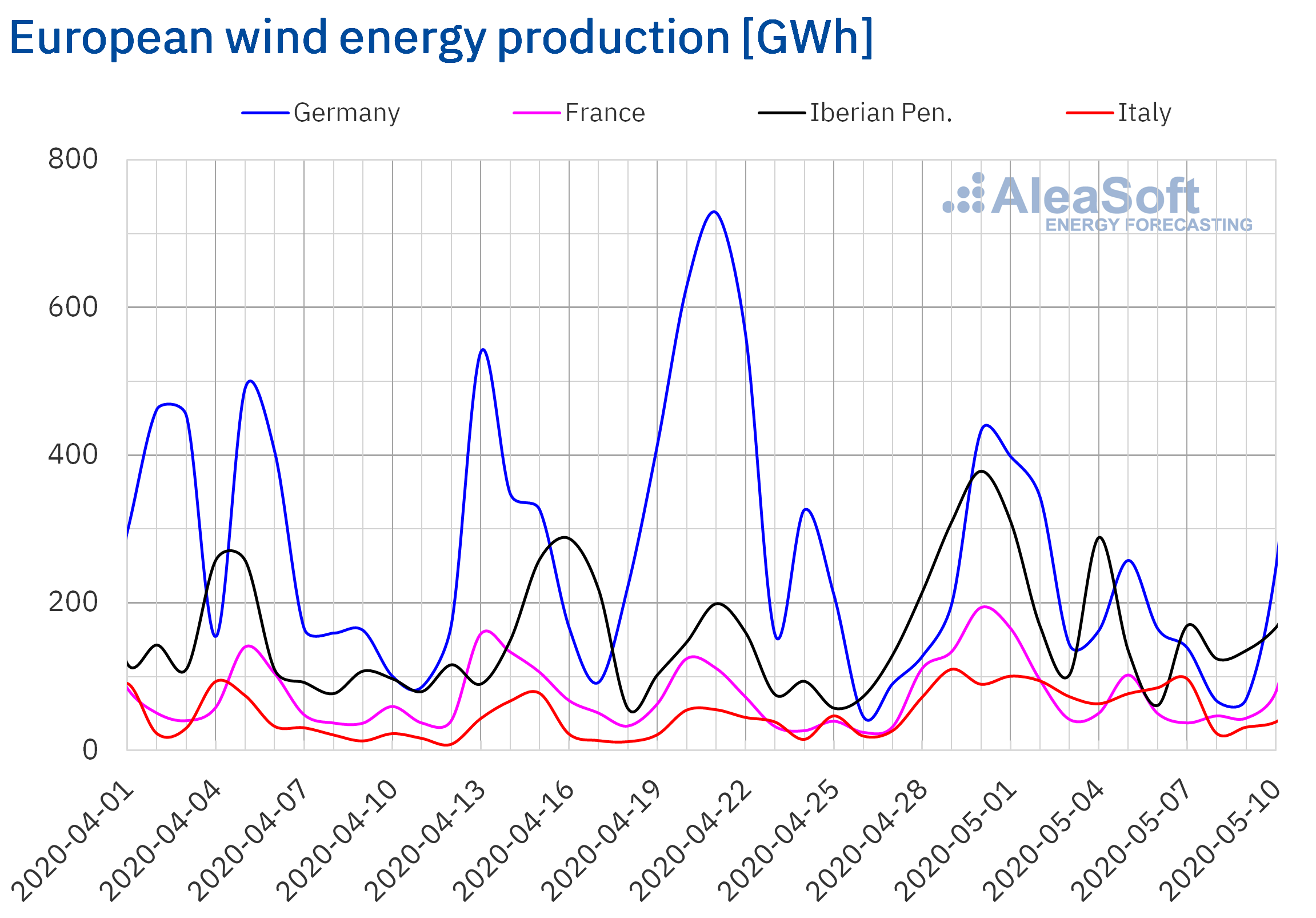 The electricity demand behaved unevenly in the European markets during the past week compared to that of April 27. The effect of the de‑escalation of the confinement began to be felt in Italy and together with the effect of labour on the holiday of May 1, made the demand to be increased by 12% in this market. In Spain, the confinement measures are also being eased and it was one of the reasons why the demand rose 3.1% last week. The 3.1 °C rise in average temperatures and the holiday of May 8 in Great Britain influenced the 9.9% drop in this country. Similarly, the influence of the 2.0 °C rise and the celebration of the Victory Day on May 8, contributed to the 2.5% decrease in France. In the markets of Belgium and Germany the increases were 5.1% and 2.1%, with the holiday of May 1 of the previous week being the main cause of this rise. On the other hand, in Portugal there was a drop of 1.1% and in the Netherlands the drop was less than 0.1%.

At the AleaSoft’s electricity demand observatories it is possible to analyse the variations that the demand registered in the recent weeks.

In the coming weeks, the AleaSoft’s electricity demand forecasting indicates that the demand will recover as progress is made in the deconfinement in the different markets. 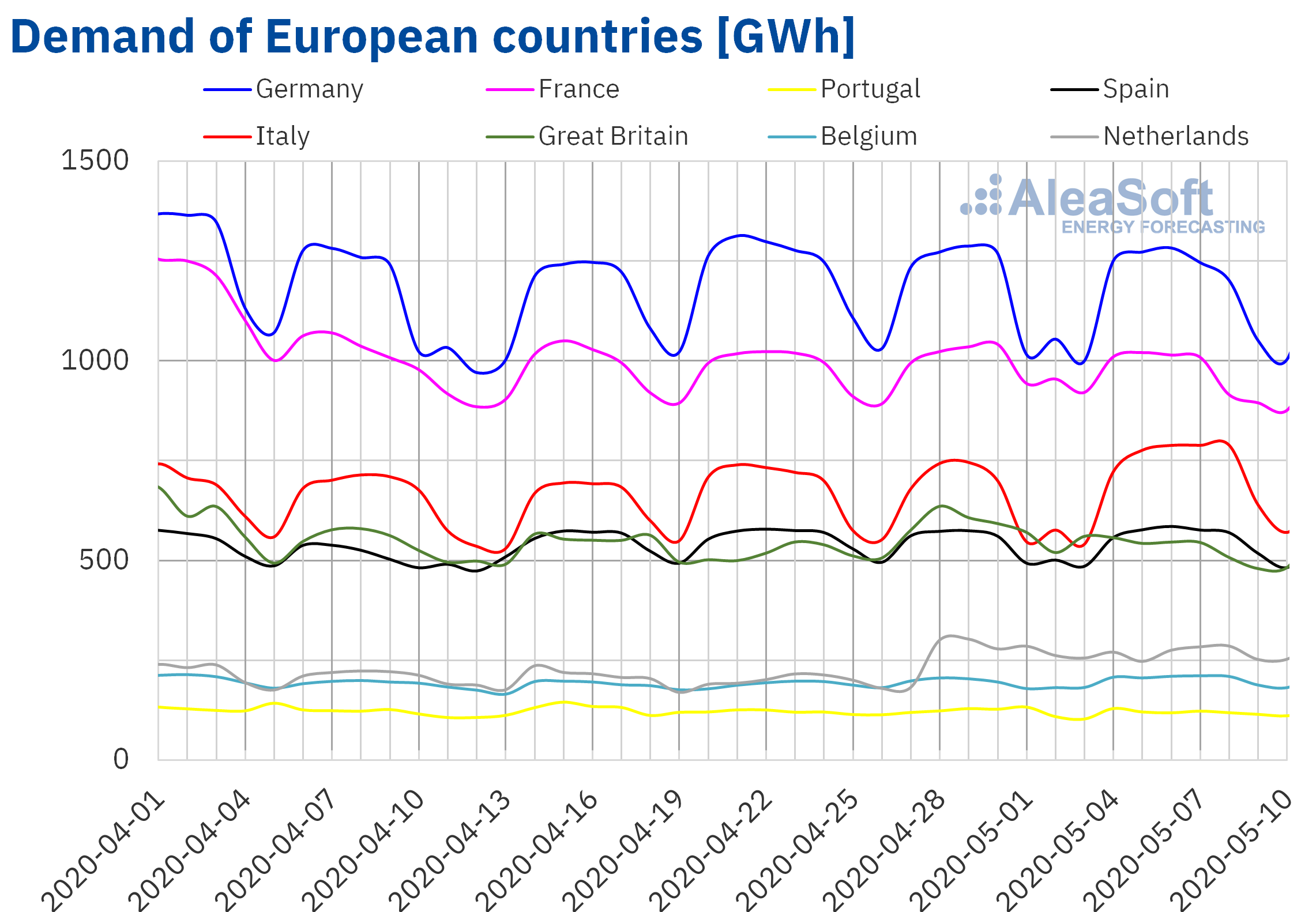 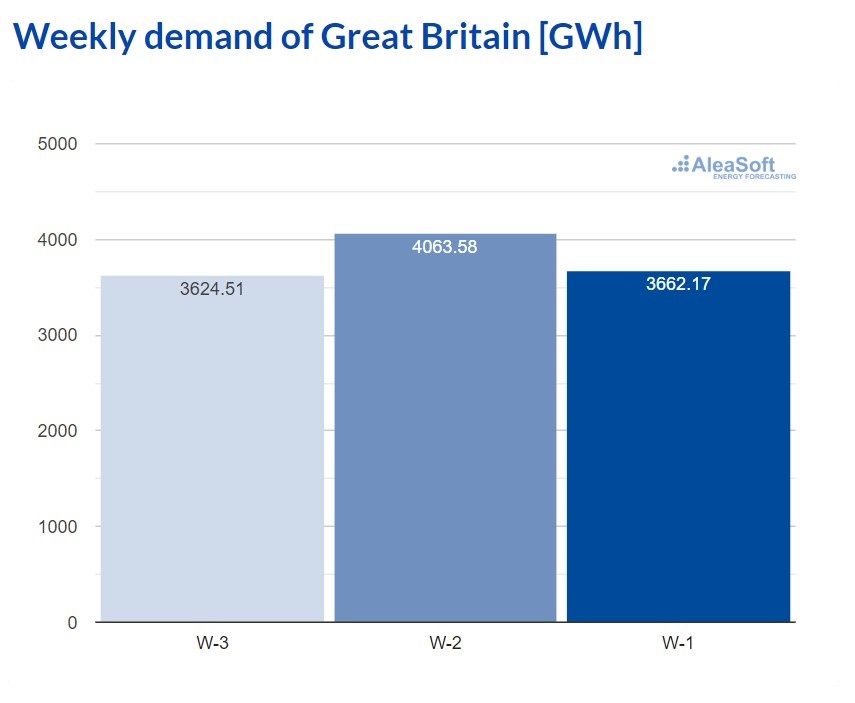 Last week the prices of the European electricity markets increased compared to those registered the previous week, with the exception of the N2EX market of Great Britain, which registered a decrease of 5.0%. The market with the highest price rise, of 49%, was the MIBEL market of Spain and Portugal, followed by the EPEX SPOT market of France with an increase of 41%. While the markets where the prices rose the least were the EPEX SPOT of the Netherlands and Nord Pool of the Nordic countries, with increases of 7.6% and 12% respectively.

On the other hand, during the past week there were no negative prices in the analysed electricity markets. But in the early hours of today, May 11, negative hourly prices occurred in the N2EX and EPEX SPOT markets of France and Belgium. The lowest prices are those of the hour 5, of ‑€2.24/MWh in the French market, of ‑€2.29/MWh in the British market and of ‑€4.98/MWh in the Belgian market. Despite this, the daily average prices for May 11 are positive in all markets. 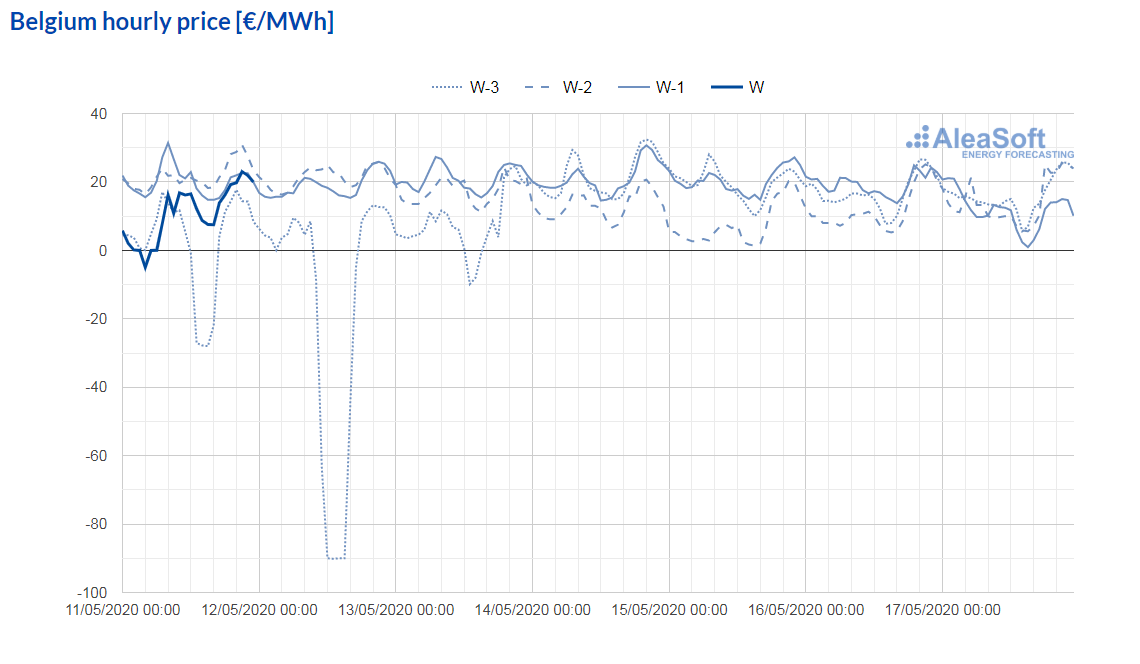 The price increases registered last week are mainly due to a general decline in wind energy production in Europe. In the case of Great Britain, there was a 9.9% decrease in demand that favoured the decrease in prices in this market. 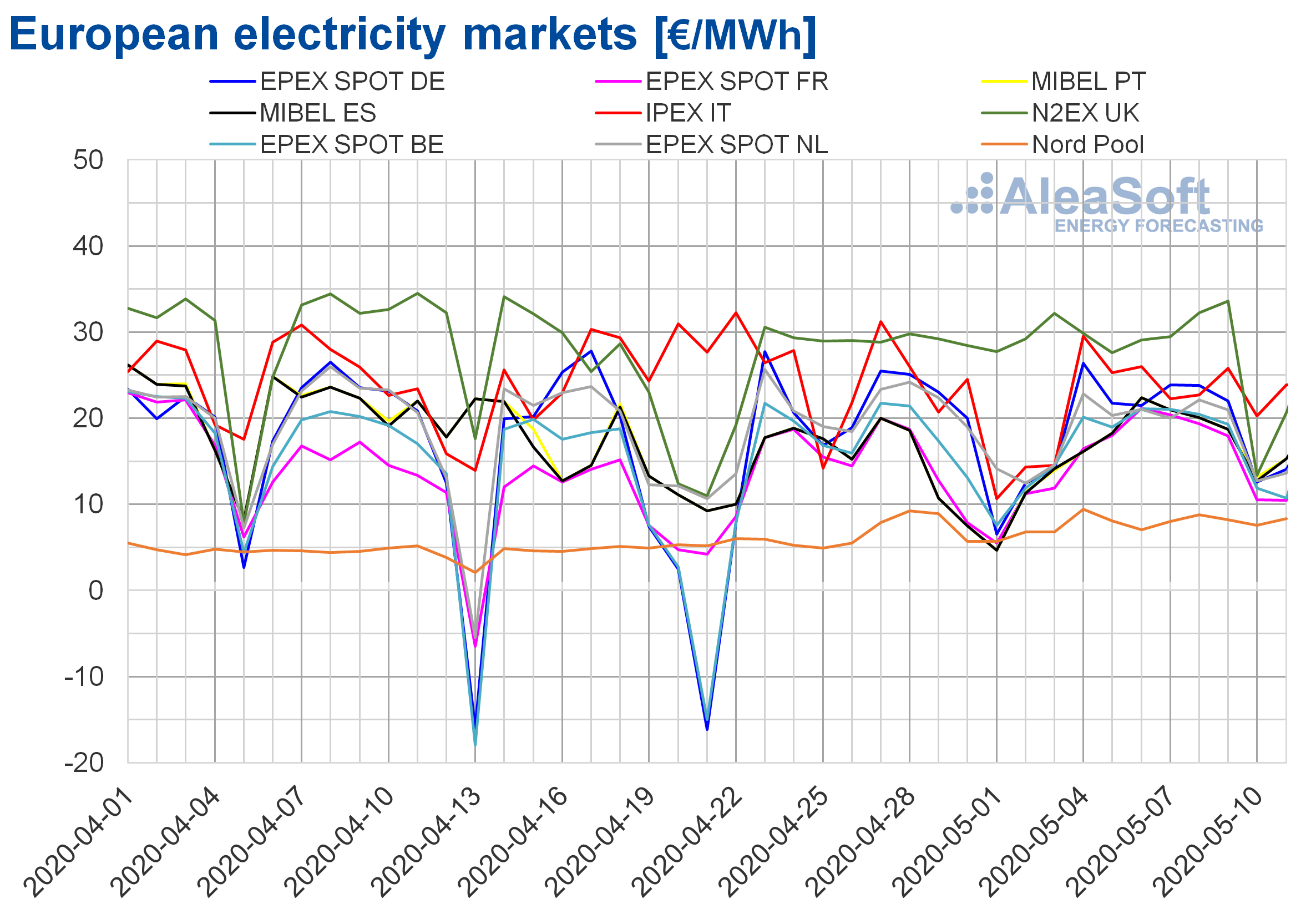 The AleaSoft‘s price forecasting indicates that this week the prices will decrease in most of the analysed European markets as an increase in wind energy production is expected in countries such as Germany and France.

During the last week of May 4, the electricity futures prices for the third quarter of 2020 had heterogeneous behaviours in the markets analysed at AleaSoft. The EEX market of Germany, Spain, Italy and Great Britain and the OMIP market of Spain and Portugal registered drops. The greatest drop was registered by the EEX market of Spain, while in the same market, Germany registered the smallest drop, of just 0.1%, thus also being the market in which the price changed the least compared to the settlement of the previous week, on April 30. On the other hand, the markets EEX of France, ICE of Great Britain, Belgium, the Netherlands and the Nordic countries and NASDAQ of the Nordic countries, registered price increases during the past week.

The Brent oil futures for the month of July 2020 in the ICE market started last week with price increases and on Tuesday, May 5, they reached the maximum settlement price of the week, of $30.97/bbl, a 36 % higher than that of the previous Tuesday. Although declines were registered on Wednesday and Thursday, the prices recovered on Friday to repeat the settlement price of Tuesday. On average, during the last week the prices were 21% higher than those of the same days of the previous week.

The expectations of increased demand in some countries as restrictions imposed to curb the spread of the COVID‑19 become less strict allowed the recovery in prices of last week. The start in May of the reductions in production agreed by OPEC+ and the decrease in production in the United States also contributed to this recovery. However, the reserve levels remain high and the cuts in oil production are still not enough to offset the decline in demand, hindering the price recovery.

Regarding the TTF gas in the spot market, it reached the maximum index price of last week, of €5.49/MWh, on Tuesday, May 5. Subsequently, the prices fell to register a new record low of €5.30/MWh for Friday, Saturday and Sunday, which was lower than the lows registered in October 2009. Today, Monday, May 11, the price recovered to €5.47/MWh, but this price is still €0.01/MWh lower than that of the previous Monday.

Regarding the CO2 emission rights futures prices in the EEX market for the reference contract of December 2020, last week they remained below €20/t. The week’s minimum settlement price was reached on Wednesday, May 6. This was €19.00/t, 5.9% lower than that of Wednesday of the previous week and the lowest since April 3. In today’s session the prices continued below €20/t. 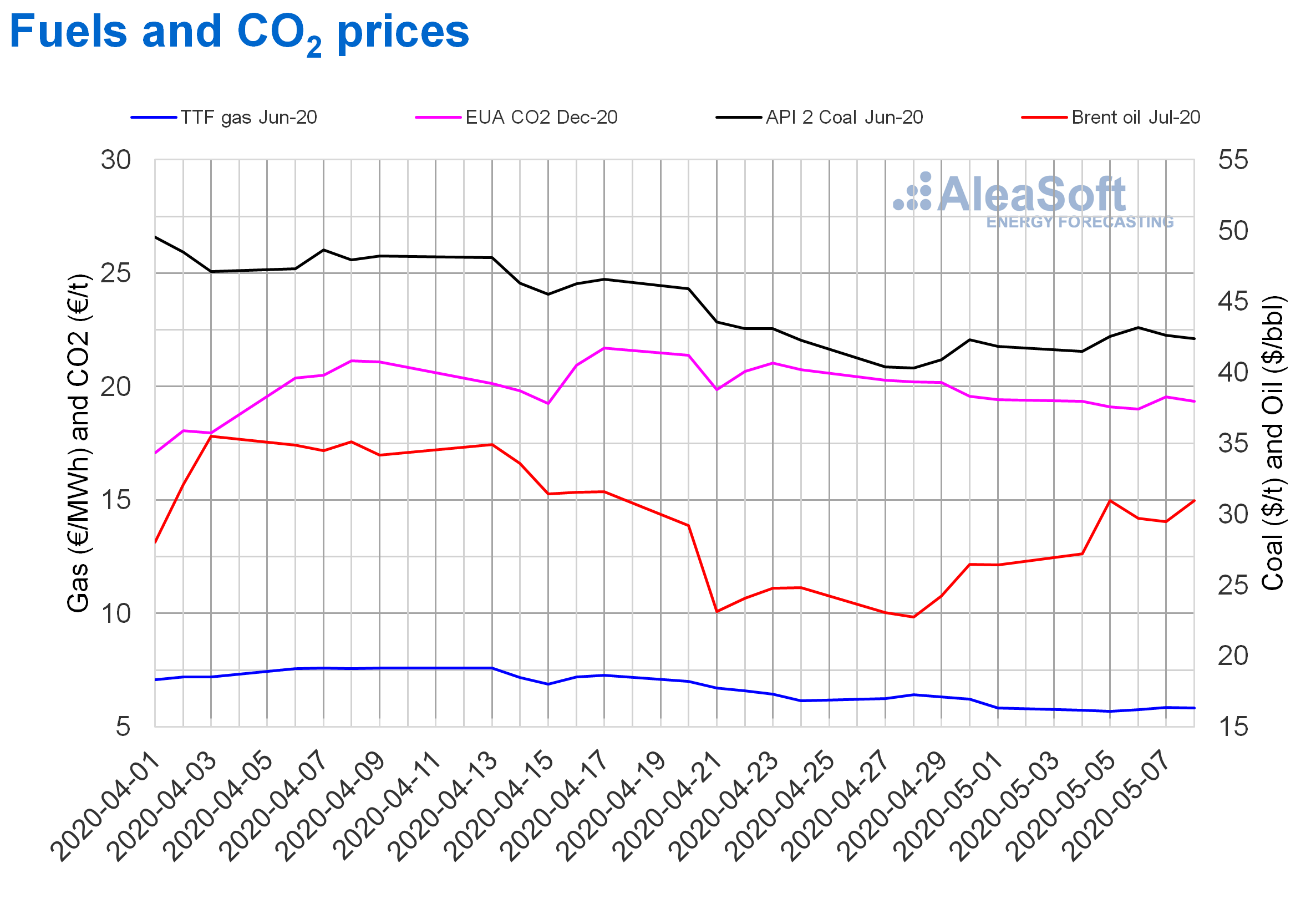 To analyse the evolution of the demand and the prices in the main European electricity markets, it is possible to consult the electricity markets observatory on the AleaSoft website. It is currently available for the MIBEL, EPEX SPOT, N2EX, IPEX and POLPX markets.