The European electricity markets begin May with prices below €30/MWh

AleaSoft, May 7, 2020. In the first days of May, the European electricity markets prices were below €30/MWh and it is expected that they will continue below this value next week. Italy’s demand increased after the confinement measures to curb the coronavirus began to relax. In the rest of the markets, the demand remains stable although it continues to fall in Great Britain. Gas prices continue to reach historical lows.

Balance of the month of April in the Spanish electricity market

The electricity demand of Mainland Spain fell by 17% year‑on‑year in April. The main cause of this decline was the drastic reduction in activities in all sectors due to the confinement to stop the spread of the COVID‑19. The average temperatures increased 1.1 °C. When correcting the effect of the temperature and the labour, the drop was 16.7%, according to REE data. It should be noted that last April the demand registered a monthly total of 16 191 GWh. Such a low value was not reached since April 2001. 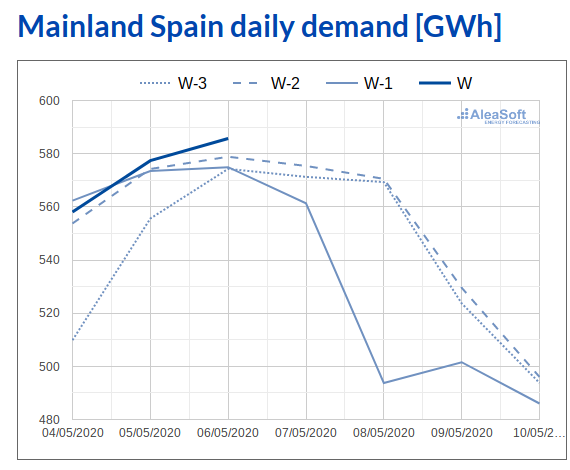 This April was a month in which the renewable energies occupied almost half of all the demand.

The wind energy production registered decreases compared to March and also compared to April of last year, of 37% and 20% respectively.

On the other hand, the hydroelectric energy production increased by 49% compared to that of the same month of last year, although it presented a slight decrease of 4.6% compared to March of this year.

The decrease in electricity demand in April compared to last March and April 2019 caused a decrease in generation with some technologies. The reduction in production with coal, of 54% compared to the same month of the previous year, is very notable. Likewise, the combined cycle gas turbines reduced their production, being in this April 39% lower than in April of last year. The nuclear energy production also fell during the past month as a result of the disconnection of the power grid of the unit 1 of the Almaraz Nuclear Power Plant on April 14 and the unit 1 of the Ascó Nuclear Power Plant on April 28. 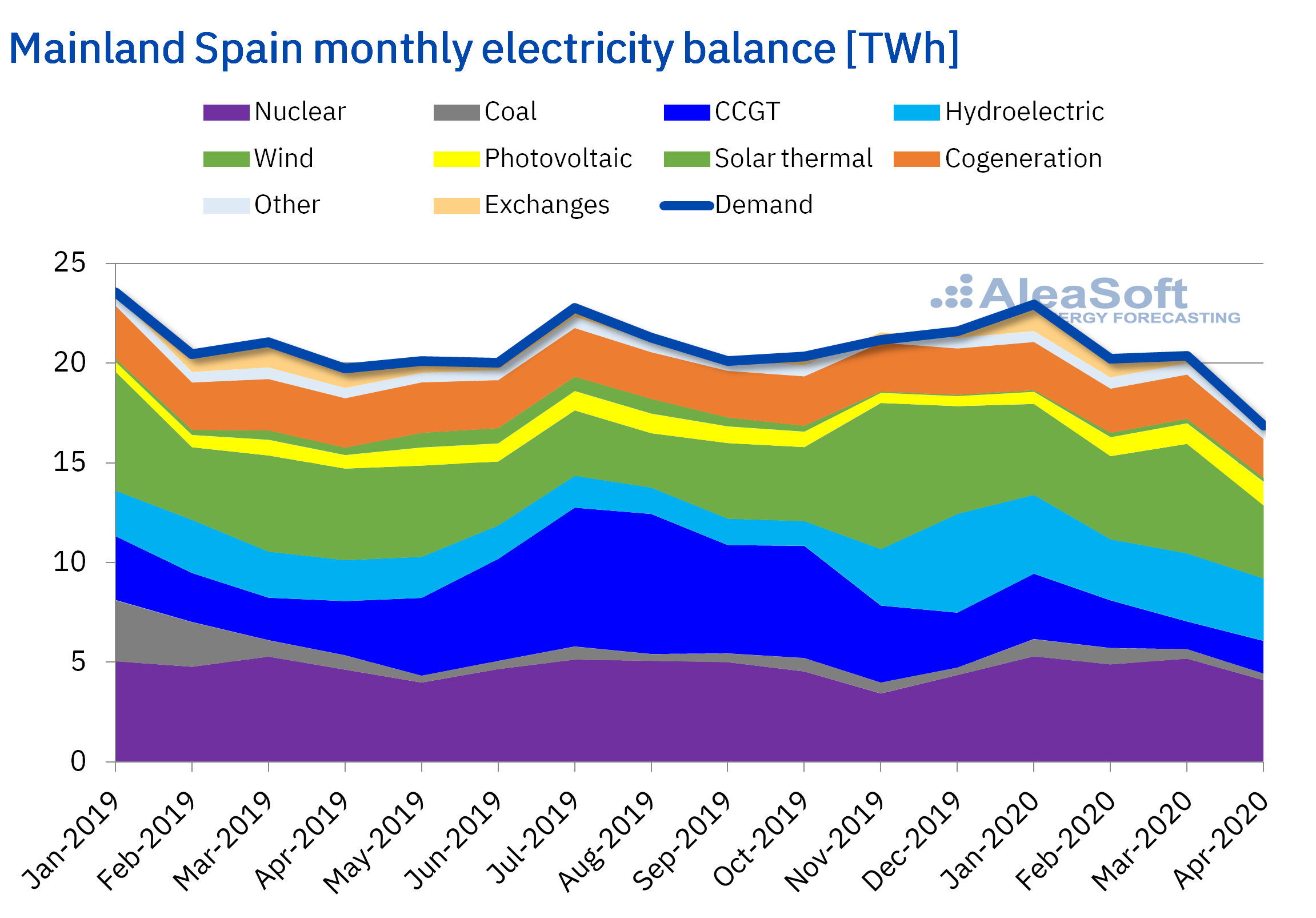 In April, the hydroelectric reserves rose 29% year‑on‑year and compared to the accumulated reserves in March 2020, they rose 15%.

As a result of these decreases, during April, daily prices of less than €10/MWh were registered four times, with the lowest daily price being that of April 30, of €7.50/MWh. While the maximum daily price, reached on April 1, was €26.20/MWh. 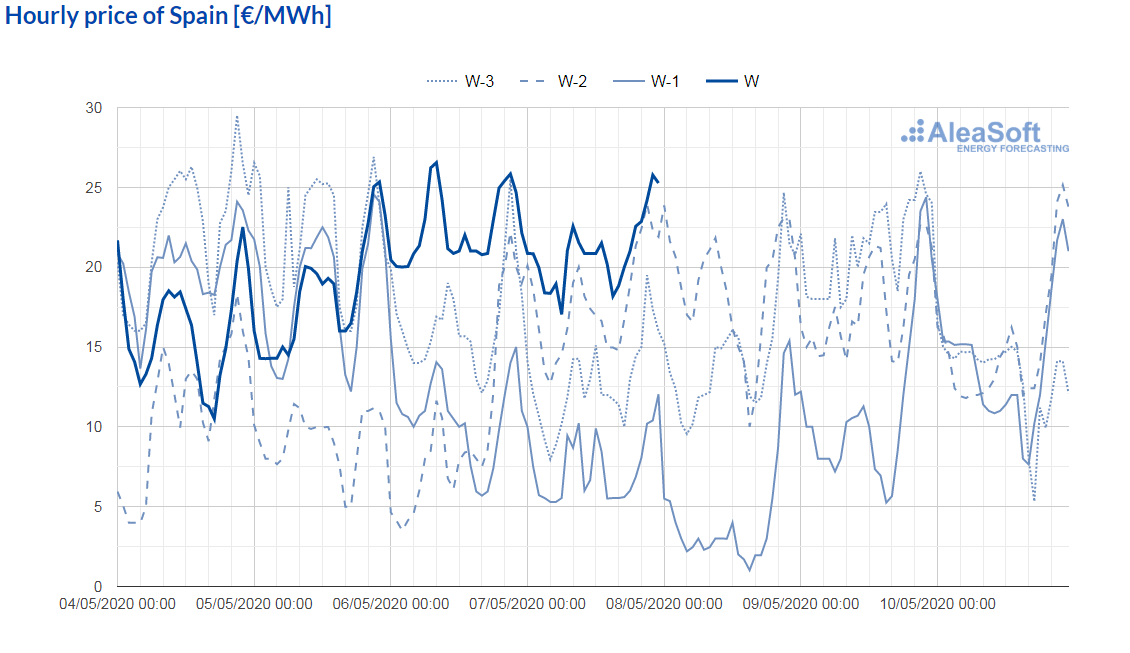 The solar energy production increased during the first three days of this week compared to the average of the last week in all the markets analysed at AleaSoft. The highest growth in production with this technology was registered in the French market, where it was 51% higher. The German market also stands out with an increase of 21%. In the rest of the markets the variation was between 9% and 11%.

During the first six days of May, the solar energy production was higher than that registered in the same days of 2019 in all European markets. The largest variations were 47% and 42% in the markets of Spain and Italy.

For this week the analysis carried out at AleaSoft indicates that the solar energy production will increase in Germany compared to last week. On the contrary, a reduction in production is expected in Spain and Italy. 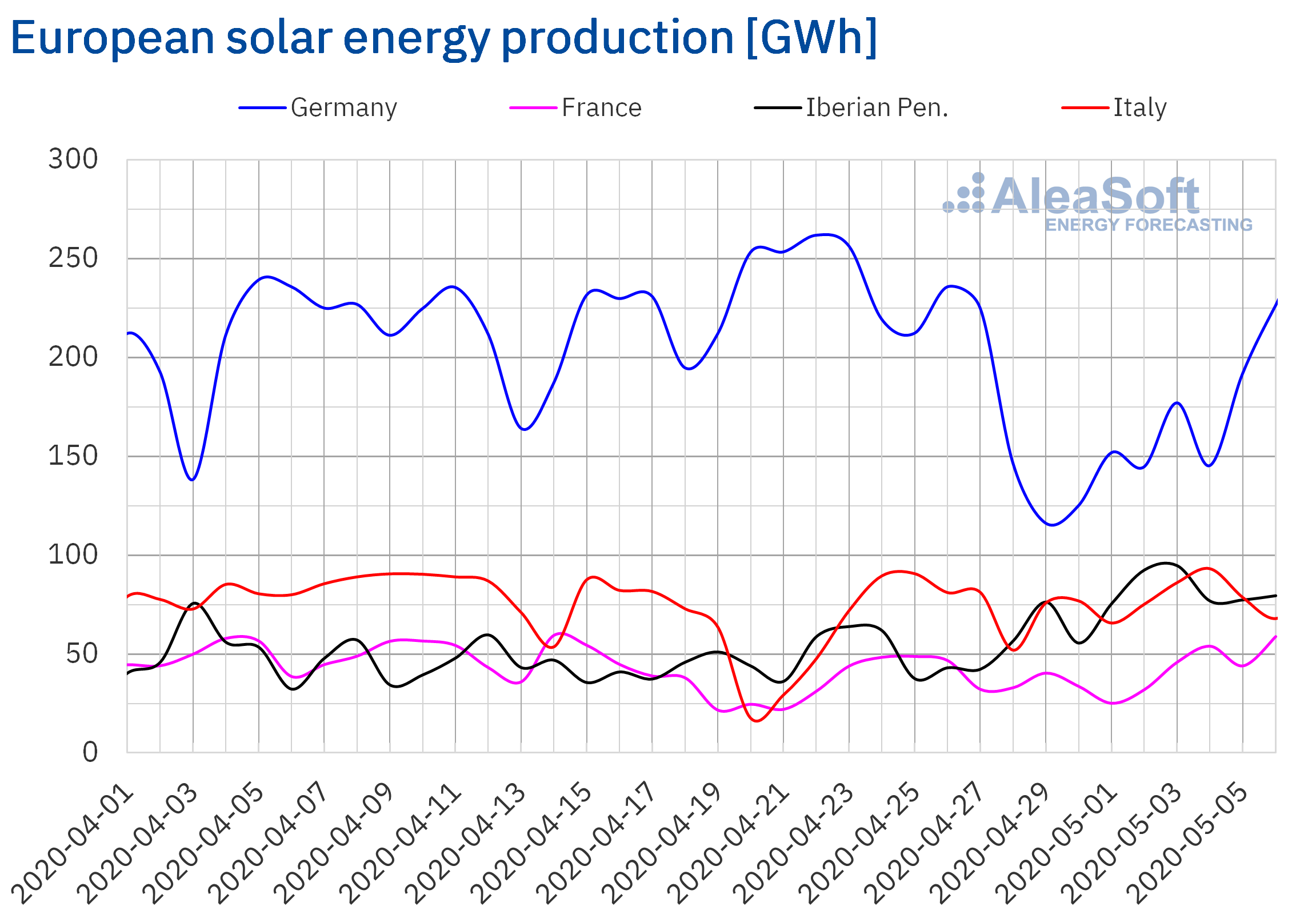 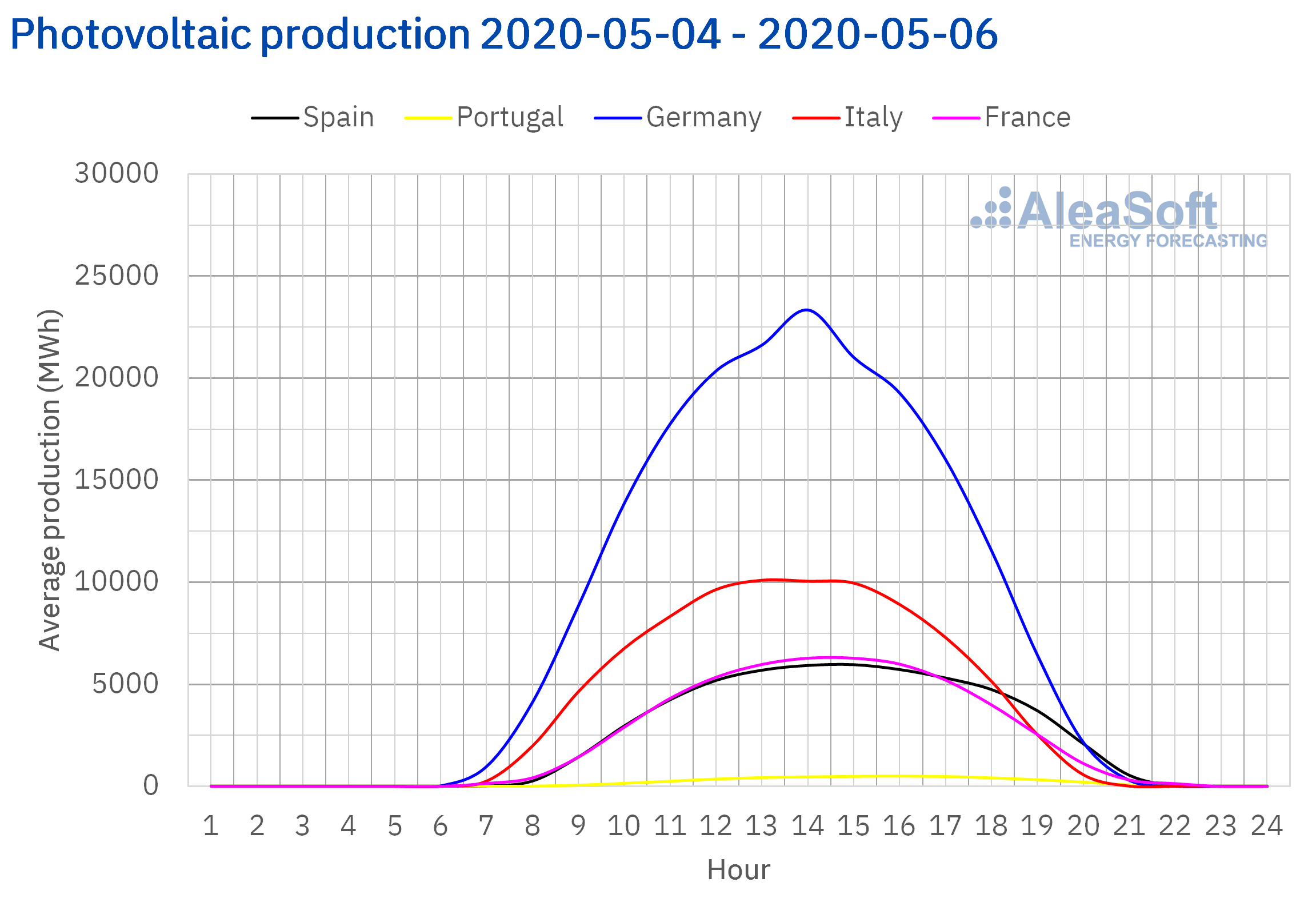 On the contrary, the wind energy production during the first three days of this week was lower than last week’s average in all the markets analysed at AleaSoft. The smallest variations were in Italy and Portugal with ‑7.3% and ‑10% respectively, while in France, Spain and Germany the decrease was between 39% and 21%.

The production with this technology during the first days of May, compared to the same period of 2019, was highest in Italy, France and the Iberian Peninsula. In the Portuguese market there was an increase of 59% while in Italy and France it was 35% and 28% respectively. The exception was the German market, which had a year‑on‑year decrease in production with this technology of close to 29% in the first six days of this month.

For this week, the analysis of AleaSoft indicates that the total wind energy production of the week will end up being lower than that of last week in all the markets analysed at AleaSoft. 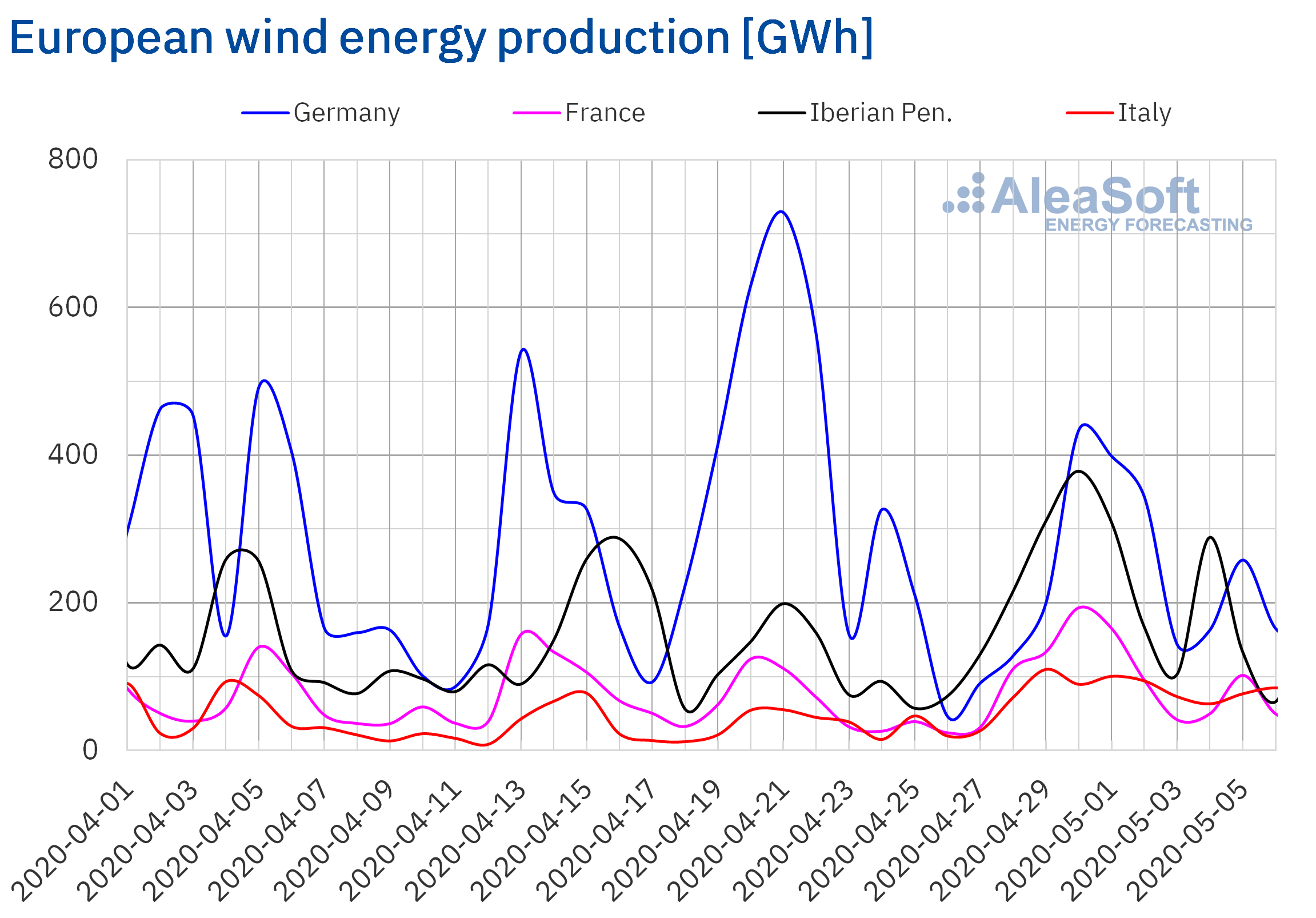 In the first three days of this week, the electricity demand of the European markets had little change compared to the same period of the week of April 27. The average temperatures during this period were less cold in most of the analysed markets, but there were decreases in Germany, Belgium and the Netherlands. The fact that the first phase of the confinement de‑escalation began this week in Spain and Italy was mainly reflected in the demand of the latter. In the first case, the demand rose slightly 0.6%, while in the second it recovered 5.5%. There were five countries where the variation was below 1%: Portugal, France, Germany, Spain and the Netherlands, being almost null in the first three. On the other hand, Belgium’s demand saw a recovery of 2.6%. In Great Britain the decreasing trend continues and a 9.5% drop was registered.

The AleaSoft’s electricity demand observatories are tools that allow analysing the evolution of the demand in the European markets, both during the week and in previous weeks.

According to the demand forecasting carried out at AleaSoft, the behaviour at the end of the week will remain similar to that analysed for the first three days in general, although the effect of the holiday of May 1 of last week will lead the demand for this week to be higher in some markets. 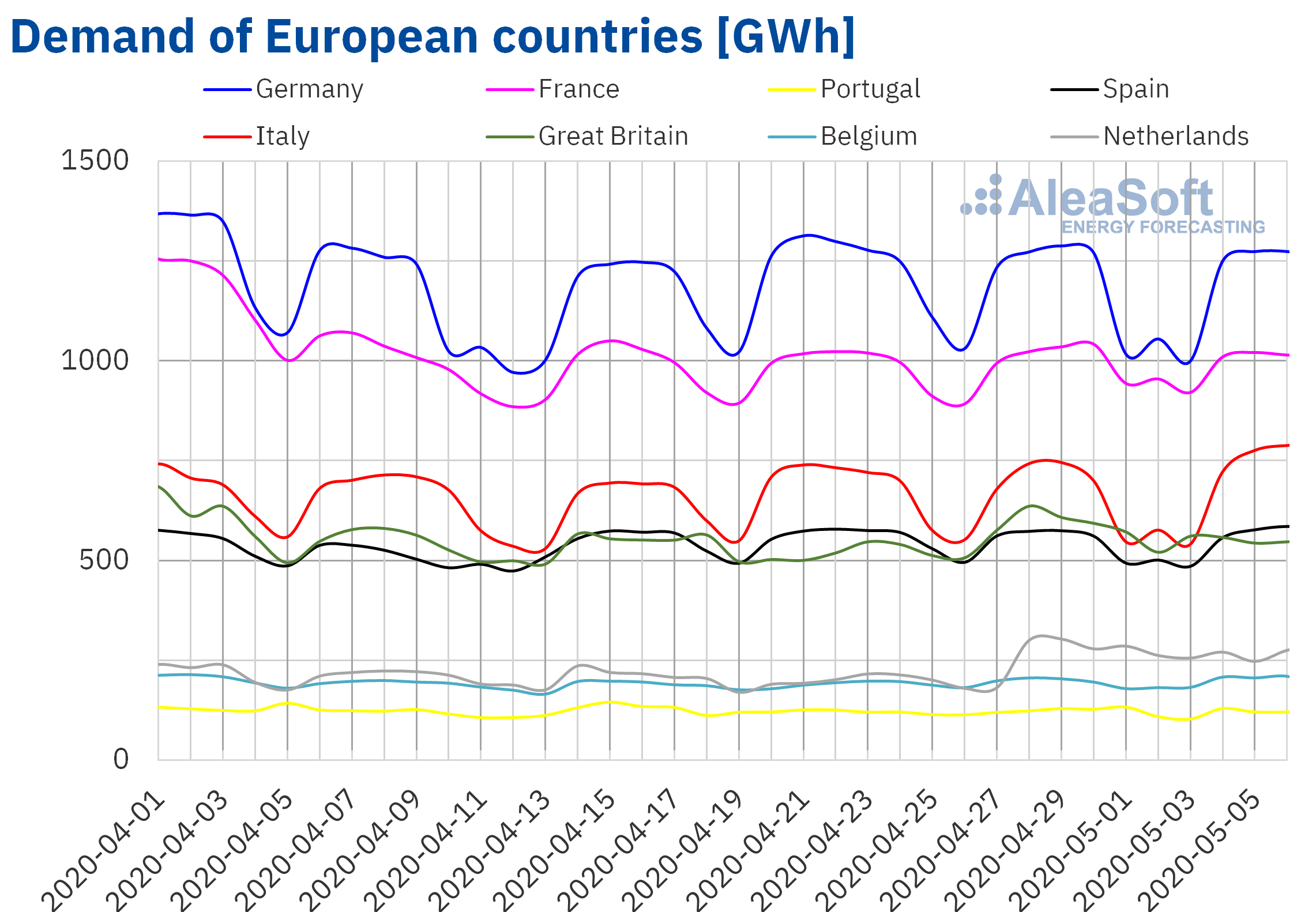 The first four days of the week of May 4, the prices increased in most European electricity markets compared to those registered the same days of last week. The exceptions were the N2EX market of Great Britain and the EPEX SPOT market of Germany and the Netherlands, with declines of 0.1%, 0.2% and 5.2%, respectively. On the other hand, the highest price increase, of 37%, occurred in the MIBEL market of Spain and Portugal. While the smallest rise was that of the IPEX market of Italy, of 0.6%. In the rest of the markets, the price increases were between 2.6% of the Nord Pool market of the Nordic countries and 28% of the EPEX SPOT of France.

Despite the variations registered during the first four days of this week, the prices continued with averages below €30/MWh. The market with the lowest average price so far this week, of €8.14/MWh, was the Nord Pool. While the market with the highest average, of €29.02/MWh, was the British, followed by the Italian and German markets, with €25.77/MWh and €23.35/MWh respectively. The rest of the markets registered quite similar prices, between €19.00/MWh of France and €21.05/MWh of the Netherlands. 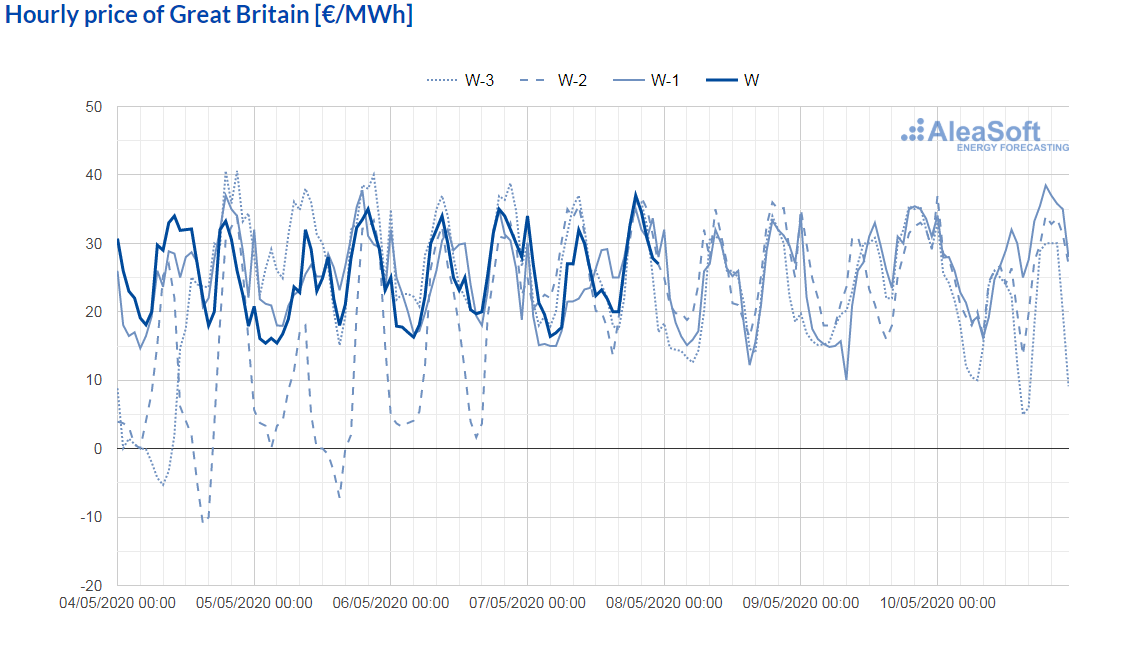 The fall in wind energy production in some European countries and a slight increase in the electricity demand in most markets allowed the price increases registered during the first days of this week. 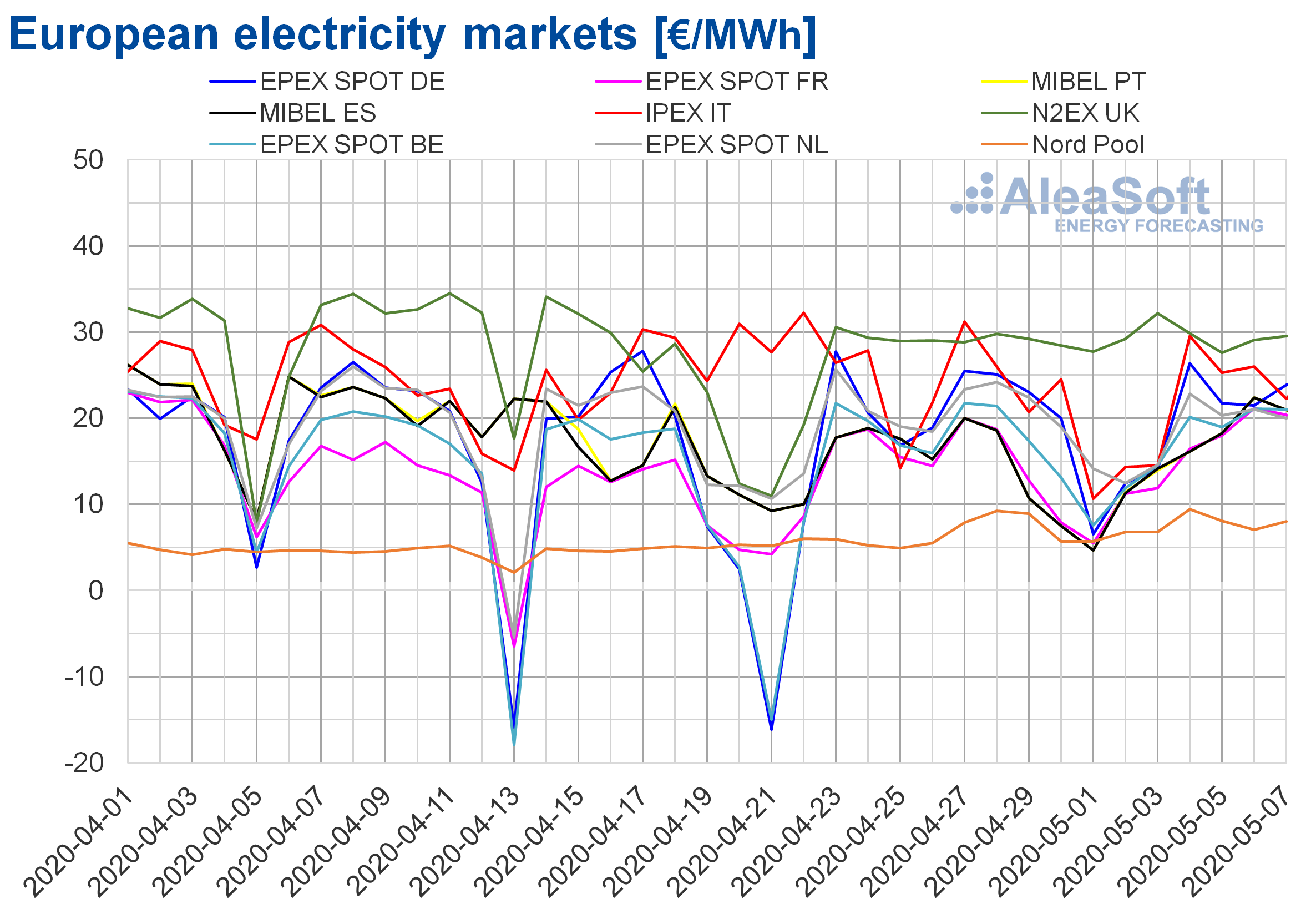 A fact to note is that on May 1 the MIBEL market of Spain and Portugal was that with the lowest daily price in Europe, of €4.63/MWh, even below the Nord Pool market, which is usually the lowest. This did not happen since the end of last year. Moreover, this is the lowest price of the year until May 7. The combination of lower electricity demand as it is a public holiday and high wind energy production are the causes of these prices.

The AleaSoft‘s price forecasting indicates that in the first days of next week the prices will fall in most European markets, mainly due to a significant increase in wind energy production in countries such as France and Germany.

So far this week, the electricity futures prices for the third quarter of 2020 registered a general drop in their settlement price in all the markets analysed at AleaSoft, between the last session of last week and the session of May 6. The Iberian Peninsula leads this decline, both in the EEX market of Spain, where there was a decrease of 4.9%, and in the OMIP market of Spain and Portugal, where the decline was 4.2% in both countries. On the other hand, the ICE market of the Nordic countries was the one that changed its price the least, with a decrease of only €0.02/MWh.

In the case of the futures for the next year 2021, the behaviour of the markets was heterogeneous in this period. The EEX market of Great Britain and the ICE market of Great Britain, Belgium, the Netherlands and the Nordic countries registered increases of between 0.1% and 0.9%. However, the rest of the markets analysed at AleaSoft registered decreases, including the NASDAQ market of the region in the Nordic countries, which registered a decrease of 1.6%.

The Brent oil futures prices for the month of July 2020 in the ICE market began this week with increases until reaching a settlement price of $30.97/bbl on Tuesday, May 5, 36% higher than that of the previous Tuesday. But on Wednesday, May 6, there was a decrease of 4.0% and the settlement price was $29.72/bbl, which was still 23% higher than that of the previous Wednesday. In today’s session, the prices stood above $29/bbl, and at times exceeded $31.50/bbl.

The start of the reductions in production agreed by OPEC+ in May and the expectations of an increase in demand with the start of the end of the confinement in some countries favoured the registered price increases. But the news of the European Commission’s forecast of the effects of the COVID‑19 pandemic on the economy slowed this recovery.

Despite the cuts in oil production, there is still a supply excess and the levels of the reserves are high, which will continue to exert a downward influence on prices and hinder their recovery.

The TTF gas futures in the ICE market for the month of June 2020 ended last month with a settlement price of €6.22/MWh for April 30. But, since May began, the prices remained below €6/MWh. On Tuesday, May 5, a settlement price of €5.67/MWh was reached, which is 11% lower than that of the previous Tuesday and the lowest in the last two years.

Regarding the TTF gas prices in the spot market, the first days of this week remained quite stable between €5.49/MWh of Tuesday, May 5, and €5.43/MWh of May 7, which is the lowest index price since at least October 2008.

On the other hand, the API 2 coal futures prices in the ICE market for the month of June 2020 began the month of May with a slight decrease with respect to the prices of the end of April. However, on Tuesday, May 5, the prices began to recover. Yesterday, Wednesday, May 6, the settlement price was $43.15/t, 5.5% higher than that of the previous Wednesday.

Regarding the CO2 emission rights futures prices in the EEX market for the reference contract of December 2020, the first days of this week remained below €20/t, following a downward trend. As a consequence, the settlement price of Wednesday, May 6, was €19.00/t, 5.9% lower than that of Wednesday of the previous week and the lowest since April 3. 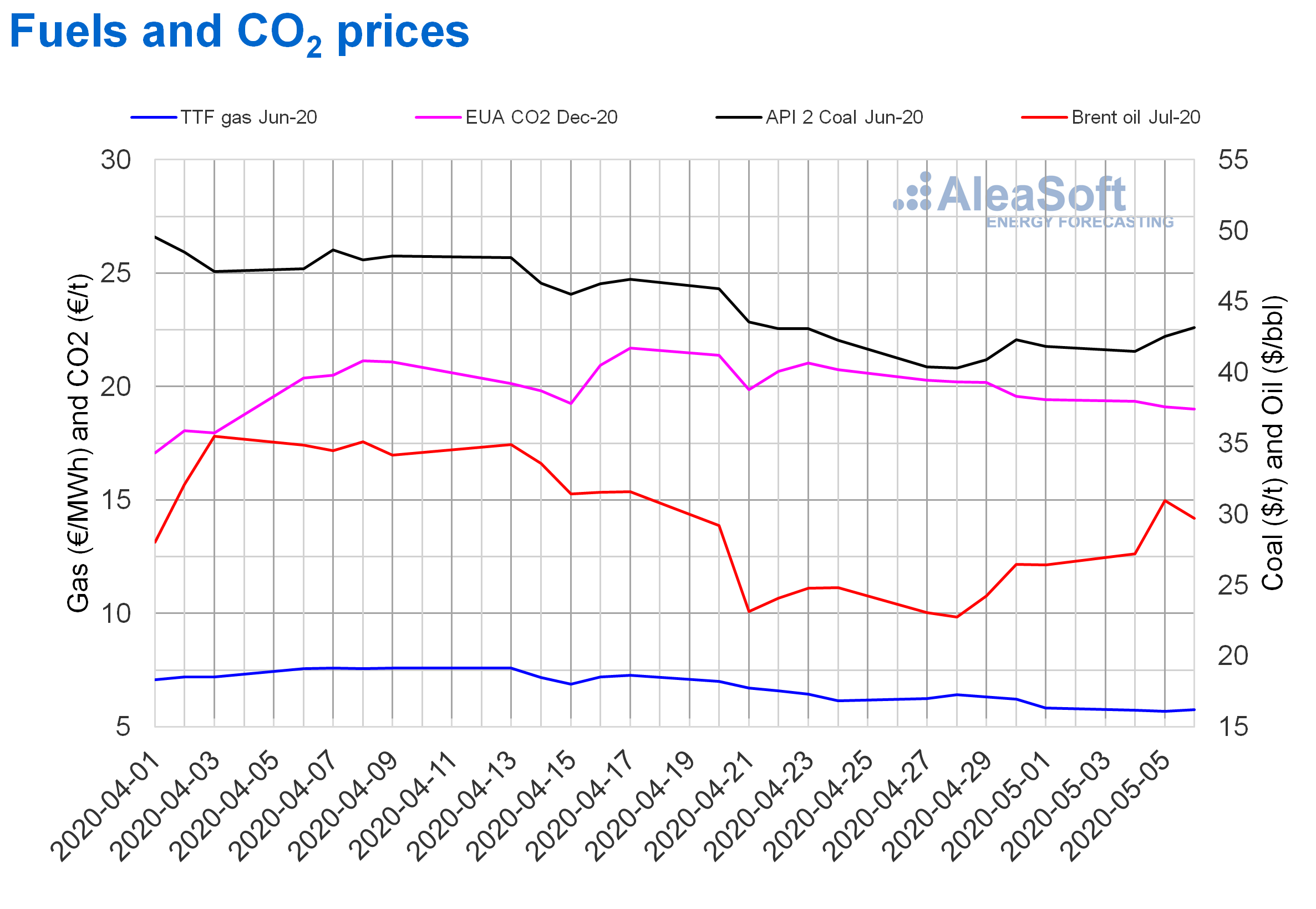 On the AleaSoft website, the observatory of the European electricity markets was enabled, which currently includes most of the main markets of the continent: MIBEL of Spain and Portugal, EPEX SPOT of France, Germany, Belgium, the Netherlands, Switzerland and Austria, IPEX of Italy, N2EX of Great Britain and POLPX of Poland. All observatories include the demand and price analysis. In the case of Spain, the wind, solar photovoltaic and solar thermal energy production and the temperature are also included.

On the other hand, on May 21 the webinar “Influence of coronavirus on electricity demand and the European electricity markets (II)” will be held. This webinar is a second part of the one held in mid‑April. On this occasion, the evolution of the markets during the COVID‑19 pandemic will be updated and special attention will be paid to the financing of renewable energy projects.