AleaSoft, April 29, 2020. The transport sector in Europe is one of the most energy consuming and it does so largely in the form of oil derivatives. This makes this sector one of the main emitters of CO2 and other polluting and greenhouse effect gases, and one of those responsible for the European Union’s foreign energy dependence.

The energy consumption in Europe

The energy consumption in the 28 countries of the European Union in 2017 amounted to more than 1 billion tonnes of oil equivalent, according to the International Energy Agency (IEA). Most of all that energy was distributed almost equally among the three most energy demanding sectors: the transport sector, with 28% of all consumed energy, the residential sector, with 25%, and the industrial sector, with 23% of the total energy. 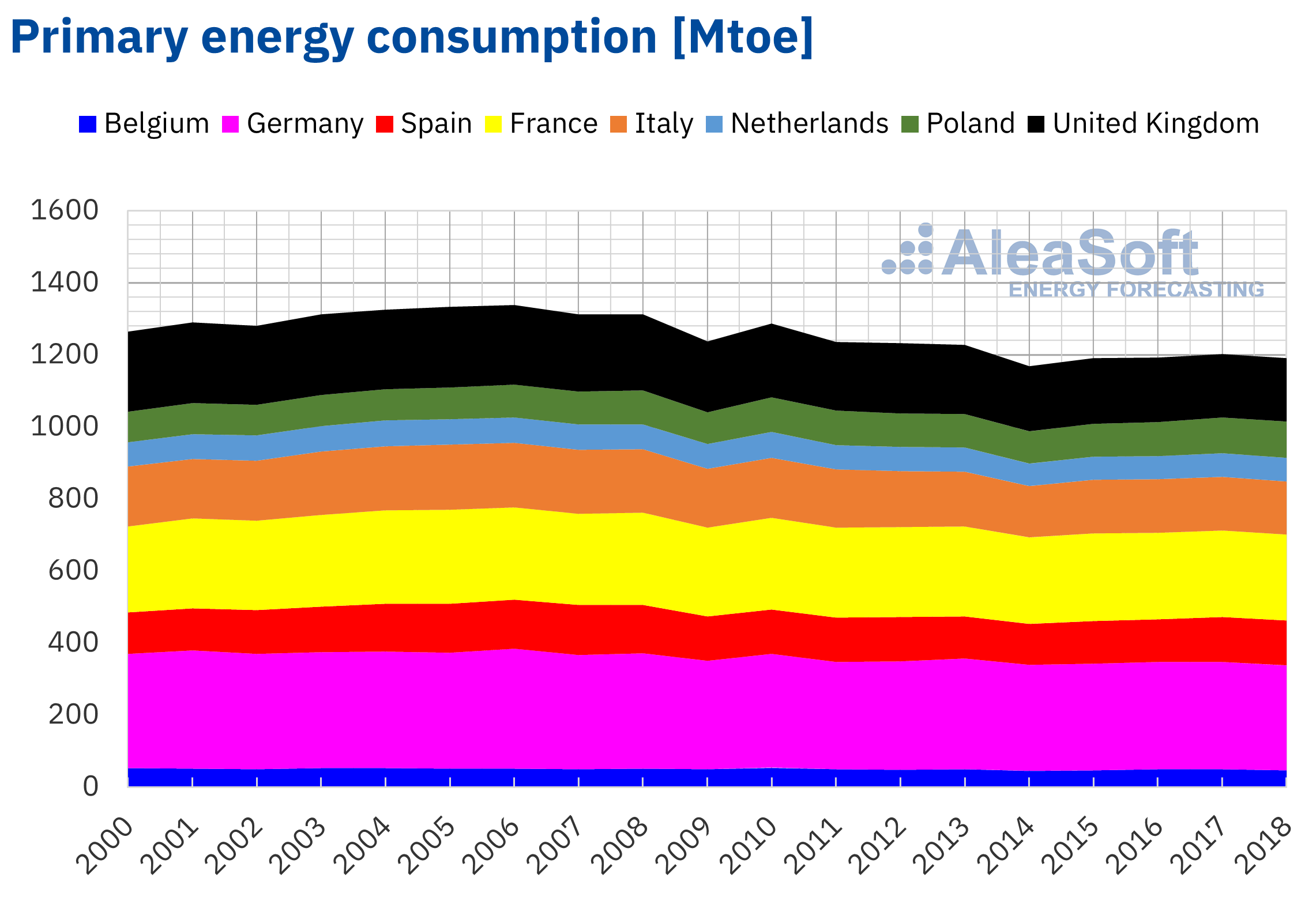 That is why any attempt at energy transition must keep these three sectors in mind. This article focuses on the transport sector and how the European countries face its transformation. 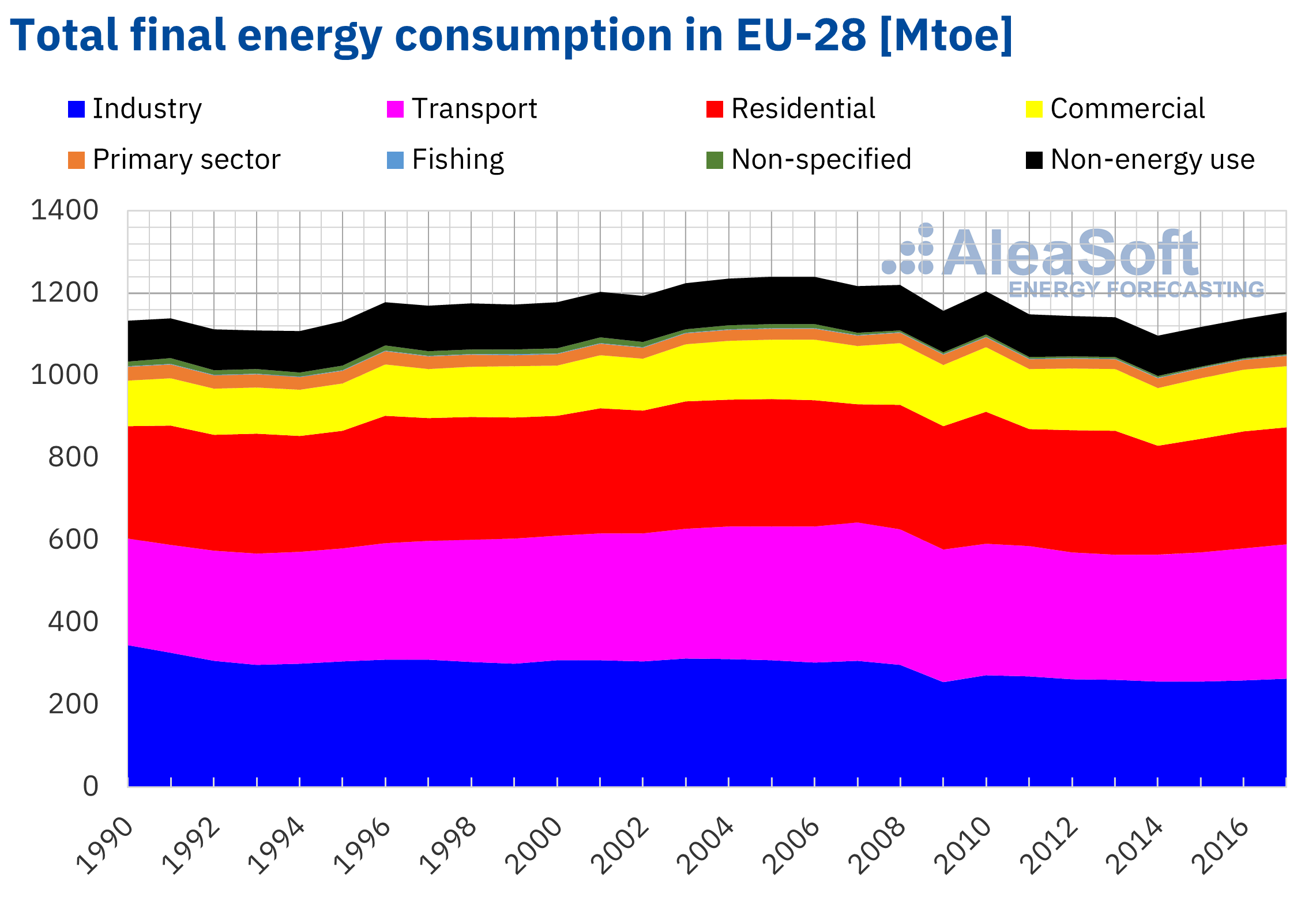 Dependence on oil and its derivatives

The dependence of Europe and Spain on oil and its derivatives is indisputable. In 2018, practically the half of the total energy consumed in Spain, 45%, came from petroleum products and that means a strong dependence on energy imports from abroad. In 2019, Spain imported 63.3 million tons of crude oil. Another 19.5 million tons of imported petroleum products must be added to this amount.

In the European Union as a whole, the costs of the energy imports amount to values of around 300 billion Euros per year. This strong external dependence for energy supply leaves European countries in a weak position in relation to the oil and gas exporting countries.

The role of the transport sector in the oil dependence

The transport sector plays a major role in this situation of energy dependence from abroad. On the one hand, almost half of all the energy consumed in Spain is dedicated to transport, 43% in 2018 according to the Ministry for the Ecological Transition (MITECO) and the Institute for the Diversification and Energy Saving (IDAE). On the other hand, according to the same sources, 94% of that energy destined for transport was consumed in the form of petroleum derivatives: gasoline, diesel, kerosene, fuel oil and LPG gas. And to close the circle, 79% of the total energy consumed in the form of petroleum products was destined for the transport sector.

With this enormous proportion of energy destined for transport and with the fact that practically all of that energy is in the form of petroleum derivatives, it is clear that the transport sector will play a leading role in the measures to achieve the polluting and greenhouse gas emission reduction targets.

The role of the transport sector in the emission reduction objectives

The numbers are clear. No emission reduction is possible without decarbonisation of the transport sector. If we focus on road transport, which represents 77% of all the energy consumed by the sector in Spain according to 2018 data, only 6% of the used energy was renewable, in the form of biofuels, and in a merely symbolic way, with natural gas, 0.5%, and with electricity, 0.03%.

According to the Spanish NECP, the Integrated National Energy and Climate Plan, this scenario must completely change until 2030. The objective is reaching 28% of renewable energy in the transport sector. To do this, the measures to be taken are aimed at the transport electrification, with five million electric vehicles, the promotion of biofuels, and an increase of the use of the shared public transport. With these measures, the intention is to achieve a 33% reduction in the emissions generated by the transport.

In the longer term, by 2040, the PNIEC commits to that all new passenger cars and light commercial vehicles are already zero emission. To achieve this, the development of advanced biofuels and green hydrogen, of 100% renewable origin, is considered a priority. According to AleaSoft, the general use of hydrogen as a fuel is essential, especially for heavy and long‑distance transport, for example, the maritime and air transport, which accounts for 22% of the total energy consumed by the transport, and where, in addition, currently 100% of this energy comes from petroleum derivatives.

At the same time, the hydrogen production is essential to be able to take advantage of and respond to the increase in the electricity production with renewable energy. This affordable green electricity will be a very important element in the decarbonisation of both transport and industry and will also provide medium and long‑term energy storage.

Implications for the European electricity and gas system

The possible penetration of the hydrogen in the current European energy system.
Source: AleaSoft.

The future of the European energy sector.
Source: AleaSoft.

This transition to a practically renewable energy system is going to be affected by the economic crisis that is going to ensue from the health crisis caused by the COVID‑19 pandemic. The question that remains to be found out is whether this crisis will represent only a delay, of some years, in the energy transition plans, or if it will mean a lowering of the environmental objectives or a partial or total cancellation, in the worst case, of these plans.

What seems obvious is that the Energy and Climate Plans of the European countries are going to need a major revision to adapt to the new situation, and, whenever possible, take advantage of the new opportunities that also appear during the crises.