The European electricity markets and the Brent, gas, coal and EUA markets started June with rises

AleaSoft, June 8, 2020. Most electricity markets started June with price increases. The solar energy production was lower than in the previous week in all the markets and in some cases the wind energy too, leading to higher prices. Other energy markets, such as those of Brent oil, TTF gas and API 2 coal started the month with increases, something that also happened with the CO2 emission rights, these being other elements favouring increases in the electricity markets.

The solar energy production during the past week decreased in all the European markets analysed at AleaSoft compared to the previous week. The steepest decline was registered in the French market, which ended the week with 30% less generation. In the German market it decreased by 16% while in the Iberian Peninsula and Italy it fell by 13% and 4.9% respectively. 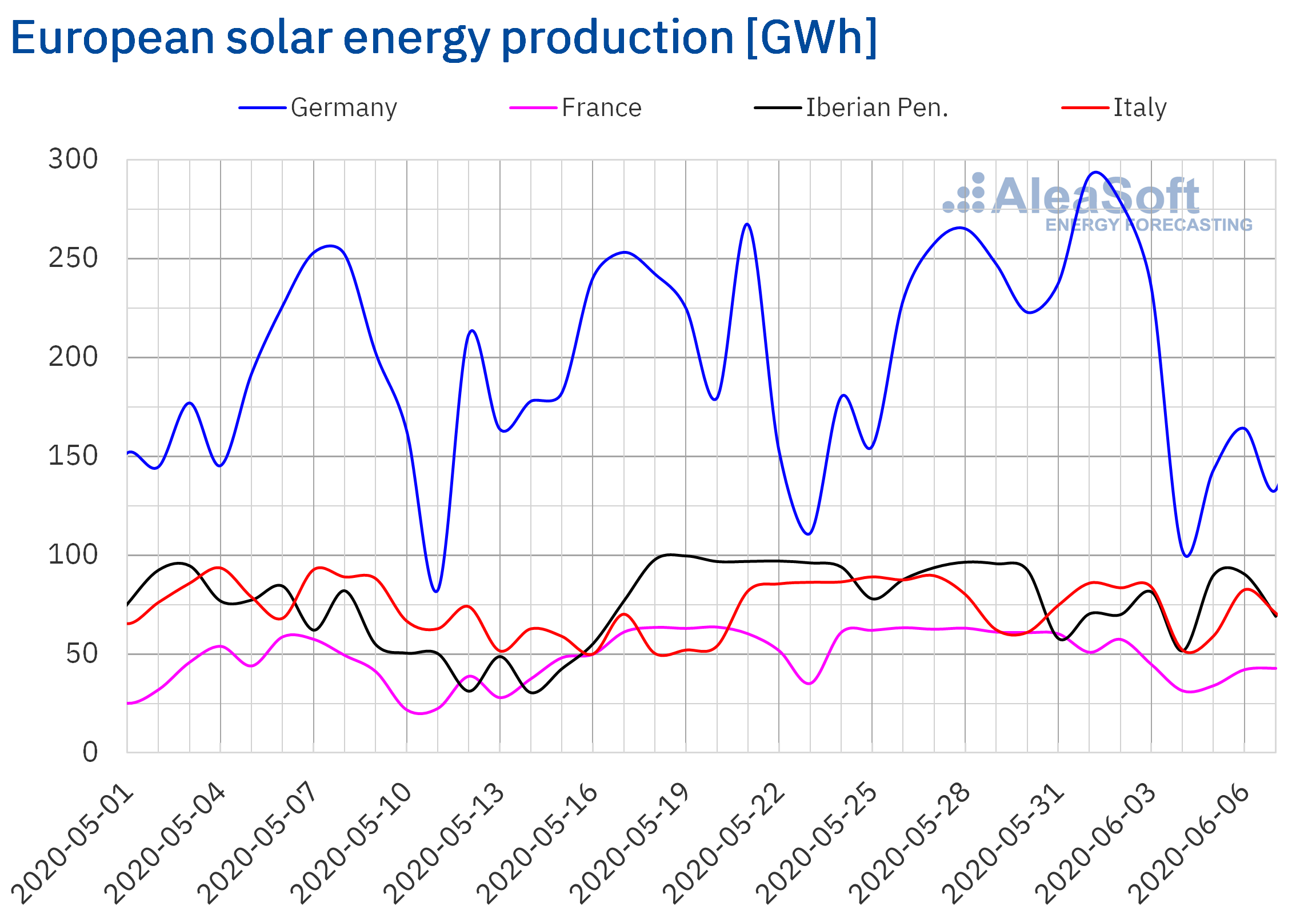 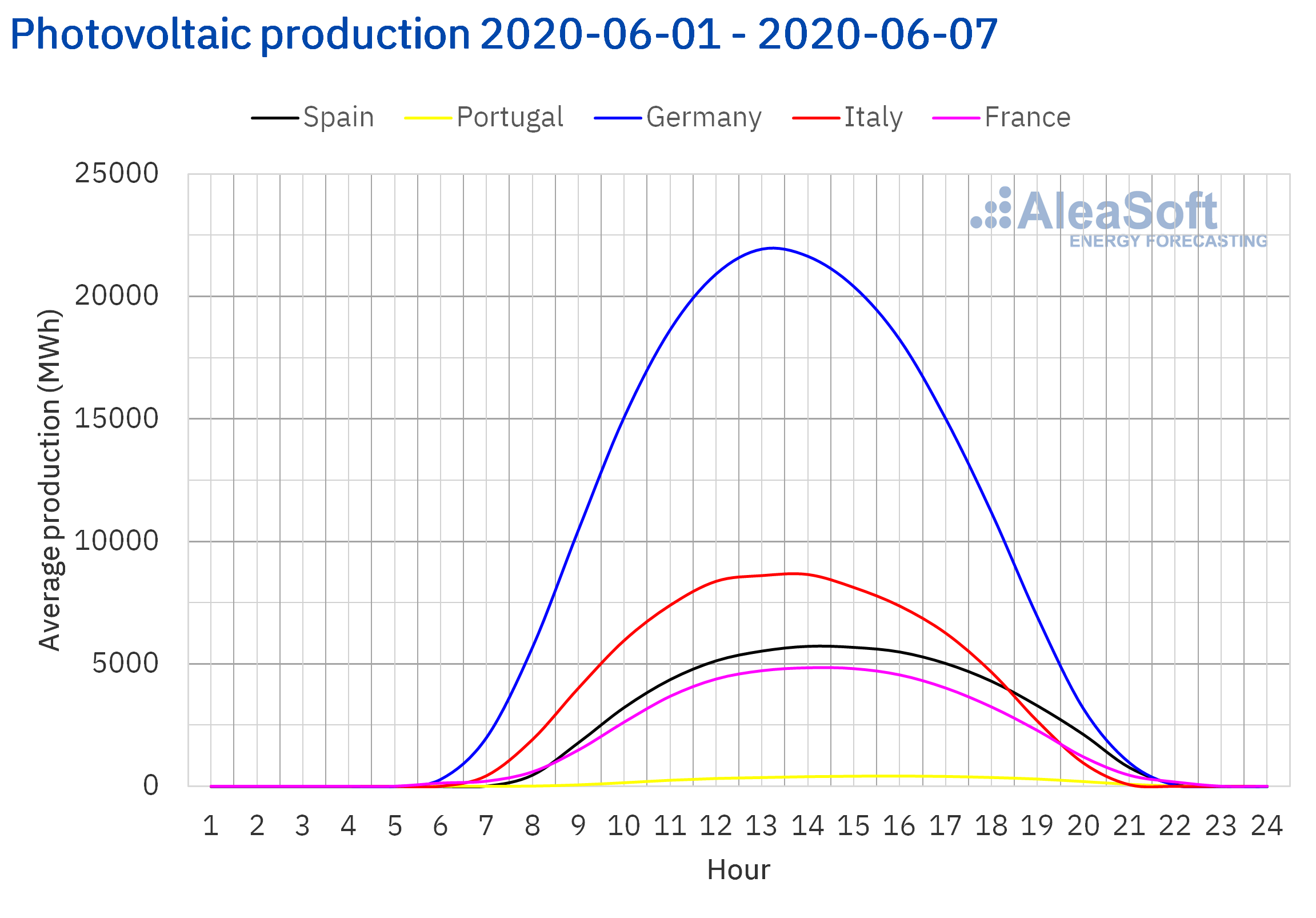 The wind energy production increased by 31% in the German market last week, compared to the previous week. In the Italian market there was also a considerable increase of 28%, while in the Portuguese market it only increased by 2.7%. On the contrary, in the Spanish market the production with this technology decreased by 16% and in the French the decrease was 3.4%.

So far in June, the wind energy production was 25% lower compared to the same number of days in June 2019 in the Iberian Peninsula, mainly due to the 45% decrease in this production in the Portuguese market during this period. On the contrary, in the Italian market there was an increase in wind energy generation of 86%, while in Germany and France the increases were 27% and 12% respectively.

For this week the AleaSoft‘s wind energy production forecasting indicates increases in production in the Iberian Peninsula. On the contrary, a reduction is expected compared to last week in the markets of Germany, France and Italy. 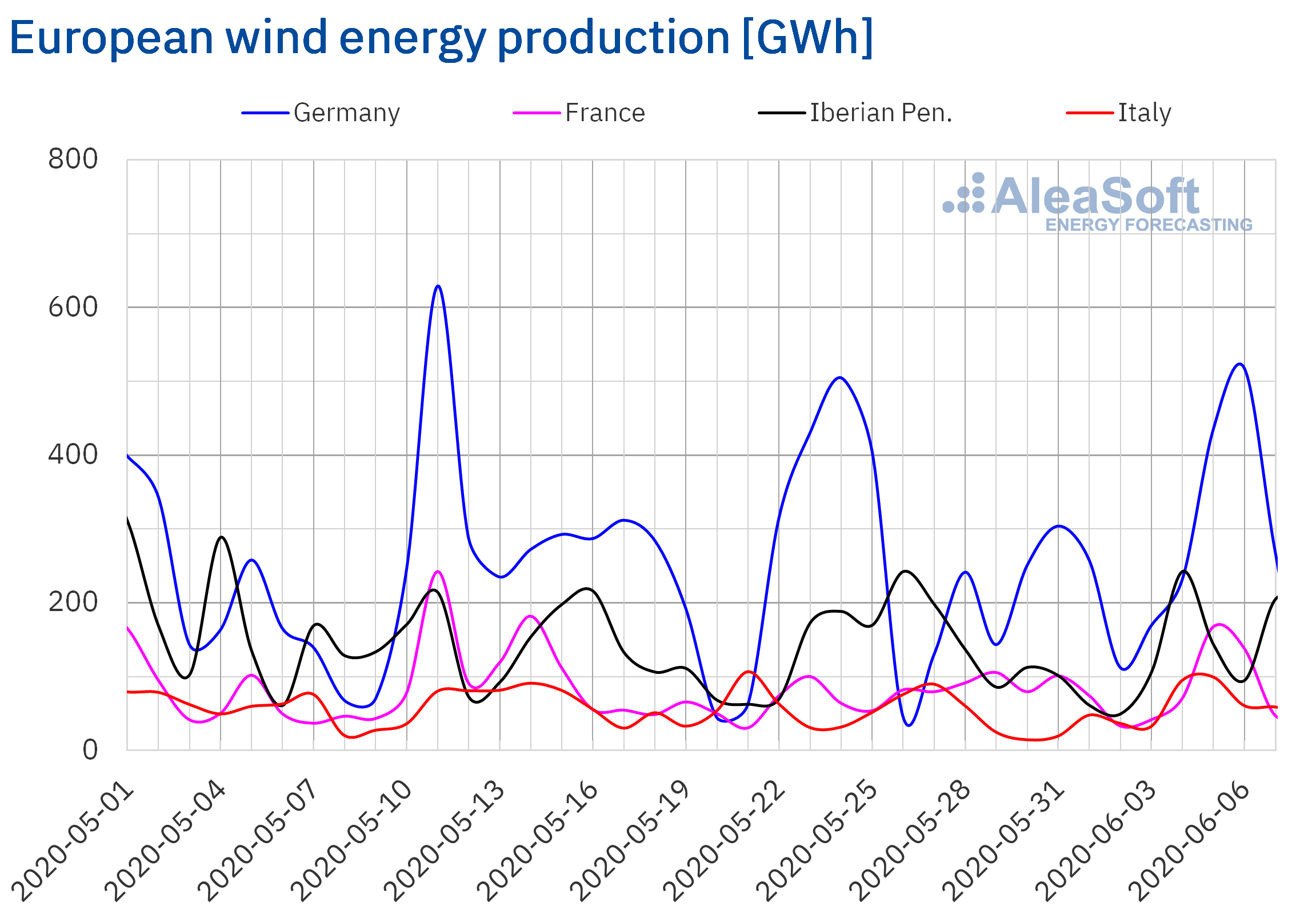 Last week was marked by a heterogeneous behaviour on the electricity demand in the European electricity markets compared to the previous week of May 25, mainly influenced by the holidays of the last two weeks. In Great Britain it increased by 7.4% due to the effect of the Spring Bank Holiday of Monday, May 25. On the other hand, the demand of the Italian market decreased by 5.0% due to the effect of the holiday of the day of the Republic of Italy on Tuesday, June 2. The Pentecost Monday, celebrated this year, on June 1, was another holiday that contributed to changes in demand, causing slight falls below 1% in France, Germany and Belgium. In Portugal and Spain, the demand increased by 1.7% and 0.2%, respectively, with the measures of deconfinement being the main cause of these increases. In the case of the Netherlands, an increase of 1.4% was registered.

The evolution of the electricity demand in recent weeks can be analysed in the AleaSoft’s observatories, where the Europe’s electricity markets data is updated daily.

For this week, the AleaSoft’s demand forecasting indicates that the behaviour of the demand of the European markets will depend on the new measures of deconfinement adopted by the different countries from this Monday, June 8. The most notable increases in demand in Europe should take place from June 15, when it is expected that the mobility restrictions will be more relaxed and that the borders in most of the member states will be reopened. 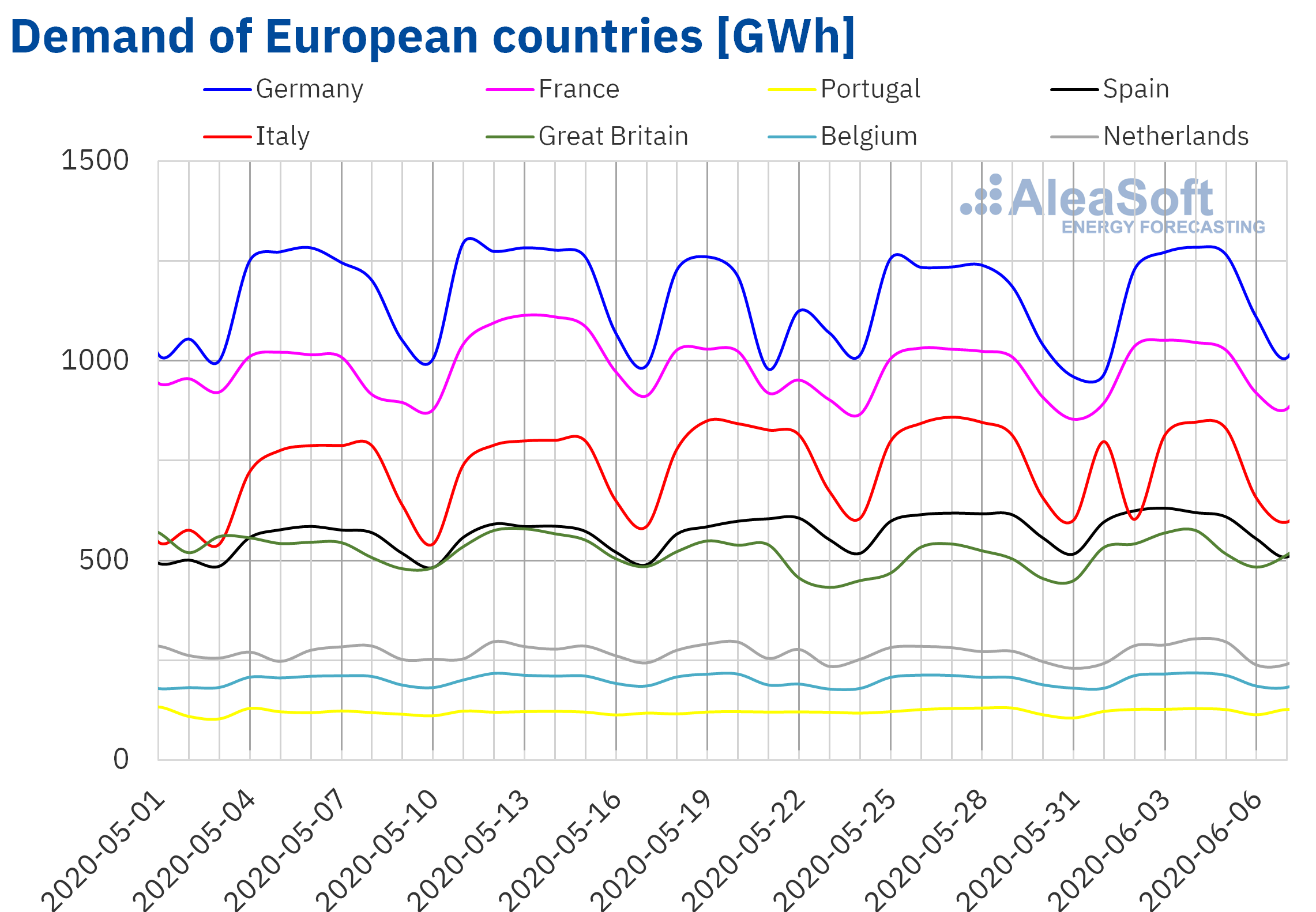 The week of June 1 the prices increased compared to those of the previous week in most of the analysed European electricity markets. The exceptions were the Nord Pool market of the Nordic countries, the IPEX market of Italy and the N2EX market of Great Britain, with declines of 29%, 4.9% and 3.3% respectively. The market with the highest price rise, of 19%, was the EPEX SPOT market of France, followed by the EPEX SPOT market of Belgium and the Netherlands with increases of 15% and 11% respectively. While the market where the price rose the least, 4.6%, was the MIBEL market of Spain.

The market with the lowest prices throughout the past week was that of the Nordic countries, averaging €3.13/MWh at the end of the week. The average prices of the EPEX SPOT market of France, Belgium, the Netherlands and Germany were between €17.09/MWh and €19.78/MWh. Meanwhile, the MIBEL market averaged the highest prices, of €28.90/MWh in the Portuguese market and €28.81/MWh in the Spanish market. In the Italian and the British markets the weekly average prices were €21.72/MWh and €25.98/MWh respectively.

On the other hand, on Monday and Saturday of last week negative hourly prices were reached in some European electricity markets. On Monday, June 1, there were negative hourly prices in the markets of Germany, Belgium, France and Switzerland. These were favoured by the decrease in demand due to the holiday of the Pentecost Monday.

The high renewable energy production and the decrease in demand of the weekend allowed negative hourly prices to be also reached on Saturday, June 6, in the markets of Germany, Belgium and France. 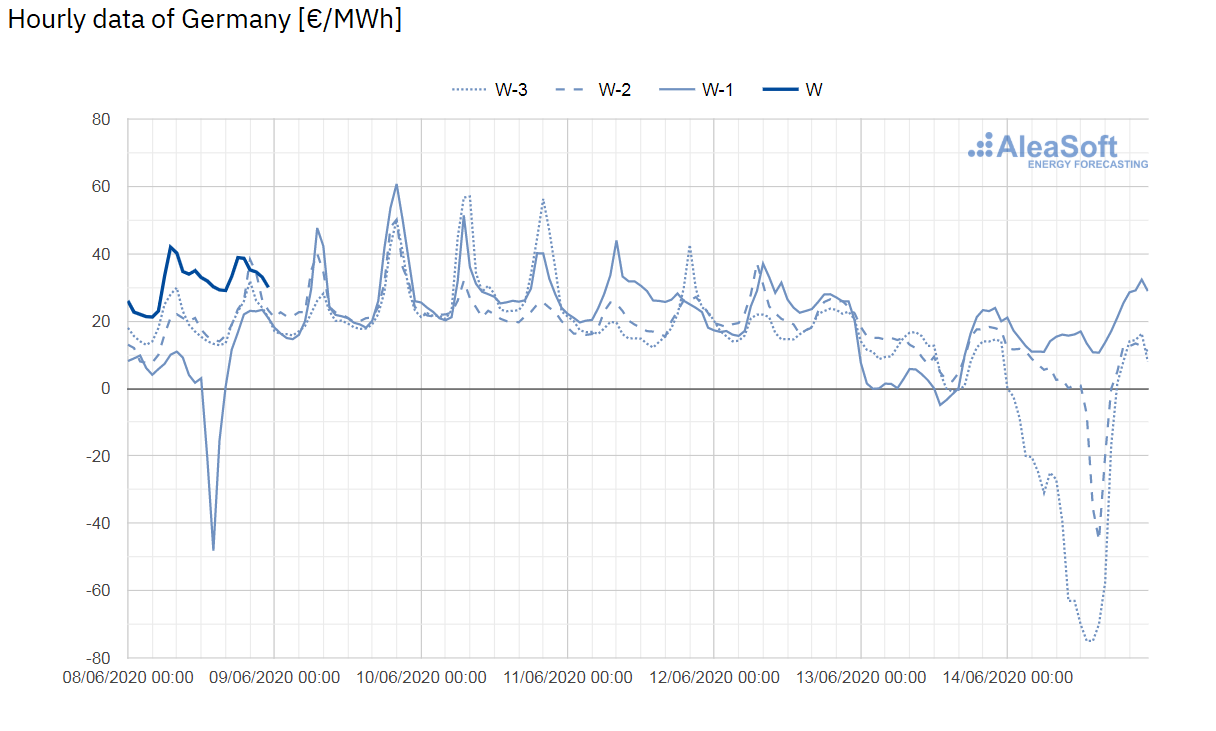 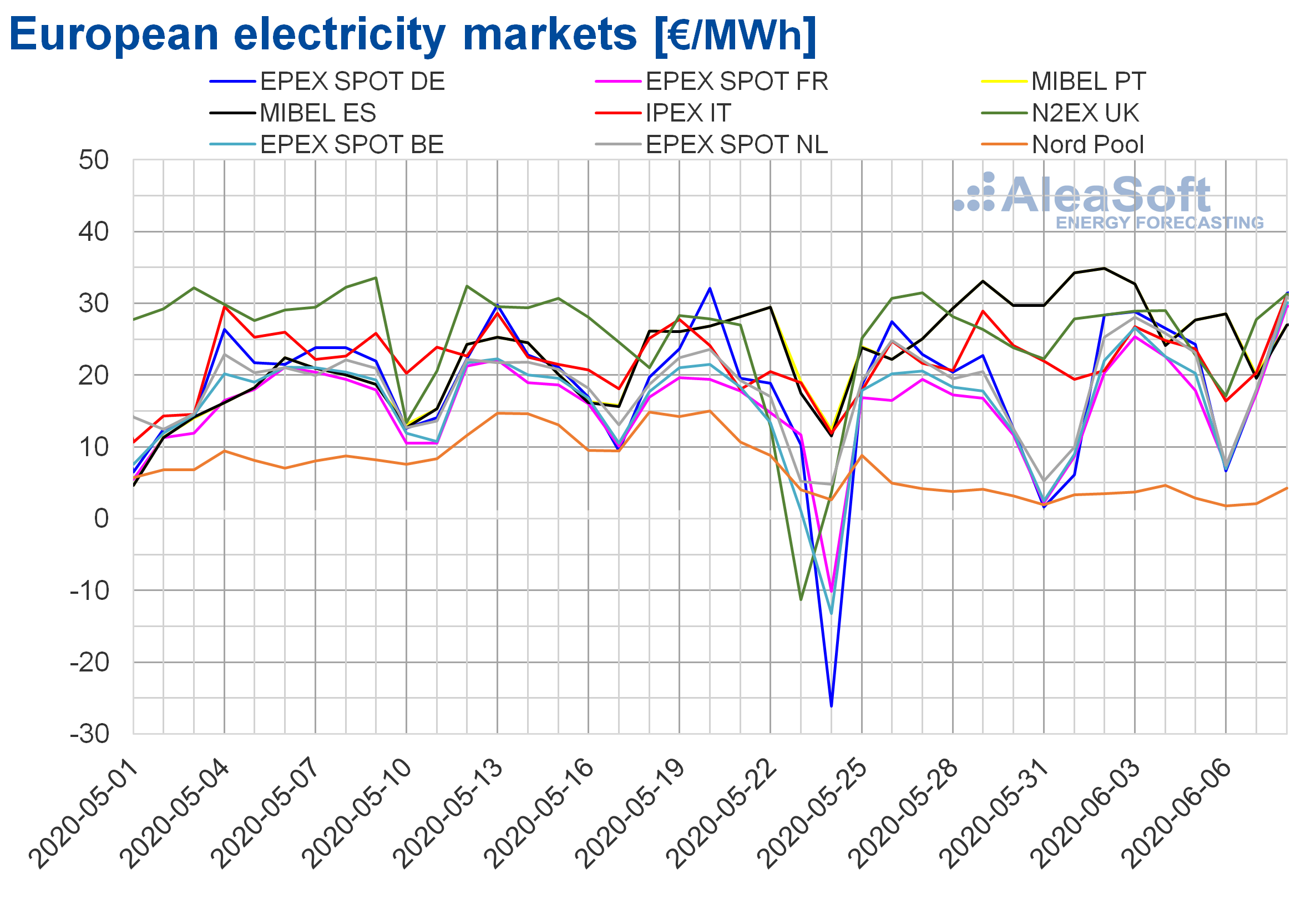 The AleaSoft‘s price forecasting indicates that this week of June 8, the prices will increase in most of the analysed European electricity markets due to the decrease in renewable energy production. However, the MIBEL market will be the exception. Decreases in prices associated with a notable increase in wind energy production in the Iberian Peninsula are expected in this market. 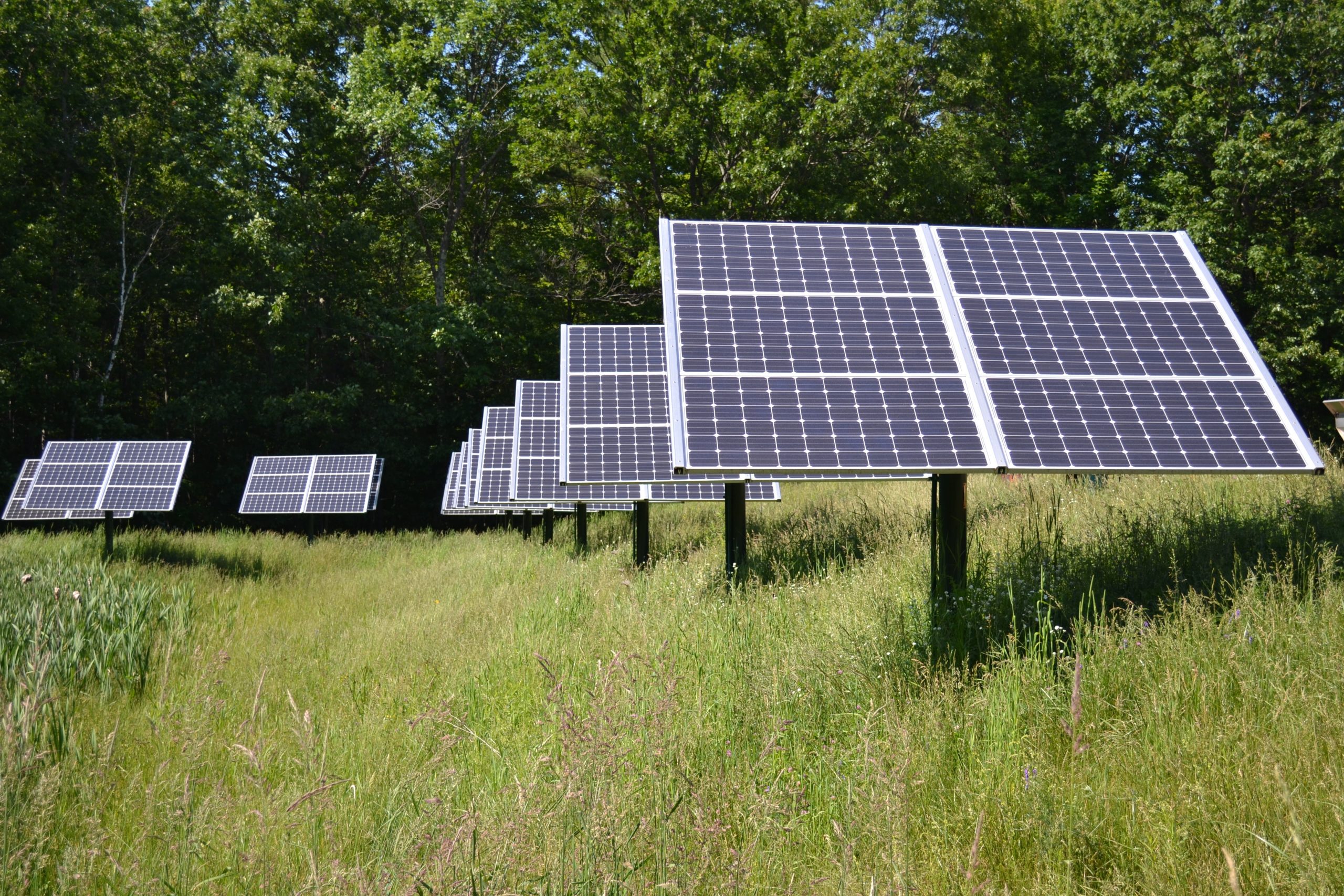 Regarding the electricity futures for the calendar year 2021, a very similar behaviour was reported. Generalised rise in the markets analysed at AleaSoft, led by the German EEX market with a 6.2% increase. In general, the increase in prices is around 4.2% for this annual product. In this case, the market with the lowest variation was the EEX of Great Britain, with a difference between the analysed sessions of €1.08/MWh, which represents an increase of 2.9%.

The Brent oil futures prices for the month of August 2020 in the ICE market the week of June 1 maintained an upward trend and every day they were higher than those of the same days of the previous week. On Friday, June 5, a settlement price of $42.30/bbl was reached, 12% higher than that of the previous Friday. On the other hand, prices above $40/bbl were not registered since March 6. In today’s session, the prices also remained above $40/bbl.

The decrease in production and the progressive recovery in demand in China, the United States and Europe are allowing the recovery of the oil prices. The expectations caused by the OPEC+ meeting of last Saturday to extend the cuts of May and June to the month of July contributed to the settlement price exceeding $40/bbl on Friday, June 5.

The recent OPEC+ agreement to maintain the cuts in production in July will favour the recovery in prices to continue, despite not having Mexico’s accession. In addition, on Sunday, Saudi Arabia raised its official selling prices. On the other hand, the reduction in production in the Gulf of Mexico due to the tropical storm Cristobal may also exert an upward influence on the evolution of the prices in the coming days.

As for the prices of the CO2 emission rights futures in the EEX market for the reference contract of December 2020, they increased during the first week of June until reaching a settlement price of €23.24/t on Friday, June 5. This price was 8.6% higher than that of the previous Friday and the highest since March 11. 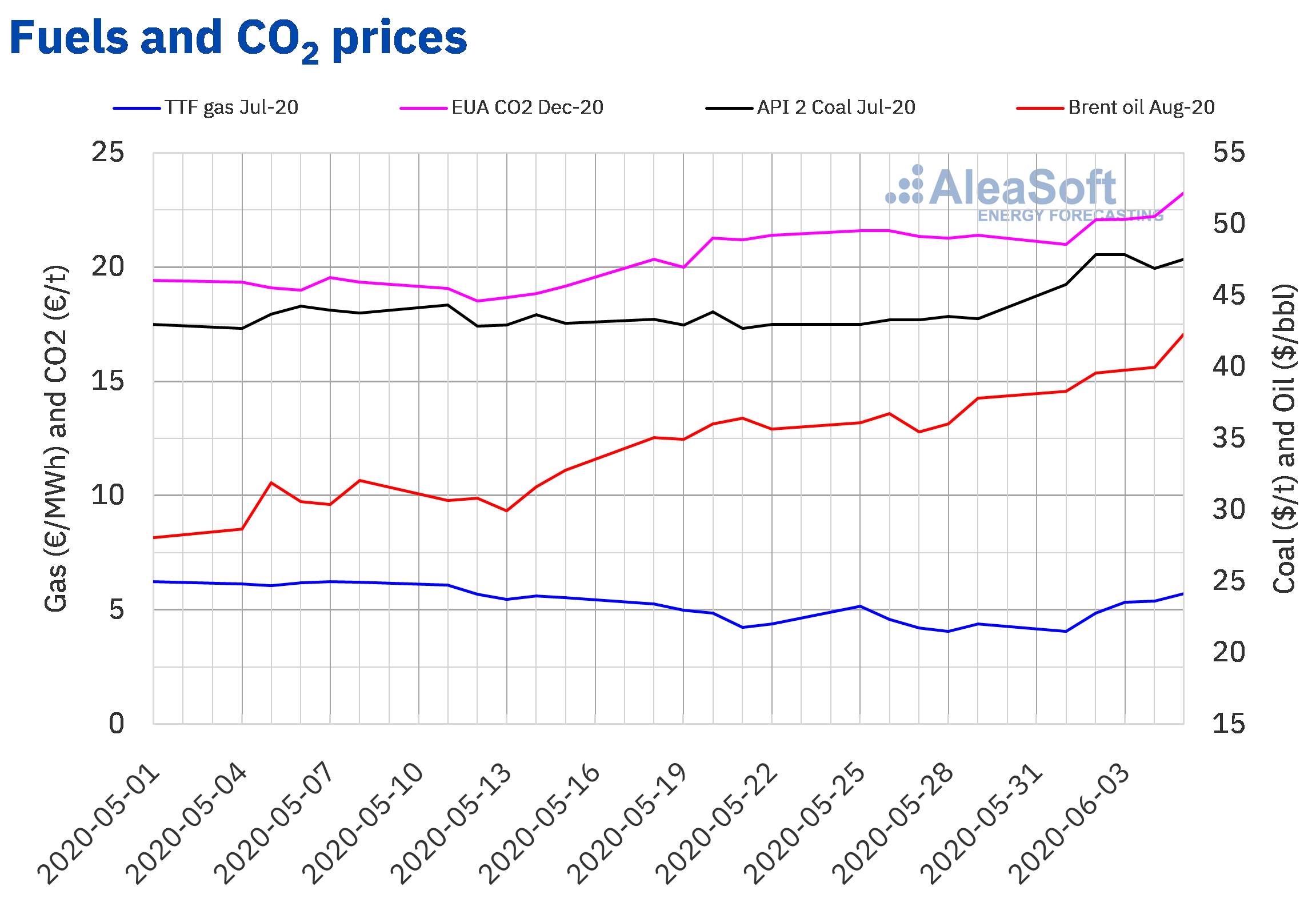 At AleaSoft, work continues to include new data in the energy markets observatory in order to allow the analysis of its behaviour during the coronavirus crisis. The last novelty is the Brent oil futures for M+2 in the ICE market. The observatory is a tool that includes comparative hourly, daily and weekly charts for the last few weeks and it is currently available for the fuels, the CO2 emission rights and the main European electricity markets.

The webinar Influence of coronavirus on electricity demand and the European electricity markets (part 3) will be held on June 25, which will address the issues:

And it will have the speakers:

This will be a new opportunity to understand how the markets behaved during the COVID‑19 pandemic and the subsequent economic crisis and it will be a continuation of the previous editions of April and May.