AleaSoft, January 18, 2021. During the third week of January, the European electricity markets prices are expected to fall, something that already happened during the second week of the month in some markets. The causes will be the increase in wind energy production and the recovery of the temperatures, which, in addition to causing a drop in demand, will lead to a drop in gas prices. During the second week of January, the high gas and CO2 prices led to an increase in the prices of some electricity markets of Europe.

The solar energy production increased in all the markets analysed at AleaSoft during the second week of January compared to the previous week. The largest increase was 115% and was registered in the Spanish market. In the Italian market it increased by 91% while in the Portuguese market the increase was 76%. In the German market it grew by 53% and in the French market by 6.8%. 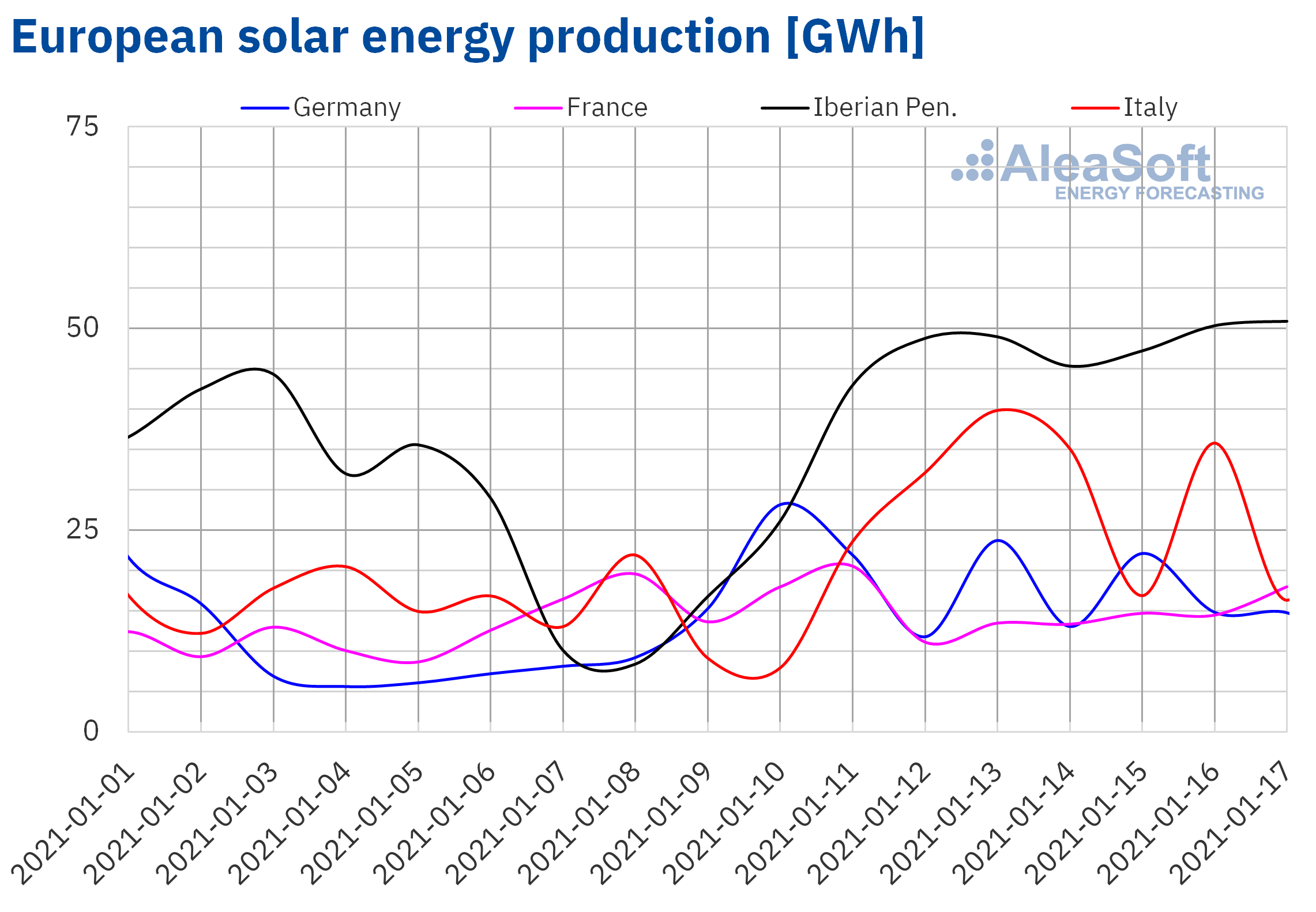 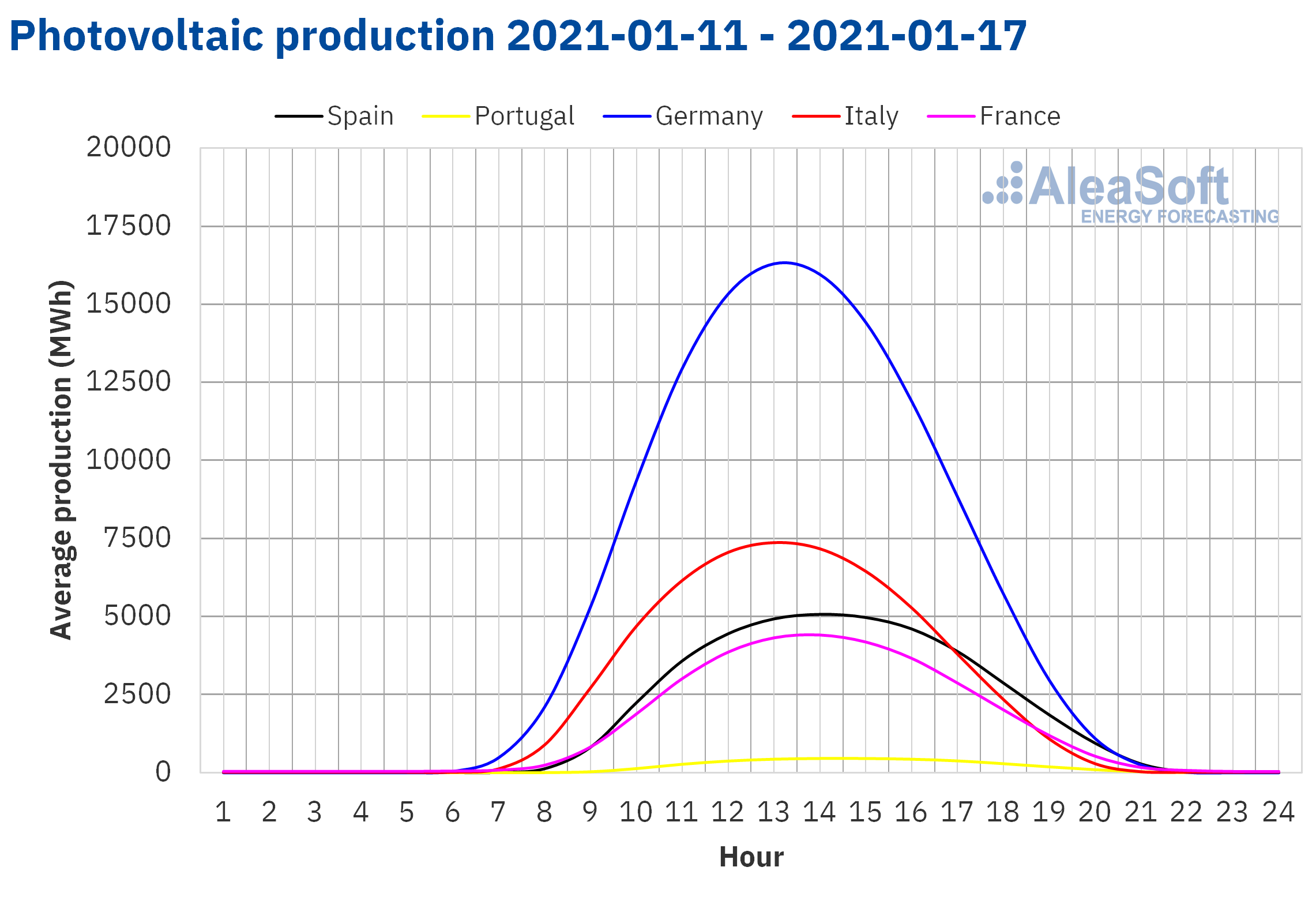 For the week ending on Sunday, January 24, the AleaSoft‘s wind energy production forecasting indicates that there will be an increase in all the markets analysed at AleaSoft compared to the previous week. 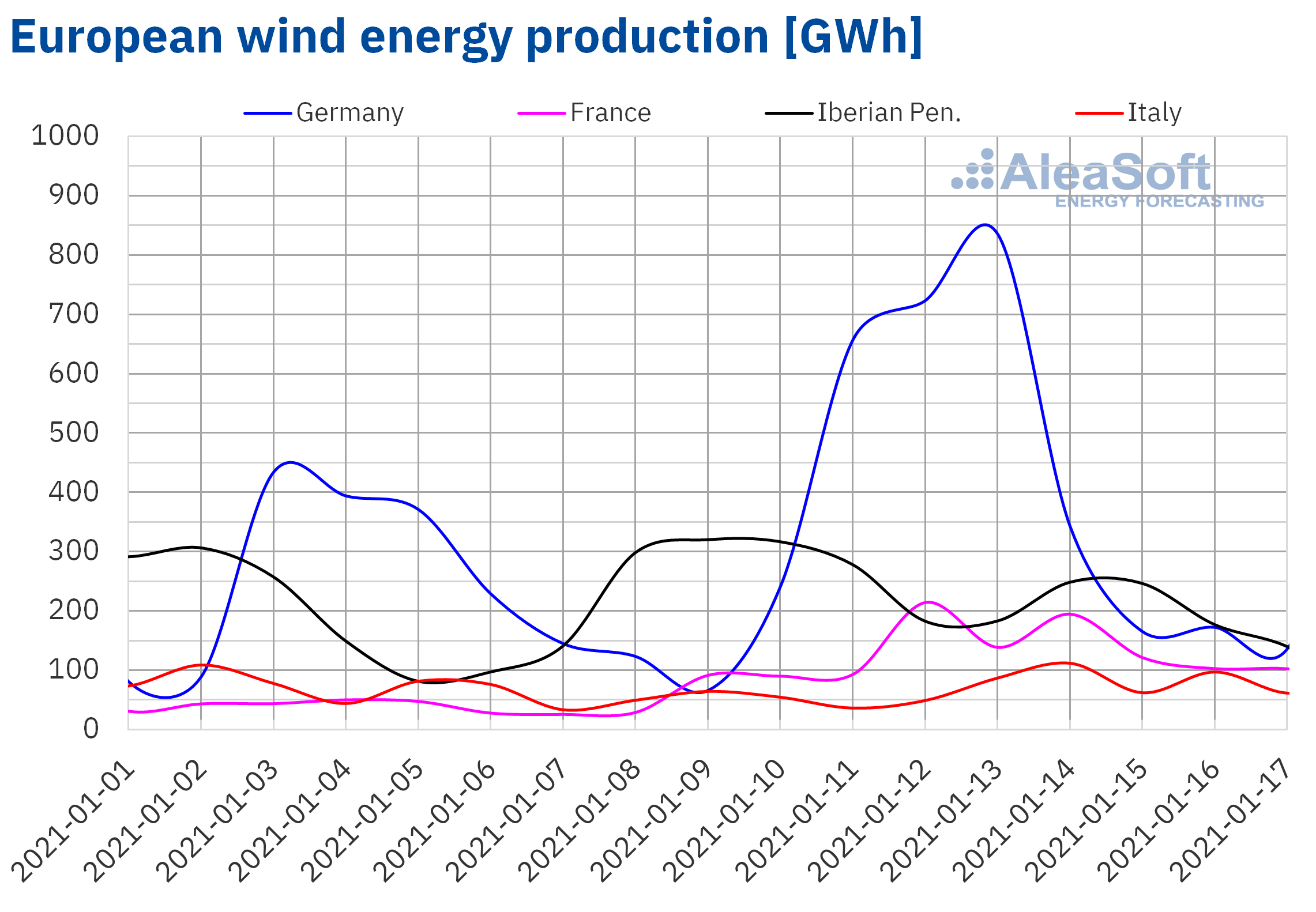 In the week of January 11, the electricity demand registered growths close to 10% in some European markets compared to the previous week. The average temperatures fell by around 1 °C in Germany and Italy, which led to increases in demand in the markets of these territories, of 9.5% and 16% respectively. In Spain and Belgium, where the average temperatures were higher than those of the previous week, minor increases were registered, of 5.5% and 1.5% respectively. In some cases, the recovery in demand was favoured by the return to the activity after the holidays of Christmas and the beginning of the year. On the other hand, in the rest of the markets the week ended with falls in demand of up to 5.5% of France.

The AleaSoft‘s demand forecasting indicates that in the week of January 18, the demand will fall in most European markets, while in Italy and Great Britain it will rise slightly compared to the values of the previous week. 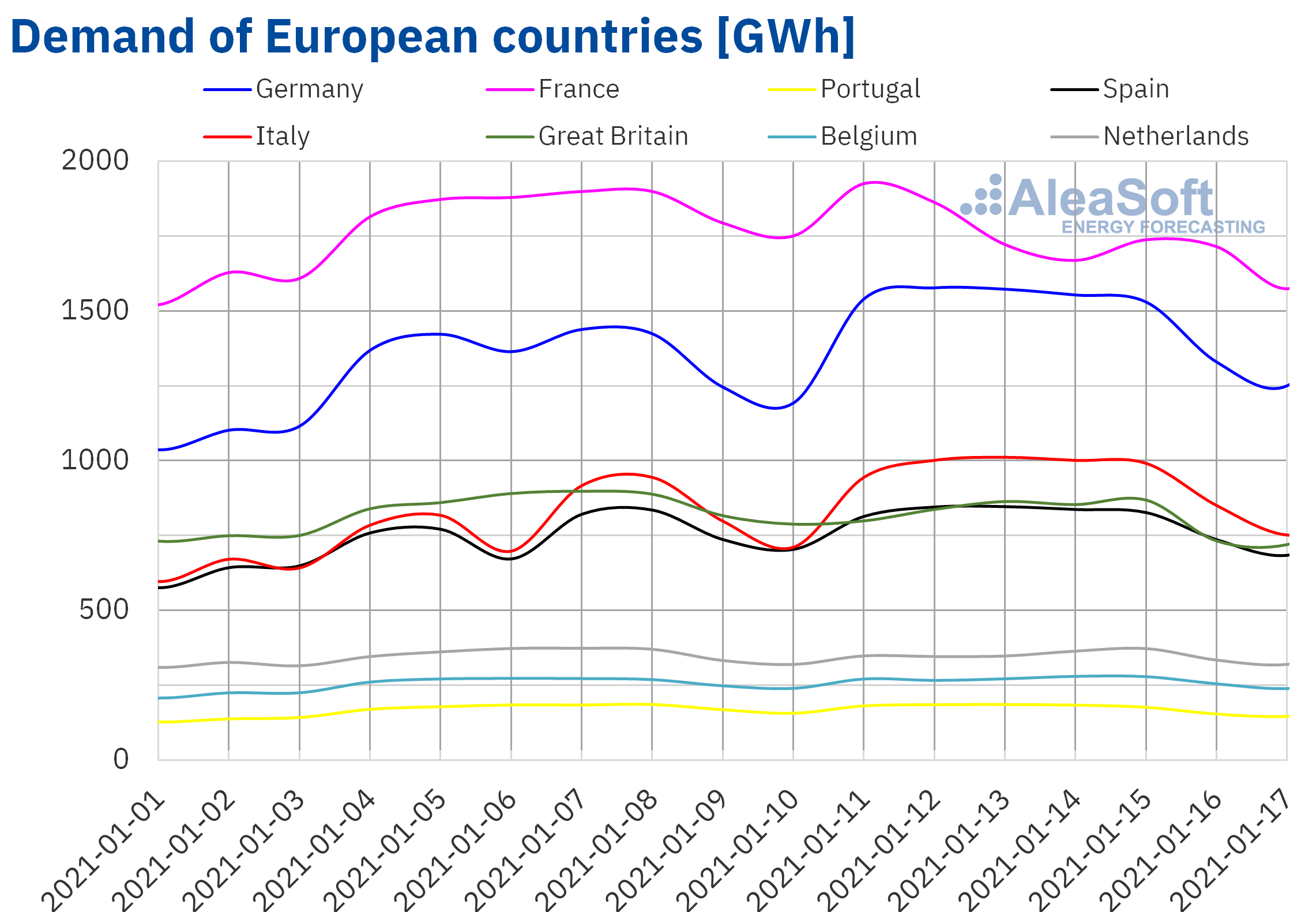 The week of January 11, the prices of most of the European electricity markets analysed at AleaSoft continued to increase compared to those of the previous week. However, in the EPEX SPOT markets of Germany, Belgium and France and in the Nord Pool market of the Nordic countries, the prices started to decline. The largest decrease was that of the German market, of 6.4%. Regarding the price rises, the market with the highest price increase, of 39%, was the UK N2EX market. In the rest of the markets, the price rises were between 2.8% of the EPEX SPOT market of the Netherlands and 6.9% of the IPEX market of Italy.

The second week of January, the weekly average prices were above €55/MWh in almost all the analysed European electricity markets. The exception was the Nord Pool market, with an average of €49.03/MWh. On the other hand, the market with the highest average, of €131.58/MWh, was the UK market, followed by the MIBEL market of Portugal and Spain, with averages of €80.23/MWh and €79.22/MWh, respectively. In the rest of the markets, the prices were between €55.72/MWh of the German market and €67.59/MWh of the Italian market.

Regarding the daily prices, the price of January 13 in the British market stands out, of £198.79/MWh. This daily price is the highest reached in this market at least since January 2010. On that day, the highest hourly price in the N2EX market was that of the hour 19, of £1499.62/MWh, which was also the highest in the last eleven years. On January 14, the price exceeded £1400/MWh again at the same time, although it was slightly lower, of £1494.65/MWh. 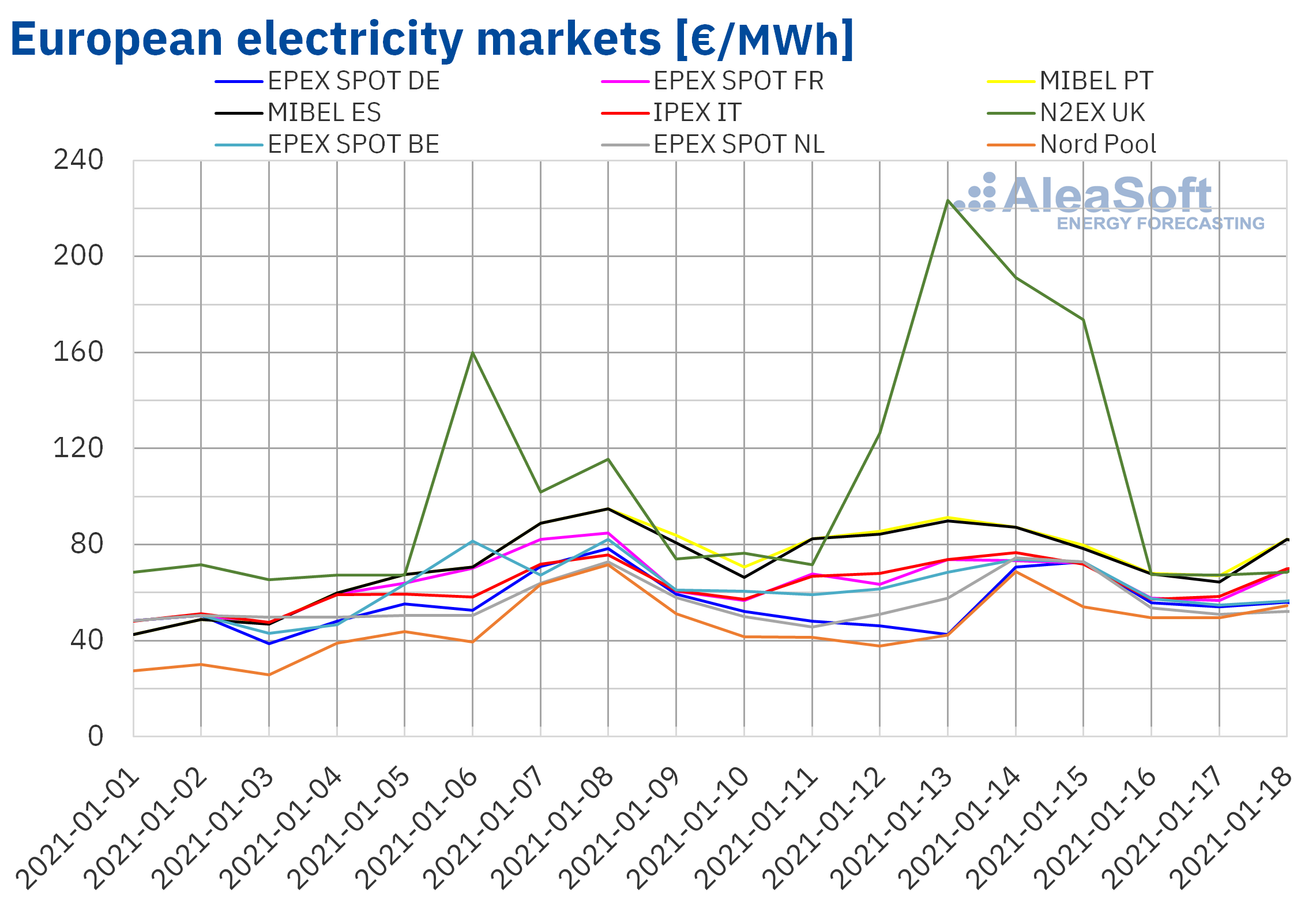 In the second week of the year, the increase in wind and solar renewable energy production in countries such as Germany and France allowed the prices to begin to fall in some electricity markets. On the other hand, the price increases were driven by the increase in gas prices, by the high prices that the CO2 is registering and in some cases by the increase in demand.

The AleaSoft‘s price forecasting indicates that in the week of January 18 there will be a general decline in prices in the European electricity markets, favoured by a significant increase in wind energy production in Europe and the recovery of the temperatures, which are expected to also lead to lower gas prices. 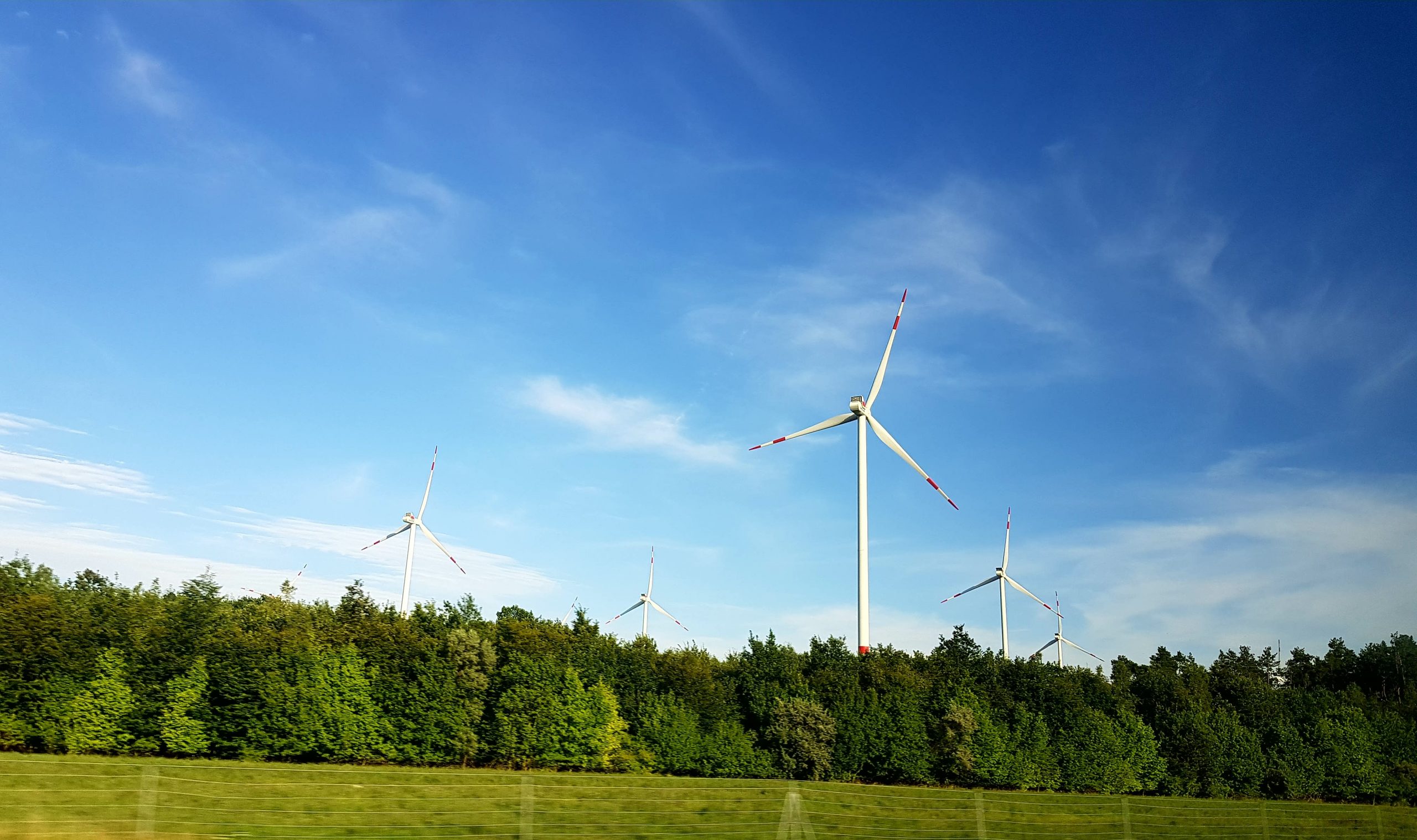 The electricity futures prices for the second quarter of 2021 registered a general decrease in the European markets analysed at AleaSoft. The EEX market of Spain was the one with the greatest difference between the sessions of January 8 and January 15, with a decrease of 6.7%. It was closely followed by the OMIP market of Spain and Portugal with decreases of 6.4% in both countries. In the rest of the markets, the decreases were between 3.5% and 5.2%.

The product of the calendar year 2022 also registered price declines in all markets. In this case, the NASDAQ market of the Nordic countries, closely followed by the ICE market of the same region, were the markets with the highest percentage variation, reducing their prices by 11% and 10% respectively. The EEX market of Italy was the one where the prices changed the least between the analysed sessions, with a decrease of 2.2%.

The increase in COVID‑19 infections worldwide and the new confinement measures stopped the upward trend in oil futures prices last week. This trend had been favoured by the start of the vaccinations in many countries and by the commitments made by the OPEC+ to limit their production. However, the evolution of the pandemic could extend the confinements, affecting the demand and the prices.

As for the settlement prices of the TTF gas futures in the ICE market for the month of February 2021, the second week of January, they remained above €20/MWh. The highest settlement price of the week, of €26.16/MWh, was reached on Tuesday, January 12. This price was 45% higher than that of the same day of the previous week and the highest in the last two years. However, as of Wednesday the prices began to fall and the settlement price of Friday, January 15, was €20.20/MWh. The forecasting of higher temperatures for the third week of January favoured this change in trend.

Regarding the settlement prices of the CO2 emission rights futures in the EEX market for the reference contract of December 2021, the second week of January they remained above €30/t. The maximum price, of €34.65/t, was reached on Tuesday, January 12. This price was 5.2% higher than that of the previous Tuesday, but 0.7% lower than that of Friday, when the maximum price of the first week of January was reached. However, the rest of the days of the week, the prices fell to register a settlement price of €31.73/t on Friday, January 15, 9.1% lower than that of the previous Friday. These declines followed those of the gas prices. However, the absence of auctions until the end of the month could slow down the downward trend of the emission rights futures. 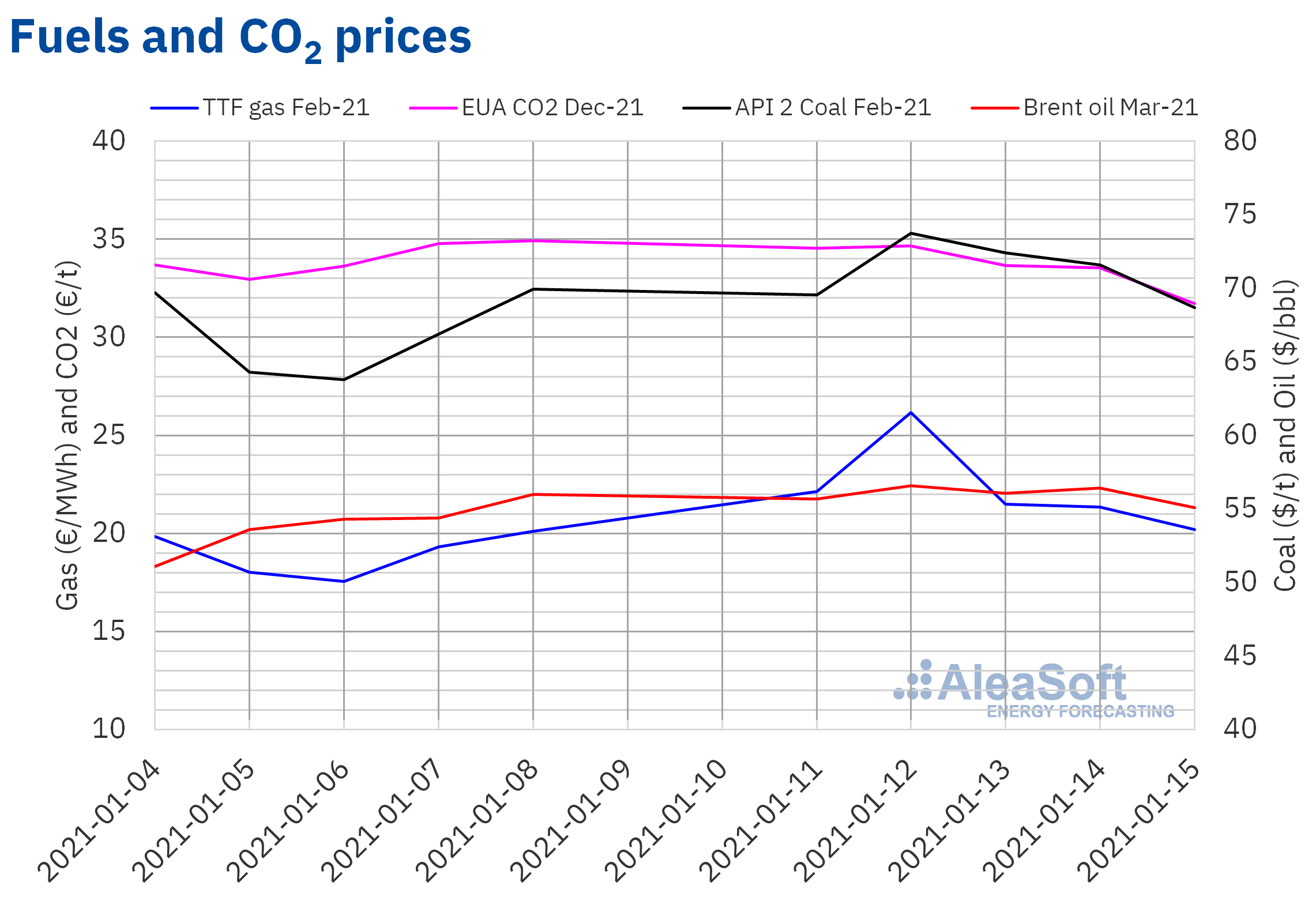 On January 14, the second part of the series of webinars organised at AleaSoft “Prospects for the energy markets in Europe from 2021” was held, this time with speakers from PwC Spain. In the webinar the importance of the green hydrogen for the decarbonisation of the economy was highlighted and, according to the experts, its production is expected to create a floor in the electricity markets prices and avoid a large part of the curtailments. The recording of the webinar can be requested through this link or writing to webinar@aleasoft.com. The next part of this series of webinars will be held on February 18 with the participation of guest speakers from Engie and later, on March 18, the fourth part will be held with the collaboration of speakers from EY (Ernst & Young).

At AleaSoft, reports on the prospects for the European electricity markets in the mid and long term are made, in which the recovery from the economic crisis caused by COVID‑19 and the impact that the green hydrogen production, the batteries, the growth of the renewable capacity and the development of the electric vehicle, among others, will have on the electricity markets prices are taken into account.