AleaSoft Energy Forecasting, September 19, 2022. In the third week of September, European electricity markets prices fell in a generalised way, continuing the trend of the two previous weeks. The drop in gas prices was once again one of the causes of these declines, to which this time was added the increase in wind energy production and the decrease in demand in most markets. On the 16th and 17th there were hours with prices equal to or less than €10.00/MWh, and even negative, in some markets.

During the third week of September, the solar energy production decreased compared to the previous week in all markets analysed at AleaSoft Energy Forecasting. The smallest drop was 2.9% and was registered in the French market. In the Italian market it fell by 7.6%, in Germany by 20% and in the Iberian Peninsula by 32%.

For the fourth week of September, the AleaSoft Energy Forecasting’s solar energy production forecasting indicates an increase in production in Germany and Spain, while little variation is expected in the Italian market. 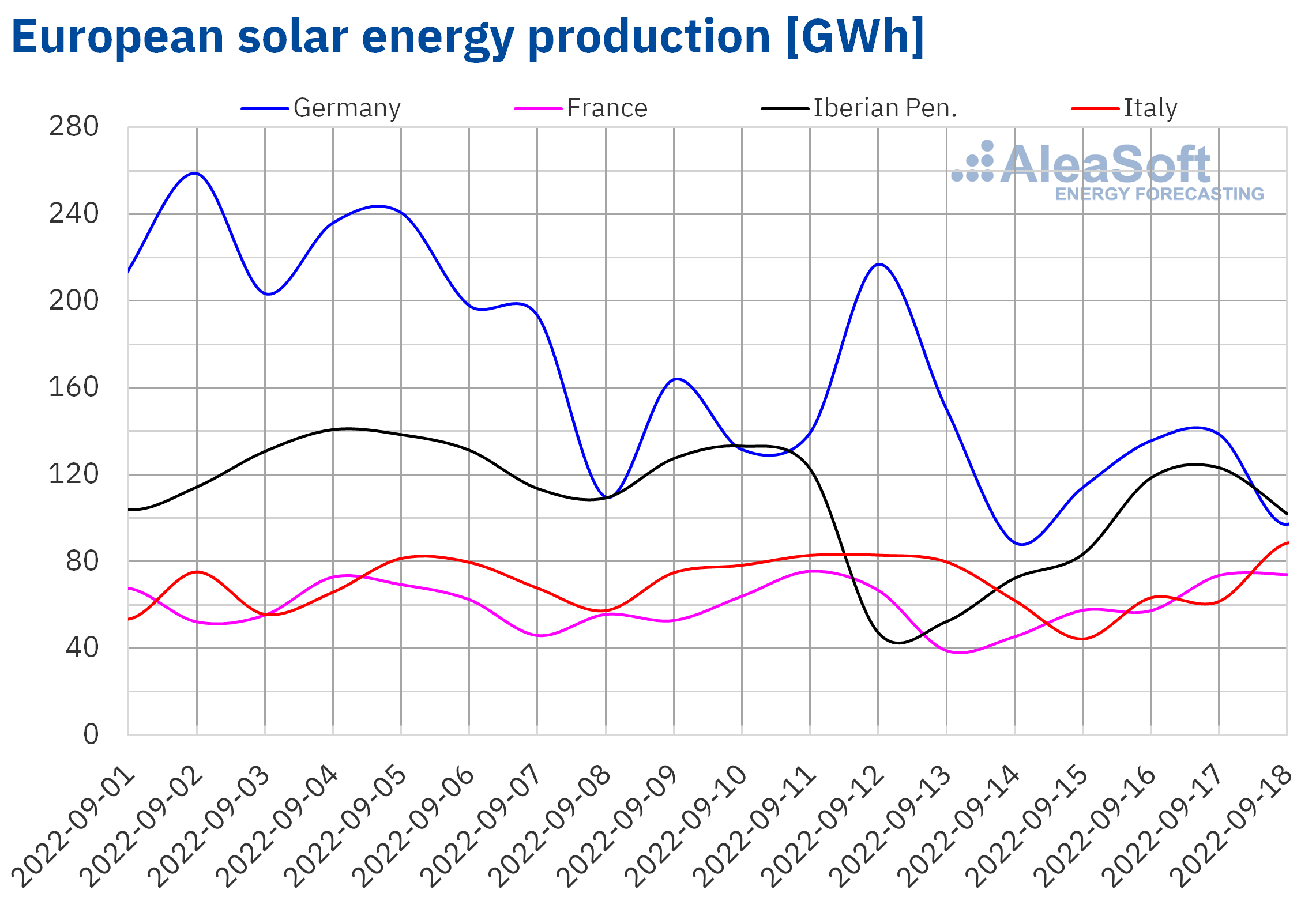 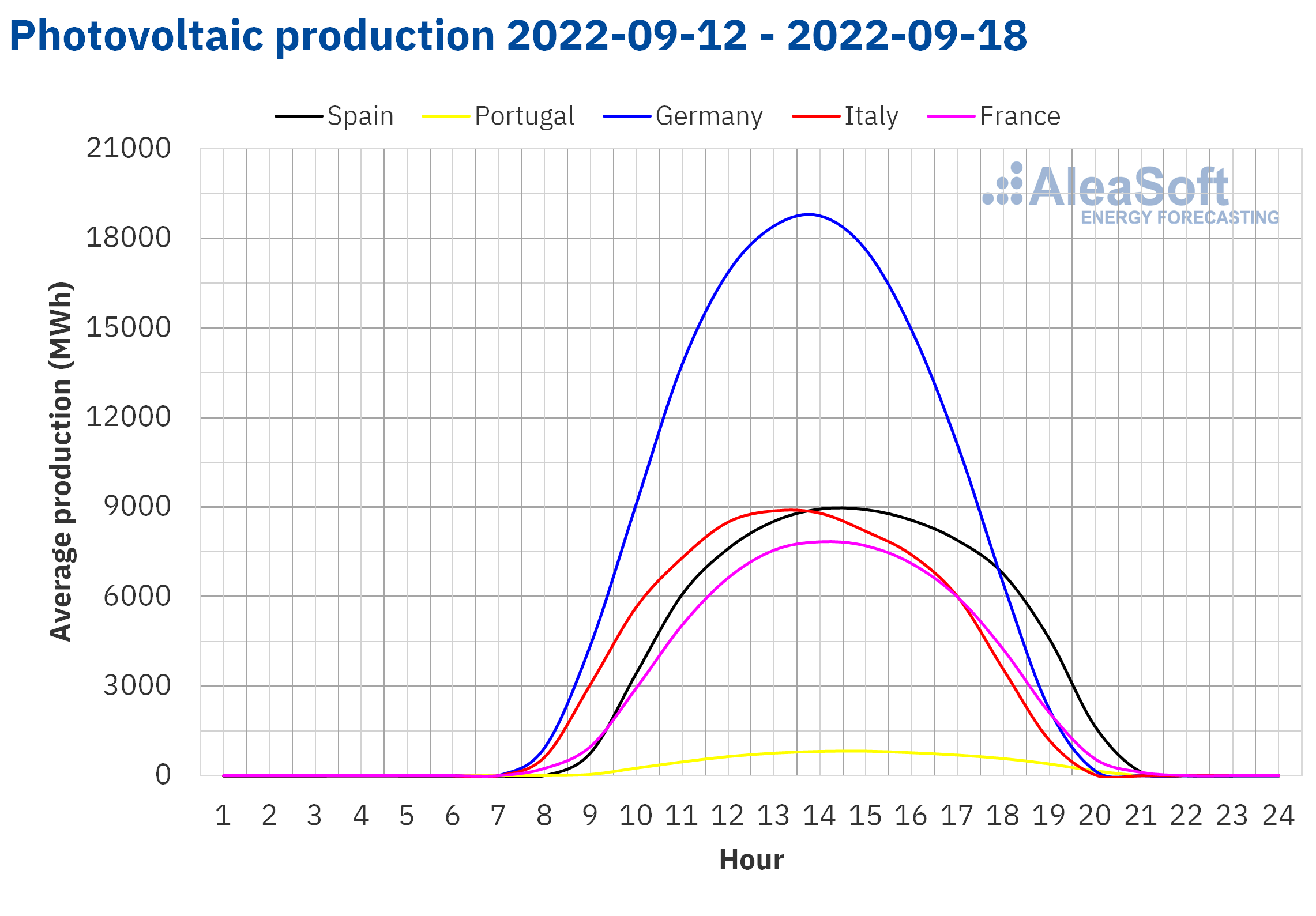 During the week of September 12, the wind energy production increased by 83% in the German market, 47% in the Iberian Peninsula and 34% in the Italian market, compared to the previous week. Among the markets analysed at AleaSoft Energy Forecasting, the exception was the French market, in which the production with this technology reduced by 25%.

For the week of September 19, the AleaSoft Energy Forecasting’s wind energy production forecasting indicates a reduction in all analysed markets. 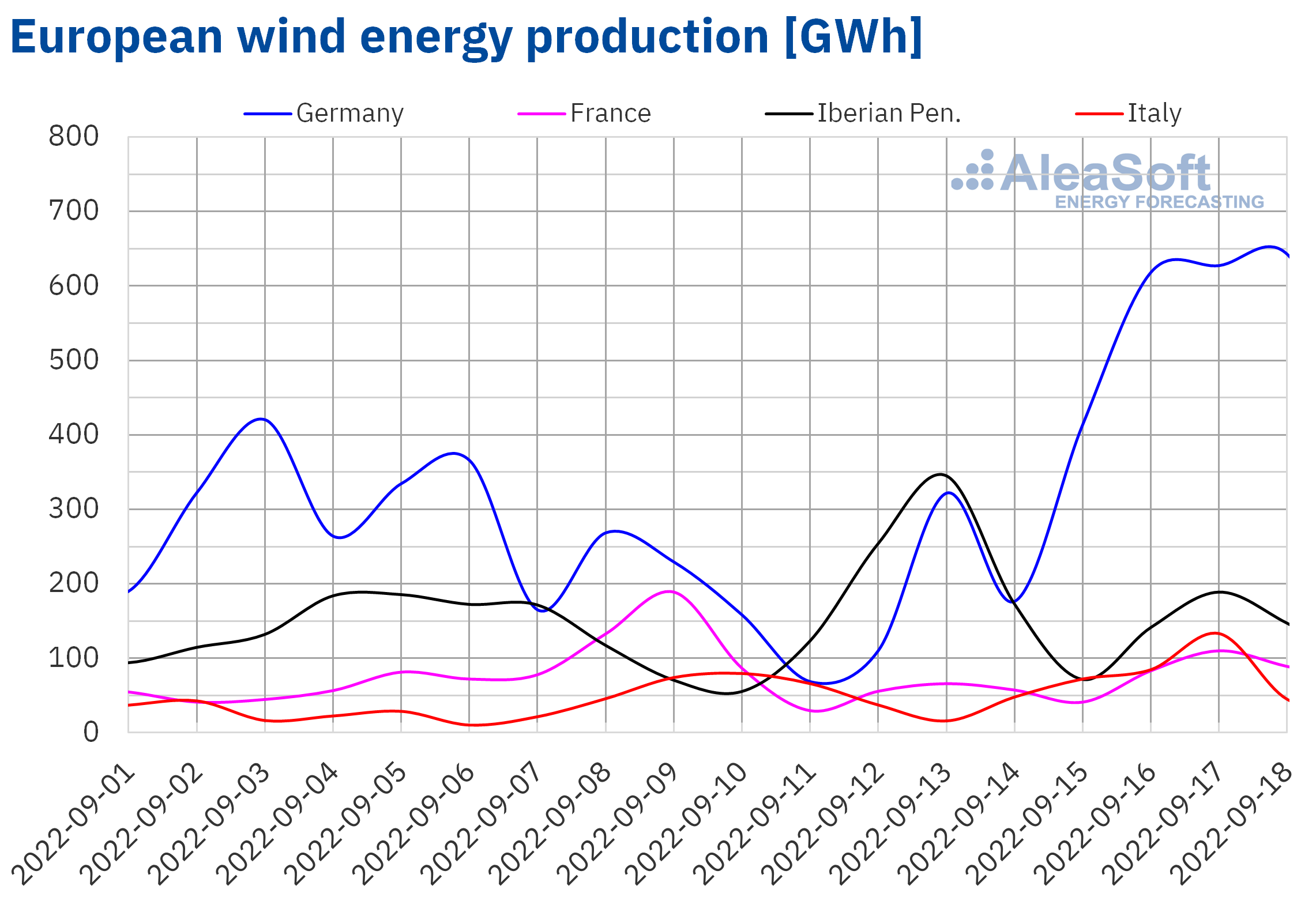 In the third week of September, the electricity demand decreased in most of the analysed European electricity markets compared to the previous week. The largest decrease was registered in the market of the Netherlands, which was 4.5%, followed by the 3.9% decrease in the Portuguese market and the 2.1% decrease in the Italian market. In the markets of Great Britain, Spain, Belgium and France the falls were between 1.1% of the British market and 0.1% of the French market. The general drop in temperatures favoured the drop in demand in most European markets during the week of September 12. The exception was the German market, where the demand increased by 0.5%. 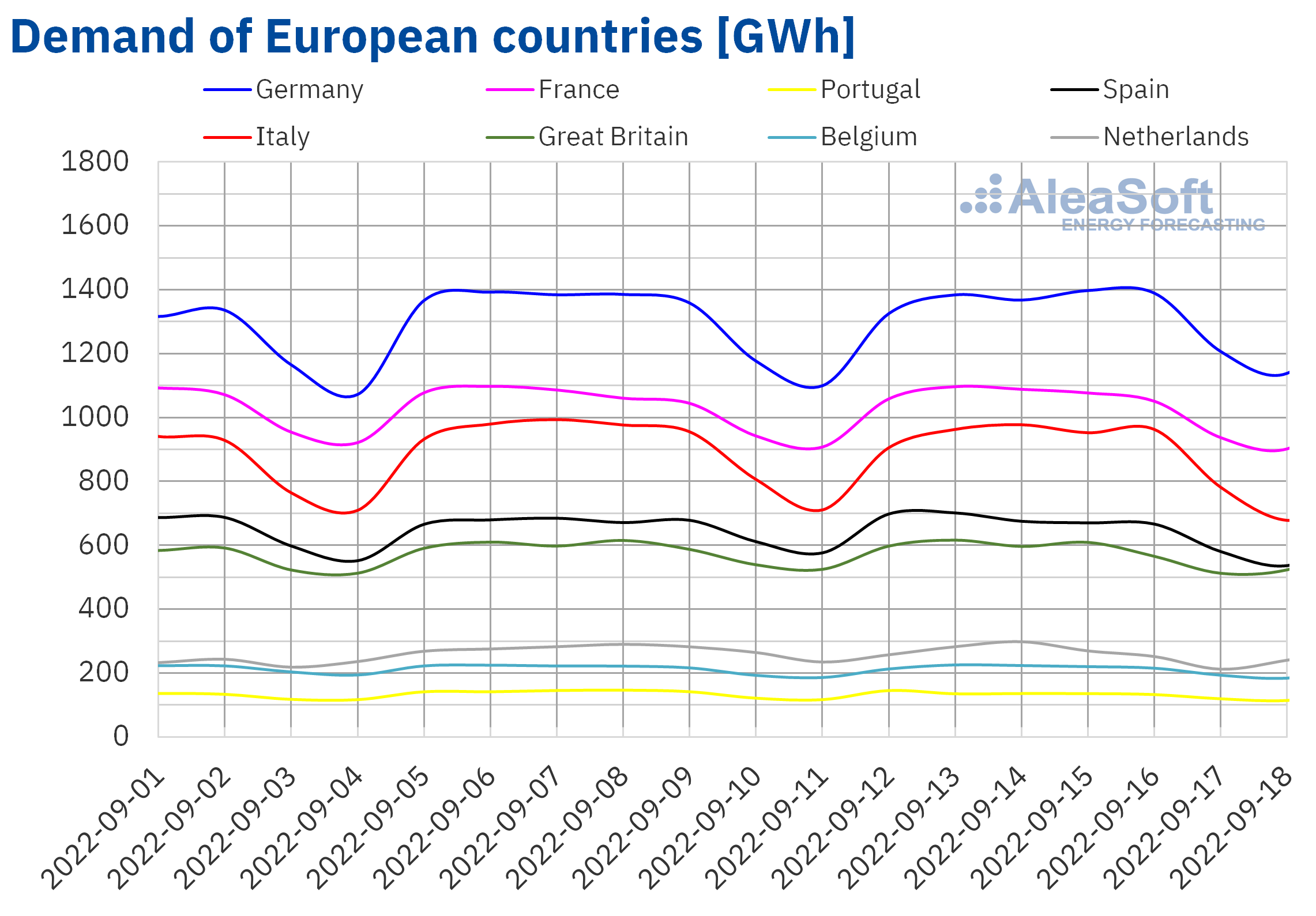 Although the MIBEL market prices were the lowest due to the gas price cap applied in this market, part of the consumers must pay a higher price as compensation for this gas price limitation. In the Spanish market, the average of this price was €255.10/MWh in the week of September 12, a value 3.2% lower than that of the previous week.

Regarding hourly prices, on Saturday, September 17, between 11:00 and 12:00, an hourly price of €10.00/MWh was reached in the Spanish and Portuguese markets. This price was the lowest since mid‑May in the MIBEL market. On the other hand, in the afternoon of September 16, two hours were registered with a price of €0.00/MWh in the Dutch market and one in the Belgian market. But, the lowest hourly price, of ‑€9.06/MWh, was reached on September 17, from 14:00 to 15:00, in this last market.

During the week of September 12, gas prices on average lower than those of the previous week favoured the decrease in European electricity markets prices. In addition, the wind energy production increased in almost all markets, while the demand fell. 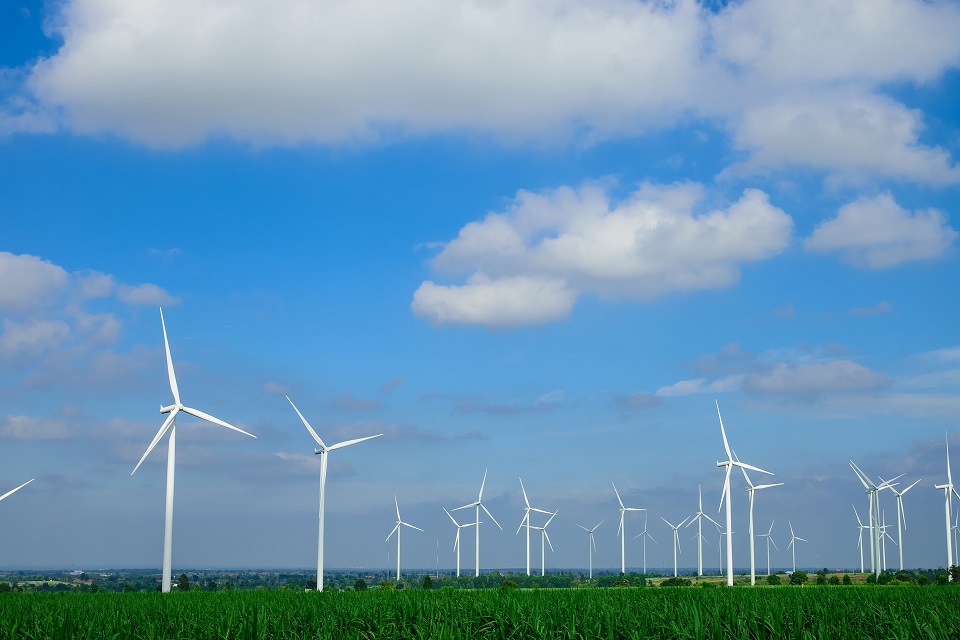 The AleaSoft Energy Forecasting’s price forecasting indicates that in the week of September 19 the prices of some European electricity markets, such as the German or the Iberian markets, might increase influenced by the general decrease in wind energy production. 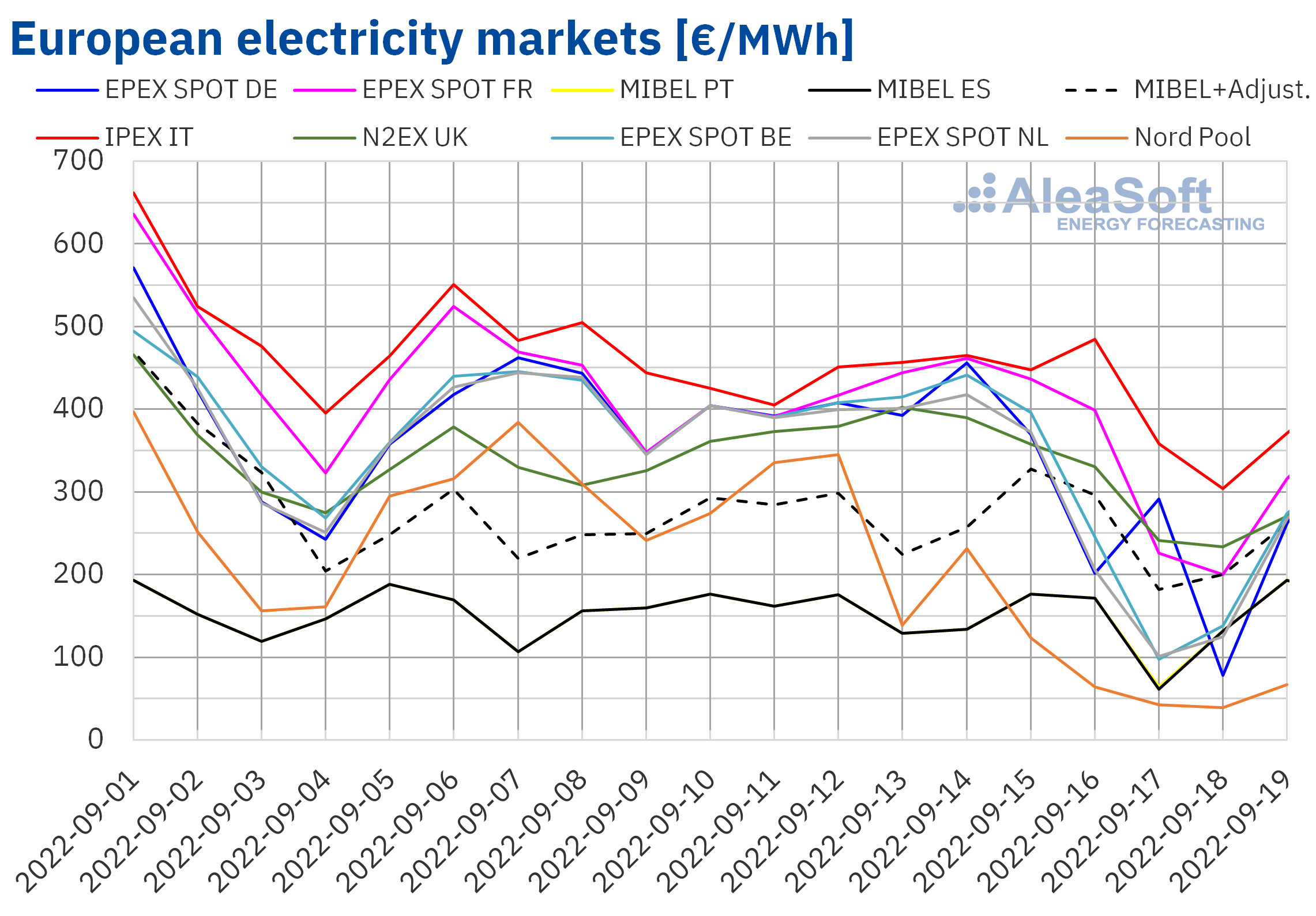 Electricity futures prices for the next quarter in the markets analysed at AleaSoft Energy Forecasting registered a predominantly downward behaviour, if settlement prices of September 16 are compared to those of the 9th of the same month. The exceptions were the NASDAQ market of the Nordic countries, in which the largest percentage increase, of 9.4%, was registered, while in absolute terms, the EEX market of France had the largest increase, of €65.51/MWh. The EEX market of the United Kingdom also registered increases, in this case of 3.5%. In the rest of the markets, prices fell, the most pronounced drop being that of the ICE market of the Netherlands, of 7.3%. The EEX market of Italy was the one with the lowest variation in prices, with a slight drop of 0.5%.

As for the product of the year 2023, the behaviour was fundamentally on the rise. In the analysed period, only the prices of the EEX market of Germany and the ICE market of the United Kingdom fell, with decreases of 1.2% and 2.5% respectively. In the rest of the markets, prices increased, with the 9.3% rise registered in the ICE market of the Nordic countries being the highest of those analysed. The OMIP market of Spain and Portugal registered the smallest variations, with increases of 1.0% in both cases.

Settlement prices of Brent oil futures for the Front‑Month in the ICE market, during the third week of September, ranged between $90.84/bbl of Thursday, September 15, and $94.10/bbl of Wednesday, September 14. At the end of the week, on Friday, September 16, a settlement price of $91.35/bbl was registered. This price was 1.6% lower than that of the previous Friday, but 0.6% higher than that of Thursday. This rise from the previous day was influenced by fears about supply levels after a spill caused a disruption in the operation of an Iraqi oil terminal. However, the terminal recovered its activity on Saturday. Meanwhile, concerns about the evolution of the demand and the strength of the dollar continue to exert their downward influence on prices.

In the third week of September, forecasts of low temperatures, amid a situation of lower flows from Norway due to maintenance work, contributed to the increase in prices during the first days of the week. However, high gas prices are causing a decline in industrial demand and European reserves are already above the targets set for November 1, exerting their downward influence on prices. In the last part of the third week of September, moreover, flows from Norway increased, favouring the decreases in prices registered. Most of the maintenance work that is affecting gas flows from Norway might be completed by the end of September. 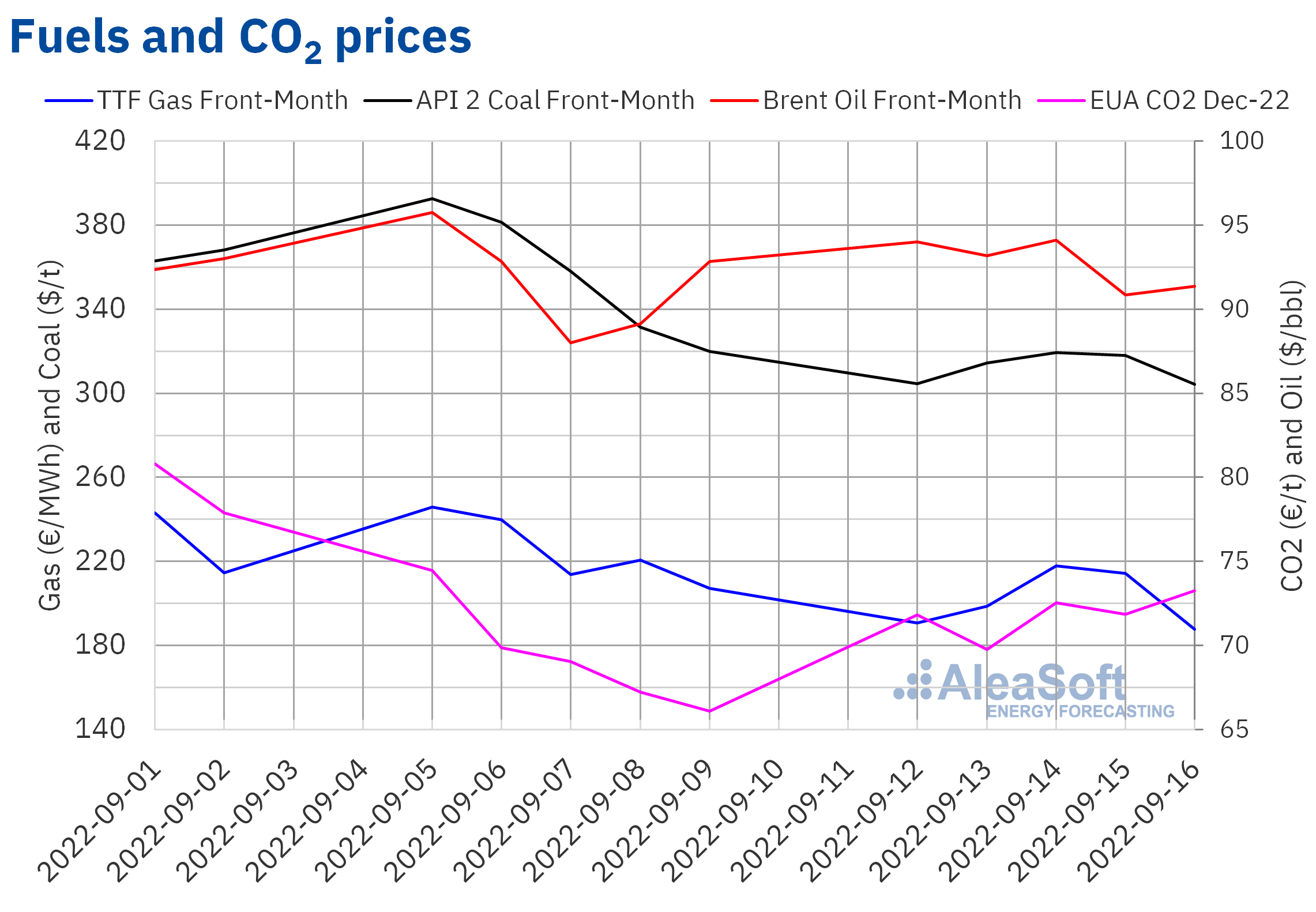 On September 15, the 25th edition of the monthly webinars of AleaSoft Energy Forecasting and AleaGreen was held, this time with the participation of Jorge Simão, COO at OMIP, and Pablo Villaplana, COO at OMIClear, who explained the situation of the Iberian electricity futures markets and the role of central clearing houses. Fernando Soto, Director‑General of the AEGE, joined the analysis table of the Spanish version of the webinar to talk about the auction of renewable energy PPA with electro‑intensive consumers that is scheduled to take place in the first quarter of 2023, as well as the critical situation in which the large consumers are due to the high energy prices. In addition, Oriol Saltó i Bauzà, Associate Partner at AleaGreen, analysed the evolution and prospects of European energy markets. The recording of the webinar can be requested on the AleaSoft Energy Forecasting website.

The next webinar will be held on October 20, again with speakers from Deloitte, as in every October edition since 2020. The webinar will be a new opportunity to analyse the current situation of the renewable energy projects financing and the importance of the forecasting in audits and portfolio valuation. As usual, the analysis of the evolution of the European energy markets will also be carried out on dates in which, depending on the weather conditions, the markets might already be in a critical situation due to the scarcity and uncertainty of the gas supply from Russia.