AleaSoft, March 1, 2021. The average price of most of the European electricity markets exceeded €45/MWh in February, increasing year‑on‑year but decreasing compared to January, similarly to the demand and in line with the variations in wind energy production. However, the MIBEL market remained below €30/MWh. MIBEL did not have the lowest monthly price in Europe since March 2014. On the other hand, the CO2 and the Brent futures registered record prices during the month.

The solar energy production increased in all European electricity markets in February compared to January 2021, in correspondence with the progressive increase in hours of sunshine. The largest increase was registered in the German market, with 258%. In Italy, France and Spain significant increases were also registered, of 84%, 60% and 34%, respectively. In the case of Portugal, the increase was 5.7%.

However, if the solar energy production of February is compared with that of the same month of the year 2020, it only increased in Germany, by 24%, and in France, by 1.2%. In the rest of the markets, the production with this technology fell, with Portugal leading the falls with 15%. 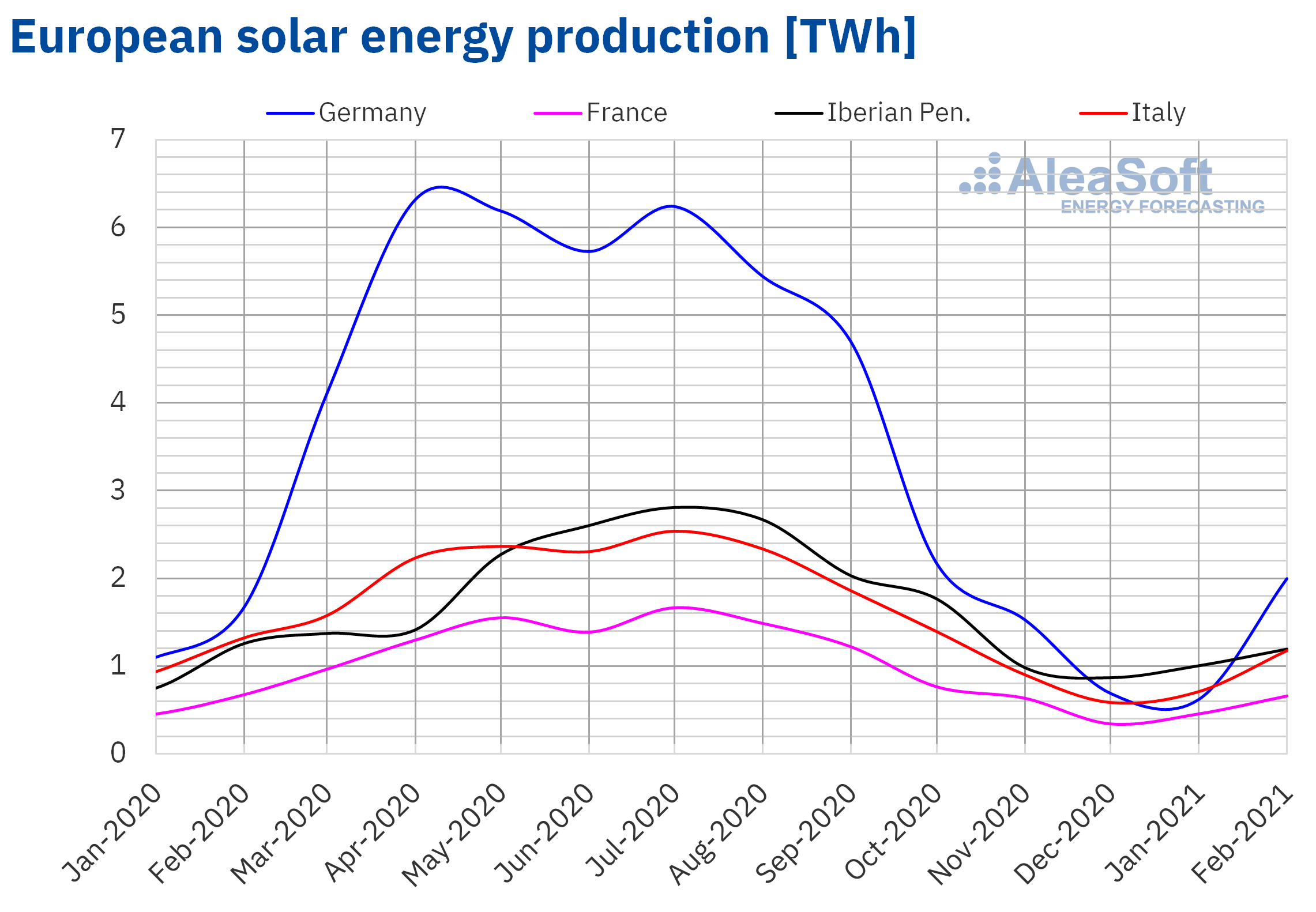 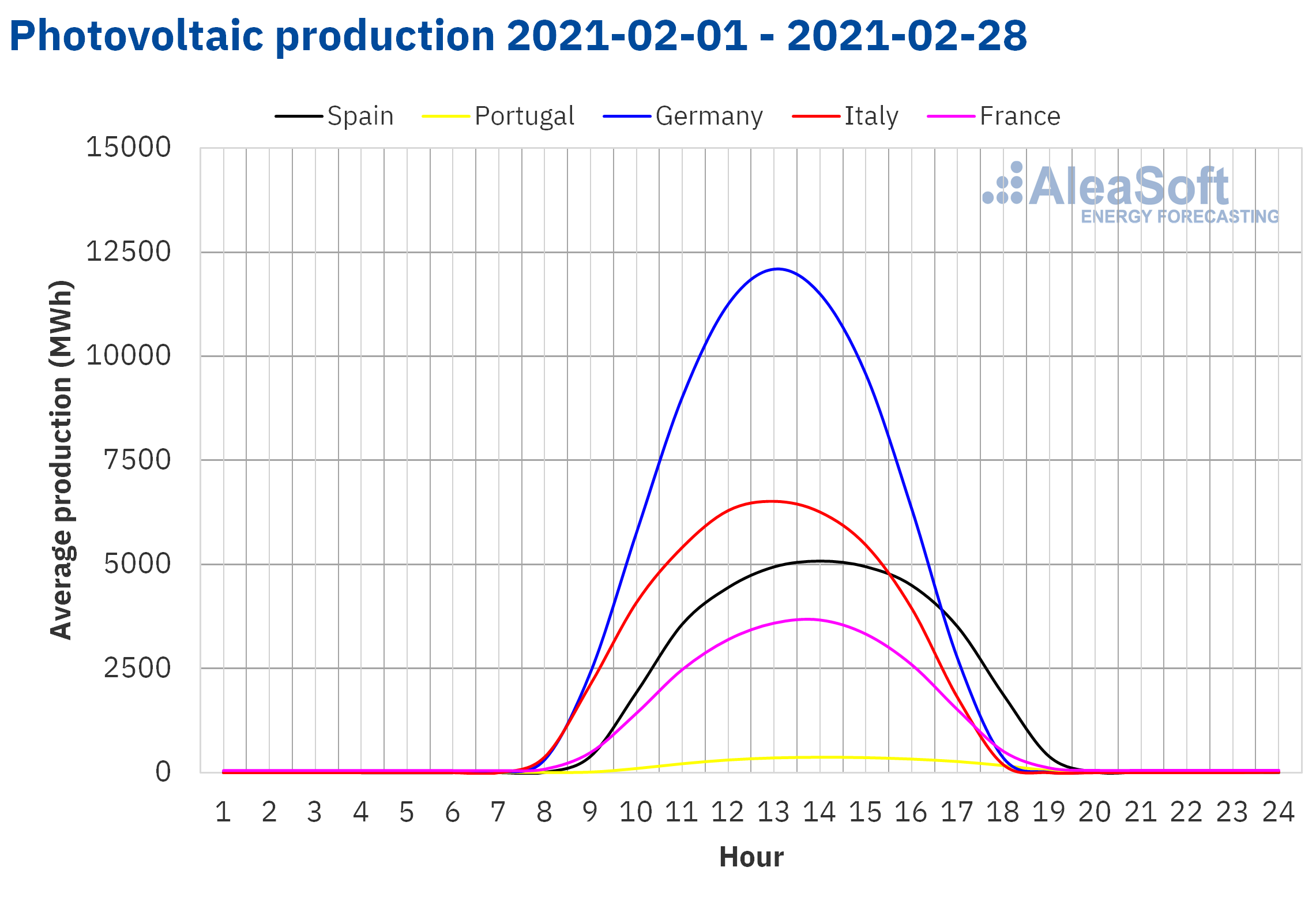 Regarding the wind energy production, in February 2021 it increased compared to January in most markets. The variation registered in France, of +17%, was the highest of the analysed markets. However, in Italy and Spain, the production with this technology fell by 30% and 2.8% respectively. 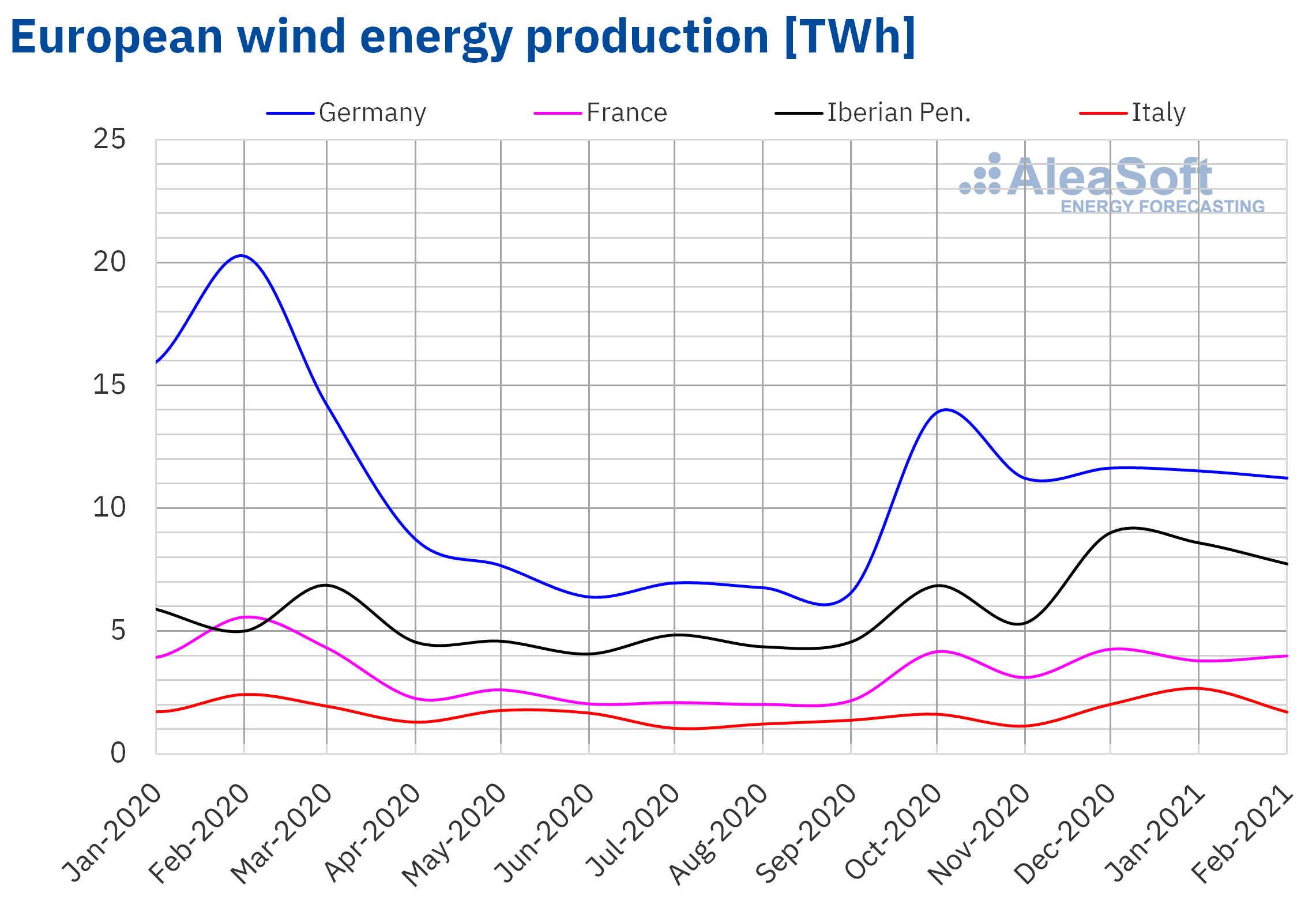 On the other hand, in the comparison between the first two months of 2021, the demand decreased in February in most European markets. The rise in average temperatures, which was up to 4.0 °C in Spain and Portugal, was the main factor in the decrease in demand. Precisely, the Portuguese market registered a decrease in demand of more than 10%, as did the French market. As for the increases, the markets of Germany and Italy registered rises lower than 2.0%. 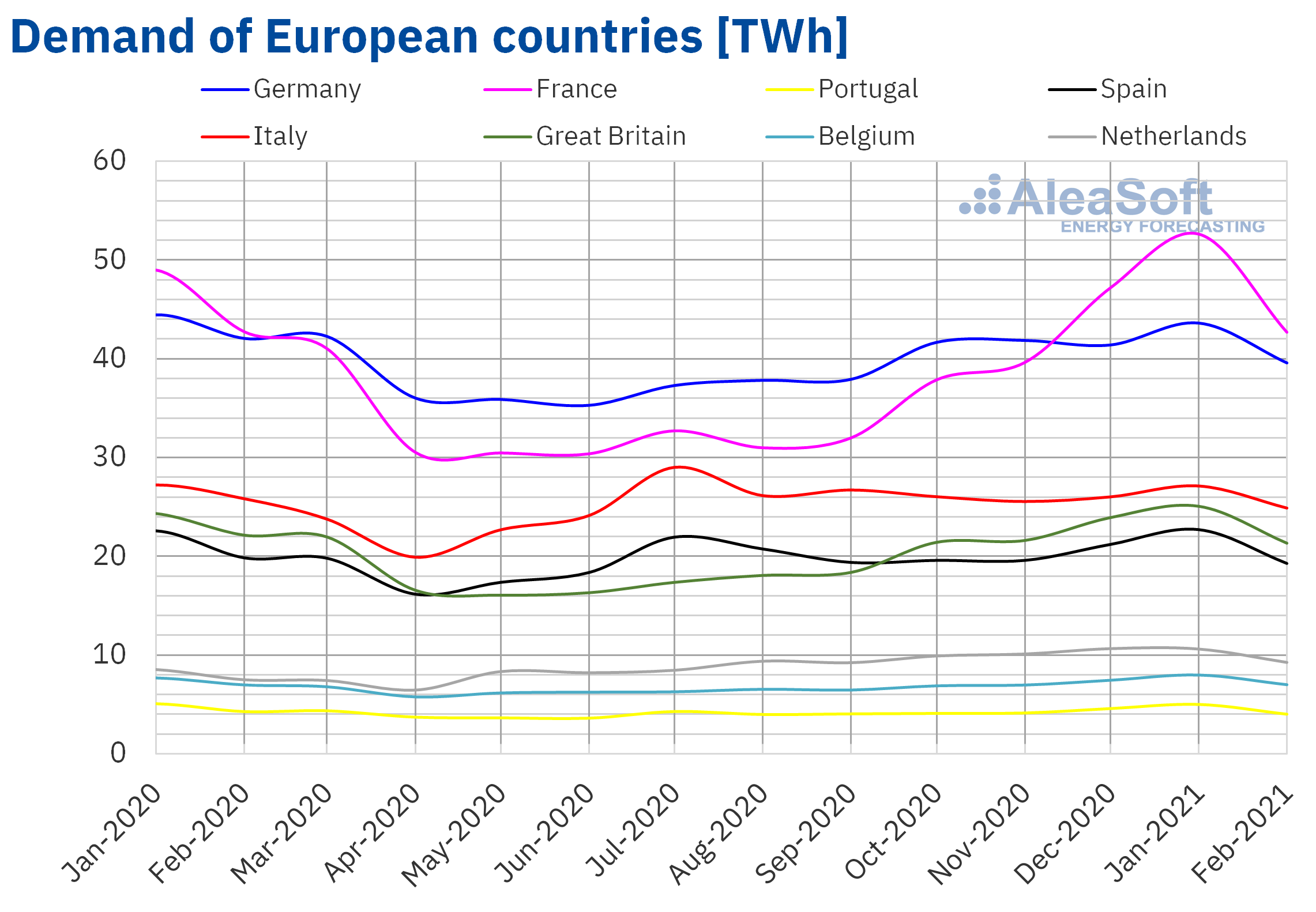 In February 2021, the monthly average price was above €45/MWh in almost all the European electricity markets analysed at AleaSoft. The exception was the MIBEL market of Portugal and Spain, with averages of €28.19/MWh and €28.49/MWh, respectively, positioning itself as the market with the lowest average price in Europe, something that did not happen since March 2014. On the other hand, the highest monthly average price, of €62.32/MWh, was that of the UK N2EX market, followed by that of the IPEX market of Italy, of €56.57/MWh. In the rest of the markets, the averages were between €46.84/MWh of the Nord Pool market of the Nordic countries and €49.23/MWh of the EPEX SPOT market of the Netherlands.

Compared to the month of January 2021, in February, the average prices fell in all the European electricity markets analysed at AleaSoft, except in the Nord Pool market. In this market there was an increase of 2.2%. On the other hand, the largest price drops were registered in the MIBEL market of Portugal and Spain, which were 54% and 53% respectively. The drop in prices in the British market, of 31%, was also important. The rest of the markets had price decreases between 6.8% of the Italian market and 18% of the French market.

However, if the average prices of last February are compared with those registered in the same month of 2020, there were significant price increases in almost all markets. In this case, the exceptions were the Spanish and Portuguese markets, with decreases of 21% and 22% respectively. As for the price increases, the Nord Pool market and the EPEX SPOT market of Germany had the largest price increases, of 258% and 122% respectively. On the other hand, the lowest price increase, of 44%, occurred in the Italian market. In the rest of the markets, the price rises were between 67% of the Netherlands and 87% of France.

On the other hand, during almost the entire month of February, the lowest daily prices were those of the MIBEL market of Spain and Portugal. On Saturday, February 20, the minimum daily prices were reached, of €2.19/MWh in Spain and €2.02/MWh in Portugal. The hourly prices of that day were lower than €1/MWh for twelve hours in Spain and for thirteen hours in Portugal. However, the lowest hourly price in the MIBEL market, of €0.00/MWh, was that of the first four hours of Wednesday, February 10, in Portugal. A price like this was not reached in the Portuguese market since February 2016. 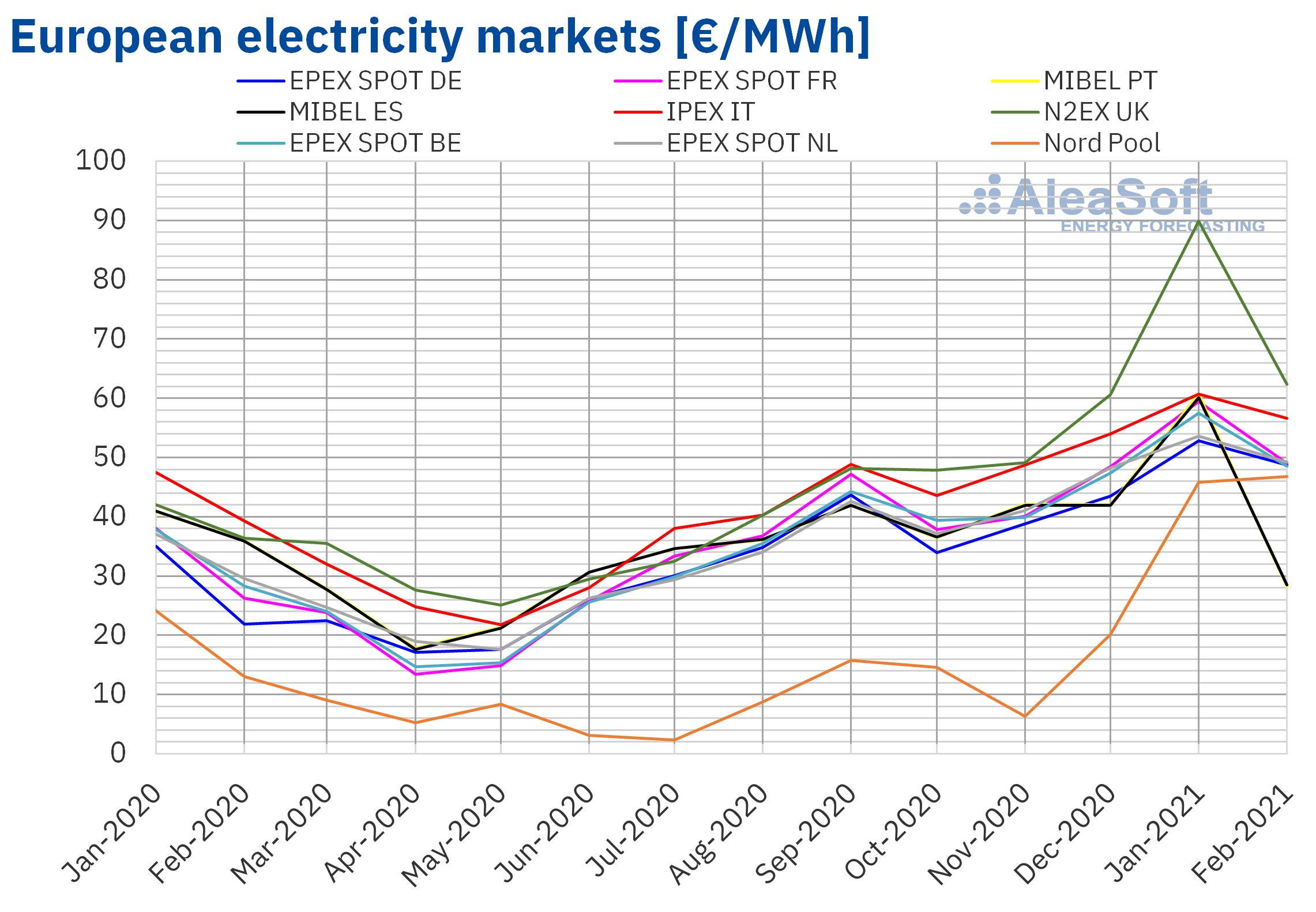 The recovery of the temperatures compared to the previous month favoured the decrease in electricity markets prices in February. In addition, the solar energy production in Europe was also higher than in January and the wind energy production increased in countries such as Germany, France or Portugal, also contributing to the decline in prices. Another factor that favoured this decline was the decrease in gas prices. 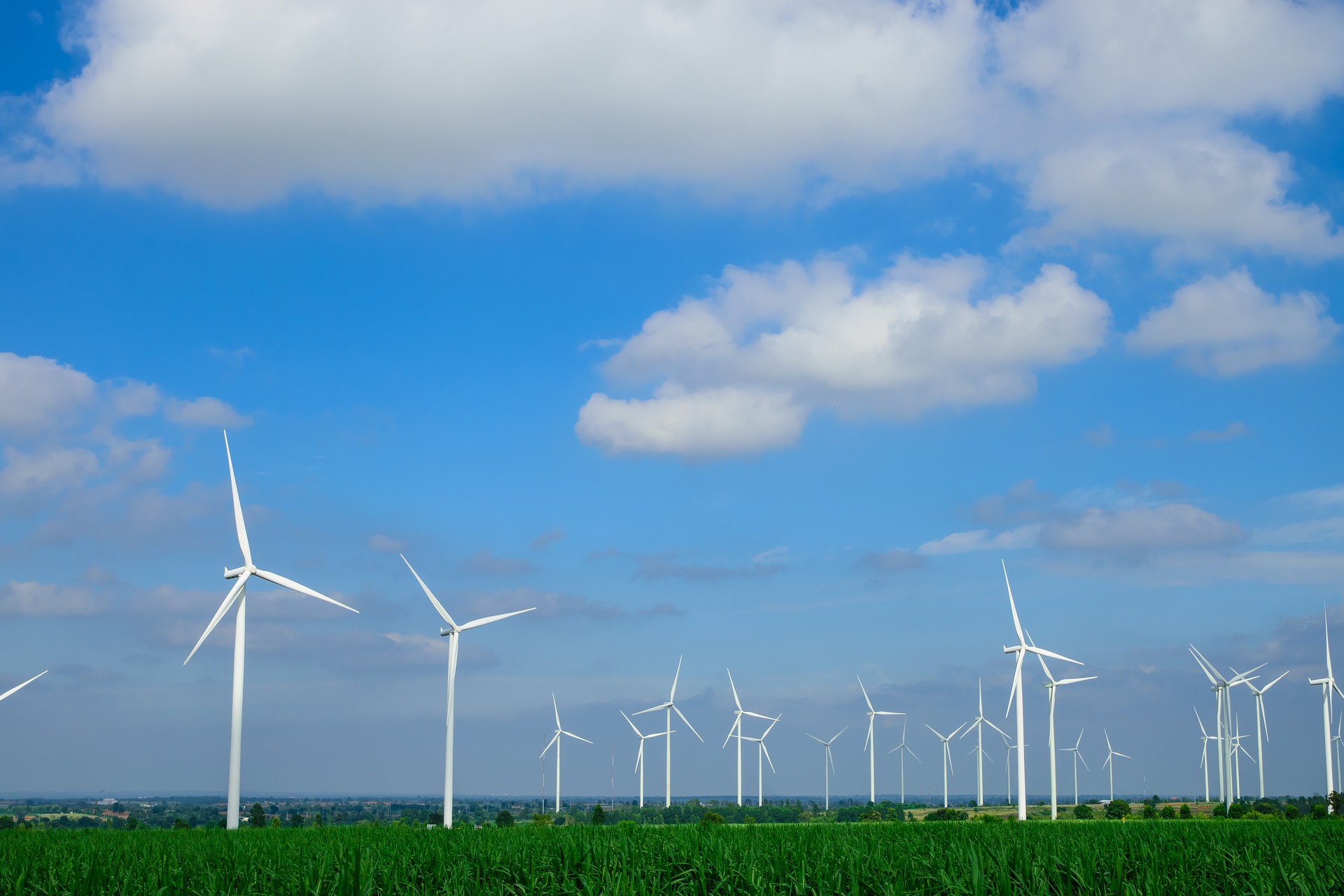 The electricity futures prices for the second quarter of 2021 rose in the EEX market of Germany between the first and the last session of February, while they fell in the rest of the markets analysed at AleaSoft. The EEX market of Germany registered an increase of 1.8%. In the rest of the markets, the prices fell, led by the Nordic countries in the ICE and NASDAQ markets, where in both cases the drop was 21%.

In the case of the futures prices for the next year 2022, the behaviour of the markets was generally upward, if the settlement prices of the sessions of February 1 and February 26 are compared. The prices were only reduced in the Nordic region, with a drop of 0.5% in the ICE market and 0.7% in the NASDAQ market. In the rest of the markets analysed at AleaSoft, the increases were between 1.2% of the EEX market of Spain and 6.7% of the EEX market of Germany.

The advances in vaccinations against COVID‑19 and the expectations regarding the measures to support the economy of the United States Government favoured the increase in prices in February. On the other hand, Saudi Arabia and the major oil countries continued to cut their production, in addition to the low temperatures reducing the US production levels, also contributing to the price increases.

In the coming days, the evolution of the Brent oil futures prices will be influenced by the OPEC+ meeting to be held on Thursday, March 4, in which an increase in production from April could be agreed.

Regarding the average value registered during the month of February, this was €17.46/MWh. Compared with that of the futures for the month M+1 traded in January 2021, of €20.40/MWh, the average decreased by 14%, favoured by the recovery of the temperatures. If compared with the M+1 futures traded in February 2020, when the average price was €9.11/MWh, there was a 92% increase.

On the other hand, it is noteworthy that, after that the average price in the Spanish MIBGAS gas market in January was almost €8/MWh higher than that of the spot TTF gas, in February, with an average of €16.82/MWh, it stayed below the TTF gas, something that happened on a few occasions in the history. 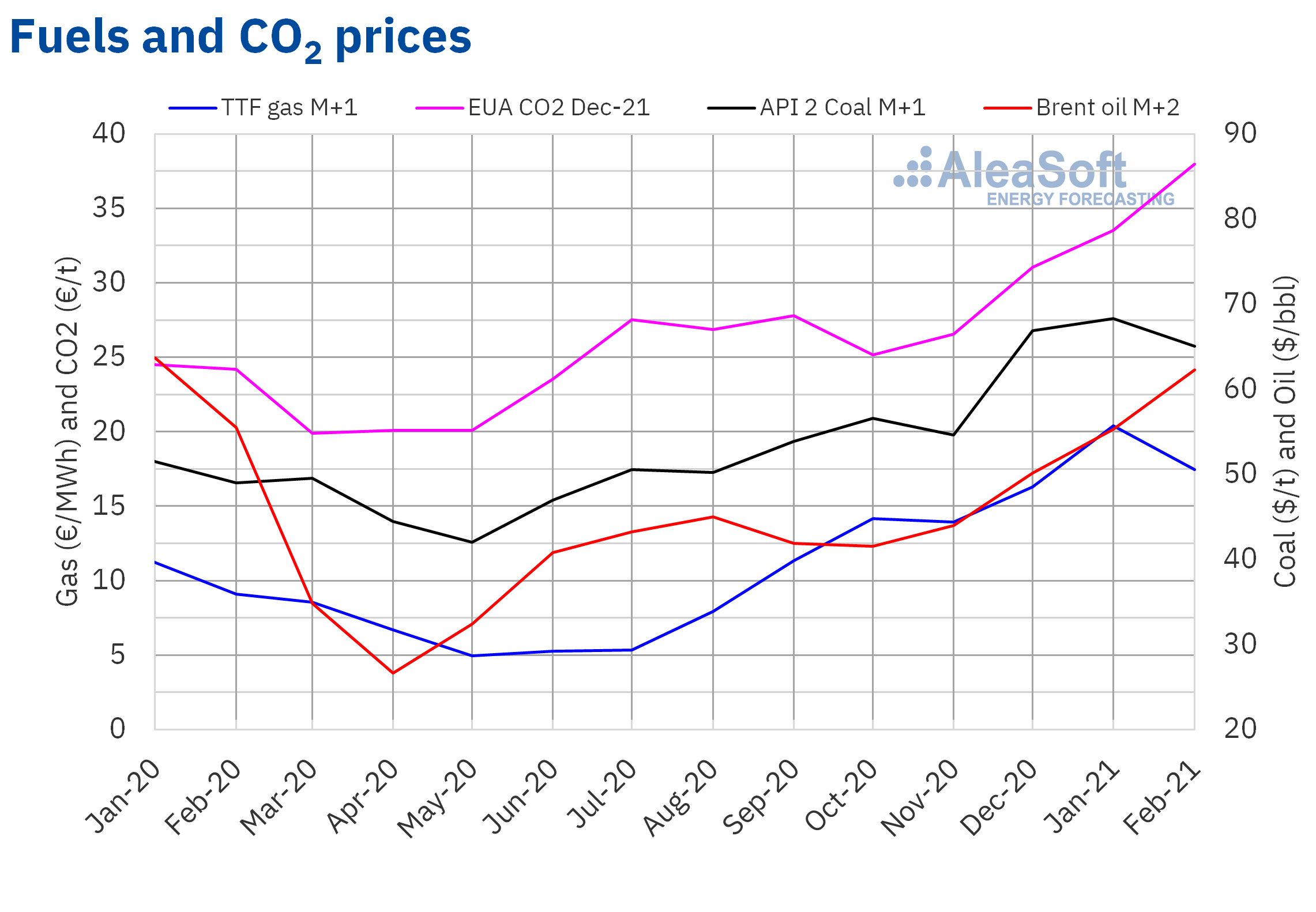 At AleaSoft the webinar “Prospects for the energy markets in Europe. Spring 2021” that will be held on March 18 is being organised. In the webinar, which will feature the participation of speakers from EY (Ernst & Young), in addition to analysing the prospects for the markets in the spring 2021, the financing of renewable energy projects, the importance of the PPA, the main novelties in the regulation of the energy sector and the business opportunities abroad will be discussed.

At AleaSoft, mid‑term European electricity markets prices forecasts are made, which provide a vision of the prospects for the coming months and years, taking into account the most up‑to‑date scenarios for the evolution of the economy. In addition to the hourly forecasts for the next three years, a forecasts with stochasticity report is available, which includes the probability distributions of the monthly, quarterly and yearly products included in the forecast horizon and a monthly simulations report that includes 1000 simulations of prices.

In a complementary way to the forecast reports, the Alea Energy DataBase (AleaApp) is a tool that compiles the data of the main variables of the energy markets, facilitating their visualisation and the analysis of their historical evolution.