AleaSoft, August 19, 2019. The prices of the main European electricity markets fell the just-ended week compared to the week of August 5, with the exception of the EPEX SPOT market in Germany where prices rose. According to the analysis carried out in AleaSoft, the decrease in electricity demand favoured the decrease in the prices of the continent. On the other hand, the production with renewable energies, such as wind and solar energy, registered week-on-week descents in the analysed countries as a whole.

The Brent oil futures prices for the month of October in the ICE market fell below $59/bbl last week of August 12, as happened in the previous week of August 5, and settled on Friday, August 16, at $58.64/bbl. The settlement value of last Friday represented a 9.9% drop compared to the last day of July. The increase in US crude oil inventories announced last week favoured this decline. In the negotiation of this product, the risk of global economic deceleration caused by the trade war between the United States and China, as well as the production cuts established by OPEC+ and tensions between the West and Iran remain as important factors.

The TTF gas futures in the ICE market for the month of September settled again below €11/MWh last week and present a downward trend for almost a year. On Friday, August 16, they settled at €10.96/MWh, a value very close to their historical low of the last two years, of €10.48/MWh, produced just three weeks ago.

The API 2 coal futures prices in the ICE market for the month of September settled this Friday, August 16, at $57.15/t, 0.3% lower than the Friday of the previous week, on the 9th of August.

The CO2 emission rights futures in the EEX market for the December 2019 reference contract presented a downward trend during the past week, settling on Friday, August 16, at €25.97/t, its lowest value since the end of June. 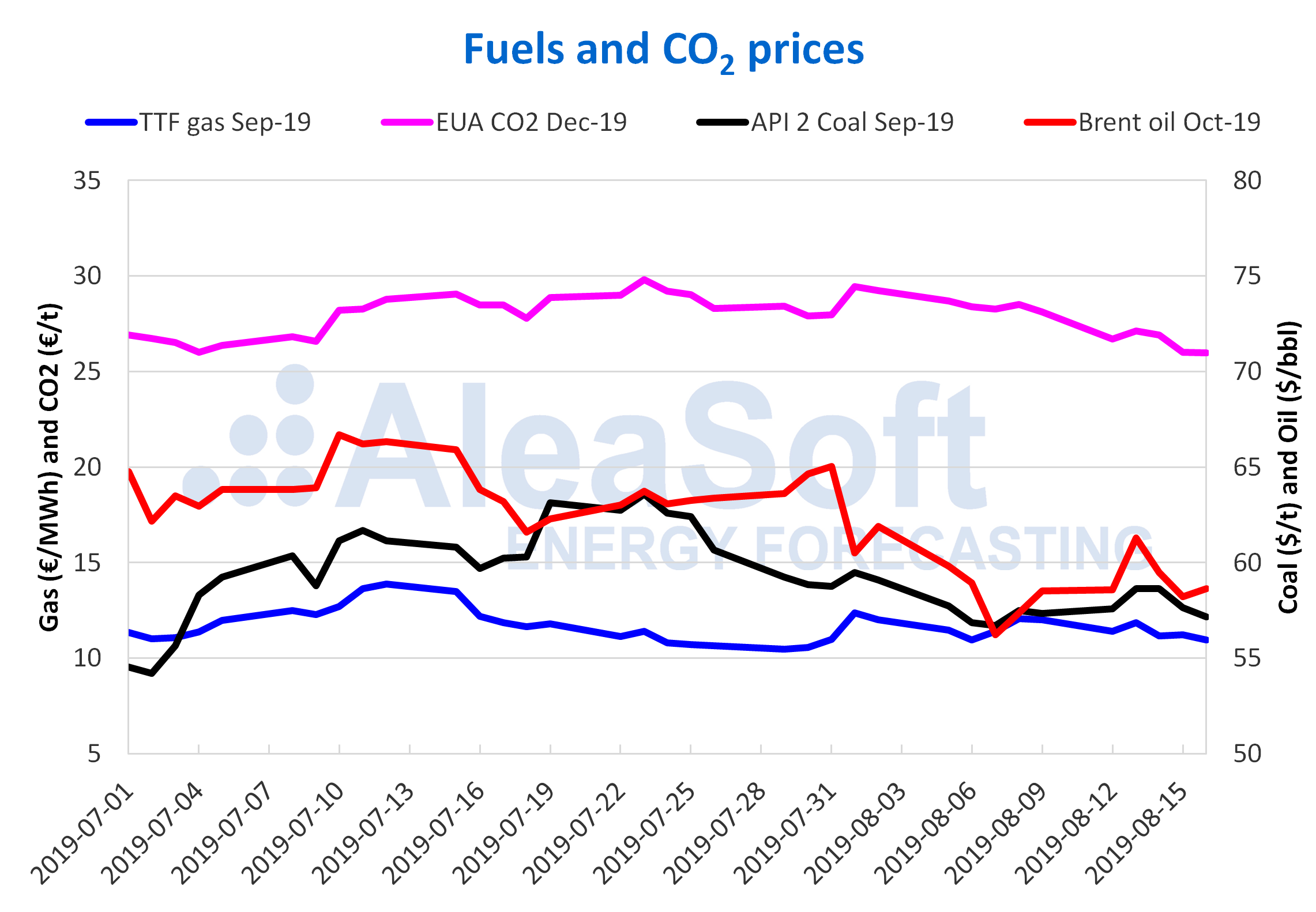 Last week, from August 12 to 18, the main European markets prices registered declines compared to the previous week, with the exception of the EPEX SPOT market of Germany in which prices rose 3.8%. In this way, the markets responded to a lower electricity demand in most of the analysed countries, thanks to the week-on-week decrease in temperatures and the effect of the holiday on August 15 that enjoyed several countries on the continent.

The biggest falls were in the markets that normally have the highest prices in Europe, the IPEX market of Italy, with -14%, and the MIBEL market of Spain and Portugal, with -10%, positioning both between €40/MWh and €45/MWh last week. The other market that is generally in the group of markets with the highest prices in Europe, the British N2EX, decreased -1.0% in the analysed period and, although it began the week with prices close to those of that group, at the end of the week, it was closer to the prices of the markets with lower prices. The Nord Pool market of the Nordic countries and the EPEX SPOT market of Germany, France, Belgium and the Netherlands still are in the group of markets with lower prices, which last week were between €28/MWh and €35/MWh.

Last week, which culminated on August 16, presented a significant drop in electricity futures for the next quarter of 2019 in almost all markets in Europe. Only the Nordic countries, both in the ICE market and in the NASDAQ market, had a different behaviour, with increases of 1.1% and 1.2% in each market respectively. In the rest of the markets and countries, the decreases were on average of -4.1%, with values between -3.0% and -5.0%. The maximum decrease of -5.0% occurred in two cases: for the futures of France in the EEX market and for the futures of Italy in the GME market. This last market was the one with the greatest change in absolute terms, because when settled on Friday, August 16, at €58.14/MWh, it left a difference of €3.06/MWh compared to the previous Friday.

As for the electricity futures for next year, the markets had a more homogeneous behaviour. No European market registered price increases in this product. Only the Italian GME market stood at €60.60/MWh while the rest of markets registered declines compared to the previous week. The differences in the price of this product, in the markets that registered changes, range from -1.7% in the case of the Nordic countries futures in the ICE market to -4.1% in the France’s futures in the EEX market.

Wind energy production fell last week in several of the main producers in Europe. In Germany the fall was -1.7%, and in the Iberian Peninsula it was -11%. On the other hand, in Italy and France, the generation with this technology recovered, registering an increase of 24% and 10% respectively. At AleaSoft it is expected that this week wind energy production in Spain will increase and that in the rest of the aforementioned countries it will be reduced compared to the values of the last week. 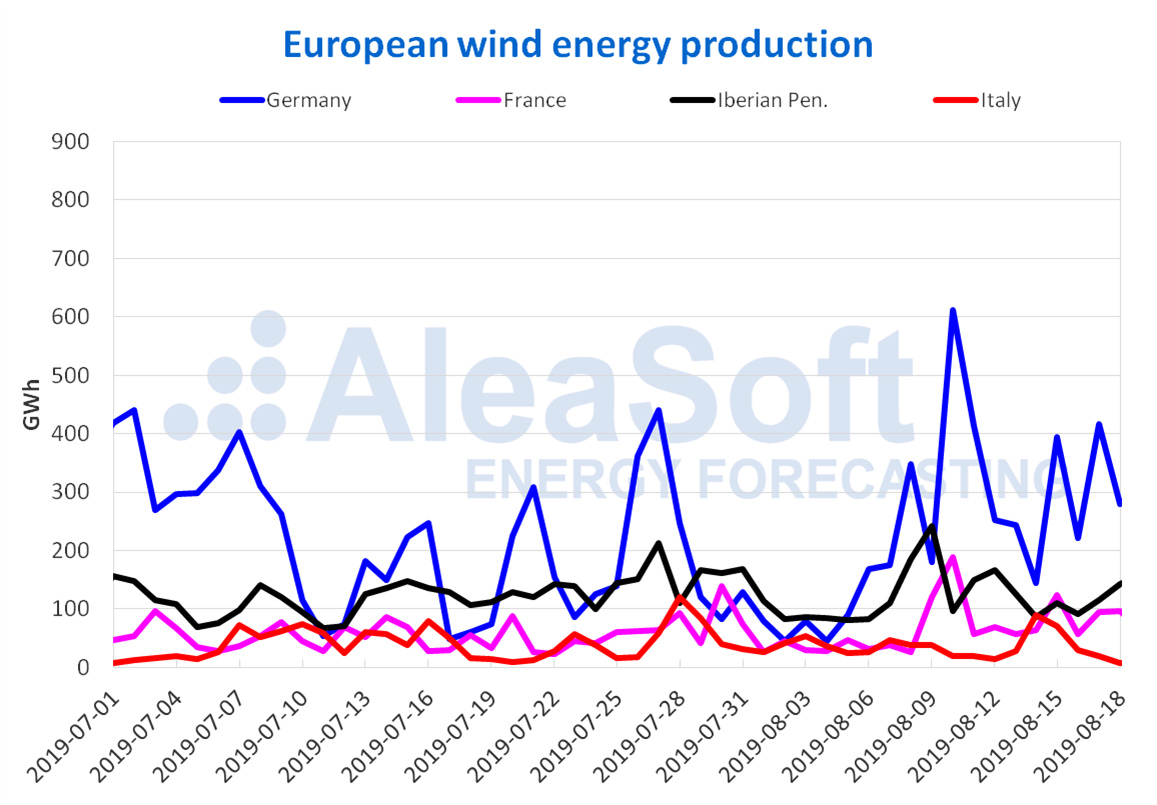 The biggest increase of the last week in solar energy production, which includes photovoltaic and solar thermal, was recorded in Spain, with 9.3%. On the other hand, in Germany there was a decrease of 6.8% and in Italy a rise of 3.5%. The analysis carried out in AleaSoft indicates that these countries will have a contrary behaviour during the course of this week; that is to say, in Germany the production is expected to rise compared to last week in Spain and it should fall in Italy. 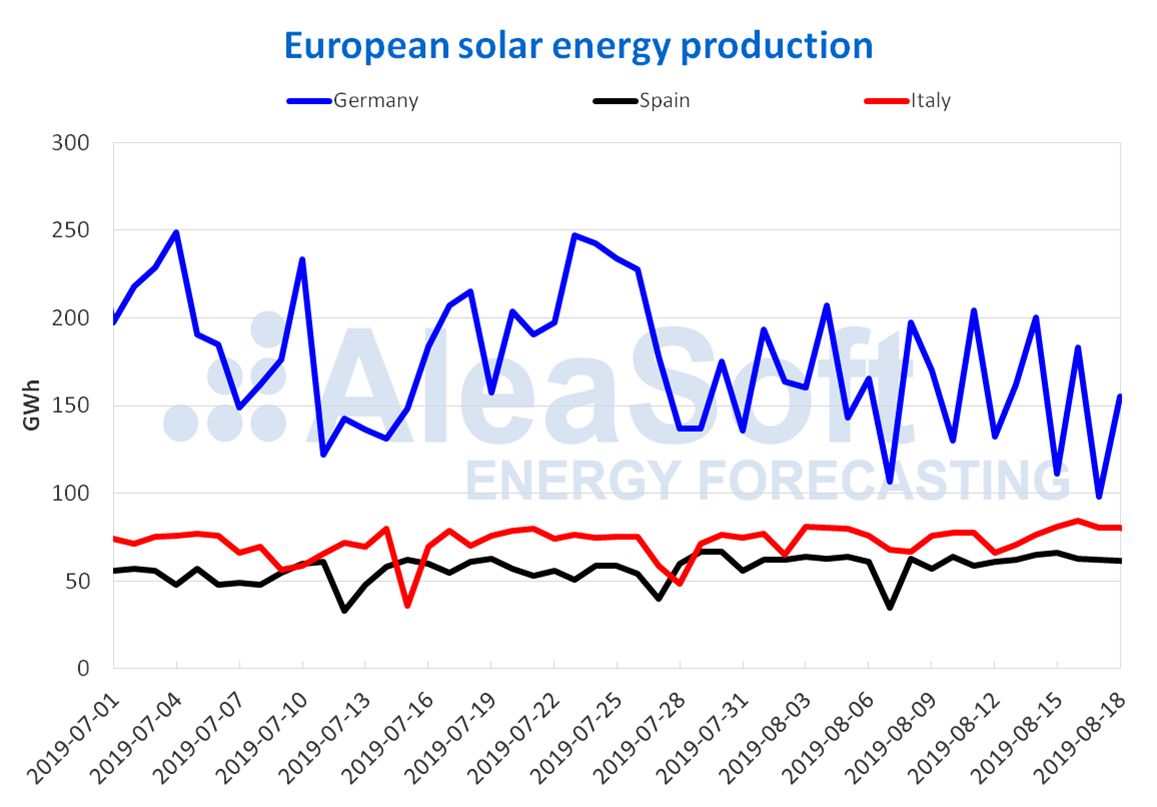