The price of the MIBEL market of Spain and Portugal continues to fall this week after last week registered a 10% decrease compared to the previous week. In the first four days of this week, between August 19 and 22, the average price was €40.90/MWh and the decrease over the same period last week was -5.4%. According to the analysis carried out at AleaSoft, the increase in wind energy production, to the detriment of electricity production in coal-fired and combined cycles plants, favoured the decrease in prices. During the first three days of this week, wind energy production in mainland Spain increased by 44% compared to the average production with this technology recorded between Monday and Wednesday of last week. In this same period, coal-fired energy production decreased by -44% and combined cycles energy production by -1.8%. Another factor that led to the decline in prices in the Iberian market is the price of the French market in EPEX SPOT, which this week was the lowest in Europe.

In the group of markets with the highest prices in Europe, MIBEL and the N2EX market of Great Britain have had prices around €40/MWh this week. In the British market, the average price so far this week fell by 10% in a cross-weekly comparison. The other market that belongs to the group of markets with higher prices, the IPEX market of Italy, this week was the one with the highest price in the continent with values ​​around €46/MWh. As a novelty this week, on August 20 and 21, the EPEX SPOT markets of Germany and the Netherlands, normally in the group with the lowest prices in Europe, approached to the lower part of the group with higher prices, reaching values ​​close to €40/MWh. On the other hand, the prices of the EPEX SPOT markets of France and Belgium and the Nord Pool market were around €35/MWh between August 19 and 22. 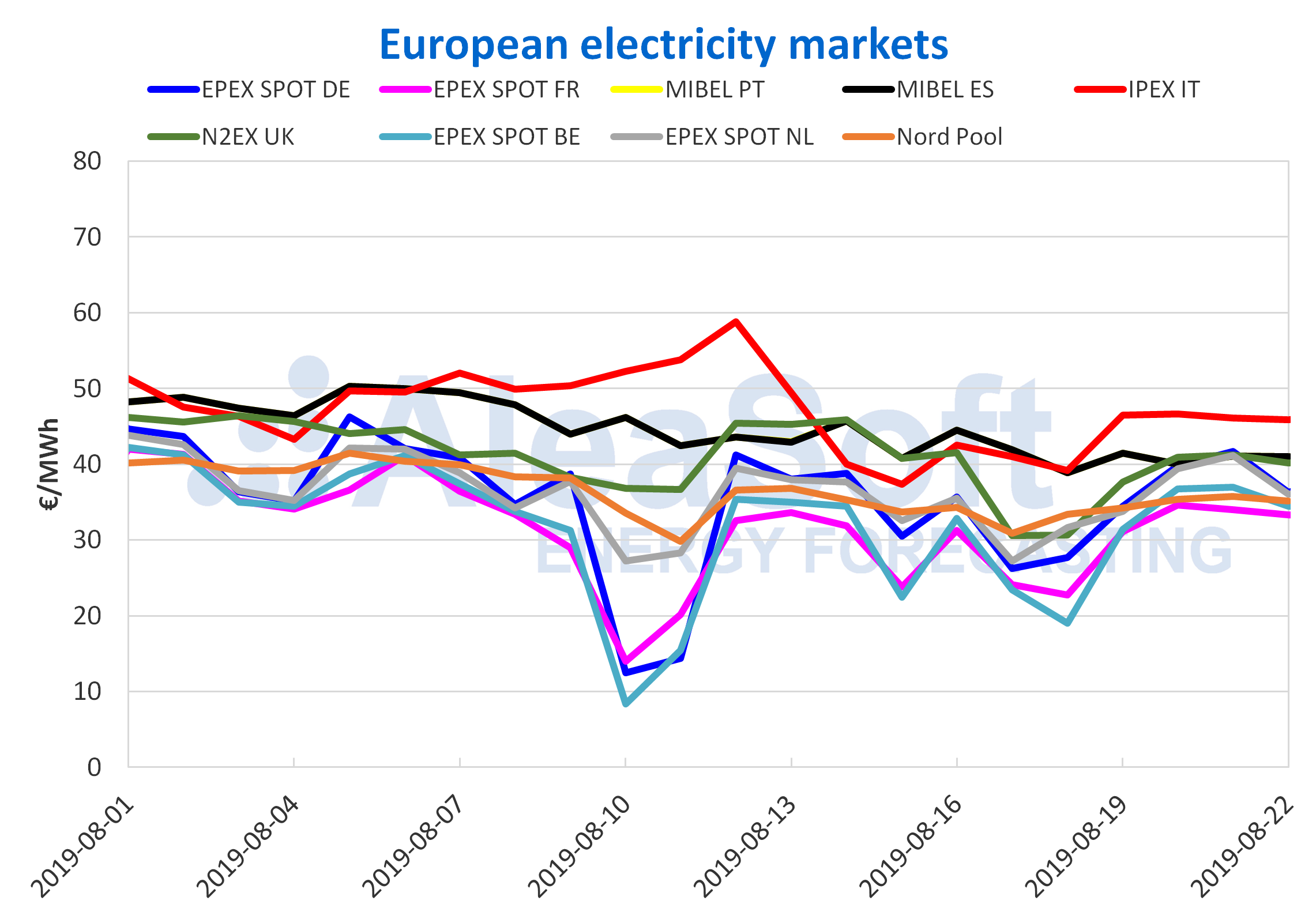 The prices of Brent oil futures for the month of October in the ICE market had a clearly increasing trend for the first time this month. Yesterday, August 21, they settled at $60.30/bbl. In this market, several factors have influenced this week: the decrease in US crude oil inventories, which was greater than expected, the production cuts that the OPEC+ group continues to practice, the global economic slowdown and the escalation of the war trade between the United States and China.

The TTF gas futures in the ICE market for the month of September have remained at around €11/MWh. A slight comeback in the last three sessions placed them yesterday at €11.41/MWh.

For its part, the API 2 coal futures for the month of September in the ICE market continue to decline continuously since last August 14. The settlement price in the session of yesterday, August 21, was $55.50/t.

The prices of CO2 emission rights futures in the EEX market for the December 2019 reference contract have remained this week in the range of €26.00/t to €26.50/t.

The price of electricity futures of Spain for the fourth quarter of the current year continued its downward trend this week. This progressive fall in the prices of this product in the OMIP market began, after its last comeback, in early August. So far this week the price of the last quarter of 2019 reached its record minimum value in this market for more than a year. In yesterday’s session the price settled at €54.70/MWh. In the case of this same product in the EEX market, something very similar happened. A decreasing run since the middle of last month reached the minimum price that this product has had since September 2018: the settlement price was €54.77/MWh. As expected, the price of Portugal’s electricity futures in the OMIP market follows a behaviour almost identical to the price of Spain’s futures. In yesterday’s session the settlement price for the fourth quarter of 2019 was €54.89/MWh. This figure beats the minimum price record in more than a year that was set in the session of last Friday, August 16, by ten cents.

On the other hand, futures for the 2020 calendar year, both for Spain in the OMIP and EEX markets and for Portugal in the OMIP market, have not given so much to talk about. Their prices have kept oscillating around €56/MWh. This behaviour neutralises the apparent fall they presented last week, when in all cases the price was strictly decreasing throughout the week.

France’s electricity futures for the next quarter in the EEX market also remain being news. When settling at yesterday’s session at €51.99/MWh, the minimum record for more than a year was set. This product for France is making its steepest fall for a year, as it dropped more than €10/MWh in just over a month. For its part, the future for the next year of France also presents decreases in its price, settling in yesterday’s session at €49.89/MWh. However, although this price again breaks the €50/MWh barrier, it does not represent a significant record for the values ​​presented in recent months. The futures of Germany for next quarter settled in yesterday’s session at €44.50/MWh. This price is also the record for more than a year. This is not the case for futures for next year, which settled yesterday at €48.01/MWh, still with the downward trend that they show for some weeks, but without lowering the values ​​of a few weeks ago.

Since the beginning of this week, electricity demand in mainland Spain increased by 3.8% compared to the same period last week. This time the increase is due to the 0.7 °C rise in the average temperature. Logically, this week’s demand is expected to be higher than the one of last week due to the effect of the August 15 national holiday.

The average wind energy production from Monday to Wednesday was 57% above that recorded in the week of August 12. During the rest of this week, in AleaSoft it is expected that this recovery in the average level of production with this renewable source will be maintained.

In the case of solar energy production, which includes photovoltaic and solar thermal technologies, so far this week there was a fall of -12% in mainland Spain compared to the average production of last week. In AleaSoft it is expected that this downward trend will continue in the rest of the week.

The nuclear power plants this week have maintained a stable operation. This stability should be maintained in the coming weeks, as there are no scheduled stops at the short-term.

The hydroelectric energy production fell by -2.6% from Monday to Wednesday of this week compared to the same period last week. 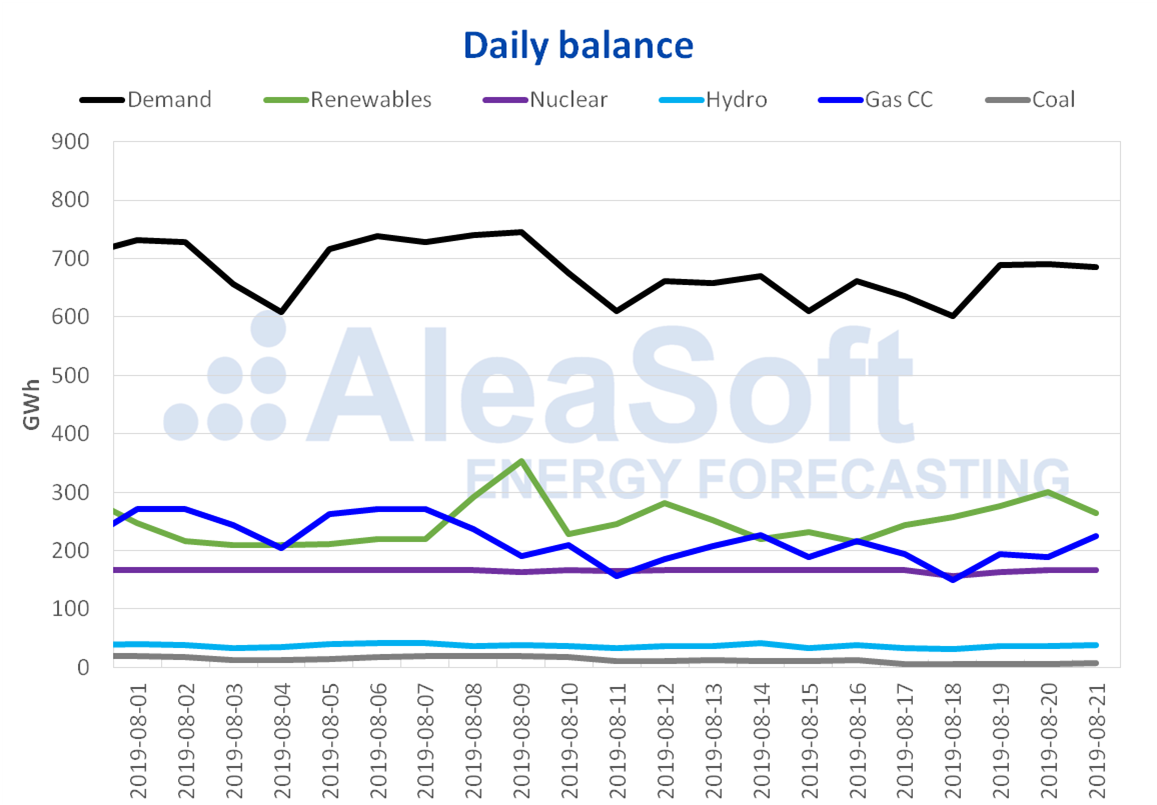 The level of hydroelectricity reserves is currently 9815 GWh, which represents 302 GWh less than the previous week. The current reserves constitute 42% of the total capacity of 23 281 GWh, according to data from the latest Hydrological Bulletin of the Ministry for Ecological Transition.