AleaSoft, August 8, 2019. The price of the MIBEL market rose in the first four days of this week, and it is the second market with the highest rise at European level. The increase in electricity demand, as well as the decrease in wind and solar energy production, boosted production with CCGTs this week. According to AleaSoft’s specialists, the combination of these factors explains the increase in market prices.

The average price of the MIBEL electricity market in Spain and Portugal between August 5 and 8 was €49.40/MWh, which represents an increase of 3.3% compared to the first four days of the previous week. With these values, the MIBEL market ranks second in terms of price increases in Europe this week. An analysis of the factors that led to this growth has been carried out by AleaSoft and it points to the increase in electricity demand, which in the case of Spain was 2.1% week-on-week, together with the decrease in renewable energy production such as wind and solar, which in Spain fell by 21% and 11% respectively so far this week, when compared to the average values of last week. This situation favoured the CCGT that, during the first three days of the week, increased their production by 21% week-on-week.

In the rest of Europe there was no homogeneity in the evolution of prices in the first four days of this week compared to the same days of last week. Prices also rose in other markets such as the Nord Pool of the Nordic countries and the EPEX SPOT markets of France and the Netherlands, the latter being the largest growth, with 3.4%. In the rest of the markets, prices fell in this week, with the EPEX SPOT market of Germany leading the declines with a 10% drop. 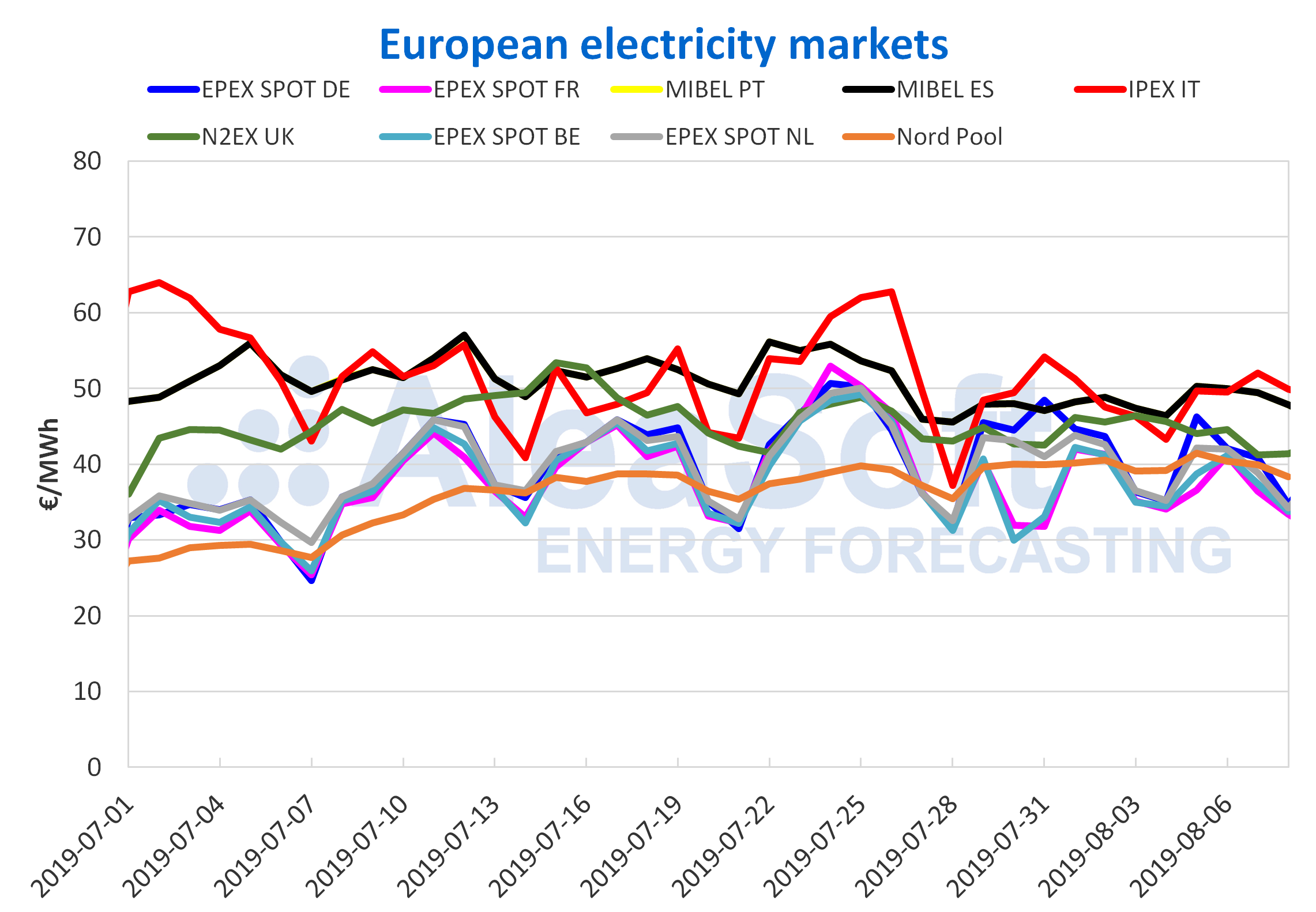 The Brent oil futures prices for the month of October in the ICE market continue trading downward since Wednesday, July 31. Since that day, the price had felt by 14% after settling yesterday, August 7 at $56.23/bbl. It was the minimum value in seven months, which in turn is $16.08/bbl below its maximum value this year, reached in April. The unexpected increase of 2.4 million barrels in US crude oil reserves joined the resurgence of tensions between the United States and China that are influencing the settlement prices of this product since last week.

The TTF gas futures in the ICE market for the month of September were traded upwards in the middle of last week, exceeding €12/MWh on Thursday, August 1. This week they fell below €11.50/MWh and settled on Wednesday, August 7, at €11.41/MWh.

The API 2 coal futures prices in the ICE market for the month of September resumed the downward trend they started in July 23 and settled on Wednesday, August 7, at $56.70/t, its lowest value since July 3. This product recorded a drop of almost $7/t in just sixteen days.

The CO2 emission rights futures prices in the EEX market for the December 2019 reference contract stood above €27/t since July 10, although since August 1, when they settled at €29.45/t, they are declining and yesterday, August 7, they settled at €28.28/t.

The price of electricity futures in Spain for the fourth quarter of the current year had a downward trend. In fact, in the OMIP market this product matched its lowest record of €56.65/MWh, a figure that was reached on June 19 and represents the minimum value in more than nine months. In the case of this same product in the EEX market there were also significant price declines, but still 23 cents above its minimum value in this same period. This is the case of the settlement price on Tuesday, August 6, €56.78/MWh, which was very close to the lowest price of the last nine months, €56.55/MWh reached on June 20. In the case of Portugal, the electricity futures price for the last quarter of 2019 in the OMIP market had behaviour identical to that of Spain’s futures, but with different figures. In this case, the price of €56.84/MWh was reached as of yesterday, August 7. This price is also the minimum since November 2018 and was also reached, as for the minimum in Spain, on June 19, 2019.

On the other hand, for the electricity futures for next year, both in the OMIP and EEX markets for Spain and in the OMIP market for Portugal, the price behaviour had a downward trend, but more moderate. Although they were traded downwards so far this week, their minimum price for the last three sessions, for the three cases mentioned, is still higher than the minimum price of the previous week.

France’s electricity futures for the next quarter in the EEX market made history this week. In these first three days, the downward trend that started in the middle of July and paused last week starting and ending practically the same price was resumed. This resumption of the decline meant that in the session of last Tuesday, August 6, the settlement price was €54.38/MWh, which represents the minimum price since November 2018. In the case of Germany, the prices of the futures for the fourth quarter of 2019 also showed a decreasing behaviour, but without lowering their historical lows, although the settlement price of yesterday’s session, Wednesday, August 7, €46.66/MWh is the minimum of the last month. The threshold of €47/MWh for this product in Germany had not been crossed since the first week of July.

In the case of the futures for the calendar year 2020 of France and Germany, prices also fell so far this week, the decline in the German product being more noticeable. However, the minimum until now, at €51.90/MWh for France and €49.89/MWh for Germany, reached in both cases in the session of yesterday, Wednesday, August 7, are still higher than the average prices of both products so far in 2019, which today stand at €51.72/MWh and €48.53/MWh respectively.

The electricity demand of mainland Spain increased by 2.1% from Monday to Wednesday of this week compared to the same period of the previous week. Despite the increase in average temperature values of 2.4 °C, the labour effect of August slowed this rise. According to AleaSoft, a recession in the electricity demand is expected next week.

During the first three days of this week, wind energy production lowered by 21% compared to the average values of last week. However, AleaSoft’s analysis point to a recovery during the rest of this week, that may even exceed the average values of the previous week. Similarly, wind energy production growth is expected for next week.

In general, renewable energy production suffered a fall at the beginning of this week. According to the registered values of solar energy production, which includes photovoltaic and solar thermal, the decrease was 11% in mainland Spain when compared with the average values of last week.

So far, all nuclear power plants are working, which favoured the continued nuclear energy production, around 166 GWh per day.

In the first three days of this week hydroelectric energy production recovered 3.4%, compared to the same period last week.

The current level of hydroelectric reserves is 10 118 GWh, which represents a decrease of 324 GWh compared to last week. According to data from the latest Hydrological Bulletin of the Ministry for Ecological Transition, this level represents 44% of the total capacity.