AleaSoft, December 1, 2020. In November, the prices of most of the European electricity markets were higher than those of October, but they remained below those of November 2019. The electricity demand and the Brent futures had a similar behaviour. The wind energy production fell in general and the solar photovoltaic energy production grew year‑on‑year. The CO2 futures increased and the gas futures were lower than those of October and November 2019.

The advance of the autumn and the reduction in the hours of sunshine caused the solar energy production of November to decrease in all European electricity markets compared to that registered in October. The decreases were between 43% of Spain and 14% of France.

However, there was a general increase in production in November 2020 compared to that of the same month of 2019. These rises were led by the Spanish market, where the increase was 56%. 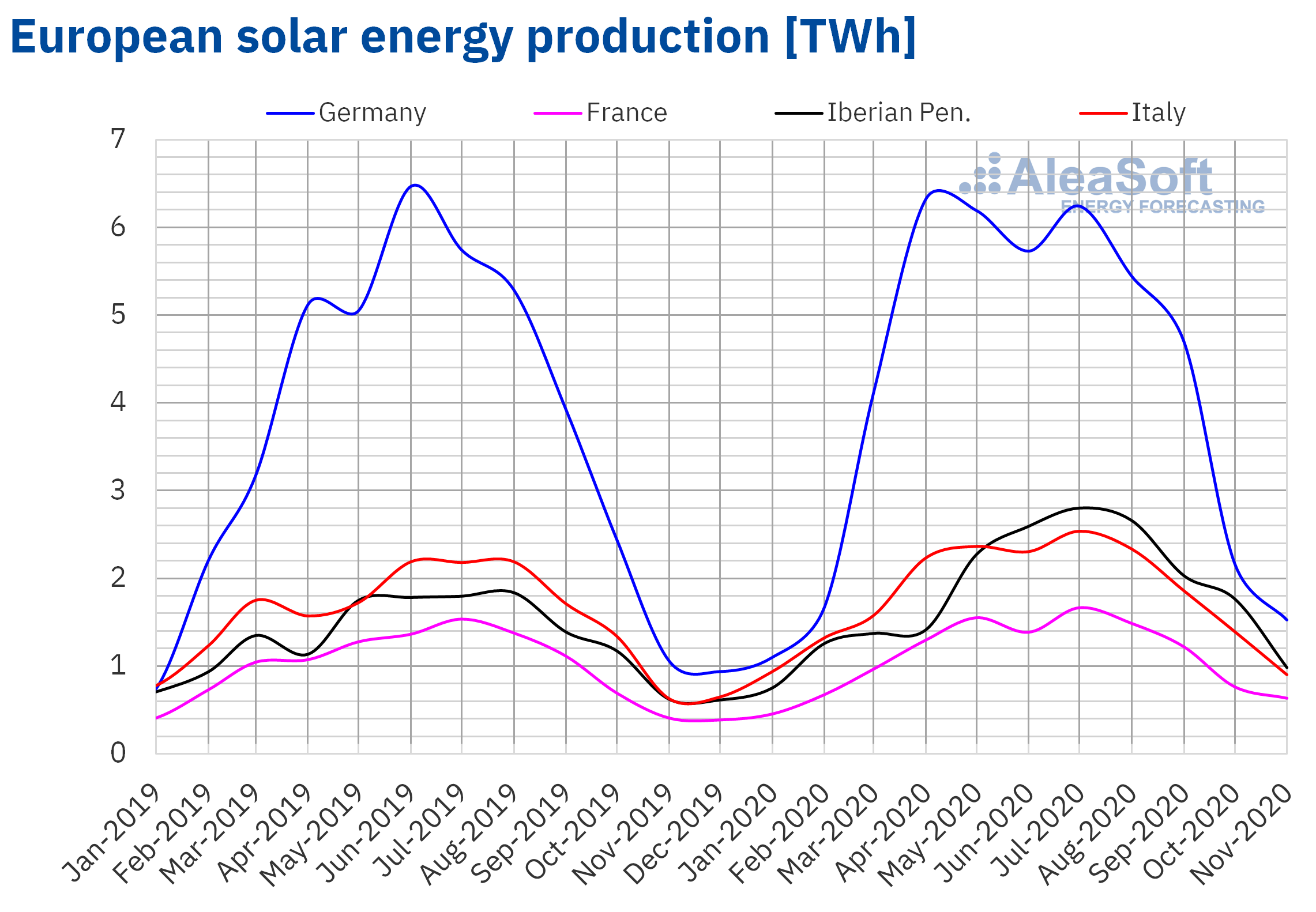 In the case of the wind energy production of November, in general there were decreases when comparing both with October 2020 and with November 2019. With respect to October, the decreases were generalised, reaching 28% in Italy. In the year‑on‑year comparison, there was only an 11% increase in the German production. In the rest of the markets, the production fell, with the Italian market being the one with the greatest variation again, of ‑55%. 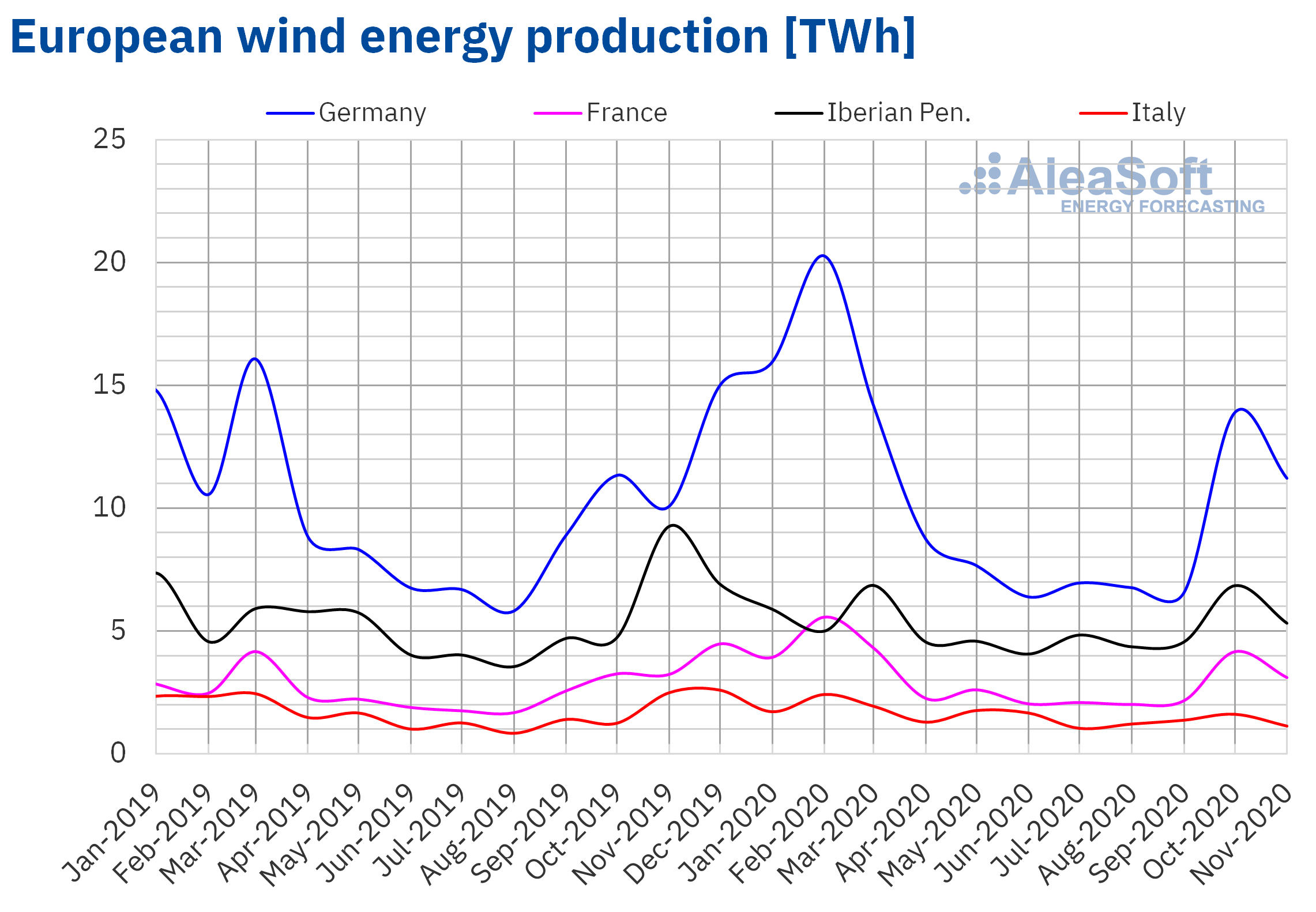 The electricity demand in November increased in all European markets, favoured by the drop in temperatures. The largest increase occurred in France, which was 8.1%. However, the demand of the penultimate month of 2020 declined year‑on‑year in almost all markets, mainly due to a warmer November than that of the previous year in most of Europe. Again, the greatest variation was in France, of ‑8.5%. The only markets where the demand increased were those of the Netherlands and Germany, by 1.4% and 1.8% respectively. 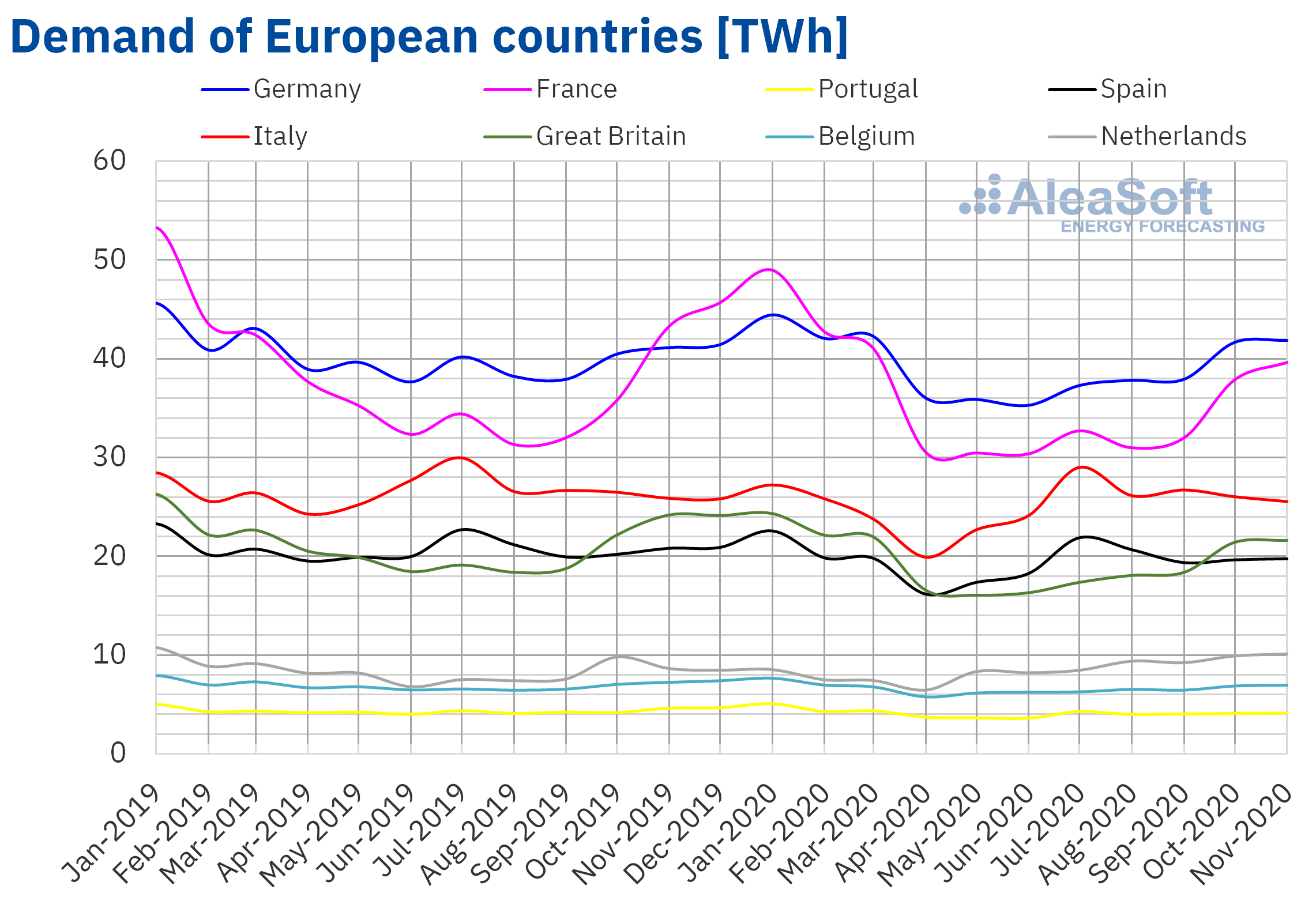 In November, the prices of most European electricity markets increased compared to those of October. The exception was the Nord Pool market of the Nordic countries where the prices fell by 57%, averaging €6.32/MWh in the eleventh month of 2020. However, in most cases the prices did not exceed those of November 2019, except in the IPEX market of Italy, whose monthly average price, of €48.75/MWh, was 1.2% higher.

The recovery in prices compared to October was favoured by the general increase in electricity demand, the decrease in wind and solar energy production, and the increase in CO2 prices.

On the other hand, the factors that influenced the year‑on‑year decrease were the decrease in demand in most markets, the increase in solar energy production and lower gas prices than in November 2019. 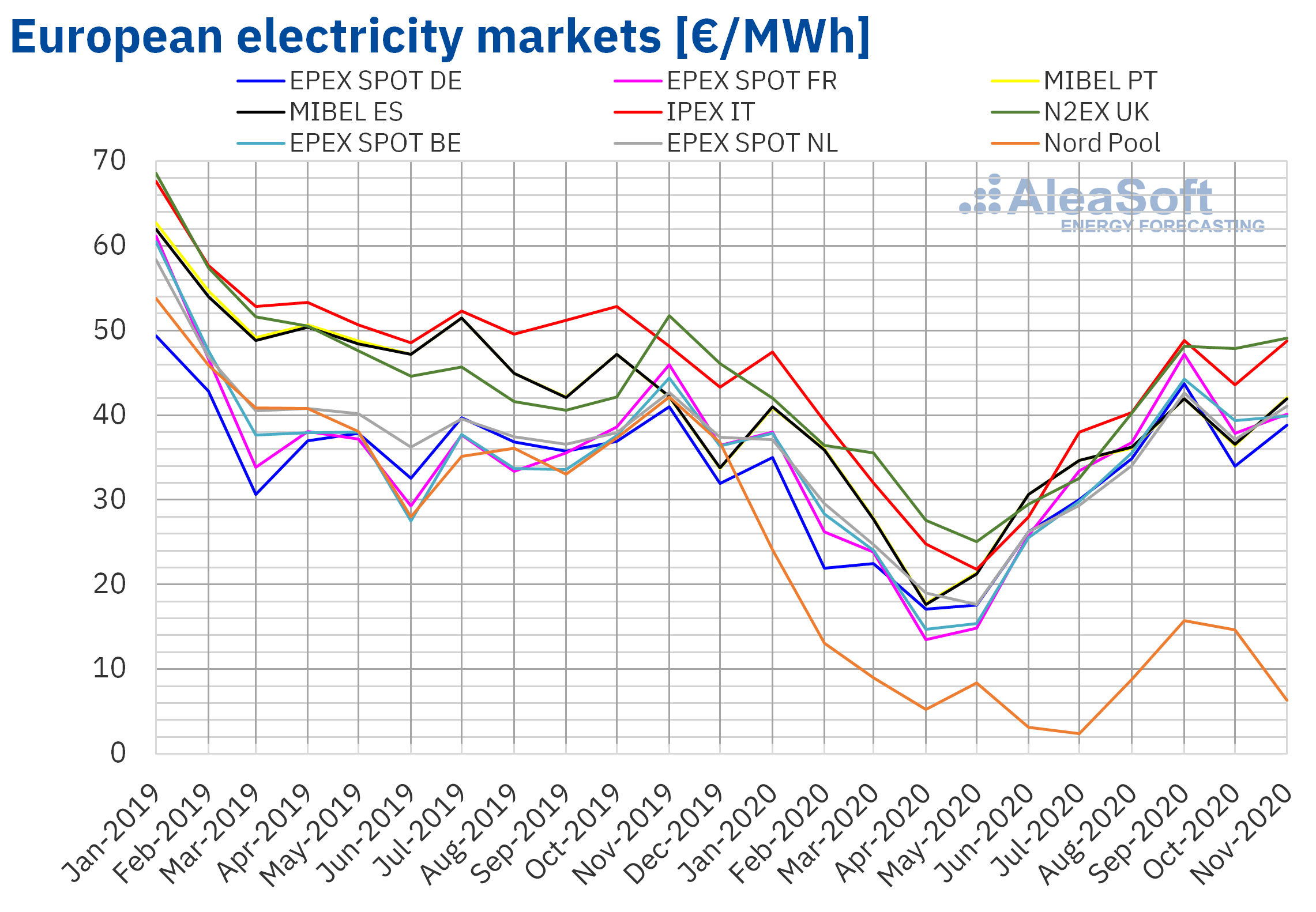 Some factors that favoured the rising price trend during November were the hopeful news about the vaccines against COVID‑19, the expectations that the OPEC+ will postpone the increase in production that is planned for January, the results of the United States elections, the data on the increase in crude processing in the China’s refineries in October and the signing of a trade agreement on Sunday, November 15, by fifteen countries of the Asia‑Pacific region.

The TTF gas futures prices for the month M+1 in the ICE market oscillated around €14/MWh during the first half of November. However, in the first part of the second half of the month, they presented a downward trend that led them to reach €12.89/MWh on the 20th. During the last days of the month, the prices recovered again and reached the maximum value of the period, of €15.14/MWh, on the 30th. The monthly average price of the futures of this product traded in November was €13.94/MWh, 1.7% and 12% lower than those of October 2020 and November 2019 respectively. 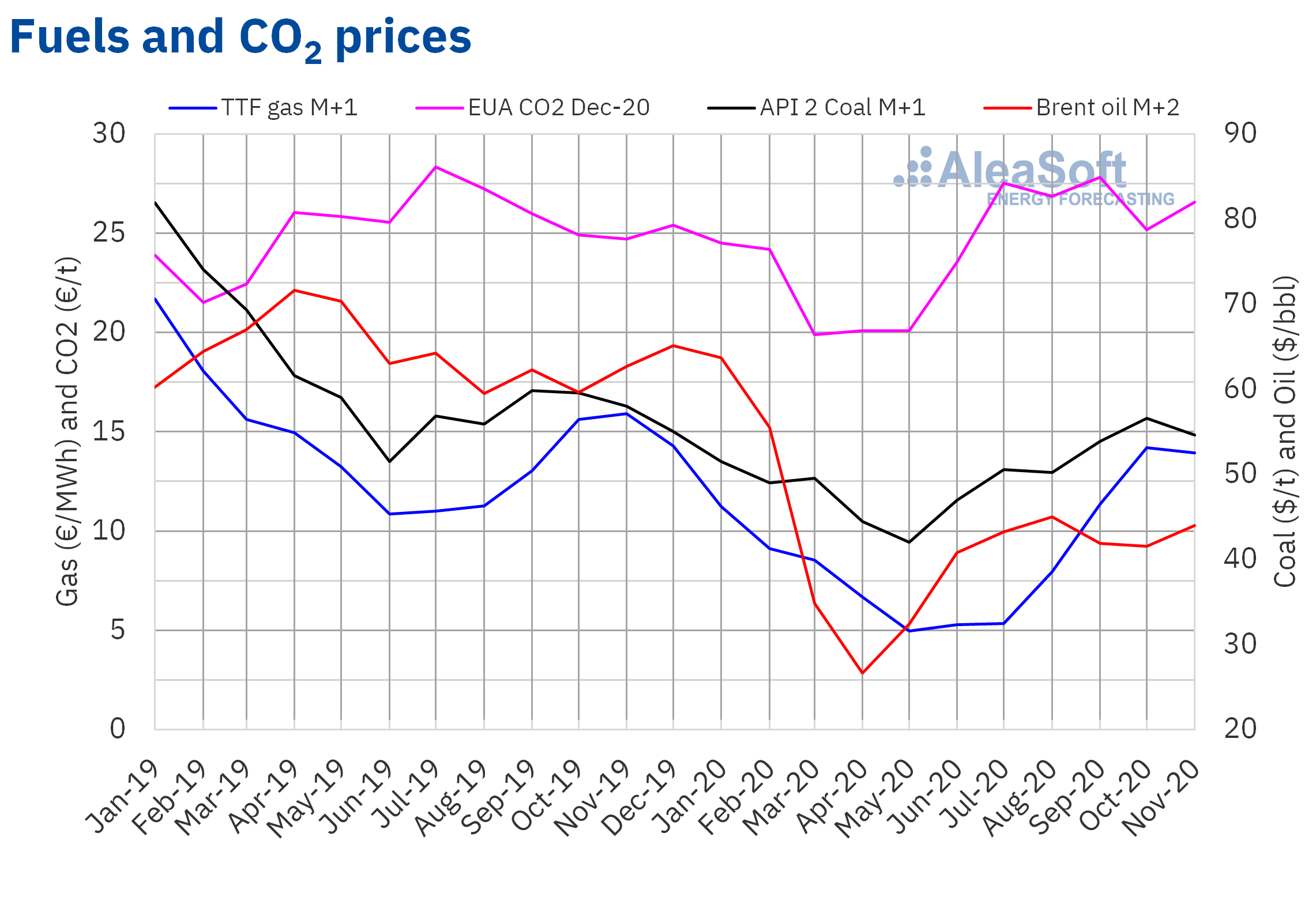 At AleaSoft, detailed analyses of the evolution of the European electricity markets, their mid and long‑term perspectives, as well as other reports of interest for the energy sector are carried out.

In addition, at the beginning of 2021, on January 14, a webinar will be held at AleaSoft to analyse the prospects for the energy markets from that year, in which a vision of the PPA market for the large consumers will also be given. Speakers from PwC Spain will participate in this webinar and it will be the second part of the webinar held on November 26, in this case with the participation of speakers from Vector Renewables, whose recording is available through this link or by writing to webinar@aleasoft.com.

PrevAnteriorPrice increases in the energy markets during the last days of November
SiguienteTechnical Due Diligence: “The renewable energy projects are real plants that have to be built”Next
Menu
Facebook-f Twitter Linkedin Instagram