AleaSoft, November 30, 2020. In the fourth week of November, there were increases in prices of the spot and futures European electricity markets, as well as of the Brent, gas, coal and CO2 markets. In some cases, values that were not seen for a few months were reached: in coal, since January, in Brent, since March, and in CO2, since September. The gas exceeded €14/MWh again. These increases, the decrease in renewable energy production and the increase in demand favoured the price increase in the spot markets.

The solar energy production decreased in all the markets analysed at AleaSoft during the fourth week of November compared to the week of November 16. The Iberian Peninsula registered the greatest decrease, of 40%. In the markets of Germany and France, the production fell by 23% and 16% respectively. On the other hand, the Italian market was the one with the lowest variation, with a decrease of 7.6%.

In the year‑on‑year analysis, from November 1 to 29, the solar energy production increased in all the markets analysed at AleaSoft. In this period, the generation with this technology in the Iberian Peninsula was 56% higher than that registered during the same days of 2019. In the French market, the production grew by 54%, while in the markets of Germany and Italy the increases were 46% and 45% respectively.

For the first week of December, the AleaSoft‘s forecasting indicates that the solar energy production will increase in the markets of Germany and Spain compared to the last week of November. In the Italian market, a decrease in production with this technology is expected. 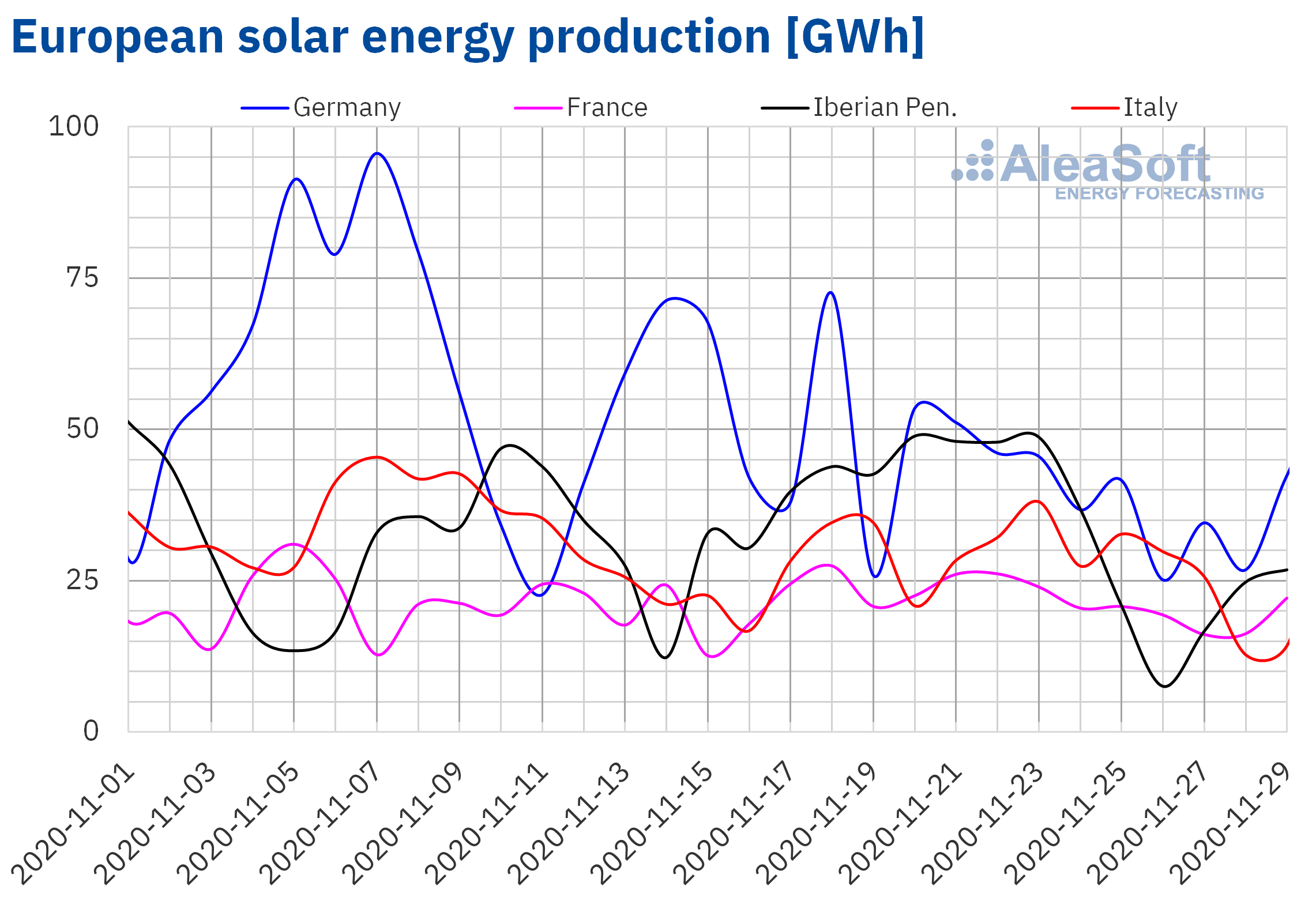 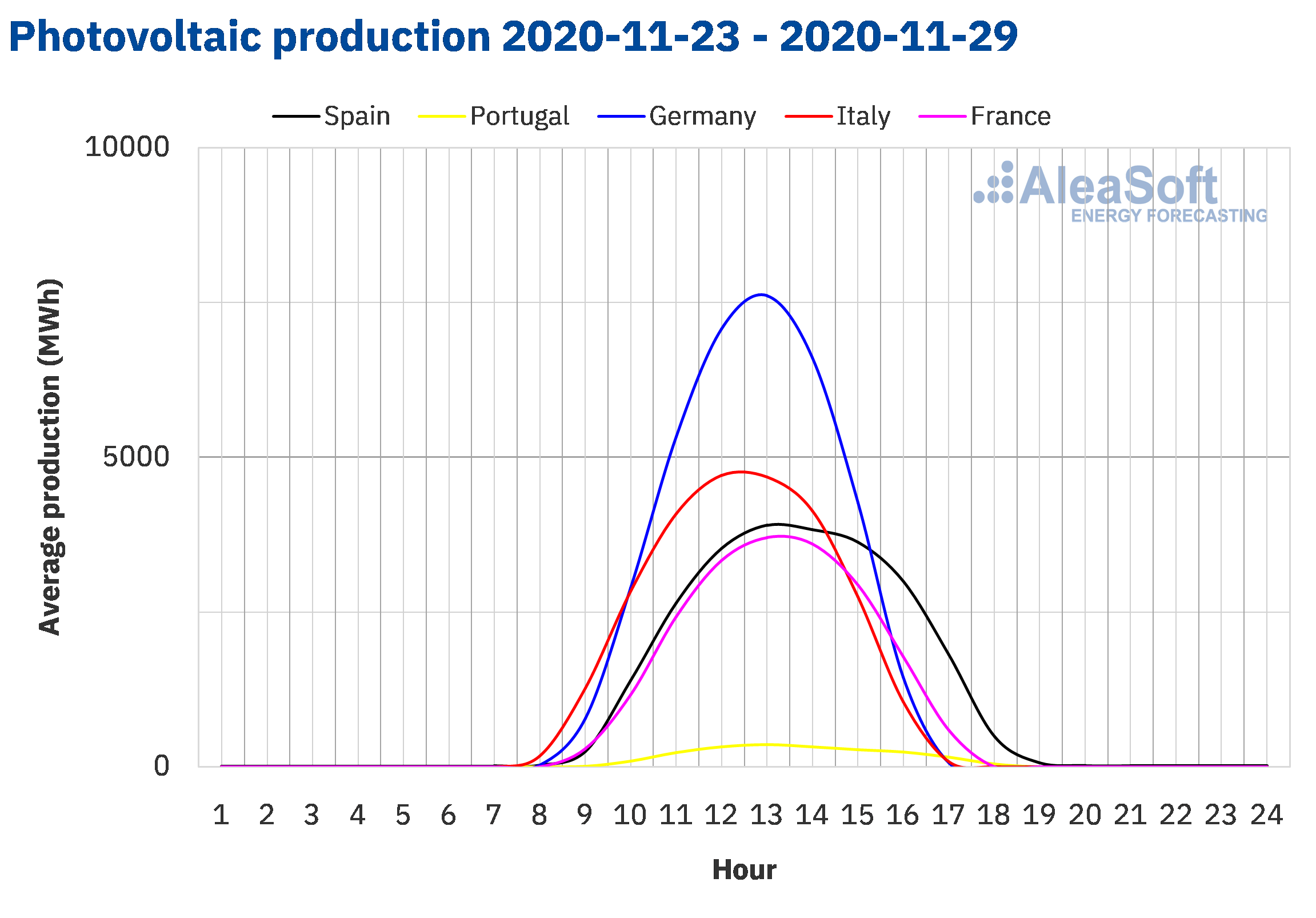 During the week that began on Monday, November 23, the wind energy production decreased in the markets analysed at AleaSoft compared to the previous week. In the German market it fell by 61%, while in the markets of Italy and France the decreases were 41% and 33% respectively. The Iberian Peninsula registered the lowest variation, with a decrease of 3.9%.

In the first 29 days of November, the wind energy production decreased in most of the analysed markets. In the Italian market and the Iberian Peninsula the decreases were 58% and 42% respectively. In the French market it fell by 3.1%. On the contrary, in the German market, the production with this technology increased by 11% compared to the same period of 2019. 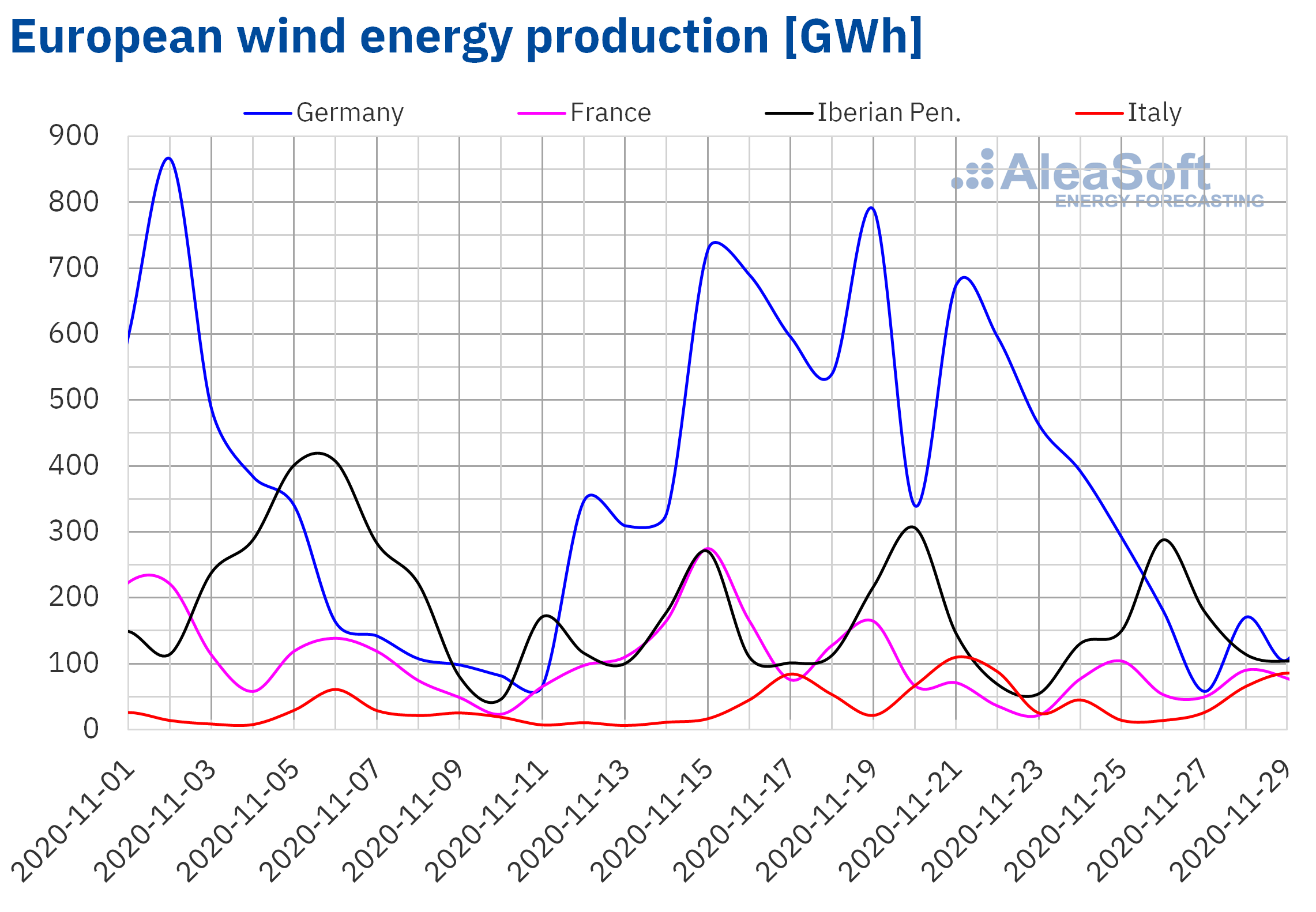 During the week of November 23, the electricity demand increased in all European markets compared to the previous week. This growth in demand, as predicted by the AleaSoft‘s forecasting, was more notable in the markets of Great Britain and France, where the increases were 9.8% and 8.0% respectively. The demand of France increased mainly from Monday to Thursday, as can be seen in the AleaSoft‘s observatory for the French market. In the case of Great Britain, the rise was more marked as of Wednesday, November 25. In the Iberian Peninsula, the increases were 6.0% in Spain and 5.6% in Portugal in that order. The Belgian market registered a rise of 4.0%. On the other hand, the markets of Italy and Germany had variations of less than 2.0%.

At AleaSoft, the upward trend in electricity demand is expected to continue in all European markets during the week of November 30. 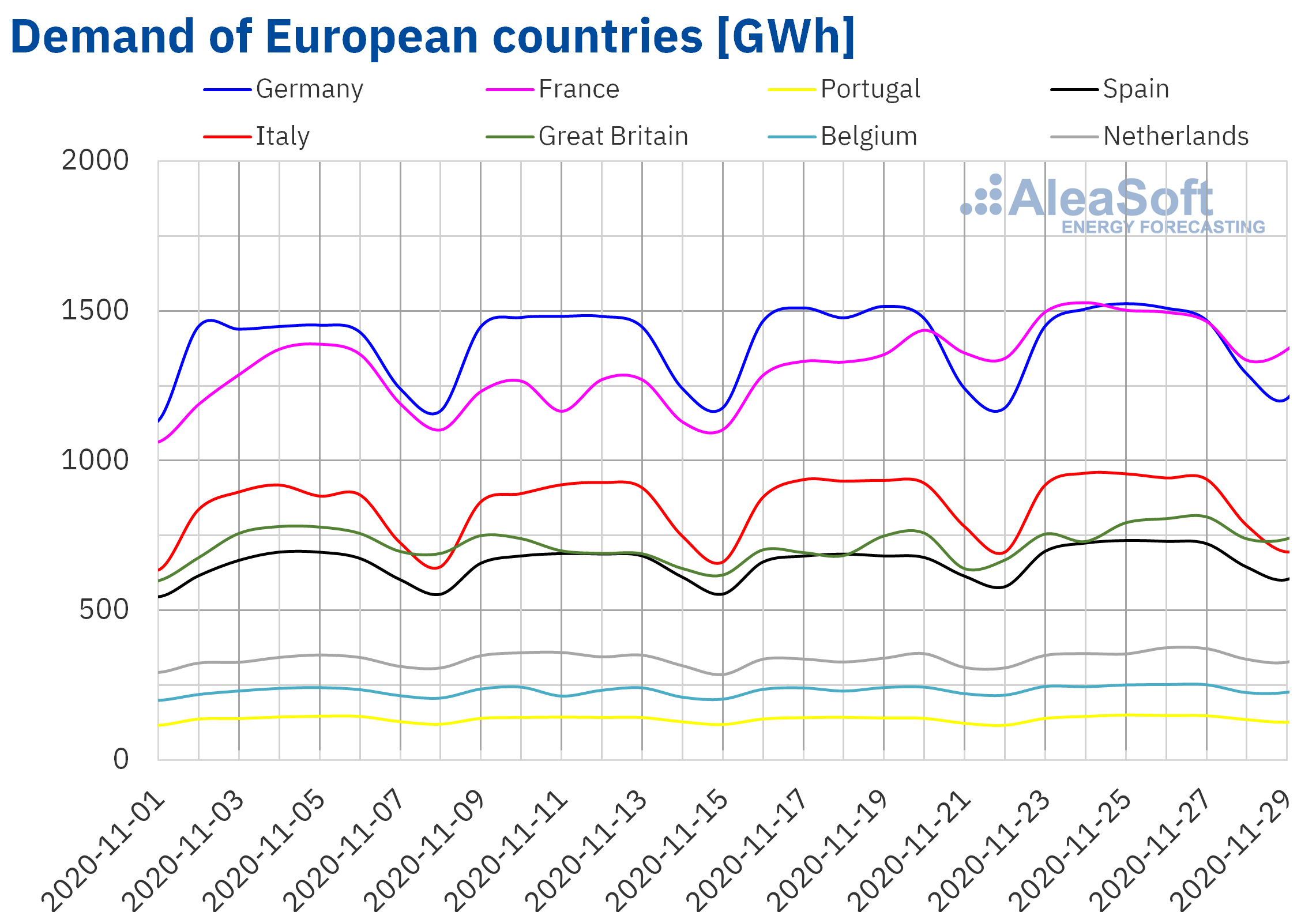 The week of November 23, the prices of all the analysed European electricity markets increased compared to those of the previous week. The market with the highest price increase, of 401%, was the Nord Pool market of the Nordic countries, followed by the EPEX SPOT market of Germany, with an increase of 48%. On the other hand, the market with the lowest price increase, of 16%, was the MIBEL market of Spain and Portugal. In the rest of the markets, the price increases were between 21% of the IPEX market of Italy and 32% of the EPEX SPOT markets of France and the Netherlands and of the N2EX market of Great Britain.

The week of November 23, the weekly average prices were above €48/MWh in almost all the analysed European electricity markets. The exception was the Nord Pool market of the Nordic countries, which had the lowest average price, of €10.52/MWh. On the other hand, the highest average, of €58.22/MWh, was reached in Great Britain.

On the other hand, during the fourth week of November, the European electricity markets prices remained loosely coupled. The highest daily prices of the week were reached in the Italian market and the British market. Instead, the lowest prices were those of the Nord Pool market.

Regarding the hourly prices, in the fourth week of November hourly prices above €100/MWh were reached on various occasions in the European electricity markets. The highest hourly price of the week, of €351.32/MWh, was reached at the hour 19 of Thursday, November 26, in the British market. This price is the highest since the end of November 2016 in this market. 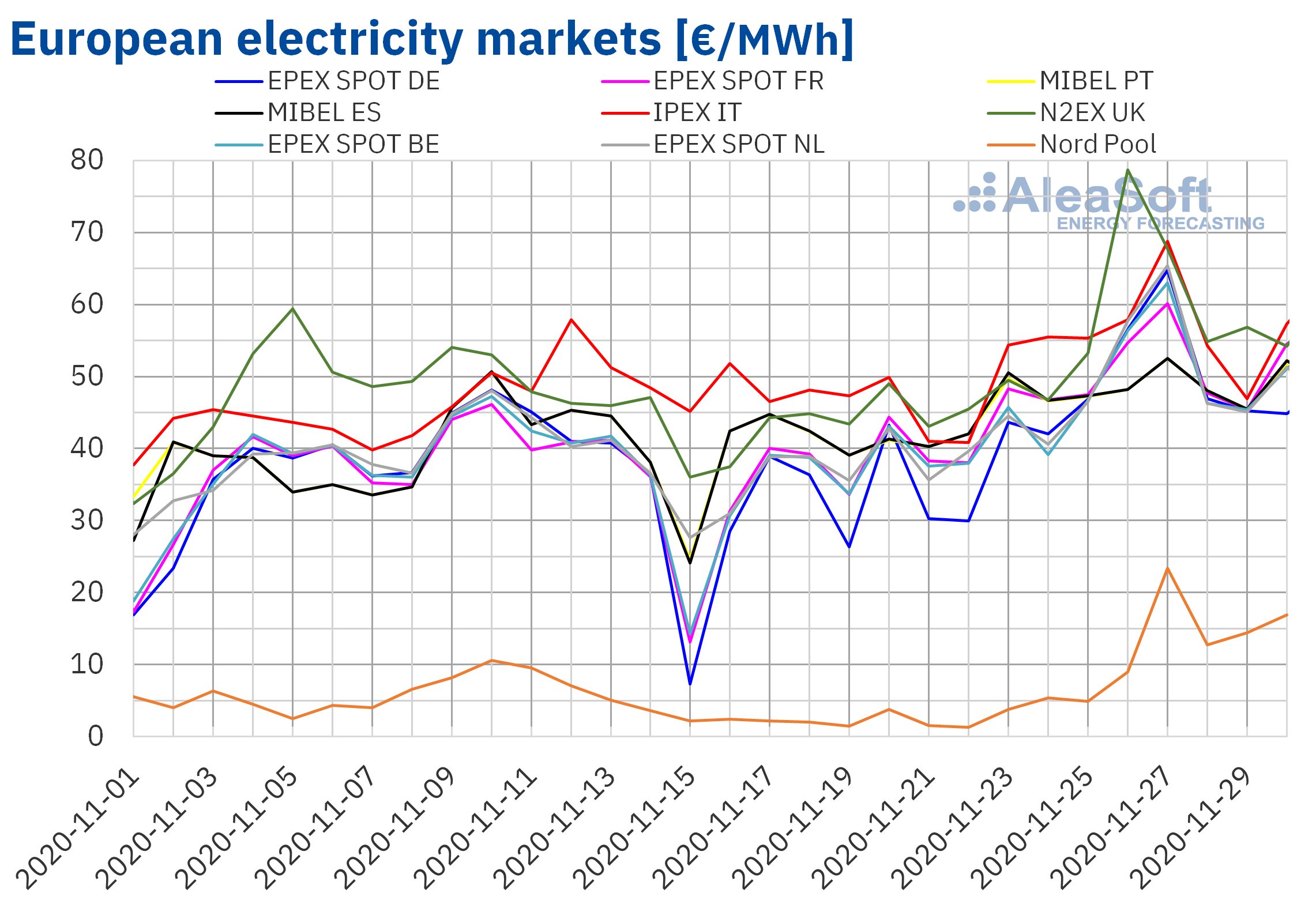 The AleaSoft‘s price forecasting indicates that the week of November 30 the prices of most of the European electricity markets will continue to increase. However, declines are expected in the MIBEL market of Spain and Portugal, favoured by a significant recovery in wind energy production.

During the fourth week of November, the behaviour of the European electricity futures prices for the next quarter was a general increase. The NASDAQ market of the Nordic countries led the increases with a 74% increase in the settlement price of the November 27 session compared to that of the November 20 session. It was closely followed by the ICE market of the same region, with an increase of 73%. The OMIP market of Spain and Portugal was the one where the prices rose the least, with an increase of 4.9% in both countries.

Regarding the electricity futures prices for the year 2021, the behaviour was the same, a generalised rise led by the Nordic countries, with an increase of 52% in both the ICE market and the NASDAQ market. In this product, it was also the OMIP market of Spain and Portugal that registered the smallest increase, with a rise of 3.3% for both countries. Leaving aside the markets of the Nordic region that registered greater relative increases due to their low prices, the EEX market of France was the one with the highest increase with a 8.0% difference compared to the last session of the previous week.

The settlement prices of the Brent oil futures for the month of January 2021 in the ICE market in the fourth week of November were higher than those of the same days of the third week of the month and registered increases almost every day. The maximum settlement price of the week, of $48.61/bbl, was reached on Wednesday, November 25. This price was 9.6% higher than that of the previous Wednesday and the highest since the beginning of March.

The encouraging news about the vaccines being developed against COVID‑19 favoured these price increases. The expectations that the OPEC+ will agree to postpone the production increases planned for January 2021 also exerted their upward influence on the prices. Saudi Arabia and Russia could agree to extend the current production levels due to the effects on the demand of the restrictions imposed to contain the expansion of the coronavirus in the second wave of the pandemic.

In the coming days, the results of the meeting of today, November 30, of the OPEC and of tomorrow, December 1, of the OPEC+, are expected to exert their influence on the evolution of the prices. On the other hand, the levels of oil and gas production in Norway could be affected in December by the effects of a strike. Due to this strike, there are problems in the access of the workers to the platforms and closures could occur, which might also affect the oil and gas futures prices.

As for the TTF gas futures prices in the ICE market for the month of December 2020, during the fourth week of November they registered a generally upward trend, recovering from the decreases of the previous week. The settlement price of Friday, November 27, was €14.48/MWh. This price was 12% higher than that of the previous Friday.

Regarding the TTF gas in the spot market, in the fourth week of November the prices recovered from the decreases of the previous week. On the weekend of November 28 and 29, an index price of €14.55/MWh was reached. But on Monday, November 30, the index price was even higher, of €14.60/MWh.

On the other hand, the API 2 coal futures prices in the ICE market for the month of December 2020, the fourth week of November, increased until reaching a settlement price of $59.55/t on Friday, November 27. This price was 10% higher than that of the same day of the previous week and the highest since mid‑January.

As for the settlement prices of the CO2 emission rights futures in the EEX market for the reference contract of December 2020, the fourth week of November, they were higher than €27/t. The prices increased to reach €28.13/t on Friday, November 27. A price 5.2% higher than that of the previous Friday and the highest since mid‑September. 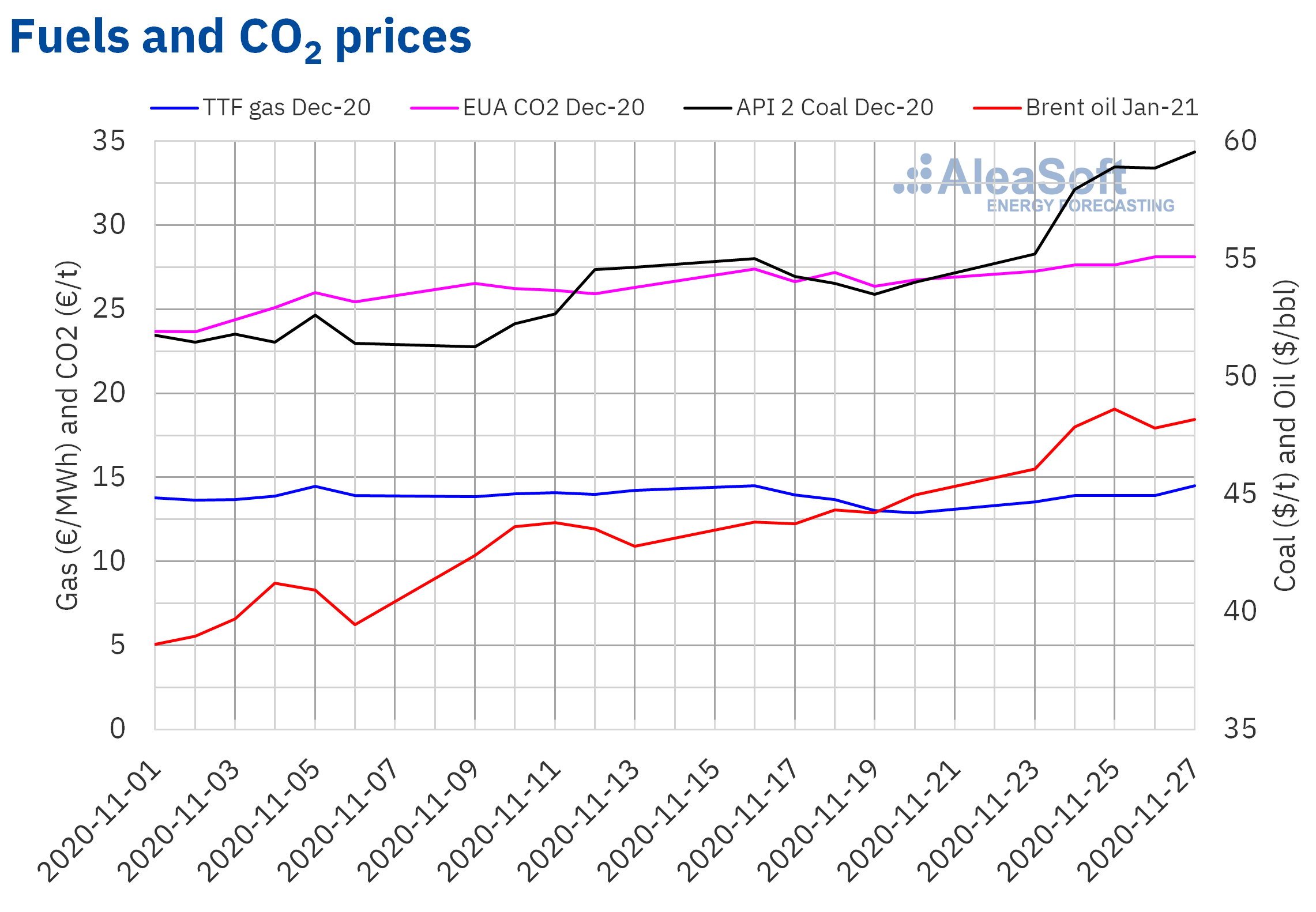 On November 26, the first part of the AleaSoft webinar “Prospects for the energy markets in Europe from 2021” was held, in which speakers from Vector Renewables participated. In addition to commenting on the markets prospects from the next year, in the webinar the effect of the renewable energy auctions on the market and the importance of the technical Due Diligences in the projects financing were analysed. The professionals of the sector can request the recording of the webinar through the AleaSoft website or by writing to webinar@aleasoft.com.

The second part of the webinar will be held on January 14, 2021 and, in addition to continuing to comment on the prospects for the energy markets in the year that will begin, various topics related to the vision of the PPA market for the large consumers will be analysed. On this occasion, in addition to the organisation and analysis of AleaSoft, there will be the participation of speakers from PwC Spain.

At AleaSoft, the markets observatories were enabled, a tool to report on the evolution of the energy markets. In the observatories it is possible to visualise the behaviour of the main variables of the European electricity markets in recent weeks through graphs with hourly, daily and weekly data that are updated daily.