Fall in electricity futures following the retrocess of the gas prices

AleaSoft, November 23, 2020. The electricity futures prices fell during the third week of November following the trend of the TTF gas prices. The prices of the main European spot electricity markets also registered a downward trend with the exception of France and the Iberian Peninsula. Regarding the photovoltaic energy production, it increased from the beginning of November to date compared to the same period of 2019.

The solar energy production between Monday, November 16, and Sunday, November 22, increased by 31% in the Iberian Peninsula. In the French market it increased by 16%, while on the contrary in the markets of Italy and Germany it decreased by 8.0% and 6.6% respectively.

For the last week of November, the AleaSoft‘s solar energy production forecasting indicates that it will decrease in the Spanish and Italian markets. On the contrary, an increase in production is expected in the German market. 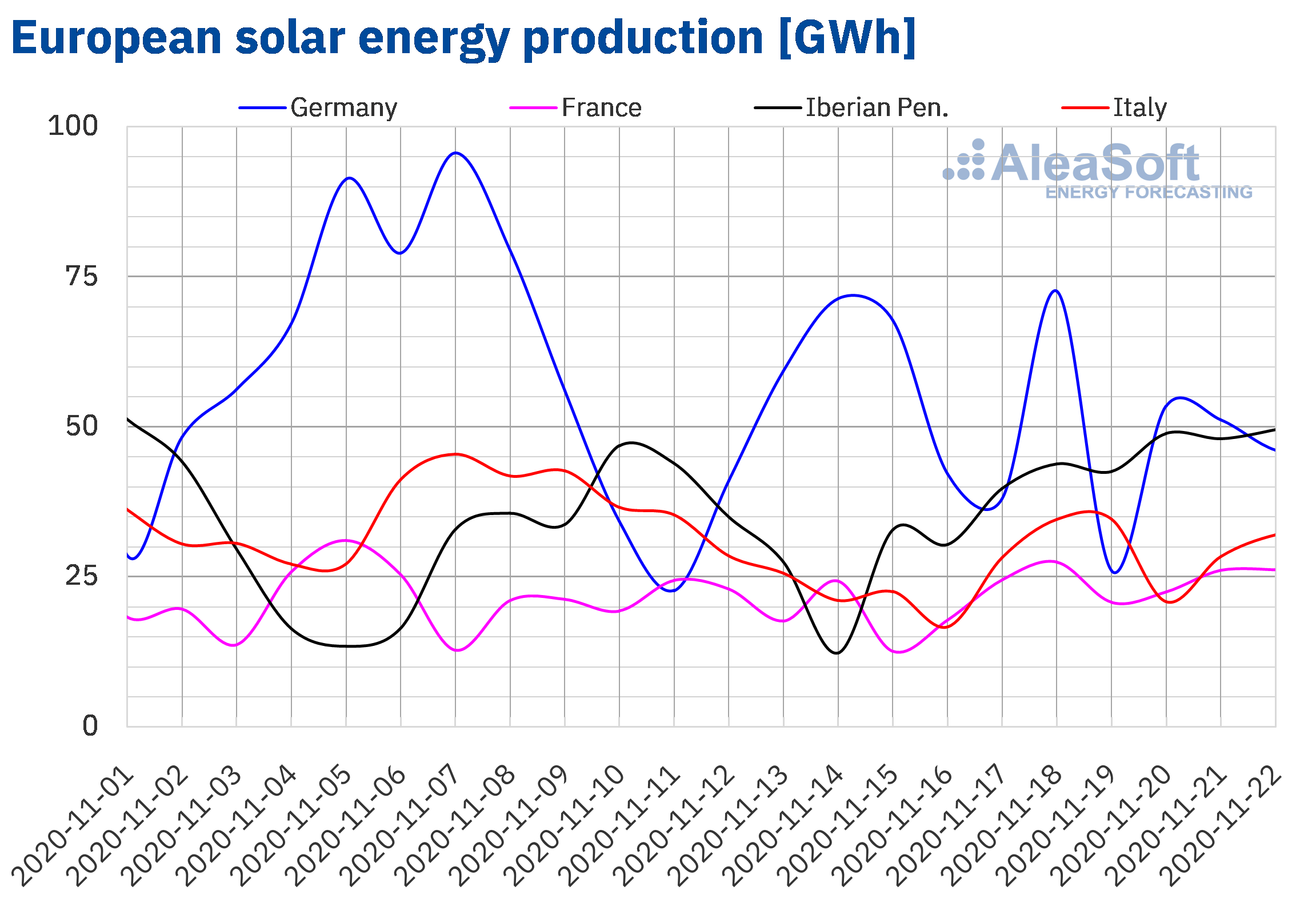 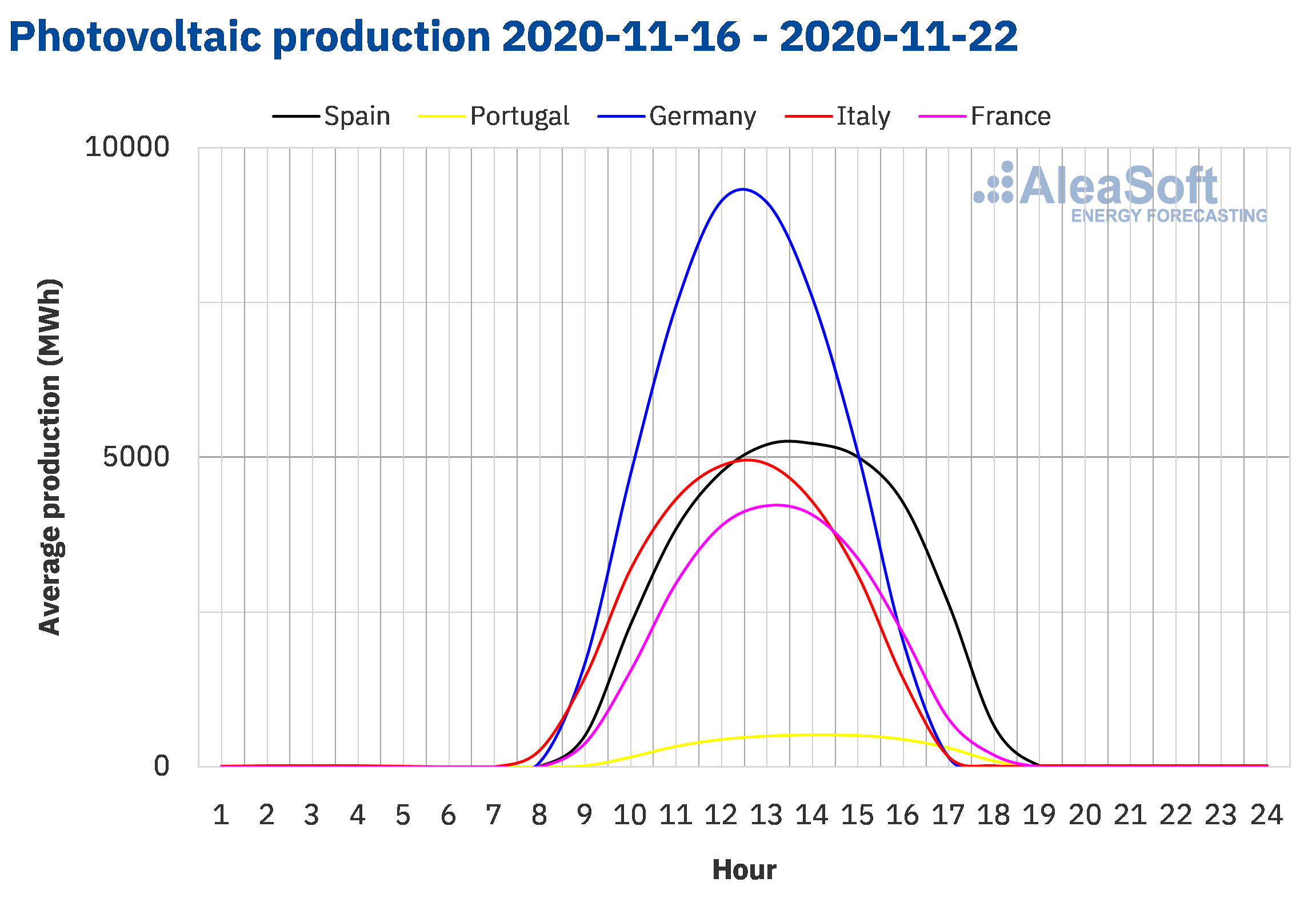 During the week that ended on Sunday, November 22, the wind energy production increased in most of the markets analysed at AleaSoft compared to the week that preceded it. In the Italian market it increased by 375% while in the German market it grew by a remarkable 115%. The exception was the French market where the production with this technology fell by about 10%. On the other hand, the variation in the Iberian Peninsula was +9.7%.

During the period between November 1 and 23, the wind energy production increased by 39% in the German market compared to the same days of November 2019. In the French market it grew by 14%. On the contrary, in the Italian market the production with this technology was 60% lower, while in the Iberian Peninsula it was reduced by 39%. 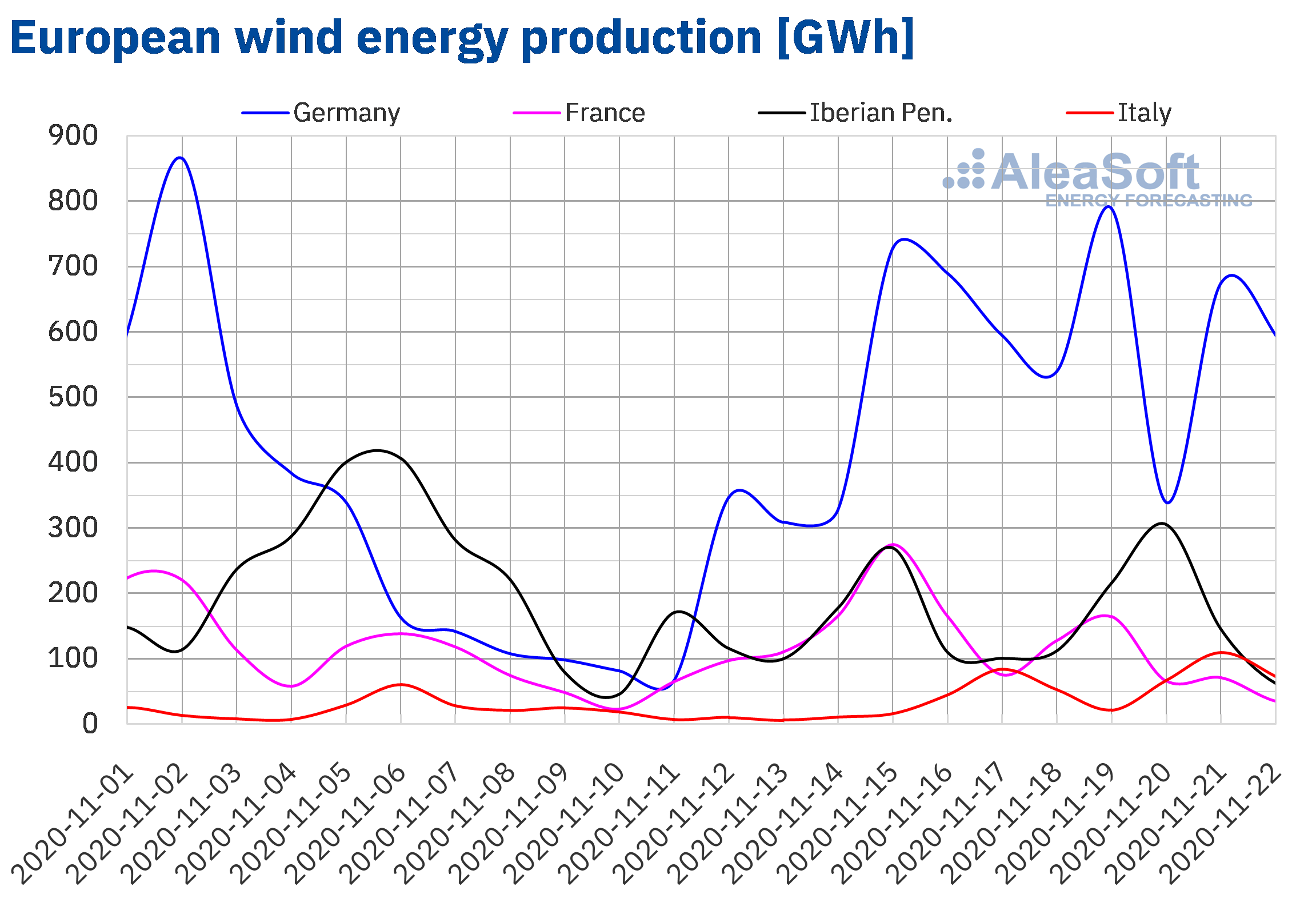 The electricity demand in the European markets increased during the week of November 16 compared to the previous week, except in Portugal. The rise that stands out the most was that of 12% in France, favoured by the drop of up to 8 °C in average temperatures from Friday 20 to Sunday 22 and by the effect of the Armistice Day holiday, celebrated on Wednesday 11 of the previous week. Once the effect of this holiday was corrected, the rise in French demand was 10%. The Belgian market was also influenced by the effect of the aforementioned holiday of November 11, registering an increase of 3.2%. Correcting this effect, the increase was 1.3%. The Italian market registered an increase of 2.7%, while that of Spain registered a small increase of 0.4%. On the other hand, in Great Britain and Germany the increases were 1.4% and 1.1% respectively. The Portuguese market was the only one where the demand fell among those analysed, with a drop of 1.7%.

The growing behaviour of the demand, particularly in the French and Belgian markets, can be analysed in more detail at the AleaSoft‘s electricity demand observatories.

At AleaSoft, the demand is expected to continue growing during the week of November 23 in all European markets. 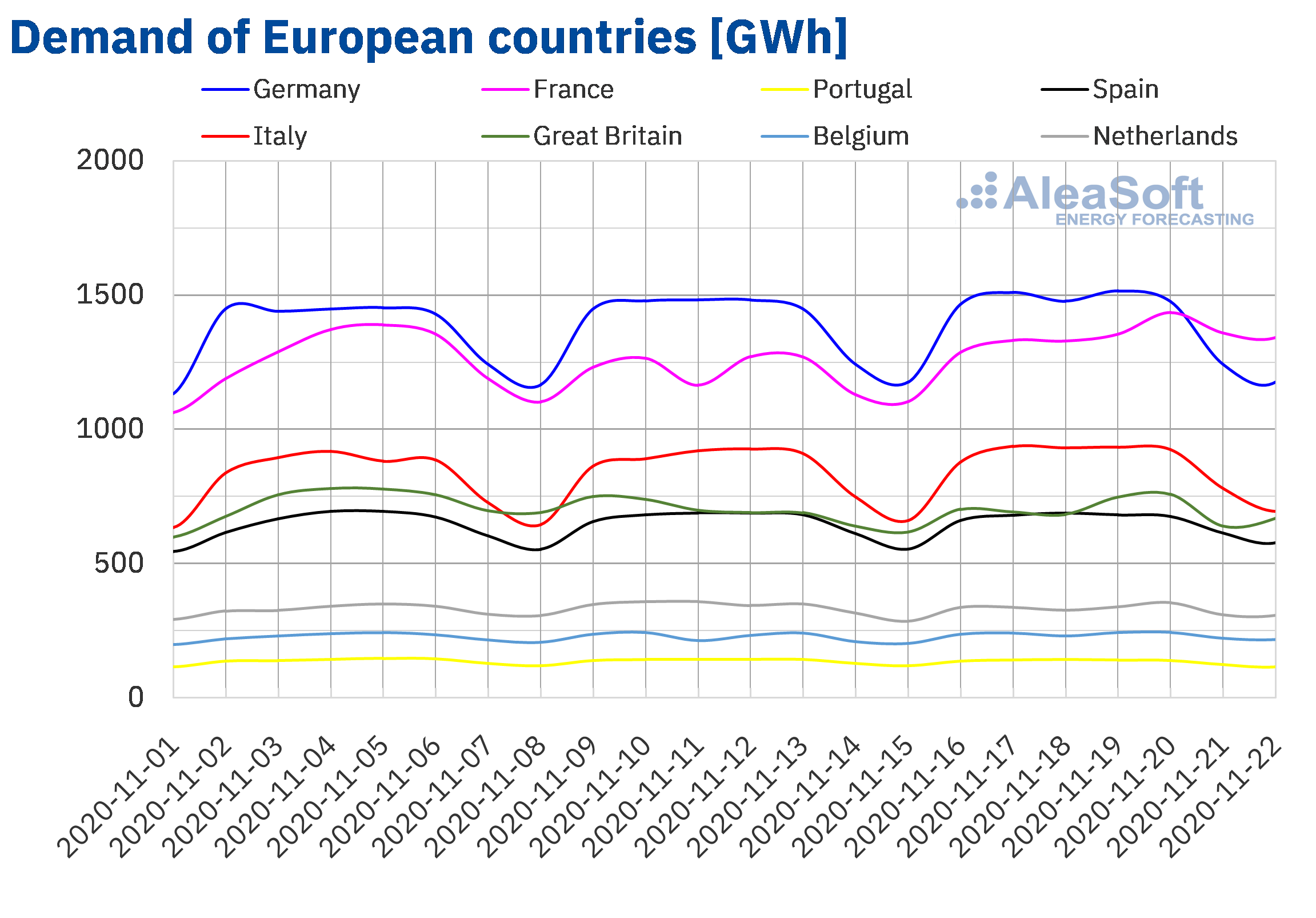 The week of November 16, the weekly average prices were below €45/MWh in almost all the analysed European electricity markets. The exception was the Italian market, with a price of €46.48/MWh. In contrast, the Nord Pool market of the Nordic countries had the lowest average price, of €2.10/MWh. The rest of the markets had averages between €33.38/MWh of the German market and €43.96/MWh of the N2EX market of Great Britain.

On the other hand, the third week of November, the European electricity markets prices were loosely coupled. The markets with the greatest coupling were, on the one hand, the Spanish and Portuguese markets and, on the other, the markets of Belgium, France and the Netherlands. The highest prices of the week were reached in the Italian market and the British market. On the contrary, the lowest prices were those of the Nord Pool market. 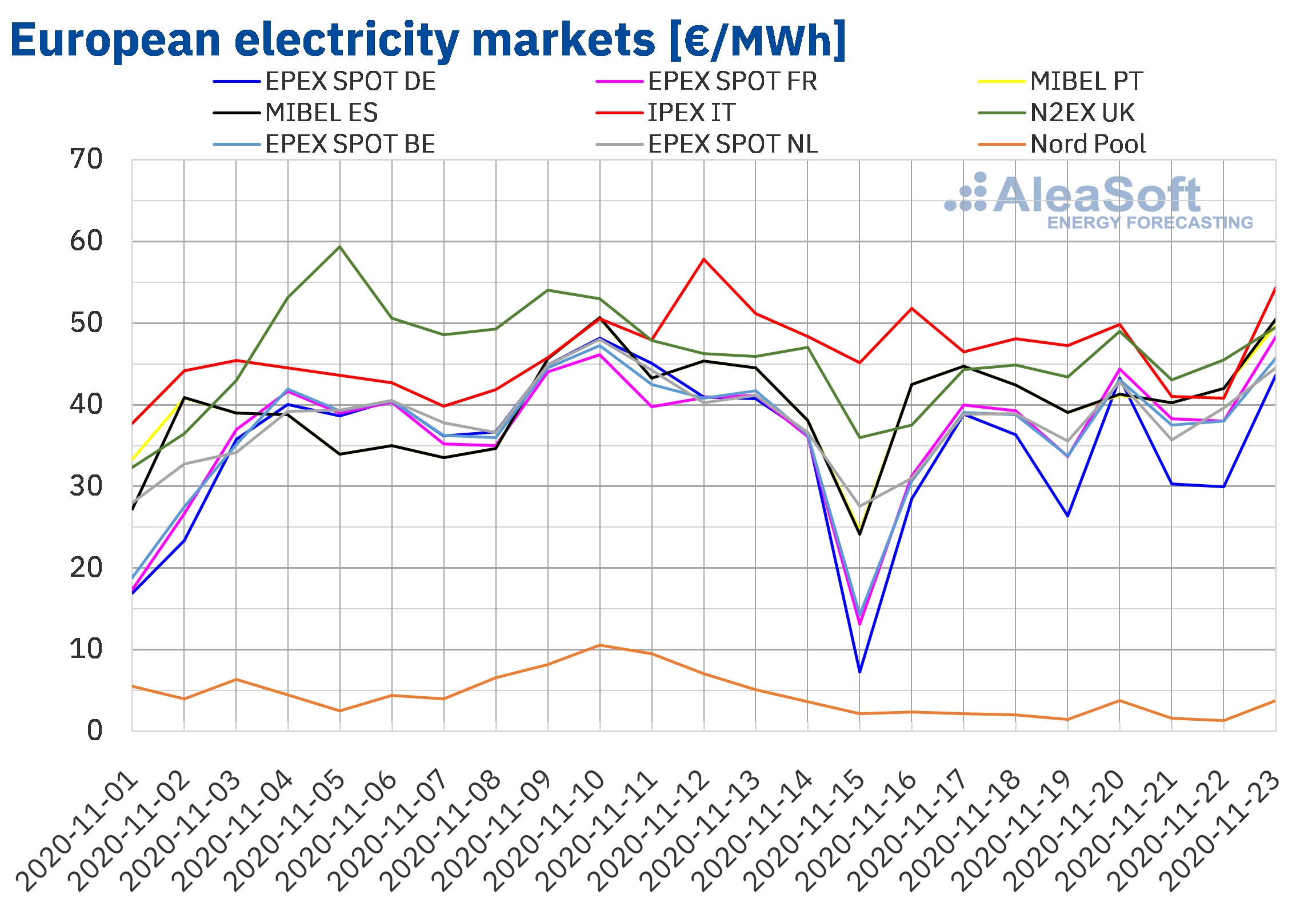 The week of November 16, the significant increase in wind energy production in countries such as Germany or Italy favoured the price decreases registered in these markets.

The AleaSoft‘s price forecasting indicates that the week of November 23 the European electricity markets prices will increase, favoured by an increase in demand in most markets and by the decrease in wind energy production. 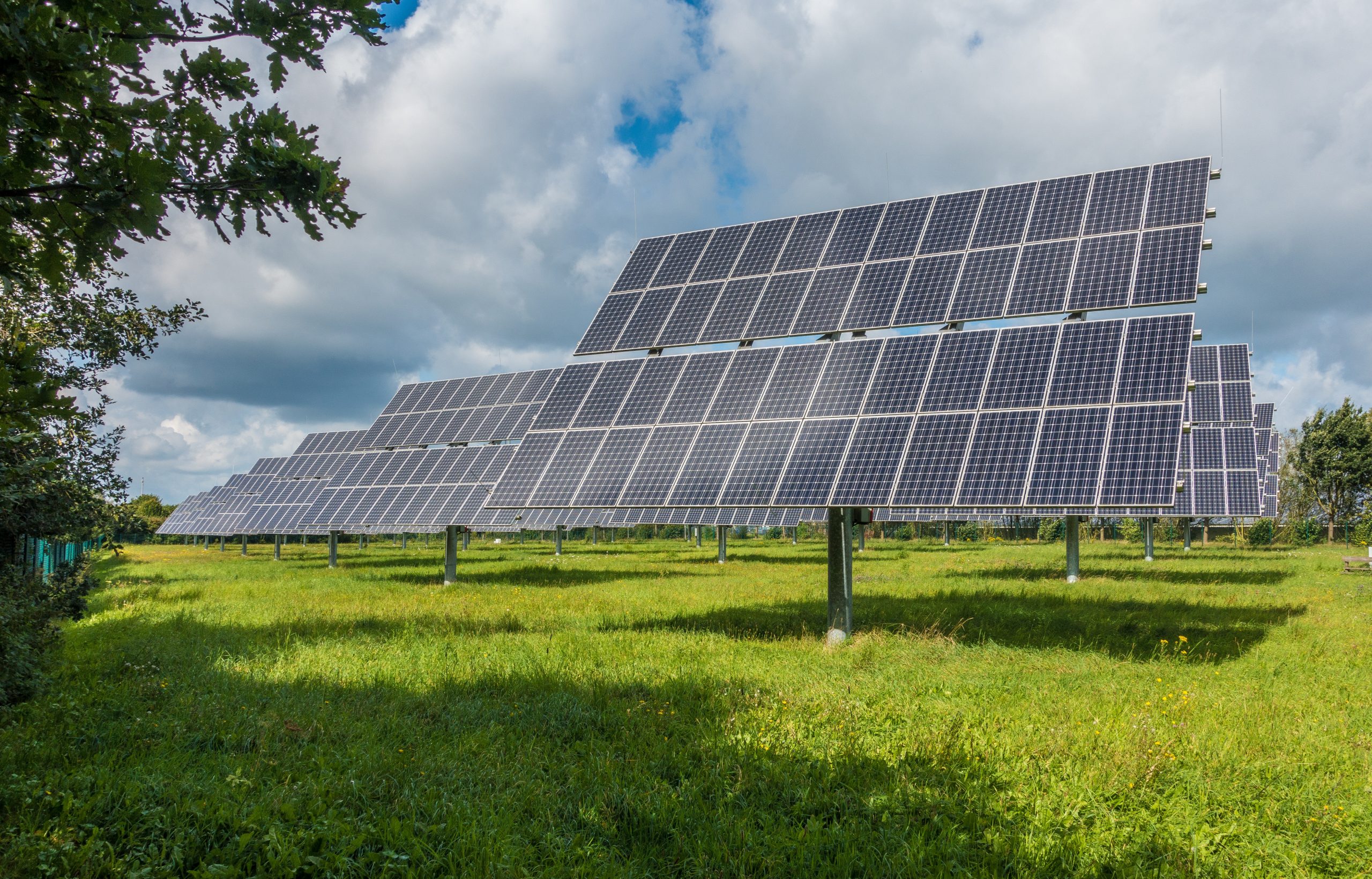 During the third week of November, the electricity futures prices for the first quarter of 2021 had a clearly downward behaviour in the European markets analysed at AleaSoft. The ICE market of the Nordic countries is the market where the prices registered the largest fall, of 26%, closely followed by the NASDAQ market of the same region. In the rest of the markets, the decreases were between 1.9% and 6.9%.

Regarding the electricity futures prices for the year 2021, the behaviour was practically the same, a general decrease. The ICE and NASDAQ markets of the Nordic countries also led this decline, with reductions in their prices of 24%. In the rest of the markets, the drops were below 4.6%. The OMIP market of Spain and Portugal was the one in which the prices changed the least, with a decrease of 0.8%.

The settlement prices of the Brent oil futures for the month of January 2021 in the ICE market in the third week of November were higher than those of the same days of the second week of the month. On Friday, November 20, a settlement price of $44.96/bbl was reached, 5.1% higher than that of the previous Friday and the highest since the beginning of September.

The news about the development status of different vaccines against COVID‑19, as well as the signing of a trade agreement by fifteen countries of the Asia‑Pacific region, favoured the price increases of the third week of November. However, there are still concerns about the current levels of infections and the effects on the demand of the measures adopted to try to stop the spread of the disease.

In the coming days, the expectations about the results of the OPEC+ meeting regarding the production cuts for 2021 are expected to exert their influence on the evolution of the prices.

As for the TTF gas futures in the ICE market for the month of December 2020, on Monday, November 16, they reached a settlement price of €14.49/MWh. This price was 4.6% higher than that of the previous Monday and the highest since the end of October. But on Tuesday the prices began to decline and continued to decline for the rest of the week. As a result, the settlement price of Friday, November 20, was €12.89/MWh, 9.4% lower than that of the previous Friday and the lowest since the second half of August.

Regarding the TTF gas in the spot market, on Tuesday, November 17, an index price of €14.32/MWh was reached, the second highest so far in November. But, the rest of the week, the prices fell and the index price of November 21 and 22 was €12.59/MWh, the lowest since the beginning of the previous month.

On the other hand, the API 2 coal futures in the ICE market for the month of December 2020, on Monday, November 16, registered the highest settlement price since the end of October, of $55.00/t. This price was 7.3% higher than that of the same day of the previous week. From Tuesday to Thursday, the prices fell. But on Friday, after the negotiations between the management and the striking workers of the Cerrejón’s Colombian mines failed, the prices recovered and the settlement price was $54.00/t.

As for the settlement prices of the CO2 emission rights futures in the EEX market for the reference contract of December 2020, the third week of November, they were higher than those of the same days of the previous week and oscillated between €27.39/t of Monday, November 16, and €26.35/t of Thursday, November 19. In the case of the price of Monday, this was the highest since the end of September. 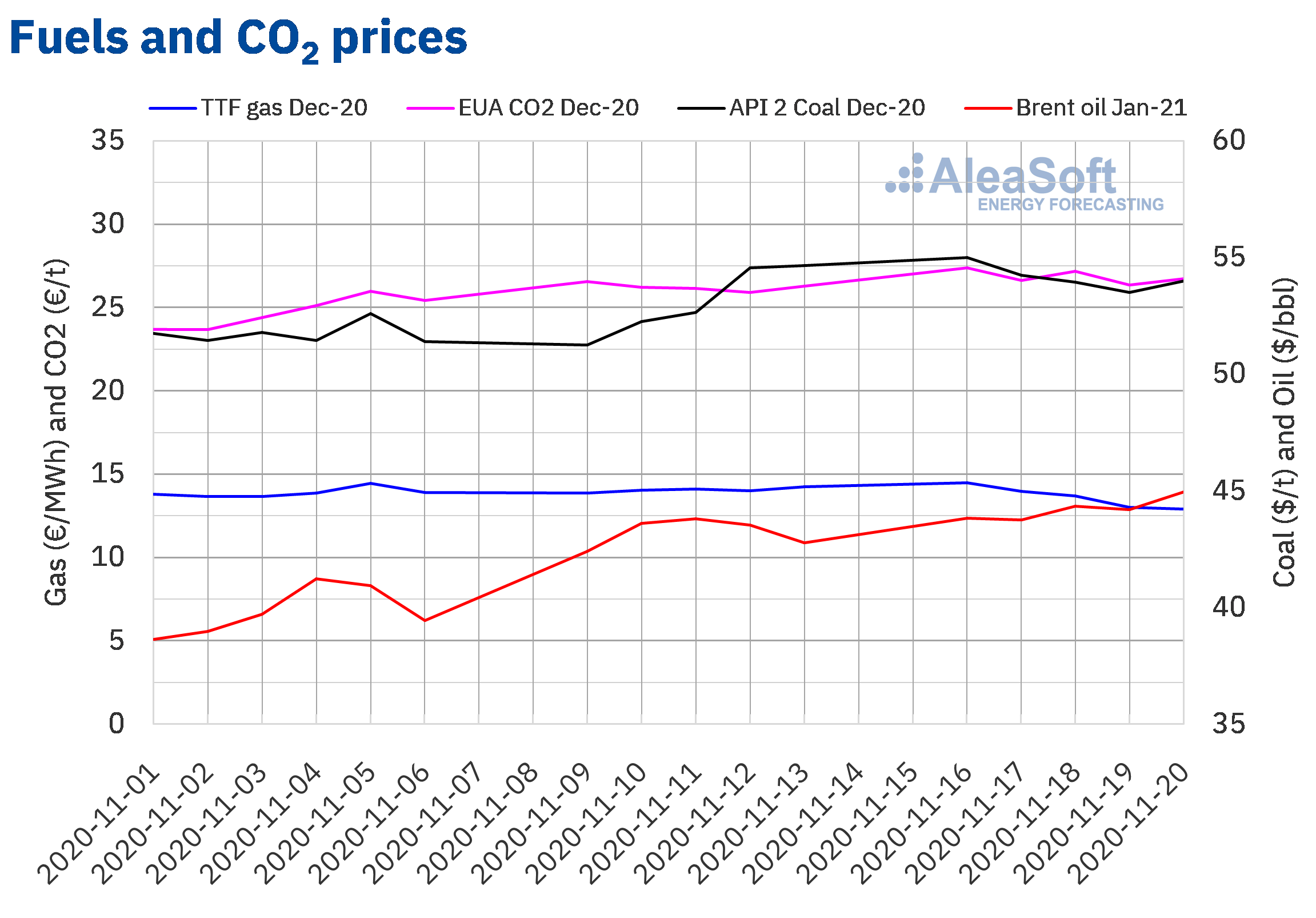 Next November 26, the seventh and last AleaSoft webinar of this year 2020 will be held. This webinar will be the first of a new series on “Prospects for the energy markets in Europe from 2021”. In the webinar the renewable energy auctions, the planned calendar and their effect on the market and the prices will be discussed. There will be the participation of three speakers from Vector Renewables with who issues such as the technical Due Diligence and their importance in the renewable energy projects financing will also be addressed. The second part of this series is scheduled for January 14 with the participation of speakers from the most important companies in the energy sector in Europe.

As the end of the year and the time to renew the supply contracts approach, it is important to remember the importance of having market prices forecasting in all horizons, short, mid and long term, to design a robust energy purchase strategy that allows ensuring advantageous prices in the mid and long term, but also taking advantage of the opportunities that the market may bring at a certain moment.

The evolution of the energy markets can be monitored in the observatories enabled on the AleaSoft website with graphs and updated hourly, daily and weekly information of the main variables of the European electricity markets.