Will the gas supply lack in Spain?

AleaSoft Energy Forecasting, June 15, 2022. The gas supply to Spain has gone through complex situations in recent months. In October 2021, the gas flow through the gas pipeline that crosses the Strait of Gibraltar from Morocco was closed. Now, the commercial and diplomatic relations with Algeria put the focus on the gas pipeline that connects with the North African country. Meanwhile, the arrival of methane tankers practically doubles and gas exports to France are at record levels.

The increase in tensions between the governments of Spain and Algeria generated concern since the main commercial relationship between the two countries is gas. The escalation in geopolitical tension between the two countries comes at a time when the issue of gas supply in Europe is critical, with the gradual reduction of gas from Russia. The sanctions of the European Union on Russian fuels due to the invasion of Ukraine are causing the Eurasian country to decrease and interrupt the gas supply to more and more countries, and the situation is becoming critical in the countries that had it as the main supplier.

The case of Spain is different since its main gas supplier was, until 2021, Algeria, with almost half of all imported gas. Two gas pipelines connect the natural gas fields of Hassi R’Mel, in the Algerian Sahara, with the Iberian Peninsula. The longest of these is the Maghreb‑Europe gas pipeline (MEG) that crosses Morocco and the Strait of Gibraltar. The gas supply to the peninsula through this pipeline was interrupted in October 2021 when Algeria decided not to renew the contract with Morocco for the operation of the pipeline due to the diplomatic crisis between the two countries. 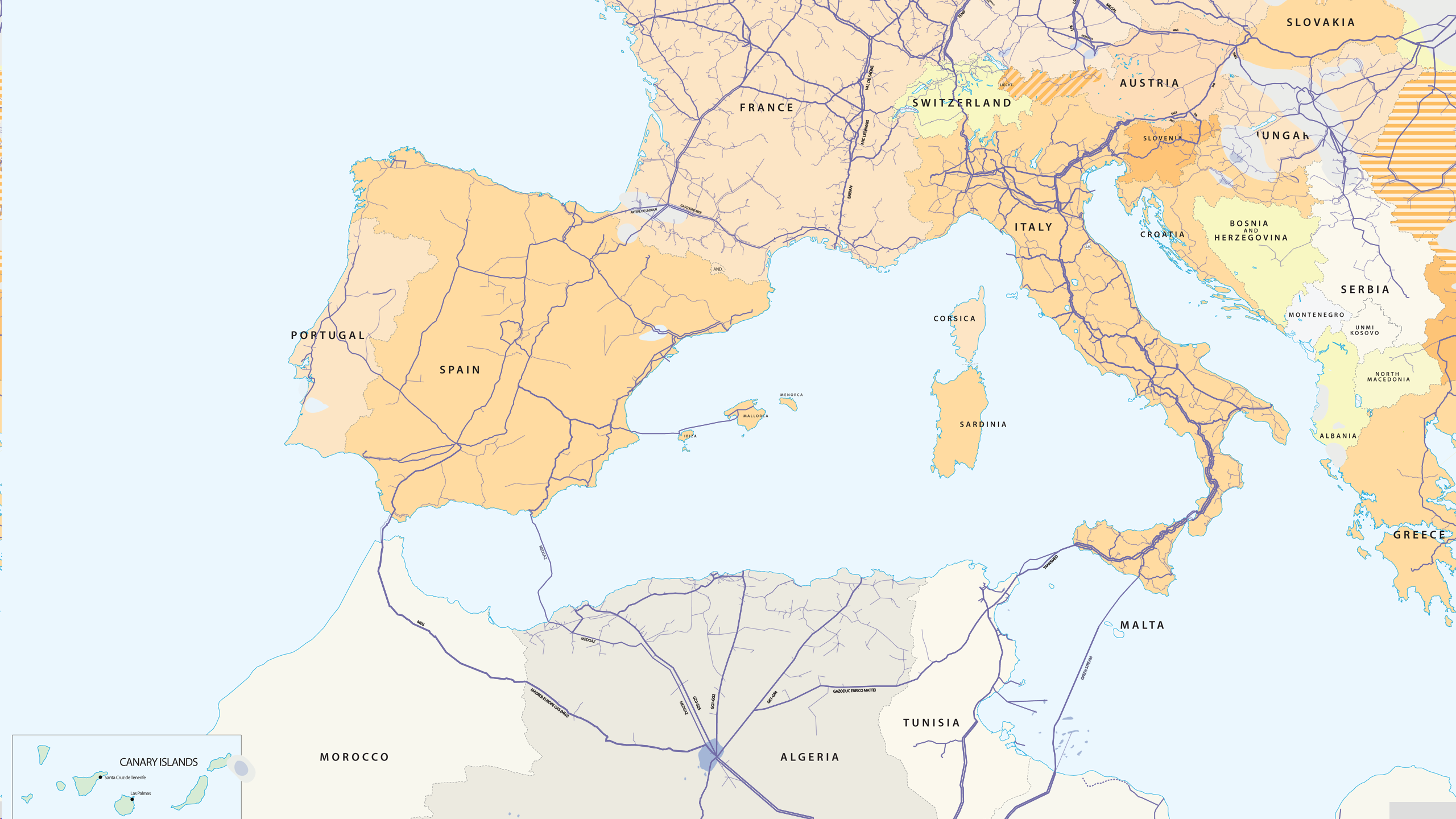 At that time, the gas that arrived in Spain through Morocco was supplied with the increased flow through the other gas pipeline that transports gas, in this case directly, from Algeria: the Medgaz. The Medgaz increased its flow to practically 100% of its capacity. In addition, the entry of liquefied natural gas (LNG) into Spain also increased, which is its main source of gas supply, unlike the rest of European countries, which barely have LNG regasification capacity. 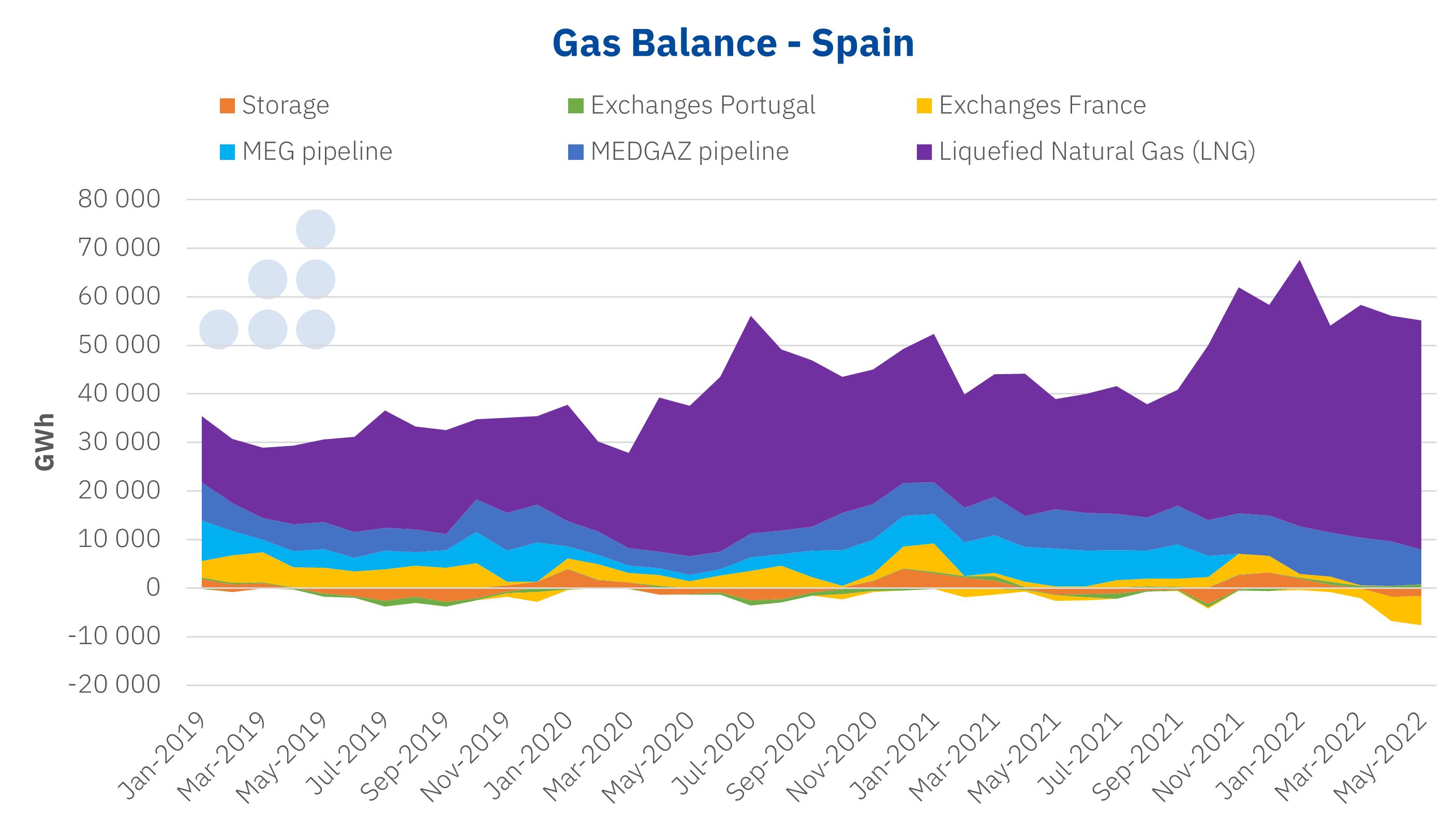 Negative values indicate gas exits from the system, either for exports or for storage filling.
Source: Prepared by AleaSoft Energy Forecasting using data from ENTSO-g.

The increase in the arrival of LNG by ships at Spanish terminals, which practically doubled since October, made the United States, where most of the LNG comes from, become the largest gas supplier to Spain, with a 35% share in the first four months of 2022.

Another consequence of the progressive decrease in gas from Russia to European countries has been the increase in gas exports from Spain to the rest of the continent through France. Spain’s large LNG regasification capacity makes it one of the best alternatives to gas supplied by gas pipelines from Russia. Gas exports to France through the two gas interconnections through the Pyrenees reached historical records in recent months.

The European Union is aware that the drastic reduction in gas supply from Russia may put the supply security at risk during the coming winter. For this, all countries are filling their gas reserves as much as possible to face next winter 2022‑2023 with the greatest possible guarantees.

To date, the amount of gas stored by the countries of the European Union represents 52% of the total capacity. Poland and Portugal are the countries with the fullest gas reserves, both at 96% of their capacity, followed by Denmark, with 74%, and the Czech Republic and Spain, both with 69%.

Meanwhile, gas prices in Europe’s benchmark Dutch TTF hub are registering the highest and most volatile prices in their history. Prices started the year 2021 around €20/MWh. Since then, they began an exponential upward trend and ended December with a monthly average of €112.99/MWh and the historical maximum until that moment of €174.72/MWh on December 22. 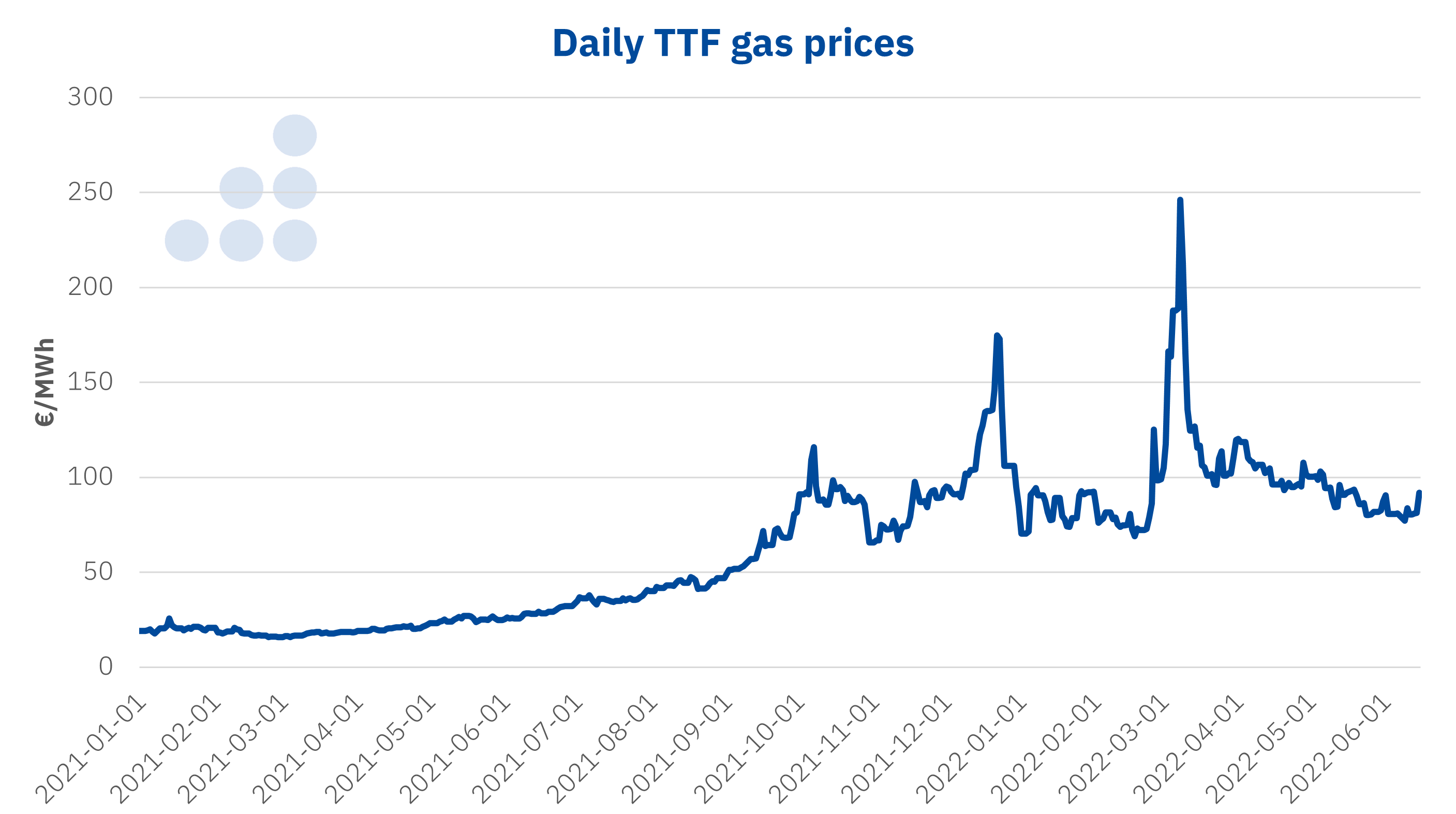 During the first half of 2022, prices have fluctuated with great volatility. On March 8, a few days after the Russian invasion of Ukraine, the TTF gas set its historical record to date, of €246.16/MWh. Since then, prices have fluctuated with each new piece of news about the expansion of sanctions on Russia and with each announcement of a supply cut by Russia to a European country.

The role of green hydrogen as a substitute for natural gas and as a fuel of the future in the energy transition will be the main topic of analysis in the next edition of the monthly webinars organised by AleaSoft Energy Forecasting and AleaGreen. The webinar will take place on July 14 and will include the participation of Africa Castro, in charge of Business Development at H2B2, an expert company in hydrogen projects. As usual, the current regulatory issues of the Spanish electricity sector and the prospects for energy markets in Europe for the next quarters will be analysed.

PrevAnteriorEuropean electricity markets respond with falls to the increase in solar and wind energy production
SiguienteNatural gas, the non-rechargeable battery of the present. Green hydrogen, the battery of the futureNext
Facebook-f Twitter Linkedin Instagram