Generalised increase in the European electricity markets prices due to the demand, the gas and the CO2

AleaSoft, August 31, 2020. The prices of all the European electricity markets rose in the last week of August due to the increase in demand and in gas and CO2 prices. The decline in solar energy production in most of the markets was another factor that favoured the increase in prices. However, the wind energy production increased in all markets except in Spain. In the first week of September, the markets prices are expected to continue with this growing trend.

The solar energy production during the week that began on Monday, August 24, decreased in most of the markets analysed at AleaSoft. In the German market it fell by 21%, in the French by 10% and in the Italian by 6.6%. In the Iberian Peninsula, the production with this technology was similar to that of the previous week.

For the week of Monday, August 31, the AleaSoft‘s solar energy production forecasting indicates that there will be a decrease in Spain and Italy, while an increase is expected in the German market. 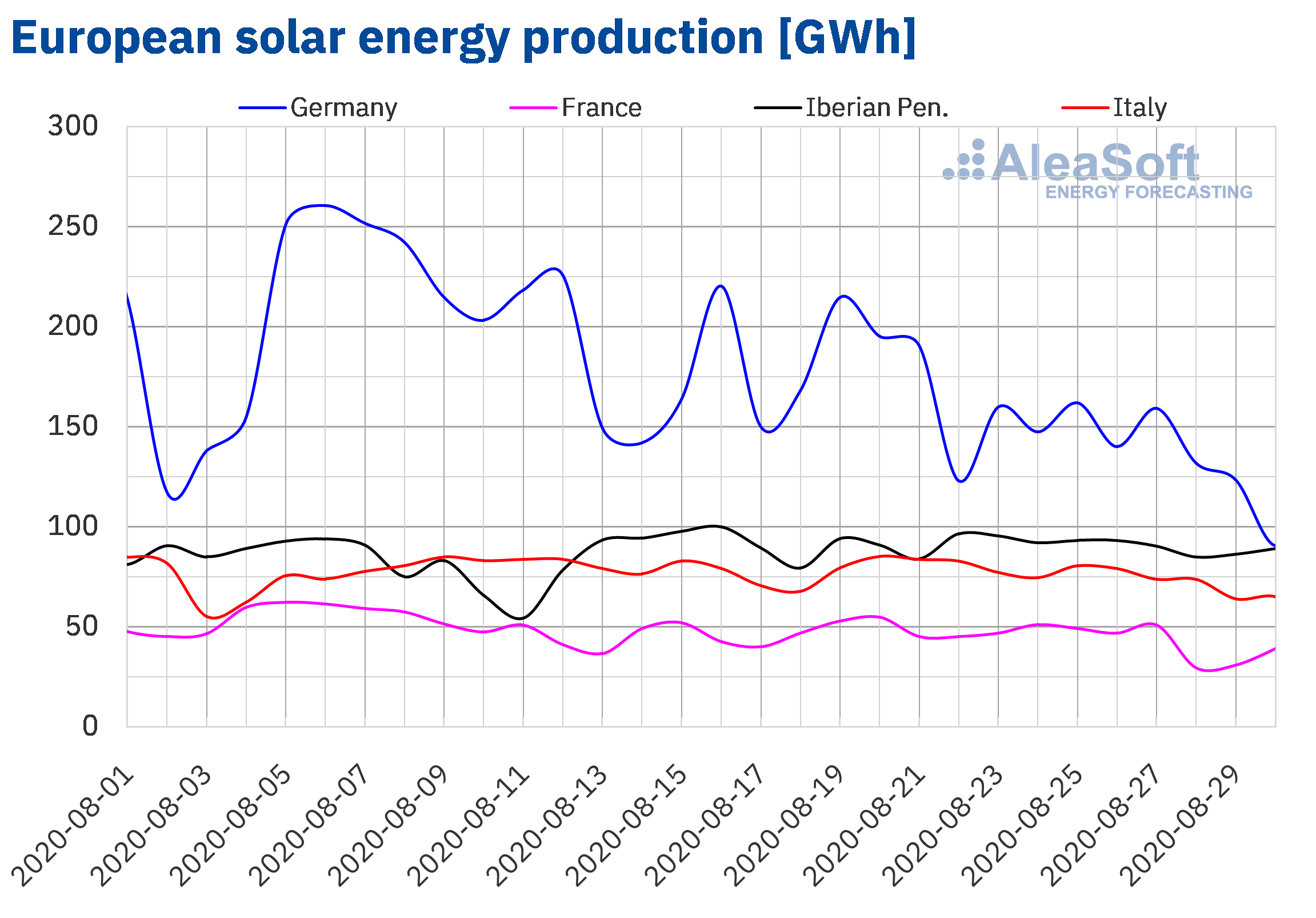 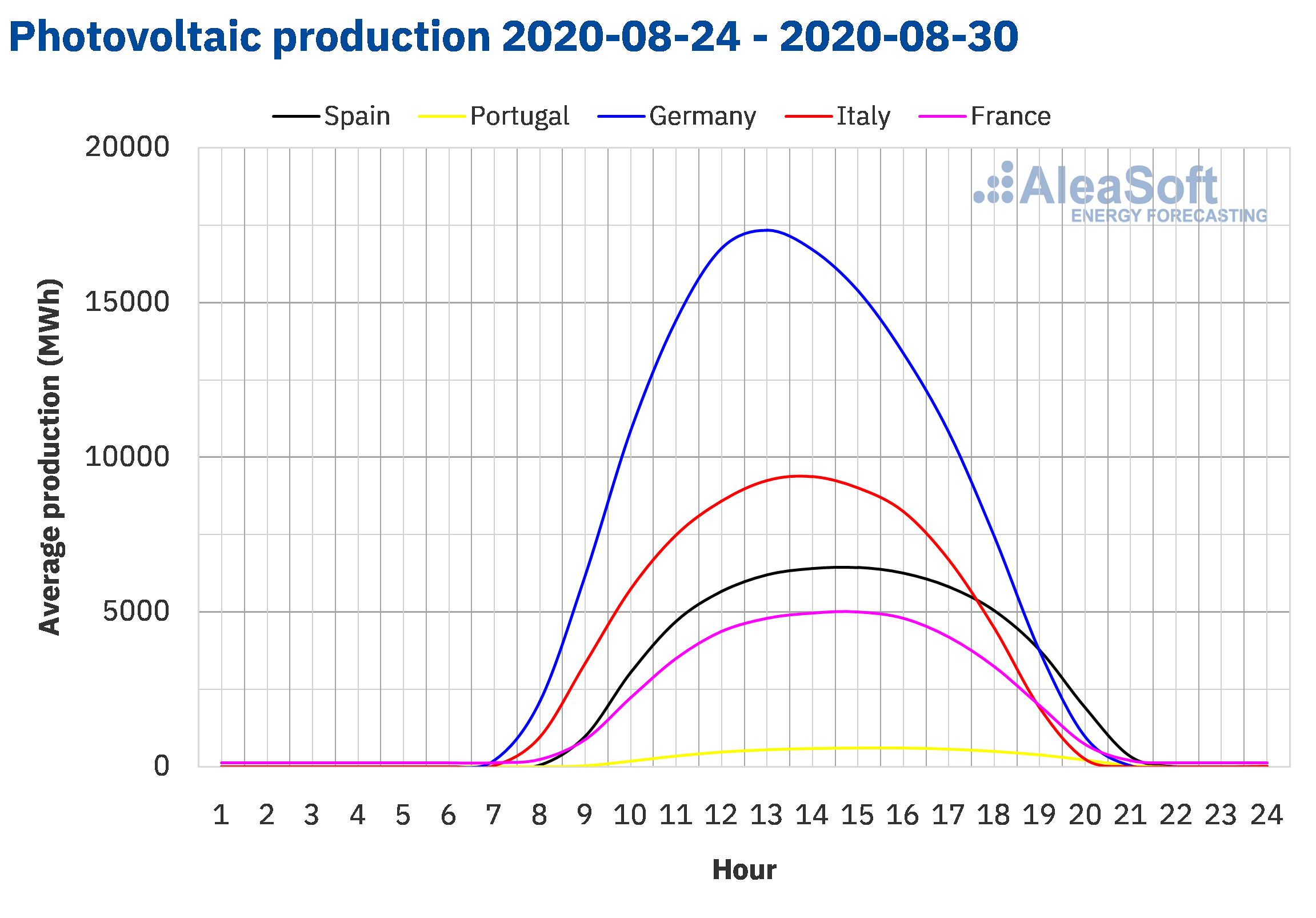 For the first week of September, the AleaSoft‘s wind energy production forecasting indicates a reduction in production in all the analysed markets. 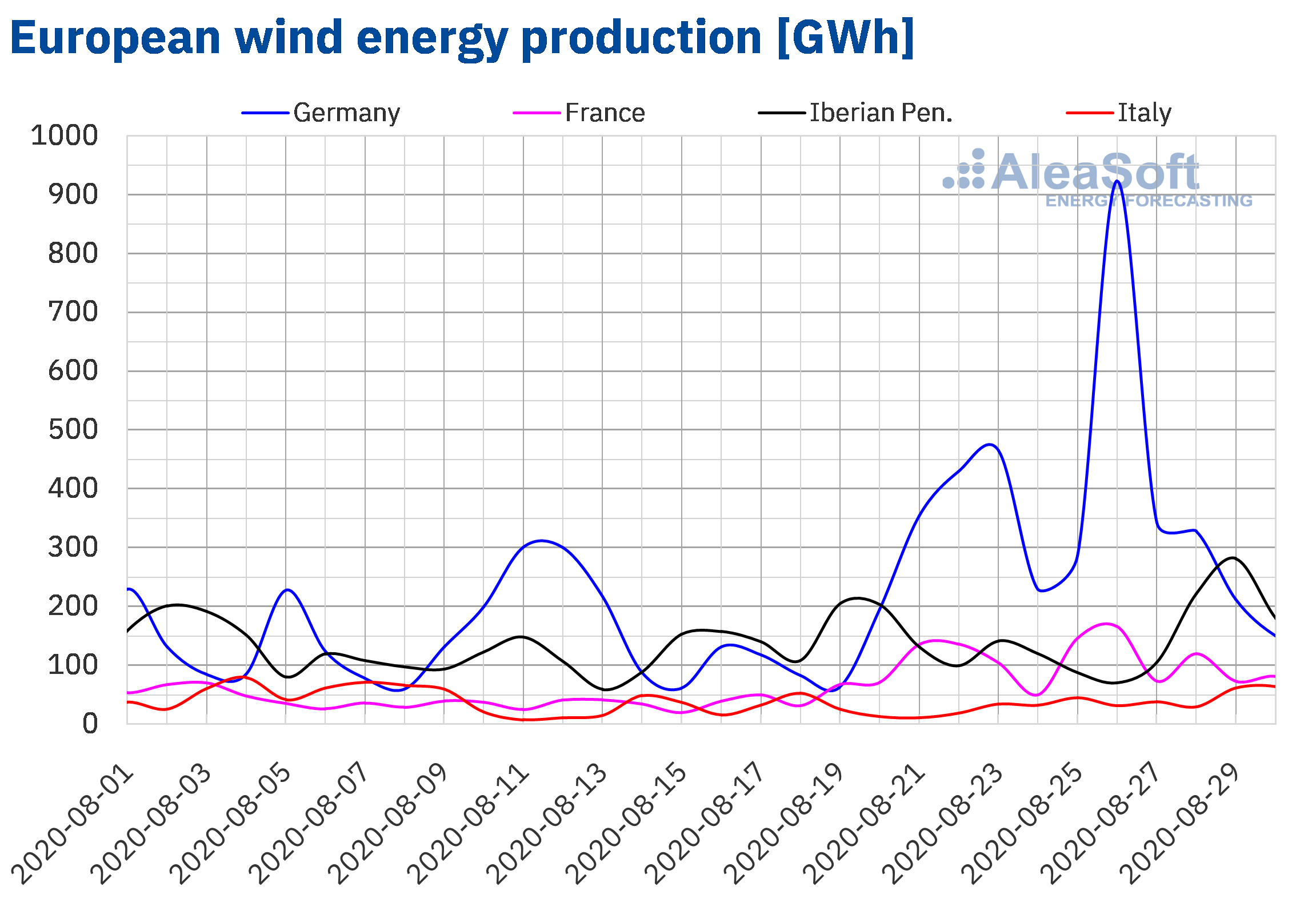 During the last week of August, the electricity demand increased in most European markets compared to the third week of the month. The increases were between 2.4% in France and Great Britain and 11% in Italy. This increase in demand was mainly due to the reactivation of the labour activity after the holiday period and despite the drop in temperatures during the weekend throughout Europe. In the case of Spain, the arrival of a polar air mass lowered the temperatures in some regions to 10 °C below normal for August in those areas. On the other hand, in the markets of Germany, Belgium and the Netherlands, the demand decreased between 0.4% and 2.7%. These markets registered the greatest drops in temperatures compared to the previous week, with differences of over 4 °C.

The AleaSoft’s demand forecasting for the first week of September indicates a decrease in demand in most markets due to the fact that the temperatures will continue to be less warm in Europe during this period. The exceptions will be Portugal, Belgium and the Netherlands, where the demand is expected to be similar to that of the last week of August. 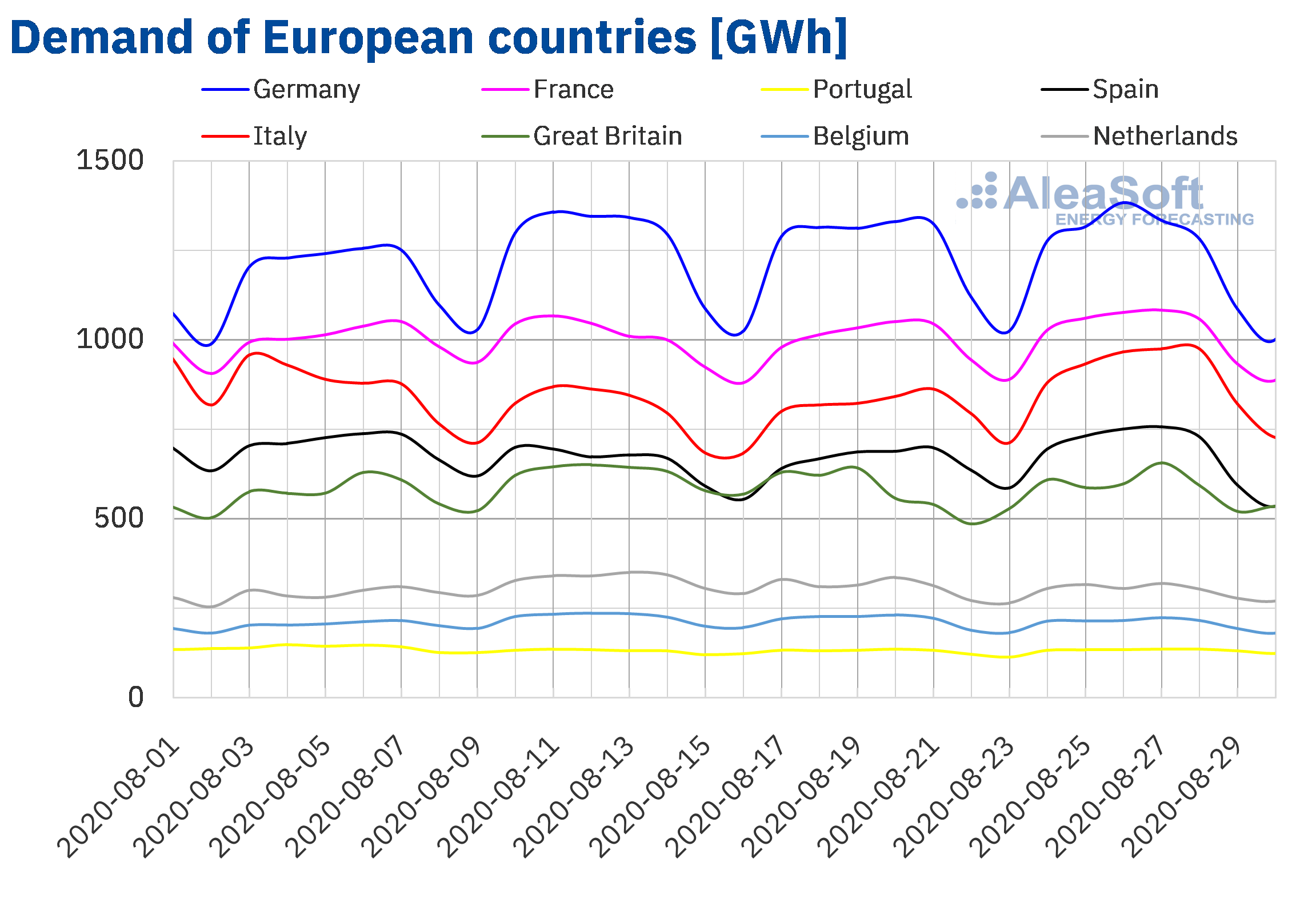 During the week of August 24, the prices were higher than those of the previous week in all the analysed European electricity markets. The market with the highest price increase, of 62%, was the Nord Pool market of the Nordic countries, followed by the EPEX SPOT market of France, with an increase of 21%. The market where the prices rose the least, by 9.7%, was the IPEX market of Italy. In the rest of the markets, the price increases were between 11% of the MIBEL market of Portugal and 17% of the N2EX market of Great Britain.

In the last week of August, the European electricity market with the lowest average price, of €16.11/MWh, was the Nord Pool market. The rest of the analysed markets had weekly averages above €36/MWh. The markets of Great Britain, Italy and France reached the highest values, of €46.04/MWh, €44.24/MWh and €41.04/MWh respectively.

As for the daily prices, during the week of August 24, most European markets exceeded €40/MWh some day and, in general, they remained above €30/MWh. However, the Nord Pool market, although it maintained an upward trend throughout the week, remained below €20/MWh, the lowest price, of €12.76/MWh, being that of Monday, August 24. In addition, on Wednesday, August 26, the price in the German market was also below €20/MWh. On that day, the prices of the Netherlands and Belgium were below €30/MWh.

Instead, the highest daily prices were reached on Thursday, August 27. On that day, the prices exceeded €50/MWh in the markets of Great Britain, France, Belgium and Italy. The highest price was that of the N2EX market, of €61.84/MWh. In that market, they also exceeded €50/MWh on August 24.

Regarding the hourly prices, the highest were those of the British market. The maximum hourly price of the fourth week of August, of €110.64/MWh, was reached at the hour 19 of Thursday, August 27. On the other hand, the minimum price of the week, of ‑€3.82/MWh, corresponded to the hour 16 of August 26 in the German market. 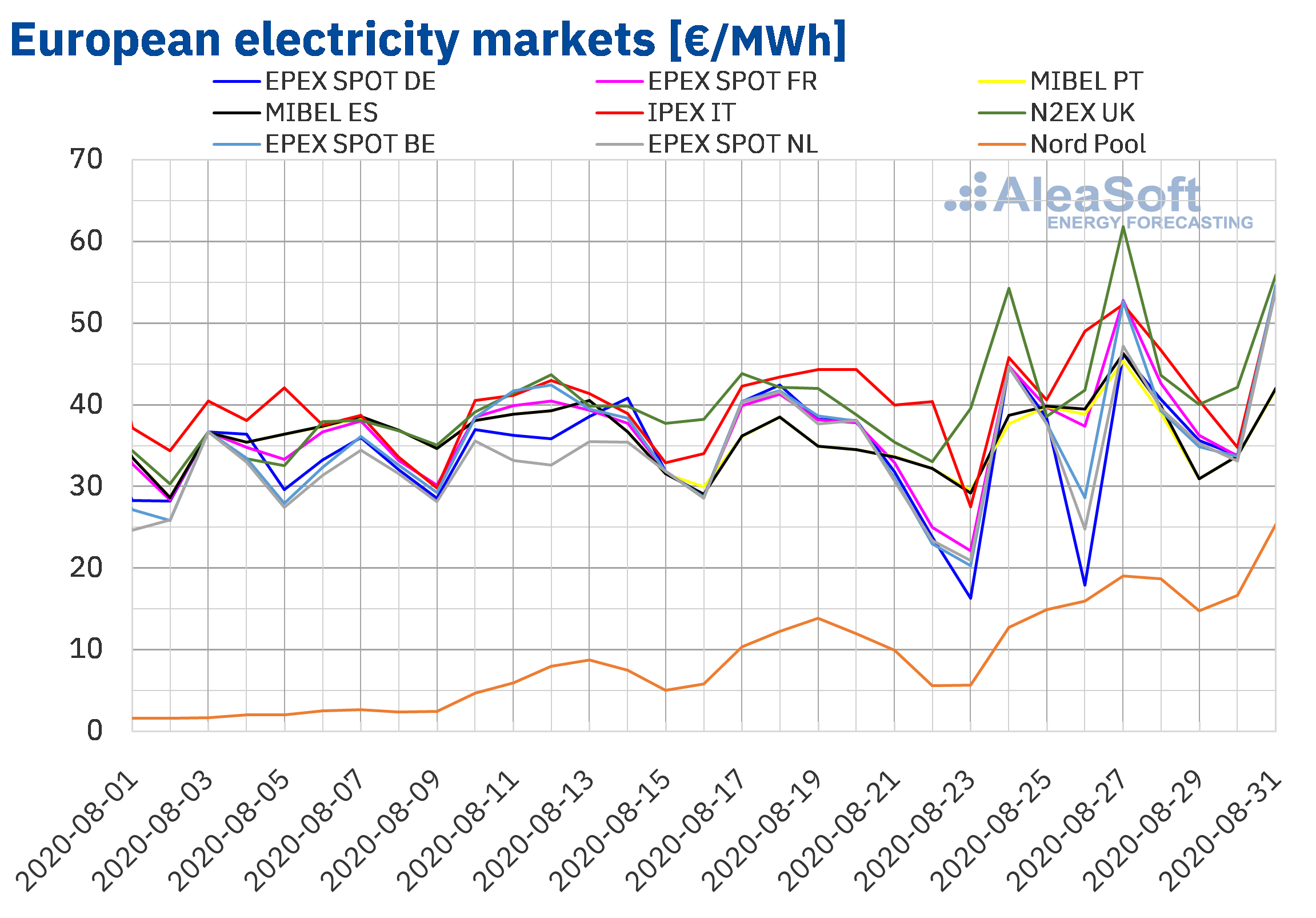 The increase in demand in most markets, the decline in solar energy production in most of Europe and the recovery in gas and CO2 prices favoured the price increases in the European electricity markets in the week of August 24. 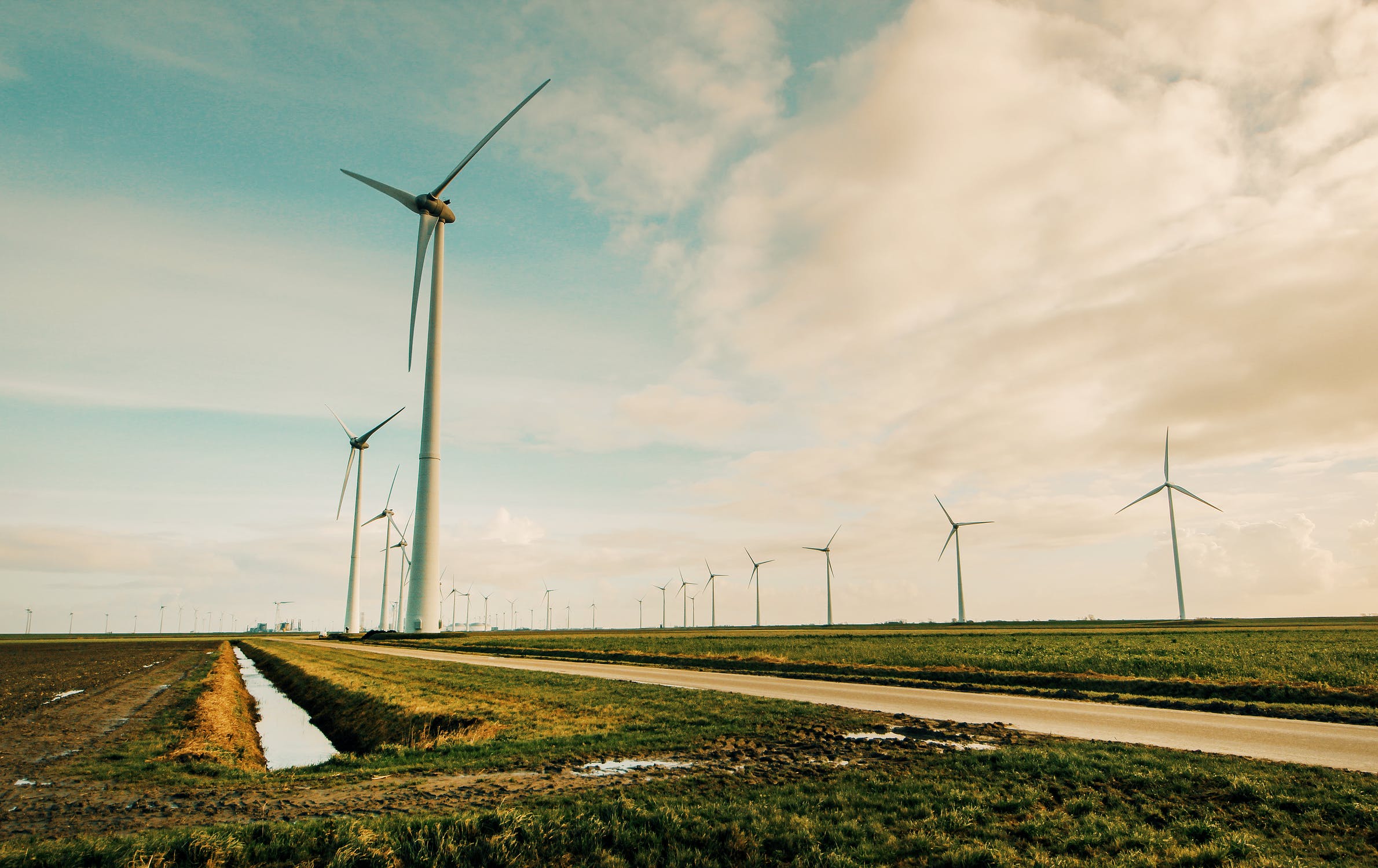 The AleaSoft’s price forecasting indicates that the week of August 31 the prices will maintain the upward trend in most European markets. The general decrease in wind energy production will favour this behaviour.

During the week of August 24, the European electricity futures markets prices registered a general increase for the product of the fourth quarter of 2020. The EEX and ICE markets of Great Britain registered variations of 9.8% and 9.6 % respectively, these being the markets with the lowest increases among the markets analysed at AleaSoft. The rest of the markets registered increases of more than 10% with respect to the settlement prices of the session of August 21. The ICE market of the Nordic countries was the one with the greatest variation, around 22%, followed by the NASDAQ market of the same region.

Regarding the electricity futures for the product of the next year 2021, a similar behaviour occurred. In this case, the EEX market of Spain was the one with the least change in prices, with a 5.9% increase. The OMIP markets of Spain and Portugal were the second and third with the lowest variation, of 6.2% and 6.1% respectively. In this product, the ICE and NASDAQ markets of the Nordic countries were those with the highest increase, of 13%.

The Brent oil futures prices for the month of October 2020 in the ICE market began the week of August 24 with a recovery of 1.8% compared to the price of the session of Friday, August 21, reaching a settlement price of $45.13/bbl. The rest of the week, the prices remained stable with values slightly above $45/bbl. The maximum settlement price of the week, of $45.86/bbl, was registered on Tuesday, August 25. This price is the highest since the beginning of March.

During the fourth week of August, the fears of a decrease in demand due to the increase in COVID‑19 cases were offset by the decrease in production in America due to hurricanes Marco and Laura. However, with the improvement of the weather conditions, the recovery in production levels might have a downward influence on the Brent oil futures prices.

Regarding the TTF gas in the spot market, the week of August 24, the prices followed an upward trend, with the exception of Friday, August 28, when the price fell by 1.4%. On the weekend of August 29 and 30, the maximum index price of the week, of €9.63/MWh, was reached. This price is the highest since the second half of February.

As for the CO2 emission rights futures prices in the EEX market for the reference contract of December 2020, during the fourth week of August, they had a generally upward behaviour. On Friday, August 28, the maximum settlement price of the week, of €29.52/t, was reached. This price was 15% higher than that of Friday, August 21, and the highest since the first half of July. The news of Friday, August 28, about the expansion of the nuclear maintenance shutdowns in France contributed to the increase in prices of the CO2 emission rights and the gas. 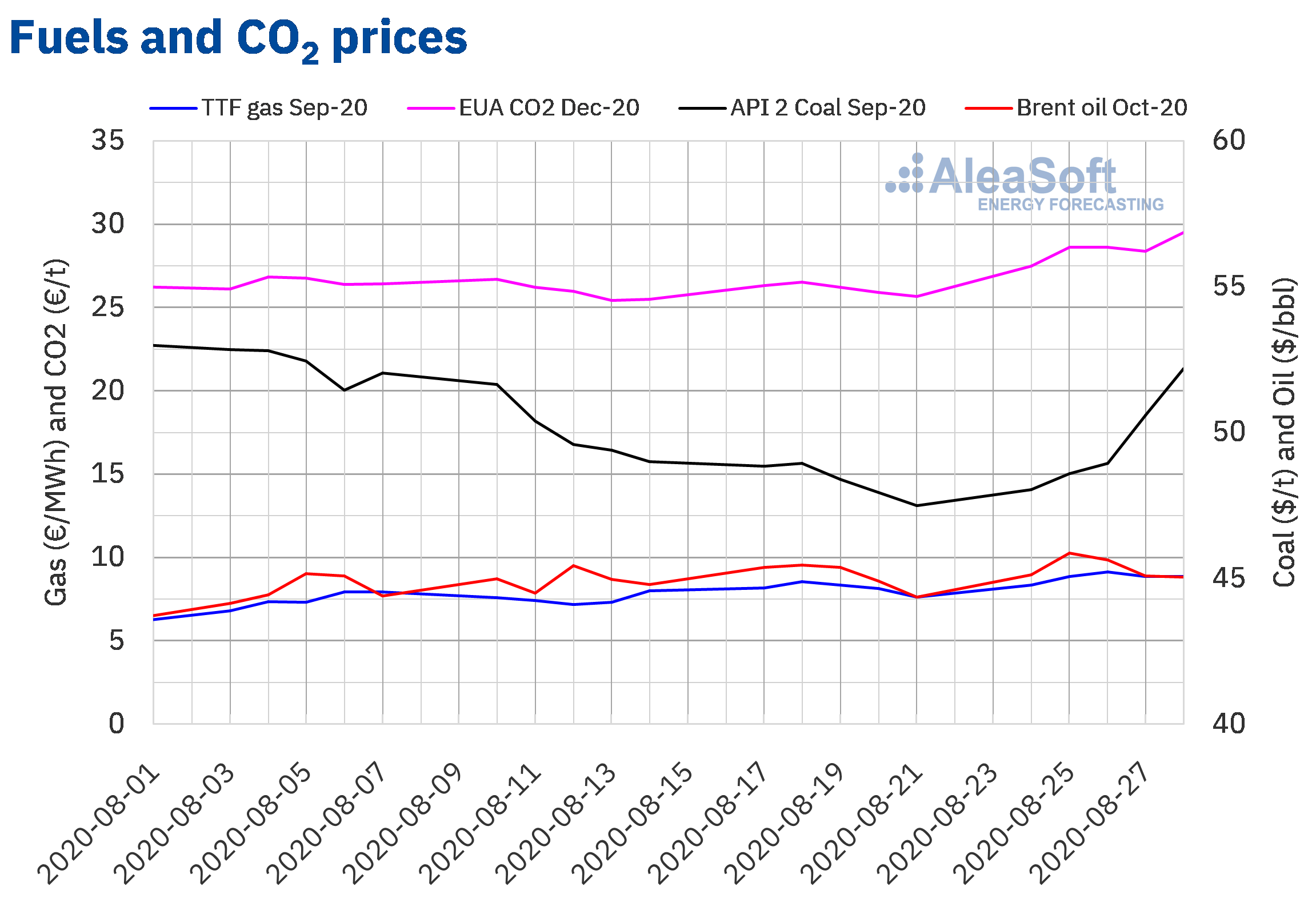 The COVID‑19 pandemic generated a lot of uncertainty in all areas: personal, financial and, obviously, also in the energy markets. The arrival of September and the return to the schools in person, the proximity of autumn, when the coronavirus will coexist with other viruses such as that of the flu, the fact that in summer, with high temperatures and with the schools closed, there were outbreaks, they only strengthen this uncertainty. The AleaSoft’s forecasting helps to navigate in these uncertain times. This forecasting is periodically updated taking into account the recovery scenarios from the economic crisis that the pandemic generated.

In order to provide information to all agents of the energy sector, at AleaSoft the series of webinars “Energy markets in the recovery of the economic crisis” is being organised, where the evolution of the markets and the financing of the renewable energy projects during the coronacrisis, as well as the prospects in the current situation of uncertainty will be analysed. Another issue that will be addressed is the importance of the forecasting in the audits and the portfolio valuation. This series of webinars is divided into two parts, which will take place on September 17 and October 29, and will feature speakers from Deloitte, Engie, Banco Sabadell and AleaSoft.

In addition to the webinars, the observatories are a tool that allows analysing the evolution of the main European electricity, fuels and CO2 markets and that is very useful to know the behaviour of the main variables in these times of uncertainty. The observatories include daily updated information that is visualised through comparative graphs of the last weeks.

PrevAnteriorInterview of pv magazine with Antonio Delgado Rigal, ceo of AleaSoft
SiguienteIn August the European electricity markets prices recovered although they continue without reaching the levels of 2019Next
Menu
Facebook-f Twitter Linkedin Instagram